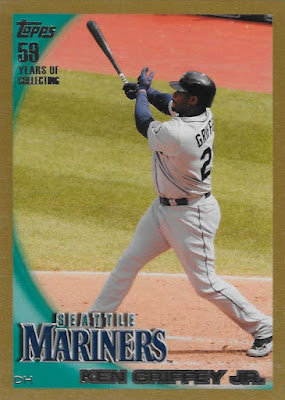 We've been doing the month-long theme thing for a while now, but this one's going to be a little different. It will be the first month themed after every offering by a specific brand over the course of the entire year. For most of the '90's and deep into the 2000's such a feat would be highly impractical given the cornucopia of inserts and parallels and sub-brands from that time not to mention the fact that Griffey was in, like, all the sets (and yet still not enough). Four posts probably wouldn't cut it.
But by 2010 Junior's career was winding down, and he just wasn't popping up in many inserts. There are still plenty of base parallels because all the brands were doing it that way by this time, so there's no shortage of Griffeys to chase; but this late in the game it's a trade-off from a whole lot of different inserts and relic cards to essentially many different versions of base cards.
So by the end of the month we will have addressed every Griffey card Topps gave us in 2010. Isn't that fun?
Today is Part 1 wherein we will cover the Griffeys from 2010 Topps Flagship, Update, Opening Day, Team Sets, and 2015 Cardboard Icons. With the exception of a single insert this post is comprised almost entirely of different versions of three base cards.
2010 Topps was pretty standard for its time in just about every way save one: it contained Griffey’s sunset card. And for any given player there’s no more official a sunset base card than their Topps one (Upper Deck is a close runner-up when it comes to Griffey being that the brand literally and figuratively paralleled his career, but let’s face it – Topps is the standard when it comes to baseball).
And being that this is a modern Topps base set we are dealing with, there will be LOTS of multi-colored parallels (and not so many inserts) to look at. So, spoiler alert: prepare to see the same card over and over in different colors.
I do wonder whether Topps would have chosen this photo had they known this would be Griffey's sunset card. There was a time when I really didn't care for this image - it's a funny angle and a bit far-away and impersonal - but it has grown on me. It seems he connected on this swing and is watching the ball fly over the right-field wall. Or at least I hope that's what happened.
Junior homered *only* 19 times in 2009, and being that this is an away game at an outdoor stadium in the afternoon and we get a sliver of field/backstop for reference, I'm assuming someone better at navigating baseball-reference.com may be able to deduce what home run this was, if any? Anyone up to the challenge? I'd sleep better knowing his sunset card features him belting a bona-fide dinger.
One funny thing about this card is that 2010 was the first year Upper Deck was barred from using MLB team names and logos (they did anyway, and I seem to remember they got in some trouble for it?). So what does Topps do? Go full-on petty and print the BIGGEST TEAM NAME EVERRRR all done up in team colors and official fonts and emblazoned on the front of EVERY CARD.
For reference here is his base card from just the year before: 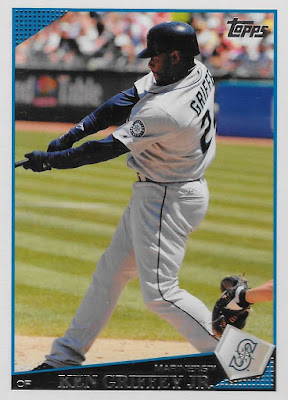 LOL yeah, that would be the team name/logo version of a whisper, all tucked away in the corner, practically an afterthought. We see what you were up to, Topps. I'm not faulting you for it (it's pretty funny), but don't think for a minute you're gonna sneak that by us. 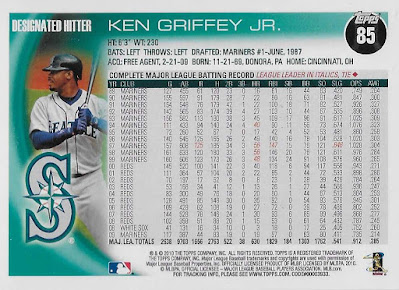 Nothing surprising here. Not even that BIGGEST LOGO EVER to grace a card back. I repeat: it's on the BACK. What?
Just to be sure, here's the card back from the previous year: 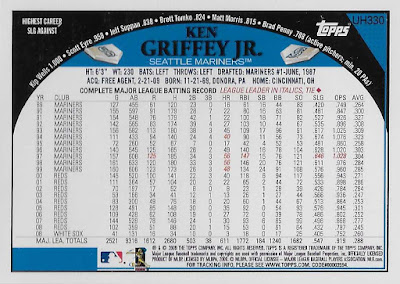 You almost need a magnifying glass. You cheeky, Topps. I like you.
Wal-Mart blasters included the "All-Black" parallel which delivers precisely what it promises with the added bonus feature of showing everyone just how dusty a scanner bed can get. 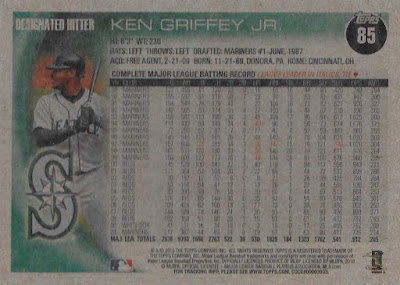 In later years the "exclusive" colored parallels would be blue for Wal-Mart and red for Target, but the All-Black vs Throwback is so much better. Also Target definitely got the better end of the exclusivity deal because these throwback parallels are hella-coolz while the black is only meh-balls. The high points are the "umbrella" Topps logo on the front and super-high print quality on the old school brown card stock on the back. I really dig this parallel. Target wins. 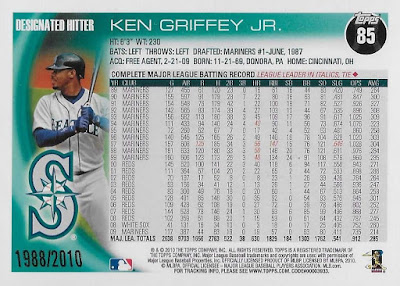 Some things never change and never need to: the gold parallels are perfect just the way they are every year. OK, maybe I would prefer gold foil numbering, but it's not a deal-breaker. Despite the huge print run prices for these have been steadily climbing in the last couple of years.
I am super excited about this part. Today we have a first for The Junior Junkie: a guest blogger! Those of you who follow the Griffey groups on social media probably already know him, and some of you have probably already guessed who it's going to be. Ladies and gentlemen, I give you the Lord of 2010 Topps, Josiah Karpenko:
One specific card that is incredibly rare to find is the regular Topps variation, factory red /299. Only found in the national factory set, each set contained one 5-card pack of red /299 parallels.
Not only does this mean you had to buy entire sets just to search for the Griffey, or that there are other complete sets you could buy that don't have the 5-card red packs, but also taking into account that there are so many collectors who buy sets and never open them.
So while it may be /299, the odds of actually owning one are extremely slim.
There you have it - straight from the expert. Josiah is a supercollector of Griffey's sunset Topps base card as you will see, so we are going to hear a lot more from him.
The Black parallel, perennially numbered out of whatever anniversary year it is for Topps, are tough gets and highly condition-sensitive. Josiah's PSA 9 is the highest-graded specimen with a population of 3 and none higher. I used to not pay too much attention to pop reports, but the way the market is right now they're tough to ignore.
This is where I would put the Platinum 1/1 and the four printing plates, but neither I nor Josiah have any to show you. That said, if you own any of these cards, please reach out. JK needs them, and we're all rooting for him to get them all...
I don't know where Topps got the idea to print the cards on silk and encapsulate them like this, but I do like them. They remind me of those graphic tees you buy on Wish or Amazon whose prices are too good to be true, and then it arrives five weeks later from China in that crinkly clear plastic bag, and they end up being that weird silk material that you would never, ever wear in public, and so you learn your lesson and never buy one again. No way I'm the only one that's happened to. 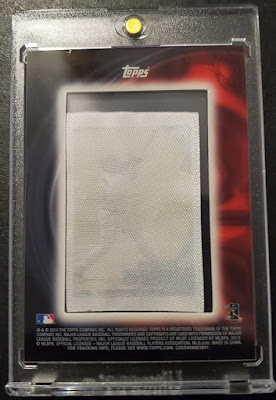 Stats would be utterly unreadable on this material and in this size, so fine. Let it slide.
OK, before moving on to the remaining 2010 Topps Flagship, I would like to show you a few more versions of this 2010 sunset base card: 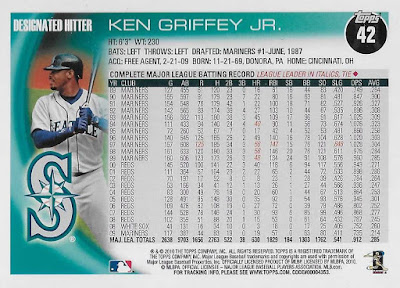 You know the drill: no foil + patriotic logo = Opening Day. 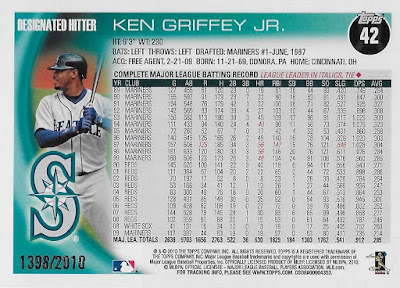 I never really got into Opening Day. I do miss having a low-price option when buying packs (you know, back when you could actually find packs in the stores - waaaay "back in the day"), but I was always more of an Update guy. Opening Day's lone parallel (apart from the printing plates) is attractive enough, but I could take or leave it.
Topps also released these Team Sets which are identical to the flagship base card only with team-specific numbering. I borrowed this card back image being that my Mariners team set is sealed and is going to stay that way. 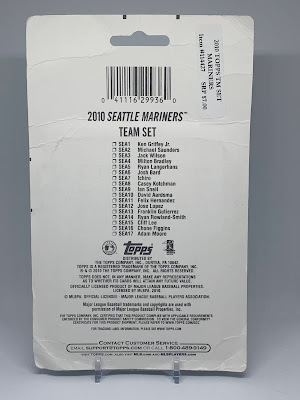 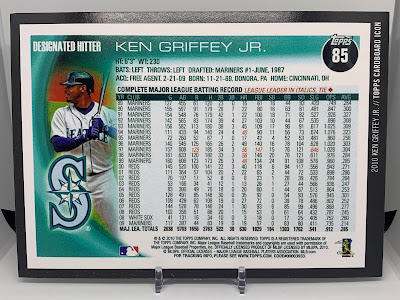 Topps sold these sets through their website in three colors, and I bought all three of them. 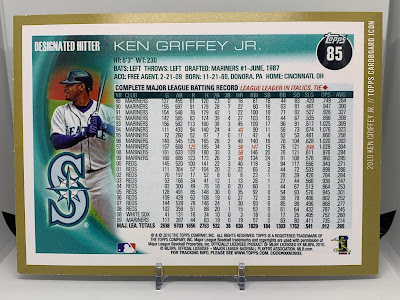 I actually broke up the red set to help Josiah on his quest (and forgot to take a scan before mailing it - derp), but I kept a few favorites. There was a jumbo of the 1995 Star Power subset in there. Whichever Topps employee made that call has a big wet kiss coming their way... 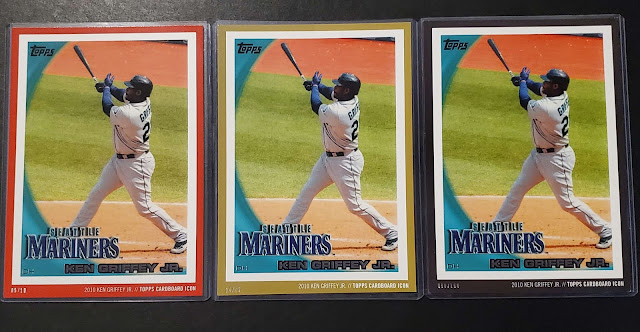 OK, back to 2010 Topps flagship. Griffey has two more cards in the base set, both of them Team cards for the Mariners. This first one is part Team card and part Manager card, and a cameo it is not. 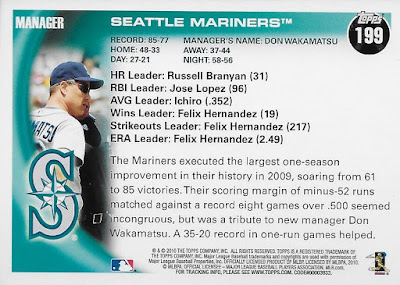 If it said "Ichiro" where it says "Seattle Mariners," it would be a cameo. I really love this one as it shows The Kid having some fun near the end of his career with his heritage team. Also, no hat and no helmet. That's rare... 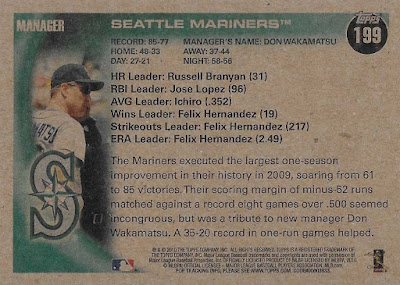 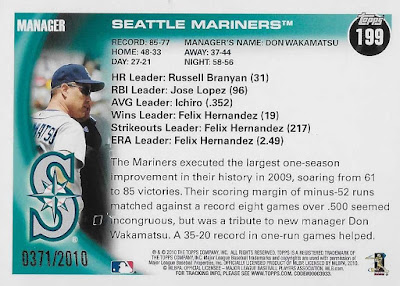 That's all I have so far - the rest are all colored parallels or press plates. Still, we aren't done: here comes the other Mariners Team card, "Franchise History:" 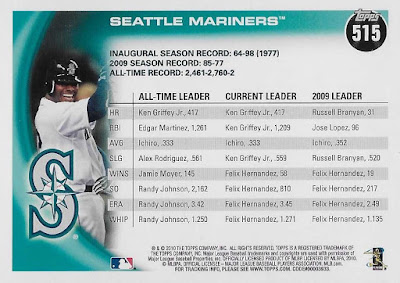 A fun shot of Junior having a moment with Ichiro. And the back gives us a nice profile of Junior's success gut. How do you not love this guy?? 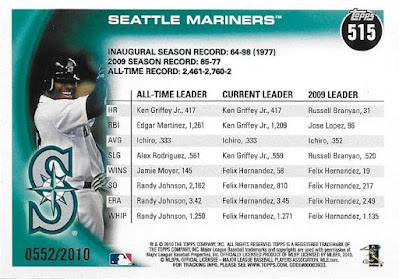 Framed in gold, right where a heart-warming photo like this belongs. 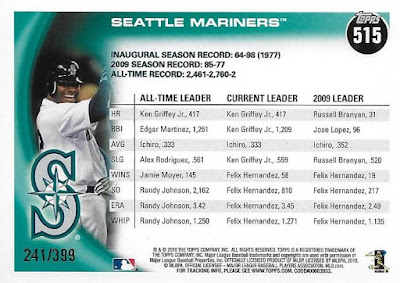 These Copper jobbers could be found in Wal-Mart Value boxes, but they only appeared in Series 2, so this one is the only Copper Griffey we need to worry about.
Now Griffey did make it into one and only one insert in 2010 Topps. As you will see over the course of 2010 Topps month, Topps wasn't really super all-about Griffey this year. I mean, I get it if you just go by the player's current production and not what the guy has done for baseball in general and your card brand specifically. Not my favorite decision, but again I get it. 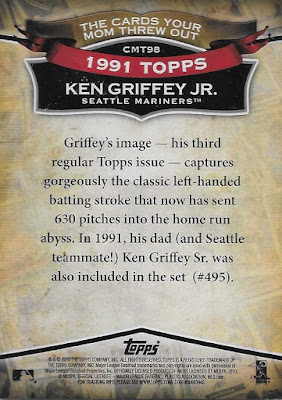 This is one of the coolest ideas for an insert I have ever seen. The name is cute and relatable and the designs super faithful to the originals, and at 1:3 everybody got a taste. Also it seems this insert started a trend from Topps flagship of tributes to the great Topps base cards of the past that continues in some form to this day.
There was even a parallel of this one that used the original backs:
I'm only showing the back as that is all that's different. These Original Back parallels fell 1:36 Hobby packs or one per box, and I'm a huge fan.
I’m going to shoehorn 2010 Topps Update into this spot because there are precisely TWO Griffeys to be had from that set, both from the continuation of this insert via Update: 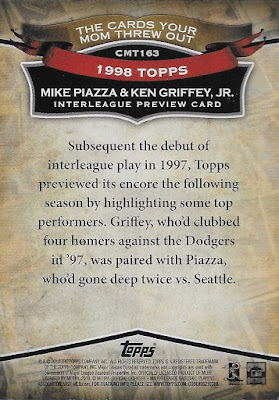