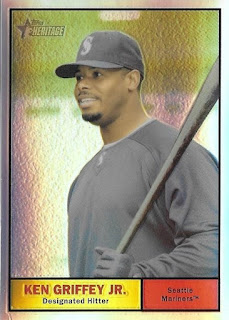 Heritage is awesome in the same way Archives is awesome: we get to see an officially-released card in an old Topps design we may otherwise have never gotten to see our player on apart from customs and oddballs. I seldom get excited about Heritage sets these days as they don’t do retired players – only current ones, so Griffey is never in the set. 2010 was the last time The Kid made an appearance, and as I got back into collecting in 2011 I’ve always avoided buying Heritage packs knowing full well there were no Griffeys to pull. 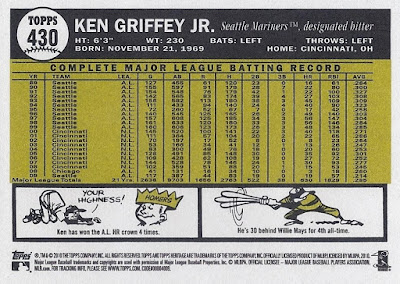 These were modeled after 1961 Topps, one of the tougher vintage set builds. Griffey’s card was short-printed - this is common for high-numbered Heritage base cards but rare for a Griffey base card. 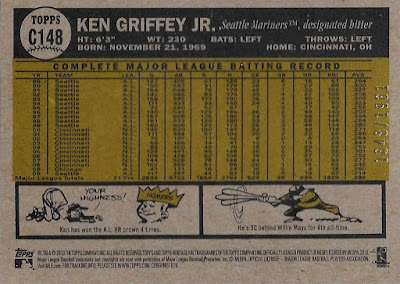 While most of the Chrome versions could be pulled from standard Heritage packs, the last 50 cards, including the Griffey, were actually seeded in 2010 Topps Chrome. I am putting them here as it makes more sense to me, but technically this is a 2010 Topps Chrome card. 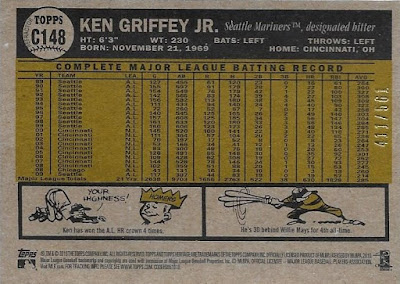 Far be it from me to pass up a perfectly good opportunity to use my beloved light box: 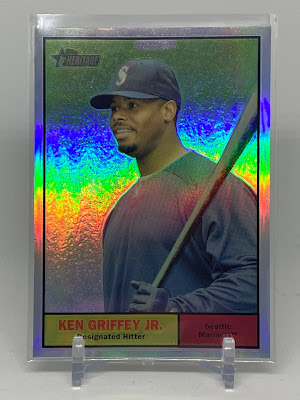 Mmmm that's the stuff... If you like this one you should see the black refractor numbered out of only 61. 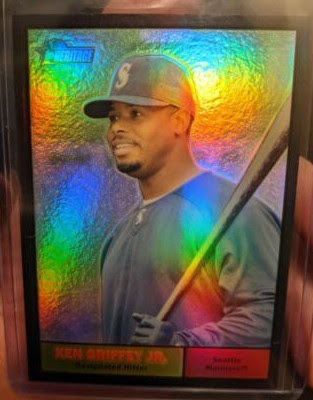 This would be a good example of how NOT to take a photo of a card you plan on listing on eBay for hundreds of dollars. It's a damn nice card, though, right?

These were the box toppers in 2010 Heritage, and as you can see they got really into stamps with this set. The bit along the bottom on the back suggests we should enjoy the baseball stamps pictured on the front which is something I would absolutely love to do. They look great if the picture is accurate, and I like where cards cross paths with other hobbies, especially coins and stamps.

And Griffey does appear in the Framed Stamps insert on two cards, each of which he shares with one other player, namely Zach Duke and Miguel Montero. Interesting pairings, I guess. Those cards are numbered out of 50 each and seeded at a spirit-crushing 1:193 packs (case-hit), so they're not easy pulls by any stretch; and given the choice I'd still prefer that black refractor over BOTH stamp cards. 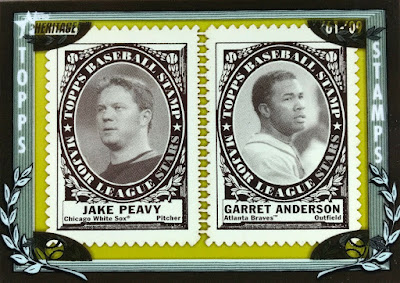 I was pretty intrigued by the stamp cards, so I bought one just to be able to show it to you folks here. It cost $17 shipped which is a lot for a blog talking point, but the box topper sold me and and I needed to experience these things for myself. 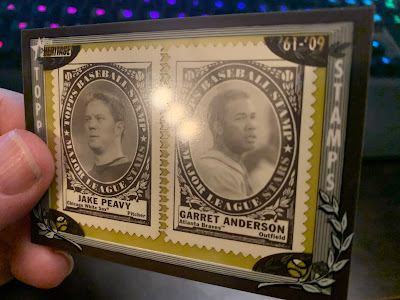 I expected the card to be thicker with a deep inset cutout to accommodate the stamps. What I got was a card roughly the same thickness as the regular base cards - maybe even a little bit thinner.  The whole front of the card is coated in clear plastic with black printing on the corners. The stamps are in there, and if there is any inset it is less than paper-thin. It's even a little hard to tell there are physical stamps in there as opposed to just images of stamps. In all it looks way more like a regular old card than I was expecting. 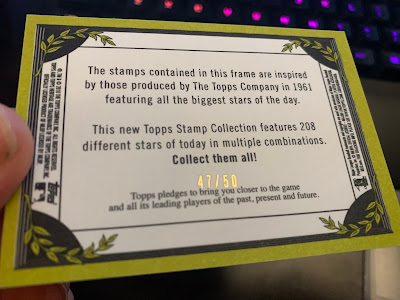 Now even if you bought a whole hobby box of this product (thereby guaranteeing a topper that requests your enjoyment of the stamps), there was still only a 1:8 chance of getting a single stamp card. So printing the equivalent of "Hey, enjoy collecting all these stamps we're throwin' atcha, Lucky!" is maybe getting our hopes up a bit? It's like when 1997 Pinnacle Zenith included those diamond protector cards in every pack despite the fact that next-to-nobody pulled the diamond parallels. Didn't you feel it just a little bit more when there wasn't a diamond? Do they really have to rub it in?

Maybe if the stamps were not meted out in random pairs (say, one stamp per card instead of arbitrary pairings), and numbered out of 200 instead of 50, then they could be a box hit and we could all have a shot at enjoying the stamp thing. A few tweaks and I bet this concept would have caught on a little more.

As for the topper itself the design is fantastic, but I hate storing big, awkward things like this; and yet did it make me want to find some stamps of my own? Yes, yes it did. Mission accomplished, I suppose.

Here are the Griffeys I need from 2010 Heritage:

Again those framed stamps things are bizarre as are the guys they chose to pair with Griffey. If it’s stamp cards you’re after, there are some very nice Griffey-centric philatelic offerings available including the 2015 Topps Coin/Stamp Birth Year insert set and the 2016 Update 500 HR Club Stamp relics.

I'm giving Topps the business over the stamp debacle, but overall I really do like 2010 Heritage. The '61 set is a personal favorite among vintage Topps designs (I treasure my 1961 Eli Grba and Coot Veal cards). And to be fair they did do the framed stamp thing again for the 2011 Heritage set, but there was no Griffey in 2011 Heritage (or any 2011 Topps product for that matter), so does it really even exist? Up for debate...

On to Triple Threads...

I want to talk a bit about the base cards and their parallels from recent super-premium Topps sets. I have nothing against them as cards, but I do not chase them for a few reasons: First, they are thick as kingdom come, so they ruin binder pages. You pretty much have to store them in a box. Second, they all look more or less the same whether they come from Triple Threads, Tribute, or Tier One. As all these brands start with a “T” and the brand logos are often just big, stylized “T’s” it can be hard to tell what you have until you flip the card and squint to read the set named in the legalese box at the bottom. And finally - let’s be honest - these are the lowest cards on the totem pole in terms of pulls, and they’re only there to take up space between the relic hits which is why people buy these products to begin with.

That doesn’t mean all recent Super-Premium base cards from sets like these are bad. There are a few exceptions such as 2012 Tribute (above) which happens to be very pretty (it reminds me of 1993 Flair). But I know zero people who are tripping over their own feet to land the rainbow (although I’m sure y’all are out there). Maybe if you're lucky enough to start with the 1/1 you may be motivated enough to chase down the rest, but that's it.

With all that out of the way, let’s look at the base card from 2010 Triple Threads as that is the only Griffey we got from this set (that’s right – no triple, no threads).

I really appreciate the effort he’s giving in this image. This is a man who just swung his whole butt off. You can practically hear the grunt in this photo. 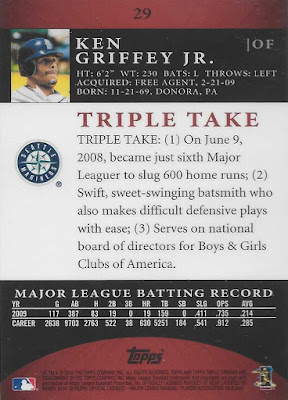 There is one aspect I like here, and that’s the texture. Topps mixed gloss with a soft matte coating here for a card that’s at least a little interesting to handle. Not sure it makes up for the total lack of Griffey hits, but it’s something…

Here are the Griffeys I’m missing from 2010 Topps Triple Threads:

Many of these are around and for reasonable prices, but there are just so many better cards to chase. And about that platinum? It's gray. Flat, plain, concrete gray. This is especially biting as Triple Threads hits tend to be extremely cool. Seriously, why even put the guy in the base set if you're not going to give us any hits?? Nobody is building this base set. Just be real with us and leave him out entirely next time...

Three 2010 Topps sets left, and while I did a lot of bitching and moaning in this post about stamps and pointless base cards, there are some reasonably cool sets still to come including one everyone seems to hate but I think is just great. Thanks for reading.