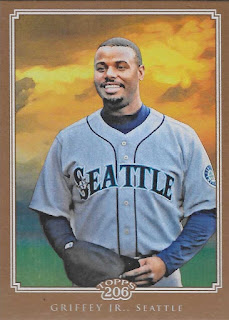 Three 2010 Topps sets remain that featured Griffey pulls, and only one of the remaining sets still exists in some form. Let’s start with that one: 2010 Topps 206.

My biggest complaint about the vintage nouveau movement in sports cards is that we as modern collectors have very little connection to these often ancient brands. Sets like Archives and Heritage are exceptions, but I know nobody who longs for the days of Goudey and National Chicle.

That said, T-206 is an exception; and we have Honus Wagner to thank for that. Even non-collectors know about this set, so I don't narrow my eyes quite as much at the reintroduction of this brand compared to some of what we’ve gotten in the last 20 years.

Obviously Topps 206 is based on the American Tobacco T-206 brand that included perhaps the most famous baseball card of all time: 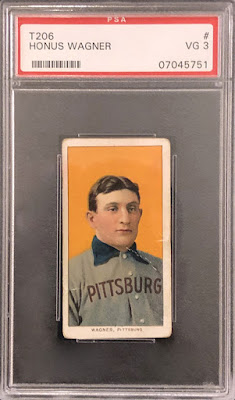 We all know the story and the history and the overblown auction prices (now surpassed by recent  rookies of modern stars from multiple sports), so I’ll save you that bit. I will say that I like the design of the original set and wish Topps had stuck more closely to it here.

Also this was not the first time Topps would make a 206 tribute set. They've been revisiting this concept since 2002. Pacific even got the jump on them by a few years with their PS-206 minis way back in 1999. Personally my favorite so far is the most recent: 2020 Topps 206; but that is not why we are here today:

The design similarities are there, mostly in the text. The stylized border breaks up the monotony here. Personally I’d have preferred to see Topps go all-in on the mini aspect for the sake of authenticity. Printing these in the standard card size takes away from that a bit. Topps has put out a much more satisfying 206 tribute set since this one - again, see the online-exclusive 2020 Topps 206 for reference. 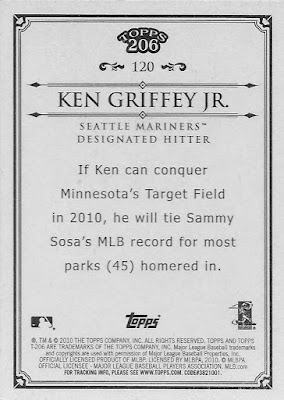 The original T-206 set had the well-known “Piedmont” back, so Topps took some liberty here for the regular base card and saved the branded backs for the mini parallels. Sadly Junior would not homer in Minnesota in 2010, so Sammy’s asterisk-laden record remains *somewhat* untarnished.

It wouldn’t be a Topps set without a whole lot of parallels. Apart from printing plates this is the sole standard-sized base parallel with the vast majority going to the minis (which I think is just fine). The bronze is a little drab (the Chrome Refractor versions in 2010 Topps Chrome are stunners, but there’s no Griffey!), but at 1 per pack these are relatively cheap, so in the binder it sits. 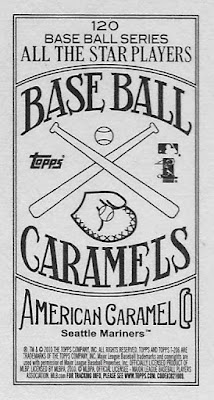 I only have one mini from 206, and I wish it was the Piedmont just for the sake of that Honus I’ll never own. At 1:4 they are similar in scarcity to the 2:5 retail-only Piedmont backs, so I do plan on tracking one of those down someday.

Fun Fact: there is currently one on eBay for $.99 with a shipping cost of $6.00. I would buy this were it not for a sneaking certainty that it would arrive in a simple PWE and the seller would pocket the balance of the shipping cost. I am avoiding this auction on pure principle.

Again, I want that little Piedmont card, but the rest can wait.

Okay, this next one is just a big barrel o' fun: 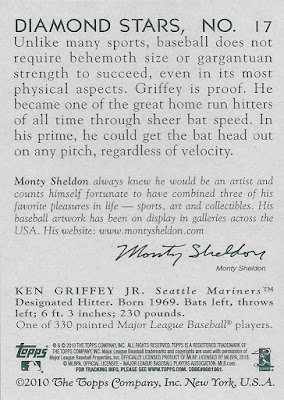 Chicle is a naturally-occurring gum derived from trees, and it is the stuff that makes chewing gum, well, chewing gum. Most companies use a form of edible (not really, tho) synthetic rubber nowadays, but it all started with tree stuff. Weird, but in a good way, not unlike this set.

2010 Topps National Chicle is actually a pretty cool concept wherein artists got to create card images in numerous styles. In some ways it appears to be a predecessor of Project 2020 and, more recently, Project 70.

The artist for Griffey’s card, Monty Sheldon, chose to focus on Junior’s totally infectious smile for his card, and who can blame him? They also gave Junior card #17 which was his uniform number during his 41-game stint in Chicago. Whether that was by design or a happy accident is anyone’s guess.

Like most vintage-nouveau sets this one featured parallels that were defined by what was on the backs. The only one of those I have is the Bazooka Back, one of the easier gets at 1:8.

There are autographed versions of these cards #/10, but they are signed by the artists who made them, not the player on the card. On top of that there were parallels printed on cowhide - 1/1 gimmicks to be sure, but what a gimmick.

I am a huge fan of the “umbrella” Topps logo, and I even have it on a t-shirt. I’d love to land one of those someday, but the easiest of those is numbered out of only 25. I’ll just have to settle on the Target Throwback parallel from the flagship set which also features that logo.

Despite only having a handful of cards from this set I did learn while taking a closer look at Topps 206 that it was almost certainly a really fun pack rip. If you’re not familiar with the particulars of this one I suggest you jump on COMC and search “2010 Topps National Chicle” and check out all the great colorful chrome parallels, classic rookies cards reimagined with modern players, and one truly lovely relic design. I even sprung for the Gold Chrome Refractor of Lance Berkman while putting this post together. There’s no way it’ll be here before this post goes live, so here’s the COMC image if you’re interested:

How 'bout that throwback uniform? And here’s a few more 2010 NC cards of note:

These are just a few of the cards BBCP names specifically as standouts from the set. The Babe card I already had just for the fact that he’s in a Braves uni and there’s not a lot of those. The others just sounded intriguing. Fun note: I spent more on this small handful of cards than the cost of a pair of 2010 Topps Triple Threads colored base parallels that I don’t have – a rare instance of me being a card collector and not just a Griffey one.

I also want one of these, but I don't have it yet:

I read that this set was not popular with collectors which is probably why it ended up being a one-and-done, but I suspect maybe it was a little ahead of its time. I’m not going to lie and say there aren’t a few cards whereon the art comes across a little sloppy, but the good outweighs the bad here by a lot. This set is the closest baseball cards ever got to a full-on acid trip. Or maybe I just have bad taste. Any other 2010 Topps National Chicle apologists out there? I can’t be the only one… 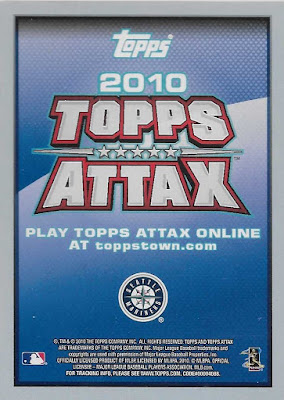 You’ve got to hand it to Topps: they keep on trucking with the strategy game products. There are a bunch of different cards including cards with and without codes, foil variations in silver, gold, and sepia and “Legend” and “Champion” cards akimbo. There’s also a “Battle of the Ages” set apparently, but I don’t follow the strategy card game market very closely so I don’t have much information for you today apart from the fact that this Griffey exists? It is my understanding that the foil cards were only partial parallels, and knowing what I do about Topps in 2010, Junior probably doesn’t have any. Also whatever those numbers on the bottom mean, they’re all too low. There, I said it.

Topps Attax would stick around for another year, that year being 2011, the first in 21 consecutive years in which Topps made no Griffeys of any kind. It even came back for 2020 although I've never seen it mentioned anywhere outside of this very sentence. There are worse tragedies than this being the last Griffey Attax card.

So, that’s it. Every 2010 Topps set is officially in the books as of this post. How are you guys liking the monthly themes? Are they doing it for you, or would you rather I go back to randomposting sets all willy-nilly? And if you’re into the themes, do you have any ideas? Not that I’m running out of cards to write about (Griffey cards are quite prolific, obviously), but I am open to suggestions.