2001 SPx: SPx Gets Their Base Card Groove Back 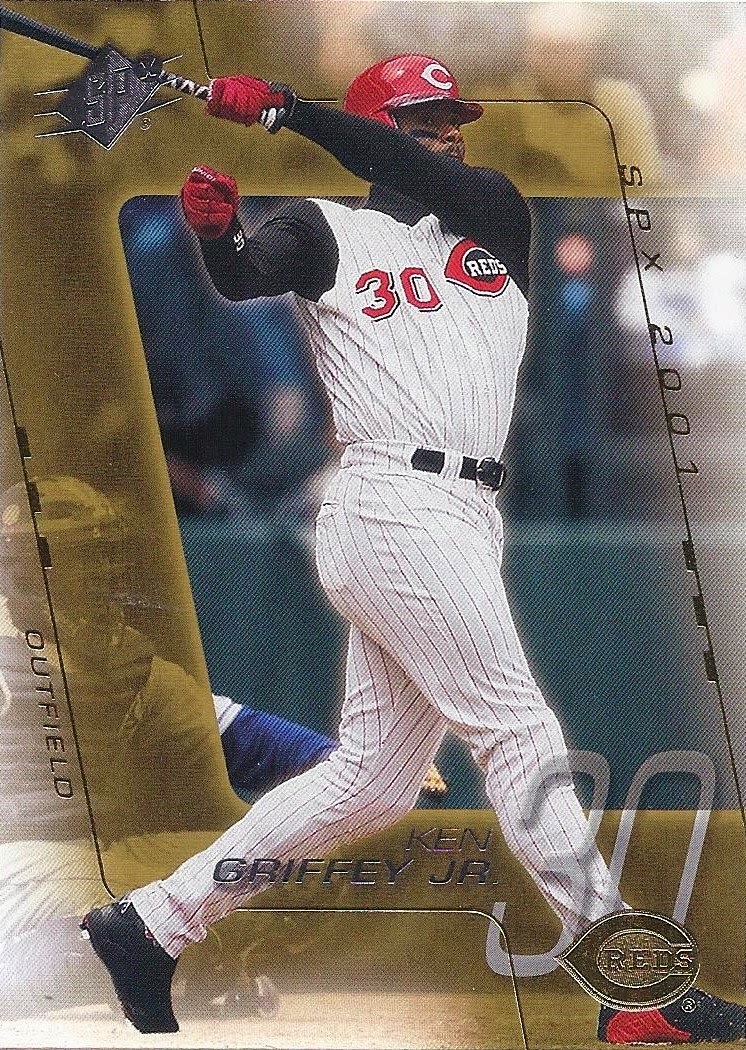 As guilty as this set is of that same lines-for-the-sake-of-lines design that Upper Deck seemed to rely on year after year for everything from base cards to inserts and subsets, 2001 SPx is one of the better-looking base designs of the year. It’s also among my favorite SPx base sets in general, certainly better than the headache-inducing design of the previous year. That being said, the inserts do leave a little to be desired. 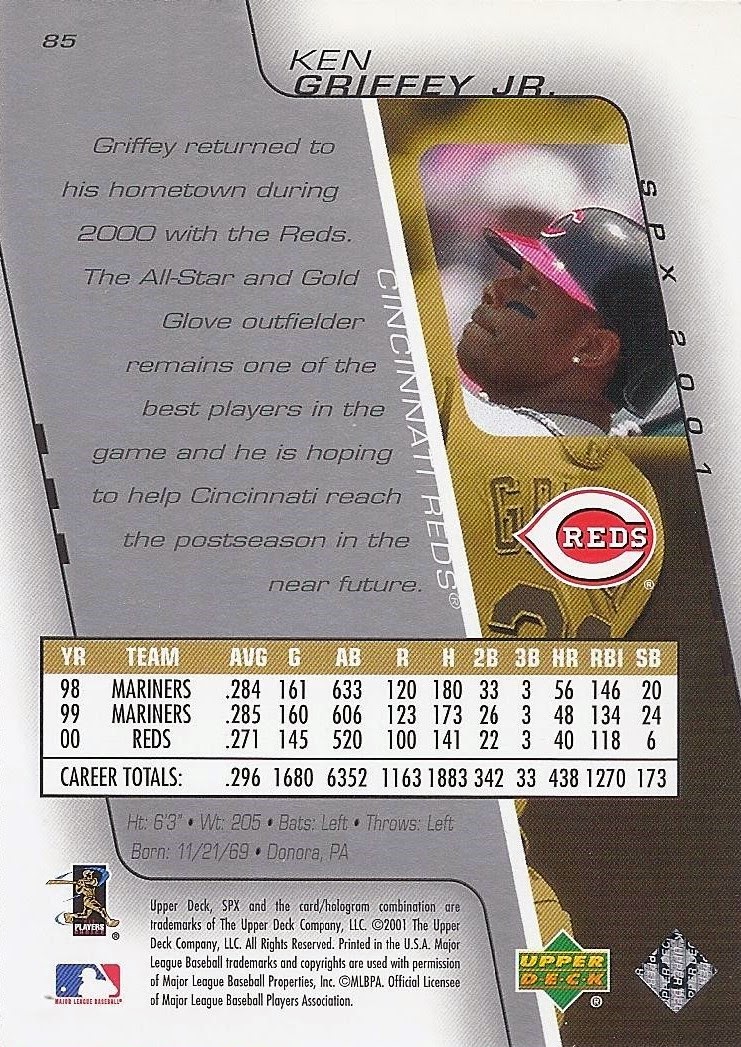 It’s a difficult aesthetic to describe, but it seems to be defined by the use of parallel diagonal lines, lots of foil in both silver and gold, and large frames of sepia shading that bring out the colors in the rest of the card. You can see behind Mr. Junior there that window of stadium backdrop looks especially blue and green. Like salt on watermelon makes it taste sweeter, all that sepia makes this card look much more colorful. The bottom-mounted nameplate with the player’s uniform number and team logo in gold foil are also thoughtfully placed. While it could be considered a bit busy, somebody really designed the hell out of this thing.

I can’t say the same for the back, though. The big, square stat box is an inorganic eyesore against the diagonal lines of the rest of the card, but this is a minor issue compared with that text. As you can see it’s comprised of two sentences:

Sentence 1: “Griffey returned to his hometown during 2000 with the Reds.”

Oof – what a clunker. We get a “during 2000” which is the long, terrible way of saying “in 2000.”  Then there’s the big, honking dangling modifier “with the Reds” just hanging off the end like a limp salami.  Am I being too picky?  No way.  We’re talking Griffey cards here, people.

Sentence 2: “The All-Star and Gold Glove outfielder remains one of the best players in the game and he is hoping to help Cincinnati reach the postseason sometime in the near future.”

First of all, this could have been written by anybody who was simply aware of Griffey’s trade to Cincy. Way to flex your industry insider muscle there, guys. Moreover, the wording here is passive and callow.

Interior: Upper Deck offices. Upper Deck’s Card Blurb Editor-in-Chief removes a cigar from his mouth and tucks his thumbs under his suspenders. “Alright boys, we need to write the blurb for the back of the SPx Griffey base card. Who’s got something fresh and bold? Let’s think outside the box here, people!”

Fresh-faced “writer”: “Well, I would assume he hopes to help the Reds reach the postseason.”

“In the near future?”

Weak words like “hopes to help,” “sometime,” and “near future” should never be used for the hero on the front of this card. Junior deserves something active and sure. “Griffey intends to lead the Reds to a World Series Win, like, tomorrow. Then, two more.” Bam. There’s your freakin’ card blurb.

Oh, and I’m no Hemingway, but I know to separate independent clauses joined by a coordinating conjunction with a comma. Amateurs.

Apart from all this, I really dig the look of this card.  The sample looks great, too: 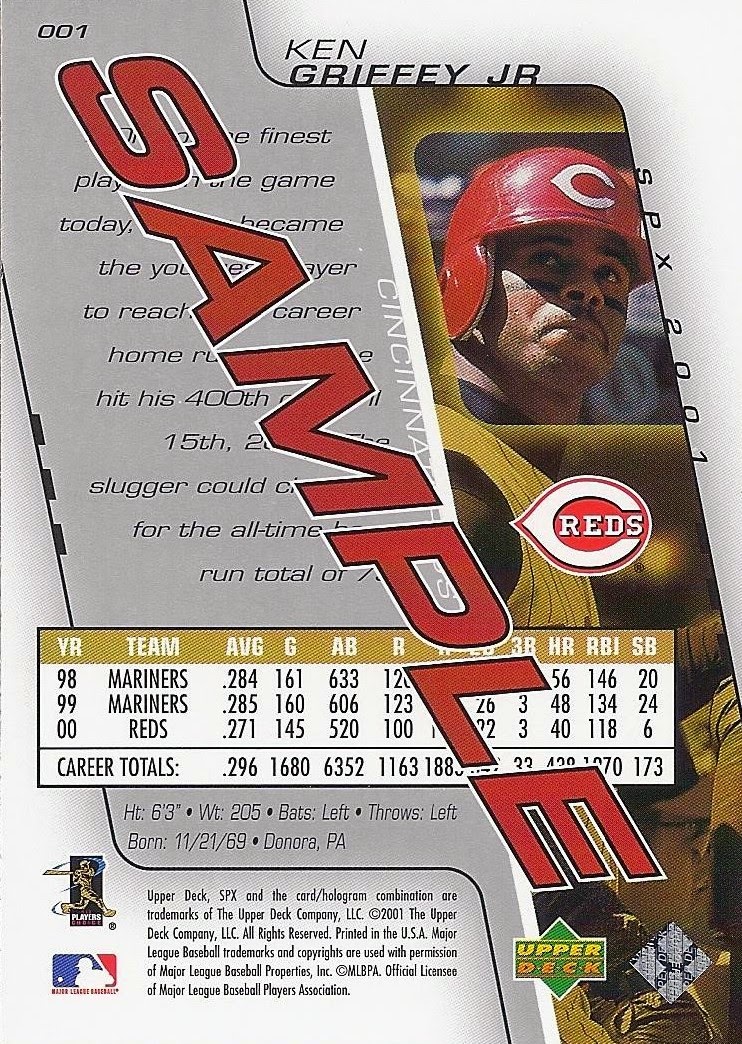 Despite the blurb being covered by the big "SAMPLE," you can still tell it was better than the one that made it onto the base card.  Sigh. 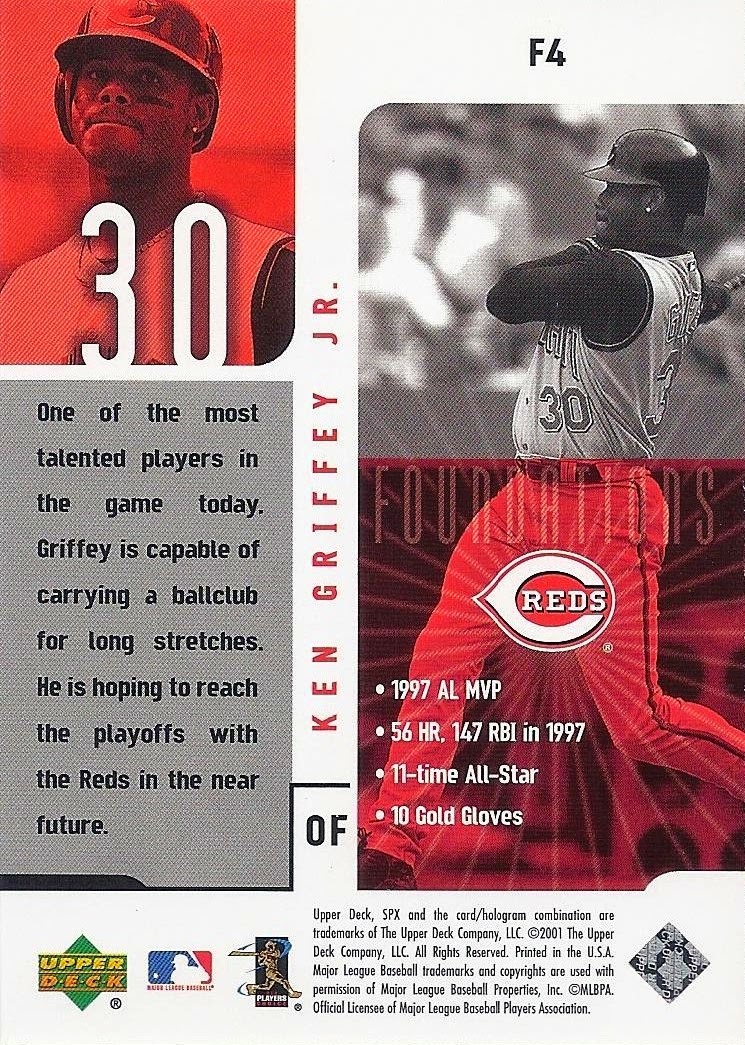 The Foundations insert kind of looks like a subset. The shiny iridescence on the front is nice and the design is okay, but they doubled up the design on the front and back with only superficial differences between them. This is also the only non-relic Griffey in the set with the SPx logo not in the top left corner.

I’ll go ahead and mention now before we go through that again that all the non-relic inserts from 2001 SPx kind of look like subsets. They also all kind of resemble each other, and none of them look as good as the base card. 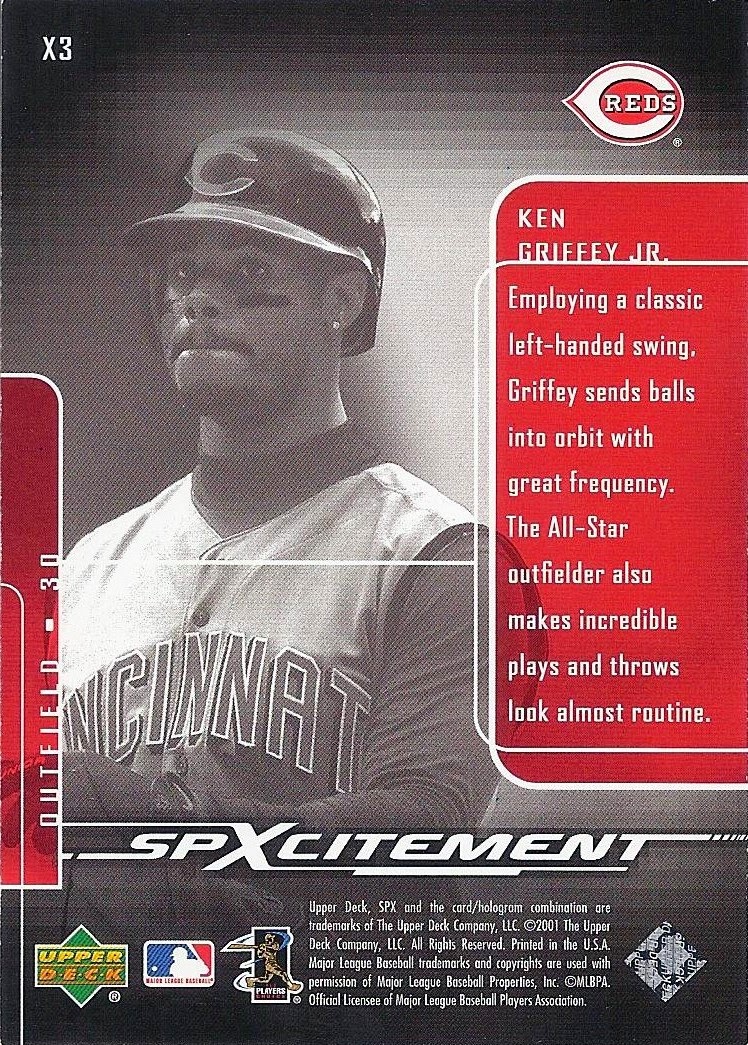 I’ve always liked this name for an insert - it’s clever and written in a cool font. I even like the back design and the blurb. The only critique I have is that the player name is super tiny; but if you don’t know whose card you have here, how on Earth did you end up holding an insert from 2001 SPx? 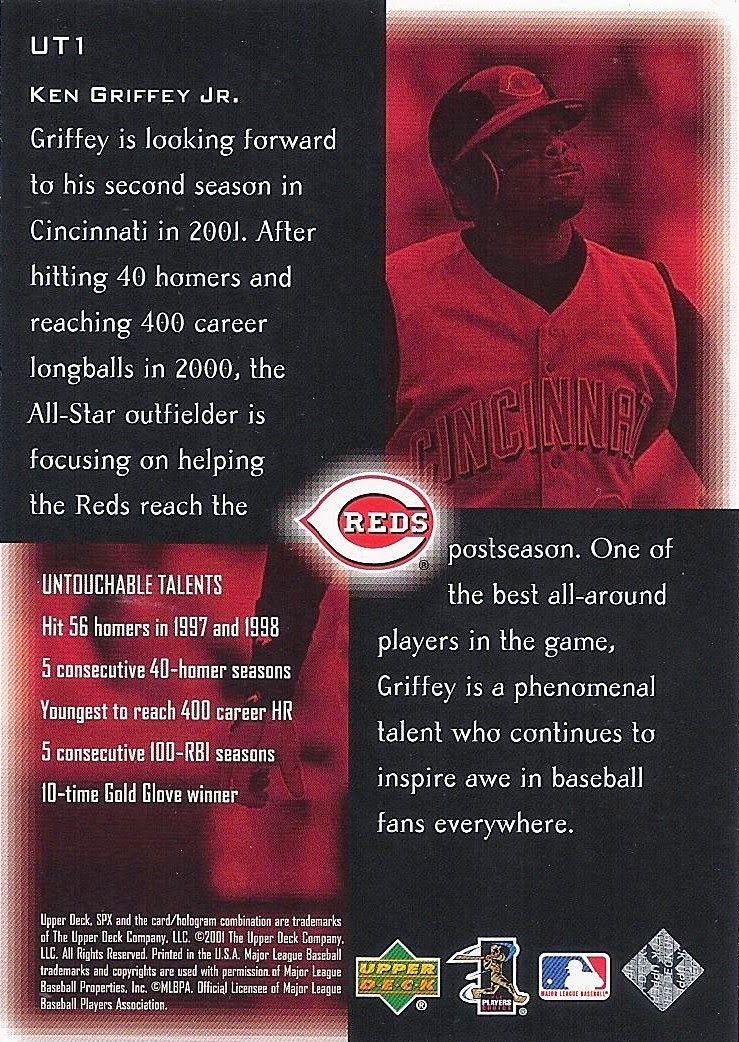 Again, a great font used for the insert and yet another mirroring of the front layout on the back. This blurb makes a hell of a lot more sense, too. It’s like somebody took the blurbs from the other cards, mashed them all together, and properly edited it. The opposing corner squares layout works well with the name of the insert (similar squares don’t actually touch, hence Untouchable, or am I reading too much into that?), but again the player name is super tiny town.

I really want that “Untouchable” font on my computer. It looks like a movie title. 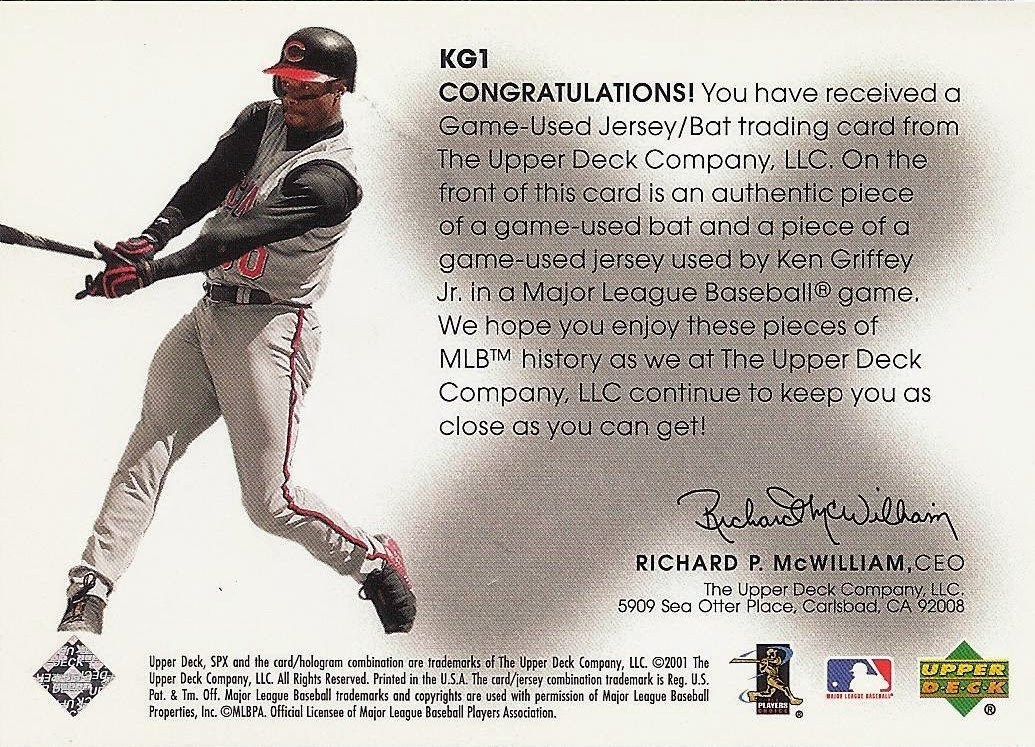 These Winning Materials combo relic cards are very available for being double relics. I have two of them and my Griffey guy still has more to sell me. It’s also the only ’01 SPx Griffey relic on COMC as of this post. Maybe it’s the fact that the relics are so small that they were able to make so many, but it’s everywhere. I’ve seen this card priced at twelve bucks, and I’m like, “Keep dreamin’, compadre.” At least the color of the jersey swatch on nearly all the Griffeys I’ve seen is blue, so it looks like these are Mariners relics on Reds cards. That’s kind of cool.

As you can see, the design is a bit scant with a lot of empty space and the primary focus of the card being the big, red X containing the relics and logos. It’s not a bad-looking card, and I appreciate that there is heavy focus on the relics; but there’s zero difference among all the different relic cards from this brand. They are identical whether it’s a three-player triple relic or one of the sought-after Joe DiMaggio combo relics. All of them look just like this.

There are also no autos to be had. That makes my job of set completion a lot easier, but come on! This is a high-price premium brand. Throw an auto or two in there, guys. Or some patches. Mix it up. Give us a rabbit to chase.

Here are the Griffeys I need from 2001 SPx as of this post:

Maybe I was a little hard on this set, but it's only because I have such high expectations for SPx as a brand. I really do like all the cards covered here.
Posted by The Junior Junkie at 1:00 PM