Let’s continue where we left off from the Part 1. I promise this post ends with a bang.

Here is where I put all the Griffeys from the box, even those previously eliminated, in order by year and brand. Yes, all 2,777 of them – it took two weeknights. Some may call this step unnecessary, and I kind of agree. I mean, I could just sell them off the way they are, right? But it’s just so much fun playing with all these Griffey cards. It’s also the most Griffeys I’ve ever had at one time. I want to enjoy it.

There are four effects of this step that I use to justify doing it at all. First, I care. Had I received this box in the order it’s going to be in when I ship it out to the next guy, I would not have had to spend so much time manicuring and sorting. It’s not that I didn’t enjoy it, but that 12 hours I spent Sunday probably would have been closer to 8. I want the next guy to receive this be box and be like, “Damn, homie’s got his Griffeys togetha, playa. I bet his collection be off da chiz-ain.” And he would be right.

Second, there are a few cards from that Desired Duplicates list that I know I saw in the initial elimination. This step will help me find them and add them to the keepers. It'll hurt the results numerically, but I’ll never have such unrestricted access to this number of Griffeys again. I must take advantage.

Third, I plan on merging all these Griffeys with my own overflow Griffeys to make one massive Superbox of duplicates, and it’s a lot easier to merge stacks that are in mutual order. This is strictly for my own enjoyment, and it should be quite a sight to behold when it’s done.

Finally, I’m eventually going to have to list this thing on eBay, and that means pictures. I want the box to be as orderly and, therefore, photogenic as possible.

Oh, and I should also add that while stacking like cards together I was able to spot two entirely new Griffeys I didn’t spot in the first elimination. Derp!

This is the part where we tally up all the new additions, both unique and duplicate. I’ll go ahead and tell you that from a sorting standpoint the results are not good compared with other sorts comprised of single-card COMC, eBay, and card show purchases. Keep in mind that the benefit here will outweigh the new higher duplicate ratio (which is going to be short-lived, anyway, come the Purge).

Yikes. If this were any other kind of sort, I’d call it an epic failure. It’s really not, though, because now we have a higher caliber of duplicate. Keep in mind also that this is an accounting of just those cards that will remain in my collection. In the following step, all hell is going to break loose.

Here is where we merge all the remaining Griffeys from the Adelanto Lot in with the Griffeys from my own overflow box. This step will be fun and easy thanks to Step 6. It will also make one hell of a photograph. Wanna see?

My God….it’s full of stars (One star: Ken Griffey, Jr. See what I did there?). This picture encapsulates why I don’t want to sell any Griffeys and why I must sell them both at once.

This is my entire Griffey collection in one picture. I must admit that I had no idea it would be this big until I started setting everything up. The craziest part is that there’s no way I could possibly show all of it. There are no jerseys, shirts, hats, or posters in this shot; and yet I have lots of all those things.

Also, you may already know that the heart of this collection is in those nine 4” binders on the shelves back there. From here they just look like binders, but that’s over 3,000 unique cards right there. Everything else is just for show. Still, looks pretty rad, amiright?

As you read this, the Griffey count stands at 10,856 total, 3,442 unique, and a 3.154 dup ratio after the merge. How about that? We know that only 400 Griffeys from the lot are going to stay in the collection, but even with everything merged the dup ratio doesn’t skyrocket as much as I thought it might.

Some of these steps took hours of tedious manual labor to complete, but none of them were as difficult as this next one.

And here we are.

This step involves no sorting, no eliminating, no stacking and restacking or putting anything in order whatsoever. This is strictly a decision point.

All those Griffeys sure look nice together, and having 10,856 Griffeys is kind of an awesome feat of epic nerdiness. Then again I have to store the damn things. Plus it would cost me hundreds of dollars (that I would otherwise make from selling them as a lot) to keep them. That’s a big opportunity cost.

So, what kind of collection do I want this to be? 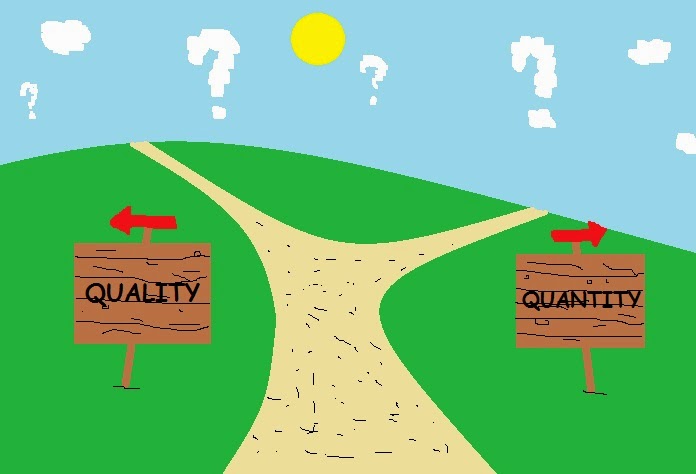 Now for some gratuitous close-ups of the Griffey collection: 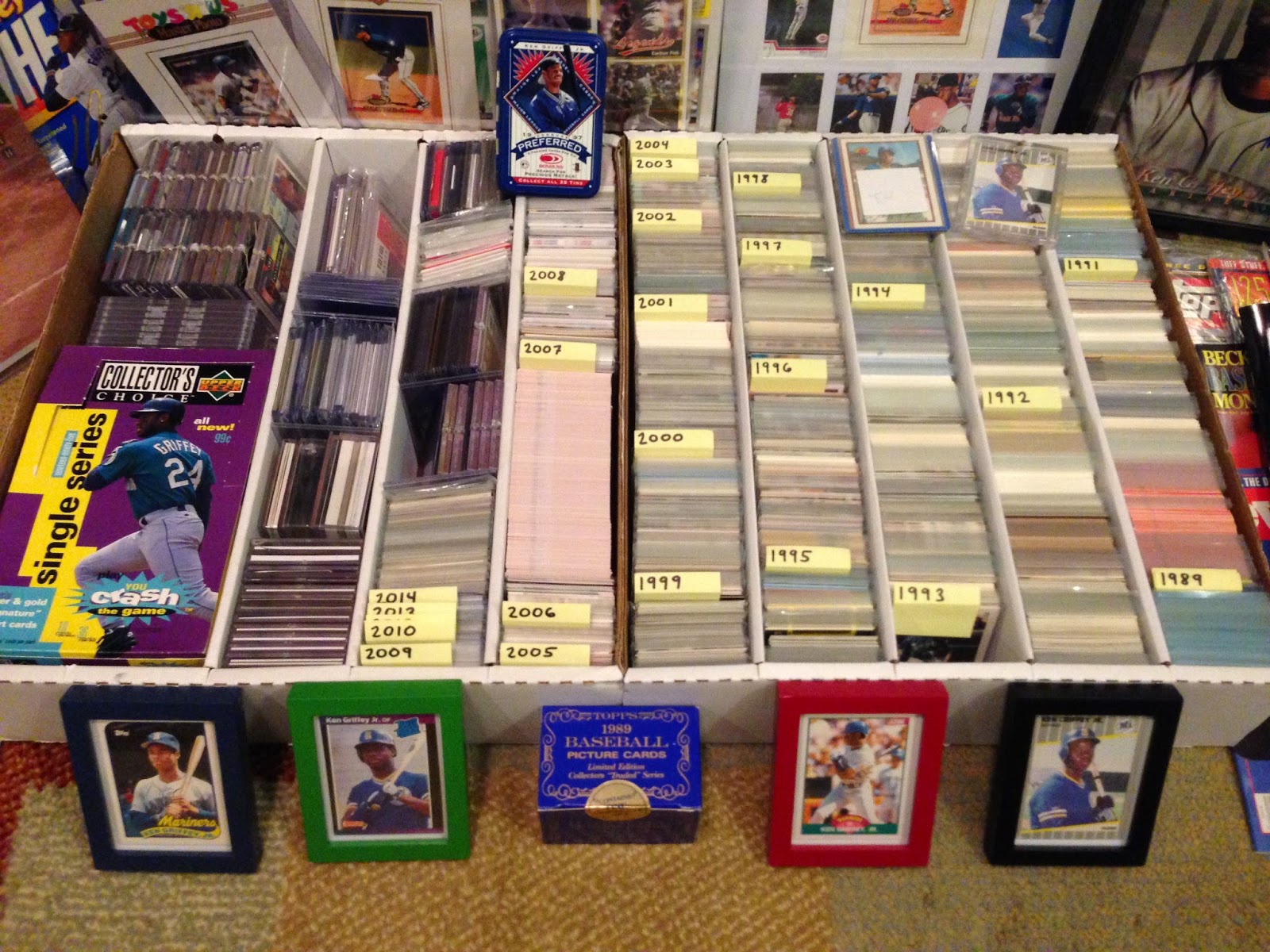 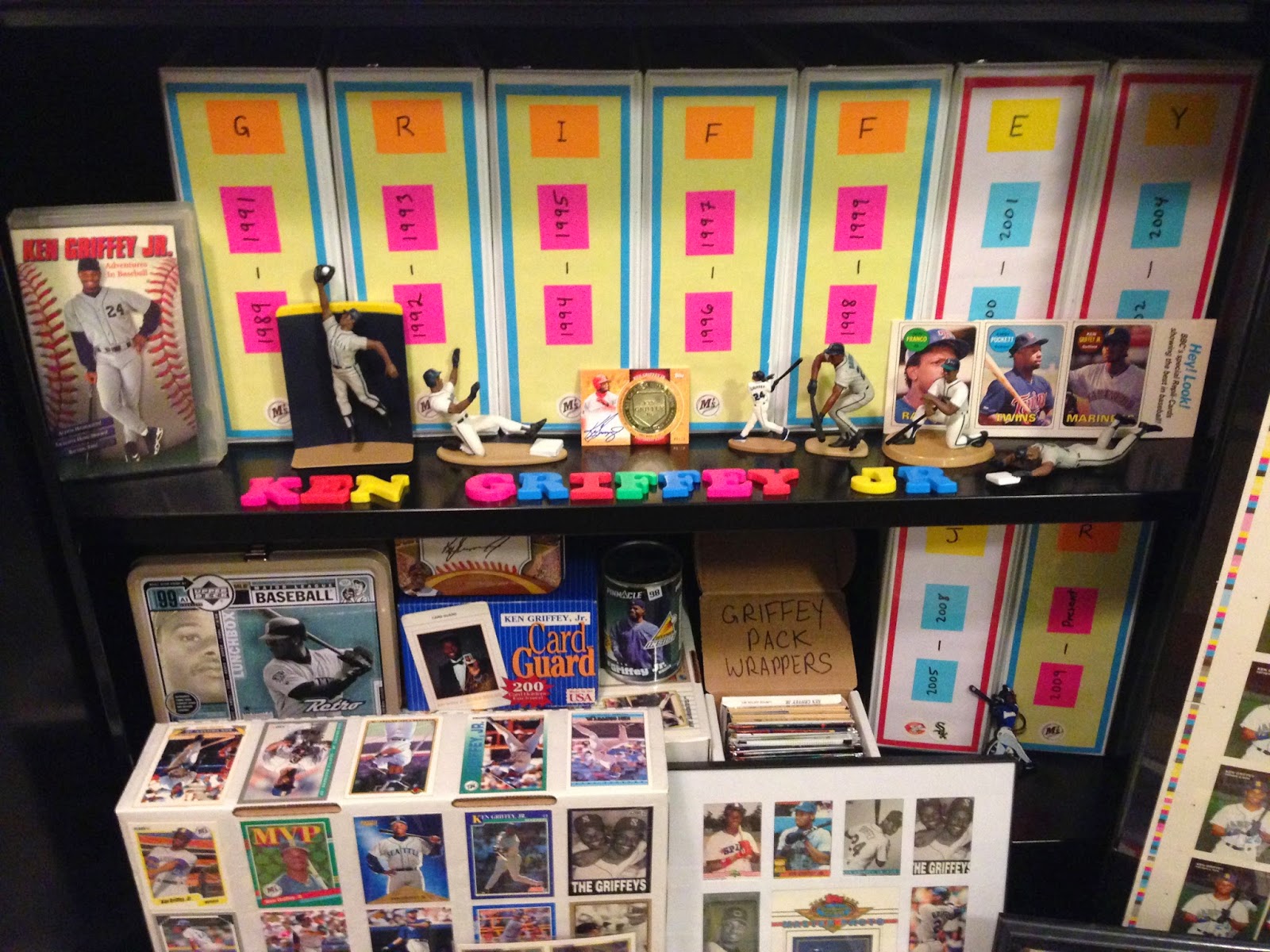 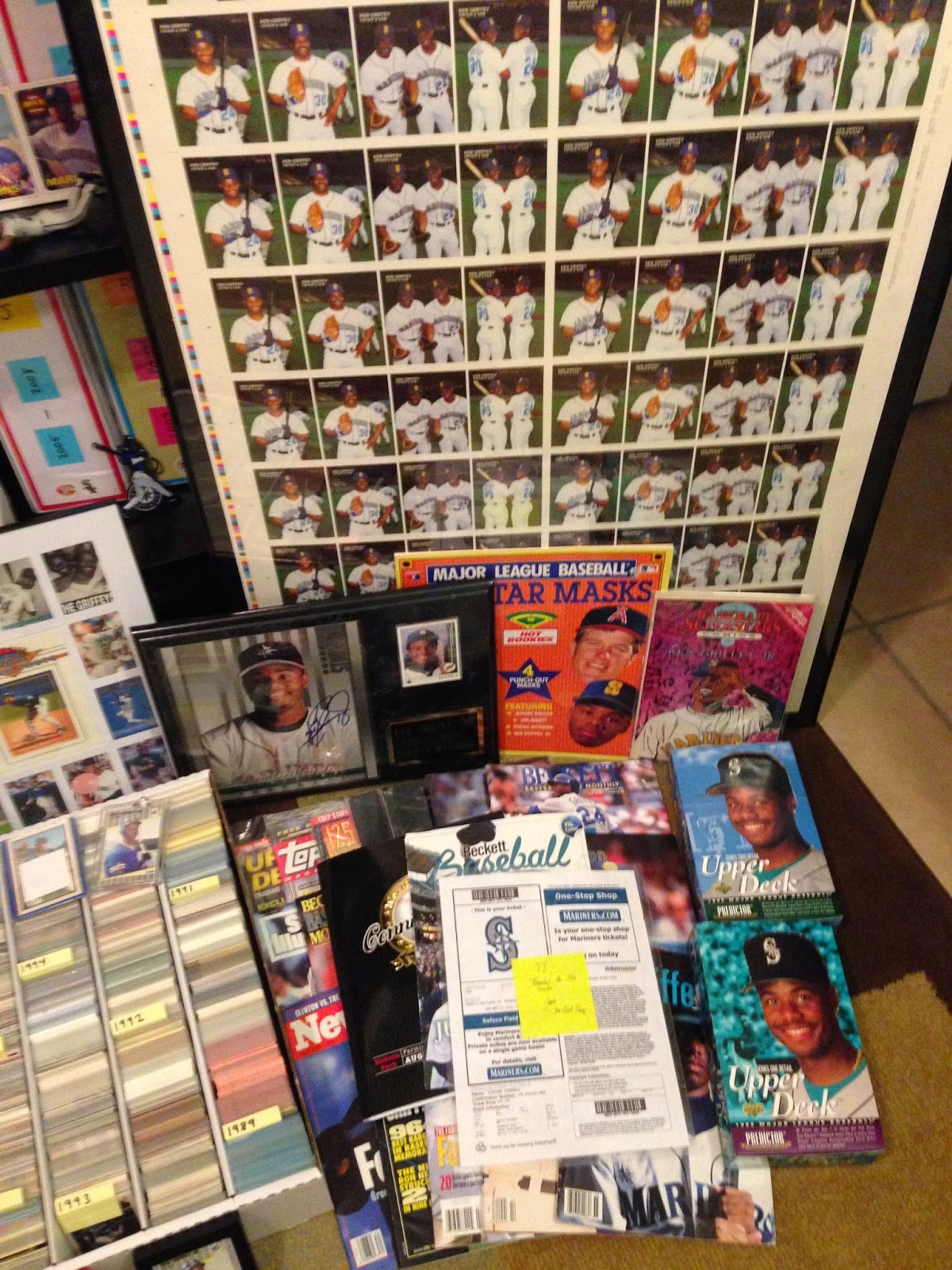 Posted by The Junior Junkie at 1:03 AM