O-Pee-Chee is a candy and gum company that started making collector cards back in the 1930’s then baseball cards in 1965 through a deal with Topps. At first their cards were indistinguishable from the Topps versions in every way apart from one small aspect: “Printed in USA” was replaced by “Printed in Canada” on the back next to T.C.G. That’s it. Everything else was identical.

This changed over time; and while the cards remained more or less the same, logos were added as well as a little French in lieu of English for the Quebecois. Tres exotique, non? This made for more cards to chase which was a big deal in a time when there was only Topps and maybe a few branded oddballs. Even when Donruss and Fleer came along in 1981, there was still very little for card-crazy completionists to go after. O-Pee-Chee provided collectors with a whole base set of new trophies. Sadly, as with numerous other baseball card brands, it didn’t last.

Some quick trivia before we begin: According to Wikipedia, “O-Pee-Chee” is an aboriginal word meaning “the robin.” It was also the name of the summer cottage of one of the company’s founders. I’ve been wondering what the deal was with that name for 20 years. Boom: knowledge is power.

Here is every Griffey-wielding O-Pee-Chee base card design in order:

As you can see there is no difference here compared with the regular Topps base card. Same bright colors, same wacky Buttafuoco-pants border – it’s identical. The card is printed on lighter card stock the way Traded and Tiffany cards were (but not quite as white), so the back is lighter here than the regular. That makes them easy to spot in a stack.

I’ve already done the Timeline for the Topps designs OPC uses through 1992, so I won’t go into the designs too much until the 1993 set - just the differences.

Again, no difference between O-Pee-Chee and Topps on the front and a lighter brown card stock evident on the back. They even kept the massive but totally sweet 40th Anniversary Topps logo. There are more versions of this ’91 card than any other design on this timeline. Apart from the regular base card, there’s the OPC, Tiffany, Desert Shield, Micro, Cracker Jack, and uncut Cracker Jack versions. I’m probably forgetting some, too.

For the first time since the 80’s we have an honest-to-goodness OPC logo in the place of the Topps logo here. That little detail made these a heck of a lot easier to spot. Apart from that, no differences here. Even the card stock is identical (finally).

I really hope you enjoyed the first half of the timeline, guys. After all, the real gems of OPC in my opinion have always been their slightly funky versions of the same Topps cards we’d seen a million times before but with a wild new name/logo and strange French verbiage. They’re fun, right?

Great. Well, say goodbye to that. Their contract with Topps came to an end and was not renewed for 1993. This means the remaining sets are all original designs, and without the Topps clout behind them they sorta skirt the line between bonafide base card and overproduced oddball.

Here is O-Pee-Chee’s first original flagship design in 28 years. I don’t remember opening packs of this or seeing it around card shops or anything. I only dealt with this set when I started amassing Griffeys. I genuinely thought it was an oddball at first. So many 90’s oddballs have that washed out look you know?

Anyway, the bold team name up top doesn’t really match the understated nameplate. The best part of this design to me is the O-Pee-Chee logo in the little team-colored diamond. Overall, none of the elements here complement each other very well, and they’re all imprisoned together by that oppressive white border. I like weird stuff, guys, but I cannot get behind this one.

The last independently-O-Pee-Chee flagship design, this one is actually not too bad. All the design elements have chemistry here unlike those of the previous year. No more full border, nice use of team-color and superimposition of the photography, and there’s even French on the back and front. It feels like a real set. The modernized logo I could live without, but overall this is not too shabby.

O-Pee-Chee ceased baseball card production after ’94 due to the MLB strike, and after being bounced around between card and candy companies for a while, the brand finally ended up belonging to Upper Deck. During this baseball card blackout of theirs they were prolific in the Hockey card market (which they still are) under their new owners. Only one more O-Pee-Chee baseball base set would be produced...15 years later:

This is Upper Deck’s version of the classic brand, and as a whole the set is pretty solid. Upper Deck missed a fun opportunity to sneak a little French on the card back as a gesture to OPC's history, but this is probably for the best as I doubt many people would have gotten the joke. The photography is really good and the cards are colorful and attractive. They even went with the original logo over the one from ’94. Check out the little baseball position indicator – so throwback.

And that’s pretty much where it ends on the baseball front. The brand poked its head out a few other times with a trio of allegedly-higher-end “Premier” sets and a 1969 reprint insert from 2008 Upper Deck, but apart from those they were barely around at all after ’92. It just kind of went away. I assume somebody in Quebec was pissed.

There are not many mourners for this set save for the few old school guys endeared to the brand by having a few extra cards to chase in the days before inserts and parallels. The independently-O-Pee-Chee designs seem all but forgotten.

The brand remains under the ownership of Upper Deck, meaning our odds of seeing new baseball cards from this set are zilch to nada, for now, anyway. There was never much substance to the cards to begin with, so any rehashing of O-Pee-Chee would be gimmicky and totally unnecessary. I don’t feel like we’re missing much.

Sorry.  Once more, here is every Griffey O-Pee-Chee base card in order: 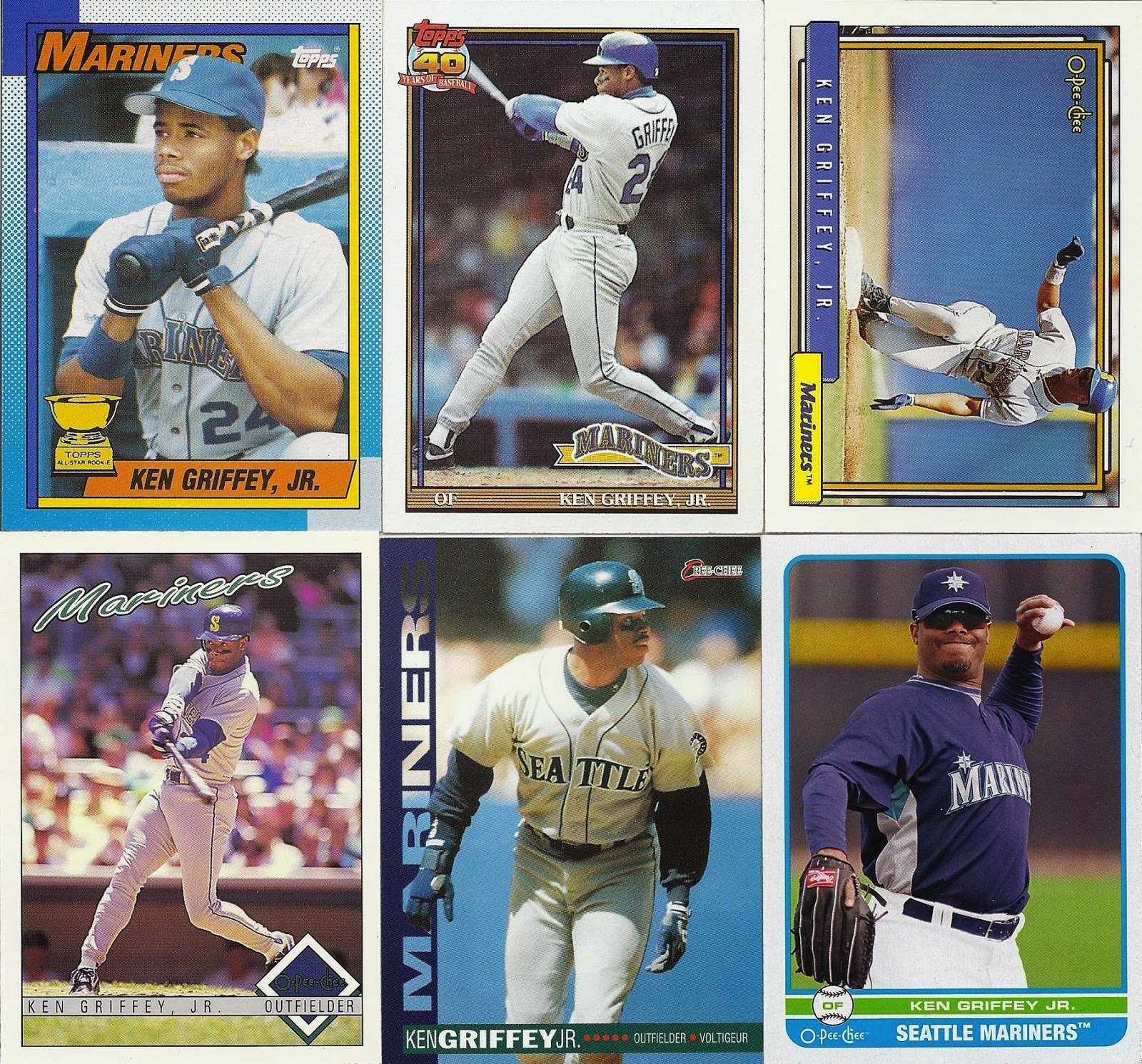