I've been getting a lot of #Supertraders packages over the past few weeks, each loaded with an array of Mariners from every decade. I've been loving all the new Randy Johnsons, Edgars, Tinos, Buhners, Dan Wilsons, A-Rods, etc., but I must admit, that the ones with Griffeys in them get me the most excited. Cue this package from Brian of Highly Subjective and Completely Arbitrary: 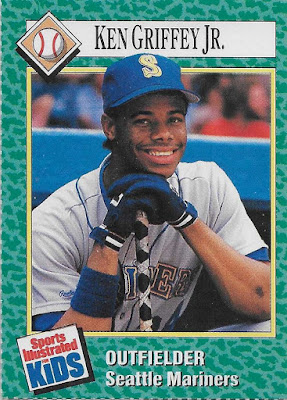 This is not just any Griffey, but one I didn't have. And in above-average condition, no less. Most of these cards were cut/torn out by tiny, awkward child hands, but somehow this one was removed from its page with zero damage and four sharp corners. This kid must have had a touch of the OCD to get it so perfect. Thanks, little guy! 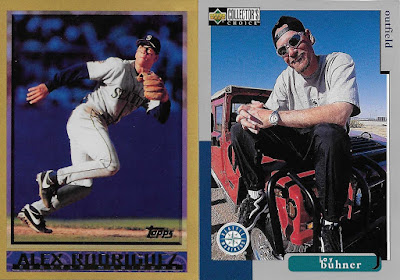 A buddy of mine used to ride around with his girlfriend and spray shaving cream all over any Hummers they happened to come across back when they were still socially acceptable. Looks like Big, Bad Buhner would have gotten the Barbasol treatment. I forgive him, though. That A-Rod is one of those Berger's Best cards from 2016 Topps, an insert I was on the fence about trying to build. I settled on the First Pitch and Perspectives inserts instead, but I still really like the reprints of Berger's Best and end up keeping a lot of them. 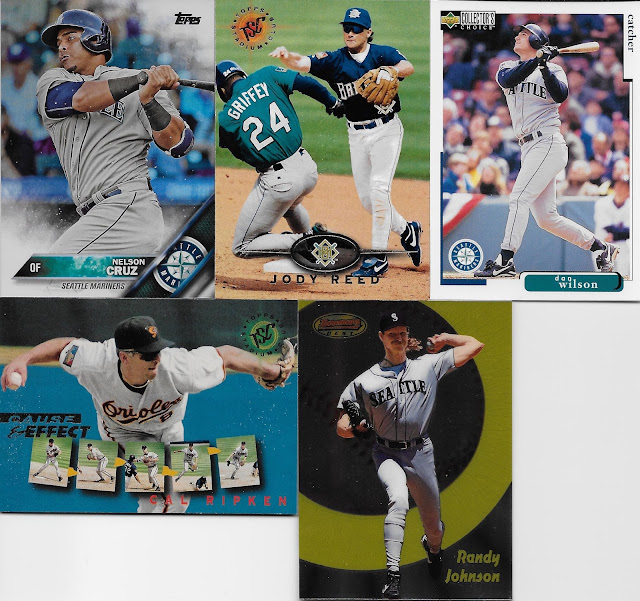 Lots more Griffeys, including a cameo and a sweet Ripken from '95 Stadium Club, one of my favorite iterations of one of the best brands out there. And you can't really tell from the scan, but that Nelly Cruz is one of those foil parallels. They catch a lot of flack, but I like 'em alright. Fingers crossed for pulling the Aaron Nola version someday.

Thank, Brian, for the great cards! I have some lovely Twins coming at you real soon.
Posted by The Junior Junkie at 1:19 PM