The Shape of Things to Come: the Griffeys of 1996 SPx 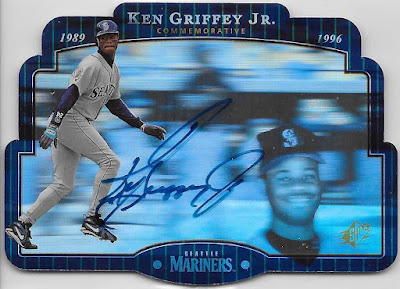 I’m doing this set because I wanted to do an “easy one.” As easy sets go, this one isn’t quite as easy as it used to be, but it’s also not two dozen cards deep which is a step in the direction of easy that I can appreciate.

There was one big marketing gimmick at play here that will always be is the first thing I think about when I think about 1996 SPx (apart from that distinct shape). Do you remember what it was?

That’s right – ONE CARD PER PACK. Uno. Singular. You might expect your average collector might shy away from such a thing as they perhaps wouldn’t get the value they are used to getting out of literally any other pack you could buy, but what happened was the total opposite. I remember them being a big hit, at least with the card kids at my school. Heck, even I bought a few packs. It was overwhelming curiosity that got to me. You can chalk that up to marketing.

So let’s define “simple” here. We have a small, 60-card base set with a single parallel, a 10-card insert with no parallels, and a pair of one-card tribute inserts each with an autographed parallel. That makes a “master set,” that being one of every version of every card available (not counting samples and printing errors), of 134 cards. That’s tiny by any standard, particularly in the mid-90’s (still not the smallest, though - 1997 UD3 clocks in at only 94 total cards, and there may be others I’m not even thinking about). Most sets beat that total many times over with just base cards.

But where this set lacks complexity it more than makes up for that with brutality. The ten-card insert was one per box, and the relatively easy Gold parallel was 1:7, so right off the bat you had to crack 18 boxes just for a shot at the complete parallel and hope to pull the complete insert checklist along the way.

Then there’s the Commemorative inserts with checklists consisting of just a single card each (they are, indeed, two distinct inserts) seeded at 1:75 for the Griffey and 1:95 for the Piazza. It’s likely you would find at least one of each in those 18 boxes.

The 1:2000 autographed versions are another story. You’d need 84 boxes to guarantee a pull. Luckily for our master set builder it would seem that the stated odds are for each card as opposed to one or the other, so those 2000 boxes may actually give you one of each (unless I’m grossly misinterpreting the odds which has happened before).

If you decide to go for the master set here, 24-pack boxes of this stuff go for around $150 (uh, when I wrote this), just shy of double original retail. It’s significantly cheaper to land most of these in the aftermarket. But let’s face it: no one is building the master set. The enduring prizes of 1996 SPx are the Commemorative autos, and the aftermarket for these things is crazy right now.

I really did want this one to be simple.

When I hold this promo in my hand I do two things. First, I run my finger along the rounded corners at the top of the card, and who on Earth wouldn't? Feels good.

The other thing I do is try to imagine who the intended audience of this promo card was, that being someone who had never seen this design before (meaning not someone who’s been familiar with it for 25 years). The purpose of a sample, after all, is to generate excitement. To say “Look at THIS thing, my dude. Pretty effin wild, huh? Yeah, we know. We made it. So how many cases can we put you down for?” I assume never was a sample more effective than here. It was just such a departure from what we’d all come to expect from baseball cards – it really must have been something to see these for the first time. 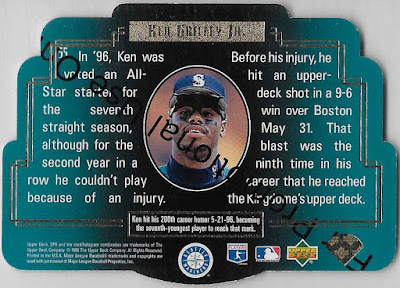 I remember my first pack of 1996 SPx. I was impressed, sure; but also I pulled Paul Wilson, and I wanted my $3.49 back. Take a look at the checklist and find me a player you wanted to pull less than Paul Wilson. There’s maybe one or two. My second pack was Jason Kendall. Seven dollars for Mets and Pirates. Ugh. Nothing against either of these fellows, but mojo this was not.

All the promos are of the gold parallel which we will look at in a moment. There are no silver-foiled base promos to be found. 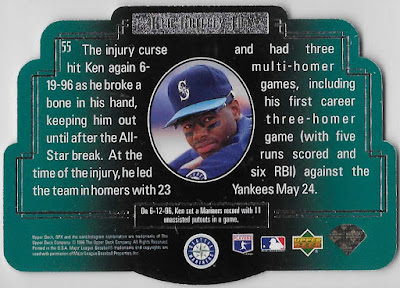 Every card, be it 1:1 or 1:2000, had this exact same die-cutting, probably to prevent pack-searchers. Also all of them had silver metallic foil accents on the back, team-colored holofoil borders on the front, and all the hologram you can handle. That’s that 1-card-per-pack “insert quality” shining through. The 1:7 golds are different only in foil color. In addition to the metallic foil on the back being gold where the base cards are silver, these also have gold hologram logos and nameplates on the front. Apparently some of the regular base cards made it out with gold foil accents due to a printing error, but I’ve never seen one and wouldn't pay too much of a premium for one if I did. Sometimes unintentional variations in the printing are just that. If you have one, though, send me a scan for the blog. 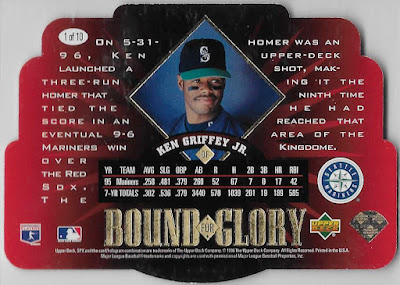 I’m going to tell you a boring story about how I got this card (feel free to skip this part if you’re only in this for the card stuff). My sister’s friends Natalie and Robin needed help moving (that’s right, it’s a moving story. Yee-haw), and as I had worked in the warehouse of a furniture store since I was 13 (I think I was 16 by this point) I was pretty handy with a hand truck (I’m still quite proud of my hand truck skills). So I ended up helping with the grunt work as 16-year-old boys are often expected to do.

Sometime afterwards Natalie handed me a small stack of cards in top loaders and told me something along the lines of “Hey, I got you these for helping us move” like it was super not a big deal. To my absolute shock the cards she gave me were three Griffey cards: the base, Bound For Glory insert, and Commemorative card from 1996 SPx.

TO THIS VERY DAY this remains the most stunningly on-the-nose perfect payment for anything I’ve ever done in my life ever. I remember being so surprised not at the fact that she wanted to give me something for helping but at how hard she hit the nail on the head with what she chose to get for me. I mean, I think she was mildly aware I collected cards, specifically Griffey, but also how did she know which ones I would want or even where to buy them? These weren’t packs: it was MOST of the complete run of ’96 SPx Griffeys ALREADY IN TOP LOADERS. I assume that being the awkward teen I was that I probably couldn’t even properly express my gratitude at the time. I probably said something like “durrr these are cool thanks dude.”

Now that I think about it I have to wonder if Natalie was a card collector and we just never had a real conversation about it because who else but a card collector could know what an incredible gift this was for a 16 year old boy who would grow up to spend ten years of his life writing a Griffey card blog? Would it be weird if I called her and said, “Hey, Natalie, it’s T.J. Yeah, haven’t seen you in a couple decades, but remember when you gave me those baseball cards 25 years ago for helping you move? I just wanted to say thank you again because that was incredibly thoughtful. Like, impossibly thoughtful. Like, suspiciously thoughtful. C-can you see inside my head?” Yeah, everybody wants a call like that out of the blue.

So, Natalie, if you are reading this, you let me know if you ever need help moving again. For real. I am there. Also here’s the address of the nearest card shop. Tell him The Junior Junkie sent you. He knows what I like. 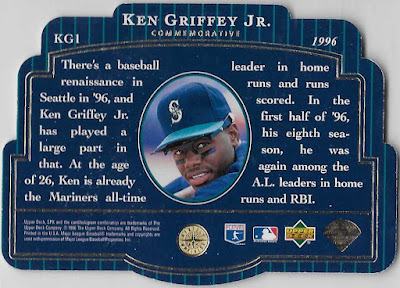 No one can tell me Upper Deck doesn't know how to put together a freakin' baseball card. This is some cardboard engineer's opus, and I want to shake his hand. They are available on COMC for two bucks a pop. TWO. Part of me wants to go there and buy every single one just to teach the universe a lesson.

Junior’s Commemorative cards were seeded at 1:75 or just shy of one in three boxes. Piazza’s card was 1:95 or about 1:4 boxes. I don’t know exactly why the Piazza is scarcer, but it’s not that big a difference.

The card itself is absolutely the best design of all 134 distinct 1996 SPx cards. That blue border with the pinstripes and the classy font are just beautiful. Piazza’s card is…well, it’s not as good. Obviously.

The fact that this insert is 1:2000 and that there is only one card in the insert (again, the Piazza auto is listed with its own separate and distinct insertion ratio) effectively makes it a 1:2000 card. This is different from other autographed inserts with astronomical odds such as, say, the 1997 UD3 auto which is a 4-card set seeded at 1:1500 which was for a general insert pull and not a specific player. 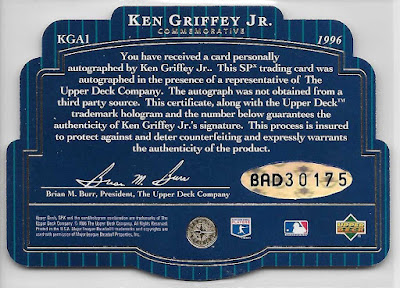 The sticker doesn’t mean anything. Why did they even bother? Was it just to say I'm BAD? 'Cuz I already know that.

Hologram surfaces are not often kind to ink. The 1997 SPx Bound for Glory auto, for example, has spots right in the autograph where the ink could find no purchase, and it makes for a sloppy signature if you look hard enough. That was not the case here. Pretty much all of these that I’ve seen look smooth as butter.

I felt like I was overspending when I paid $150 for this one a few years back, but in 2021 (when I wrote this sentence) prices 15-20 times that would not be unreasonable, it seems. Of course I will never sell. I am holding on to this one until I can someday show it to Natalie.

Ready for another story? A kid down the street from me owned this card. Like, back when we were kids and nobody owned anything this cool. He didn’t even pull it – his dad just up and bought it for him. And he was so indifferent about it. I was kind of obsessed with this fact – that this amazing card that I wanted so badly was sitting in the little white house just a few doors down from me, not being appreciated enough. Used to drive me nuts. I guess that’s entitlement for ya.