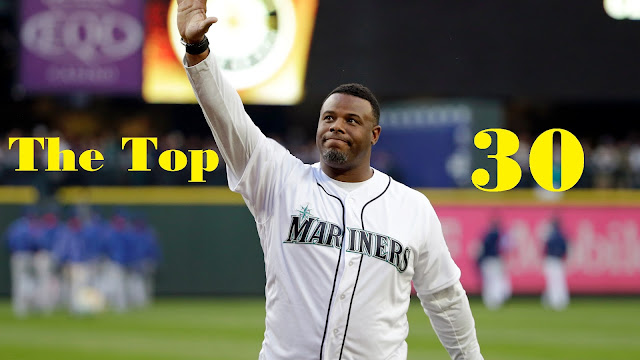 There were years when I added thousands of new Griffeys to the collection. As the years went by, thousands became hundreds. This year I probably added less than 200.

I tend to spend a lot more when I’m actively making posts as I prefer to have the real cards to scan. That used to require I spend a few bucks to land a particularly troublesome insert or parallel every now and then, and "troublesome" used to mean five or ten bucks. Now it means $40-$100. Hence, fewer grey whale Griffey gets in general.

My collecting strategy nowadays can be summed up in one word: opportunism. There is still the occasional card I feel like I can’t live without, and I still overpay here and there to get it; but for the most part I wait out the deals and scoop them up as they come. There’s not a whole lot left on my want list that I’m super passionate about save a small handful I would happily go into a little debt for if the price is right.

One difference this year I knew would start happening eventually: 40% of this year’s Top 30 came out AFTER 2019, a shift towards modern releases that is unparalleled in the annals of this list. One reason for that is the fact that I already have most of the ‘90’s cards I really want, and a much bigger reason is the fact that those ‘90’s cards I do still want are significantly higher now. And let’s not discount the fact that the new releases have also been really cool lately.

Still, I am really proud of the list this year. I tend to forget all the great cards I managed to pick up, so this list is a nice little reminder to myself that when it comes to Griffey-gettin', I still (kinda) got it. 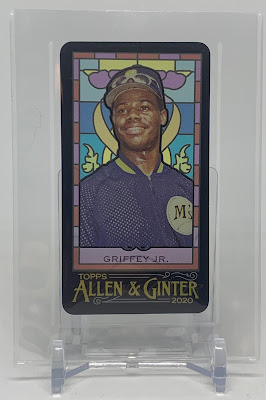 Man, oh, man am I ever glad stained glass is back. There has never been a single one that wasn’t amazing, and Griffeys doubly so. You're bound to spend more on a similarly-numbered sticker auto, but why would anyone do that? 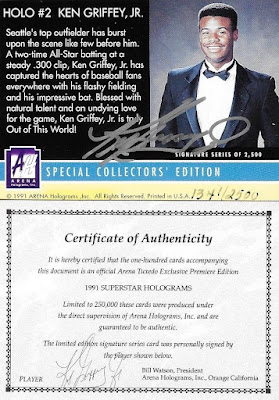 Yeah, buddy! I actually got my hands on a pre-2000 Griffey autograph this year! It’s not a major brand or anything, but it is on the list of officially-released pre-2000 autos (which I seem to remember was at 59 cards last I looked at it). Plus it’s on-card. That’s the case for just about every early auto, but by today’s standards it’s a huge selling point. 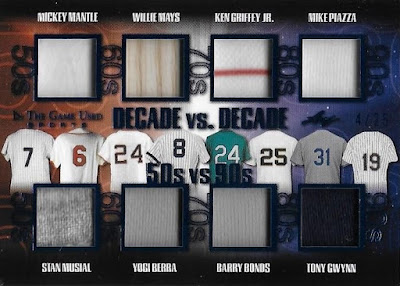 Bonds is on it, so that’s a bummer, but it’s the ONLY bummer. Everything else is goddamn magical. This is one of those “wow factor” cards with massive cross-generational appeal even to the non-collector. It’s also one of very few cards I bothered to show my Dad when I landed it. 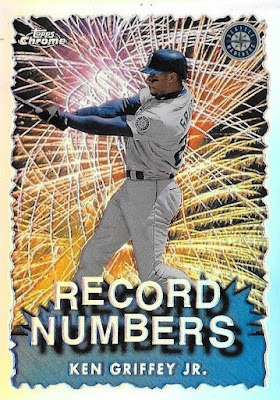 People sure like their refractors. I mean, they always did, but now they’re like $UPER into them. Practically all the Griffey Topps Chrome refractors from the ‘90’s are all well into white whale territory, and a lot of those are just a little bit off-center which is a blessing for guys like me who want to buy them for reasonable sums of money.

Of course not all of those ‘90’s Chrome cards are created equal. This insert looks particularly good with refraction given the fun fireworks background. Personally I think that lends it an extra layer of desirability. There are rarer ‘90’s Topps Chrome refractors, but very few are as attractive as this. Some of the rarest ones are even kinda ugly. 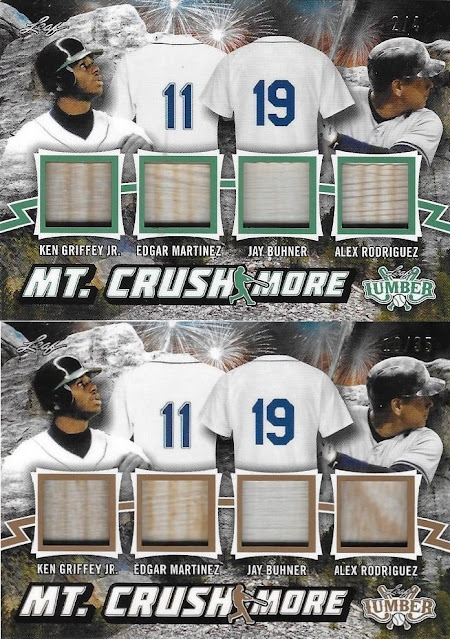 Leaf has been a mainstay in the Top 30 list these last few years, even landing the top spot in 2019; so it should be no surprise once again to see so many here. I’m a Leaf apologist, and I knew the moment I saw this card online that a) it would be mine and b) it wouldn’t cost TOO much because it’s Leaf. I actually ended up with five or six different cards from this set because it’s a cool idea with a great design. 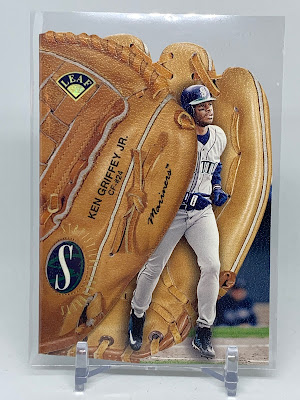 Yet another Leaf. There’s only a handful of ‘90’s inserts on this year’s list (which is normally filled with them) as that seems to be where the demand has been going – and rightfully so. Gone are the days of landing dozens of new-to-me ‘90’s inserts, particularly those with 1:hundreds insertion ratios. This particular card was the last of the iconic Statistical Standouts inserts I needed. Is it finally time to start those Insert Design Timelines I've been talking about for years? 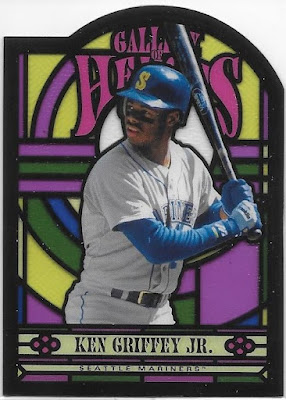 Man, oh, man, am I ever happy to have a new Gallery of Heroes Griffey in 2021. This set dropped on December 20th, so it’s as new as Griffeys get. Now that I think about it, this is the most recently-released Griffey ever to make a Top 30 list in any given year. It’s also an absolutely indispensable get of Griffeydom.

There is an unspoken truth among Griffey collectors that there are simply not enough Griffey GOH cards in the world. We got an unbroken run from 1997-2000 (plus a jumbo of the ’98 card), a glaring Griffey omission from the 2013 Archives GOH throwback insert, and at long last this beauty. Not trying to discount the new guy, of course. This design has it all – texturing, bright colors, die-cutting. It fits right in to the GOH design timeline and, in its own way, even stands out as the return to form it is. Just a well-executed insert from every angle. Nice work and everything, Topps, but the fact remains, the world needs more of them.

Please allow me to reiterate that the awesomeness of stained glass Griffeys cannot be overstated. They are, quite possibly, the greatest thing ever to happen in all of human history – better than a child’s laughter, better than the indomitable human spirit, better than late-90’s Yasmine Bleeth – and Gallery of Heroes is the standard-setter. Sure, stained glass Griffey cards started their comeback in mini form in recent Ginter sets, but it’ll always be a Gallery insert to me. That said, how it didn’t make an appearance in 2020 Topps Gallery is beyond me.

I am calling for drastic measures. The time has come for a new brand: “2022 Topps Ken Griffey, Jr. Gallery of Heroes” – nothing but Griffey GOH cards. It doesn’t have to be crazy – maybe a 100-card base set, all stained glass, of course, using throwback designs and also-ran concepts from previous years, complete with colored parallels, refractors, autographs – the works. Serial-number all the base cards to 50 with a limited stated run of, oh, 1200 five-card mini-boxes? That should leave room for fun stuff like inserts, printing plates, a handful of real glass 1-of-1’s. Stuff like that. Online-exclusive distribution limited to one per verified Topps account. Everybody gets one. Am I being unreasonable? 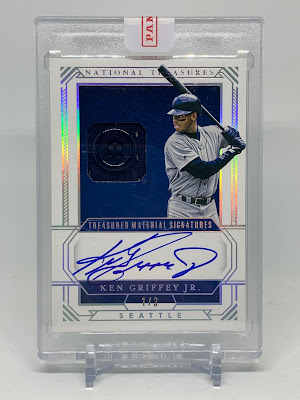 If the button wasn’t on there, this would probably not have cracked the top 3. It WOULD, however, have cracked the top 10 as it is a beautiful card with a simple but elegant design and, above all, an honest-to-goodness on-card signature. Those can be hard to come by even in “high-end” products. 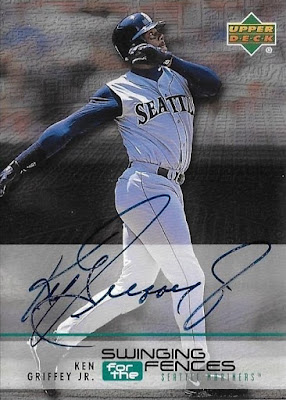 TWO! I got two pre-2000 Griffey autographs this year! I assumed my days of landing a couple of these a year were over given the current market. It seems they’re all $800 and up nowadays, but this one was actually pretty reasonable. I figured I better grab it while I had the chance (something I didn’t do with NUMEROUS other pre-2000 autos and now I’m kicking myself).

Of course these are not quite as well-known as, say, the 1998 SP Authentic Chirography or the 1997 Upper Deck UD3 Superb Signatures. But I have both of those other cards, and I can tell you that this one cost me almost $100 more than those other two put together.

Okay, #1 time. You've seen this one before, but it's got a brand new look. 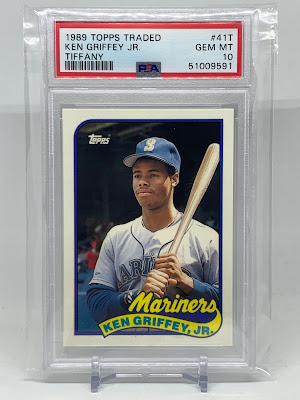 Okay, so first and foremost I already had this card which gives it the dubious honor of being the first card to make the Top Ten twice. I got it way back in 2014 when I ranked it at #4 on the Top 30 list. This year as anyone else who submitted cards to PSA knows, it was a whole thing. They held my cards for 10 months, and when this particular one came up a 10 grade PSA charged me an extra $200 to get it back (what is that about, anyway?).

BUT, an acquisition is an acquisition, and this one happened in 2021. The card alone is great, but the slab is the really important bit here. It’s the part that transforms what was already fantastic and desirable rookie into a true monster of Griffeydom. As of this writing, PSA 10’s of this card have a population of 330 or 16% of the total quantity graded by PSA. Most of these come straight from sealed boxes (mine did), so I imagine the only issue PSA could find with that other 84% is centering or a corner ding here or there. But not on mine, baby!

This card "gemming" as they put it was all kind of funny to me, primarily because it cost me $100 for the complete set just a few years ago. That and when I first pulled it I thought it was a hair off-center. Apparently I don’t know a thing about grading because PSA thinks this thing is just right.

When I got my grading report I started pulling sold listings on all the 10's as prices on those tend to be wack-a-doodle. At the time this one was selling consistently over 4k, immediately putting it way up on the list of my most valuable Griffeys. I haven't checked it since, and I'll continue to not do so because I don't want to be tempted to sell. Then again, four G's is a lot of Funyuns.

Of course this card had stirred something in me, and now I want ALL the Griffey rookies in gem grades. There was a time when I would have written "Maybe next year" in this spot, but NO. No, not next year or even the one after that. Not unless I slip and fall in a Wal-Mart or something. Times are tough.

Welp, that's the list. Believe it or not I actually have five new blog posts ready to go up, and I've even started putting together a sixth. I think making this list every year is one of the few things keeping in the card-blogging game - I tend to enjoy a period of proclivity toward the blog around this time each year, and I believe you are reading the reason.

Then again, wrangling a baby on the cusp of toddlerdom is a full-time job, so no promises on when those'll be up. That is unless a horrible new Covid variant sends me home for another three months. What are we up to now? Pi? Rho? I am out of the loop. Whatever it is, if that happens I promise to go back to my once-a-week post grind.

Thanks for reading, and stay safe, y'all.