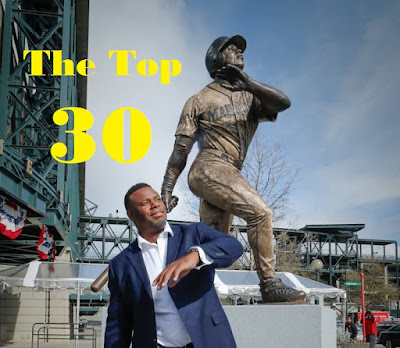 Well, cards are officially back. Prices are right back to where they were before the “crash” and often much higher, there are new collectors everywhere as well as old collectors made new again, and there's money – so much money – coming into the market as a whole. It’s weird how niche this all used to feel.

I am hoping that as the card companies try to keep up with demand they don’t usher in a new era of overproduction. It’s clear from all the new releases popping up what seems like every week that Topps is cashing in on their exclusivity license while they still have it. And yesterday it was announced that the soon-to-be-exclusive MLB and Player's Union license holder Fanatics acquired Topps for like eleventy billion dollerzz or whatever; so relax, fellow enthusiasts - Topps Bunt may just stick around.

With all that’s going on I’m still trying to stay excited about the future of cardboard, but there are times when I feel a bit overwhelmed. The last time I felt that way was back in 1998 when I stopped collecting cards altogether. I guess I’m more excited than bothered to see so many new Griffeys. It seems the card companies have gotten wise to who is buying up all their product - or at least that segment of the market that isn’t flipping blasters – so they’ll keep giving us new cards of our retired childhood favorites to chase. There’s just SO MANY. That said, there are not nearly enough new Bryan Clutterbuck cards. What up with that? 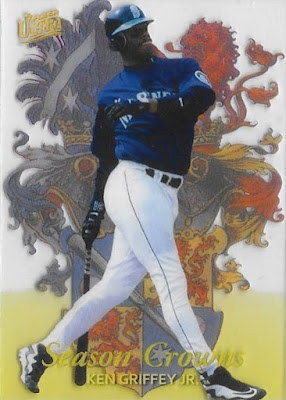 Ultra was one of the few brands you could find retail card boxes of at our local pharmacy in the mid-90’s, so I opened a lot of it. I remember pulling a few of these lovely acetate Season Crowns, including those of Randy Johnson and Edgar Martinez. I knew that with enough patience and allowance money, eventually I would eventually land the Griffey. It was months later that I got ahold of a Beckett and learned that THERE IS NO GRIFFEY. What. One of the coolest insert designs I’d ever seen (up to that point) and there is no Griffey? It really got to me.

Of course that didn’t stop my buddy Chris from setting things right and making from scratch his own custom 1996 Ultra Season Crowns acetate Griffey. The weird thing is I never mentioned the little rectangular hole in my heart that this insert's Griffey-lackin' made so many years ago. He just up and decided to make it happen. It was already in the prototype stage when I learned about it. And is that a focus tongue I see? I’ve always been a huge fan of customs, and this is way up there on my short list of my favorites.  Well done, Chris. 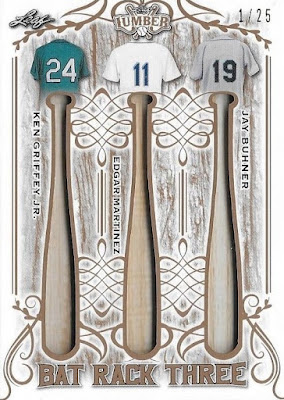 Leaf are the unsung heroes of concept, design, and execution. It seems like every year they are all over this list, and I continue to be surprised at how reasonably priced they can be. Player photos or not, the fact remains that if this was a Topps card, I probably couldn’t afford it. 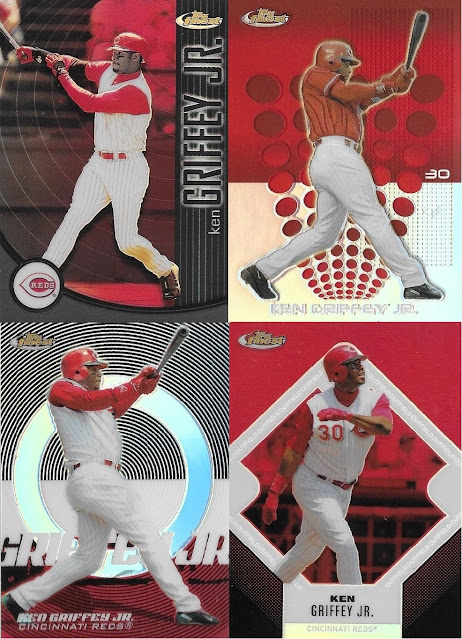 The theme of the 2021 Top 30 list (and the 2020 one while we’re on the subject) may as well have been “cards I should have gotten back when they were cheaper.” Gem grades, what seem like common parallels, and just about every kind of refractor all fall into this category.

One night in mid-2021 as prices continued to rise I sat at my computer and racked my brain, trying to figure out which Griffeys I needed that I should pick up now before they go any higher. I thought, what is everybody chasing right now? Refractors. My mind immediately went to Finest, so I perused the Beast and made a note of every Finest base refractor I didn’t have. I then set about picking them off one-by-one. These four were the last of them I needed.

A big thanks, by the way, to the 1996 Beckett Ken Griffey, Jr. Tribute checklist for forcing me to grab all the early refractors before the great cardboard scramble of 2020. I’m happy to say my Finest base refractor quest is done, albeit for probably a few bucks more than if I had done it back in 2018 like I should have.

I am a Project 70 slut. I was the same with Project 2020, and I will be again for Project Whatever-is-Next-Year. I have no excuse. The cards are insanely cool, and the occasional foil popping up only sweetened the deal (four!). I even shelled out a few extra bucks for a “companion card” featuring the mom-who-got-scared from the Fresh Prince intro showing off a sweet pair of Nike Junior Freshwaters. Not to mention Snoop Dogg and Alex Pardee made the checklist as artists this year. These continue to be loads of fun even for folks who don’t collect cards. 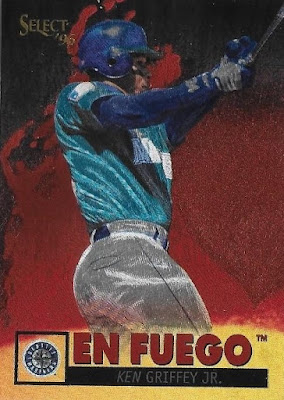 I was never actively chasing this one which is probably why it took me so long to get one. It’s even from my own personal wheelhouse of active collecting (1995-1998). I have no excuse. The En Fuego insert did show up again in the all-chromium 2013 Select reboot, but it never looked quite as good as it did in the original Dufex. 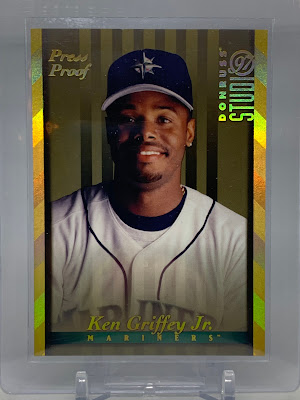 Not to disparage this lovely thing, but there is a simple truth that I’ve said before and that remains true to this day: the silver looks better. Of course there are a whole lot more of the silver than there are of the gold, and this one does look more expensive (it is). 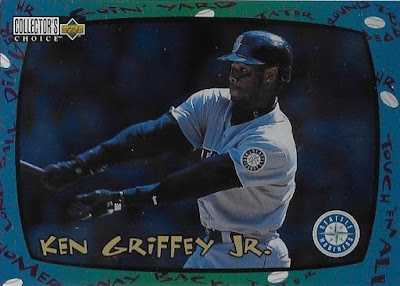 This is the “upgraded” (foilboard) exchange card the winners received. They’re not terribly rare as two out of Junior’s three contest cards this year were winners. The guy even managed to hit three home runs within the span of dates of just one of his contest cards. 1997 was a big year for owners of Griffey You Crash the Game cards. 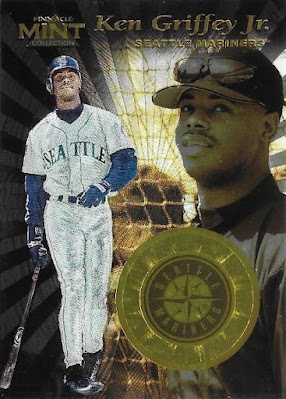 2021 was a massive year for Griffeys made in 1997 which make up nearly a third of the top half of this year’s Top 30 list. I've always been vaguely aware of this particular parallel but never got around to picking one up (I was always more focused on the metal coins). Now that I have one I do wonder what took me so long. It’s a lovely mix of Dufex and foil that few cards can claim. These were seeded at 1:48 or one per three boxes, the same ratio as the 24kt gold-plated coins. 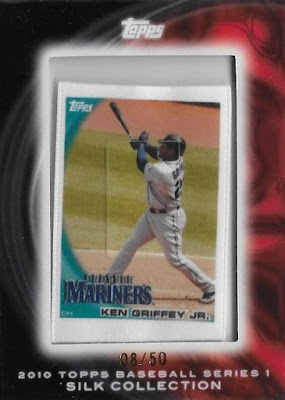 While writing my post about 2010 Topps I became enamored enough with these silk cards to add them to my eBay saved searches. Weeks later one popped up for a not-unreasonable sum. It’s a unique idea, and as it was Junior’s sunset card, every version feels a bit more special. It’s hard to blame Josiah for grabbing almost the entire canonical run (and then some). 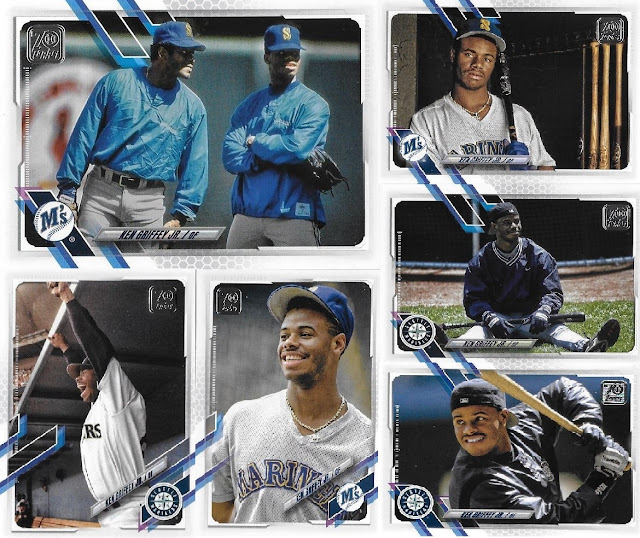 In terms of dollars spent this was the most expensive spot on the list this year. By a lot. A whole lot. Topps - guys, gals, folks, seriously - please stop putting such great photos on your SP’s so I don’t feel quite as compelled to overpay for them.

Okay, ten spots to go. Thanks for reading.

Posted by The Junior Junkie at 7:48 PM