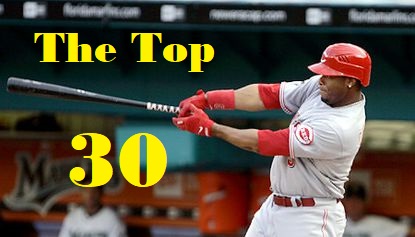 As my eldest son grows up, so do his hobbies; and we’ve reached a point when some of them are actually pretty appealing to me. For example, one day he came home from school raving about Beyblades, and now we grab every new Takara Tomy and Hasbro Pro release on the market because Beyblade is fun as hell.

Then there's Hot Wheels – I mean, what little boy/grown-ass adult doesn’t love Hot Wheels? They released a video game this year, and we play it every single day. It won’t be too long before he’s beating me mercilessly.

My favorite so far has been Cub Scouts. I’m teaching him the ins and outs of camping and hiking, and we are getting ready to build his first pinewood derby car. And they just asked me to be Assistant Cubmaster which I accepted, assuming my patience with other peoples' kiddos holds out.

Nearly all the in-between time I have outside of these is spent keeping his 19-month-old little brother alive and out of trouble.

All that said, I continue to beaver away in the shadows, quietly – VERY quietly – amassing Griffey cards. It does happen, and somehow I was still able to scrap together more than 30 new Griffeys this year. And rank them! It’s Top 30 time.

But seriously – if you have kids, or even if you don't, look into Beyblade.

Before 2020 I was not a big grading guy, but after 2020 I feel like we are all a little more versed in precisely what a slab can do. I am putting this at the back of the list because technically none of these cards are new acquisitions; but darn it, some of them sure feel new. That PSA slab hits different…

I submitted 37 cards in August 2020, and they finally came back to me in June 2021. I am not going to show them all, but these are just a few favorites. That Finest sample cost me a mere $20 on eBay because the seller didn’t know what that little stamp on the back meant. The Sega CardGen is a true POP 1 as mine was the first ever submitted for grading. I had to give a detailed card description on the submission form and everything. The Out of This World is #/5, the 89 UD throwback is the “Reverse Negative” variant, and the rest are just plain ol’ 10’s which is a pretty remarkable thing all on its own.

There are dozens more I had graded that I would love to talk your ear off about, but we have a lot of other Griffeys to look at here. I will say that there’s one more that stood head-and-shoulders above the rest. You’ll see that one soon enough… 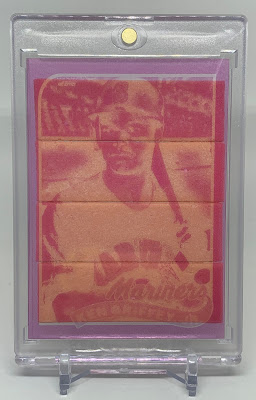 I ended up grabbing a few things from All Eras Sports this year, but this is the one that stands out. This is not a food-issue card, it’s simply….food. Griffeyfood. I have several Griffey items that could potentially attract ants, but this one is unique among those as it’s printed directly onto the edible bit as opposed to on the packaging. And it’s the ’89 Topps rookie image, no less. A novel idea that is all but certain NOT to catch on. 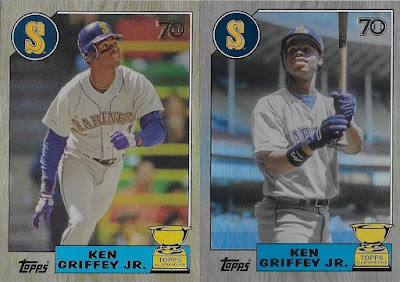 Yet another online exclusive product from Topps who you can’t really fault for striking while the iron is hot. I don’t remember the last product they offered that didn’t sell out without hours and sometimes even minutes. It’s a real seller’s market.

With so many of these online-exclusive products to pick from, you have to be a little choosy about those you want to go after. In this case the ’87 Topps “woody” design won me over. The word is it'll also feature prominently in the 2022 flagship set, so something to look forward to. 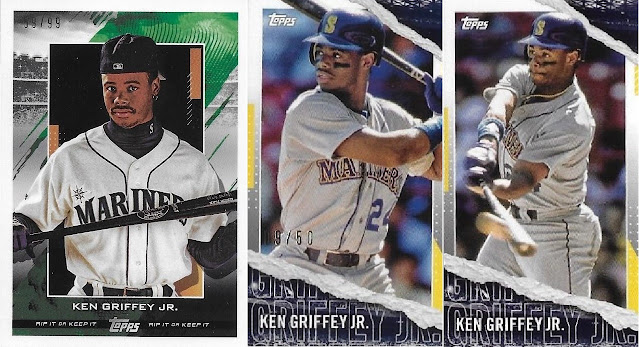 Topps took a tip from 1998 Zenith (you know, the one that helped doom Pinnacle brands to bankruptcy) and made a whole brand out of rip cards. Of course they did it a little differently: First, they introduced it at a time when everyone was clamoring for their products regardless of how hare-brained. Second, they sold it via direct-marketing through their website meaning practically zero advertising and distribution costs. And third they did it long enough after that Zenith product that even some collectors don’t remember it.

This is one of the more shameless lumping-together of multiple cards in one spot I've done, but I really do like them. The concept I could take or leave, but the cards themselves look great. That base card may be my favorite of the year, and that photo variation is apparently limited to just 11 copies per player (or so I’ve read). 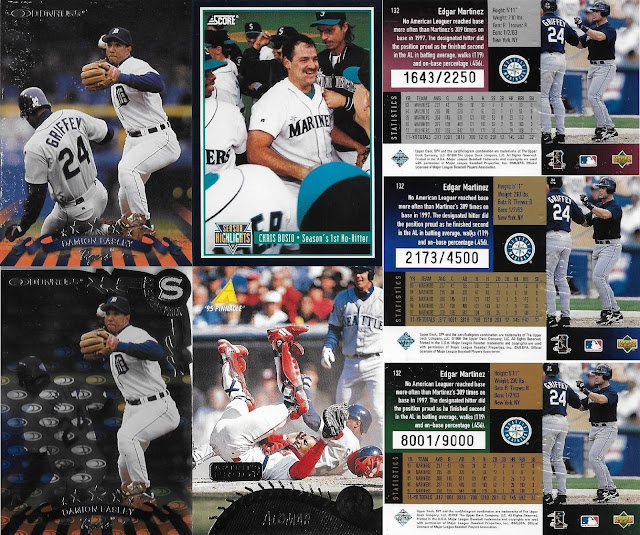 I’m a little surprised we are still finding these things - and from the ‘90’s no less. I can only assume there are two dozen more just waiting for the right pair of eyes to spot them. The Edgars, Easley, and Bosio are all new to the list, and the Sandy Alomar AP, while not new to the list, is one I’ve been after for a long time and finally tracked down own a week before putting this list together. 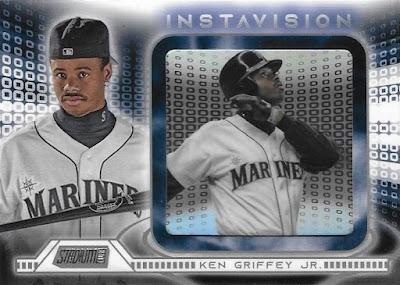 Topps got some real mileage out of that photo. This is one of those inserts that, in my opinion, can do no wrong. Of course there are a bunch of colored parallels and fancy-shamncy versions, but even the lowly base version - which is still a case hit, btw - is great enough for this list. Please make more forever. 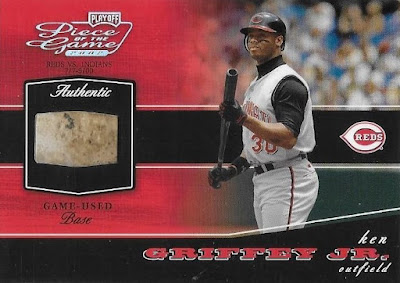 What do you look for in a base relic? Clean, white, virgin vinyl with nary a mark or scar or puncture hole from an errant cleat? Of course not. Just look at this thing. It’s a mess! And the game it's from is referenced right there on the front. Relics from this era are a dime a dozen, so I fall hard and quick for those that look like they were destroyed by baseball happening around them. Cool name plate. 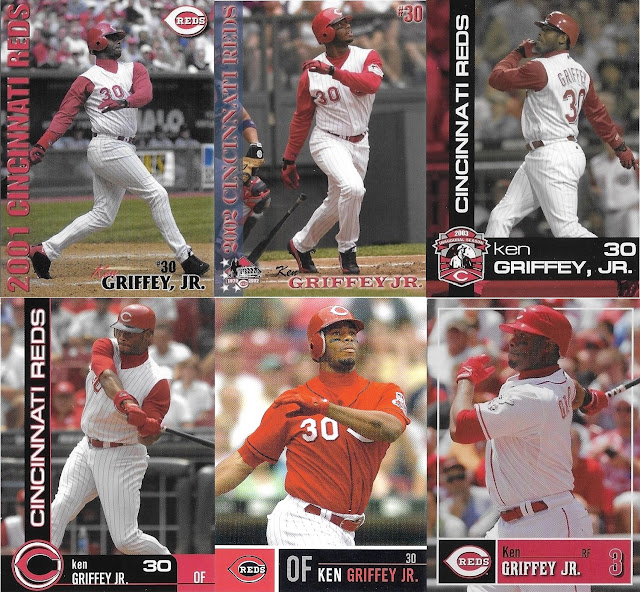 A deep love of cards from the Kahn's Wiener Company is just one of my many dirty little collecting secrets. At first glance they appear to be just another oddball food-issue, but the secret to Kahn's is on the back. You can get a peek at one here, but I'm saving the rest of these for a proper post. Kahn's deserves no less.

You Kahn's connoisseurs (all...four of you I'm guessing? Five?) may notice I am missing the 2000 card, but relax - it's on its way as my first pickup of 2022. I overpaid a lot, too. And the 2005 card I already had, but I wanted to include it here because I just love seeing them all together. I have never, ever seen a 2007 Kahn's card of anybody, and frankly I would be very surprised to learn they don't exist. Time will tell... 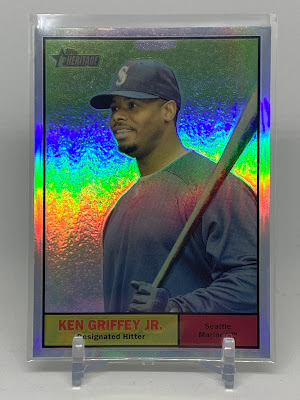 Just a gorgeous send-up of the 1961 Topps design made modern, and in Junior’s sunset season, no less. 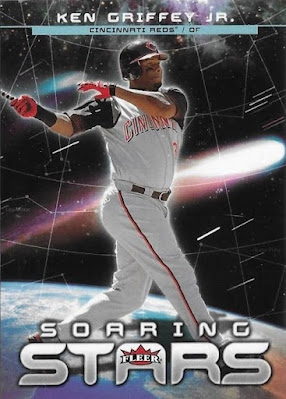 It’s a SPACE CARD. That’s it. It’s just that simple. Space cards get a pass right on up the list. Most space cards are high-gloss with plenty of built-in sparkle and shine. As was the case with nearly all Fleer cards produced under Upper Deck ownership, this one is matte with high-quality printing and plenty of color. For the record, Upper Deck-era Fleer does not get enough attention in general.

Nothing too crazy yet, but some nice ones coming up. Stay tuned...!