Fleer deserves our respect as collectors.  It is the only non-Topps brand to have operated independently both before and after the 1981 MLB rights expansion.  They put out a ton of cool inserts and interesting sub-brands that covered the entire spectrum of design.  It really is one of the greats.

That being said, I’ve dreaded making this Timeline.  As you may know I try to quantify each brand with a few paragraphs in the beginning such as the one you are reading now, but this one is a broken mess.  During the upheaval of the industry in the late 90’s Fleer went into nutso mode with no fewer than 25 different sub-brands popping up during a 5-year period, and then in 1998 they stopped making a flagship base set.  At this point it could be argued that Fleer Tradition became the flagship set during those years (this is Baseballcardpedia’s stance), but the existence of the overlap in ’02 and additional sets in ’06 and '07 would make the OCD purist in me chew all his fingernails off, not to mention the fact that the design of Fleer Tradition takes on a life of its own in the early 2000’s.  For the function of the Great Griffey Base Card Project and the sanctity of all Design Timelines covered therein, Tradition is its very own brand.

So was this a Footprints situation wherein when times were hardest, Tradition “carried” the flagship designation?  That is a question for another Timeline.  For now, sit back and, er, enjoy the slow demise of a once-great cardboard institution.

Here is every Fleer flagship base card that ever featured Mr. Griffey:
1989: 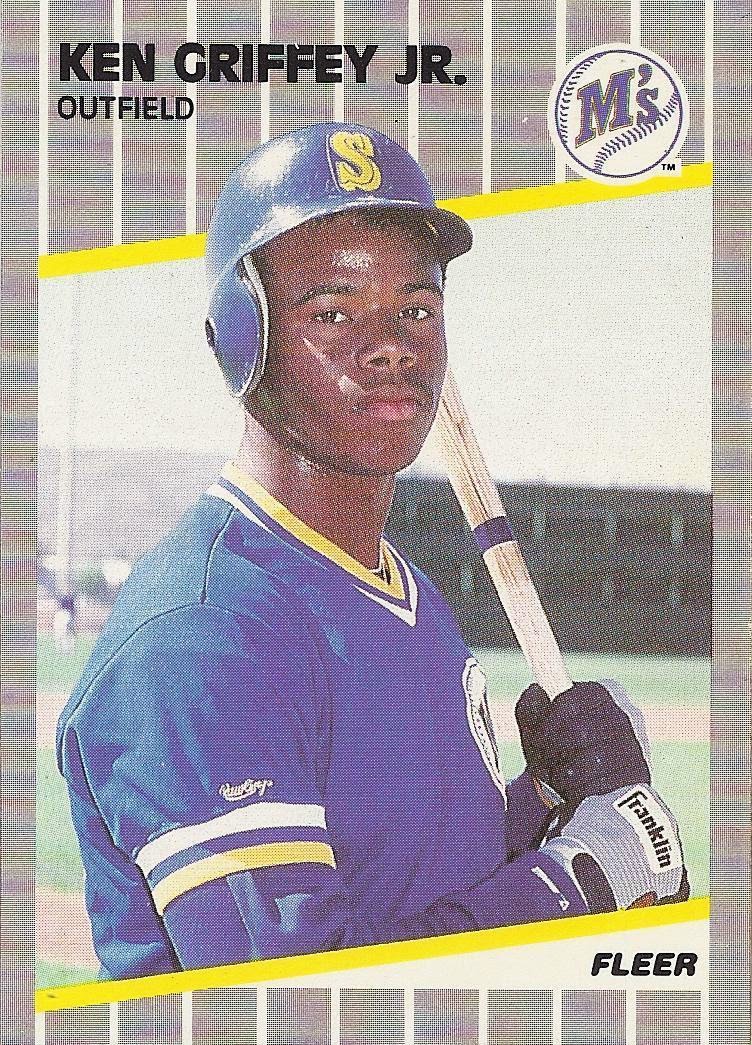 I grew up with '89 Fleer, so I never took a serious look at just how radical a design it was for its time until now.  Unique and modern, it's a full-bleed field of pinstriped gray in lieu of a standard border.  The inset is a picture with a team-colored half border.  The picture superimposes over the gray field in the top portion which was certainly unique for the 80's.  This set was printed on white cardboard, but you would never know it from the front with all that stuff on there. 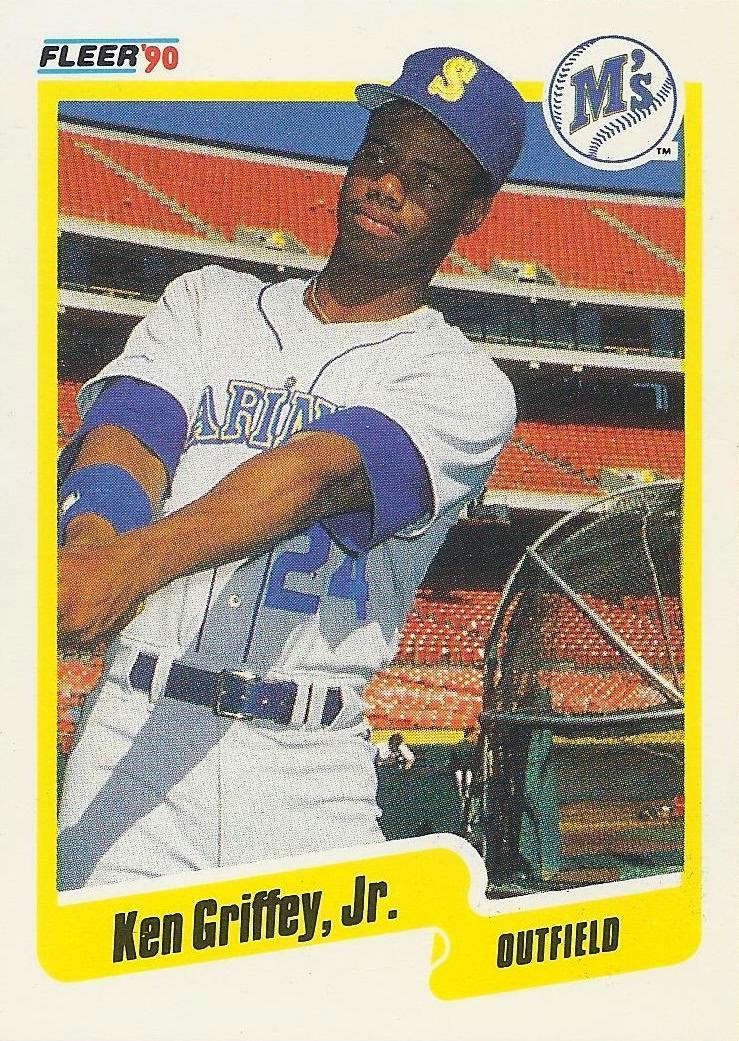 Nice team-appropriate banner against a bright white border, made even whiter by the use of white card stock.  Paper like this as opposed to brown, pulpy cardboard used to mean higher-quality (a la Tiffany and Upper Deck), but sadly the vast overproduction of this set gives it an air of cheapness. 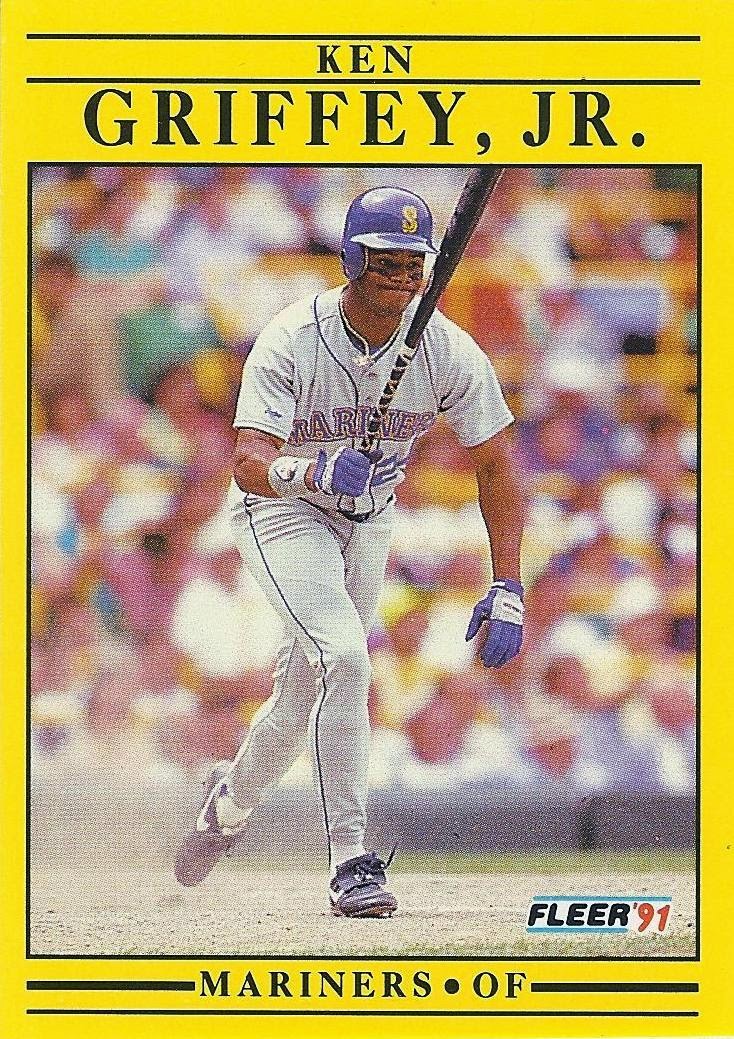 I really like the design here.  All the elements are centered and balanced, it’s got the perfect application of Times New Roman, classiest of all fonts, and those accent lines tie the whole thing together nicely.

There’s really only one problem: this set here is frickin’ yellow as shit.  The whole thing, too, not just some cards or some teams - every damn card.  Yankees, Reds, Expos, you name it.  And it's not like a nice antique yellow maybe with a tinge of gold or something – no, this is more yellow like a school bus fire.  Yellow like Big Bird crashing a taxicab through a lemon grove.  Yellow like being water boarded with mustard.  Yellow like a Simpsons orgy.  Yellow like that Beatles submarine in an ocean of pee.  It’s a shame that someone at Fleer thought this particular shade of yellow was baseball-y when it’s really the cardboard equivalent of someone gouging your eyes out with a banana. 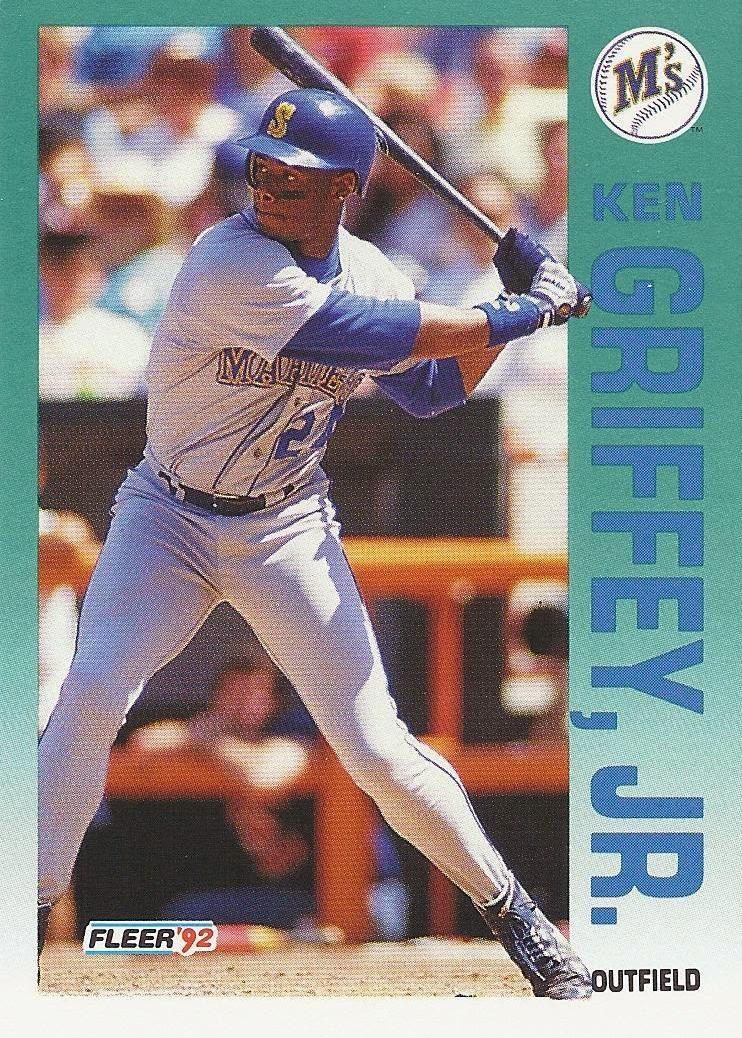 A lot of brands go through a vertical nameplate phase, and Fleer is no different. The first of two, this nameplate is a monster, running almost the full height of the card.  The field in the background is a split-fade from teal and white.  I've seen this same split fade color scheme on numerous custom Chevy Suburbans of the 90's.  The font color in the nameplate is the only color that differs among teams.  Sadly, Junior got one of the worst-colored fonts for that background - the "Ken" and the first part of the "Griffey" fade into the card.  People defend this set to the death, but the truth is it makes fun of colorblind kids. 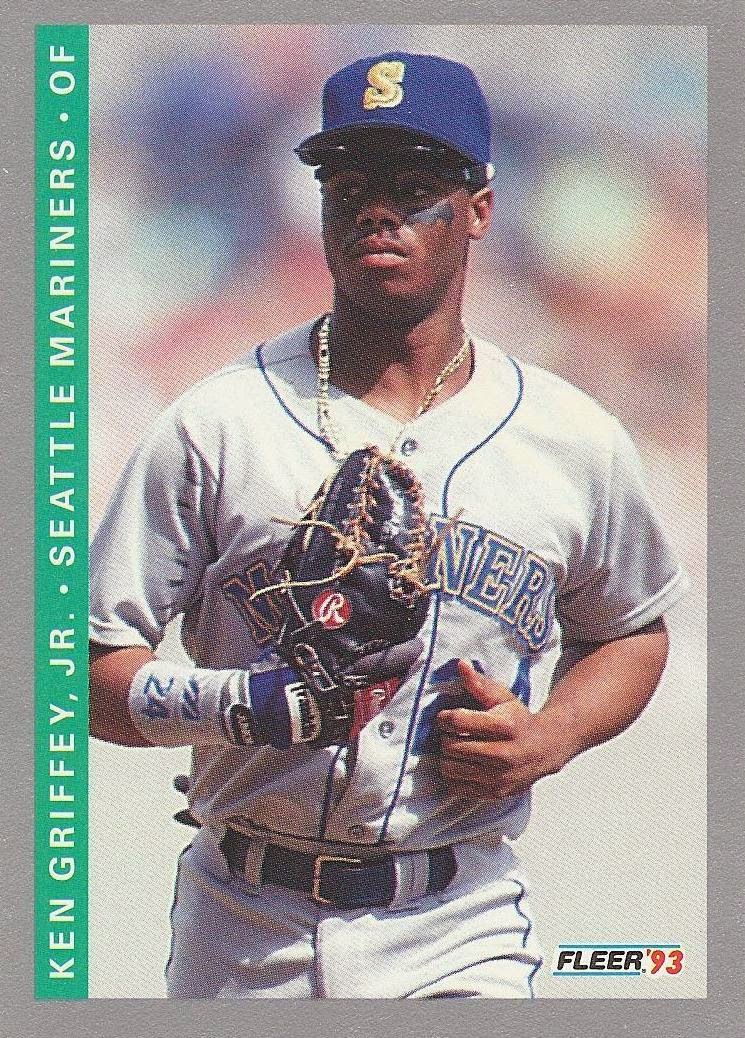 Simple almost to the point of being boring (again, almost), here is the other vertical nameplate in this timeline.  The design lets the photography do the talking, and while other brands did do it better there are indeed some solid shots in this set.  I like the silver border a la early Leaf, but there isn't much design to talk about here.  Night Owl says that nameplate reminds him of a Hershey's Kiss wrapper.  It's kind of all I see now. 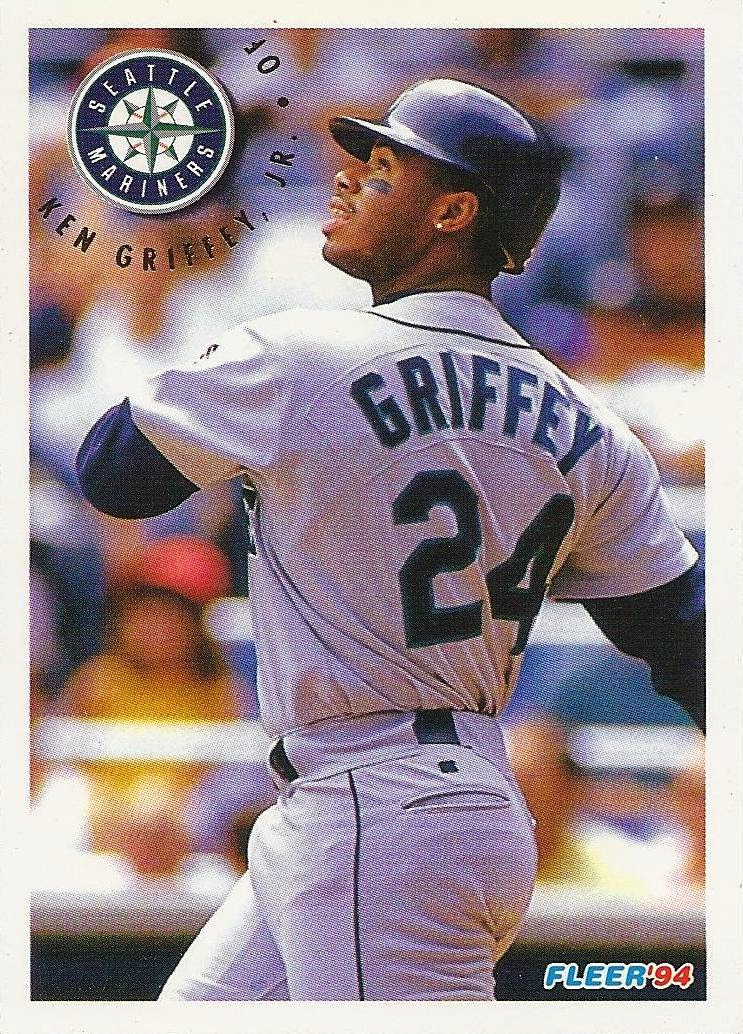 This is actually a beautiful card, and the design seems to be enjoying a resurgence of popularity among collectors.  What in ‘94 must have seemed like a snoozer what with all the fancy new designs and more advanced use of gloss, foil, and effects now has a dignified simplicity that works beautifully with the photography.  Dig that big ol' floating logo and tasteful use of gold foil.  This is a favorite.

And then someone at Fleer decided to throw simplicity out the window... 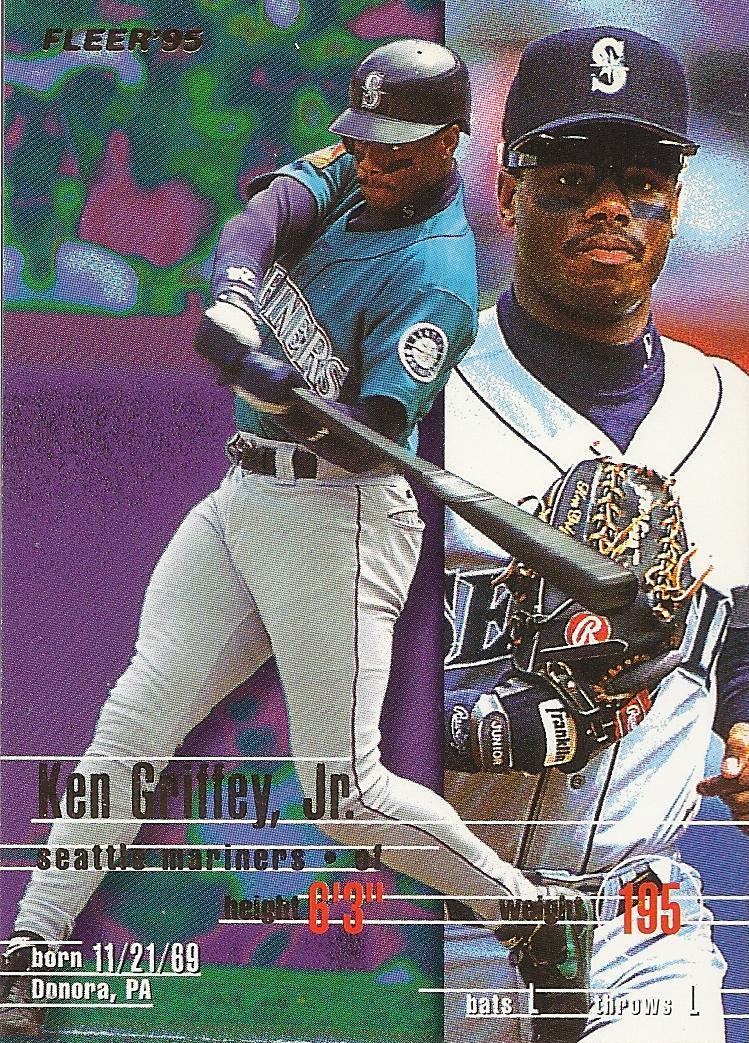 Let’s get this out of the way now: ’95 Fleer is almost universally despised.  I say “almost” because there are at least three collectors I know of who like ’95 Fleer, and I am one of them.  The base set is made up of six designs, one for each division in baseball.  Each of the six designs has elements that tie it to at least one of the other five - that Predator heat-vision effect is one of them.  When people talk about hating ’95 Fleer, I think they’re talking about two or three of the designs.  I say that because this Griffey card is awesome.  Bold?  Yes.  Busy?  Certainly.  But is it an ugly card?  Shut up. 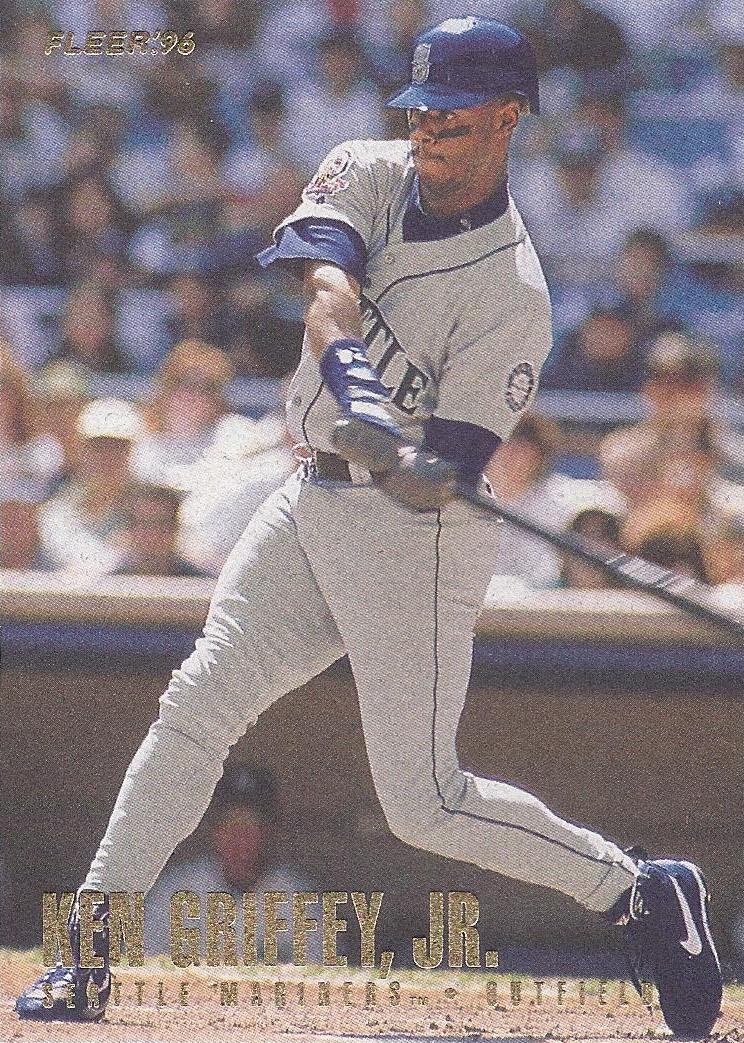 The matte of the card stock this year was the central design element.  In a world where glossy card stock was now the norm, Fleer flipped the script and put out these raw paper base cards with a small amount of gold foil text and nothing else.  The cards feel thin and soft, and the matte printing makes the photography appear washed-out; but I still think this is a pretty good-looking card.  I have a distinct memory of the smell of these babies – fresh paper like an Airport magazine store. 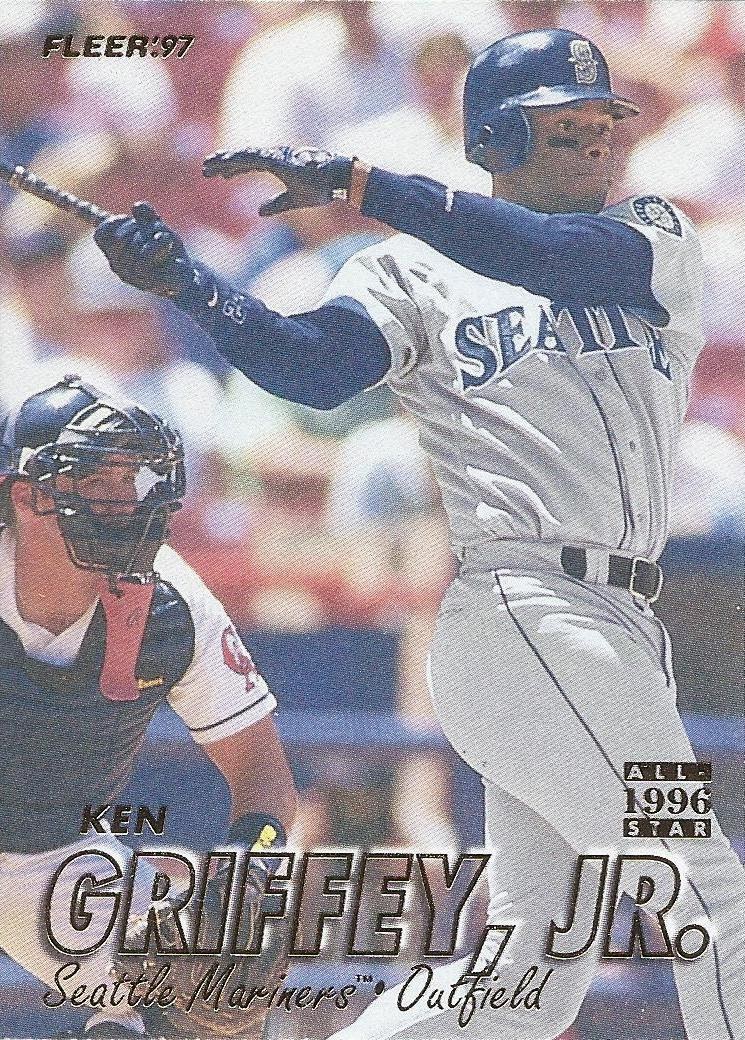 Really, it’s the same thing as last year but with big, stylized lettering that is awkwardly-placed.  The cards point out each player's All-Star designation, but that doesn't save anything.  The Tiffany versions from this year are hella-rare, but they do look better.

Thus the original Fleer timeline comes to an end with a fizzle.  I don’t want to believe this matte thing was the make-it-or-break-it idea that sunk the Fleer flagship brand, but I can’t imagine how it wasn’t.  My belief is that this was a brand scrambling for an identity that had already been usurped by Fleer Tradition.

I know I’m talking like this is the end of the timeline.  Well, it isn’t.  Somebody buried Fleer in the Pet Sematary, and it came back evil. 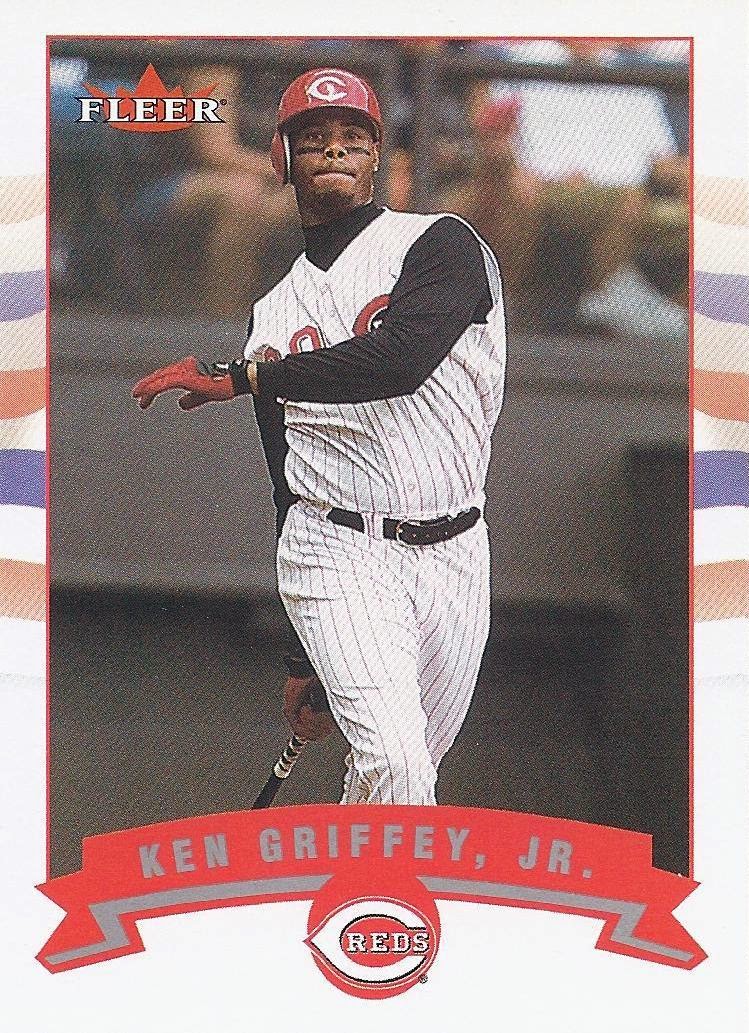 There are a few elements (apart from the whole throwback movement) that are common among post-9/11 card designs in general: clean, classic layouts; liberal use of banners and stars; and a whole lot of red, white, and blue.  This design is the quintessential one of those.  It’s square and centered and miserably inoffensive.  I like the banner (as I often do), but the team logo looks weird and off-register.  I like the idea of bringing the crown logo back, but it also doesn't look right.  A misfire, but a patriotic misfire – hard to criticize that.

And with that, Fleer forever abandoned the idea of a flagship brand, opting instead to focus on Tradition and its plethora of other sets.  And yet... 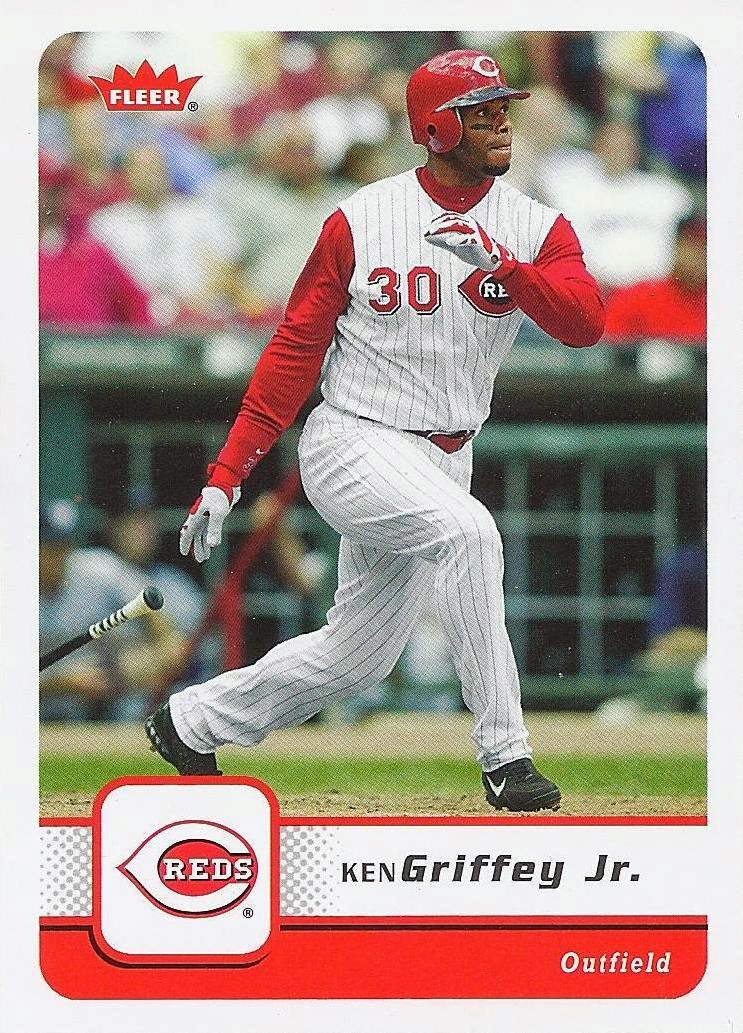 Upper Deck had different ideas.  They acquired the Fleer brand and released the remaining two Fleer sets in the timeline with little fanfare and no apparent effort.

This is not an unattractive card, but it reminds me of those early-2000’s Donruss designs, all safe and boring.  There’s no edge, no character, and in this set’s case a whole lot of white border.  I do, however, like the light shadow around the team logo box to create a simulated 3-D effect, and they finally got the crown logo right.  Overall the design is modern and clean.  Really, really clean.  I'll go ahead and call it sterile. 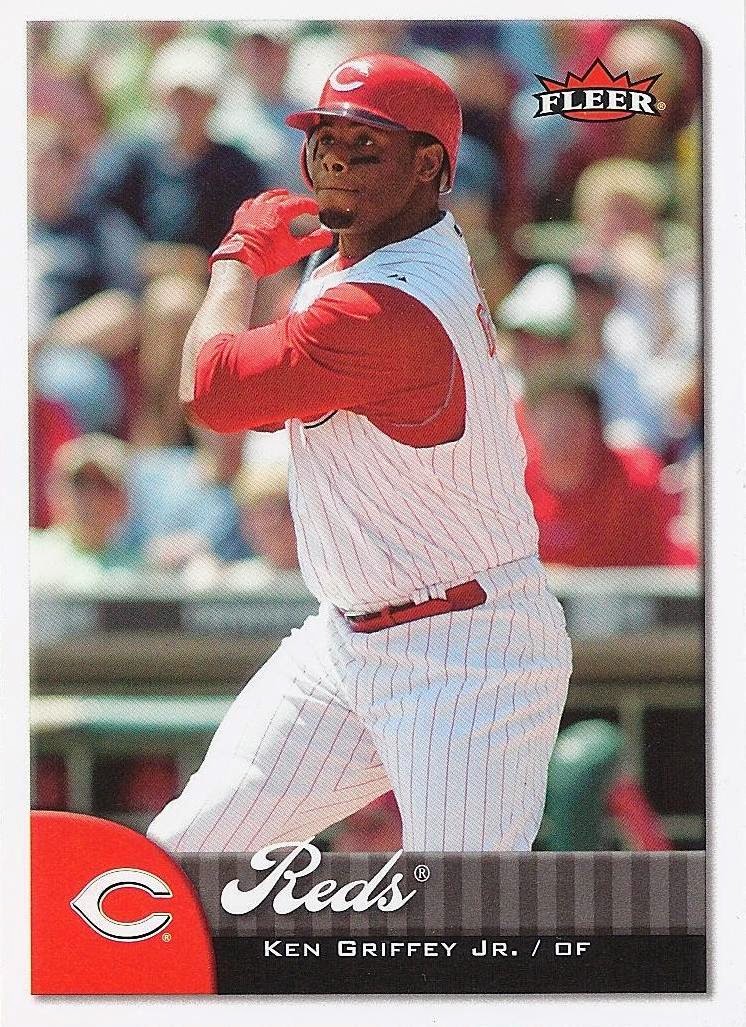 This is a little better.  The corner-mounted team logo, the team name in script above a field of pinstripes (aka “lines”) add a little style to what is still a very boring set.  It’s a shame, too, because Upper Deck made some pretty cool cards in ’06 and ’07.  If those sets were food, 2007 Fleer would be government cheese.

It is with this set that the zombie that is Fleer flagship finally met its end via rule #4: the double-tap.


Like the third Lord of the Rings movie, this timeline should have ended several times but just kept on truckin'.  I bet there were a lot of collectors back in '06 who hoped Upper Deck would bring the Fleer name back to its former respectability, but we all know what happens when a brand gets resurrected by another brand.  Even now in 2014 history seems to be repeating itself.

Fleer gave us some excellent cards over the years, so I'm very conflicted about how they got out of the flagship game.  Tradition has a solid timeline, too, but why the shift in focus?  They were one of the few with a real history to back their cards up.  The '89, 94, and '95 cards are bright spots, but overall this is a pretty disappointing timeline.

Here is every Fleer flagship base card design in order from 1989 to the brand's shuttering in 2007: 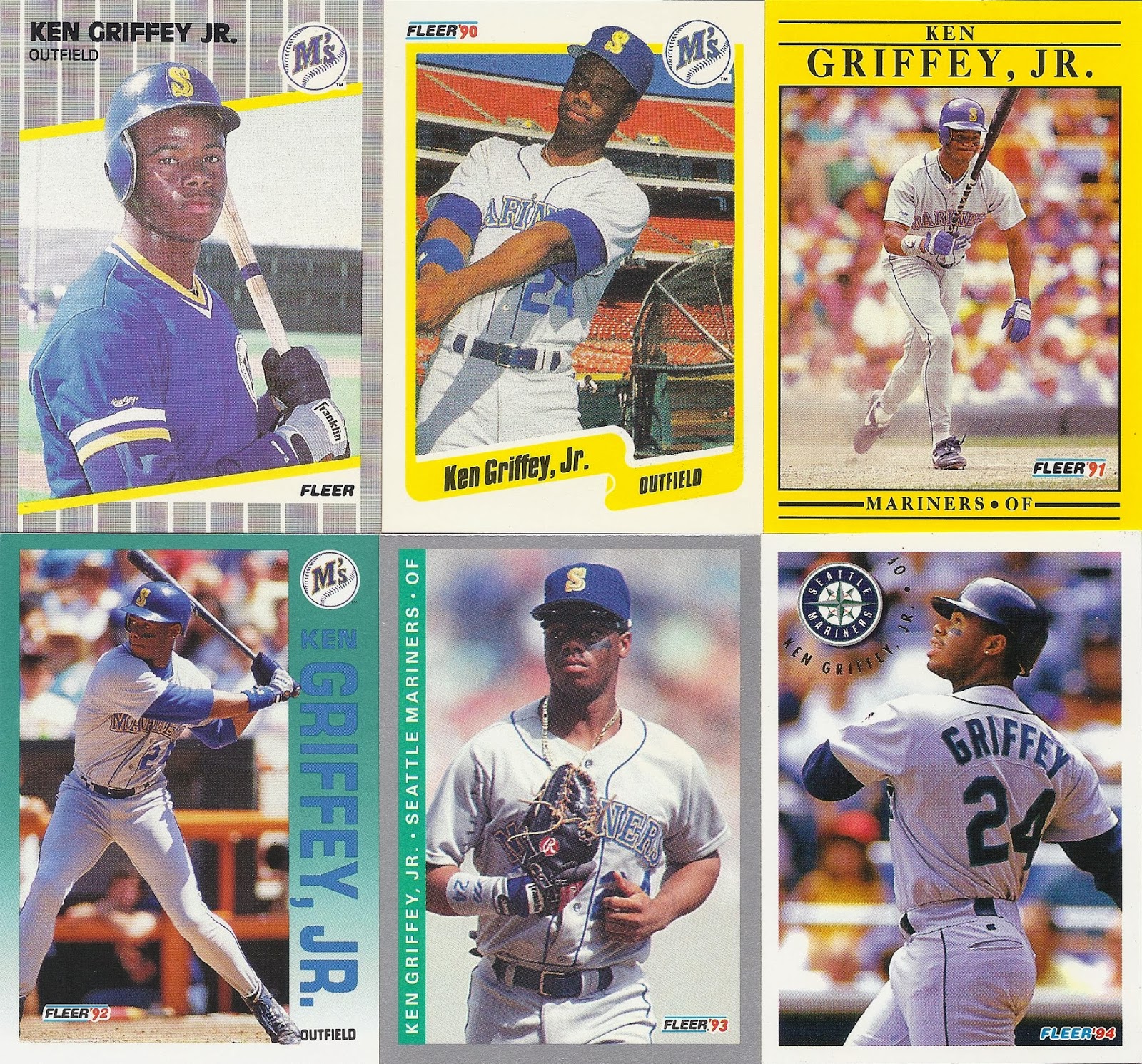 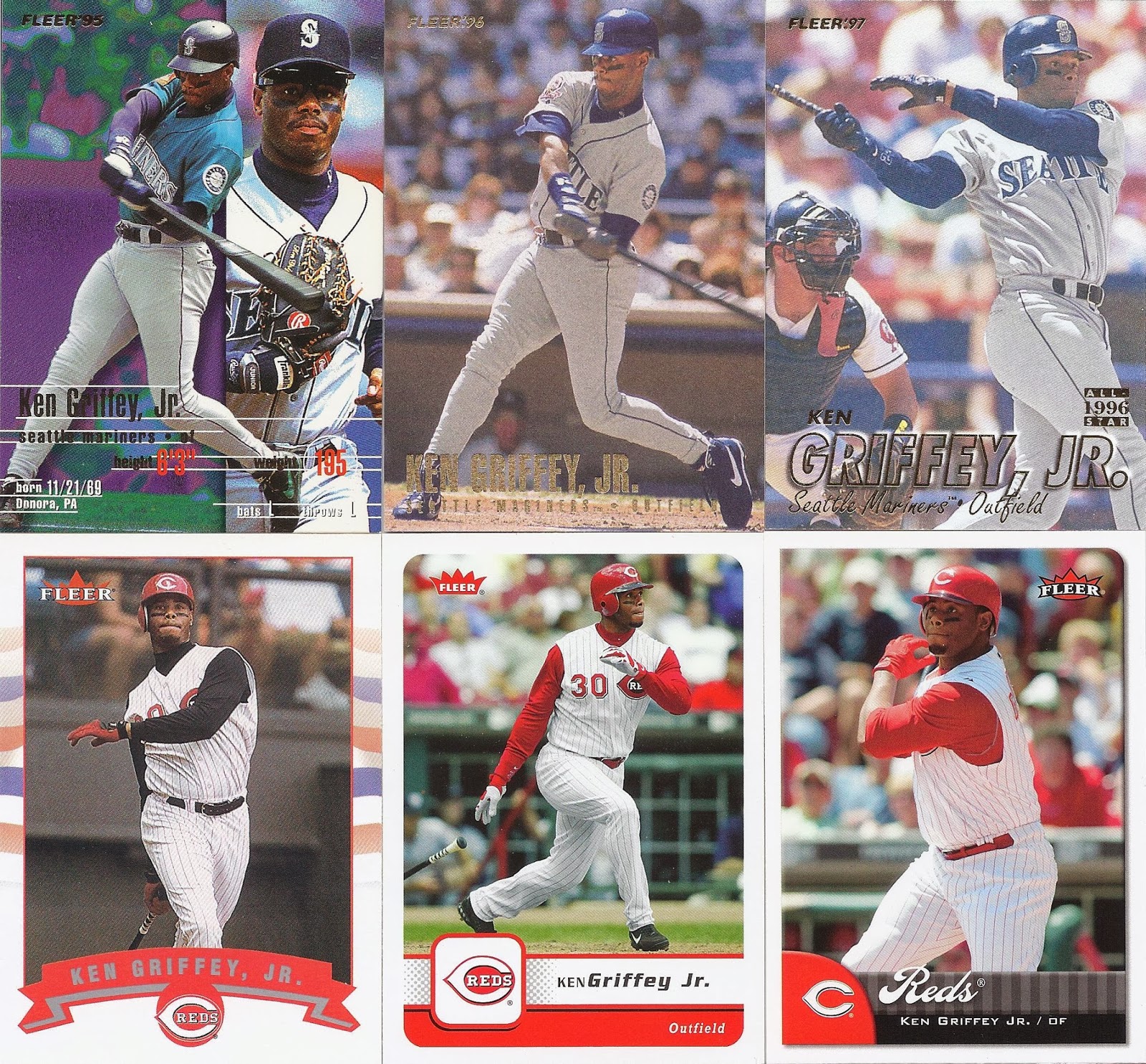