I am working on one gigantic new addition to The Junior Junkie.  It’s something a lot of player collectors realize they need to do at some point; but depending on how many different cards you have of that player, it can also be grueling and time-consuming.

I made the decision one day earlier in the year to expound on what was previously a list of only those Griffey cards that had been properly showcased, meaning shown with large, high-quality scans of the front and back and written about snarkily but with much respect.  Instead, the new list would include ALL the Griffeys in my collection.

I began cataloging my cards that very night, powering past 1989 and through the end of 1991.  Then two weeks of Mardi Gras and a week on vacation happened, and the project came to a screeching halt.  Since then, though, I have been able to make significant progress on weeknights in front of the TV.  I have now completed all the Griffeys through 1997 and partly into 1998, and I am nearly halfway through the nine 4” Griffey binders that house the bulk of my collection.  I am optimistic that if I can keep with it, I can have THE BEAST completely up-to-date in the next 2-3 weeks. 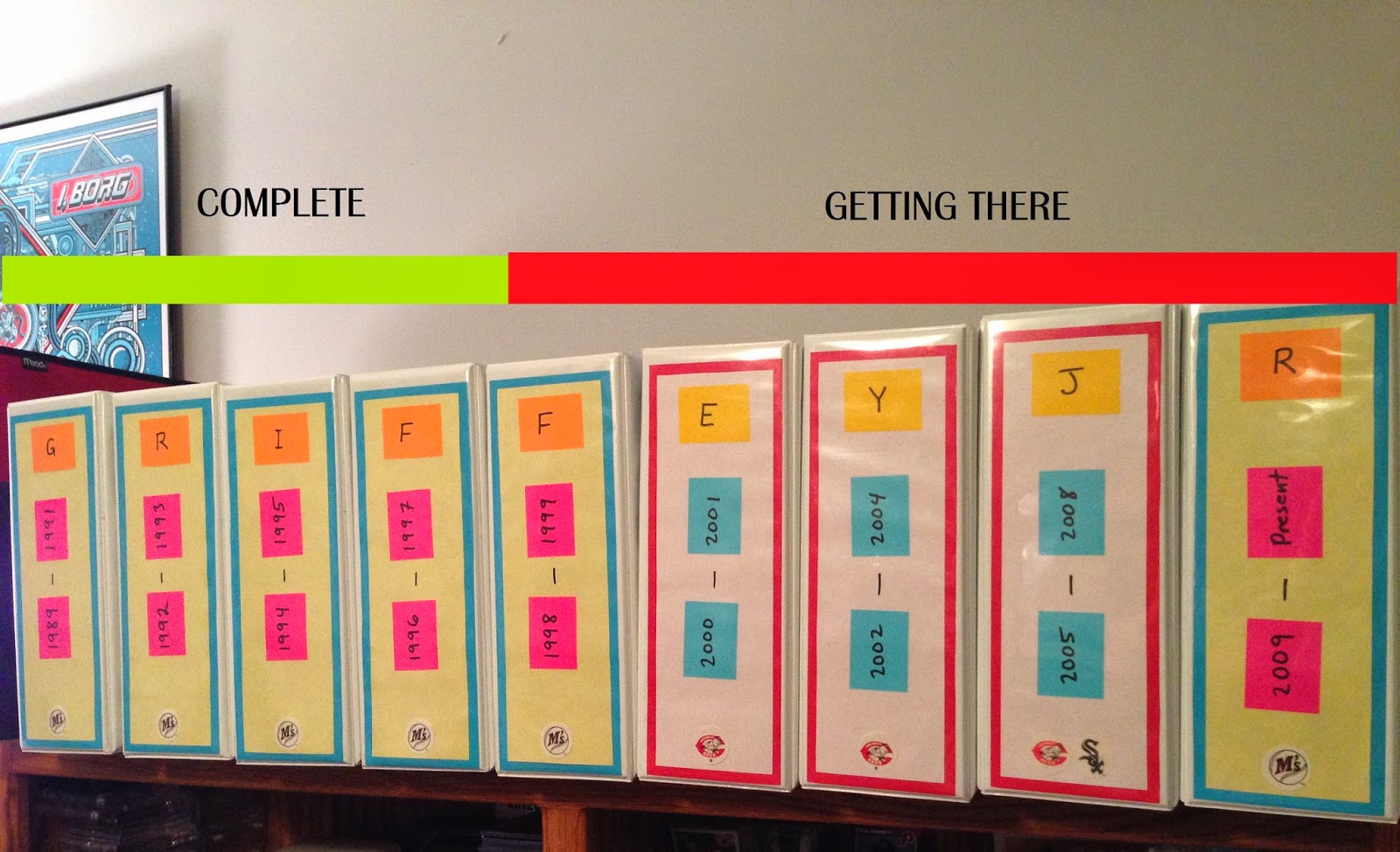 The project is not without its difficulty.  The earlier years of Griffeys presented the problem of cataloging oddballs which can be problematic.  Sometimes the cards are just little rectangular photograph with a simple name plate and nothing else.  Many have blank backs and no brand name.  Despite all that, I could knock out the early 90’s years in an hour or two thanks to the relative lack of variety within brands.


Now I’m in the late 90’s, and the process is getting truly time-consuming.  Whereas the Griffeys of the early 90’s lacked variety within brands, by this time there was lots of variety within brands as well as among them.  All the inserts and parallels and complicated multi-tiered checklists make cataloging a real task.  The thing giving me the most trouble is figuring out which inserts go with which sets.  For example, in 1998 Pinnacle made lots of sets with several inserts each, so how do I know a particular insert is regular Pinnacle and not New Pinnacle or Pinnacle Certified?  It’s getting messy, but I think I’ve got it pretty well wrangled with the help of sites like COMC, baseballcardpedia, and even eBay.


One thing I’m looking forward to now that I’m going to have all my Griffeys in a single list is that I will now be able to look up those cards I need in places like card shows and while card shopping at work (yeah, sometimes) or on my phone (great fun while waiting for the wife to try on clothes or during trips to the post office).  Until now I’ve been notorious for buying dupes of cards I already have, but now I have no excuse.

Another advantage of a complete, one-stop catalog of the collection is that I can delete the confusing, misguided, and woefully incomplete “Griffeys I Need from the Sets We’ve Seen So Far” list I had created.  It was meant to be a list of Griffeys I still needed just from the sets I had already showcased  on the blog, but it came across as though those listed were the only Griffeys I needed which couldn’t be further from the truth.  Now anyone can check one list and see if the Griffey they have to trade is one I need.  They can also link directly to the post that discusses said Griffey and maybe learn a little more about it.

I did go in and change what that above-named list now links to....


A fun side effect of assembling this list is that I have been able to spot a lot of Griffey base cards I still don’t have as well as lots of inserts and parallels that should be gettable on the cheap.  I’m filling holes on the fly like mad via COMC.  For the cards I cannot get I plan on starting a whole new list of most wanted Griffeys that will be differentiated from a separate list of Holy Grails.