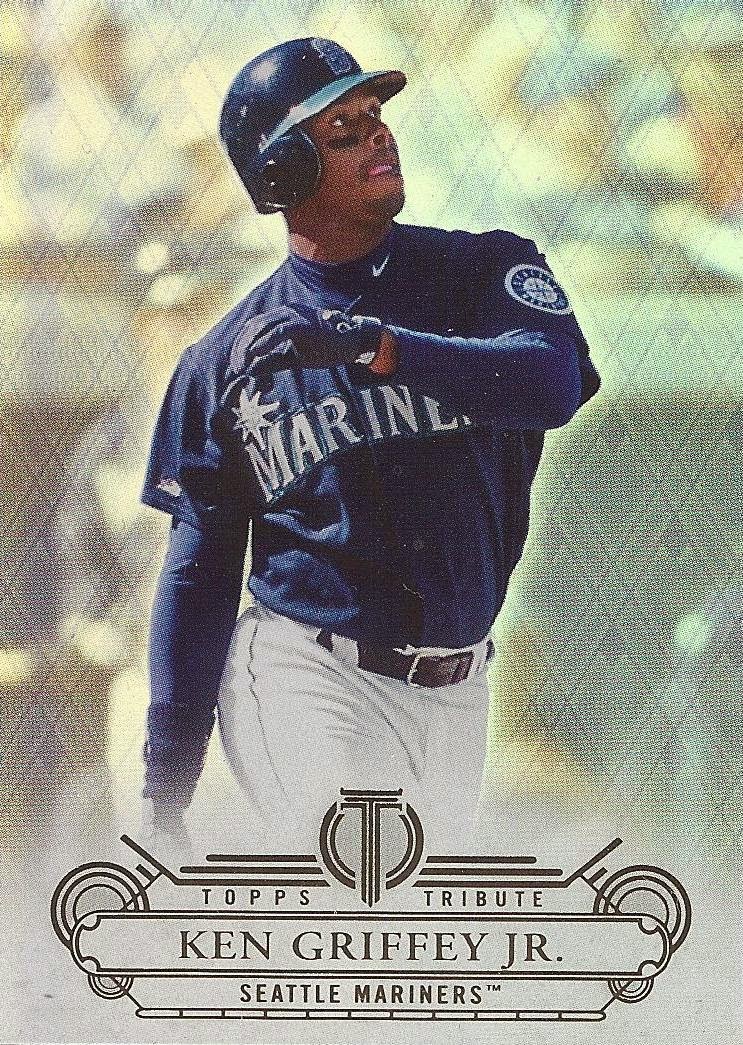 Is this a good Griffey card? Yes.  Topps Tribute base cards tend to be.  There's no denying that.

The set: Critiquing Topps Tribute is like critiquing a Faberge egg – even the worst one is still pretty nice.  These little works of art push the wow factor is every way: highly refractive, high-gloss, super thick, weighty, balanced.  Referring to the non-parallel base cards from this set as “commons” would be a serious misnomer.

The base checklist is only 100 cards; and the packs contain at least one autograph or relic, so they fetch a high price ($40.00 for a 3-card pack).  All this makes Tribute one of the most exclusive base sets in the industry, perfect for busting packs on your yacht, in your Tuscan Villa, or on your private Caribbean island.  I feel for set builders here.

Let’s do the math: a pack contains a maximum of two regular base cards.  At $40.00 per pack (assuming no duplicates – yeah, right) means a pack-breaking set-builder would have to spend $2,000 to build the base set.  I realize no collector in their right mind would do it like this; but considering you can usually pull an entire base set of most brands from one box, maybe two or three, these numbers are amazing.  Such is the realm of the super-premium.

Then again, those other sets don’t include a card featuring Dizzy Dean’s belt buckle.  Pretty hard to compete with that. 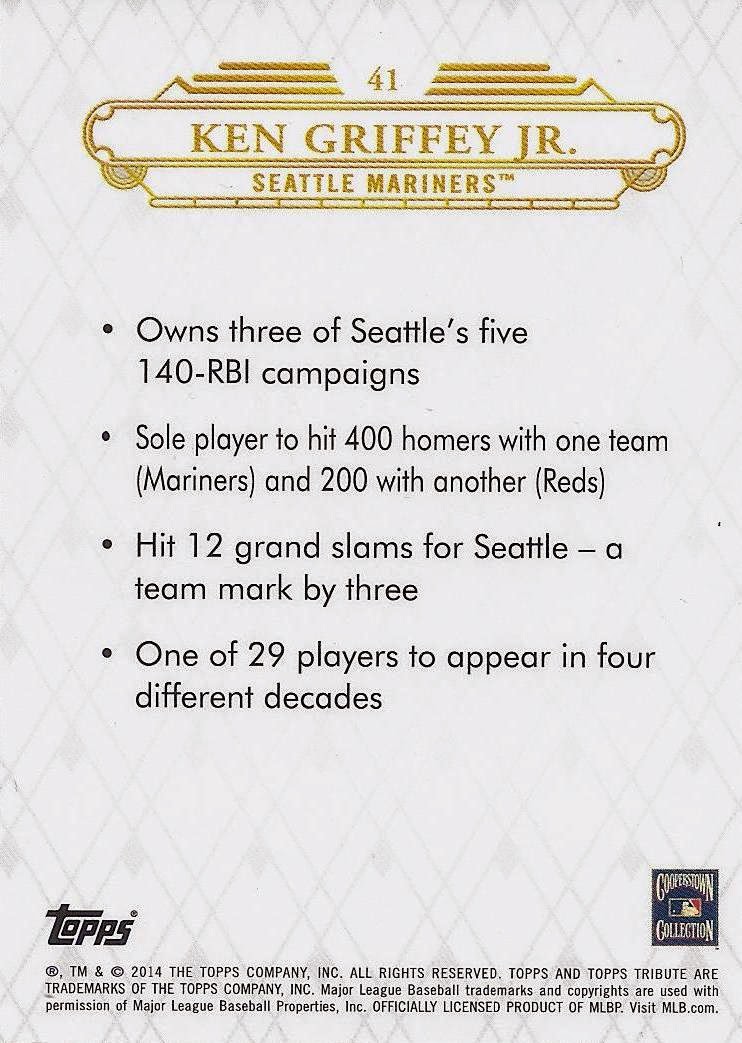 It’s amazing to me how little the Tribute design has changed through the years. When I heard these cards were out I quickly found an image of the Griffey and thought, “Of course that’s what it looks like. That’s what it always looks like.” Then again if you’re going to repeat a design, it might as well be this one.

As you can see the nameplate itself is reasonably different from previous years and probably my favorite so far in the Tribute timeline.  In addition to the excellent tongue shot, Topps also threw in a field of elongated diamonds in the background that carry over to the back of the card.  It's a great look.  The fact that Junior and everyone else in the background is watching the same moonshot over the center field wall only adds to the card's overall greatness.  In fact, I like this card so much that I had to have it in blue:


It’s not quite Mariners blue, but it’s close.  I was also lucky enough to land one of the relic cards without being sniped in the last 7 seconds of the auction: 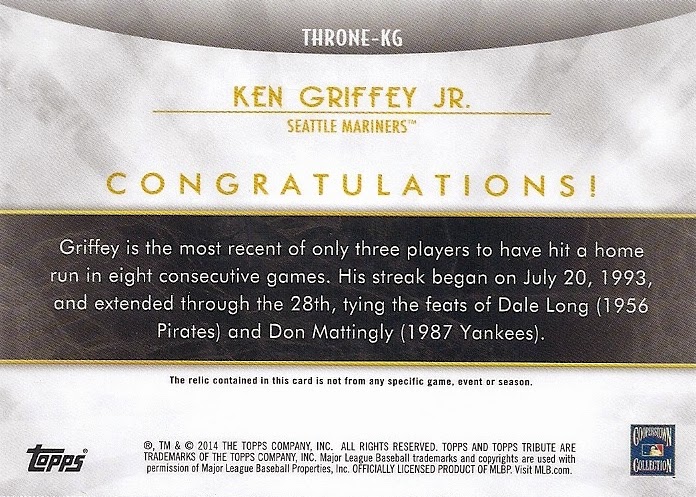 The swatch may be plain white, but I dig how it’s presented.  A lot of sets just stick the relic in a square somewhere on the card – Tribute rings it in gold sword-thingies above a curved granite something-or-other.  I think the overall effect is supposed to be a throne room.  Whatever it is looks nice enough.

That being said, I hate, hate, hate the recycled photography.  I would like to know the rules/costs behind the use of photos on cards.  I can’t imagine how difficult/expensive it must be for them to keep angering collectors with the same old pictures.  That one on the left is so blown up it’s become a blurry mess.

There’s really only four Griffey cards in the whole of 2014 Tribute, and I have two of them.  Everything else is just parallels.  Here are all the Griffeys I am missing from 2014 Topps Tribute:

If we include printing plates, that’s THIRTEEN 1/1’s.  Harumph.  Anyone spending $40 a pack on Tribute and pulling Griffeys, please hit me up for a trade.  I'm a lot more likely to spend that money on a bottle of single malt.
Posted by The Junior Junkie at 11:52 PM