Not All That is Gold Glitters: 1997 Pinnacle 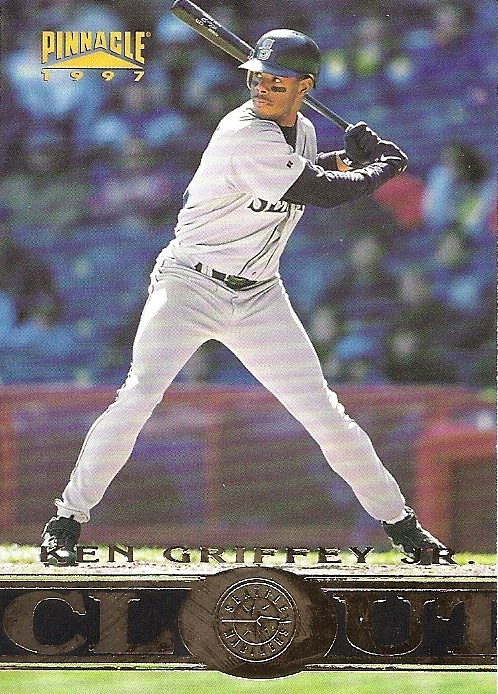 Is this a good Griffey card?  Yes.  In a set full of gaudy base cards, Junior got away with a reasonably attractive subset appearance.

The set: There is no regular base card for Junior in ’97 Pinnacle.  This is probably for the best as it’s not a very good-looking set despite some pretty cool parallels and great inserts.

For three years in a row Pinnacle went with a prominent gold foil nameplate.  These nameplates evolved from the curvy baseball stitches of 1995, to the textured triangles of 1996, and finally to this angular job.  I realized while writing this post that it’s supposed to be a baseball diamond, but that doesn’t make the overall effect any less garish.  And if you’re thinking it’s not so bad, you should see the horizontal version. 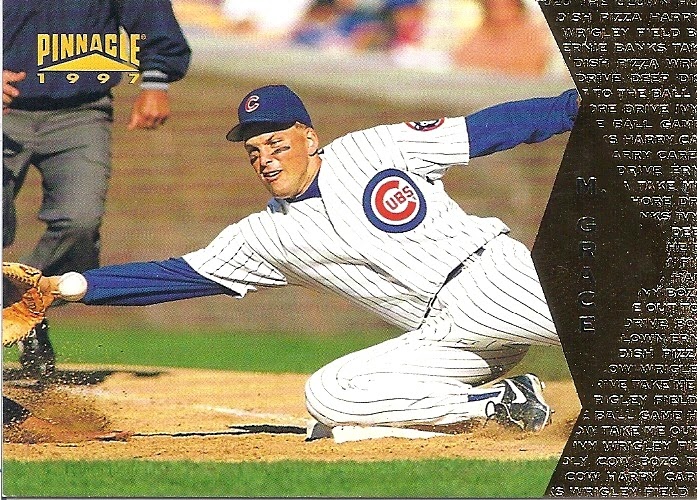 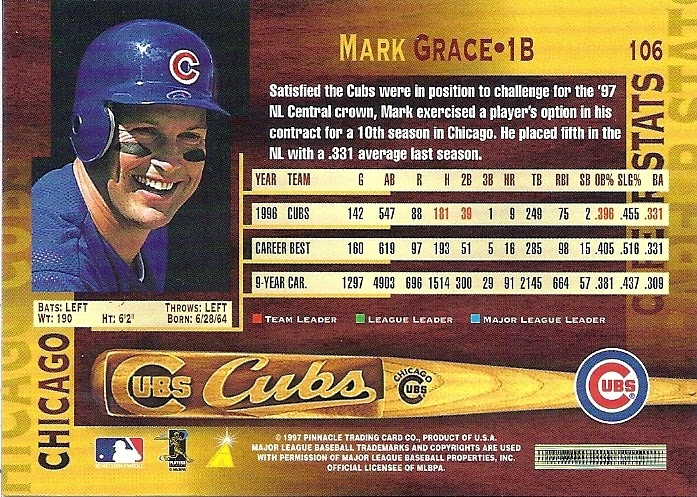 The backs are warm and with that cool engraved bat on every card.  The stat box is a little less stat-boxy than I'd like, but the overall look is solid and cohesive.  You can't really complain about the photography in this set, either.

One of the design elements I’m on the fence about is the inclusion of tiny text in the nameplate.  There you can find a field of buzzwords that correspond to the player’s team.  For example, Jeff Bagwell’s card includes words like Astrodome, Colt 45’s, Galveston, and Astroturf.  Reading this text can be hard on the eyes on the regular card, but they become a lot more legible in the Dufex printing of the Museum Collection parallel. 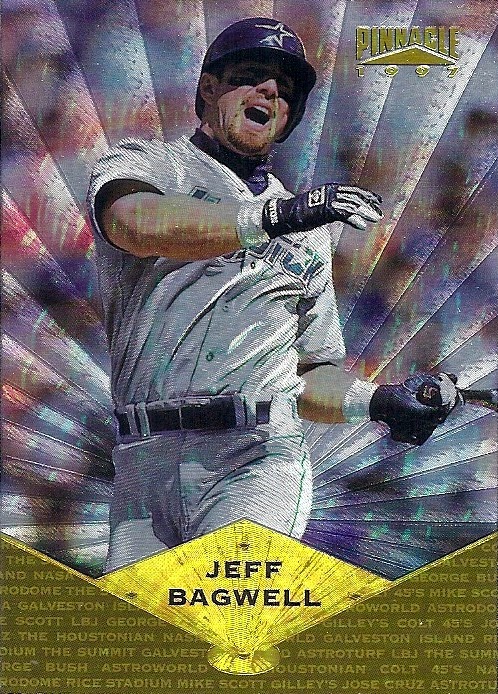 Fun fact about the Mariners cards: a few of the choice words in that field of text include Junior and The Big Unit.  Hence, every Mariners base card in 1997 Pinnacle references our guy.  And Randy Johnson.

These cards are notorious for a buildup of white film on the flat areas.  These same areas are also susceptible to fingerprints.  Luckily this film tends to wipe away pretty easily without damage to the card, but the fingerprints are another story.  Be careful with your '97 Pinnacles, guys.

In lieu of a second series, Pinnacle rebooted with the brand New Pinnacle.  Because of that we only have the Clout subset to sustain our Griffey base card lust.  For what it’s worth: 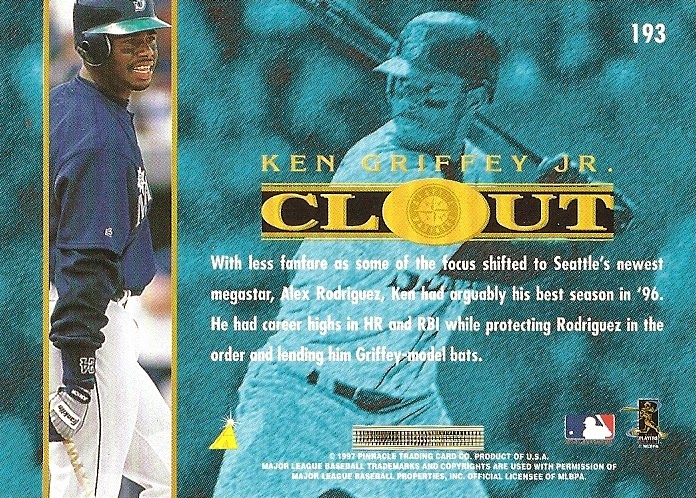 I really like the photo they used.  You can really see the potential energy that’s about to be unleashed on that hapless baseball.  It’s also impeccably even and centered, giving an air of stability and balance.  Apart from that there’s not much to say about the design itself.  It doesn’t stray far from the aesthetic of the regular base design with the bottom-mounted gold foil nameplate and centering.  If I didn’t know better I would guess that this was a prototype for the next year’s base set. 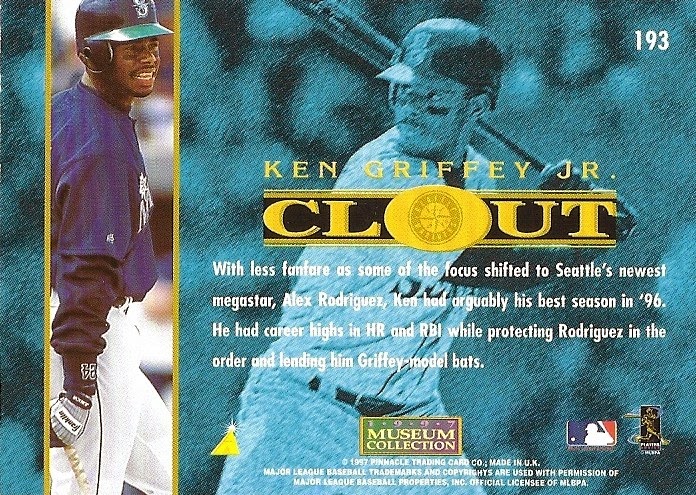 I can’t say anything bad about this Museum Collection version.  They went with a horizontal stripe pattern that mirrors the horizontal line theme of the card.  I probably would have gone in a different direction when it comes to the Dufex pattern, but the effect is great.

What Pinnacle missed in the base set it more than made up for with some very unique, personal inserts.


When this insert came out the Beckett used to include a photo example of every kind of card with the listings, and I used to look at this one and drool.  What a cool idea and a solid execution - definitely one of my favorite inserts of the 90's.  I believe these were listed at $40-$80 at one point just for the awesome factor.  I just bought this card this year, and I spent way more on it than I do most Griffeys – around $3.00. 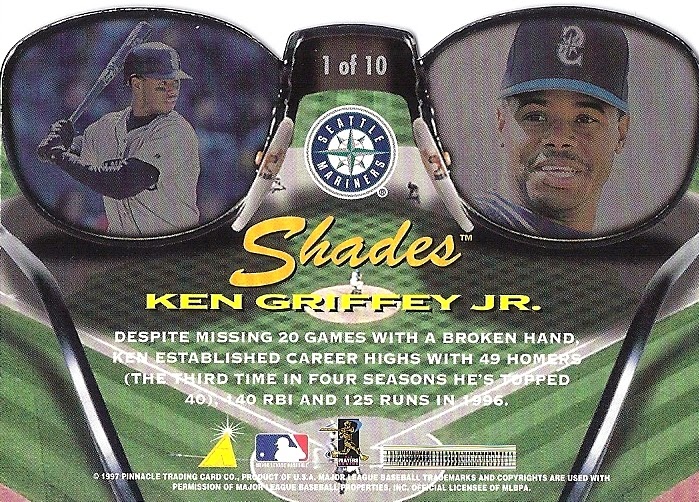 The die-cut shades insert was also very highly valued in its day.  Luckily I waited to buy and was able to snag this one fairly recently for a couple of bucks.  It's an incredibly shiny card, so it doesn't scan well.  In person, however, it's a real gem.  It might seem strange that he’s looking at himself in this image, but that just adds to the fun.  Maybe he’s watching himself on TV?  Sweet mustache close-up.

Here are all the Griffeys from 1997 Pinnacle that I need:

I am ashamed about how few of the inserts I have from this set as I used to buy it all the time, waiting for a Griffey pull that would never come.  I mean I probably got one of the Clout subset card or something, but I was too young and stupid to figure out back then that there was no Griffey base card. I was also too young to understand what tacky means.
Posted by The Junior Junkie at 11:24 PM