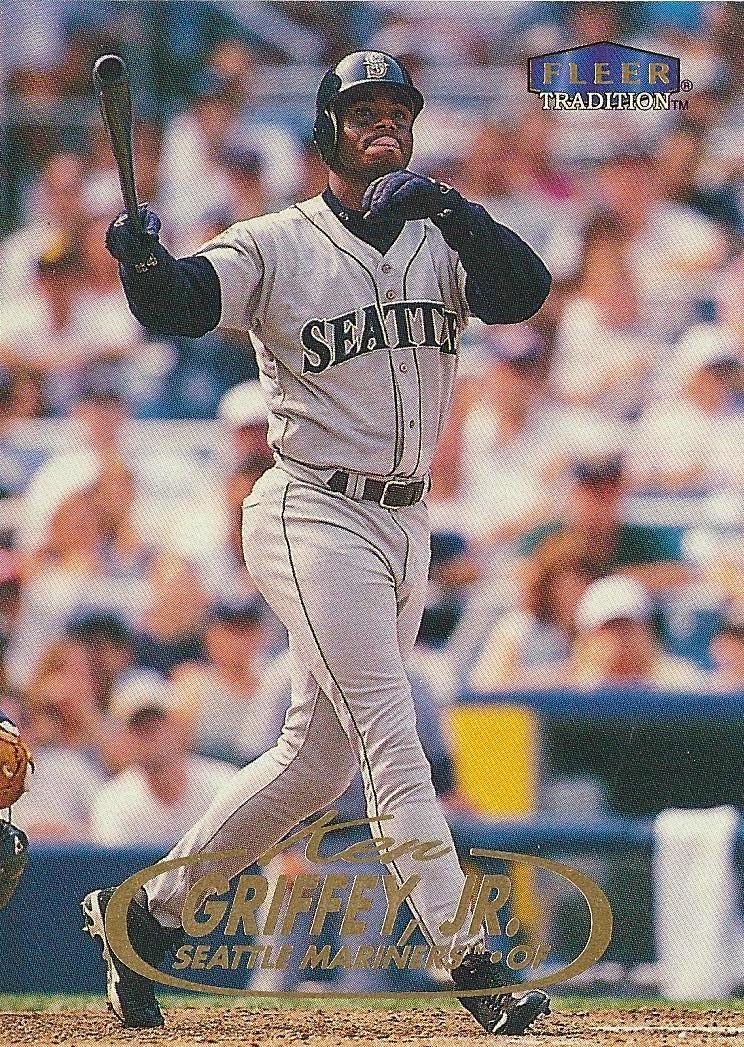 Is this a good Griffey?  Yes.  A great inaugural set that gave the newest AL MVP card number 1 in the checklist.

The set: I must admit that at first glance I never thought much about this set.  To me it was just another run-of-the-mill offering with a bland nameplate.  Now that I've spent a little time with it, I can admit that I was wr-, wr-, wr-. I was wr… wrrrr…I was mistaken (Fonzie!).

One important aspect of ’98 Tradition is that this was Fleer’s defacto flagship base set.  There was no 1998 Fleer - Tradition and Tradition Update were it.  Everything else was sub-branded under names like Flair Showcase, Metal Universe, and Sports Illustrated.  They had to make this one count for their namesake, and the result was a pretty solid set of cards.

No, I’m still not crazy about that nameplate design and never will be, but it is conducive to some sweet full-bleed photography.  Similar to some of my favorite Stadium Club designs, the name plate stays the hell out of the way and lets the photography do the talking.  The greatness of the design here is the almost complete lack of design.  It’s very Zen, really.

The card backs are a different story.  A full-bleed jersey background, large portrait, and colorful stat box make for a very busy but not unattractive back.  I really appreciate that they know the plural for RBI is RBI and not RBIs (I am fond of “ribbies,” though).  They also squeezed some fielding stats in there which is a rare feat.

Now as a Junior Junkie, I would be remiss not to mention that Griffey got a whopping six cards in the base set: a base card, two checklists and three subsets.  With the seven inserts that makes 13 possible Griffey pulls from a pack of ’98 Tradition – swoon-worthy numbers for an old junkie like me.  Those subsets and inserts are the polar opposite of the base design, very busy and often over-designed, but there are just so many of them!  Squeeee!

Let’s start with the Griffeys of the base checklist: 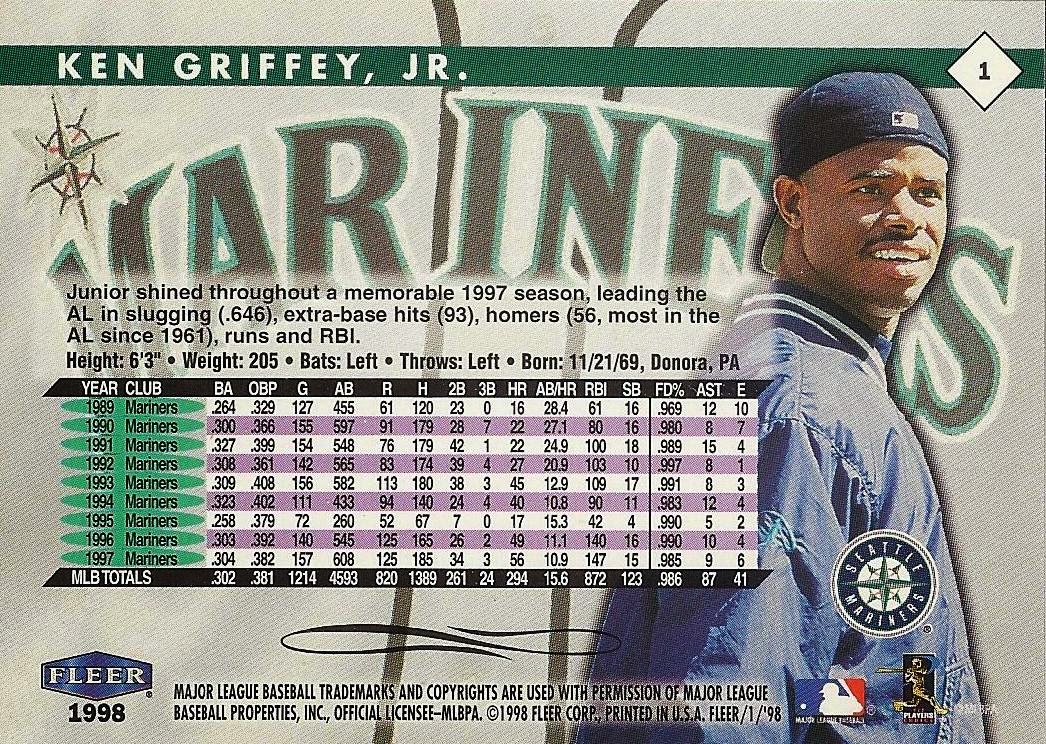 I think this picture must have been taken on an overcast day, but there’s nothing shady about this victorious hero shot.  Junior appears to be watching one sail over the right field wall in his classic Seattle grays.  I like the wall of spectators behind him.  The white hat/shirt guy in the front row is huge. 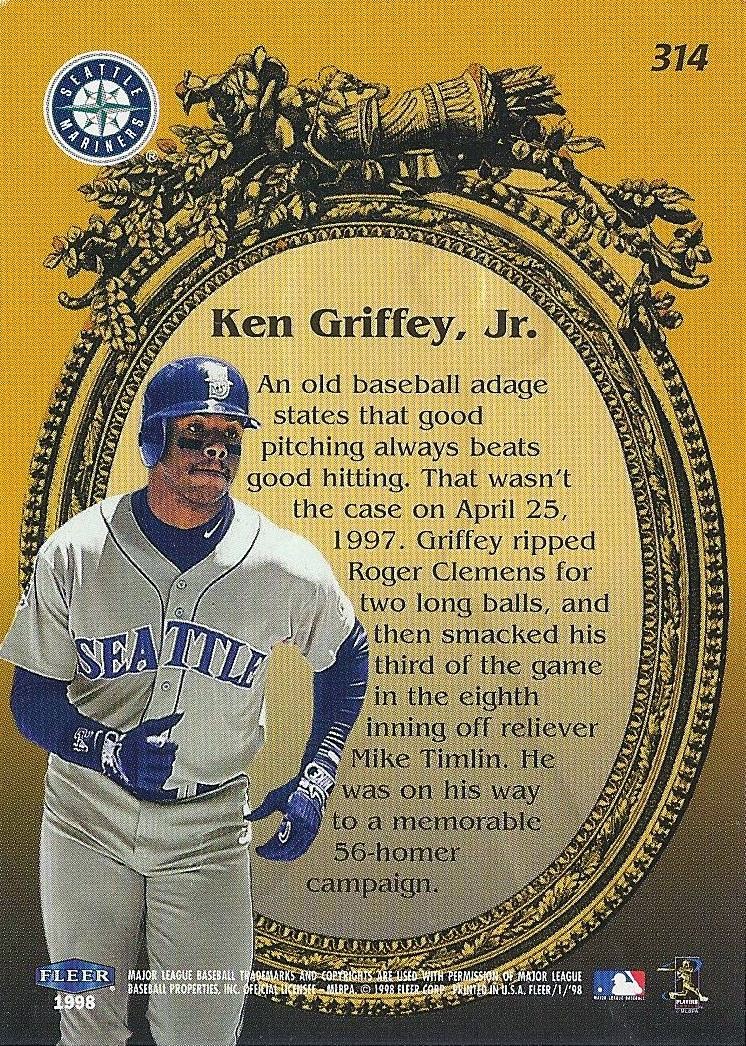 It took me writing this post to realize that the thingy behind junior is a “G” as in “golden.”  Duh.  It’s a pretty nice design - I’m a sucker for gratuitous filigree and light embossing.  The memory they used for the blurb is a great one, too.  Nice card – maybe a little too nice for a subset. 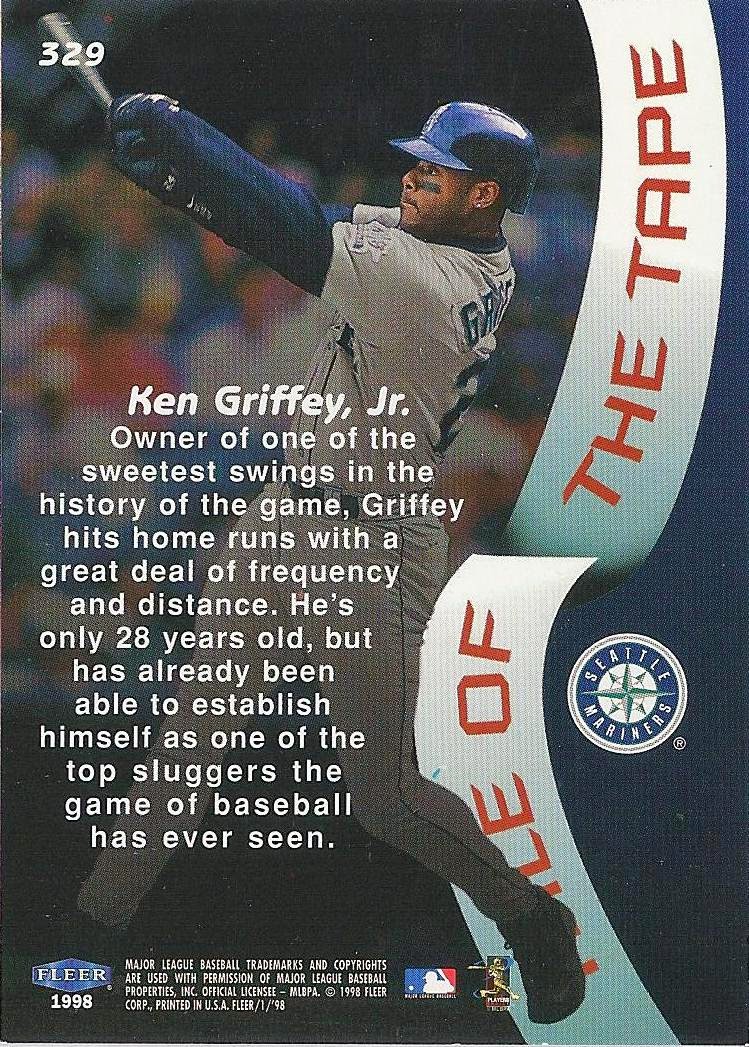 This is a novel idea for a base set with a clever vertical nameplate.  The vertical banner “tape” is fun and sparkly, but unlike that of the previous subset the blurb here seems clunky and thrown-together.  I still really like this card. 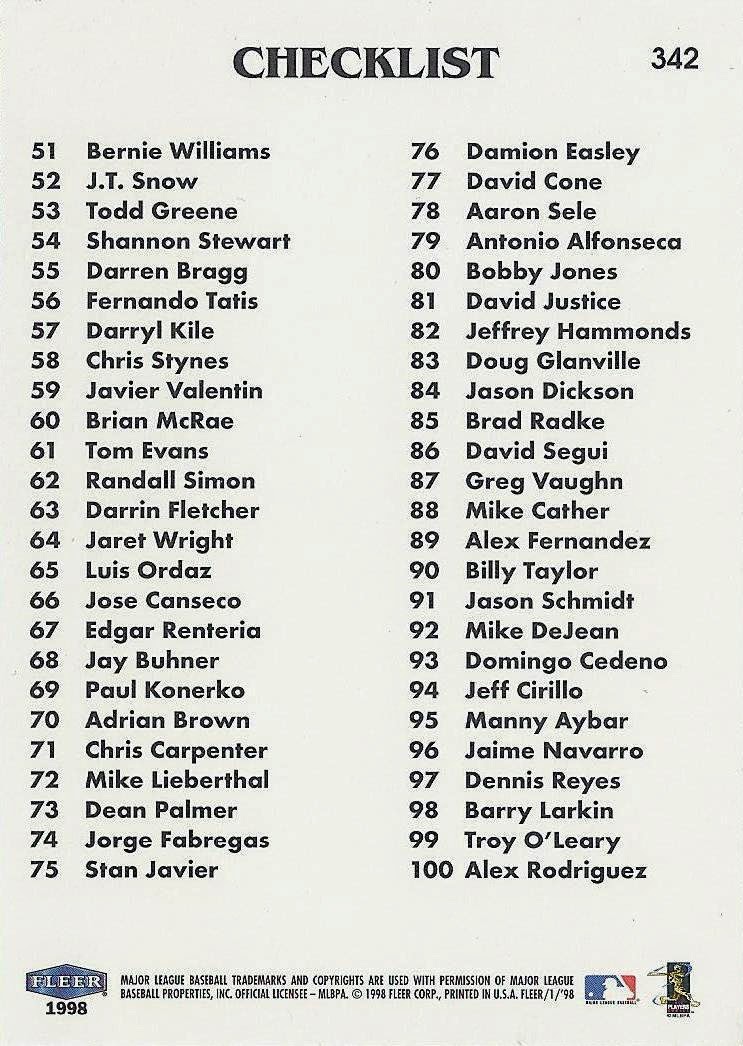 There can never be enough floating bat Griffeys.  In addition to that you also get the gritty behind-the-scenes-at-batting-practice vibe as well as the signature backwards cap.  What a perfect shot for a checklist card. 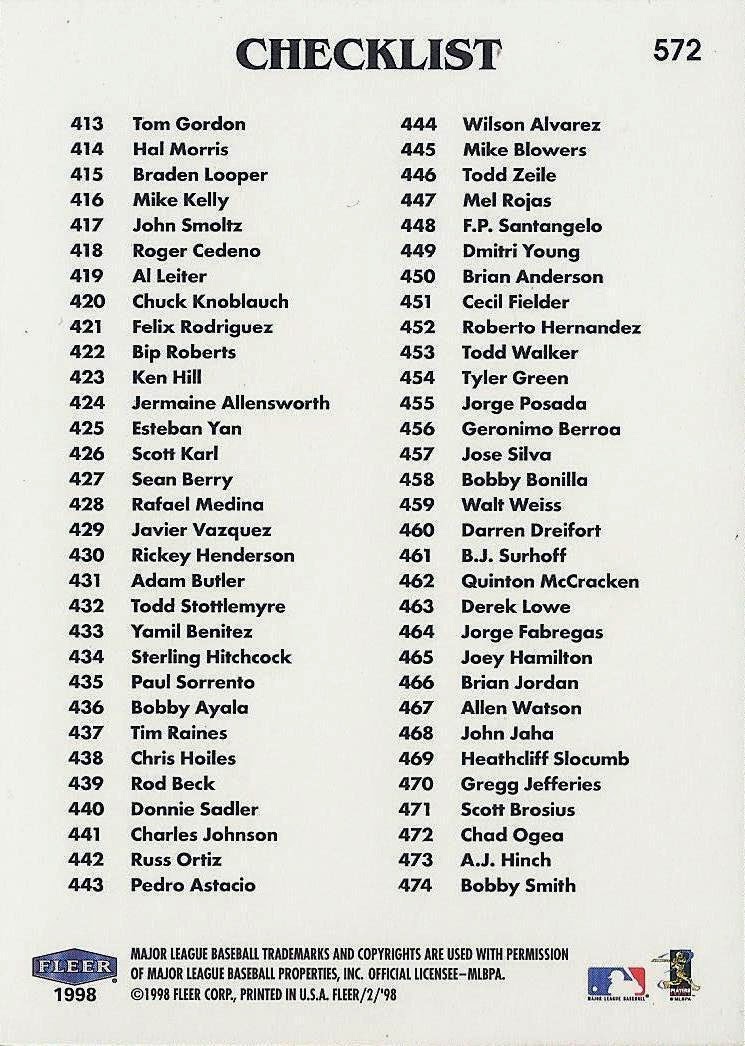 Here’s a nice candid pic of Junior on game day.  If he’s anything like me he’s picking dandelions in right field.  Luckily he’s not like me and is more likely robbing homeruns on his invisible horse in center field. 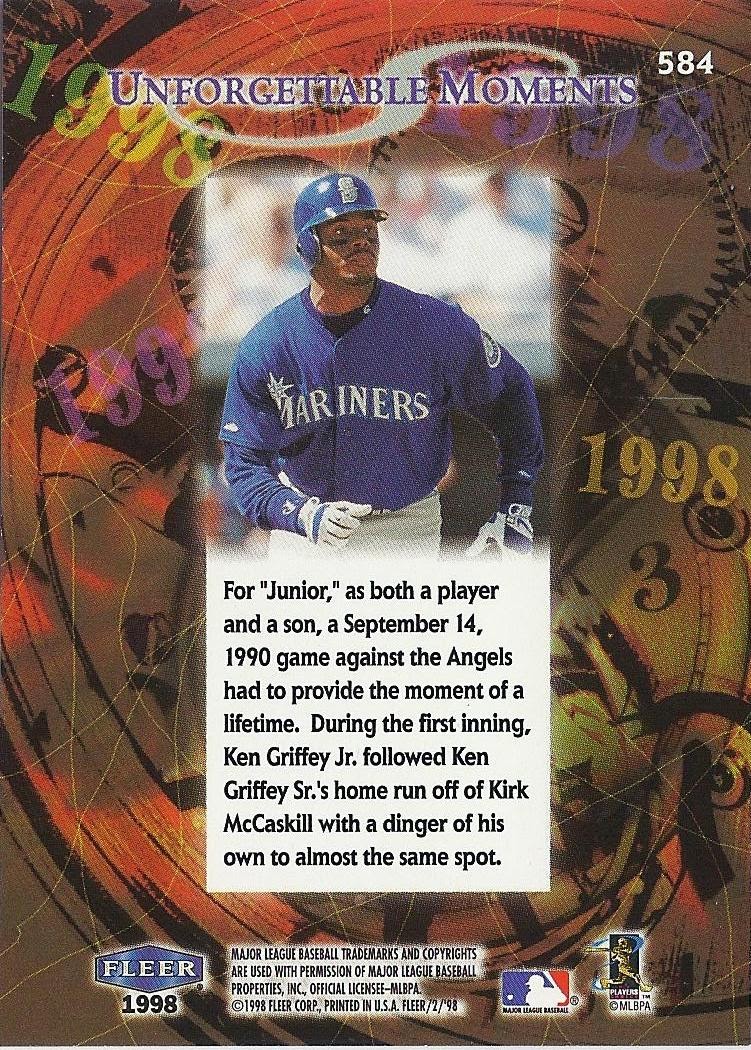 The background of this card is busy to a fault.  I think they were going for a collage effect, but it just doesn’t translate well to a medium of this size.  The blurb on the back talks about Ken and his Dad’s back-to-back homeruns in 1990, but the picture on the front is obviously late-90’s and the year 1998 is on there four times even though the event referenced is from 1990.  I feel like this card cheapens the very moment it is half-assedly attempting to celebrate. Boo.

Also, I’m starting to think that cards that reference Junior and Senior’s back-to-back home runs deserve their own post.  There have to be dozens now.  That’s not a complaint.

Let’s move on to the inserts: 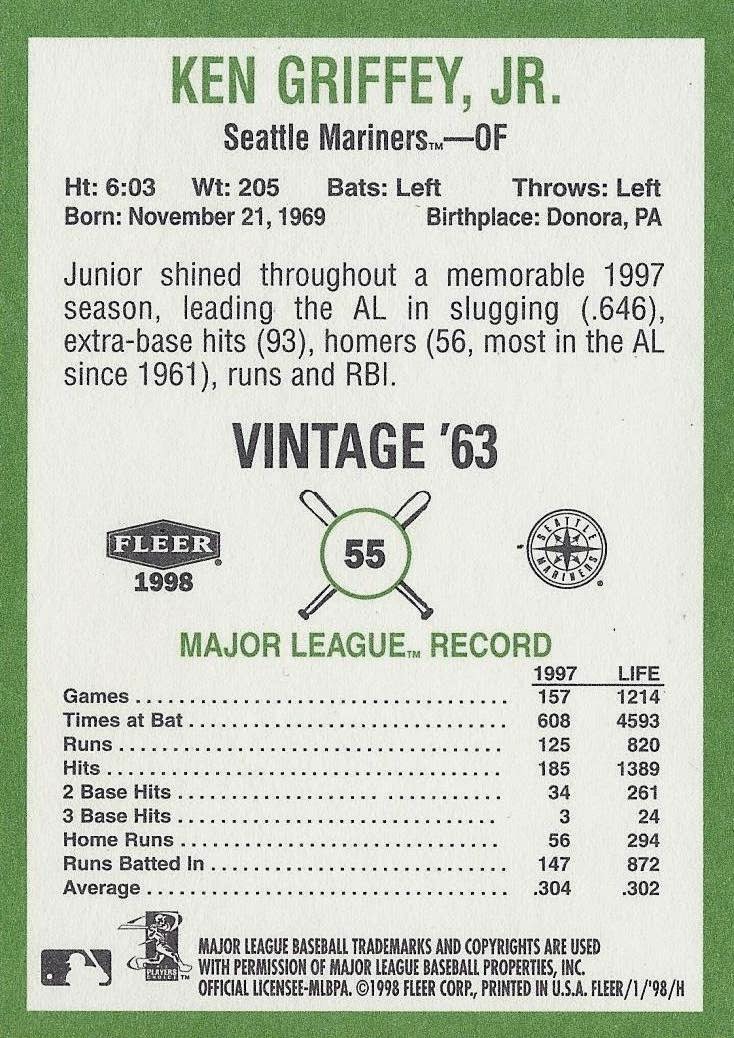 The Vintage ’63 cards were a cross-brand insert you could pull from multiple different Fleer sub-brands.  It’s also the most traditional thing about Fleer in 1998 and in my opinion also one of the best ideas they had in the late 90’s.  While most of their late-90’s/early-00’s sets are all shiny and modern, that old ’63 design is a valuable commodity that bears showing off.  Neat card.

One really cool aspect of this insert that they carried over from the original 1963 Fleer set is that they removed the little cartoon player from the yellow diamond and replaced it with the AL MVP verbiage.  They did this same thing for the AL MVP of 1962 – some dude named Mickey Mantle.  Hey, they can’t all be household names.  I would like to see this card with a little cartoon batter (and will in a later Tradition base set), but the AL MVP designation is a whole lot sweeter. 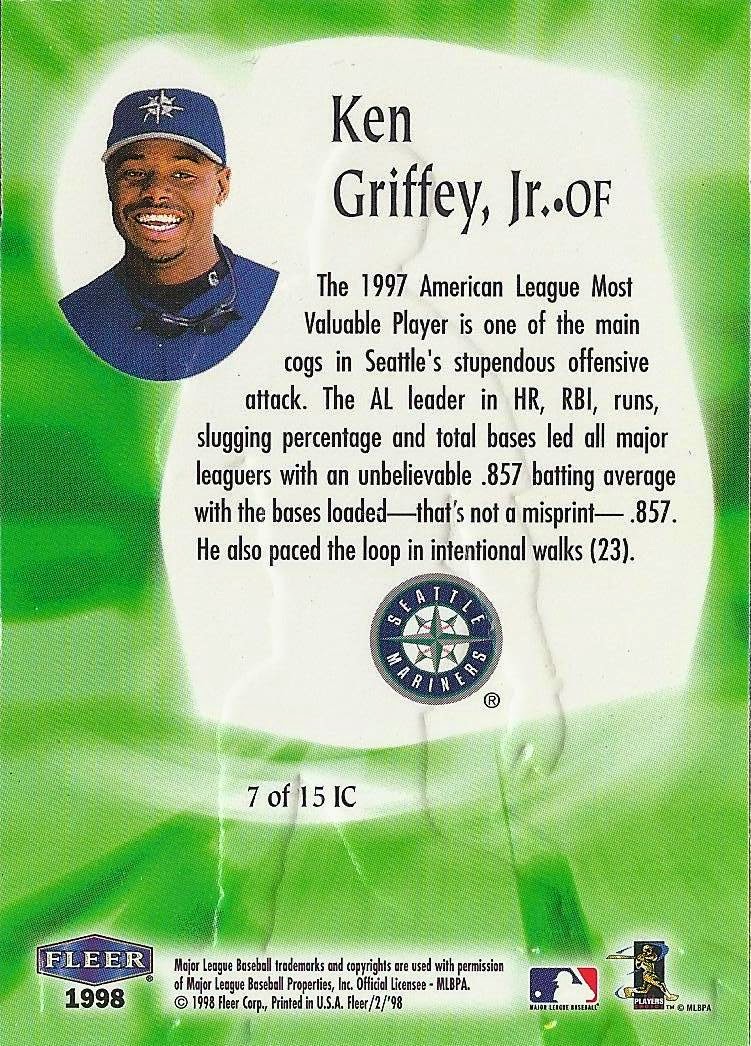 I like big squares of shiny emerald holofoil as much as the next guy, but the back of this card is the real star.  .857 with the bases loaded?  That must be a misprint.  Wait, no, I read a little further and I have assurances that it is not - unless, of course, that’s actually two misprints.  How great is that blurb, guys?  I especially like the part about how Junior “paced the loop” in intentional walks.  I’ve never heard it put that way – “pacing the loop.”  Is that anything like gleaming the cube?  So clutch. 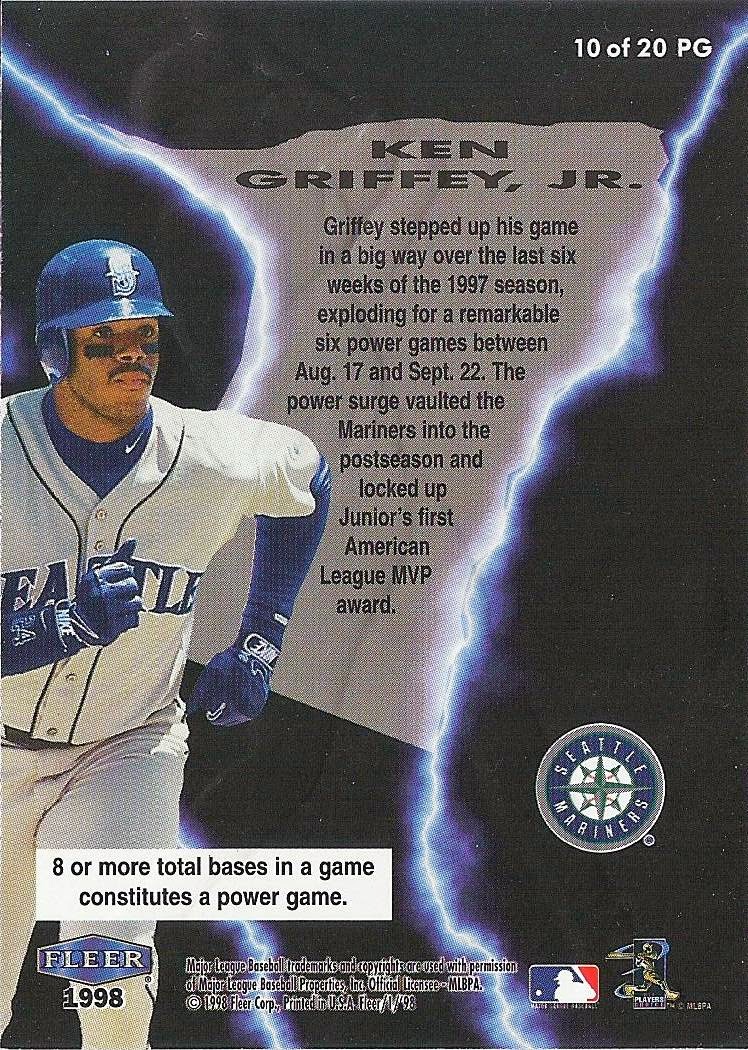 Please bear with me through this next part because it’s kind of long, but I need the input of those more baseball-savvy than myself.

I thought that “The Power Game” was just a cute name for an insert until I read the blurb and learned that Griffey had six of these so-called “power games” in just over a month.  Exactly six.

I immediately questioned this claim.  It’s such a generic-sounding term with a distinct air of subjectivity.  A “power game.”  If Griffey hit three home runs in a game people might say “He had a real power game,” and it would make sense, right?  I certainly wouldn’t question it and would respond with a sturdy high-five.  The guy demonstrated power by hitting the crap out of the baseball often.  What if he had one home run and two doubles?  Sure, that may be a power game, depending on your personal standards.  If someone asked me how many power games Griffey had, I imagine the conversation would go something like this:

Person: “Pardon me, sir, but how many power games would you say Griffey had between August 17th and September 22nd of 2007?”

On the other hand:

Person (to Fleer): “Pardon me….brand of sports cards, but how many power games would you say Griffey had between August 17th and September 22nd of 2007?”

I would insist that most games Griffey played in during that time were power games by some measure.  But not Fleer.  Six.  He had six.  So then I thought maybe I am an idiot for not knowing what is obviously a widely-recognized and quantified baseball term with a hard-and-fast definition that leaves no room for argument.  I was about to let it go when I saw this:

Had Fleer not included this little white box at the bottom of the card I never would have questioned the validity of whatever it is they insisted a “power game” was; but they did, so I did.  I mean, there it is in black and white: eight or more total bases in a game constitute a Power Game.

I tried to find this term elsewhere in the world - anywhere other than on this card would do.  I turned to Google, Wikipedia, even Bing - EVEN BING - no results resembling Fleer’s definition.  There’s no big light-up sign in any ballpark or on any scoreboard in America that indicates a player’s Power Game total base countdown.  No crowds wait with bated breath for a player with seven total bases to eke out that magical eighth base and get the Power Game at which point they all go nuts for a minute as that non-existent Power Game sign goes ape-shit and the player waves his cap.  None of this is real stuff.

So long story short, I think Fleer made it up.  Bowling has the Turkey; Golf has the Birdie, Eagle, and Albatross; and Hockey has the Hat Trick – I think Fleer wanted to be responsible for a unique baseball term.

Somebody please comment below and tell me you’ve heard of a “power game.”  I want to be wrong.  I don’t want to live in a world where people can just make up terms for things that have never had any one word ascribed to them and throw them at you like it’s no big deal.

“What did you do this weekend, Phil?”

“Sharon and I took the kids foozling.”

(foozling – v. the act of slinging five or more carrots via elastic underpants waistband at a blindfolded monkey for sport)

Anyhoo, I love the use of green and purple here as well as the raised printing used for the lettering and player photo, but it still come across a little plain.  This may have been more appropriate for a subset.

Here are the Griffeys of 1998 Fleer Tradition that I do not yet have in the collection:

This, the inaugural year of Fleer Tradition, remains popular among collectors to this day.  Not many sets from this era can claim such timelessness.  While I prefer the Tradition base designs of two years later when they started getting all vintagey, the success of this particular set speaks volumes for good photography and filling your checklist with Griffeys.

Did I take that Power Game thing too far? I think I might have taken that too far.
Posted by The Junior Junkie at 11:23 PM