Sometime in 1997 someone at Fleer decided it was time to abandon the notion of a regular “Fleer” base set.  The following year they would launch their new flagship set which they called Tradition thus allowing their timeline of eponymous flagship sets, unbroken since 1981, to fall by the wayside.  Tradition then remained Fleer's flagship until they were bought by Upper Deck in 2005 and given the old heave-ho a year later.

Here is where I’m conflicted.  I like the idea of a brand called Tradition, but for those first two years the design was hardly tradition-al.  It was modern and glossy and befoiled - they even had a big, shiny vertical nameplate in the second year.  Then from 2000 through the brand’s ultimate demise in ’06 (under Upper Deck) the designs were all perfectly traditional.  It seems to me that ’98 and ’99 Tradition should have been the flagship designs, and this timeline should begin at 2000.  Instead we have those two years where the brand name is mismatched with the aesthetic.

All that aside, Tradition is a solid Timeline with some great vintage appeal right down to the last set.  It's also one of those brands whose entire timeline came and went during Griffey's career.

Here is every Fleer Tradition base card design in order: 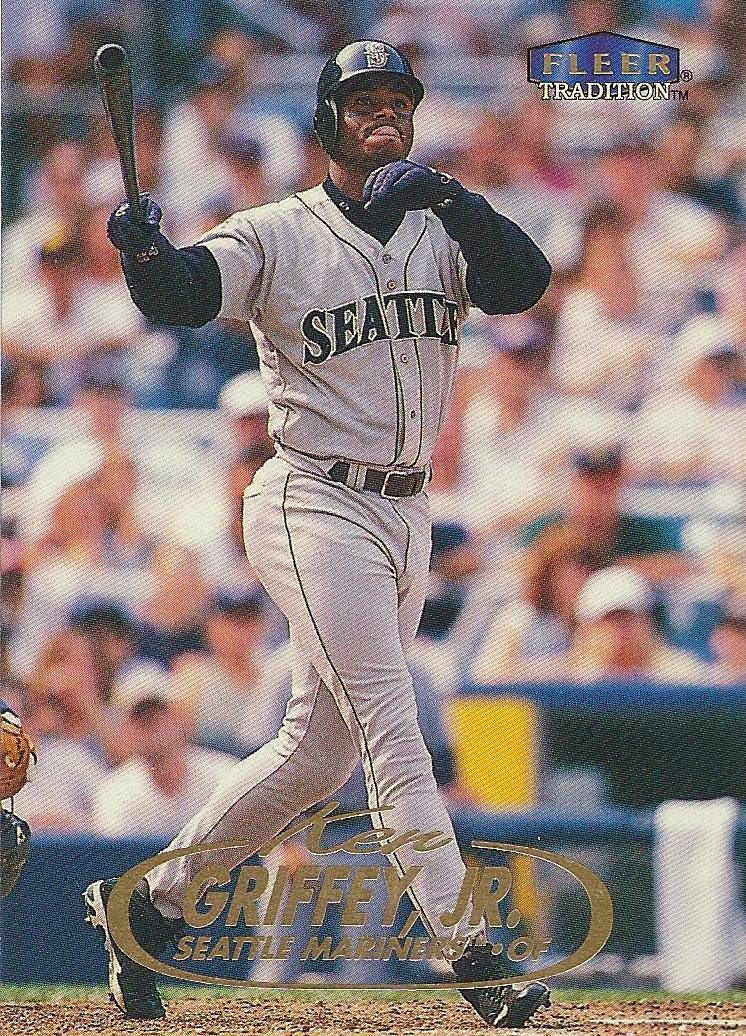 A very popular set among collectors to this day, the design here is one of noninterference with the photography which happened to be excellent that year.  The nameplate is simple, and to be perfectly honest I’m not crazy about it, but the cards in this set are just so good that they endear us to that weird oval design. 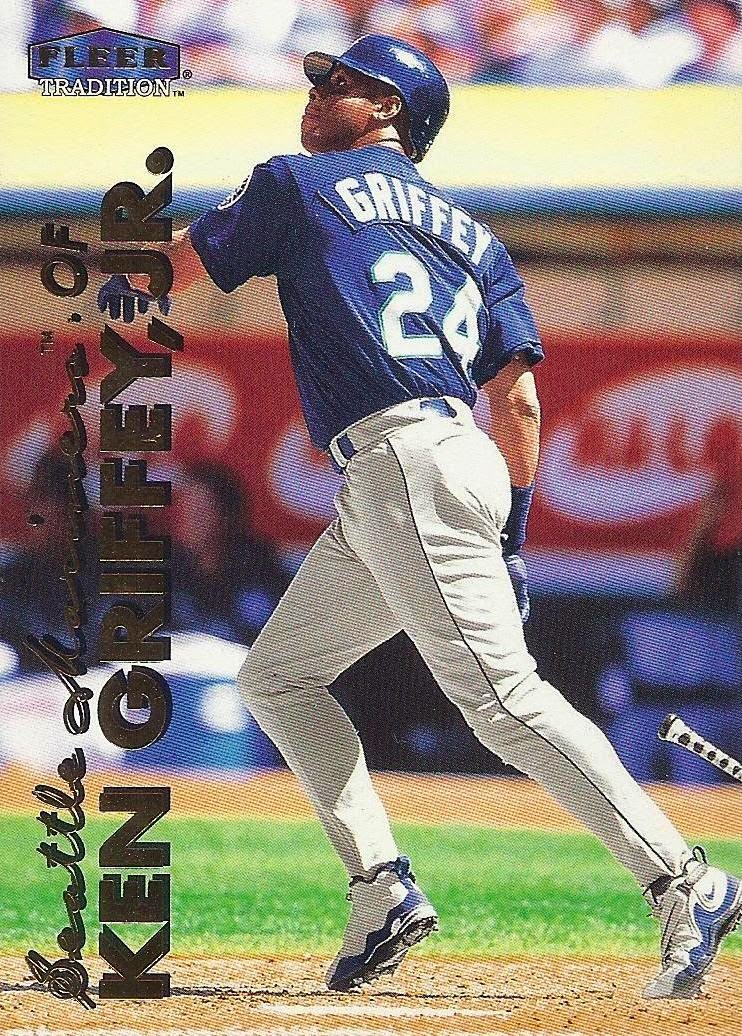 Another full-bleed offering that relies heavily on the photography.  The nameplate, while huge and vertical, doesn't hurt the photography too much.  The strangest aspect here is the mixture of fonts - we get what looks like handwritten script beside large, blocky capital letters.  This one’s always looked like a Pacific card to me.

At this point in the timeline someone at Fleer wised up and got the Tradition brand where it needed to be design-wise.  To me, this is where the timeline really starts. 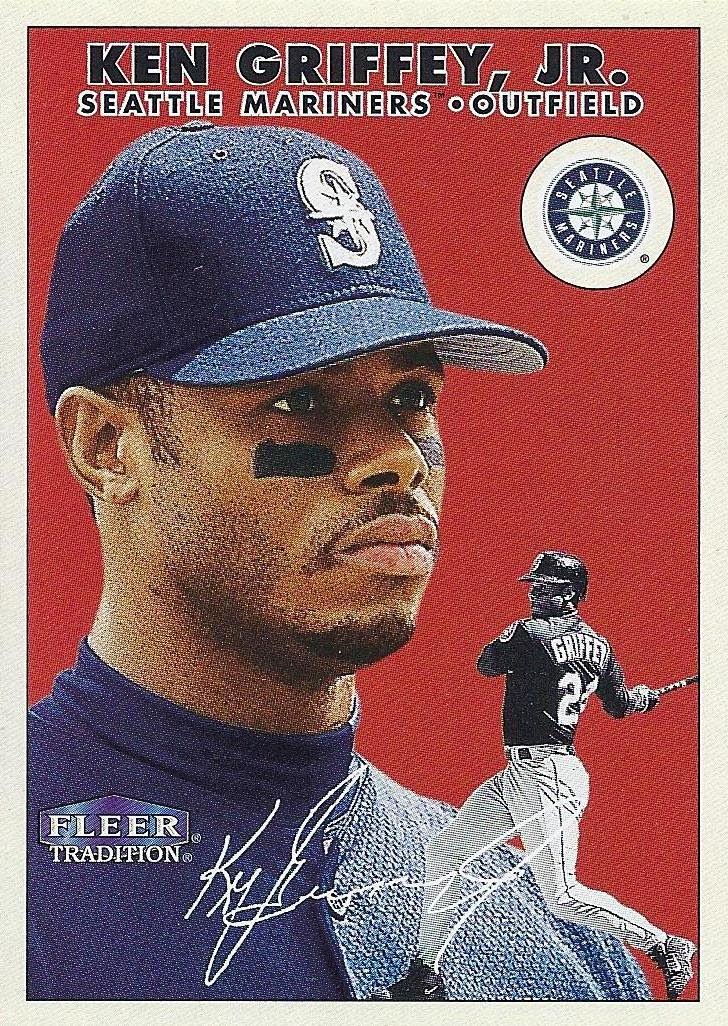 The millennium brought with it a shift in the card industry towards classic designs.  At first Fleer took vintage cues from Topps as did most other brands.  It wasn’t until later that we started to see new cardboard in classic Fleer designs.  This one clearly emulates Topps’ 1954 design with the large close-up photo against a field of solid color, the small monochromatic inset picture, and the facsimile signature.  In the original design the color field bleeds over the white border on the top edge. Part of me wished Fleer had kept that fun detail in there. 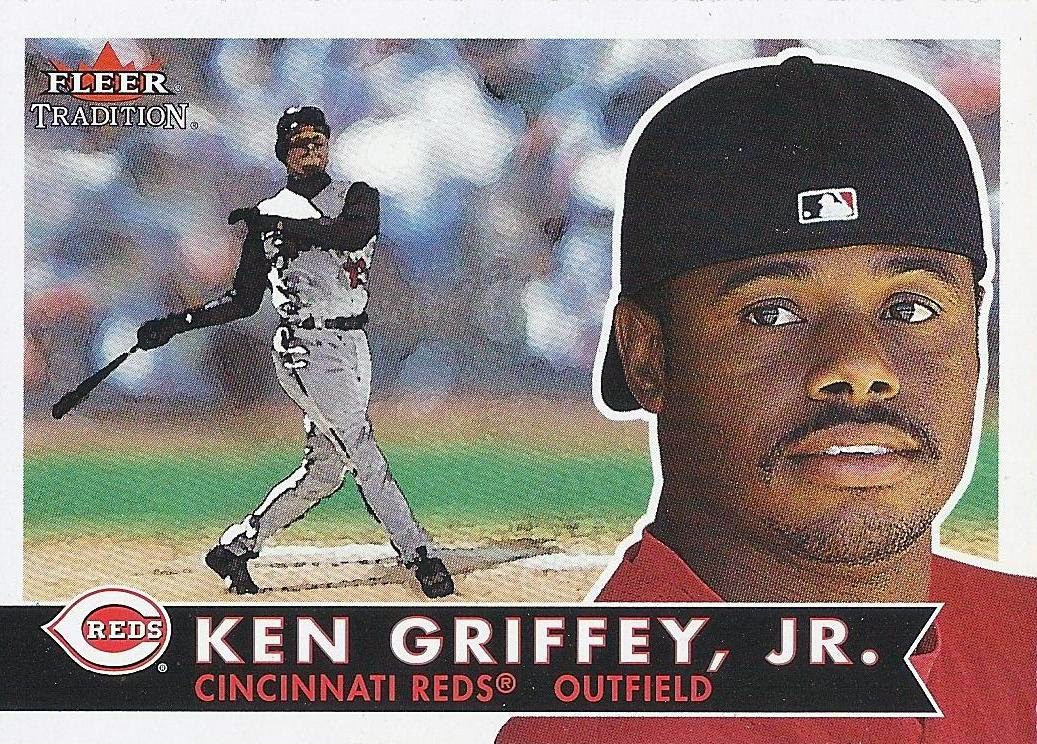 Of the three vintage horizontal Topps sets, this card is closest to the 1960 design in that we get a large portrait against an action shot with a full-color background.  Speaking of the background, take a good look: it's like a French impressionist painting.  Tres bien.

Fleer stylized the nameplate and moved it to the bottom.  They also added a team logo and were liberal with the superimposition over the border which I really like.  A little more color would have helped this particular card, but it seems Fleer only went with each team’s darker color for the nameplate throughout the set.  I would like to have seen that part in red. 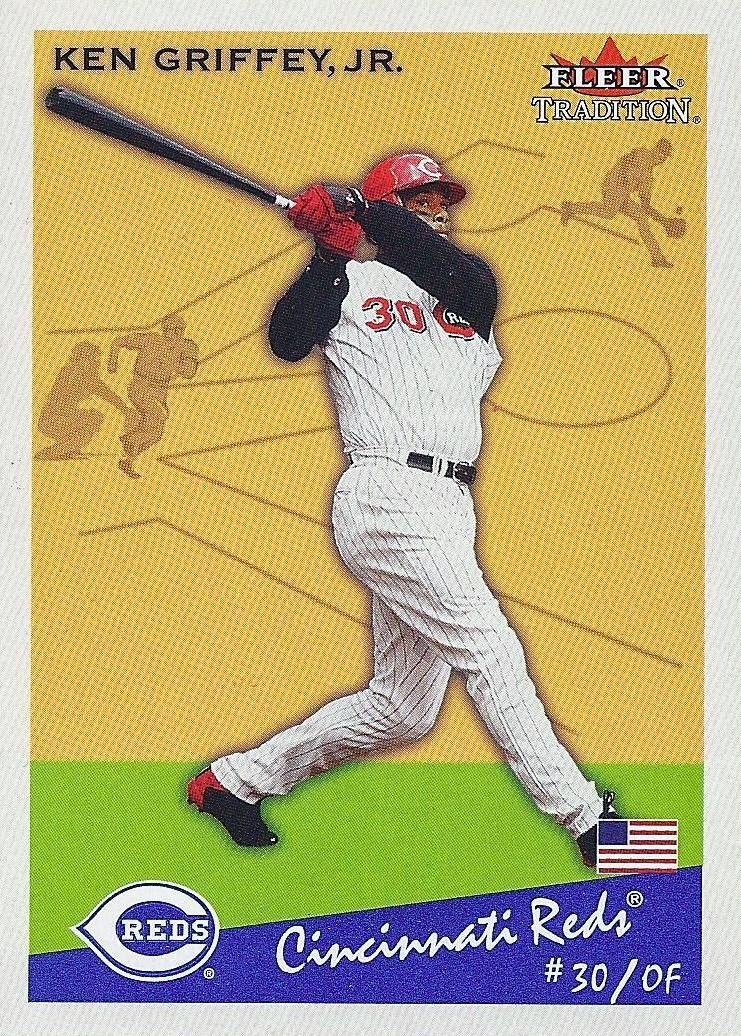 This set is based on one of the coolest, most colorful vintage designs ever made: 1934 Goudey - the Lou Gehrig Says set.  I love that they kept the silhouetted infield action shot in the background.  The inclusion of an American flag is no surprise as everything made in 2002 had an American flag on it somewhere.

This design was also used for the Goudey Greats insert in 2006 Fleer Tradition (during the UD years) in the original square configuration with Ken Griffey, Jr. taking Gehrig’s spot as the guy who says stuff.  Isn’t that nice? 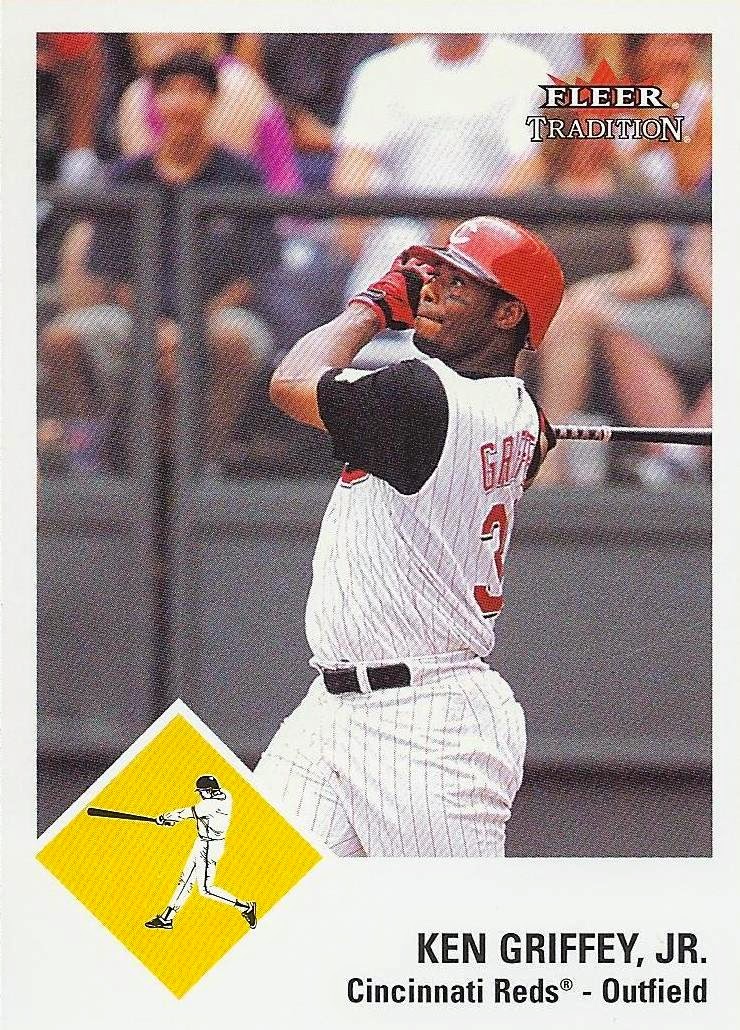 This is the second rehashing of the classic 1963 Fleer design.  The first was in 1998 when it appeared as a cross-branded insert.  This year we finally got a '63-style Griffey with the little baseball man in the yellow diamond (he got the AL MVP verbiage in the '98 insert instead).  While the '03 design is a lot plainer than previous ones and the picture could have been cropped a little better, this is as authentic as Tradition would get. 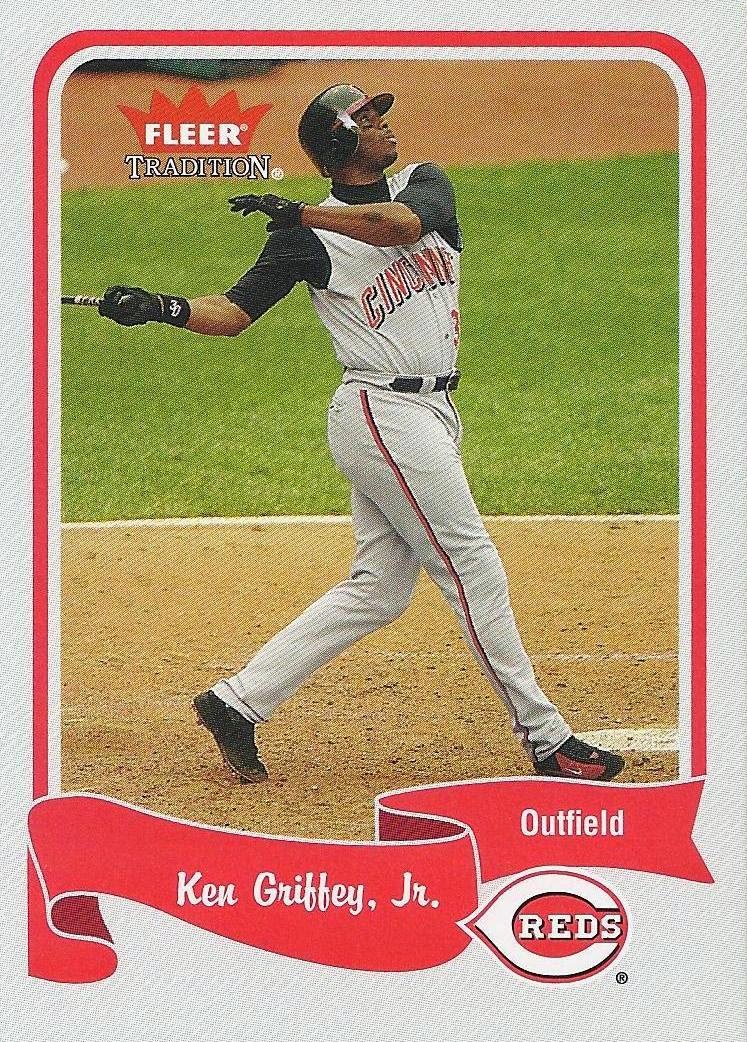 This set reminds me of Fleer’s 1990 flagship set with the monochromatic banner and thick white border.  I can live with a tribute to '90 Fleer, but I do have one major gripe with the design here: the player name doesn’t follow the curve of the banner.  WTF?  Seems a little thrown-together.  The font is also hella-lame.  A few small tweaks and this set would at least have gotten to likeable. 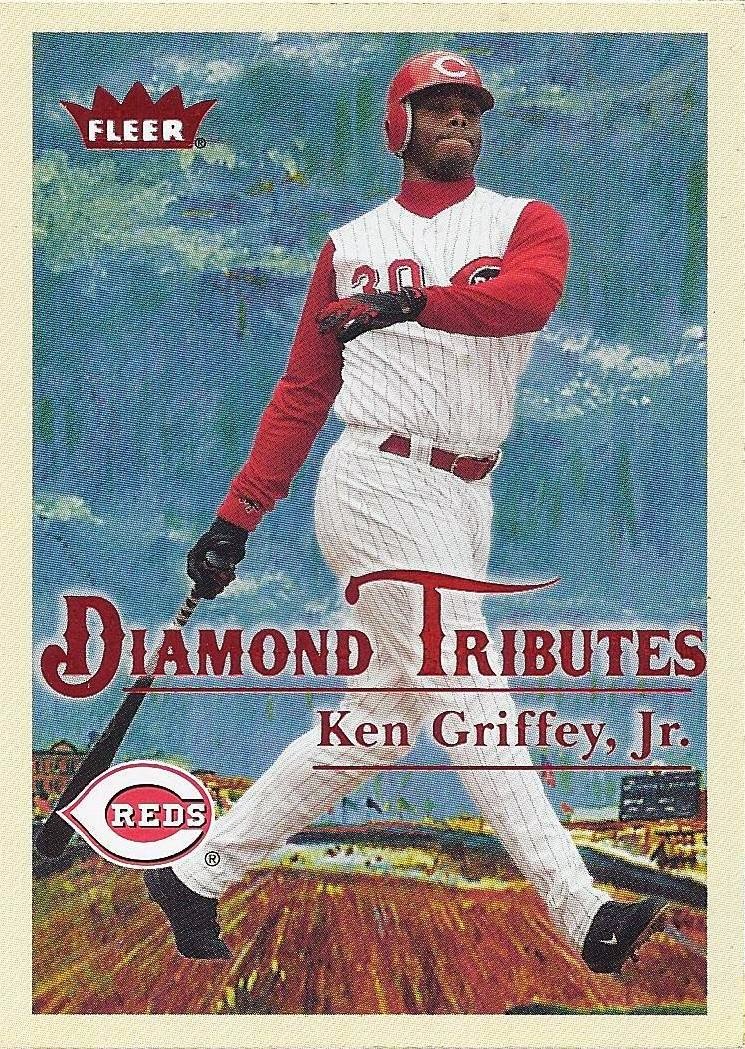 2005 was a very bad year for Fleer.  They went out of business sometime after the release of Series 1 of Tradition but before the release of Series 2.  Only a handful of promo cards from that series made it out into circulation, and the Griffey was not one of them.  It’s a shame, too, because the card backs from this base set are gorgeous.

The card shown above is the only Griffey to come out of ’05 Fleer Tradition, an insert called “Diamond Tributes.”  The actual base set resembles 1941 Play Ball, but I’m not positive that’s the inspiration.  Oh, well - enjoy the placeholder. 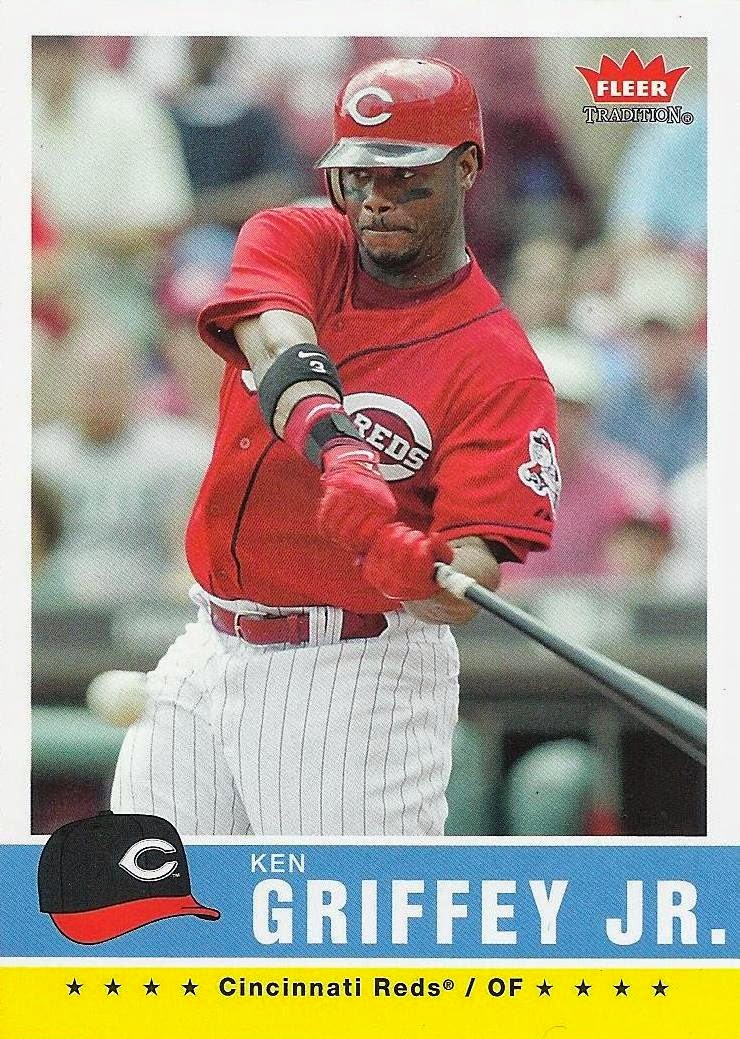 This is the Upper Deck's first and last Tradition design.  Despite having dropped the ball so completely in the production of the regular Fleer set this same year, Upper Deck did a really solid job on Tradition.  The design is fresh and colorful while still keeping to the vintage look.  The great hat logo on the nameplate is one of my favorite elements in this entire timeline.  Amazing that they co-opted so many Topps designs in the making of their own vintage sets but came up with something so exciting and original when creating one from scratch.

The non-Tradition Fleer brand continued another year under Upper Deck, but I would rather have seen them take one more crack at Tradition.


The Tradition timeline had a lot of bright spots, especially after Fleer realized where to take this thing.  On the other hand, it never really felt like a flagship set after 2000.  So is it one?  It seems like Tradition exists in a strange limbo, a sea of sub-brands Fleer flooded the market with after the demise of Pinnacle and Donruss.  I remain conflicted about giving it the flagship designation.  I am unconflicted, however, about saying it was traditionally a damn fine set of baseball cards. 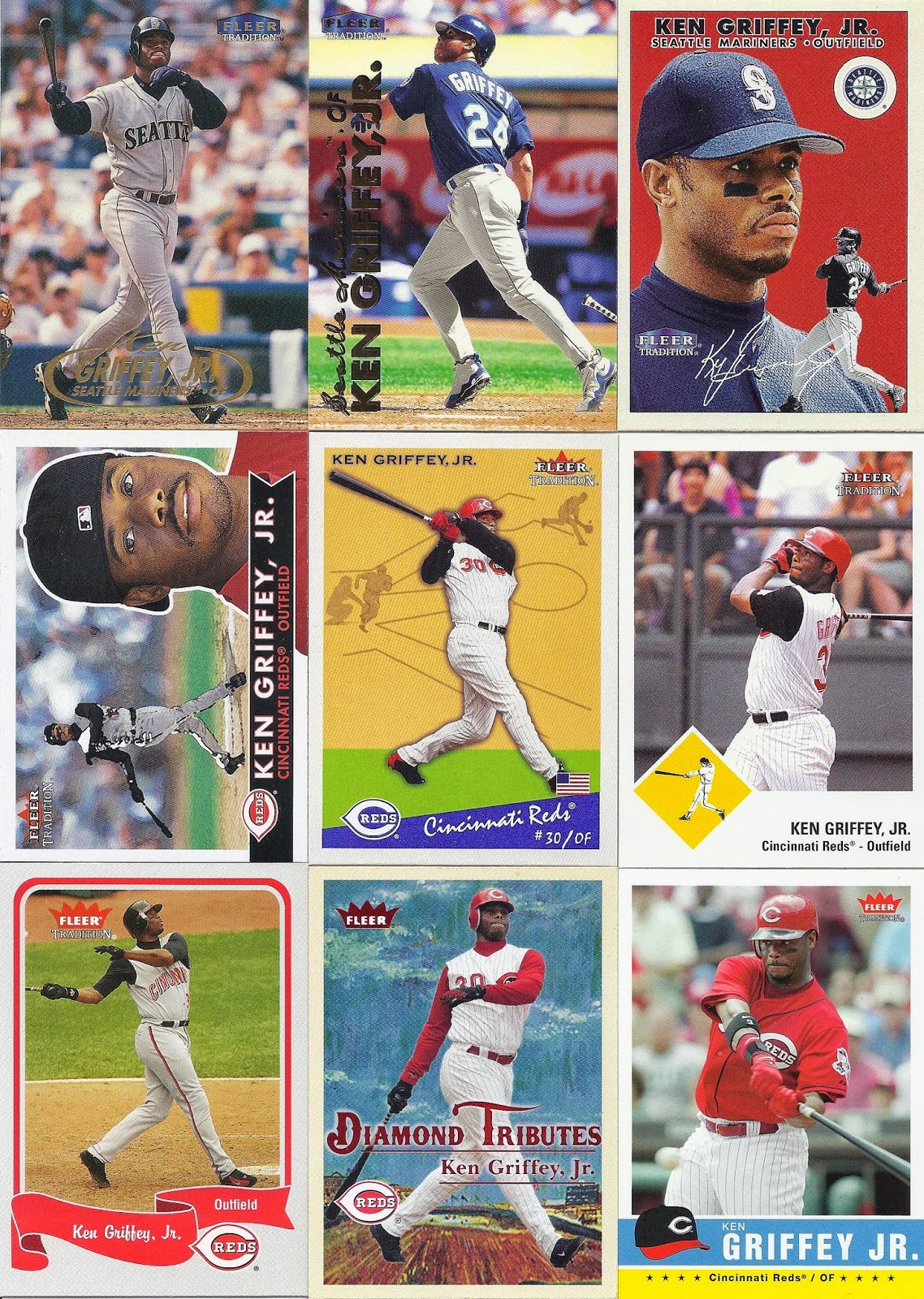