Some sets are just really easy to do a write-up on because I love them. Have for years. This is one of those.

There was a rebirth of sorts in the mid-90’s at that perfect moment when competition was its fiercest and the cost of high-end printing methods finally caught up with the price a company could reasonably charge for a pack. Across the spectrum of brands and sub-brands, suddenly cards started getting uncharacteristically fancy, all decked out in foil, cursive, and levels of gaudiness that would make Liberace blush. Long-time collectors with a more vintage bent spurned the change, but it was a hit with the next generation of starry-eyed young card noobs. That’s when I first came into the hobby.

Enter ’93 Leaf with one of the most dramatic design overhauls ever witnessed.


How does one compare these? How do you measure the change? Answer: you can’t. It would be like trying to compare a typewriter with a Macbook Air. There is no comparison. While related, they are also wildly unrelated.

Let’s start with the base cards: they’re shiny – real shiny. Full-bleed and Leaf’s first year of full-gloss, every card in this set received a big-ass gold medallion complete with blue ribbon and lovely team-colored marble texture along the bottom. The slant-tastic strip of name is decked out in even more shiny gold foil offset by a thick band of black. The entire affair has the air of a Major General’s military decoration.


We should talk about that new seal, too. You know, the gigantic gold one you can’t possibly miss. It has three words on it: “The Leaf Set.” Not “Leaf,” but THE. LEAF. SET. For many of us who were born in the 80’s, this was our first introduction into perception marketing. Prestige perceived is prestige achieved. You can imagine the conversations that went on in early 1993 between collectors:

“Are you going to collect Donruss this year?”

“What about THE LEAF SET?”

“Please. Is the Pentium the best microprocessor on the market? Of course. It doesn't get much better than THE LEAF SET. I just hope I can afford it. Have you seen the giant gold medallions on those things? Classy stuff.”

“I totally flip through ’93 Leaf with my pinky up.”

Griffey does not feature as prominently in Leaf as in some other brands. It probably has something to do with the fact that Frank Thomas was the face of the Leaf brand in the same way that Griffey was with Upper Deck. I remember a perceived rivalry between Junior and Thomas for the simple fact that their cards were always right about the same value, and they were frequently referenced in the same breath in Beckett and on Baseball Tonight.

Anyway, Junior got a base card and shared two cards with two other players in the dual-sided Gold Leaf All-Star insert for a total of three cards. Frank made it into one more insert than Griffey (On the Fast Track) and also received his own private 10-card insert for a total of fourteen cards. That's not including the super-limited autograph cards.


Each of the ten cards in the Frank Thomas insert features a large holofoil “Frank” paired with a word describing him. The backs are even cooler with a portrait of the Big Hurt framed in an aerial shot of the Chicago skyline. This is in character as ’93 Leaf has a lot of great card backs.


This is also the first year of Leaf’s Heading for the Hall insert, the 1995 version of which is one of my favorite inserts of all time.

Let’s look at the Griffeys: 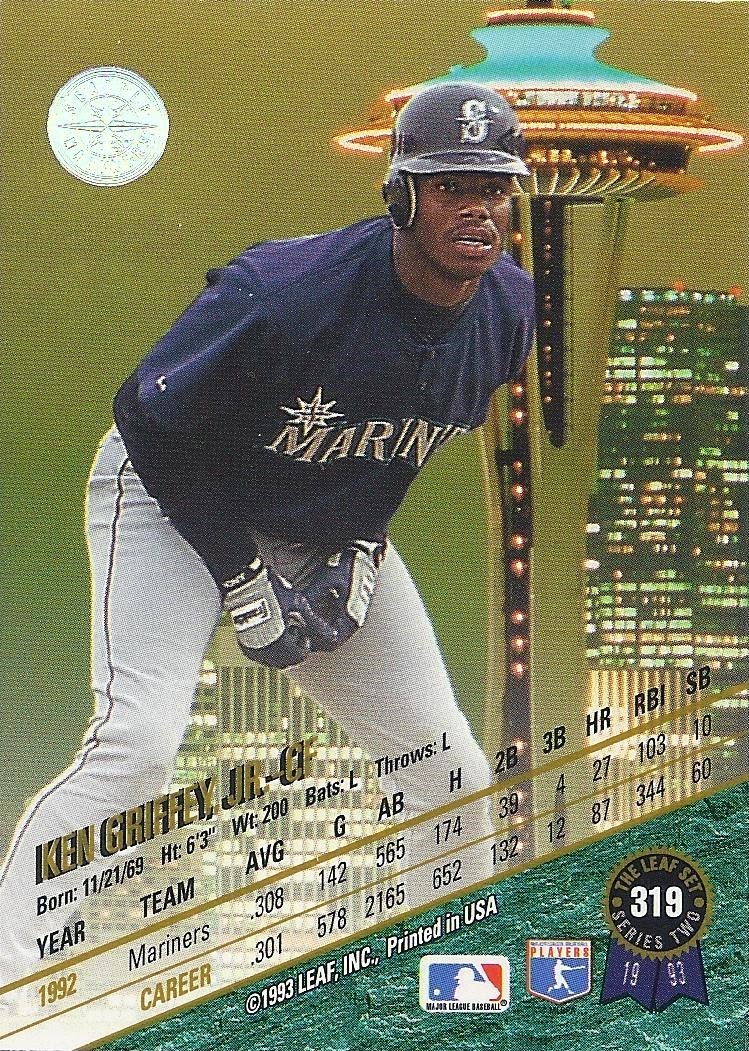 The action on Junior’s base card is kind of weird. It looks like he just gave that swing a whole lot of follow-through, but he doesn't seem to be in a hurry to start running. You could say it was a guaranteed home run and he was enjoying the aftermath, but he isn't looking as high up as I would expect this soon after the swing. Griffey’s swing did not produce a whole lot of line-drive homers. He was more about the optimal-angle ball launch. I guess what I’m saying is that I think this is a single at best.

On the flip side ’93 Leaf has some of the best base card backs in history. It’s not just my own emotional connection to the Space Needle (my wife and I ate at the rotating restaurant there the night we got engaged). It’s the perfect carryover in design from front to back, the stats oriented with the marble slant, the holofoil team logo hanging in the sky like a supermoon above the cityscape, and Junior looming larger-than-life above the whole thing. I can’t think of a better card back off the top of my head. I’m not saying there aren't any, but there certainly aren't many. 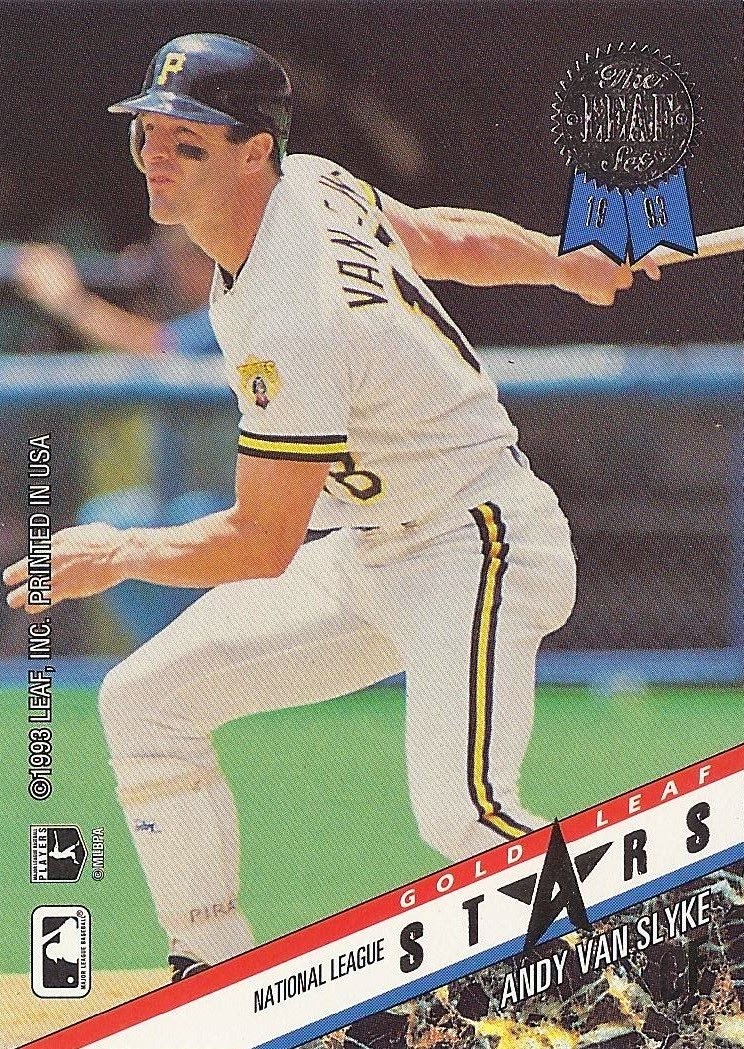 The Gold Leaf Stars insert features two players, one per side, a great insert logo, and little else. It’s a fun red, white, and blue spin on the signature ’93 Leaf slant layout, but there’s not much to this insert apart from the photos. I like this shot of Junior about to make a save at the wall, but I suspect it’s staged. This was not the only time Junior would appear on a card opposite Andy Van Slyke. 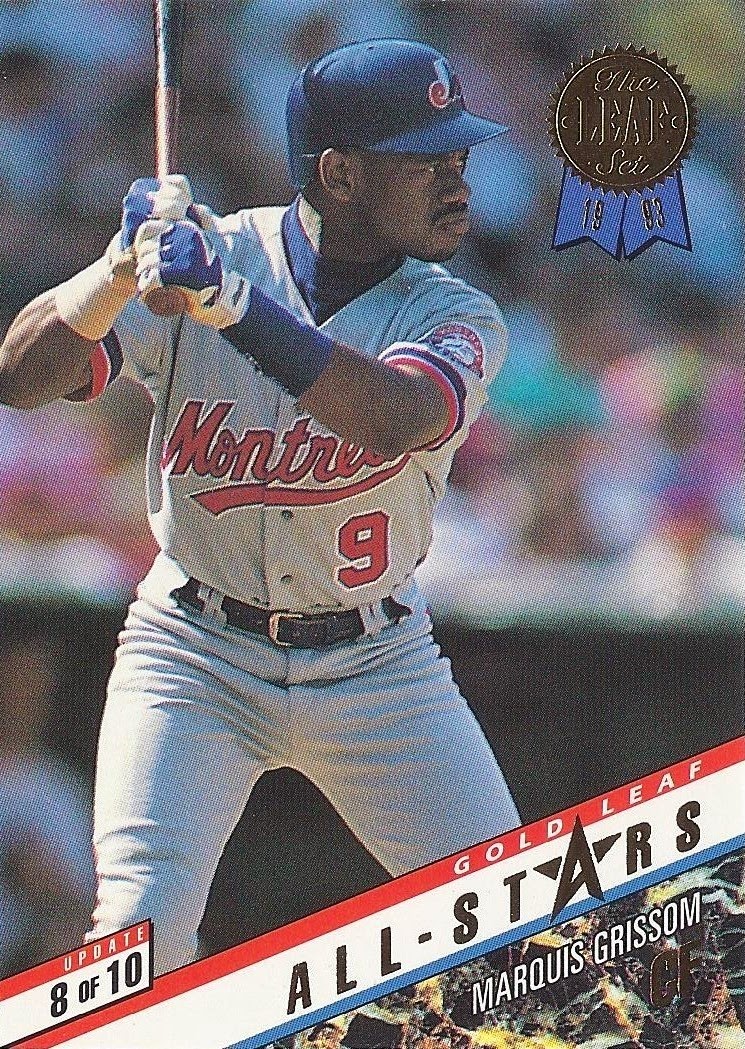 This expansion of the original Gold Leaf Stars insert was included with the ’93 Leaf Update set. It’s the same idea but with known All-Star players. This shot of The Kid is definitely not staged, but the best part of this particular card is the fact that Junior is paired with a PC of mine, Mr. Marquis Grissom. They, too, would share cardboard again in the 90’s.

I’d like to be able to say that there are ten more Griffeys the way there are ten more Frank Thomas cards, but there aren't. Fortunately the following two Leaf sets would be equally dudical and chock full of inserts featuring The Kid. I know a lot of folks are crazy for the 1990 design, but in my opinion ’93 through ’95 was Leaf at its base design best.
Posted by The Junior Junkie at 10:31 PM