Jumbo v. Hobby OR What is a Relic? 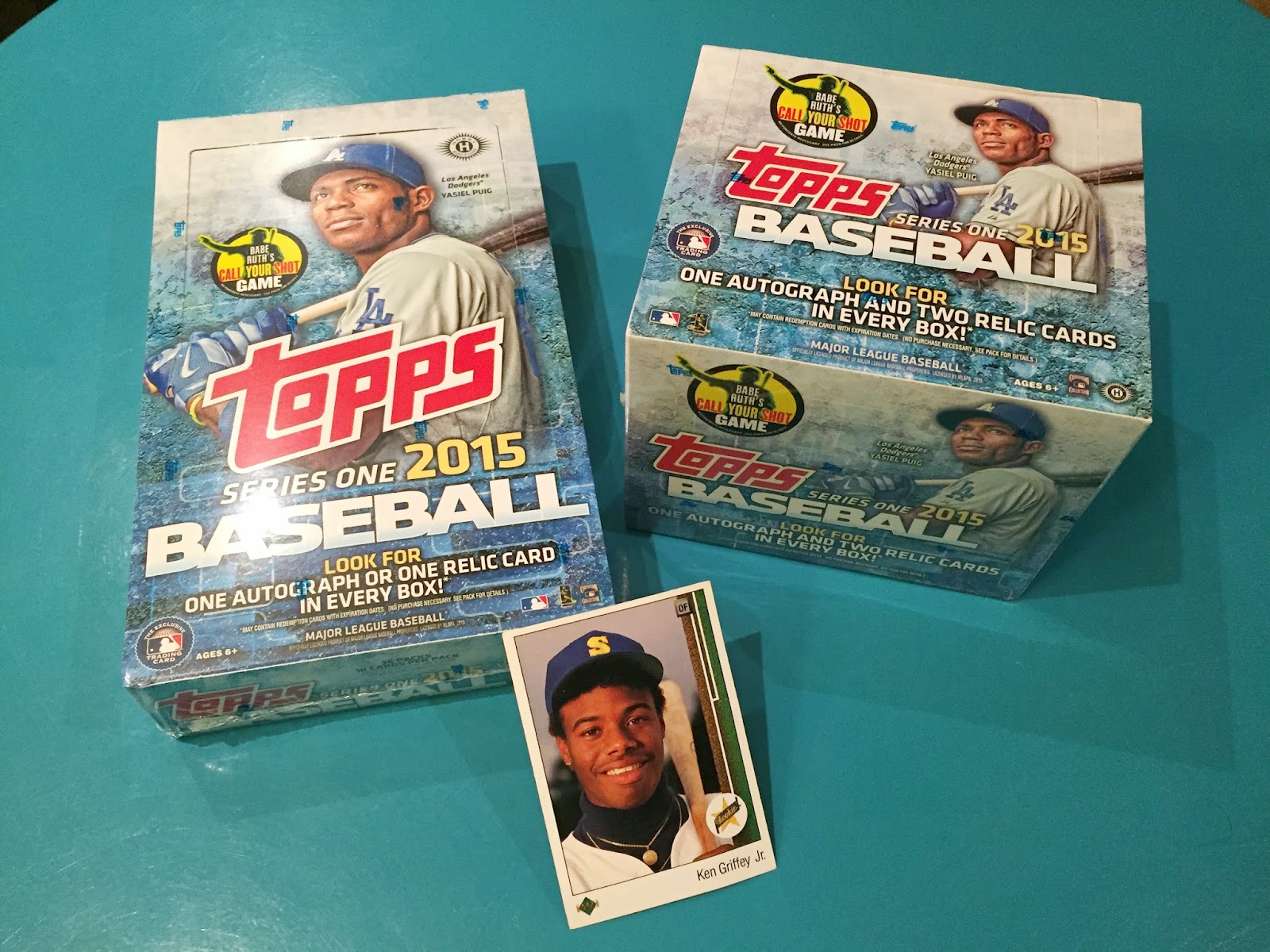 I got two boxes of 2015 Topps, one jumbo and one hobby, with the express goal of finding out which is a better box for my busy collecting lifestyle. Both boxes had their pluses and minuses (lots of pluses, actually, but one BIG minus). Let’s take these one-by-one: 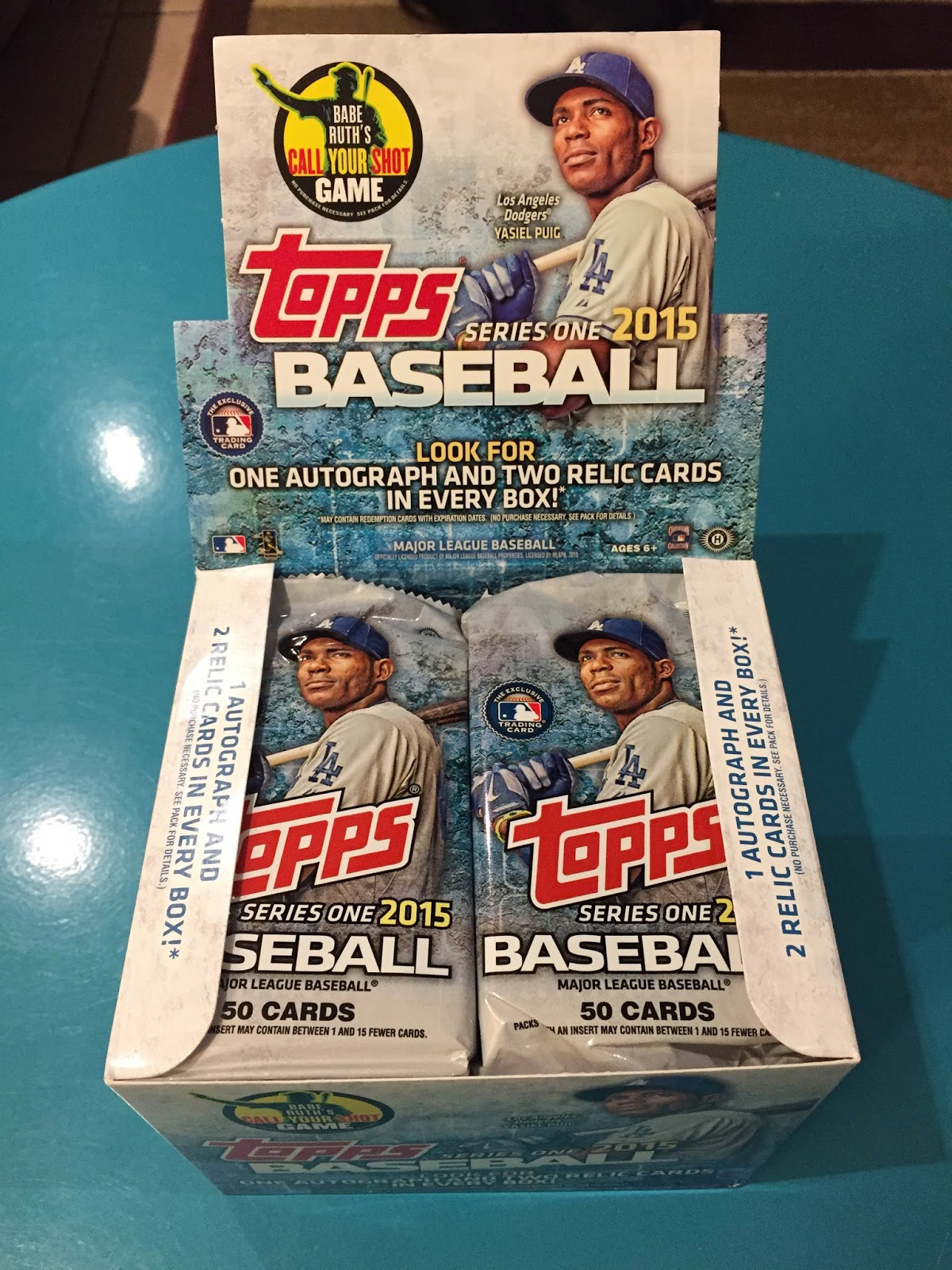 I'd never busted a jumbo in my life, so there was a lot to discover here.

The first thing I learned is that the nature of the jumbo packaging is physically bad for the cards. A little shy of half of them had a soft corner or two and a lot of cards had that ribbing embedded in the short edge from the packs being sealed by uncaring machinery. The bottom card in every pack was always an insert, too, so I pulled a lot of damaged inserts. Nothing of significant value was lost, but I was a little annoyed.

The jumbo box promised three relic/auto hits, at least one of which was guaranteed to be auto. In reality I pulled TWO autos and one relic. Great start. 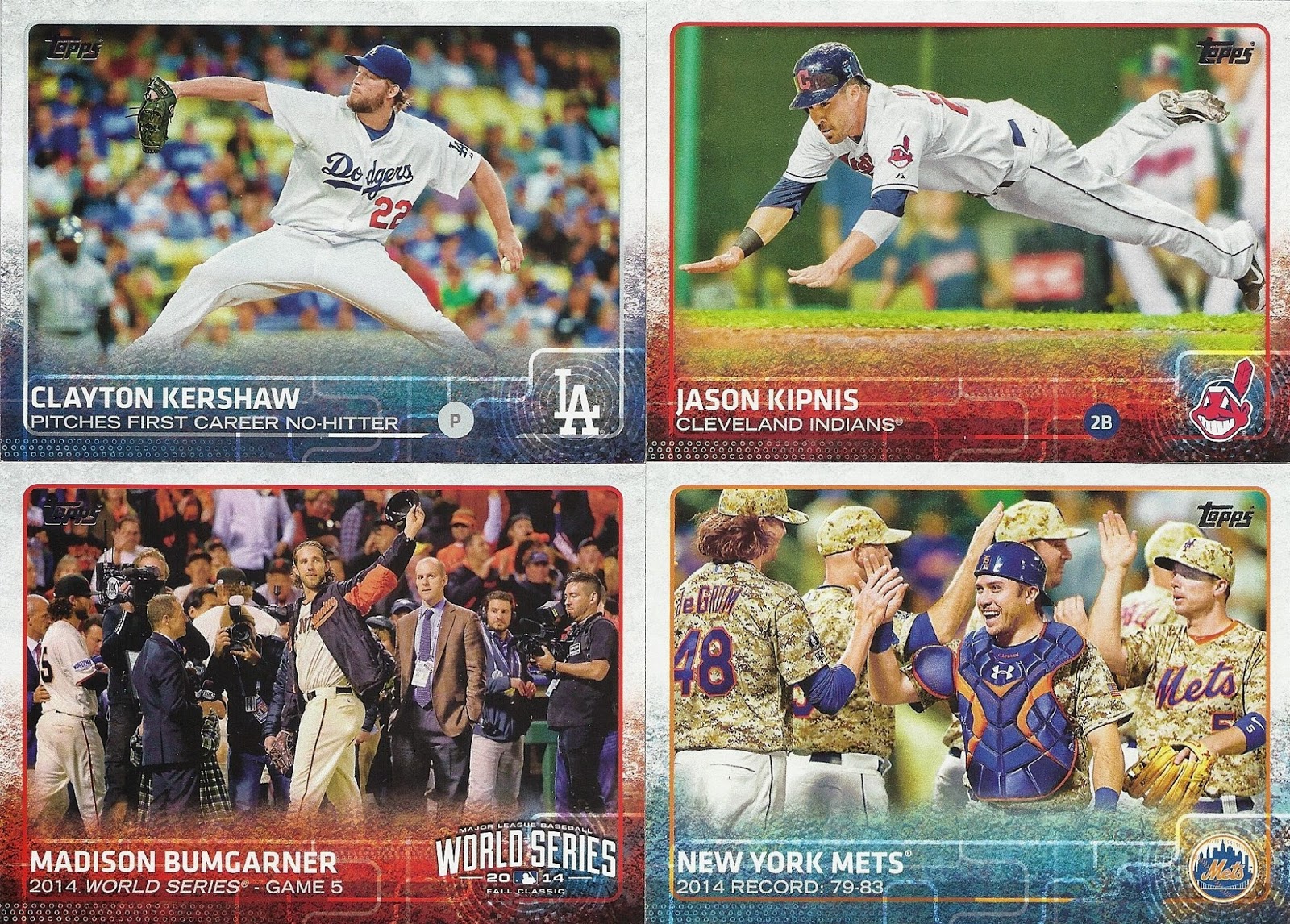 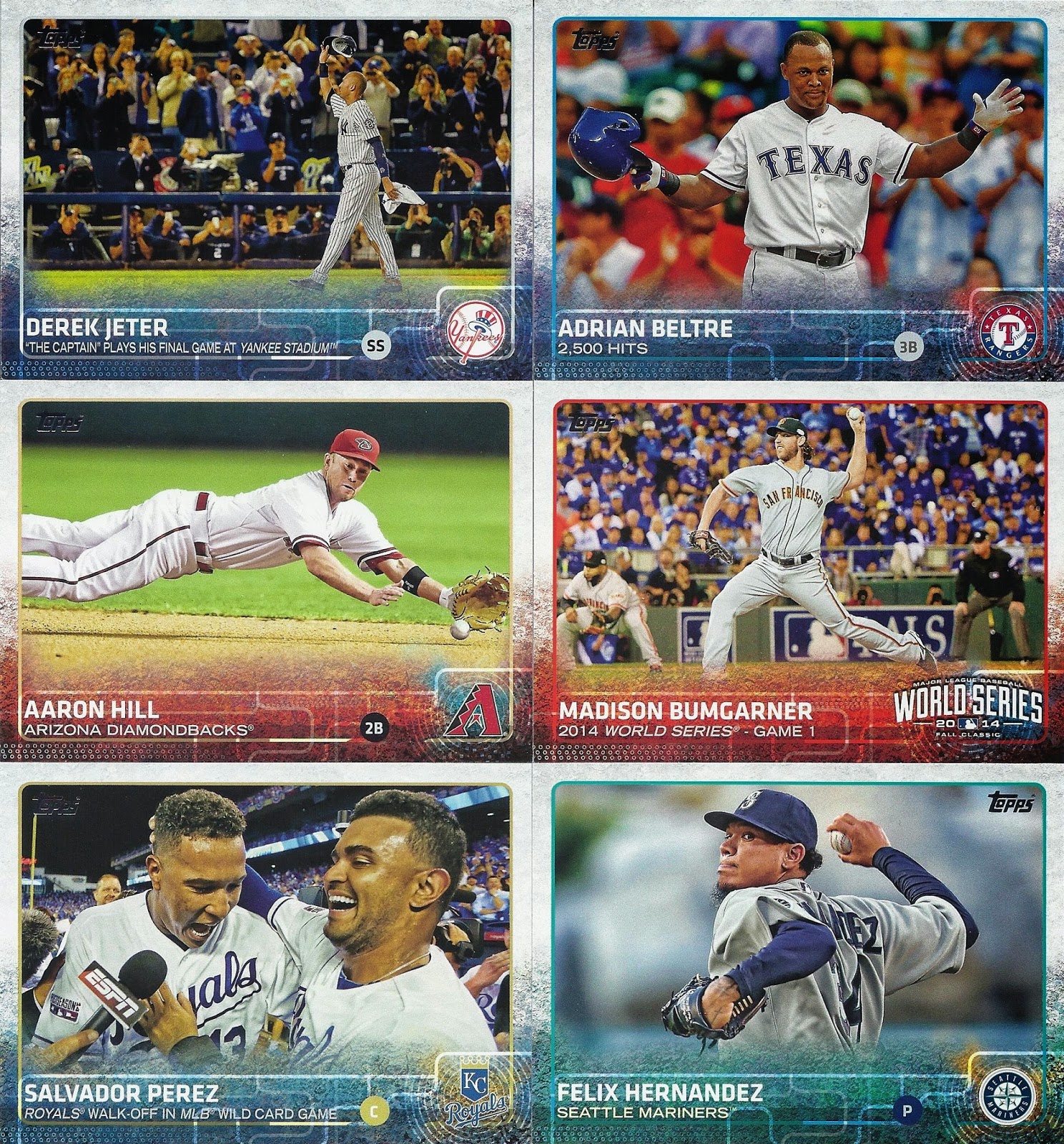 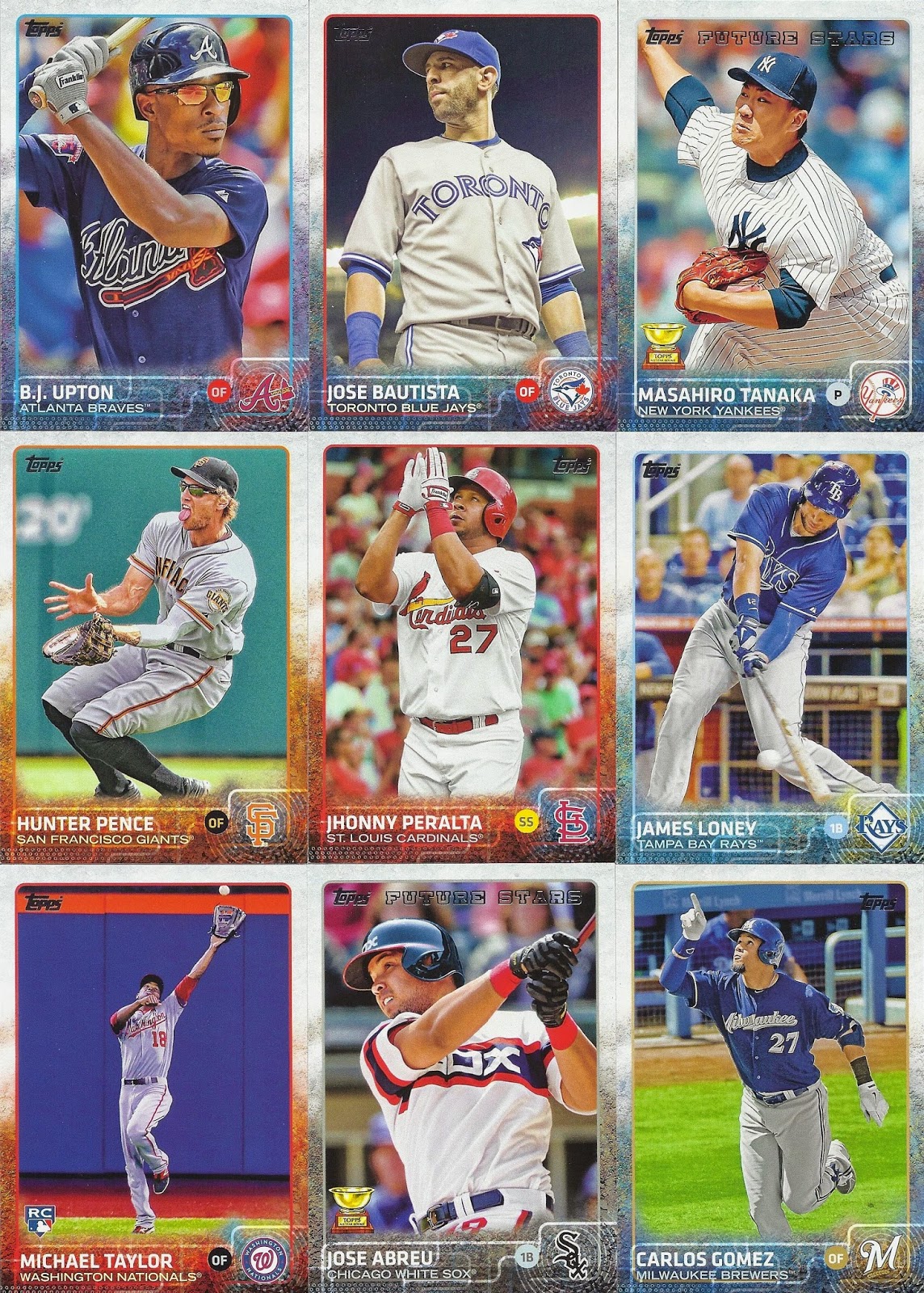 The jumbo box produced 76% of the base set. Having read that buying a jumbo practically guaranteed a full base set in previous years, this was disappointing. I also got a healthy stack of dupes for trades and keepers.

At the time I busted this box the Jeter base card was selling on eBay for five bucks, and I was disappointed that the Jumbo box gave none. Luckily the hobby box would not disappoint on this front. 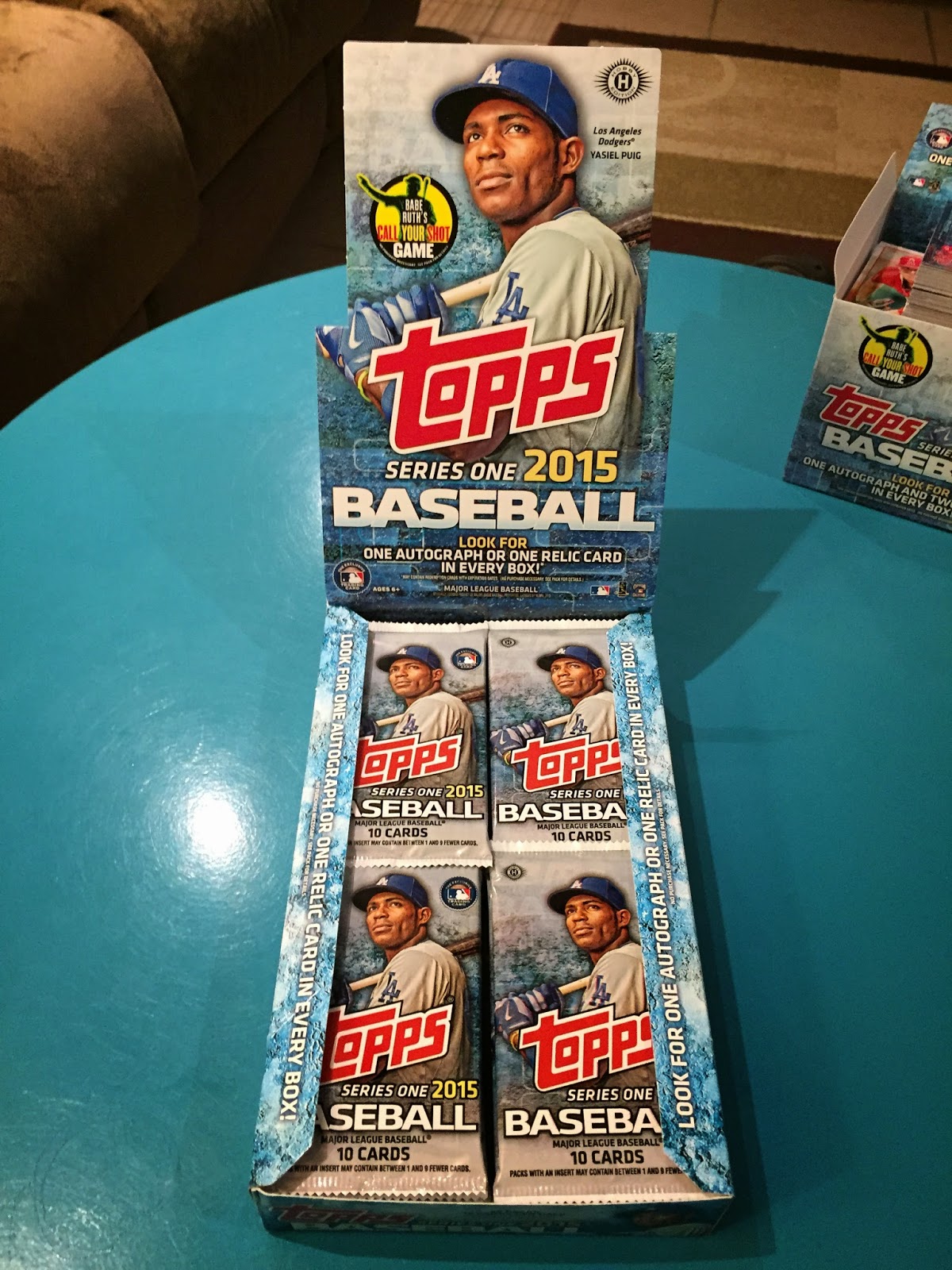 The most amazing thing about the hobby box was the collation. I got 87% of the base set and ZERO dupes. Exactly zero. Impressive! There was a moment when I thought I had a dupe, but it turned out to be a Kennys Vargas SP. After busting it I expected I could potentially end up with two base sets by the time I finished with the jumbo if it had comparable collation, but it wasn't even close. I am very close to two full base sets, though. 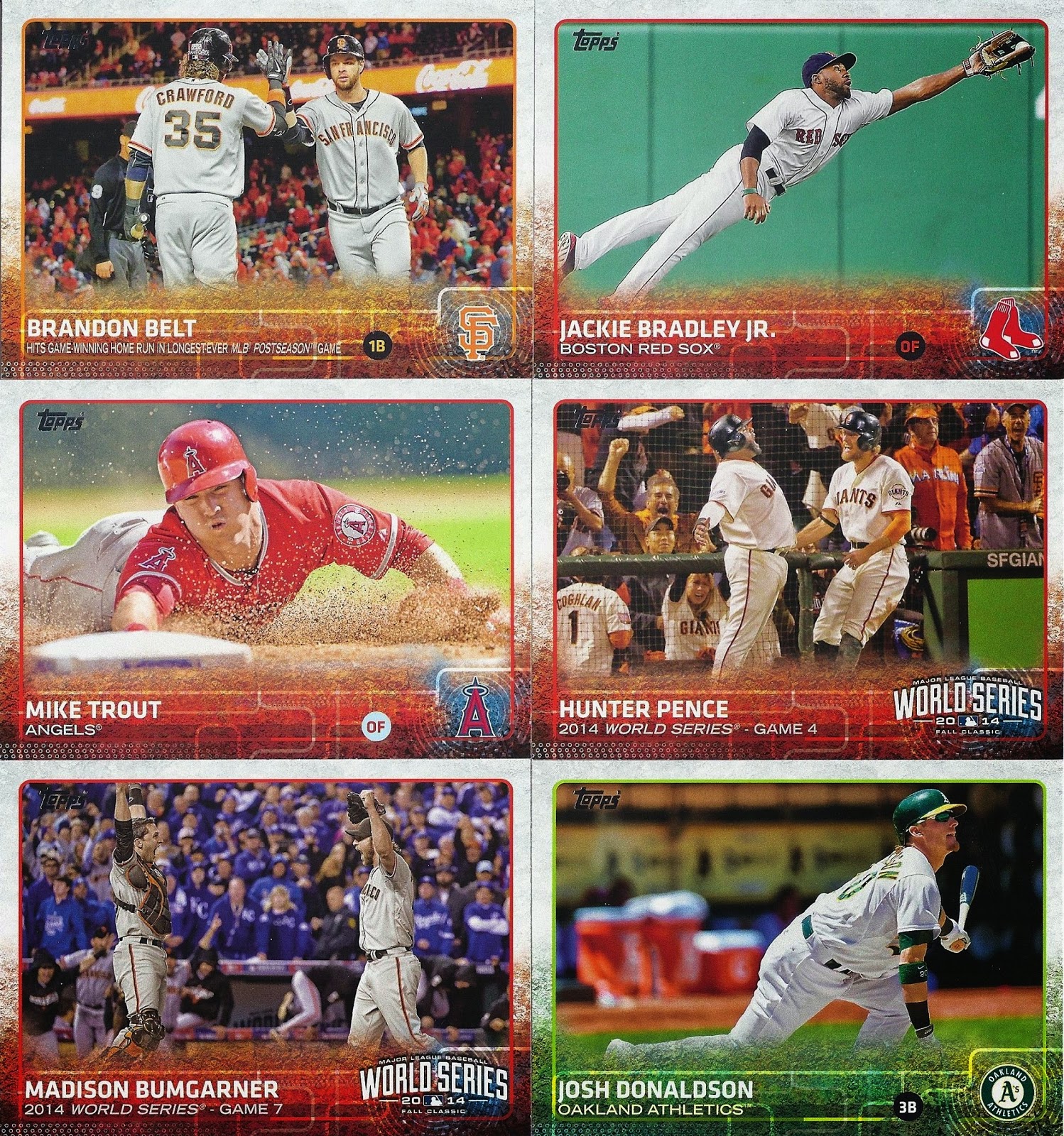 So, the big minus? I pulled zero relics and zero autos. In one of the packs was a Yadier Molina Commemorative MLB pin, but that is not a relic. It’s manufactured, the same way the cards are. I mentioned it to Topps a few times on Twitter but got no response. I've got to admit I’m still pretty raw about it.

I mean, are manufactured relics actually relics? Let’s talk about that word for a moment.


Okay, does this fit that description? 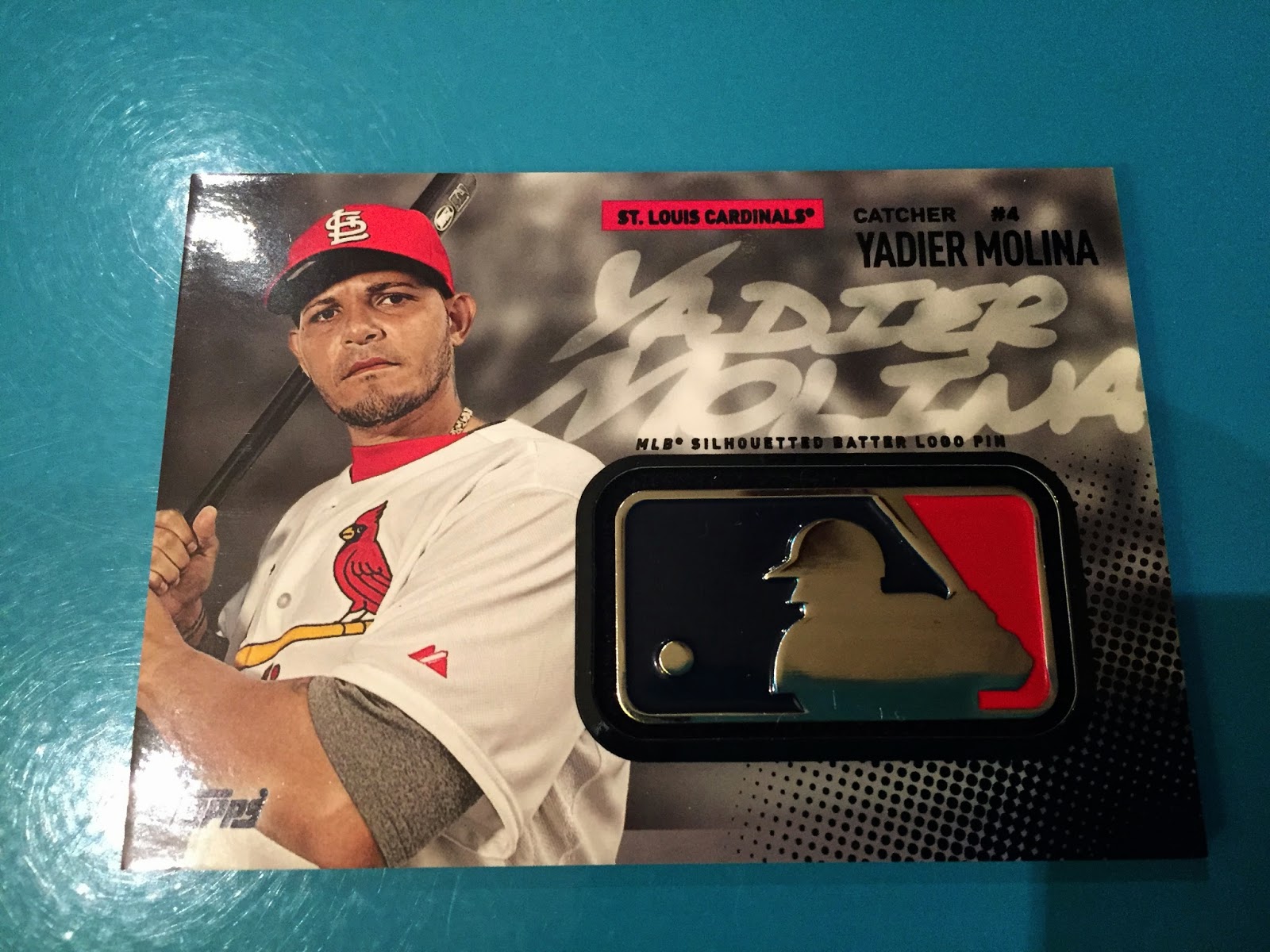 It's a great card, but is this “an object surviving from an earlier time?” Yes: a few months ago. It was made in a factory then glued to this card before being sealed in mylar and bought by me. This is from an earlier time in the same way that every photograph is of you in the past.

You know, I just so happen I have a real relic – like, really real: 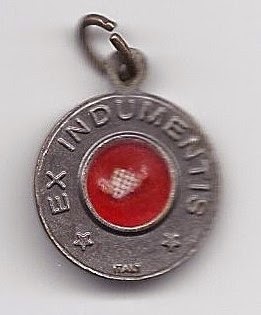 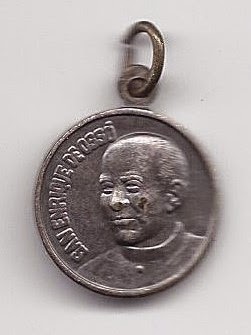 This is a medal given to me by a nun when I was in the 7th grade, and it contains an honest-to-goodness relic. It’s a tiny piece of the clothing of San Enrique de Osso y Cercello. This is what you would call a religious relic. He was canonized in 1993. Sadly, I have very little information on his baseball career.

I have another relic, too: 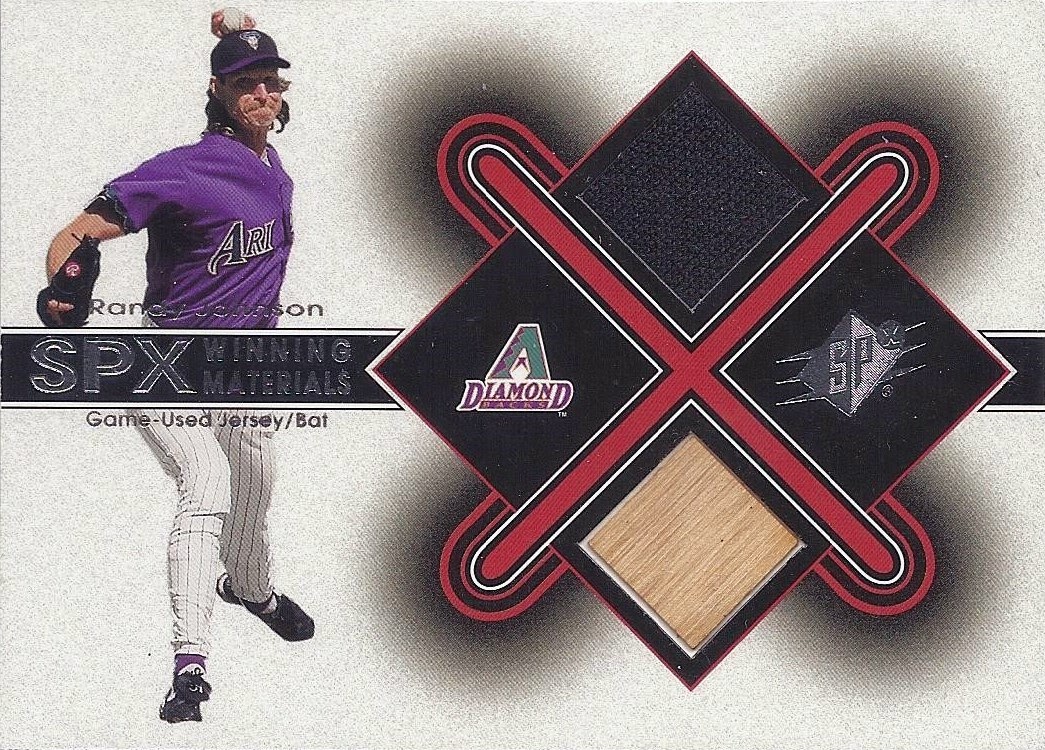 That’s a relic. Its two relics, even. THESE ARE RELICS. 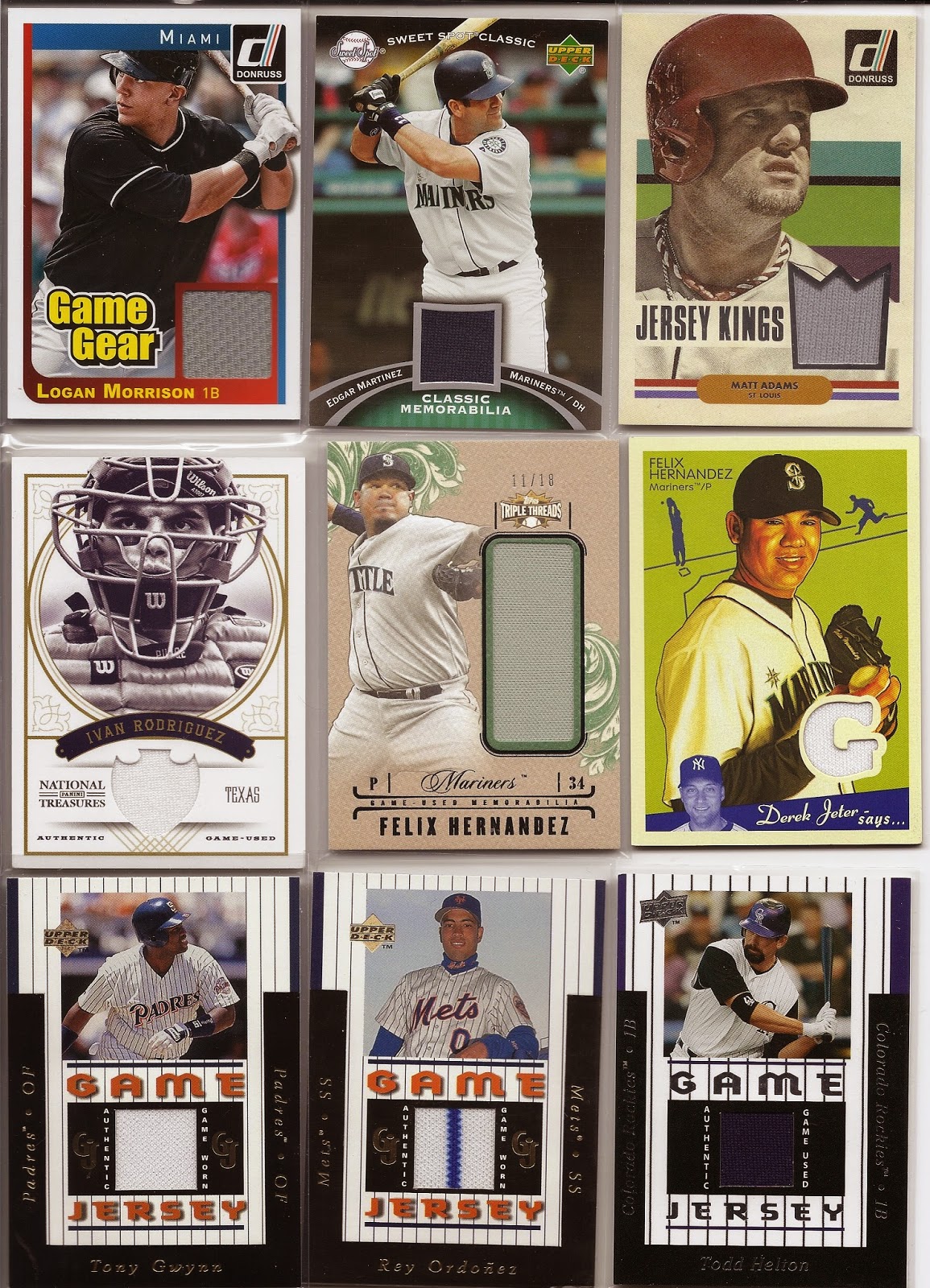 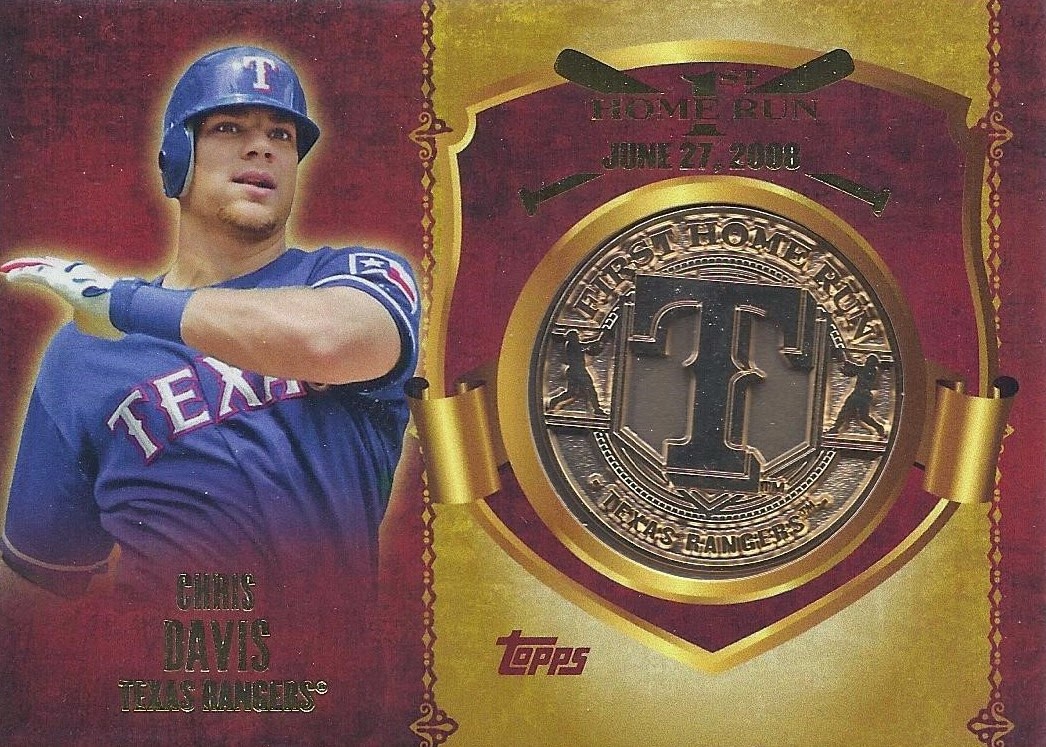 Ok, see? Not a relic, but this comes from a blaster which is something we buy knowing we’re not getting a relic. It is not represented as a relic. On the other hand, according to that hobby box, the definition of relic is “something attached to a card that isn't card” as in “This card has a relic on it,” or “This card contains a relic.” It can't just be anything. So why the sudden double-standard?

That metal thing glued to my Yadier Molina card is shiny and cool and fun to pull, but the fact remains there were zero relics in that hobby box, my friends. Zero.

I should clarify that I really like manu-relics, provided you don’t call them relics. So ignore the little advertisement on the hobby box guaranteeing you one autograph or relic card per box. It is possible to not pull any at all. It happened to me.

Jumbo Minuses: some damaged cards, far short of a complete base set especially compared with a hobby box, higher price

Hobby Pluses: huge chunk of the base set with no duplicates, SP pull

Hobby Minuses: Topps counted a manu-relic as a relic

If circumstances had been better hit-wise, I would be gung-ho hobby here. Unfortunately I’m a little soured on the whole idea of trusting your sole hit will be just that – a hit. I typically buy only one hobby box of flagship per year (this year was the exception), and while my 2014 hobby box was fun and value-packed, this one was kind of disappointment. The SP helped, but this year the Jumbo came out on top.

The Bautista is spoken for, everybody. Sorry! 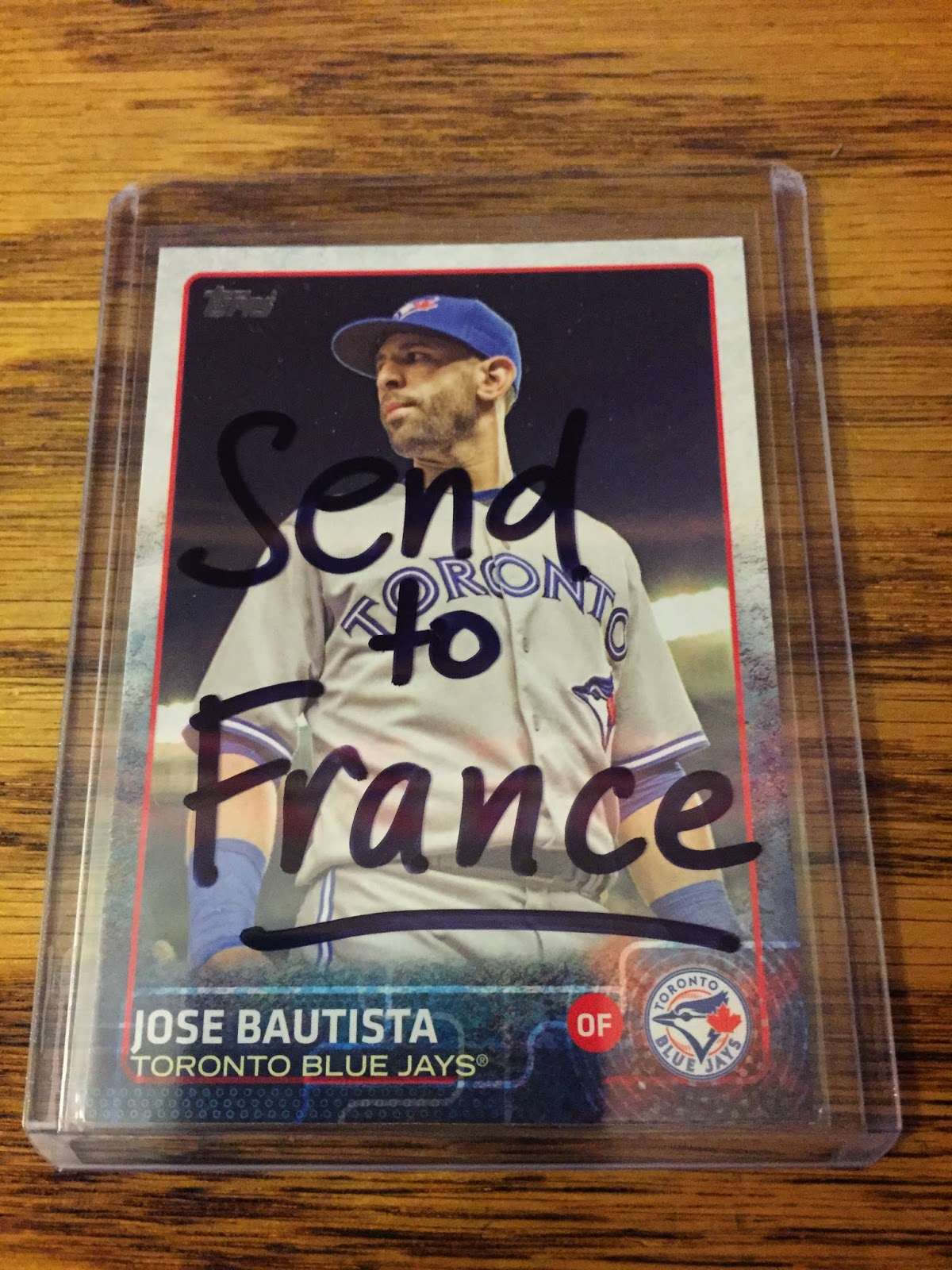 Posted by The Junior Junkie at 1:02 PM