This is pretty low-hanging fruit as Design Timelines go, but I happen to have just enough time at this moment to handle a short timeline like this, so here we are. Plus I haven't done one of these in like FOUR YEARS, so maybe I need a little practice.

I'll be honest: I don't have a real handle on why Black Diamond exists. It always came out in December/January when there is no baseball, and there doesn't appear to be any one unifying theme to the base sets. They feel a little money-grabbish.

I like to dream up the scenarios that may have led to the creation of totally indefensible sets like this. In this one an Upper Deck executive yells about the drop in sales during the winter months, and the head of the baseball division responds by correctly describing the baseball card market as seasonal, but the executive just isn't having it, so they drop a totally unnecessary set with a thinly-veiled winter reference (black diamond is a skiing term) at a time when everyone is focused on football.

Granted they did give us some memorable parallels and a number of incredibly cool inserts, but we are not talking about those today. Today is about the base cards. These came out in December 1998, January 2000, and December 2000, respectively. That is the kind of thing you can expect from a set that drops in the turn of the year - smooshed timelines - but at least they were released far apart enough from one another to be distinct. 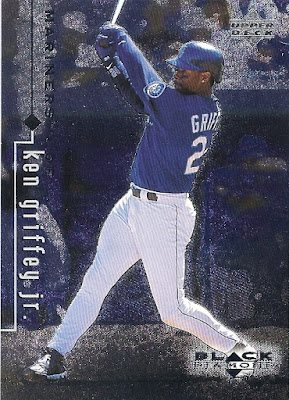 This one rocks a simple, attractive vertical nameplate and little else save for an admittedly cool brand logo. The big highlight here is the etched foil that forms the photo background, an effect that I would agree deserves its own base set. A nameplate like this ought to let the photography do the talking, but that is a lot harder to pull off when the background of every photo is overtaken by etched foil. Still, it's holding its own. 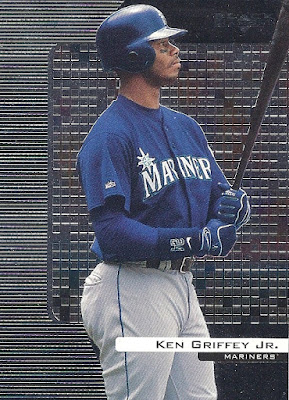 At first glance this appears to be a massive design shift, but there are remnants of the photo background here that are still obscured by etched foil albeit all patterned and orderly compared with its predecessor. The nameplate is as boring as a blind guy watching a silent movie, but the rest is...well it's less boring than that, at least. There is a parallel featuring die-cutting along the left edge that causes the design to make a lot more sense, but it also makes all the non-parallel cards (which is most of them) appear incomplete. 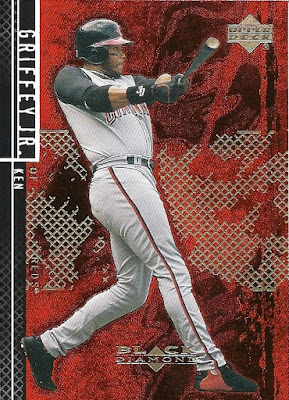 We get another vertical nameplate here with a few extra lines, you know, for the sake of lines. I dig the new font, the gold foil, and the centered brand logo.

Then - and this is my favorite part - they bathed the etched foil background in blood (for every team, not just the red ones) so the player appears to floating in front of a gaping, fiery hellmouth complete with...bits of broken fence?

This one is weird, but it's also my favorite Black Diamond design, so I'm not saying it doesn't work. I am saying that if you take away the nameplate, the logos, and the player photo, what's left could be one of the fast-cut images projected in the Willy Wonka horror tunnel. I mean that as a compliment.

And that's all she wrote.

I feel like there was some valid reason for these sets that one sentence from an Upper Deck insider could clear up. Maybe the trademark on the name/logo would expire unless they used it, or it was a proving ground for new designs, or (my pick) they just wanted a sales bump in the baseball-less Winter months. It's funny how much of this hobby is business and marketing-related guesswork. How about a little transparency? We have questions!