1989 Mother's Cookies and the Weirdest Thing in My Collection

If you’re a fan of oddballs, rookies, single-player-exclusive sets, or food issues, you’ve come to the right set. 1989 Mother’s Cookies is all of those at once.

Mother’s made five Griffey cards in his rookie year: a set of four cards that were sealed one card at a time in plastic sleeves and included in specially marked bags of Mother’s Cookies, and a Stadium Giveaway card that was included in the larger Mariners team set. All the cards have a similar design: a full-bleed photo with a small nameplate and rounded corners.

The most common Mother’s Cookies Griffeys you’ll come across in the wild are from that four-card set, so we’ll start there.


This one is still sealed in plastic, and I have no intention of un-sealing it for the sake of a clean scan. But you're not missing anything - all four cards look pretty much like this: Junior posing in the foreground and an empty Kingdome in the background. They’re so generic PSA even titles the four cards by what Junior is doing on them. For example, this one is noted on PSA flips as “Arms Folded.” Kinda weird as that is what I thought card numbers were for. 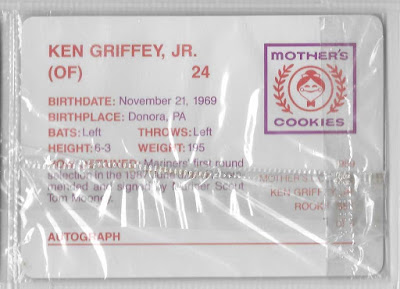 The backs are all the same, too, except for the blurbs. This one describes the scout who “discovered” Junior, but come on. Like no one was going to notice.

The backs also have the audacity to include a space for autographs. If anyone has a legit autograph in the designated autograph space on the back of a Mother’s Cookies card, please send me pictures. Also answer me this: WHY WOULD YOU HAVE HIM SIGN THE BACK OF AN ODDBALL INSTEAD OF SOMETHING COOL LIKE A BASEBALL OR EVEN THE FRONT OF THE CARD? WHYWHYWHYWHY? 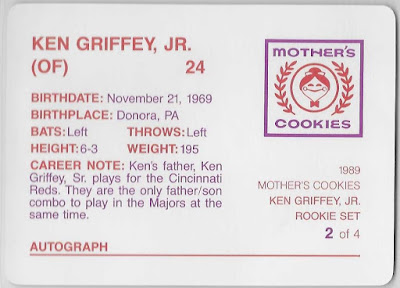 Card #2, aka “Ball in Hand,” mentions Junior’s Pop. Two years later when both Griffeys were Mariners Mother’s would dedicate yet another four-card set to the father-son pair, but that is another post. 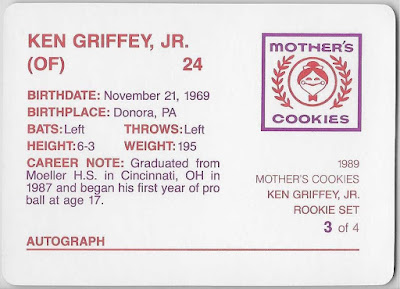 #3 or “Bat Over Left Shoulder” is my favorite of the set. Why? It’s that perfectly-executed bat photo. Junior’s Upper Deck, Fleer, Donruss, Donruss “The Rookies,” and even his Topps Traded rookie all went with the same “bat over left shoulder” photo. Bowman and Score were the only major-brand holdouts, and their rookie cards of The Kid kind of sucked. Fleer and Donruss did it right, but their rookies were either super sweaty (Fleer) or uber blurry (Donruss). I don’t think anyone will argue that the best-looking Junior rookies are the Upper Deck, the Topps Traded, and – you guessed it – Mother’s Cookies Ken Griffey, Jr. Rookie Set #3. 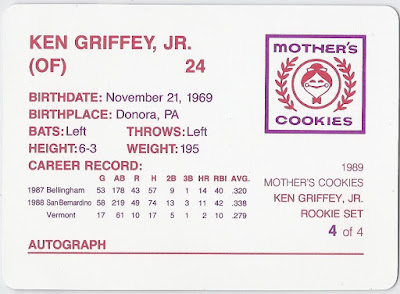 #4 has far and away the clunkiest PSA title: “Name on Back Showing.” Ugh.

The cards were also released in a sealed pack of all four Griffeys: 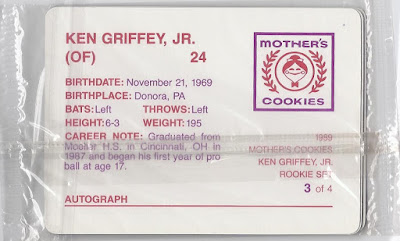 I imagine you had to buy a lot of cookies to get one. Somehow card #3 made its way to the back, and as much as I'd like to bust this thing open just to fix the order of the cards and put my OCD at ease, it just ain't happenin'.

As I mentioned these cards were released in specially-marked bags of Mother’s Cookies way back in 1989. Now, 31 years later, it’s hard to imagine any of these bags still floating around intact. And yet in a move of over-the-top fanboy extremism even I consider pathetic, I gave somebody money for one:


Yeah, I bought a 31-year old bag of coconut cookies because of this baseball player I really like. It even made it into my Top 10 list the year I got it. I have no plans to open it, but there is definitely a Griffey inside. This is certain. It remains the weirdest (yet somehow not the grossest) Griffey item I own. Oh, and the cookies even feel more or less intact. It now lives on sealed in a ziploc high above the floor where dogs and children and insect and inebriated Junior Junkies cannot get at it.

I should mention that I love coconut. It is not impossible that someday I will have a level of munchies strong enough to convince me to open the bag and devour the contents (trust me - I’ve done way stupider stuff just in the last two weeks). If this happens I will report back here how those 31-year-old cookies taste.
UPDATE 4.30.2021 - I found them! I found two bags of Mother's Cookie Coconut Cocadas on the Internet for $18.04 shipped, and they are en route to my house as I write this. There was even a single 5-star review on walmart.com that read simply "Willie." When I receive them I will be sure to fill you in on how these bad boys are apparently meant to taste but almost certainly no longer do. I am approximately 34 years too old to be this excited about getting cookies.

It’s going to be hard to top that bag of cookies, but we’re going to try: 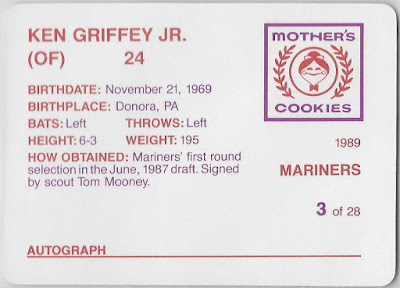 The least common Griffey from 1989 Mother’s Cookies is this Mariners Team Set Issue. These came in blue packs that were given out at games.


That paragraph on the back might be may favorite bit of text on any pack ever. These encouraged trading among fans, a fantastic idea in the time before social distancing. Do any ball clubs still do this?

This trading thing would make you think there are not a lot of cards left in decent condition, but with those rounded corners (again, perfect for trading) there remain many high-grade specimens. Even I have one: 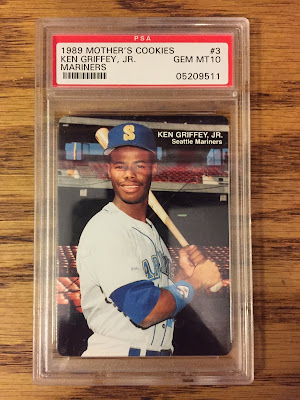 I'm not a big "grading" guy (that is one expensive rabbit hole), but any PSA10 Griffey rookie is something special.

Mother's went bankrupt in 2008, but now they appear to have been acquired by Kellogg’s. Mother’s website is active and you can buy more recently-produced, utterly Griffey-less bags of their famed iced oatmeal cookies via Amazon (though just looking at them is spiking my A1C). I've got to admit, I want to try them. Marketing: successful.
Posted by The Junior Junkie at 8:30 AM