[A quick personal note before we start: baby boy #2 is due ANY DAY NOW, assuming he hasn't popped out already (this post was scheduled 2 weeks ago). I've been trying really hard to keep up this once-a-week pace, but it may not continue. Not that anyone waits around every Monday morning with bated breath for my latest post to drop. Just know that it may be another four years before I can post with any kind of regularity again. OK, on with the show...] 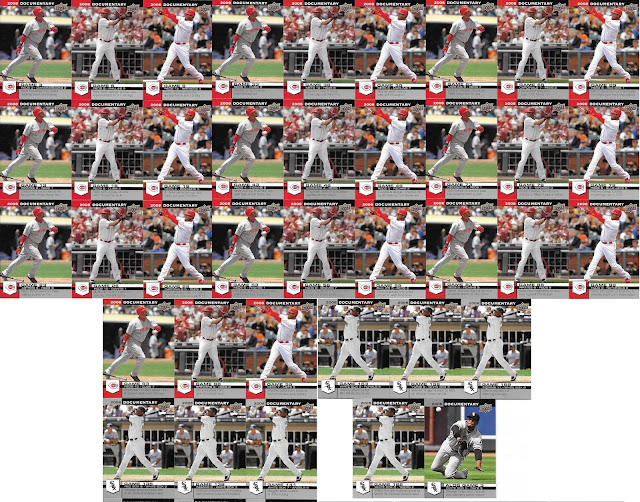 It seems like competing brands sometimes get wind of each other trying out new ideas in the market and feel like they have to do it too just to stay competitive. This appears to be true even if the idea is not a good one. Cards in cans, antebellum throwbacks, lenticular printing, anything with Barry Bonds - we don't really need any of these things, but we got them anyway.

In 2008 the hot new terrible idea was the super-high-concept mega-set. Topps had released the absolute garbage Moments and Milestones (check that hot mess out right here), so of course Upper Deck got a case of the "us-too's" and started work an something even more ridiculous ambitious.

But Upper Deck had an ace up its sleeve in the spectacular 2008 SPx American Hero insert (which I wrote about just last week). They had shown they could also make something high-concept and make it work. Unfortunately it didn't really flesh out like they had hoped.

This set is BIG to say the least, so I’m just going to go nuts-and-bolts for a moment and give you the Baseballcardpedia description:


“2008 Upper Deck Documentary was a massive 4890-card set that ambitiously attempted to document every single game played in the 2008 MLB Season. The set was released December 18, 2008. Unfortunately due to the quick turn-around time involved, very few of the photographs used match-up to the game date in question -- in fact there are many instances of the player depicted on the front not even playing in the game.

Each of the 30 teams has 163 cards -- one for each game plus a season in review card -- meaning that each individual Major League Game played in the 2008 season actually has two cards in this set.

An additional 64 cards were inserted into packs of 2009 Upper Deck Series One.”

Okay, clearly this has the potential to go off the rails a bit. We are all but guaranteed a post with way too many scans of what is essentially the same couple of cards over and over again (and yes, that is coming), but there is another aspect of this lunatic set that is worth a second look. Maybe even a double-take. It’s nuts.

First let's look at one base card just so you can see what we’re dealing with here: 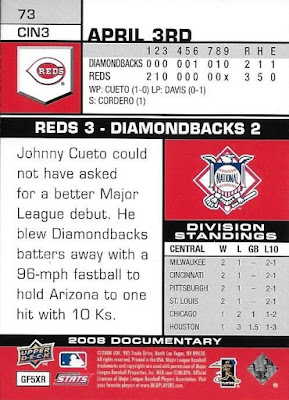 The cards are dry and matter-of-fact, all done up in team colors and silver. They each sum up the game in a sentence or two with a basic box score on the back as well as divisional standings up to that point. Like Topps Total before it, these have team numbering in addition to overall set numbering. Griffey made it onto 41 cards in the base set within both the Reds and White Sox team subsets.

The part that sticks out the most here is that the subject of this "Griffey card" is rookie pitcher Johnny Cueto. His performance is praised in blurbs on both the front and back. So why, then, is Griffey on there at all? From what I can glean out of the small amount of data on here Griffey didn't contribute much at all to this win.

This part contains a lot of griping, so I stuck a TL;DR below in case you're not *really* on this journey with me.

In last week's 2008 SPx post I kept bringing up photo context, and here is the reason: the fact that 2008 Documentary and the 2008 SPx American Hero insert both came out in the same year raises questions.

The American Hero insert is an impressive feat in terms of card design, photo selection, and context; yet Documentary, which attempts something similar, doesn't even approach that insert's ability to build a timeline and assign appropriate photos to it. This is not an insert - it's an entire sub-brand we are talking about. And it's built on almost the same premise only on a larger scale (a whole career of one player vs. a whole season of, well, pretty much every player).

The problem is they picked only a handful of images for each team and recycled the daylights out of them. Even the card numbering drives this point home. Griffey is on cards 73, 76, and 79. Add 300 to each of those and you get the next three Griffey card numbers: 373, 376, 379. This simple "just add 300" formula applies all the way up to Junior's trade to the White Sox at which point Griffey shows up on card #4010, then every 90th card all the way to the end. His final card is #4900, the highest card number Griffey has ever had (that I'm aware of, at least).

In fact the 41 Griffey cards in this set use only FIVE different photos. Four photos in particular are used a whopping TEN TIMES apiece. Only the final card got a photo different from the rest. That is some hard-core, no-holds-barred, unapologetic, all-up-in-yo-monkey-face photo recycling.

What Documentary does well is pick out something worth mentioning from every single game - and that's great - but the blatant photo recycling, often including players who didn't even play in the game referenced on the card, is downright insulting. They might as well not have photos at all - they could just as easily have been flashcards with stats and team logos. How did this happen in the same year (and probably by a lot of the same cardboard engineers) who made the rock-solid American Hero insert?

This is starting to sound like another 2008 SPx post, but I feel like that oversized insert and this way-oversized base set have a lot to talk about. My theory is that the Griffey American hero insert did such a great job at portraying a timeline in an appealing way that somebody (possibly in a suit) had the idea to build a whole "season set" around it, but the nuts-and-bolts guys just couldn't pull it together in time; so they settled and put out what they could, namely a sentence or two about every game and a random, often only loosely-related photo to slap on there with the text. Or maybe it was a photo licensing issue and the costs grew too high. Either way it was either somebody's poor judgement or a blatant money grab that led to its release.

TL;DR: Photo context like that found in the 2008 SPx American Hero insert might have saved 2008 Documentary but it was either too much work or too expensive to accomplish, and yet it got released anyway.

Apart from being way too ambitious/difficult/expensive/whatever, this set was high-concept beyond practical marketability and, frankly, doomed from the start. I mean, who is it for? Set builders? Player collectors? Maybe team collectors would enjoy trying to get their favorite team’s entire season on cardboard, but come on. 163 games? That’s too many to fully appreciate IN REAL LIFE let alone on cardboard. They're not all going to be barn-burners.


I can't even remember the last repack box I bought that didn't include at least one pack of '08 Documentary. 12 years later and they're still trying to unload packs. Ouch.

So of course there was a parallel, and for pretty much the remainder of this post that's all we are going to talk about. There is nothing intimidating about it on the surface where it seems like just another run-of-the-mill, even boring, parallel. And on the surface the stats reflect that. They’re one-per-pack, 24 per box like so many of their boring, everyday parallel brethren. Ho-hum, right?

Well with 4,954 cards in the checklist (that number is including the 64 additional cards seeded in 2009 UD Series 1), the game changes significantly. The total number of 2008 Documentary cards Upper Deck would have had to produce to get a scarcity level for golds comparable to other 1-per-pack parallels would be astronomical, something like 20 times the normal quantity produced for most non-flagship base sets. Since there is just no way they made THAT MANY, the full checklist of golds from this set should be and is absurdly difficult to complete.

And if you collect a popular guy who made it onto a lot of cards (again, that’s 41 for Griffey collectors), the amount of time and patience you would need to get them all is approaching obsessive.

I am obsessive, and yet I have only four of them, a hair under 10% of those I need to complete the full checklist of Griffey golds. And I have been actively looking for them for a while.


There's not much to them - just a foil "2008" stamp and a field of gold where the base cards are silver. The backs are identical to the base cards. Very unassuming for how few there probably are.

Now I often keep my mouth shut when it comes to difficult long-term Griffey-collecting objectives lest anyone weird enough to read this blog decide they, too, want to give it a go thus hampering my own efforts (it only takes two to make a bidding war). And while acquiring every Griffey gold from this set has been a side-project of mine for a few years now, I’ve decided that my time and money would be better spent on other goals. I simply don’t like the cards enough.

But I know Griffey collectors more obsessive than me, and I know some of them read this blog. So to them, consider this post a challenge. I want to see someone finish this sucker off. The first that does it AND e-mails me good-quality scans of all 41 Gold parallel Griffey cards, I’ll send you a box of Griffey goodies.

Maybe you already did it. Great – scan them and e-mail me. Maybe you’d be willing to throw money at the challenge. Great! There’s a guy on eBay selling the full team sets of golds for the Reds and the White Sox for $250 EACH. That’s $500 for 326 base card gold parallels, or $1.53 per gold, far less than they are worth in terms of scarcity. Right off the bat the buyer would win this challenge, but where’s the fun in that?

A simpler challenge is to build the entire base set, and here it is: 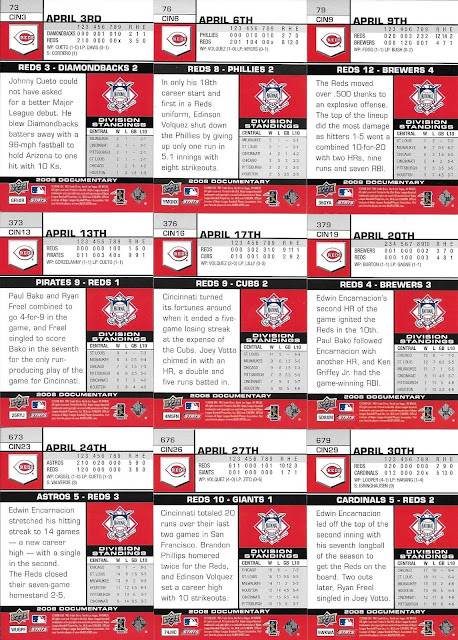 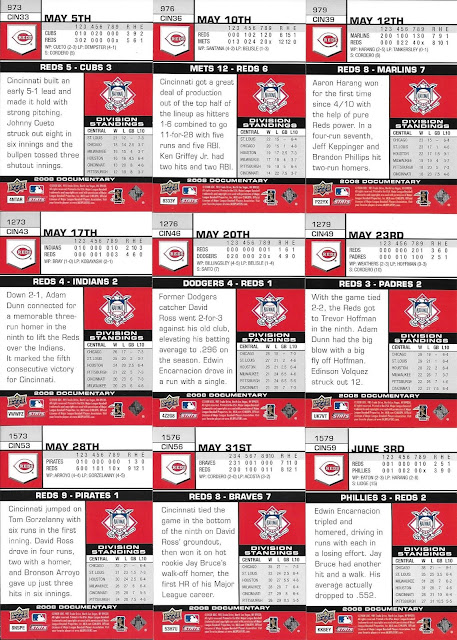 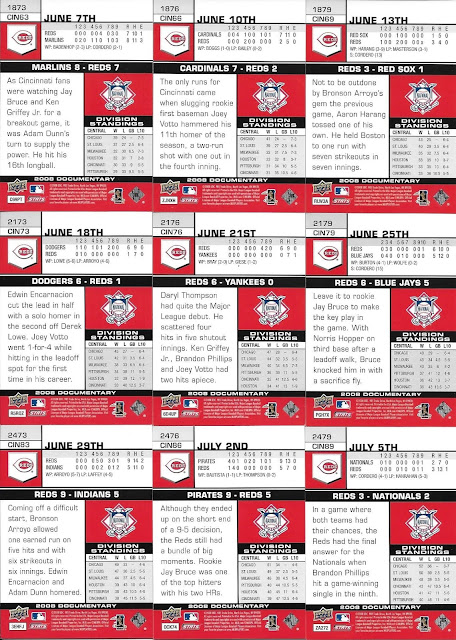 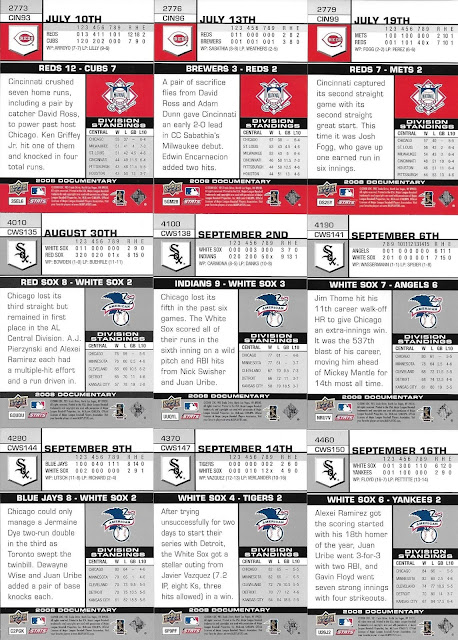 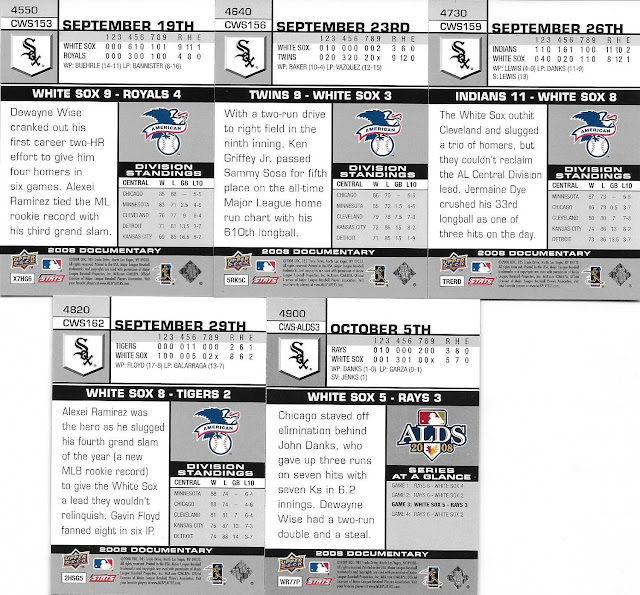 This isn't as hard a build as it looks. The cards are pretty cheap despite the fact that with a base set this big they are likely more scarce than most regular base cards.

There were also inserts for the Home Run Derby and All-Star Game that did not have Griffey in them, and one sticker autograph insert set that did. Without further ado here's the substantial list of cards I need from 2008 UD Documentary:

Mostly golds, obvy. But yeah, you can have ‘em – I’m peacing on 2008 Documentary. Get thee behind me, Satan.

[Fun note: After completing this post I bought another gold. The hell is wrong with me?]
Posted by The Junior Junkie at 8:30 AM