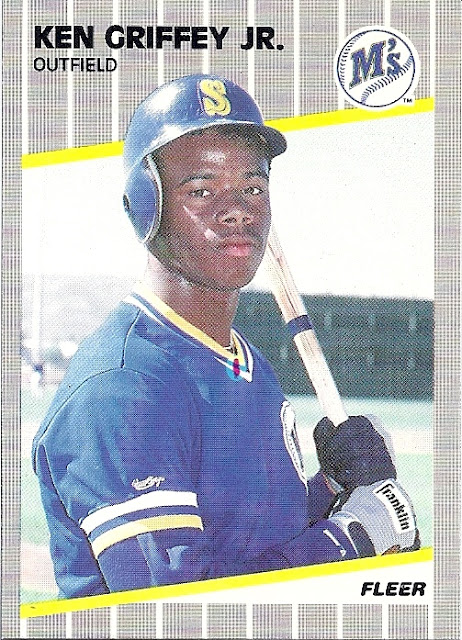 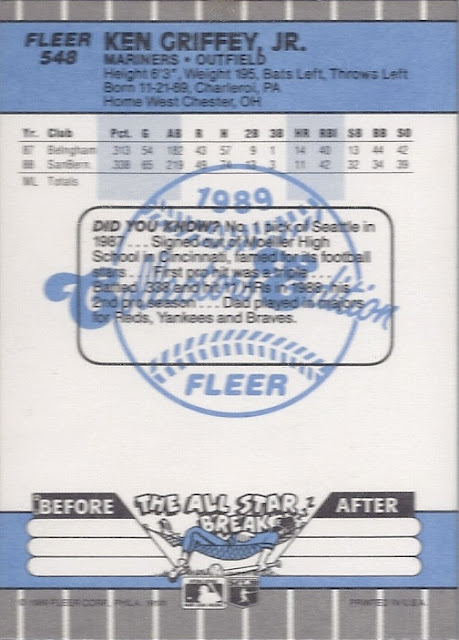 In my collection: 1 Tiffany, 12 regular

Is this a good Griffey card?: Yes.  It’s a Tiffany rookie, Griffey’s 1st Fleer card, and features a rarely-disheveled Junior in the midst of spring training.  Definitely my least favorite major company Griffey rookie, but did I mention it’s Tiffany? 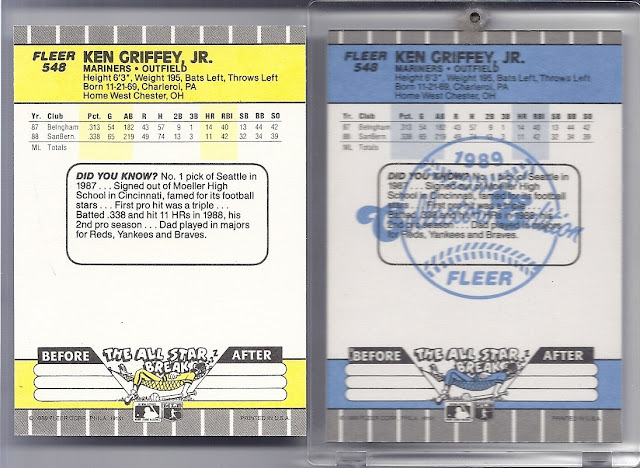 Behold!  This is from the esteemed Collector's Edition of 1989.  The regular edition just wouldn't do.  I needed the glossy front, the blue back, and the mighty seal of the CE.  I hope you enjoy not being able to read the very interesting Did You Know? facts from the back of the card compiled by the ghost of Frank Fleer himself.

Beyond that and the shorter print run on the Tiffany sets, I don’t believe any differences exist.  ’89 Fleer featured full-bleed printing on the front and nice, clean white cardboard composition allowing for excellent readability on the back.  And check out all that gray.  Mmm….pinstriped gray with yellow trim.  Kids love gray.  You know what else is gray and yellow?  Nothing.  Know why?  It’s ugly.  Like parking lot ugly.  Picking on late 80’s design is like shooting fish in a barrel, so I’ll stop here.

Cards in this set hold before- and after-All Star Break performance in high esteem for some reason.  In fact, this is the only set that I know of that does this.  See the little man in the hammock?  Fleer was very proud of this illustration.  And it makes you want to buy a hammock so you too can snooze like an All-Star.

Here are some other notable cards in this set: 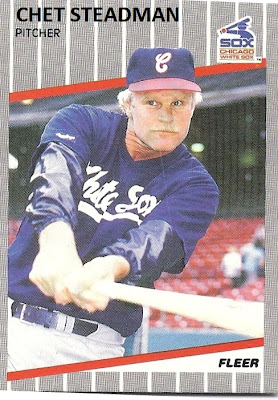 Here's Chet "Rocket" Steadman before he was traded to the Cubs where he, with the unlikely help of 12-year-old pitching phenom Henry Rowengartner, brought the Cubbies to the World Series.  And I think they won (he had the ring at the end, so I can only assume).  1993 was a hell of a year for baseball, and for cheese-related pitching.

I'm kidding - I made this image in MS Paint.  That's actually Jerry Reuss, who really is a pitcher.  I love cards that feature pitchers batting, especially pitchers that look like Busey. 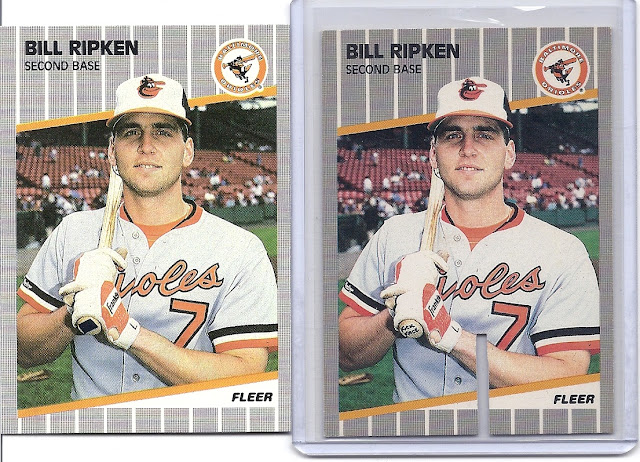 These are different results of the printing of this card: 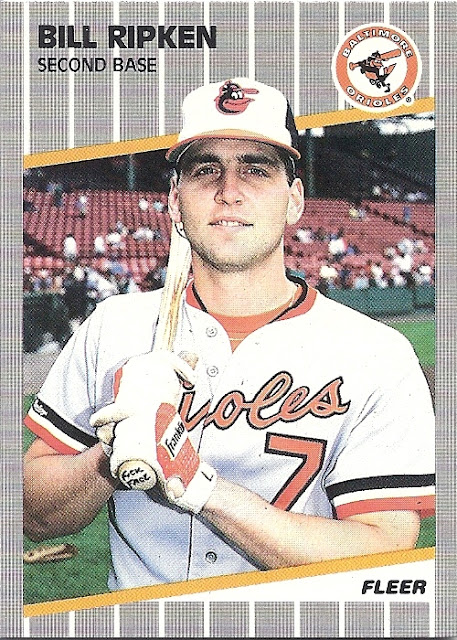 Which, if you have been collecting baseball cards for any amount of time, you already knew about.  Possibly the greatest error card in history.  Funny that he plays second base as what his bat describes is closer to 3rd. Here’s the most recent dirt on the Billy Ripken "Rick Face" bat fiasco.

And here’s a few more cards with accidental curse words on them just for fun:

Let's get back to Griffey. 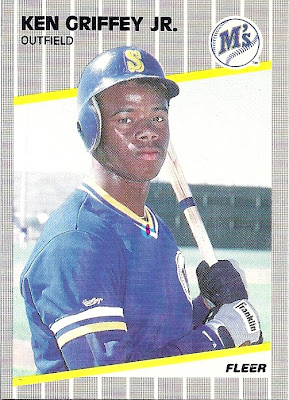 The Kid looks sweaty, brah.  This is bar none his sweatiest card.  It shows Griffey "the hard worker" which while a great message for the kiddies is less attractive visually.  Like, he was running wind sprints in long sleeves, mind you, fully embatted, begloved, and behelmeted, and the Fleer guy was like, “Junior, hold up for a m- <camera snaps> Thanks!”  Boom, picture taken, Fleer guy out.  Maybe it was right before lunch - the sun does appear rather high in the sky….

The sweatiness of the Kid combined with the glossiness of the Collector's Edition set make for a very shiny card indeed.  I have to squint sometimes when I behold this card on a sunny day.  The above picture is a scan of the regular edition (see the sweet pink discoloration?).  If I were to scan the glossy version it would melt my computer.

In closing, this is another unsung rookie card.  No pictures of little trophies, nobody "rated" him, the card number is high and meaningless.  It's a collector's rookie card.  You can get this card in a PSA 8 on eBay right now for $23.00, and the regular edition goes for less than $5.
You can only imagine the depraved things Ron Kittle had written on his bat.....
Posted by The Junior Junkie at 11:02 AM