The OTHER Donruss Rookies

The OTHER Donruss Rookies: Baseball's Best #192 & The Rookies #3 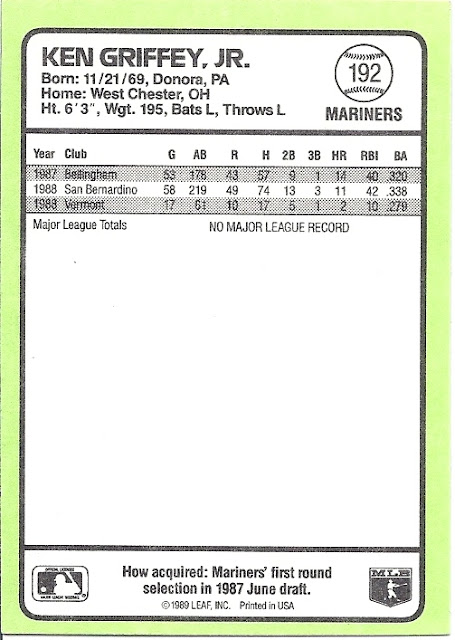 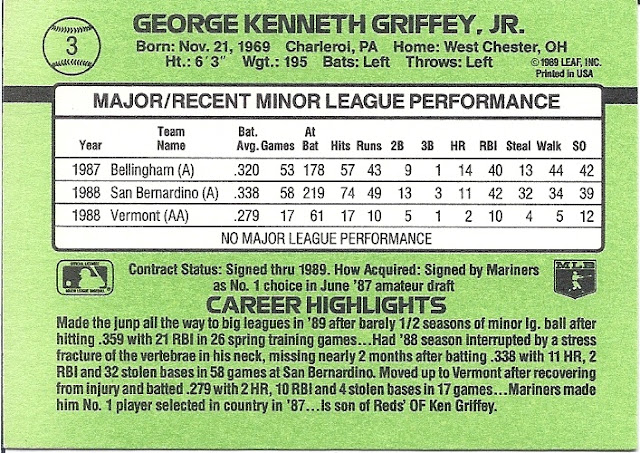 In my collection: 1 Baseball's Best, 2 The Rookies

Griffey looks: better than he did on his regular Donruss rookie

Are these good Griffey cards?: Yes.  They are significantly rarer than their regular set counterpart.  Also, both cards show Griffey's minor league records while the regular version shows nada.  And both have much better pictures of the Kid.

The sets: The Baseball's Best set is a 336-card factory-exclusive set sold specially through mass-market retailers such as K-mart.  This set contained the first major Sammy Sosa card as well as a Randy Johnson card.

Being that they were all stars among rookies, I suppose it made some sense to include them among "Baseball's Best," but really I think it was just Donruss telling Topps, "Look, we already have 3 Griffey cards out and you only have one!  Ha!  We'll print anything!  In yo' face, Topps!"  Didn't really work out in the end for Donruss, but at least we have these cool albeit unnecessary cards.

All the cards in this set are green, even those for the Reds, Blue Jays, and both color Sox.  Yes, that is weird.

The Rookies set also stuck with green.  There are 56 cards in this set, including Omar Vizquel, the Big Unit, Kenny Rogers, Edgar Martinez, Jefferies, Sheffield and Neon Deion.  Having just re-read what I typed, now I want this set.  That's a solid rookie checklist right there.

We have minor league stats, verification of his successful jump to the bigs, glaring error on the time frame that wasn't there before, and they added "Is" to the last sentence which makes it seem more complete, but it's still not.  Also, the orange-green combo makes me feel like we're on a Nickelodeon game show from the 80's.

All in all the Rookies set makes sense, but Baseball's Best seems like a money-grab.  Except for the Sosa card, it has no real purpose in the collecting mix.  And the green-only is just silly.  Here's all 3:

See?  In both cases Griffey looks better than he did on his regular card.  It's crazy town, I tell ya.

The greenies are valued at ten bucks each.  And if you think these are too much of one color, wait til you see next year's Donruss set......
Posted by The Junior Junkie at 6:42 PM