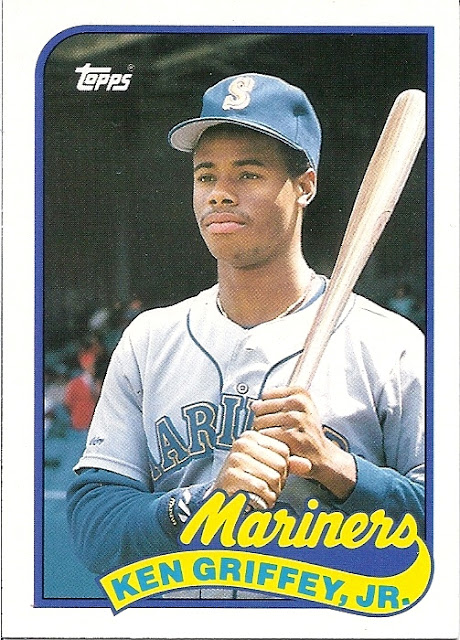 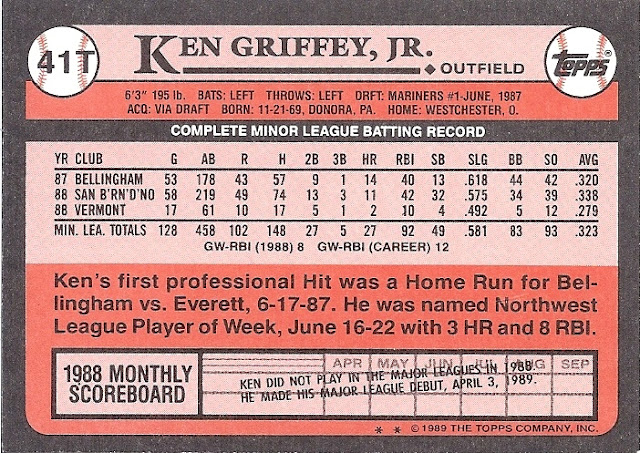 Is this a good Griffey card?: Yes.  His 1st Topps card - they finally got around to making the guy a rookie card.  Of course at this point he was already a star.  At least we finally got to see his name in the sweet ’89 Topps wave.

Quick note: I know all I've done is rookie cards so far, but that is what I know.  I stopped paying attention to the hobby from 1999 until pretty recently.  And while I have plenty of Griffey cards that have been printed since then, I assure you, eventually my posts are all going to read "This card has Ken Griffey, Jr. on it.  It is shiny.  Baseball."

The set: The 1989 Topps set is a behemoth at 792 cards.  The traded set of 132 cards came out later in the year to showcase rookies and the players that switched teams.  In other sets and years you may see “update” and “series 2,” sets that account for these late-season changes.  You’ll even see two cards for the same player in the same year because of sets like this.  Check it:

A prominent feature of the traded set compared to the regular is that the traded set was printed on white card stock instead of brown.  This made the back look much cleaner: 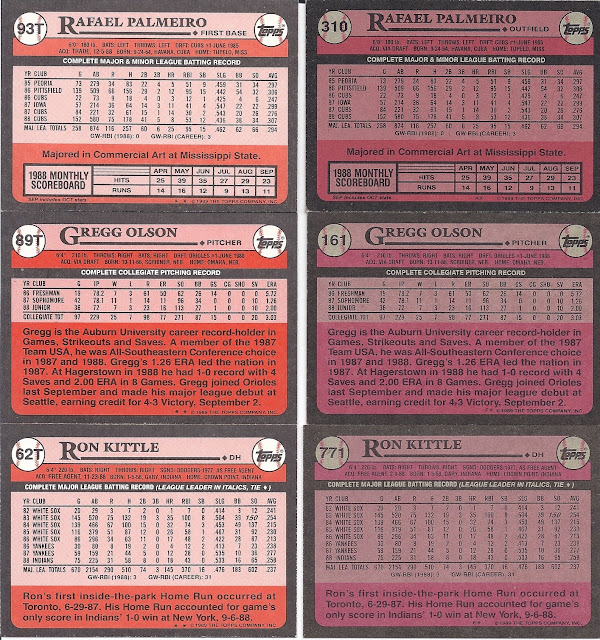 So, there you have the regular set and the traded set, but there’s also the Tiffany set and the Tiffany traded set.  Tiffany cards came in a lovely blue box and were printed in more limited numbers on white card stock with high-gloss fronts.  Since the traded set is also printed on white stock, these cards can be easily mistaken for Tiffany.

Keep in mind that the high-gloss front is unmistakable, so if you’re not sure whether what you have is a Tiffany, it’s probably not.  I bought a whole collection on eBay once that claimed to contain all the Tiffany rookies.  It did, except for this one, despite the post-it note attached to the case that said “Tiffany.”  It was the seller’s mistake, but I got such a ridiculous deal on it at the time that I didn’t fuss.  This remains one of the only rookie specimens I don’t have in my collection.  Anyone want to trade?

Here’s some great cards from 1989 Topps regular and traded: 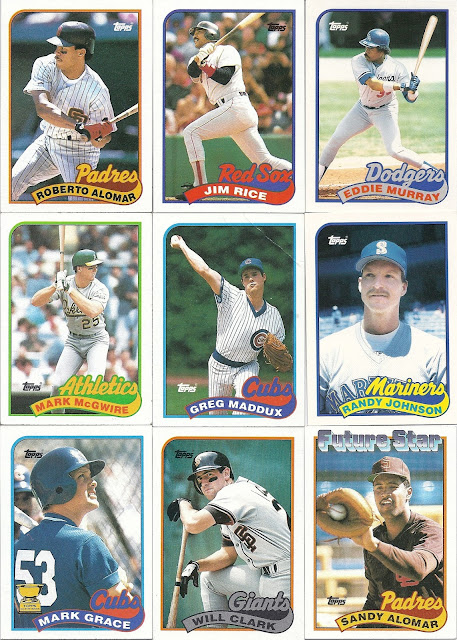 Also, some sweet All-Star cards with bright primary colors for the kids (I still love these things):

And here’s some “Uncollectables” from Topps that year:

And now to the Griffey: 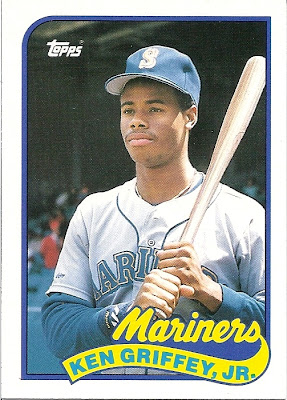 Griffey looks ready.  Ready to rock some major league socks.  See the squint?  That’s fury.  That’s focus.  That’s the naïve fearlessness of the rookie contender.  The Kid had a tough 1988.  But right now?  Right NOW, this dude is about to play some f***ing baseball all over your face.  BOOSH.

In closing, the ’89 Topps Traded is another favorite all-time rookie card.  You can snag one for less than $5 on eBay.  The whole Tiffany Traded set will run you almost the same amount as the Griffey by itself, so you might as well get the whole thing and keep the rookies and the Nolan Ryan as bonuses.
Posted by The Junior Junkie at 10:26 PM