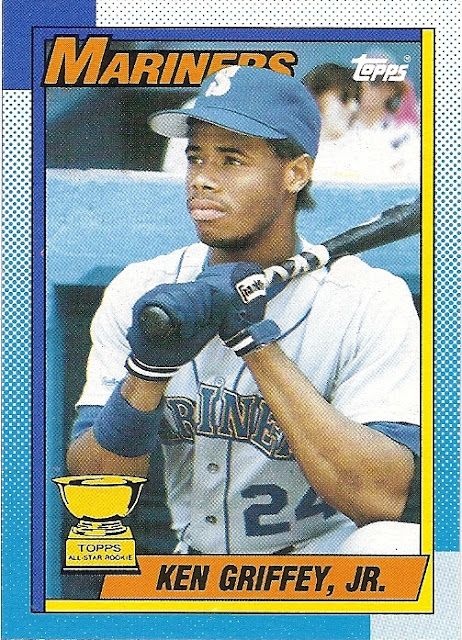 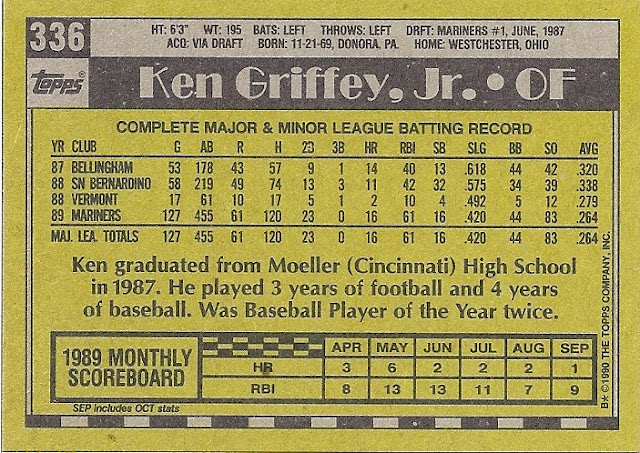 Is this a good Griffey card?: Yes.  A widely available 2nd year card featuring a young Griffey on the brink of super-stardom.  And with all those colors the Tiffany version really pops.

The set: This set was clearly designed under the influence of amphetamines.  It’s just so dynamic and exciting and retina-fryingly colorful (check out my new adverb).  1990 Topps is to every other Topps design what Joey Buttafuoco pants are to regular pants.

Here's the back of the Tiffany vs. the regular: 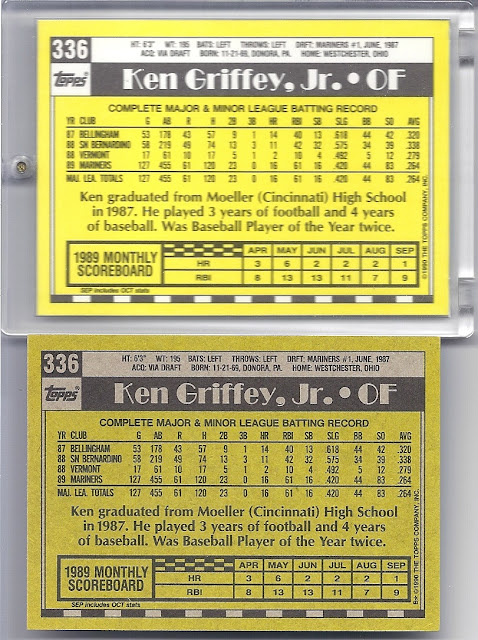 And here's the regular back vs. the Canadian version:

The Canadian card looks to be printed on a lighter paper stock, which I like.

Topps stuck with the massive card count of 792.  Why this number?  The set is printed on 6 sheets lettered A-F.  So, 6 sheets that total 792 cards = 132 cards per sheet, the exact number in the Traded sets.  Hence, one traded set per sheet.  Isn’t that neat?

Funny story: halfway through the run, the workers at the Topps printing facility who printed/inspected sheet F (the 6th of 6 sheets printed to make the set) got so keyed up on Surge energy drink and Hypercolor t-shirts that they decided if you didn’t know the name of the guy on the card then you’re not a real fan, and you can suck it - we're done putting names on the cards.  It's too easy....

Eventually the sober day shift guys came back on and put a stop to that, but a few sheets got through into the market with no player names printed on the cards, including <oops!> arguably the best card from the regular set.  Here it is, direct from sheet F (for fail), the Holy Grail of Frank Thomas rookie cards:

Here’s some cards from the set: 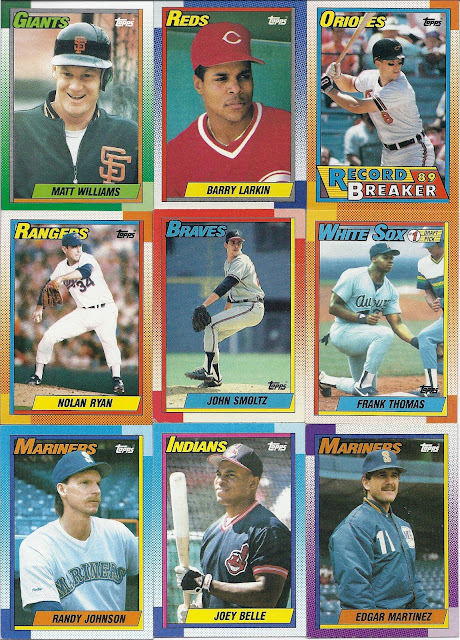 There's also some pretty solid rookies from this year, including Bernie Williams, Larry Walker, Juan Gon, the Big Hurt, and the Bidge.

Have $7000 and a fierce, unyielding patriotism?

Here’s a fun trivia question: what strikeout milestone did Nolan Ryan hit in 1990?

And, of course, some herp-derps: Now, to the Griffey: 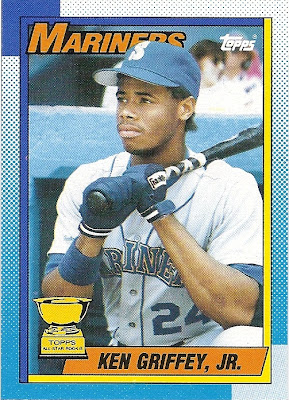 Griffey is threatening to hit the crap out of something with that bat.  Look how he’s holding it.  I’m thinking he’s in the hole at this point, about to be on deck.  The pitcher is probably pissing his pinstripes at the sight of this All-Star Rookie just frickin’ eyeing him down something fierce.  Think The Waterboy when he got real angry, like a tearful rage, already full of regret for the harm about to be caused at his hands but utterly out of his control.  Something is about to happen.  I hope one of those other batters was on base when it did.

Now, we need to talk about that little trophy.  In 1990, Griffey is very much still a rookie in every sense of the word.  No arguments there.  He’s even an All-Star Rookie, and frankly, deserving of a trophy.  I get that, but that trophy on this card is misleading.  And this card is not the last time Topps would pull said stunt.

We all know a kid (or adult, God help him) who is so proud of their Griffey rookie card that they’re just dying to show it to you.  “Oh, you collect baseball cards?” they ask you, “Well check this baby out….” Then when they show it to you, you just don’t have it in your heart to tell them,

”Well, technically (Not technically. Actually.), his rookie year was the year before this, so while he is still a rookie at this point, the card is not a rookie per se.  But nice card, bro!  Here’s a penny sleeve for it.”

Or, you can get mean:

“Oh my God.  You stupid idiot.  This is his second-year card.  I can’t believe how dumb you are.  Wasting my valuable pack-ripping time looking at a card I have 30 of at home.  Look at you - you don’t even keep it in a top loader.  Edges all frayed, and did you fold this in half?  AND write a dollar sign on it in sharpie?  You’re sick, dude, you know that?  You know, I wipe my ass with this card.  This and your Darryl Strawberry and your Ron Kittle and your completely worthless ’91 Score Billy Ripken.  Yeah, I know he’s Cal’s brother – that means nothing.  Your collection is a joke, and your life is pointless and devoid of value, just like your stupid cards.  Die in a fire.”

For the record, I like the Ripkens, and have many Darryl Strawberry cards.  And Ron Kittle?  Well, let’s just say he’s alright with me.

Here's the traded card from that same year: 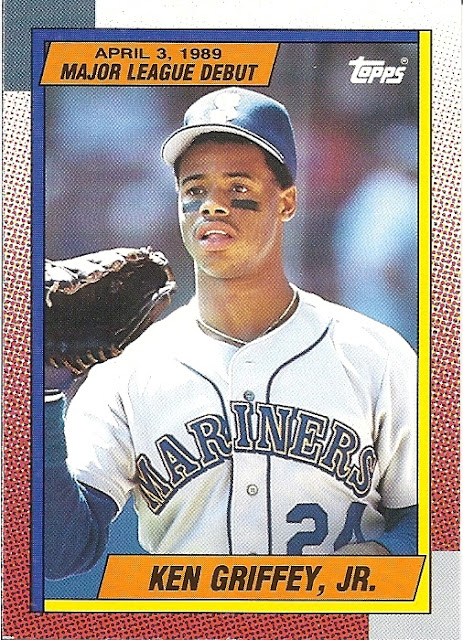 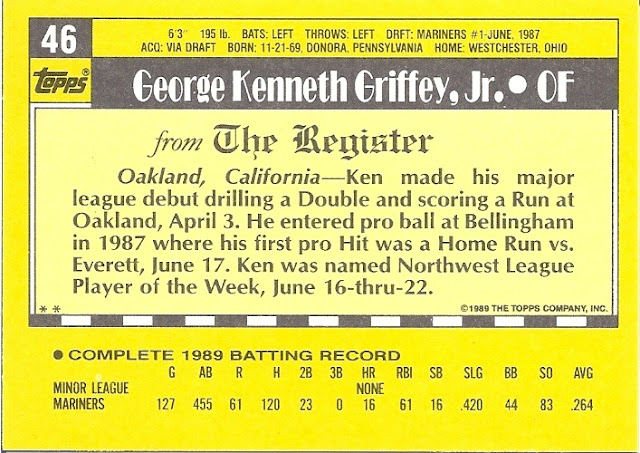 Griffey looks easy-breezy, playing some warm-up catch before a game.  The Tiffany looks exactly like this as it is printed on the same paper, but with a glossy front.

All these cards are hella cheap.  Go get 'em.
Posted by The Junior Junkie at 12:03 AM