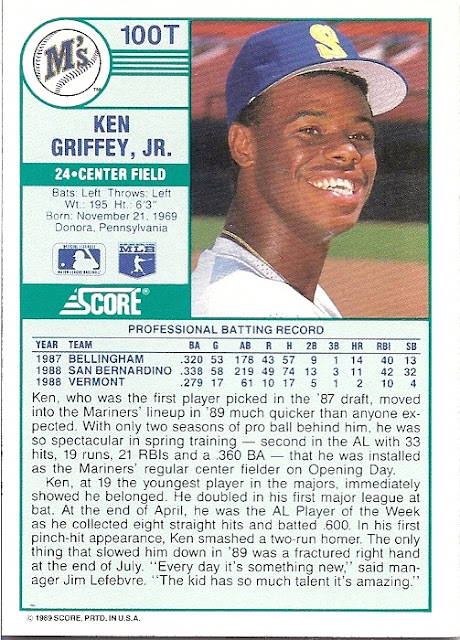 In my collection: 2 Traded, one Young Superstar

Griffey looks: about to run

Is this a good Griffey card?: Yes.  Here is Junior's first Score card, and it it the first of his cards to designate him as a center fielder and not an outfielder.  This card is not as easy to come by as many of his other '89 cards and under-appreciated as his rookie cards go.

The set: As much as I hate admitting it, '89 Score was pretty forgettable.  I looked through my binders for other players I could post cards of from this set and found none.  NONE.  My binders are huge, too.

I think it's the front.  Not very much going on.  Not dynamic, bold or unique.  And it's a shame, because look: color photography on the back!  Upper Deck was the only other company doing that, and their set from '89 is lauded as one of the most important ever made.

On the back you've got a nice big block of blurb, all his minor league stats, vitals, a great color photo that rivals many of his other rookie card photos.  The layout doesn't come across as clunky or claustrophobic.  It's actually very feng shui.

Admit it: this card is great.

Not crazy about the teal/pink/magenta on the front; but remember, it's the late 80's.  I bet you had some funky Jordache and Esprit shirts in your closet at the time.

Let's look again:
﻿ ﻿﻿﻿
﻿﻿﻿﻿It looks like Griffey just smashed a looper into right-center field and is about to run.  You can see the blurry on-deck batter watching it fly.  Go, Junior, go!

Score also made two Young Superstar sets of 42 players each. 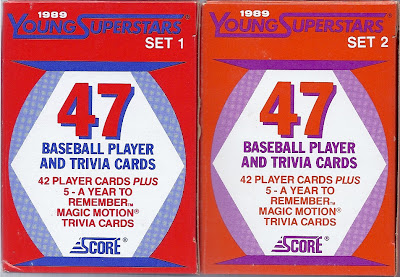 I know it says 47, but that is because they include these: 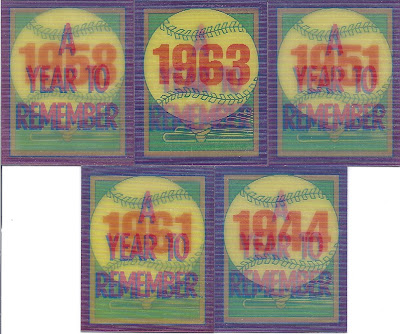 Little cards with lenticular fronts that don't show the awesome things described on the back, but instead transition between "A Year to Remember" and a baseball showing the year the thing happened. Had there been a picture of the event described, these would be very cool and highly collectible.  But instead, they are kind of lame and easy to forget.

Enough of these - let's get to the players:

These cards have glossy fronts and some solid action photography.  And that's my favorite Biggio RC other than the '88 Fleer. 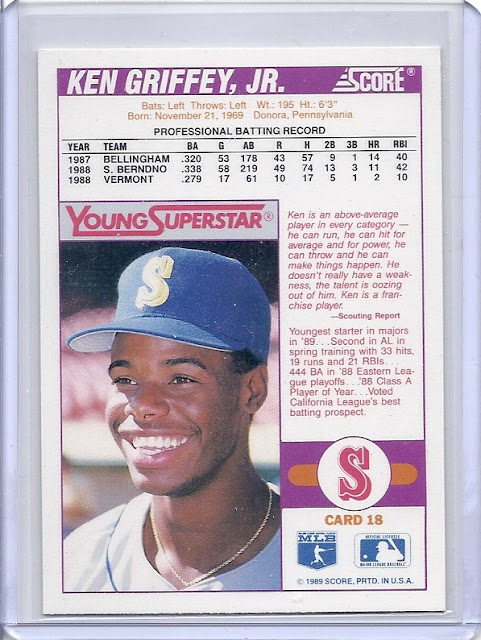 On the front you have the follow-through, a ball having just popped off the bat.  On the back, a direct quote from his scouting report.  That is cool.  And another great picture of the Kid.

Score did a great job in '89, a fact I completely forgot until I wrote this post.

The regular card can be got for less that 5 bucks.  The Young Superstar card, while valued much higher, you can get for under ten bucks.  For the same price as the single card was going on the Bay, I was able to get both complete sets and keep the Biggio, Sheffield and Maddux cards.  Good deal.
Posted by The Junior Junkie at 2:08 PM