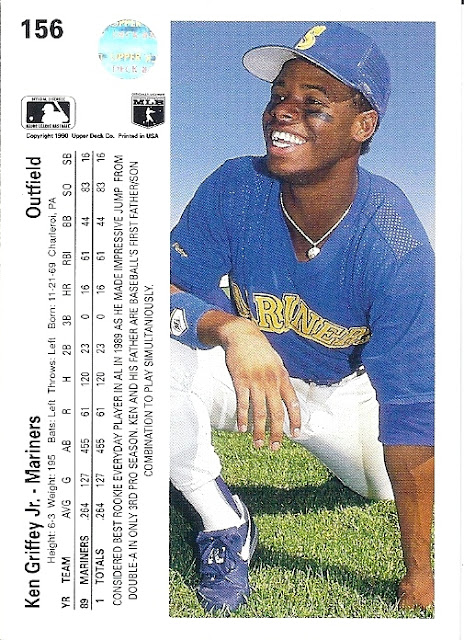 In my collection: 11 regular, 18 checklist
Griffey looks: amicable
Is this a good Griffey card?: Yes.  This is the Kid’s sophomore card in Upper Deck’s sophomore set.  Plus both pictures on the card are brimming with personality.
The Set: One thing I never noticed until just a few weeks ago is that 1989 Upper Deck depicts home plate and the first-base line along the right edge.  The 1990 design includes the first-to-second base line along the top.  Upper Deck is putting together an infield, one year at a time.  More on this when we get to 1991…..

1990 UD always seemed a little plain to me.  It’s certainly the plainest Upper Deck set that included a white border.  Maybe a slightly fancier font for the player name would have dressed it up and made the set more memorable. Moreover, to maintain the faithfulness to the baseline theme, the vertical design is used for every card, even those with horizontal photos.  Take a look at the Wade Boggs quadruple exposure from that year.  How awkward is that?   An awesome card ruined by a silly design decision.
All in all, I don't hate this set.  I cannot complain about Upper Deck’s photography and overall quality, but this design is a bit of a snoozer.  That's hard to admit as the simpler Upper Deck designs tend to be my favorites, but this one is a little too scant even for me.  Had I been a kid opening a pack in 1990 after Upper Deck’s whirlwind introductory year, I would have been disappointed. 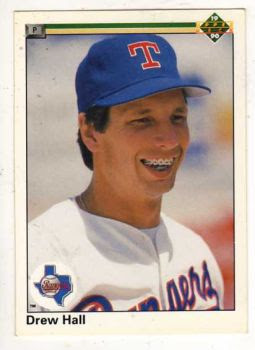 Drew's $74,000 contract with the Rangers finally gave him the scratch to fix that snaggly molar.  Sure, he's all braced up, but check him out, all happy and proud.  You go, Drew Hall!

I bought that Drew Hall card on eBay for $1.00 and never received it.  By the time I realized this it was too late to do anything.  Still plan on picking one up one of these days.... 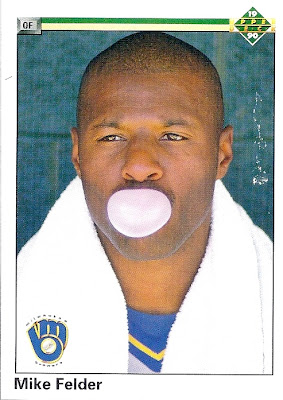 Who doesn't like Bubblicious?  Or possibly Hubba Bubba.  I'd have to smell it to be sure.

How can you not pull for this guy?  He just looks so damn amicable.  Hey, Griff, let’s go grab some brewskis and talk about women.  I know, they crazy, right?
It’s 1990.  There’s no way to know for sure what he’s laughing about, but here’s a few educated guesses:

Don’t look at me like you never made heat boobies. 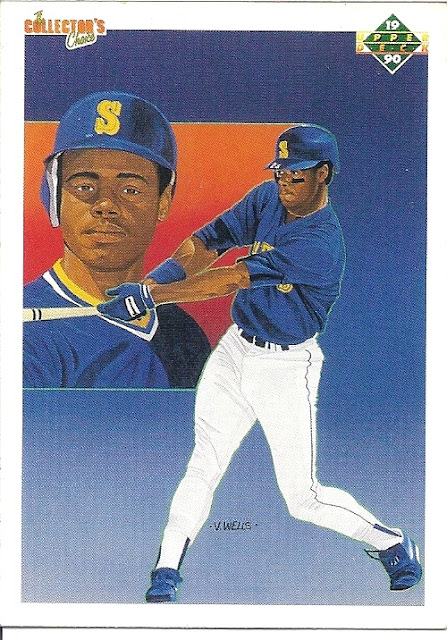 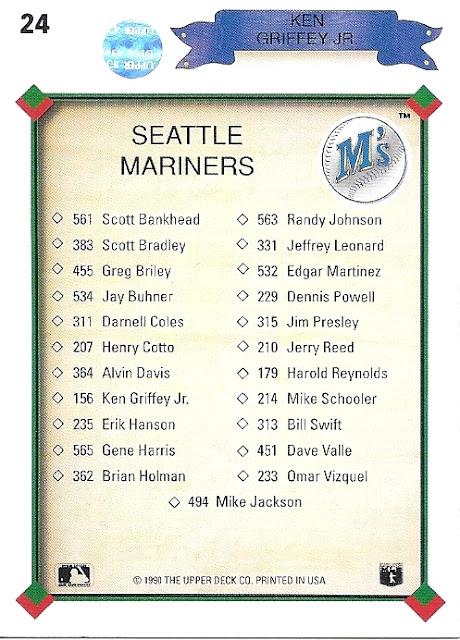 Upper Deck carried these over from the ’89 set - their version of Diamond Kings, but they are also team checklists and pretty desirable as far as cards in that vein go.  No trippy backgrounds or disproportionate facial features – just a realistic portrait and an action shot.  Mr. Wells paints classy.

For more on Vernon Wells, Sr., the Upper Deck artist-in-residence, this is a great read.

We haven't done Topps Griffey card in a while.  I feel a Topps post coming soon.  Goodnight!
Posted by The Junior Junkie at 11:16 PM