Willie You Can Drive My Car: Five Cards from 2006 Upper Deck

Willie You Can Drive My Car: Five Cards from 2006 Upper Deck

Is this a good Griffey card?: Yes.  Upper Deck liked to use unconventional shots of Junior for his base set cards, and this is one of the greatest ever simply for his company in the photo.

The set: 2006 was one of the cleaner, less intrusive designs UD used in the 2000's.  This type of aesthetic shifts the focus from the design to the photography which was still very good in 2006.  Also, Upper Deck was still able to use the real team logo on their cards in '06 which helps.....

So, in case you couldn't tell (I don't blame you - I had to look it up), that guy in the club car is hall-of-famer Willie "Big Mac" McCovey.  That looks like Petco Park in San Diego in the backdrop.


McCovey played 1st base for the Giants, spent a few years with the Padres, then finished with the Giants having hit 521 homeruns in his 22-year career.

Griffey looks a little star struck to be meeting not just one of his heroes, but a man who played for a very long time with probably his biggest hero, Willie Mays.  When this picture was taken, Griffey was on the verge of surpassing McCovey on the all-time HR list.

He did it in July 2005 and finished the season with 35 dingers for the Reds, having statistically what had been his best year yet with Cincinnati.  He also surpassed Mickey Mantle that same year. 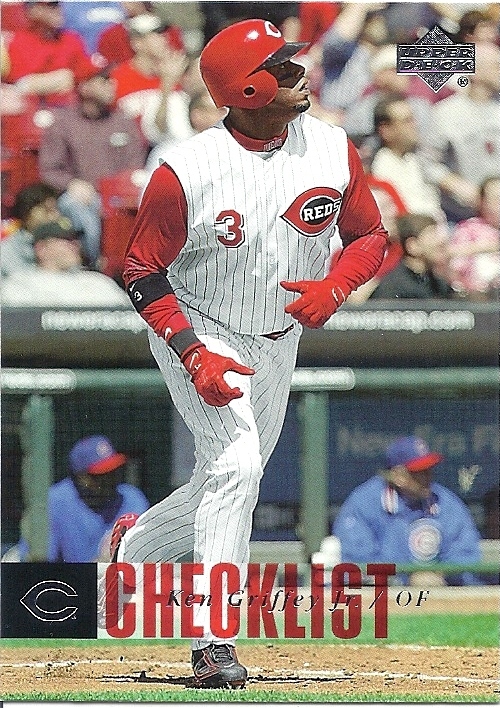 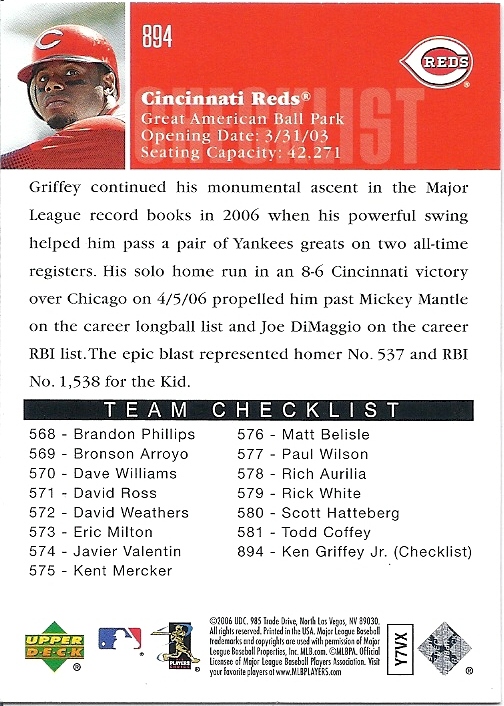 This is one of the greatest checklists ever made, and I know something about checklists because I don't throw anything away.

Checklists used to be hella boring.  They tended to be scant, plain dealios with nothing but a list of numbers and names and blank boxes for checking.  If you pulled one, it was a rip-off because of what that card otherwise might have been - Ripken, Ozzie (Smith, not Canseco), Ron Kittle, Chuck Finley, or.......God forbid...... you know what?  I wont even say it.  I'm getting upset.

I mean, I can see how they may have been needed in the past when there were more set builders in the hobby and people needed checklists to see who they were missing or to help assemble teams, but slap a player on there, man!  Maybe a photo, make it a team sticker, something.  Throw me a bone.

But no temporary tattoos.  Those are less than worthless.

I don't know exactly when they first started putting players on checklists, but that changed the whole game.  Suddenly you felt like, "Well, at least I feel like I pulled something."

I remember seeing illustrations of players on team checklists in '89 Upper Deck, then faded player photos hidden in the background of checklists in 1991 Ultra and 1993 Upper Deck (who went ahead and put the player name right there on the card).  I believe 1993 Leaf split the card down the middle, putting a photo of Carlos Baerga or someone on one side and the checklist on the other.

Anyhoo, over the years they evolved into desireable cards.  They come with multipliers and in parallel sets, they feature some cool photography, and some of them are even listed cards.

I feel like the checklist above is one of the greats, a culmination of all the progress checklists have made in the last few decades.  Great, full-color photography on both sides, an excellent blurb, great ballpark information, and more of a team roster than a "checklist."  Just a great card all-around.

Now that I think about it, perhaps it's time for a checklist post.  Gears are turning....  And if there's anyone you know who collects checklists, I have a brick of them I have no desire to hold onto. 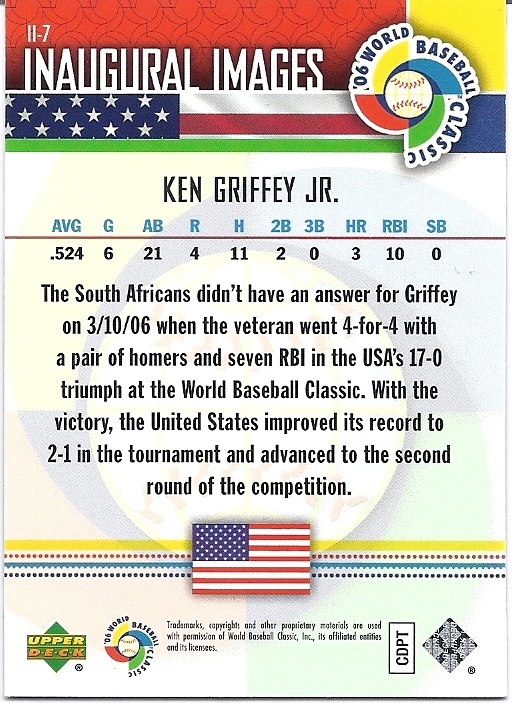 The U.S. would be eliminated in Round 2 with losses to South Korea, Mexico, and eventual champions Japan.  That's what we get for running up the score, I guess.

Diggin' that uniform, though.  Very Olympical. 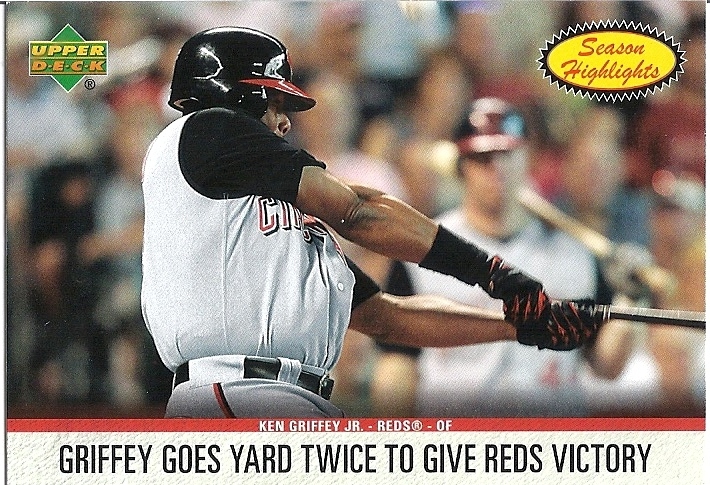 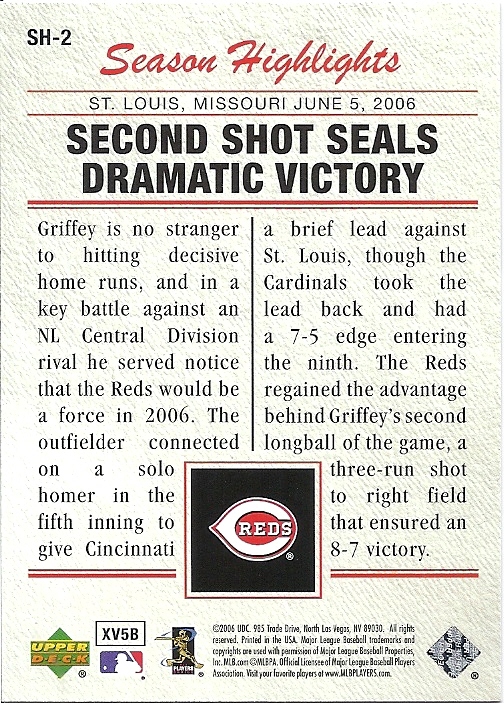 THAT is a highlight, my friend.  Two clutch come-from-behind homeruns in one game against division rivals.  You gotta love a healthy Griffey.  And is that a blurry Adam Dunn on deck?

The back of this card is assembled in the newspaper style which we've seen before and which I like, but the front is very unique - see why?  It shows an action shot of the patented Griffey swing in mid-stroke, but from the back.

You hardly ever see that angle - and it is good.  No bulging, performance-enhanced biceps - just a natural and his bat, kicking some Cardinal ass all over the field and in their own house (no offense - I like the Cards). 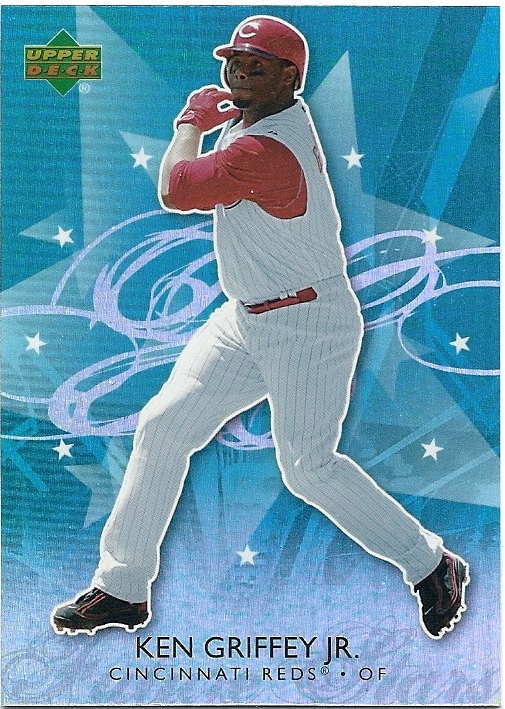 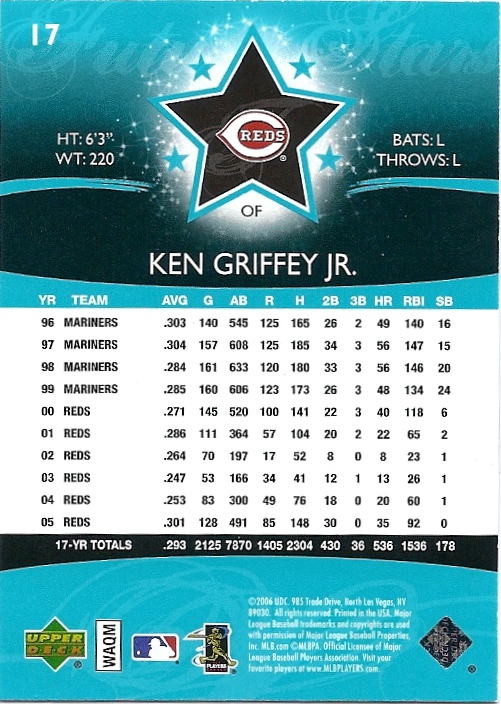 This is Griffey's "Future Stars" card.  Because after 17 years, 1500 RBI and 500 homeruns, I'm starting to think that this guy might have a future in baseball.

It is shiny and refractory, and it comes in other colors (green and purple, I think), limited and serial-numbered for your drooling pleasure.  This is the only color I have, and I guess I do kinda want them all.

But for the record, it should have been call "Current Huge Stars."

I am leaving you now and walking down the street to St. Charles Avenue where the Krewes of Babylon, Muses and Chaos and about to roll.  They will throw many beads, I will drink many beers and jello shots.  Wish me luck, baseball card people!

And Happy Mardi Gras!!!
Posted by The Junior Junkie at 5:06 PM