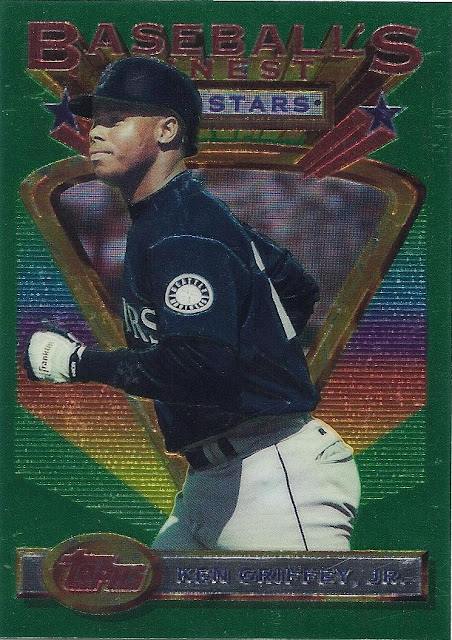 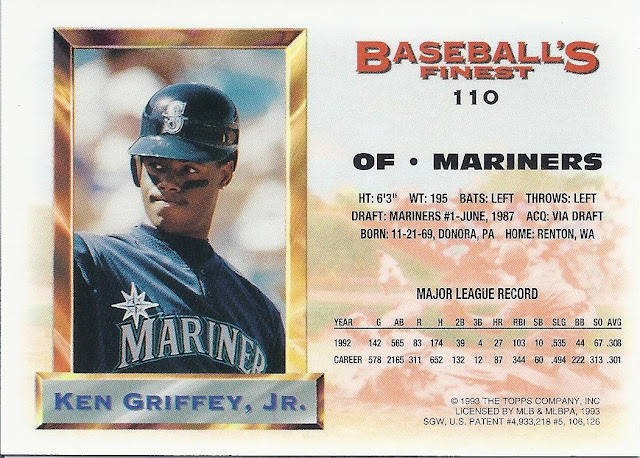 
Is this a good Griffey card? Yes.  The first ever chrome card and the first ever refractor, colorful and tech-forward, famously rare and sought after, freakin' expensive and frustrating.
﻿﻿﻿﻿﻿﻿

﻿The set: In the early 90's James Esker invented chromium printing technology which gave rise to the Finest Chrome Process by which cards could be manufactured to look super tight, brah.  Topps ran with it and made this set of 199 cards.  According to baseballcardpedia.com, roughly 30,000 of each card were produced with refractor versions limited to about 241 of each card.  It also mentioned the possibility of short prints, but I don't even want to think about that nonsense.

The result was a very high-demand set with ridiculous prices.  The MSRP was $3.99 a pack, but they quickly started fetching upwards of $20 per pack, and there they remain.  The refractors were 1 per box, and there are also jumbos which I have never seen but totally want.
﻿
﻿The set was divided into regular cards and the All-Star Subset with no player repeated between sets.  I don't have any regular-issue cards to scan, but on the right is one I pulled from the Interwebz for your eyes to look at.

﻿﻿
One interesting effect of this set is that it gives every player collector a Holy Grail, no matter how unknown the guy was.  For many players in the set, 1993 Finest Refractor is their ultimate card, almost certainly their rarest and most expensive one.  Most of them had rookies made in the overproduction era that were not expensive, so their refractors from this set are the tip of the glacier, the most you could ever expect to spend on one of their cards.

Once you land it, you're done.  You got the hardest card.  Nice job.  It eventually became a different story for many of the stars as super limited-run inserts, triple relics, autograph cards, super-refrsctors, printing plates and 1/1's started popping up.

And no, I don't have the refractor for Griffey.  ﻿﻿When I was a kid, I considered it ungettable.  Not like Holy Grail ungettable, because even that has higher perceived gettability than this card.  I mean, this is the card that made me stop collecting Griffeys.

Yeah, you heard me.  When I was a kid I got this magazine with a huge checklist of all the Griffeys ever made up to that point.


And there, bottom right, staring me in the face, a single box, unchecked evermore.

There I was, a 14-year-old kid joyfully amassing all the Griffeys ever comitted to cardboard, then I learned that this one existed and I thought "Psh.  Never-freakin'-mind."  What was the point?  It was like the first time I ever really listened to "Bohemian Rhapsody" (Wayne's World soundtrack, via Walkman, on cassette in my parent's living room - never forget).  This thing called "depression" was altogether new to me, and I didn't like it.

There it is, good ol' #110.  I snagged these pictures online as well.  This guy captured the refractor effect beautifully.  Did I mention how shiny the Kid looks?  Even on the regular-issue card it must have been amazing to behold this set for the first time.

I'm intensely ambivalent towards this card.  It's so cool and scarce and awesome, but it is also a symbol of what made me leave the hobby.  You can no longer, through sheer will, effort, trading and moderate expense, collect everything from a modern set.  I say modern meaning a set still being produced wherein there is scarcity by design; not one that was made in 1952 that is scarce due to the effects of time and happenstance.

1993 Finest gave us Griffey collectors the ultimate tease, the biggest carrot on the longest pole, the first card that perfectly satirizes the entire hobby card industry.  At once a great reward and a cruel joke.

Now, 20 years later, I'm getting older and less and less wise, and I'm learning to say, "Screw it - I'll enjoy the Griffeys I can get through reasonable, defensible effort."  Hence this blog.

One of my favorite blogs The Cardboard Examiner is just starting a card-by-card expose of this storied set.  This guy's got information and tends to be a great read.  And apparently he's got the whole set which makes me super jelly.  Check him out.

﻿Also, at the risk of coming across really dorky, I quoted a song lyric written by the great Stephin Merritt somewhere in this post.  First person to spot it gets a free baseball card of coolness.  Good luck!
Posted by The Junior Junkie at 12:59 AM