In an effort to shorten the title of today’s post, I decided to abbreve the name of Brian’s blog, Highly Subjective and Completely Arbitrary, which, while known to many as a symbol of quality card blogging and excellent trade fodder, has almost as many letters as this sentence has commas.

That is not to disparage what the man sent. Heavens, no: 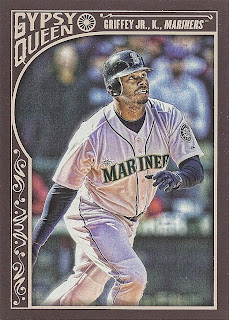 This was my first 2015 Gypsy Queen Griffey, and it’s a damn nice card. I really like the design – at least I think I do. It may just be that it’s so different from previous years that it’s refreshing to see a new look. Plus it’s brown. I like brown.

I tried to pull this card myself by buying a few packs when it first came out, but had no luck. Actually, I have a pretty hefty stack of base cards for this set if anyone is building it… 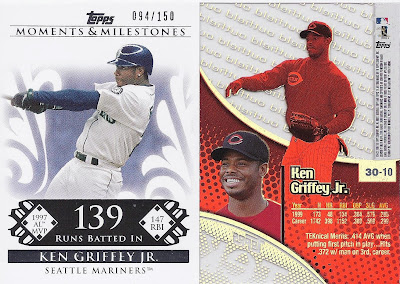 When I first learned what Topps Tek was I was all like, “Psh – parallel town. No, thank you, JACK.” But over the past few years I’ve slowly been won over by this evil, evil little set. I’m even pretty close to completing the checklist of patterns. Moments and Milestones on the other hand will probably never win me over, but that doesn’t mean I appreciate them any less. Sure, they confuse the balls out of me, but check out this Griffey numbered out of only 150! Woo-hoo! 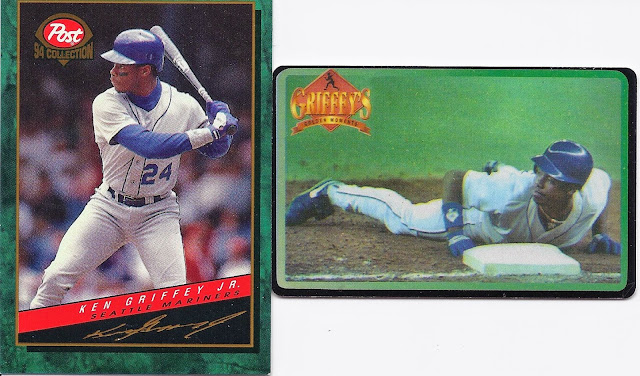 These Griffey’s Golden Moments cards give me mixed feelings. First, they have solid photography, and being plastic they are difficult to damage – two nice attributes. My issue with them is that they were sold one card at a time in little plastic wrappers. While most I come across are loose like this one, some are still sealed in the wrapper. I have the complete set of five, but I have it in mixed formats. In cases like this I have the propensity to want one of each, a set still in wrappers and a loose set. Should I consider the set complete or wait until I have all the sealed versions? Or both versions? Am I being anal? 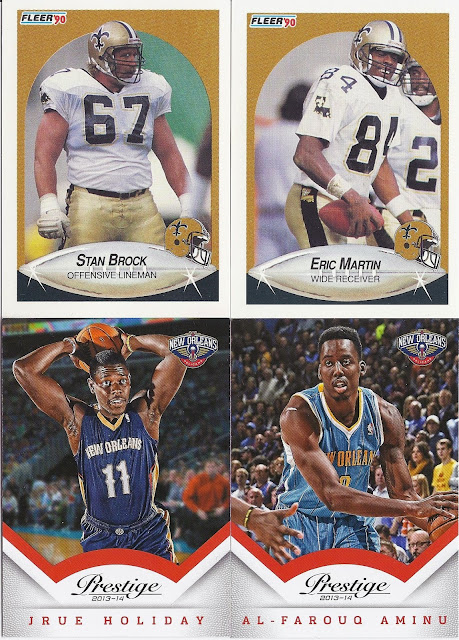 And here are a few New Orleans teams for good measure. I honestly had not idea Jrue Holiday spelled his name like that until I saw this card despite having heard his name a hundred times before (mostly on local talk radio). This seems like the kind of thing that should annoy me (misspellings for the sake of misspellings), but I kind of like it. It’s fun with phonetics. Good on you, Jrue.

Thanks, for the cards Brian! All these great new Griffeys had me jrooling.
Posted by The Junior Junkie at 1:00 PM