How the Griffeys of 1997 Upper Deck Changed Everything Part 1: The Base Set

I’ve waited a long time to do a write-up of this groundbreaking set, and after months of searching and great expense I finally got everything I need to do it. Turns out it would have made for one really long post, so instead here are two normal-sized ones. Enjoy! 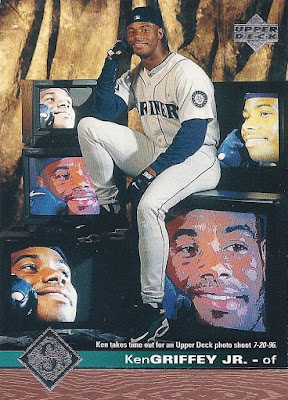 There were a lot of neat innovations happening in the card industry in the mid-90’s, but few brands were as forward-thinking as 1997 Upper Deck. This set sits among my favorite base sets of the 90’s and features a simple design of full-bleed photos with a bottom-mounted nameplate featuring a stamped foil team logo, a tinge of team color in the name field, and some great wood texturing in bronze foil.

This was also the last of four consecutive sets to feature that bronze foil that ruled the Upper Deck flagship sets of the middle-90’s; and though they were bronze, I consider them the golden age of Upper Deck design. Of those four sets, ’95 had the best aesthetic, ’94 had the best photography, ’97 had the best innovation, and ’96 had the best…worstness? Is that a word? Anyway, ’96 was the worst of those four, and it’s still an above-average set.

So, yeah. Innovations. There are four major ones in ’97 Upper Deck.

The most obvious and polarizing of those was the inclusion of text above the name plate that dated and put into context the photo on the card. I call it polarizing because I’ve heard equal parts praise and condemnation for the captions. Personally, I love them. We get some context and it practically guarantees an original photo every time. I think the biggest complaint is that it takes you out of the card in the same way giant on-screen promos for other TV shows take you out of the show you’re watching.


Maybe if UD had put it on the card back there would be more love. The haters should be happy, though, as this has never been done again since (apart from the occasional insert or subset).

So that innovation didn’t stick. Here’s one that did: the ’97 UD base set contains the first ever short-printed base cards in the form of the Griffey’s Hot List subset. This is a concept that is more prolific now than ever before much to the delight and/or dismay of collectors, depending on who you talk to. They’re not variations like most of the SP’s we see today – just a subset of base cards that are a little harder to come across.

There are two other innovations from ’97 Upper Deck, one of which hung around for a few years then disappeared and another that changed the hobby forever. Some of you probably already know what the latter is. Before we get to those, let’s look at some other fun cards from ’97 Upper Deck:


Look! Jackie Robinson base cards! Some of the first base cards that were tributes to retired players that I can remember came when Topps started giving card #7 to the Mick in 1996. The very next year Upper Deck jumped aboard the tribute train with this excellent 10-card subset made up of shiny, full-bleed sepia photos in a layout similar to their ’95 base set.


The pitchers-only Strike Force subset is pretty darn cool, but that shot of Hideo batting is better.


These are not base cards, but I gotta sneak ‘em in somewhere. I used to get so excited pulling Rock Solid Foundations inserts from packs. Something about the stately design and black border/refractor combo made these cards feel so rich. The checklist was an absolute beast, too, including the likes of Chipper, A-Rod, Ordonez, Delgado, Pettitte, Manny, Pudge, Pedro, Mondesi, Damon, Jeter, and Junior Junkie PC Javy Lopez. Just a cool 90’s insert with very few bad pulls.

Hey, who’s that sittin’ over there? 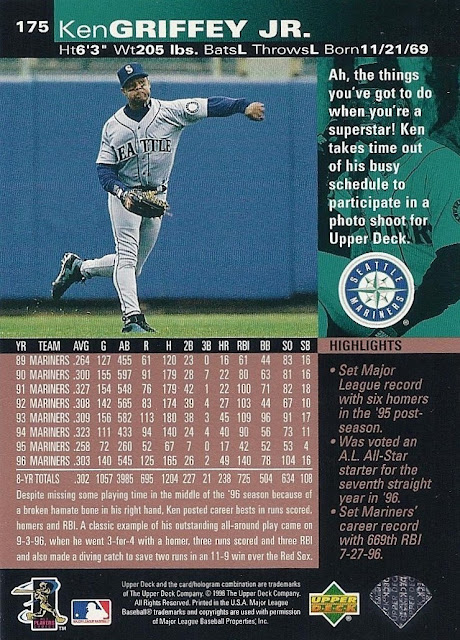 Griffey’s base card this year really puts the “dated” in “inundated with cathode ray tube dinosaurs.” I won’t lie – I still have one working CRT television that almost never gets used (I really only keep it in case I feel like playing some Duck Hunt on NES), but here are five of them. There’s got to be a thousand pounds of TV on this card. Regardless of that, the pose is great, the multi-angle camera views are fun and different, and the backwards cap is freakin’ flawless. This card has always been a favorite because there aren’t many cards like it, but looking back from 2015 I can’t help but chuckle a little at its 1997-ness. 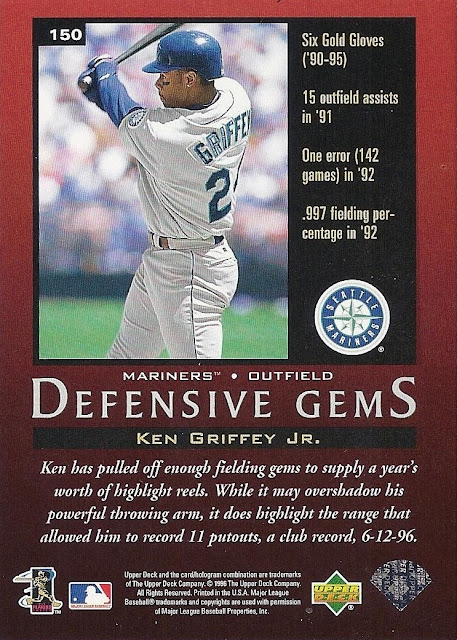 A defense-focused subset in that papery foil stuff, Defensive Gems is as run-of-the-mill as they come. The saving grace here is Junior’s great smiling throw, but a little design tweak here would have upped the ante significantly. 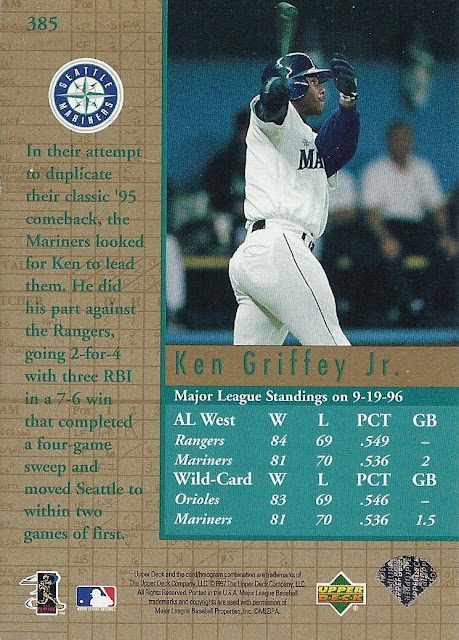 This subset, based on each player’s contribution to his team’s postseason performance at winning their respective pennants, is well-titled and attractive. I’m still not crazy about the papery foil, but in concert with the gold foil stamping in the logos, it’s not half bad. 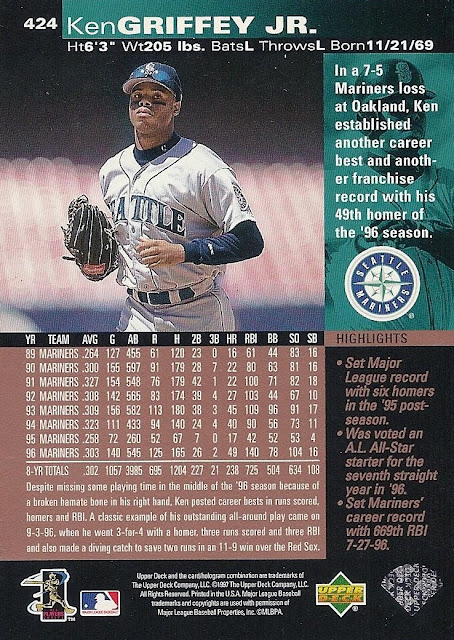 Here it is: the first short-printed Griffey base card. The layout is identical to the regular base card (which must have confused some kids back in ‘97) but with an awesome post-swing shot and trippy foil texturing in the background. It’s got all the attributes of a parallel, but brother, it ain’t no parallel. These must have driven set builders crazy.

This subset has its own foil logo which means Griffey’s name is on a lot of other players’ cards. Should I, as a Griffey collector, be chasing them? That’s still up in the air for now. If I do decide I should collect ‘em all, it won’t be unwarranted. The cards look great.

Up next, more innovation from the inserts of 1997 Upper Deck. Until then, please enjoy gratuitous pandas. 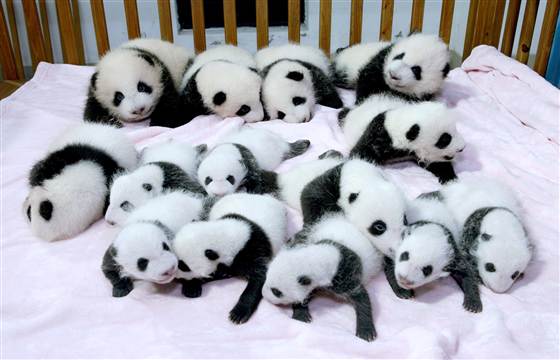 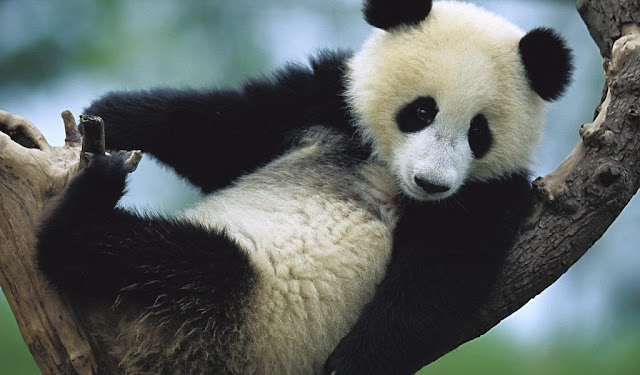 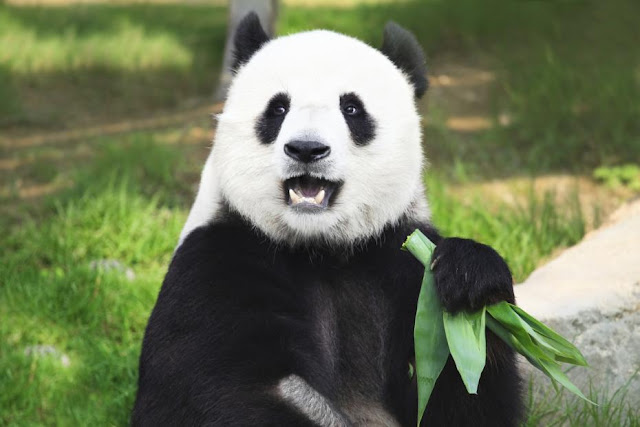 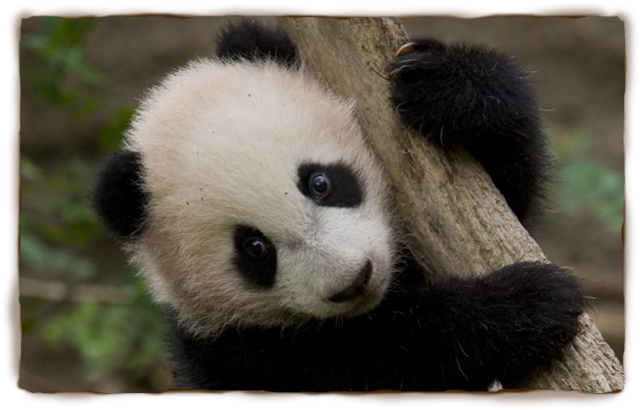 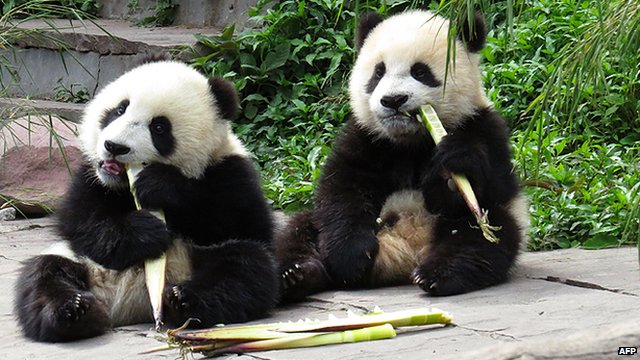