How the Griffeys of 1997 Upper Deck Changed Everything Part 2: The Inserts

Welcome to Part 2 of How the Griffeys of 1997 Upper Deck Changed Everything. This one's going to be a doozy, so I hope everybody brought clean socks. Here you go:

We’re going to start at the top of the food chain today with what is generally considered one of the mack-daddiest insert cards of all time. 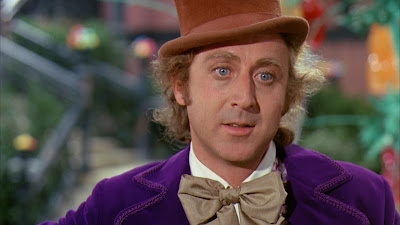 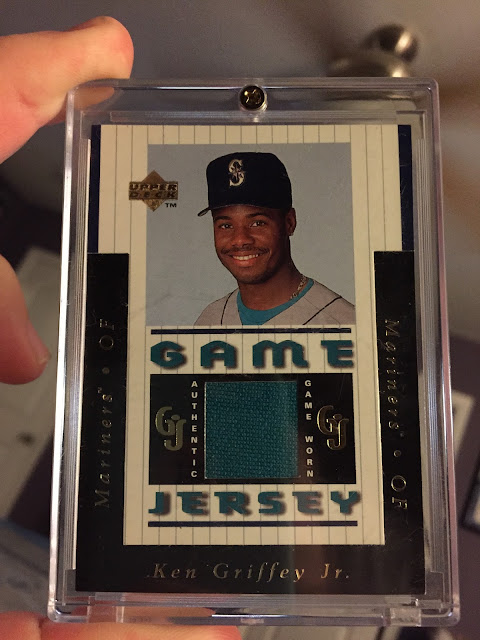 1997 Upper Deck’s greatest contribution to cardboard history: the first ever game-used relic on a baseball card. This one is a behemoth in the collecting world, and it’s frequently counted among the greatest Griffey cards of all time. It was also an early favorite for best Griffey acquisition of 2015. Was. 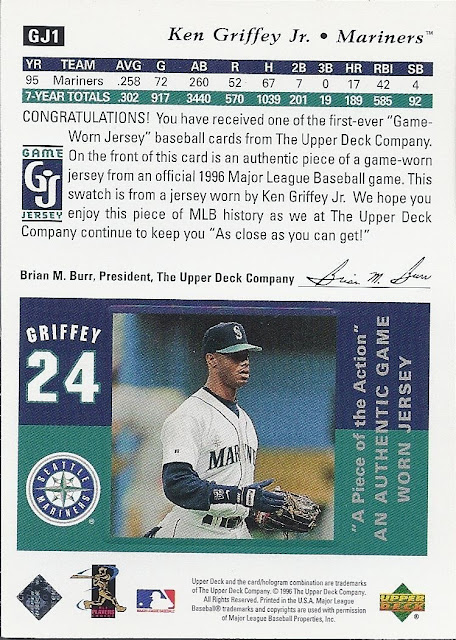 “Game Jersey” is a jersey-relic-wielding insert comprised of just three players: Junior, Tony Gwynn, and Rey Ordonez. This was an historic moment for the hobby. Suddenly the value of these little paper rectangles wasn’t quite so abstract because there is something with inherent value embedded right into the card. Suddenly you weren’t holding a glorified picture of a player – you were holding a piece of his actual game-used uniform.


This insert changed what it is that defines a “hit,” and of course Upper Deck gave Griffey the first card in the set. I’m pretty up on the prices these tend to go for on eBay. The Ordonez averages right about $5.00, the Gwynn closer to $20, and the Griffey regularly breaks $350. This means that if you’re lucky/crazy/stupid/obsessed enough to actually land the Griffey, completing the set becomes a cinch.

So I just went ahead and did it. It’s an historic and perfectly designed insert, and I’ve always been a fan. In fact, I don’t think a better-designed relic-based insert has ever been produced. Once the Griffey was mine the rest fell like dominos. In addition to these I also picked up a specimen from the throwback insert UD did in 2005: 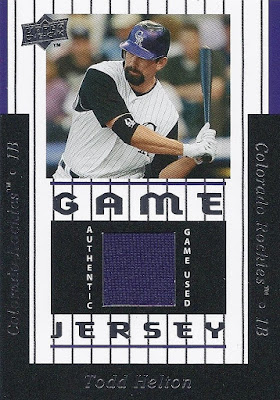 Whenever I make the decision to buy a card just for the coolness of the insert, it always ends up being Todd Helton. He’s a guy I dig that doesn’t cost an arm and a leg.

One characteristic of this card that I didn’t realize until I held it in my hands is that the stock used is no thicker than that of a normal baseball card. Nowadays relic cards tend to be the thickness of three or more regular cards stacked together (making pack searching a breeze). Not these puppies. This is actually a noticeably thin card with another noticeable thin card glued on top. The top half has been die-cut and attached to the bottom half with the relic sandwiched in between. All the white you see is actually the die-cut top half. Here’s what the card would look like deconstructed:


See what they were going for there? It's a little jersey shape with rings around the sleeves and pinstripes. I can honestly say I didn't notice that design aspect until I made this picture in MS Paint.

It’s hard to say how many of these exist. The insert is seeded at 1:800 packs with three cards in the checklist which puts the Griffey at 1:2400 packs. It was spread out between hobby (24 packs/box) and retail (28 packs/box) boxes, so averaged out the Griffey should pop up at a rate of 1:92 mixed boxes. If we knew how many boxes were made, we could figure out how many Griffeys were made. Sadly, Upper Deck will probably never tell us.

Based on market demand I’m guessing there are probably just a few more of this Griffey than there are the 1993 Finest refractor of which it is widely believed there are 241 to be had, but even that is only a loose estimate based on production numbers. Without production numbers, how are we going to estimate the number of Game Jerseys?

For no other reason than the popularity of the card combined with its going market price, I would guess that there are somewhere between 300 and 400 copies floating around. You can take or leave that estimate - we may never really know. 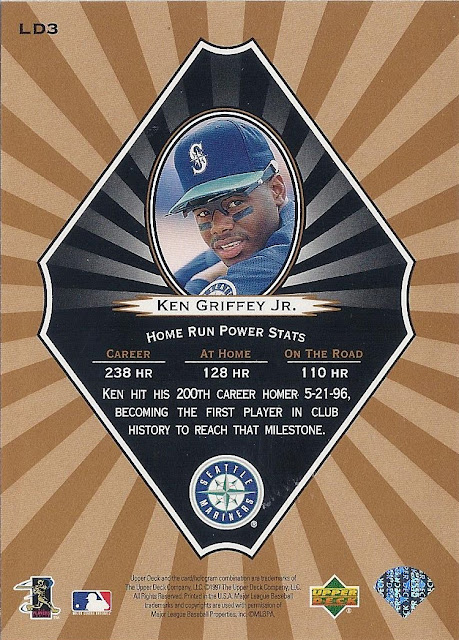 Ooh, shiny. Where many of these inserts actually have some substance to them, this is more of a “look what we can do with foil” situation. It’s not a bad looking card – the texturing is impressive and that thin outside border showcases Upper Deck’s ability to center – but the title has no real connection with the design and the card back is just a recycled photo with power stats. Plus it’s got that weird color on the front which I think is called puce. I’d really like to see an uncut page of these with those borders merging with one another. A looker, for sure, but I can take it or leave it. 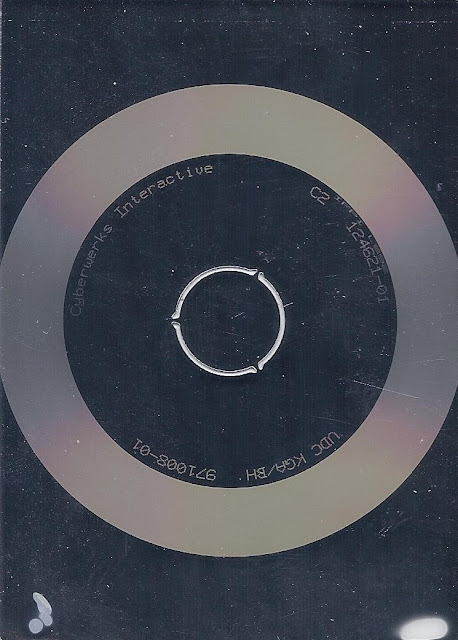 The fourth and final innovation by 1997 Upper Deck were cards with digital content built right into them, namely PowerDeck cards. This particular one, the only one in the checklist, is the grandaddy of them all. Here Upper Deck really flexed their technology muscle. Sure, those playable vinyl record cards from back in the day were cool for our uncles and grandpas, but this bad boy was made for the digital age.

You were meant to remove the little cutout from the center (PSH…yeah, right) and play the card itself it with an adapter (which I don’t have). I’d love to know how many of these actually made it into a CD tray. I can’t imagine the content (an interview) ever being good enough to warrant punching the hole out or allowing your computer to spin the card at some ungodly cardboard-wrenching RPM. It certainly isn’t happening now that these babies go for in the $20 range (I got mine for way less than that).

While it didn’t really last save for a few more PowerDeck sets making it into the market over the following years, this is still one heck of an innovative idea. None of the other PowerDeck cards were anything like this first one because, frankly, they weren’t cards at all. They were little CD’s with two flat sides that came in plastic holders. I doubt we’ll see anything like this first one again until Topps makes some super-thick card with a little wired low-profile USB drive built-in (I’m calling this now, BTW). 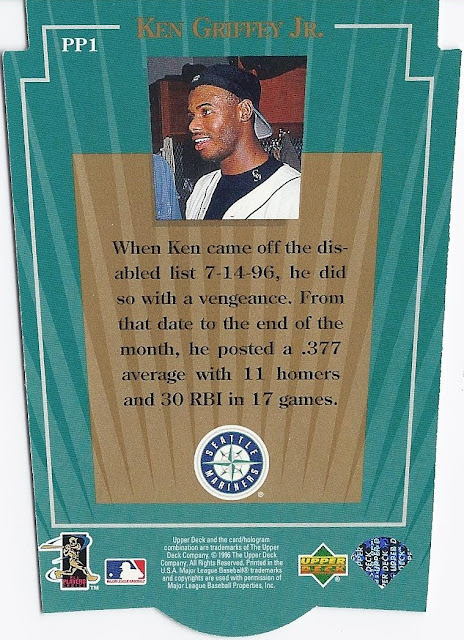 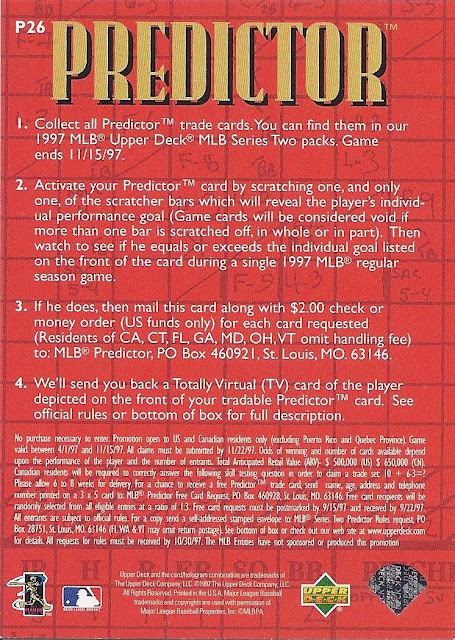 It wouldn’t be mid-90’s Upper Deck without Predictor. This year each card has four possible career goals, any of which each player could potentially reach. You had to scratch a bat to decide which goal met would make your card a winner. Design-wise it’s not much to look at which was disappointing considering Junior’s Predictor cards from ’95 and ’96 were such fine specimens of Griffeydom.

The prize for a winning card? 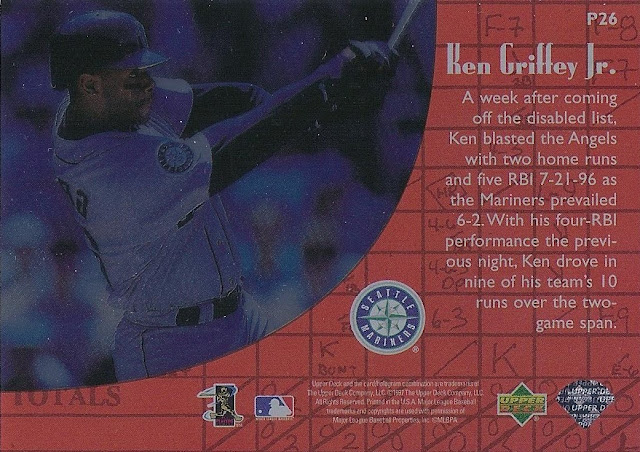 That would be the picture used on Griffey’s ’97 Collector’s Choice base card. No real innovation there. As in previous Predictor redemptions it’s more or less the same design as the game cards but with a techy difference. This year they gave us Cel Chrome cards as seen in Upper Deck’s UD3 brand from this same year. That big field of silver acts as a watermark of sorts and is only visible in good light. Here’s me trying to make that happen: 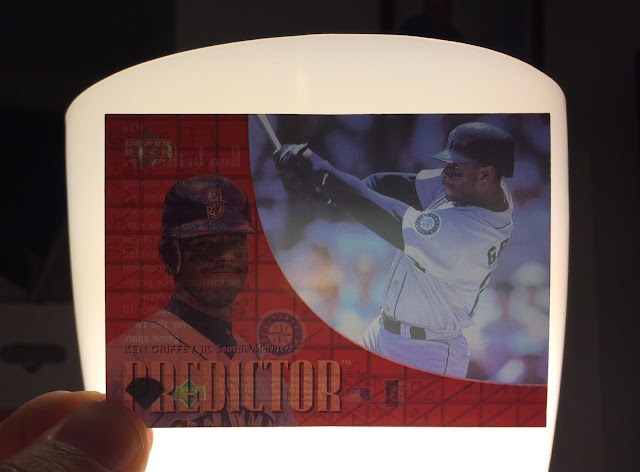 I was never crazy about this Cel Chrome stuff as it only looks decent if you peel off the plastic surface protector, but once you do that the surface is highly susceptible to scratches. I guess what I’m saying is it’s not my favorite Predictor set. 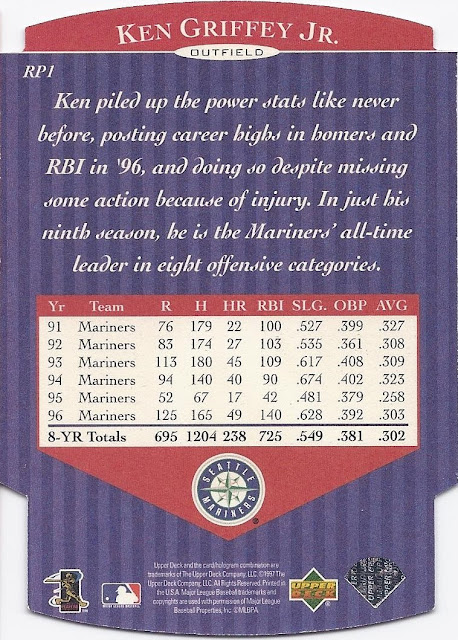 Run Producers was a die-cut insert since it was first introduced in 1996, but this ’97 design is definitely the best. In addition to being less damage-prone than its predecessor, the centered banner nameplate, muted primary colors, and sepia background give this card a classier look. They also give us a reasonably large stat box for a die-cut insert. An appreciable step up. 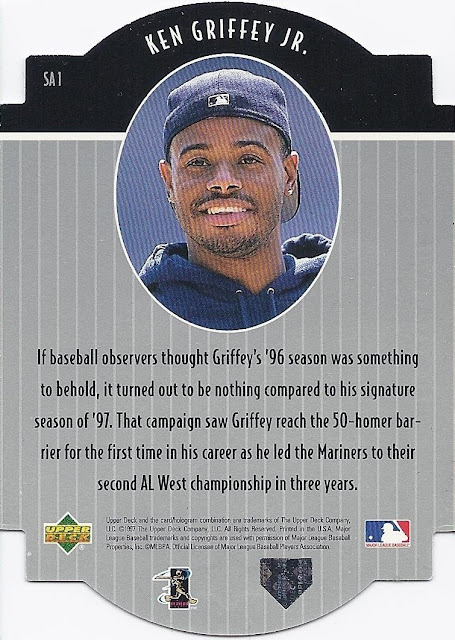 Can you imagine how much garbage the Upper Deck factory produced in ’97 with all that die-cutting going on? This card’s eight corners and a rounded bottom and top edge make condition-conscious collectors like me nervous. I’ve always been a fan of background photography done in textured foil, a printing technique that Upper Deck pretty much mastered in 1997 (for an absolutely astounding example of this, see the background on the 1997 Upper Deck Home Team Heroes #HT1 Griffey/A-Rod Jumbo).

There’s also a gold parallel to this insert because why not? 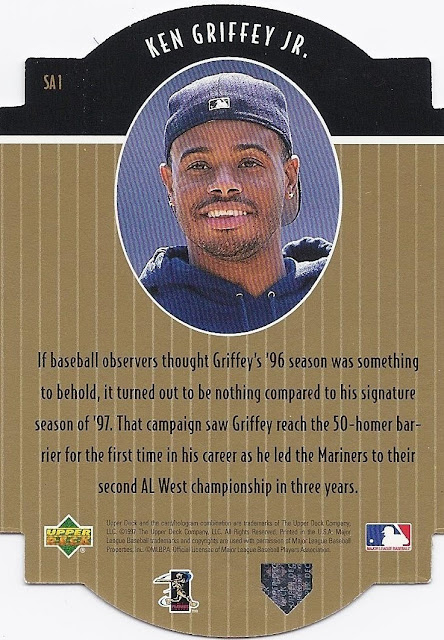 I do enjoy how Junior’s stance here fills out the card nicely. There’s also a ton of proportionality to the design with every element either centered or balanced on the other side. As much as I like the card, it’s tough to come across one with little or no damage; so if you do, snatch it up (carefully, of course).

Despite all these bloody inserts I've shown, I'm still three cards short. Here are all my Griffey needs from 1997 Upper Deck:

Still, that was some serious insert action, am I right? You probably won’t be seeing any posts for later sets that require a split the way this one did. After ’97, rather than create tons of new inserts for their existing brands the way UD did here, the card companies instead started flooding the market with sub-brands, each with its own theme and inserts. That makes 1997 Upper Deck one of the last “supersets” of the 90’s.

And did you notice something? Junior was an integral part of three of the four innovations 1997 Upper Deck is known for.

The first SP base cards? A subset called "Ken Griffey, Jr.'s Hot List."
The first relic cards? Junior is card #1 and still the most sought after of the three.
The first card with digital content? A one-card insert featuring one and only one player. You know the guy.

Upper Deck was laying the groundwork here for card innovations that would take us into the next century and beyond, and they did it all with Griffey cards. How 'bout that? These Griffey cards really did change everything.