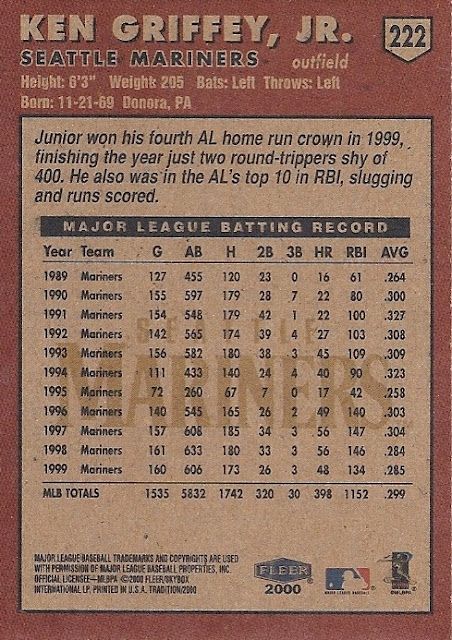 Is this a good Griffey card? Yes.  A classic design, albeit not entirely original, and Fleer's first foray into the nostalgia market.

The very early 2000’s saw a massive shift in focus to more nostalgic sets.  The rehashing of classic designs and printing techniques was suddenly rampant as all the major brands scrambled to claim their roles as ambassadors of the past.
Obviously Topps would have little competition as masters of the throwback set - they had been putting out an unbroken line of consecutive sets since 1952, produced several throwbacks under the Archives brand, and also owned Bowman who was the only other brand who could possibly challenge them.  In 2001 Topps brought back its Archives brand and Bowman and Topps both began their Heritage sub-brands.

Poor Donruss was still bouncing back from bankruptcy and eager to remind collectors of their significance; hence, along came Donruss Originals in 2001.  They only made the set for one year, though, and I’m still waiting for a reprint of my beloved ’89 set.

Also Upper Deck, not having a history beyond 1989, came out with its groovy pseudo-throwback Decade 70’s set.  It didn’t seem to have the desired effect with the collecting community.

The only brand that could even try to give Topps a run for their money was Fleer.  They had produced three sets from 1959 to 1963 before disappearing for 18 years only to be reintroduced when MLB started handing out rights contracts in 1981.  Fleer had also never ceased production since that reintroduction.  They had more of a case for being called a classic brand and the pedigree to back up a decent throwback set.

By 2000 Fleer had already inundated the market with new sets in an attempt to snatch up the market share left by the numerous failing brands, and in doing that they released a brand called Tradition in 1998.  Strangely, it had no business being called Tradition in the sense that we now think of the brand.  The base cards and inserts were modern, glossy, and covered in foil; hence, there was nothing traditional about them.  This leads me to believe the brand name at that time was poking fun of the fact that so many brands were disappearing while Fleer appeared to prosper.

Thus in a smart lateral move, Fleer reintroduced Tradition as a retro brand.  The name made sense for its new purpose, and it eliminated what was essentially another pointless brand.  Pretty slick, Fleer.

One aspect of the new Tradition that is evident in several of their sets is that the designers took their inspiration from classic Topps designs of the 50’s and 60’s.  The 2000 set is inspired rather shamelessly by the 1954 Topps set.  I find this surprising as this is a brand that actually made cards in the 50’s and 60’s.  They have their own designs to re-hash - why go straight for another company’s design for inspiration?

I do like how they printed the base set on brown cardboard.  The cards feel like sturdy, high-quality vintage. 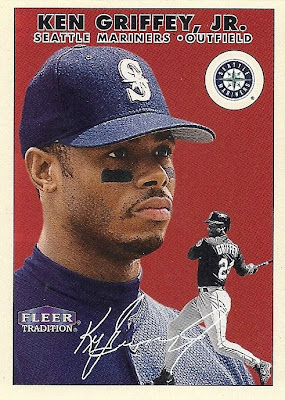 Griffey looks determined, son!  Look at this face.  You can’t help hearing those nuns from The Sound of Music belting out “Climb Every Mountain.”  He’s like, “Yes. Yes, I will climb.  Every.        Mountain.”  Nice portrait.  The design, however, is far from perfect.  The background color is just the worst.  Also the white circle around the logo is huge.  Why is it so huge?  Everything else about the card is just alright.  I do like how the smaller action shot Griffey is standing on the card border like one of The Littles.

There are actually three versions of this card:

The cards are identical on the front apart from a high-gloss on the glossy version.  The Twizzlers promo card is printed in a pretty standard way on white card stock.  The backs are identical apart from the word "Glossy" and the little Team Twizzlers logo. 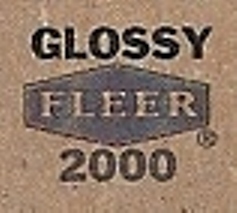 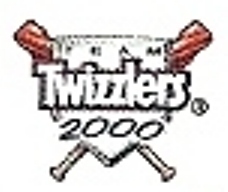 I prefer Red Vines, but far be it from me to prevent anyone here from getting their Twizz on. 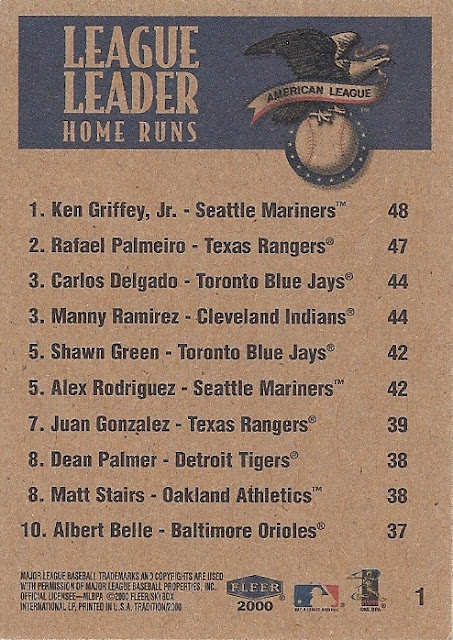 Junior looks good here, as does Delgado.  Very conscientious and proud to be League Leaders.  But what is the deal with Raf?  That is the most unhealthy picture of him I’ve ever seen.  He looks like Tommy Wiseau, all pale and lumpy.  This card is 33% upsetting. 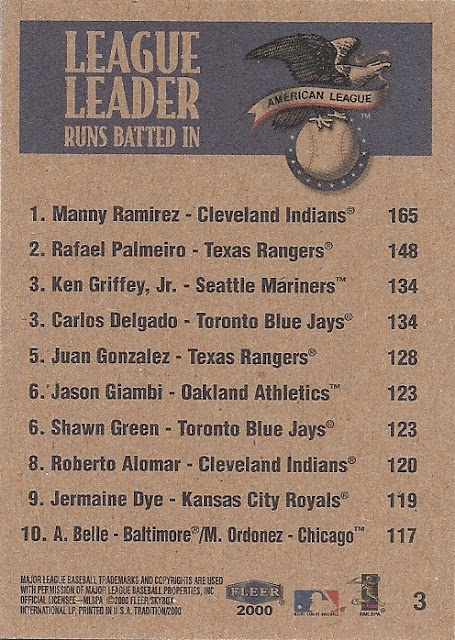 Ditto.  Griffey tied Delgado in RBIs, so I don't know how they decided to bump Carlos off this card.  I guess it was star power that made the decision here. 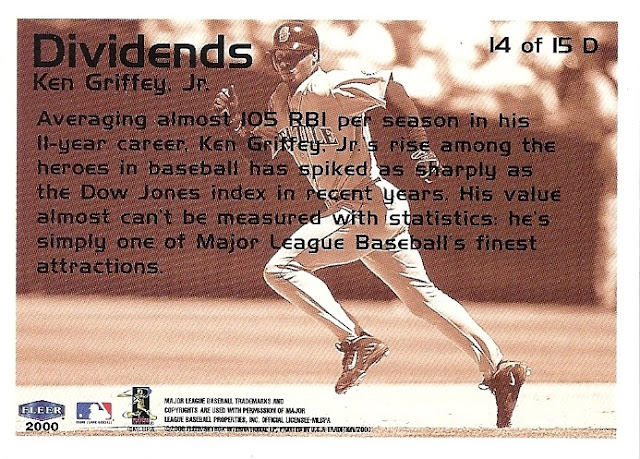 The back of this card compares Junior to the Dow Jones.  Frankly the concept here isn’t bad, but I would like to have seen some graphs with up-slanting red lines, maybe a stock ticker tied to actual stats.  Perhaps a bull, or a Wall Street sign.  Something.  Instead, flipped-up shades.  They missed the mark in every department that does not involve shades.


Printed on translucent plastic, this is almost the perfect card in a utilitarian sense.  It’s got no corners to damage as they have all been rounded out.  It is sufficiently thick that you could probably cut a soft cheese with it, wash it in the sink, and slip it right back into its top loader with nobody the wiser.  I bet grading companies like PSA pull these out of envelopes and just slap 10’s on them sight unseen.  This is the Nokia cell phone of baseball cards - it will damage you before you damage it. 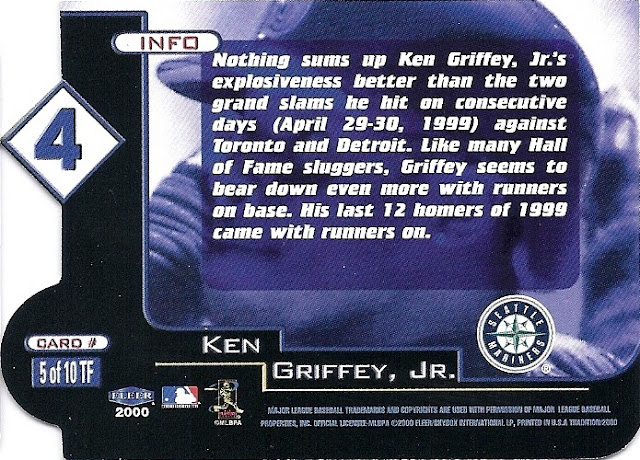 Man, oh, man.  I’ve wanted to write about this card for so long.  Please excuse me if I indulge.

This insert has the dignified simplicity of an Animal Collective song - there are just a whole lot of things going on at once here.  I want to say to this card, “Hey, card.  Why do you look like that?”  To which the card would almost certainly reply “!!!AWKB!DLU5rg8B!!!!SLKLeWKJND!!!!!!!!!1!!!!!”  I mean, look at it.  It’s the Tazmanian Devil of baseball cards.

I usually try saying a few words about each design, but it’s hard to pick where to start with this one.  I’ll give it a try: ummmm, he’s farting a baseball.  There’s a good start.  The ball is huge, too - I’m hoping that’s a perspective thing.

The design here raises a lot of questions about how this card was produced.  Questions like what is the purpose of the die-cutting here?  Why is Junior glowing like one of the aliens from Cocoon?  Why are the logo and name in that awkward, not-quite-centered spot?  What is that little white diamond?  Is it on there because it has four sides?  Why is it called Ten-4?  Why not Roger, or Message Received, or Over and Out?  Is it something to do with walkie-talkies or HAM radios that I’m completely missing?  Was the die-cut necessary for the theme?  What is the theme?

My only guess as to the theme here was grand slams which score four runs.  Having read the backs of most of these cards, that definitely is not it.  Maybe it's four bases, the number you touch after a home run?  And the white diamond is a base?  Well then what is the significance of ten?  Whatever.  This card is bananas.

There is one thing that I love about this card.  While there is a plethora of unreasonable die-cut craziness, that left edge is laid out perfectly for slipping this card into sleeves.  Start with the card tilted to the left, slip the sharp corner into the sleeve, then rotate the rest of the card until vertical and slide it on in.  It rests on a flat edge, so it remains undamaged pretty easily.  Also, this card is an octagon.  Crazy, right?


They say a camel is a horse designed by committee.  If that’s true, this is a blue camel with twelve humps and a propeller.  You can get this monstrosity for 45 cents on COMC, but if you handle it too much you’ll go blind.  Play it safe.

Come to think of it, Over and Out is actually a pretty awesome name for a power hitter insert.

While we're here, let's knock out the Update set.  It was released as a factory-packaged complete set only.  There were no packs nor inserts. 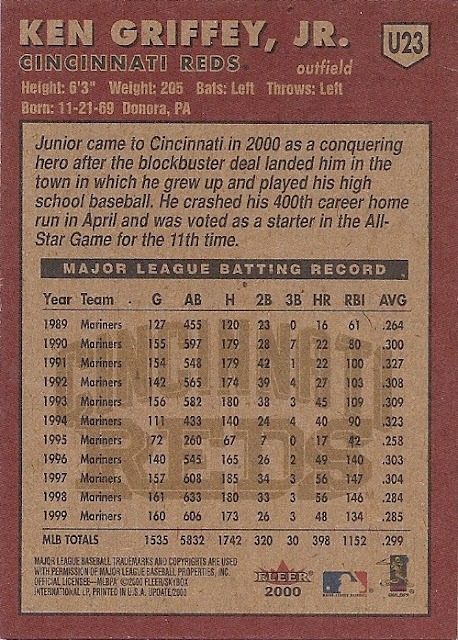 Griffey's first Fleer card as a Cincinnati Red.  The yellow background would have been more appropriate on the Mariners card, but it still looks great here.  Nice picture, too. 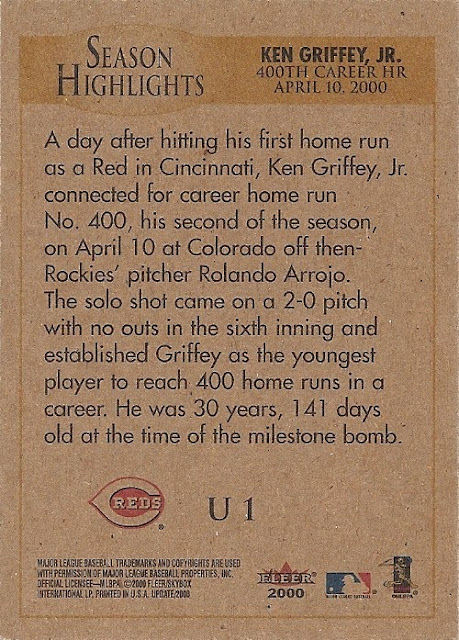 This is a solid highlights card - a picture of the act and a nice description.  It's not flashy, but they gave Junior card #1 in the set which I consider an honor.

There are no particularly rare cards from this set apart from three one-offs from the Hawaii Trade Conference. Here are the Griffeys I am missing from 2000 Fleer Tradition:

I have barely scratched the surface on Fleer during this time.  This is a brand that put out a whopping 30 sets from 2000-2002.  Thirty.  And those are just the ones released under the Fleer name.  There are more.  Crazy.

Enjoy your football this weekend, and Geaux Saints!
Posted by The Junior Junkie at 1:08 PM