I got a Griffey guy!  Of course, he probably calls me that, too.  He's an older gentleman, soft spoken and still embarrassed to say "I love you" to his wife on the phone in front of the other dealers.  He also insists Dr. Beckett has been discounting Junior’s cards so much because he knows Junior will be in the Hall of Fame, and he wants to snap up all the Griffeys for himself.  This guy is just the right mix of henpecked suburban dad and crackpot old coot to be endearing.


There's quite a spread on his tables, too - patches, relics, and autos abound.  Not much vintage, but I'm not looking for vintage.  I've picked up a few random Junior relics from him at past shows and at vast discounts, but at the July show he had brought a box of Griffeys that got my heart racing.  He told me to pick out the ones I liked and he would make a good deal.

I defiantly built a mighty fantasy stack of inserts and serial numbered gems that I already knew I couldn't afford.  He took some time going through them (the hi Beckett values were on stickers on the backs), mumbling softly as he added in his head.  I was completely prepared for him to look up and say "How does $200 sound?" to which I would reply "Let me put a few back."  But he didn't.  He said "I can do $45."  I nearly did a jig.

I told him I'd be back next month, but I wasn't.  I felt bad.  Luckily everything worked out so I could go to this month's show.  The guy remembered me and was glad to see me.  I apologized about missing the last show, and he said don't worry about it.  He even let me come behind his tables and go to town on his card boxes.

Before I knew it he had sold me the rarest Griffey card I’ve ever owned, but I saved that for the end.  Here's what I pulled: 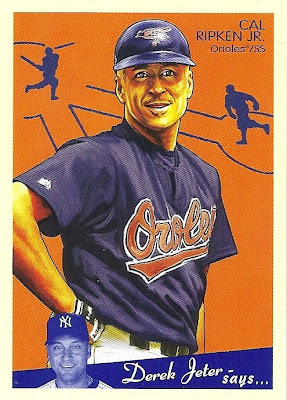 Unexpected start, I know, but look at those eyes.  We all as card collectors know that Cal has some pretty eyes.  Have you ever looked at them?  It's like the first time I heard the Beatles (movie reference!).  But here he looks like robot Robin Williams in Bicentennial Man.  I am afraid of this card, but I am equally ashamed that I've seen Bicentennial Man. 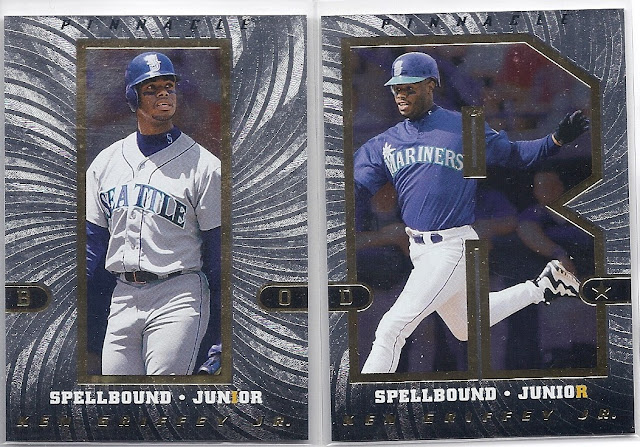 These will eventually spell “Junior.”  I already had the O and the R, but I figured an extra R may help if I meet another collector who needs it.  I am currently sitting on I-O-R-R. 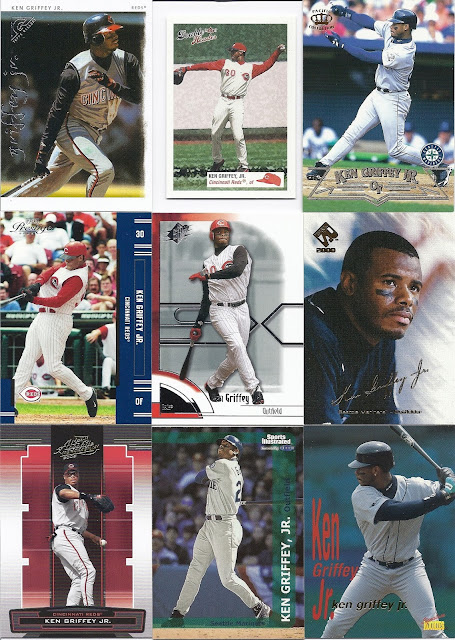 He had a binder loaded with 90’s stars.  I found where the Griffeys began and ended (about a dozen double-filled pages), held them in my hands like a giant sandwich and said, “How much for this?”  He replied, “Are you serious?” and I said “Yes.”  He looked a little troubled, so I told him not to worry about it - I’ll just go through them and pick out the ones I need.  This is always a task as I invariably go home with cards I didn’t realize I already had.  For example when I got home and started filling the binders I found that I already had four of these.  It didn’t matter much though as he ended up throwing the binder cards in for free. 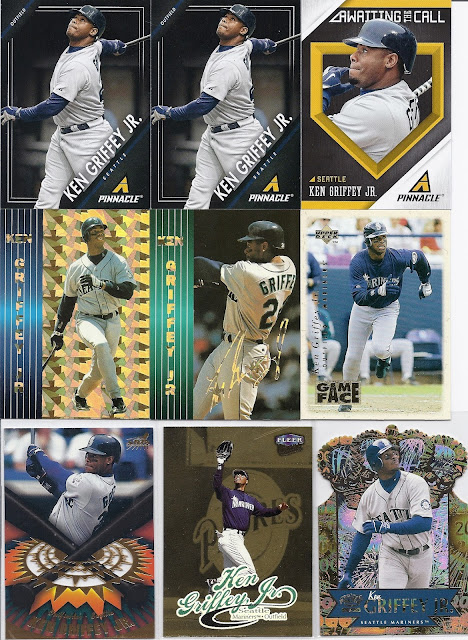 The Gold Medallion Ultra cards of that year have a gold foil stamp on the back that let you know you got a parallel.  I’ve never seen that, nor did I know it was a thing for that set.  Those two gold holofoil cards appear to be oddballs with illegible brand information on the back.  There’s also a fancy die-cut Pacific insert (you know how wacky those can be) and an intricately-foiled crown card.

The three 2013 Pinnacle cards I got from another dealer who had busted a box.  I sifted through his pulls, set aside all the Griffeys, and snapped them up on my way out for a pittance.  I already have them, but again, trade fodder.

I talk about trading with other Griffey collectors, but I have yet to actually do it.  There's a part of my brain that insists that there's some guy who lives just around the block from me with another Griffey collection; and we'll meet one day and talk baseball, then get to Griffey, then cards, and before I know it he's at my house and we're just throwing new Juniors at each other and giggling.  Soon we'll be riding bikes together and staying up "real late" talking about girls.  I'm starting to realize that this guy does not exist - it’s just a subconscious excuse to hoard (and be 12 again). 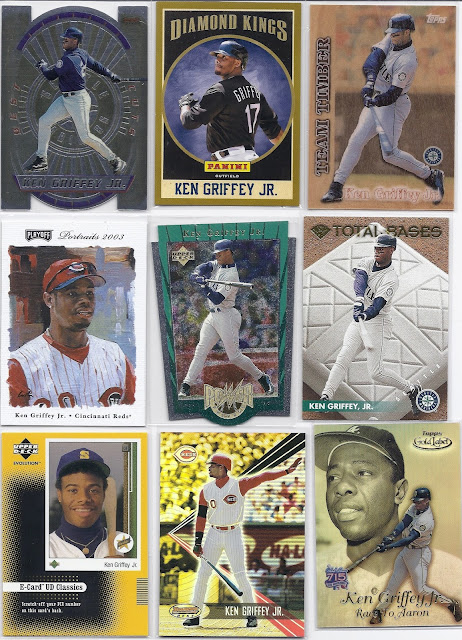 The Panini Diamond Kings is from the National - one of the vendors had a huge stack of them.  The Playoff Portrait is heavily textured like a painting and the Leaf Total Bases insert is textured like a base.  Serial numbers are everywhere at this point, but the Topps Gold Label with Hammerin’ Hank is still my favorite in this group. 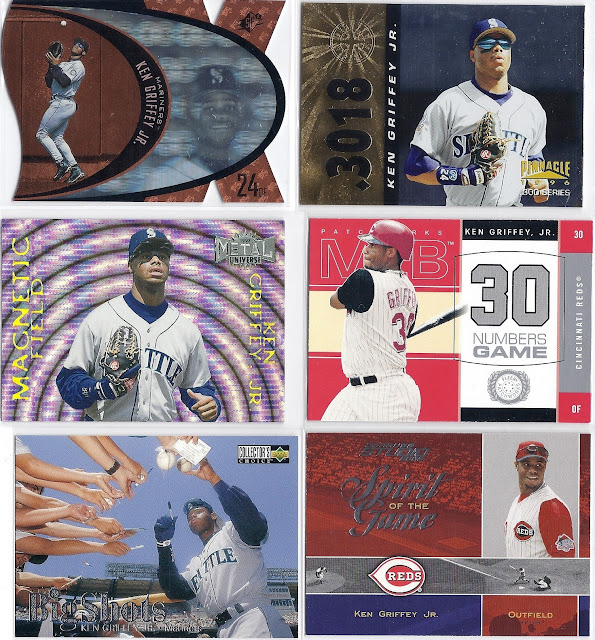 The cards are really starting to get cool now..... The SPx bronze card was a big find for me as I already have it in several colors.  I’m pretty sure I can make what you would call a rainbow at this point.  I already own multiples of that Pinnacle .300 series subset card, but this one is shiny foil.  What is that?  It’s not the Starburst parallel…. Anyone?

And sorry, Nick, but that's one autograph signing card you're not getting until I get a duplicate.... 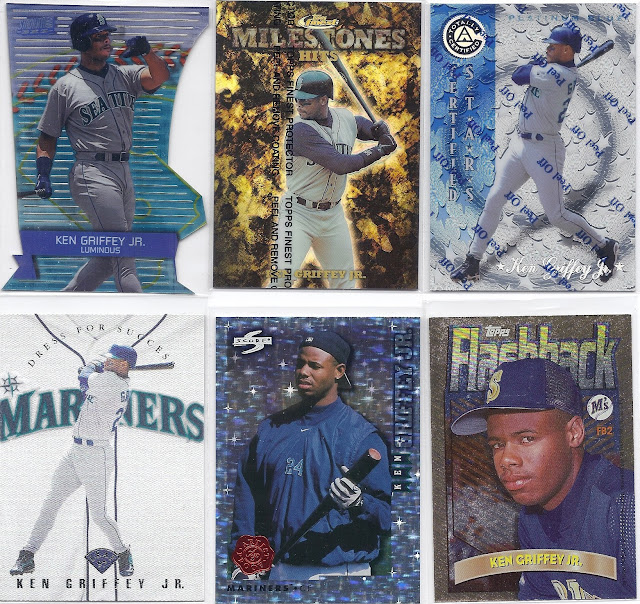 That Topps Finest Milestones card is heavily holofoiled on the front and back.  Every square inch looks like an iPhone 5 screen through polarized lenses (try it - sending a text is like soaring through a rainbow unicorn wonderland).  That Stadium Club 3x3 has some of the thinnest cuts I’ve ever seen, the Pinnacle Certified has a really cool spiral effect in the foil, and the Dress for Success insert from Leaf has a layer of cloth with raised lettering.  Also that Score has to be one of the most exuberantly different parallels I’ve ever come across. 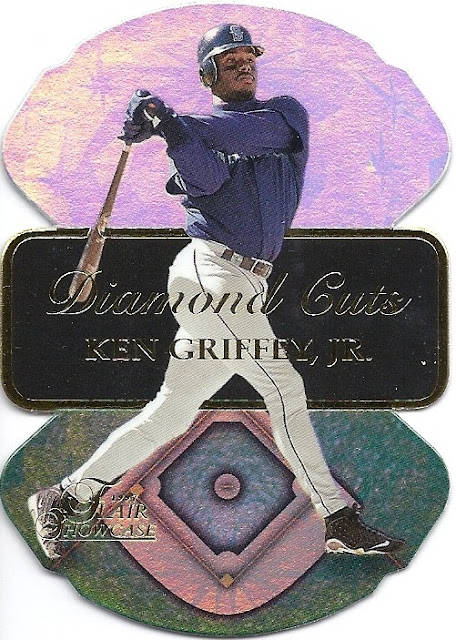 Just a cool die-cut/foil job.  This card must have booked for a fortune back in the day. 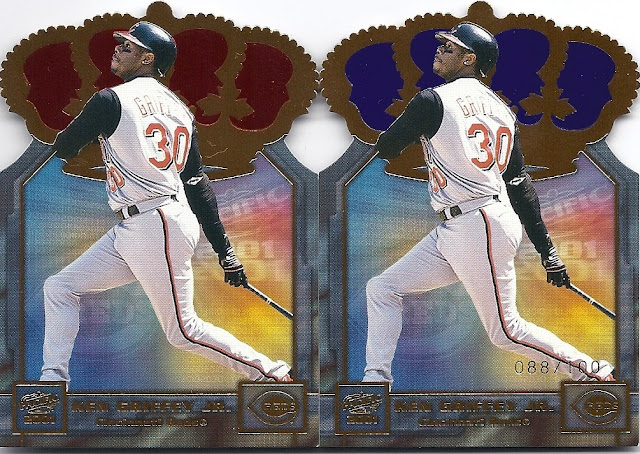 The blue is numbered out of 100, and apparently there is a green version I need to find.  Nothing like an insert with multiple parallels of increasing rarity to make you feel like you are powerless against your goal.  Still, these are really nice.

With that, here's the best-for-last for this month and my newest cardboard pride and joy: 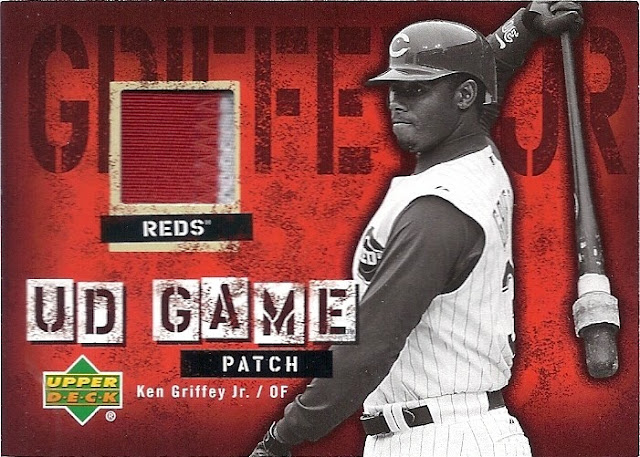 My first patch card!  Not my first Griffey patch card - I've never had a patch of anybody ever.  What a start.  There were only 11 of these made, so it’s also the most exclusive non-hand-made Griffey I’ve ever owned.

I must say that to call this item a card is a blatant misnomer - it has the heft and dimensions of a small box.  Griffey Guy had put it in a monstrous case that effectively doubles the card's thickness.  He also put a little sticker on the case that says “only 11 made” which I will never, ever remove.


That's it for this month.  I usually pick up a few ’75 minis for Night Owl, but the guy I buy them from was on vacation.  For the first time I came home with zero vintage….

Until next month I'm putting away twenty bucks a week just for Griffey Guy.  I should really get his name....
Posted by The Junior Junkie at 10:29 PM