2002 Fleer Tradition and Update: Take the Goudey With the Bad 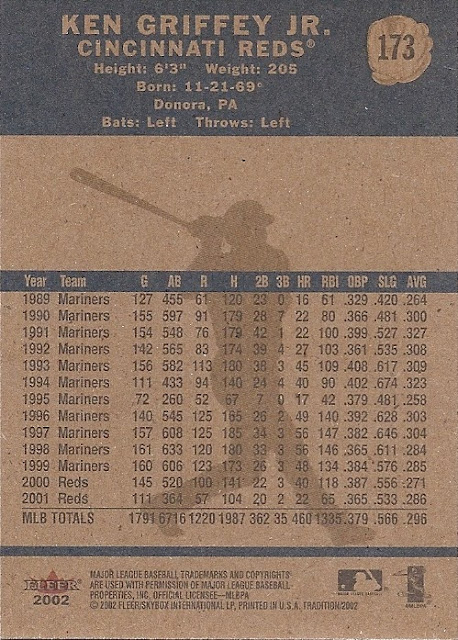 Griffey looks: in the midst his amazing swing

Is this a good Griffey card? Yes.  One of the better attempts at old-school by Fleer’s throwback brand.

The set: Done in the style of 1934 Goudey (a design later co-opted by Upper Deck), this year’s version of Tradition is more colorful and endearing than in years past.  Where the original ’34 set featured Lou Gehrig giving alleged quotes about every player, this set has just a team name in some kind of MS Word font.  Ahem.

Now, when Upper Deck did it (in ’09 I think?) they supplanted Gehrig with Griffey, which I like - Fleer on the other hand chose to ignore that whole element and do just the card design.  I must admit that it turned out pretty good - I like these cards.  Colorful and familiar to serious collectors, the base set captures perfectly the essence of old school cardboard; and they are once again printed on the brownest of the brown cardboard, lending a touch of authenticity to the brand’s vintage-ness.

The inserts, on the other hand, maintain the modernity of any other Fleer set with confusing results.

This is a great shot of the Kid in the midst his amazing swing.  Action shots can be boring, but not here.  You can practically feel the weight of the bat in this shot.  It is also silhouetted on the back behind the stats which is a nice touch. 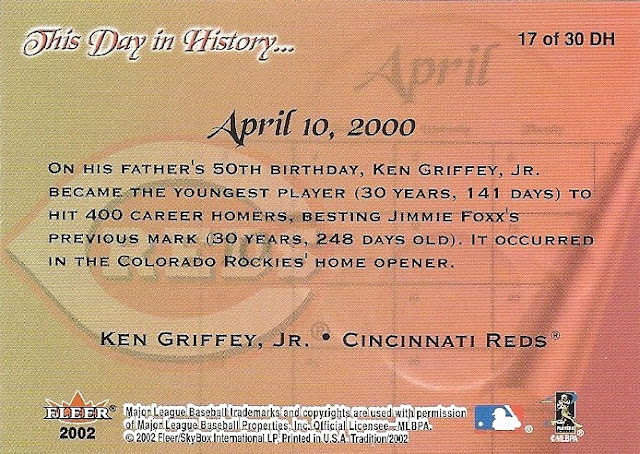 The This Day in History insert marks an important event in the career of yada yada yada, you get the gist from the title, right?  This card marks the Day Junior became the youngest to 300 homeruns.   This record has since been surpassed by multiple players, and it is currently held by Alex Rodriguez who reached the mark at 27 years, 249 days old.  I swear I don’t know how that guy does it.  Oh, wait.  Yes, I do.

These cards are smooth and shiny and feel out of place among cards printed on brown cardboard.  The baseballs below the portrait are raised.  The update version also includes this insert - for that one Fleer chose the day Junior got his 2000th hit.  I don’t have that card to show you, so you’ll just have to take my word for it.

The Update set for Tradition was Fleer’s first set that was put together entirely after 9/11, so it is very patriotic indeed.  They were nice enough to include Junior in a couple of very patriotic subsets, and here they are: 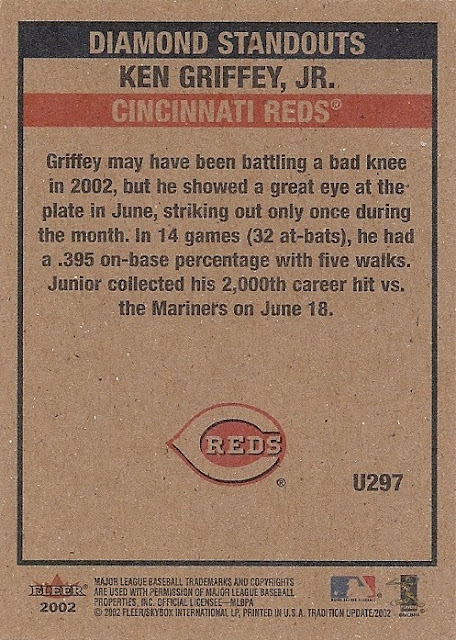 Basically this card is saying that Griffey had a great June.  They mention his 2,000th hit almost in passing, and they use a comma in the blurb where they should have used a semicolon.  Even as a Griffey fan I find this card a little boring. 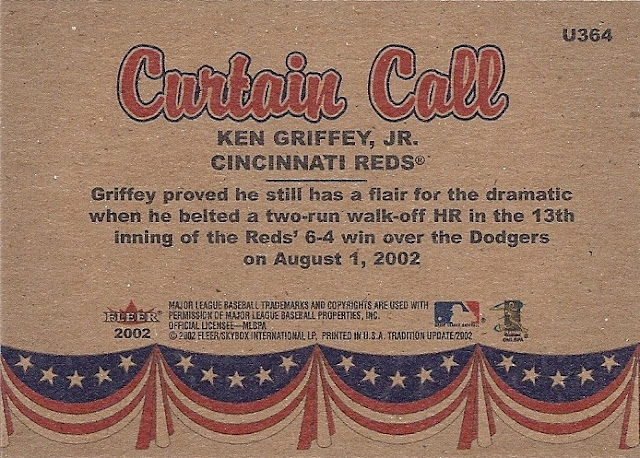 Then there’s this card.  I love this card!  It’s patriotic without being ostentatious, and the theme is solid.  Plus it’s a great-looking design with seamless carryover from front to back.  My only gripe is that it shows our guy coming in from playing outfield where there should be a shot of him batting.  Despite that, this is my favorite Fleer Tradition card from ‘02.

And don't forget this from the base card:

Here are the cards from 2002 Fleer Tradition and Update I am missing:


Despite a few minor issues this may be the best year Fleer Tradition.  Not bad, guys.
Posted by The Junior Junkie at 9:00 AM