[Warning: this post is quite scan-heavy.  Just letting you know before you dip into your data plan.]

As you may or may not know when I make a post about a specific set I usually write a little something about the set itself then move on to the Griffeys, but in this case it would have made for one seriously massive post.  For this particular set about which I have a lot to say and show, I’ve decided to divide up the material for optimal digestion.

Check out Part 2: The Box and Part 3: The Griffeys.

Upper Deck has put out some iconic sets in our time – the Baseball Heroes inserts, ’95 Collector’s Choice, the universally-appreciated ’93 base set, and the inaugural ’89 set, of course.  Then we have our personal favorites, the sets and designs that really speak to us but that don’t get the attention we think they deserve.  For me there are three: the 1994 and 2008 sets are brilliant, but my absolute favorite UD set will always be the 1995 base set. 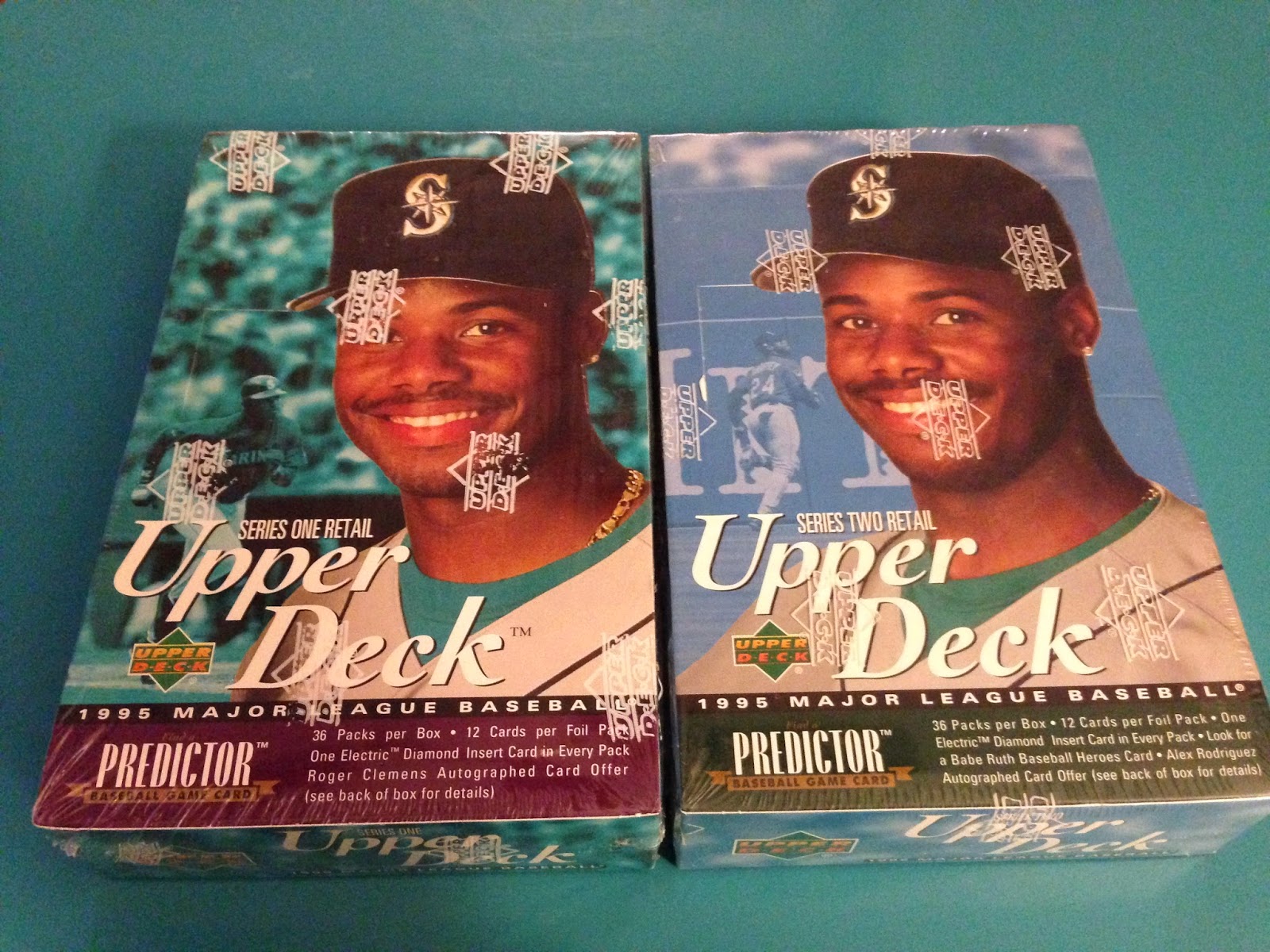 So I’m building the damn thing, and what better way to start than with a box each of series 1 and 2?  We'll get into the details of what came out of these later.  Let's talk about the set itself.

It can be difficult if not impossible to put the reasoning behind one's love into words, but I’m going to try and do just that right now: 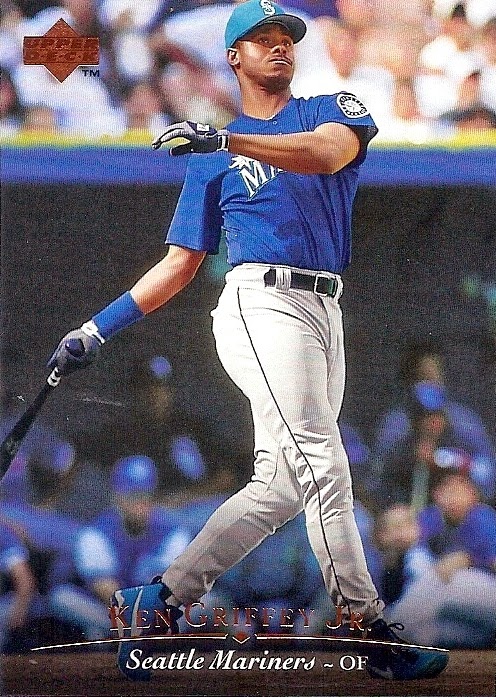 This is the card that made me fall in love with ’95 UD, so I’m using it as an example. As you can see the low-interference nameplate allows for focus on the photography which happens to be brilliant.  It’s not just well-executed – it’s unique.  Check out Junior taking cuts without a helmet.  It’s clearly an All-Star event, most likely the Home Run Derby, but Junior is known for flipping his cap backwards.  Seeing it forward like this is refreshing.

Moreover, the photo is lit perfectly – Junior is practically glowing against the backdrop of All-Stars sitting around a dugout.  And speaking of the background, do I spot Frank Thomas?  This photo is so perfect I have to wonder if it’s even real.


Design-wise the bottom-mounted nameplate works perfectly in any orientation, horizontal or vertical; and slight shading at the bottom of every card gives weight to the player name and sets off the color of the foil nicely while also moving focus to the photo.  Similar to the 2008 set, this aesthetic can be summed up as “elegantly low-impact with stellar photography.”  That’s everything I could want from a card design.

Don't take it from me.  Decide for yourself. 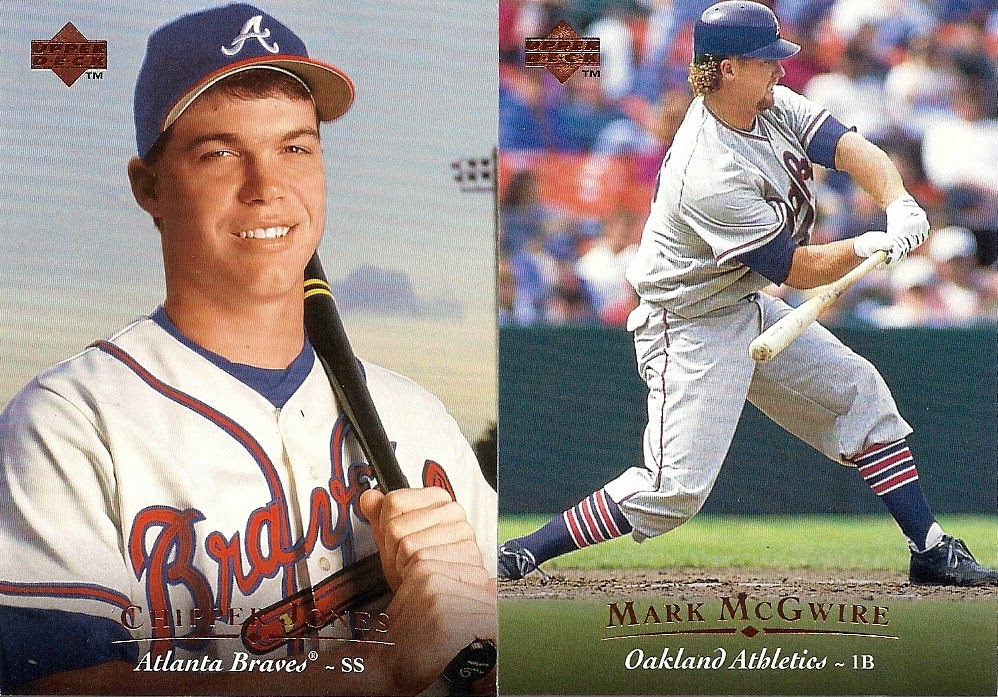 Here are two typical '95 UD photos.  We have a perfectly-shot outdoor portrait of Larry Jones there and a unique action shot of Big Mac donning throwbacks. 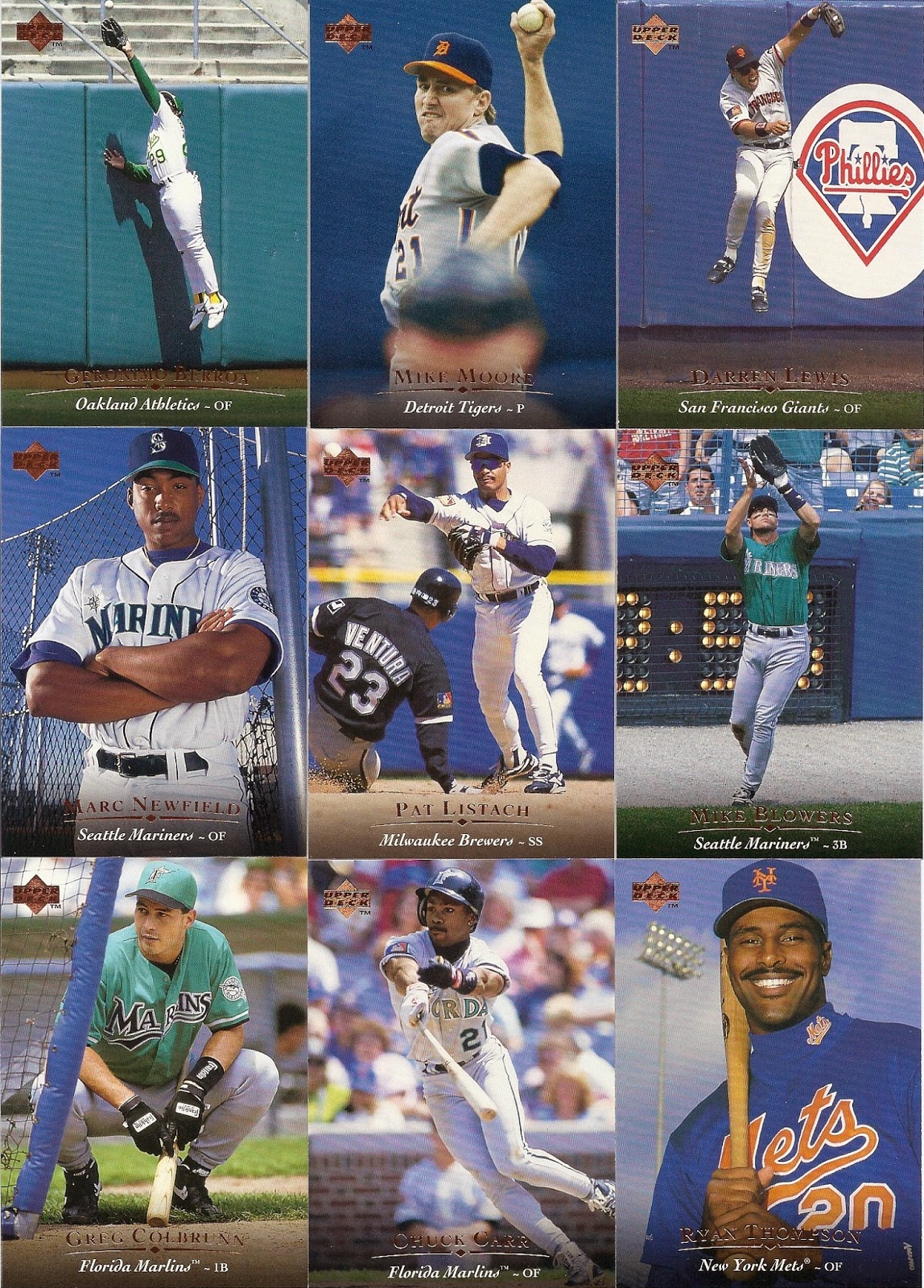 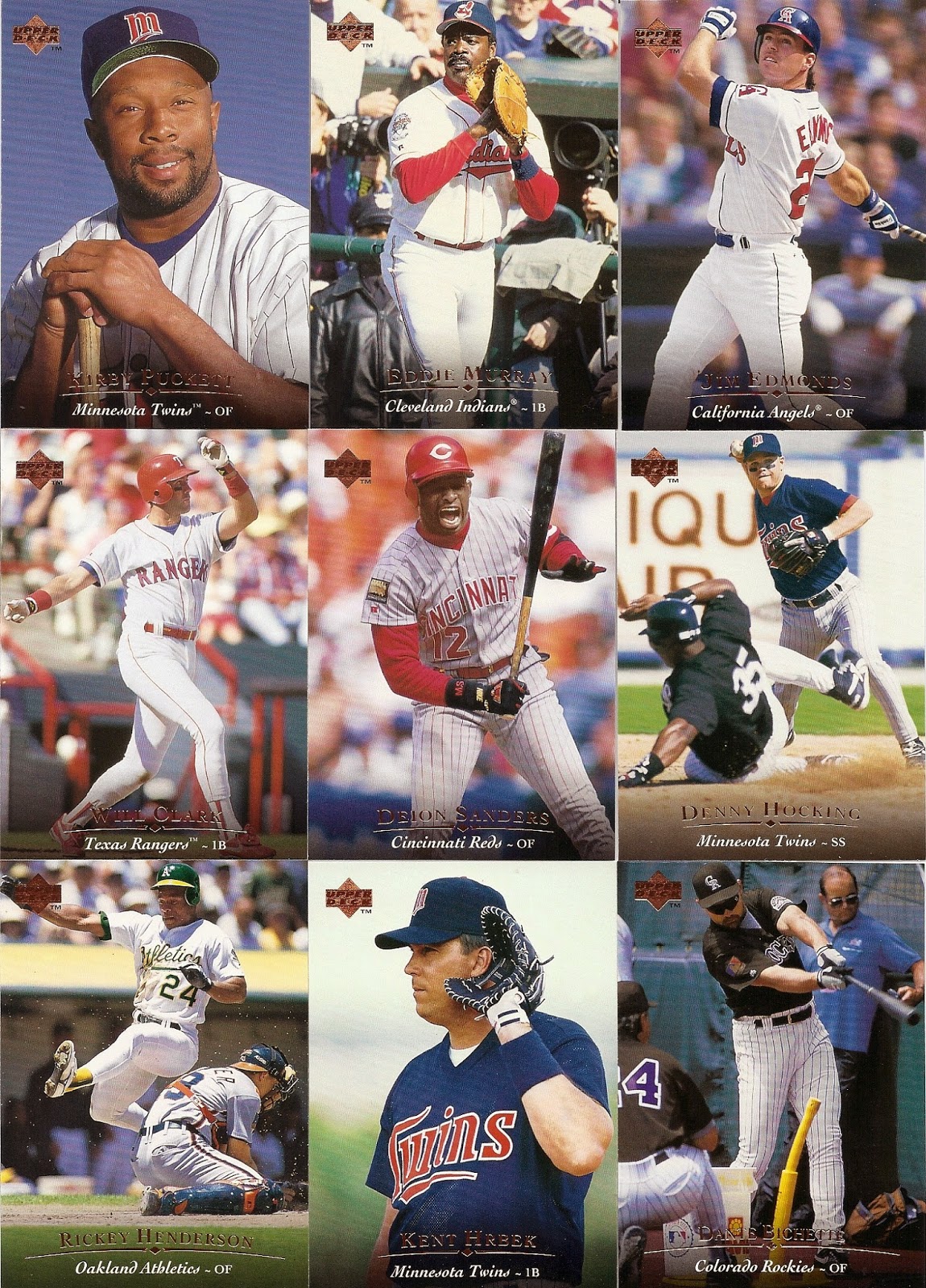 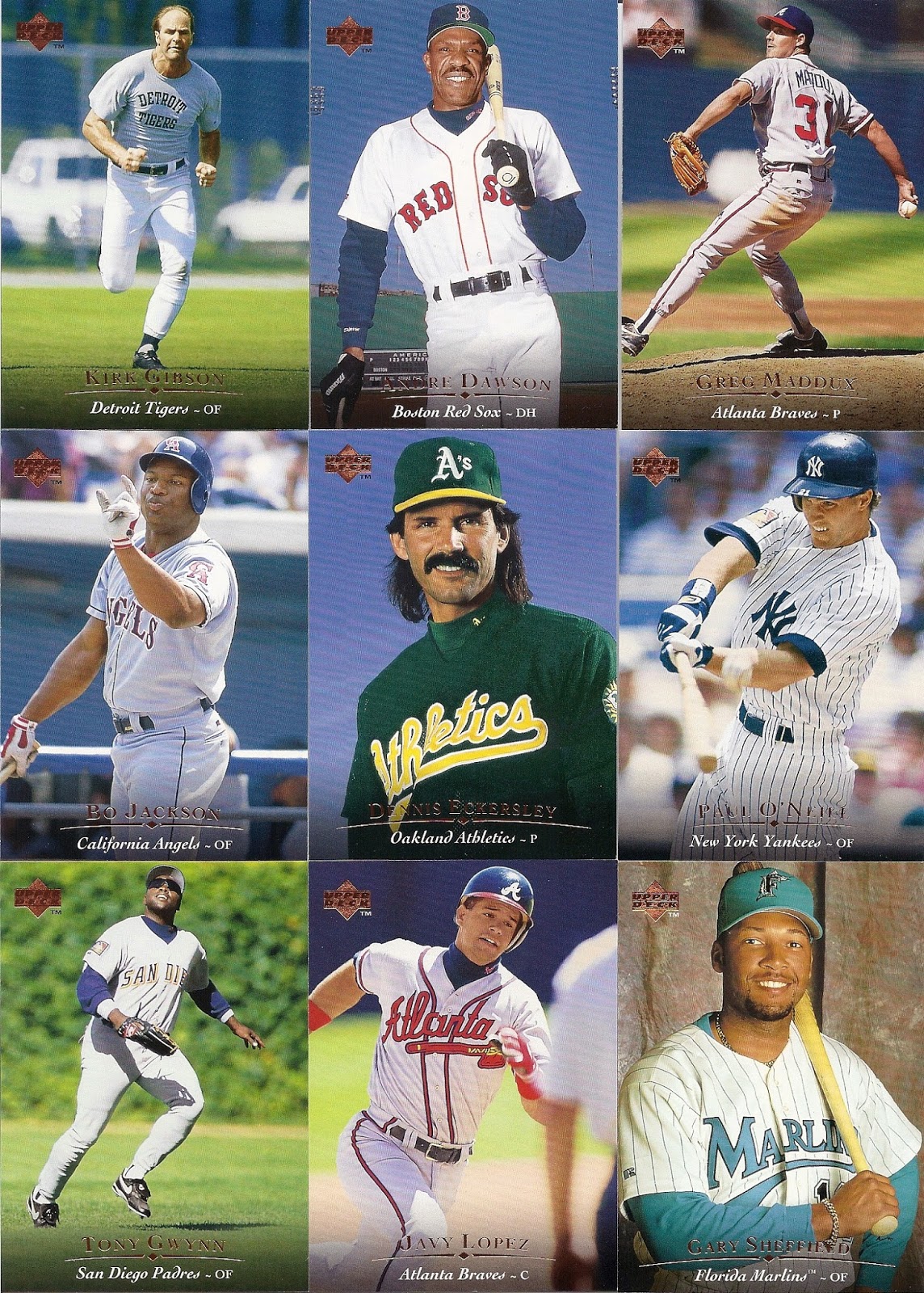 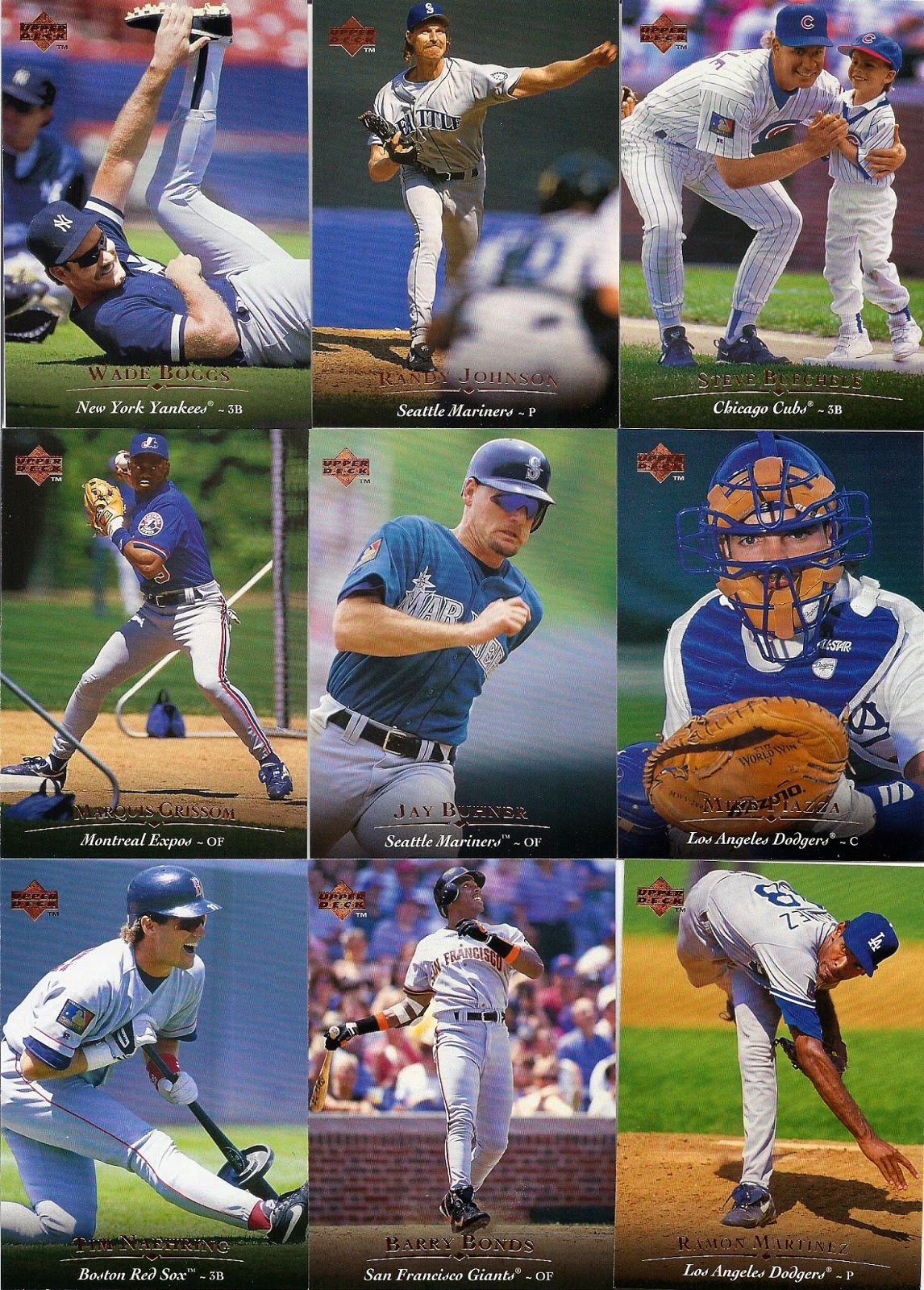 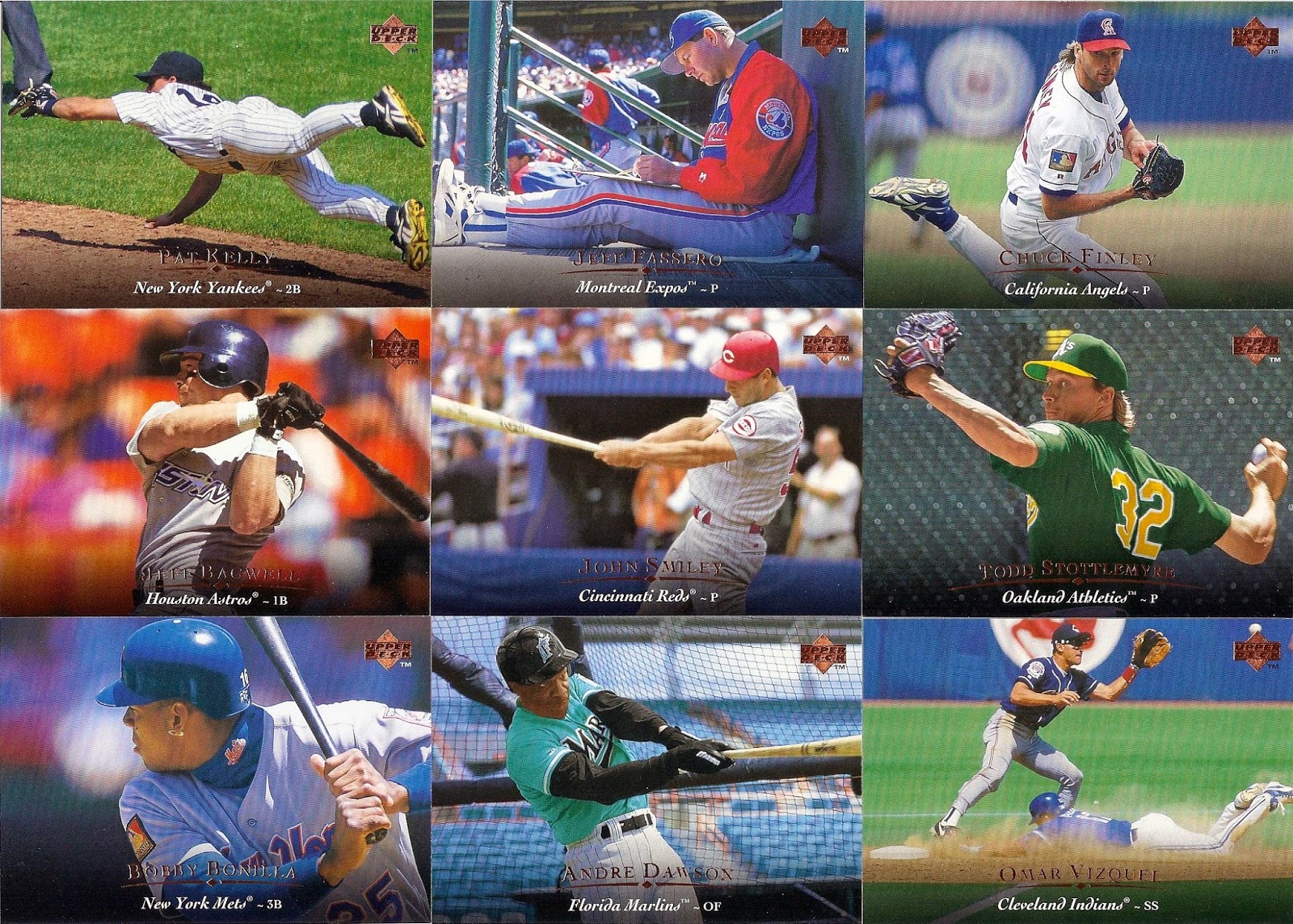 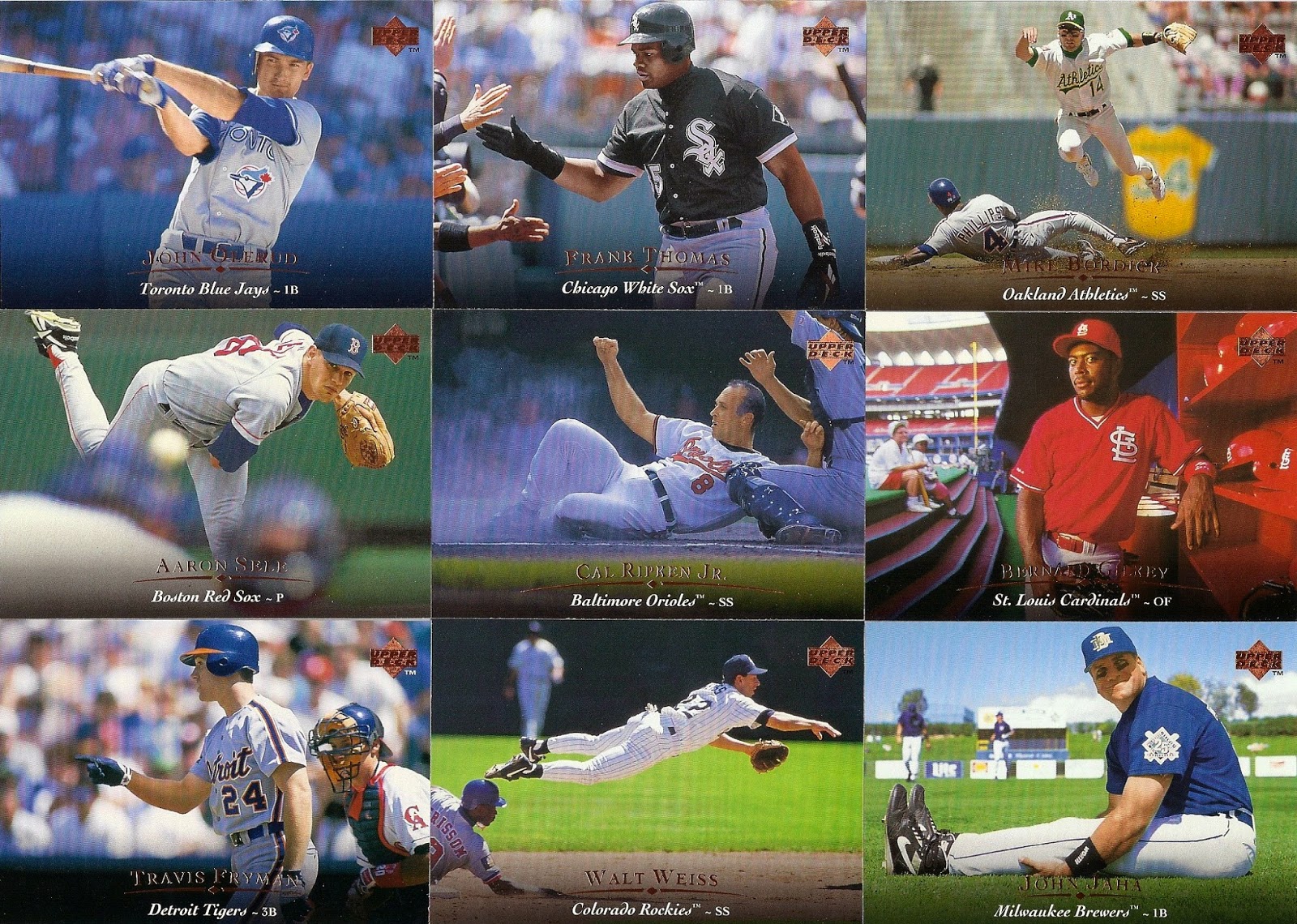 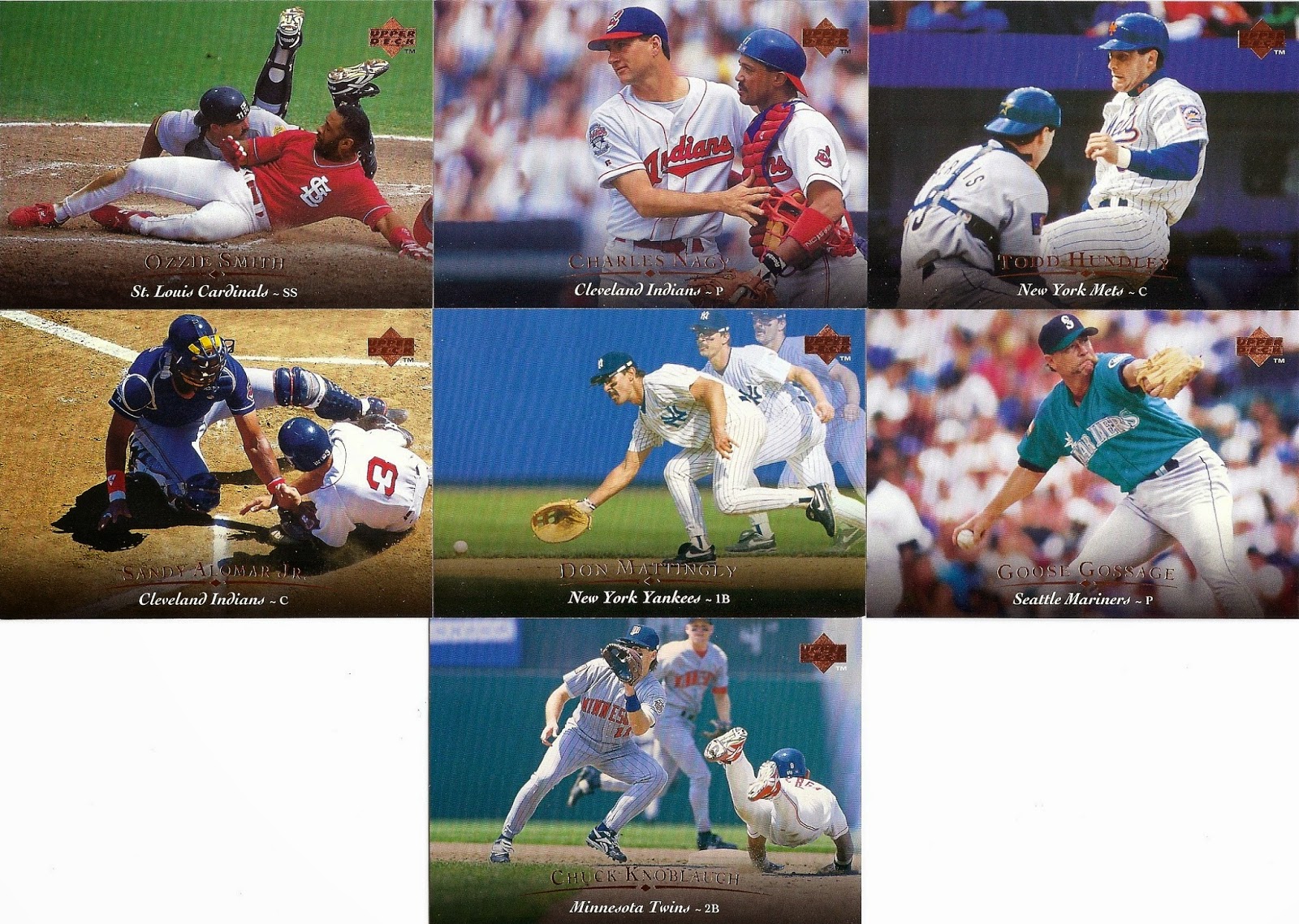 Even the backs got plenty of photo love: 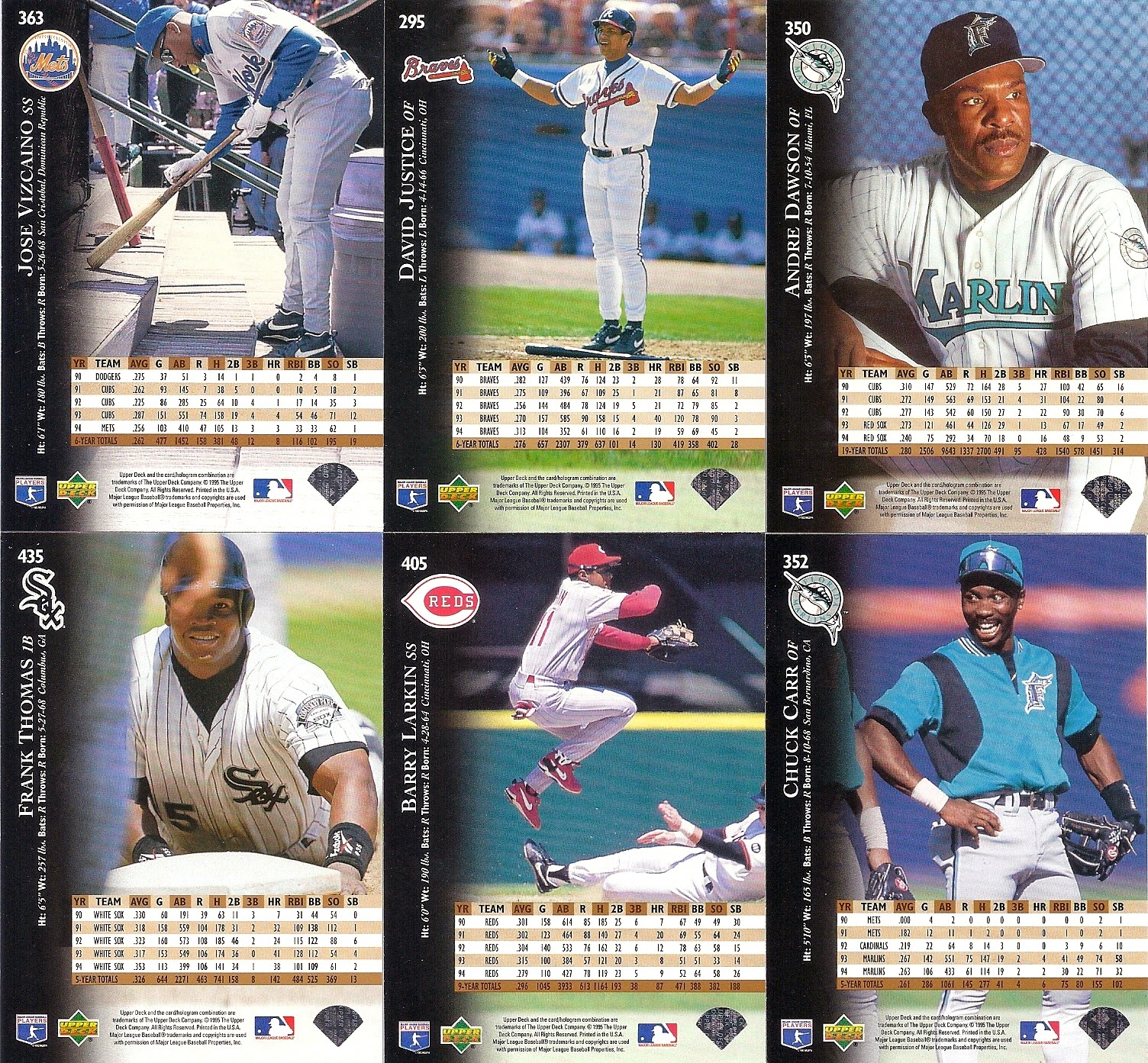 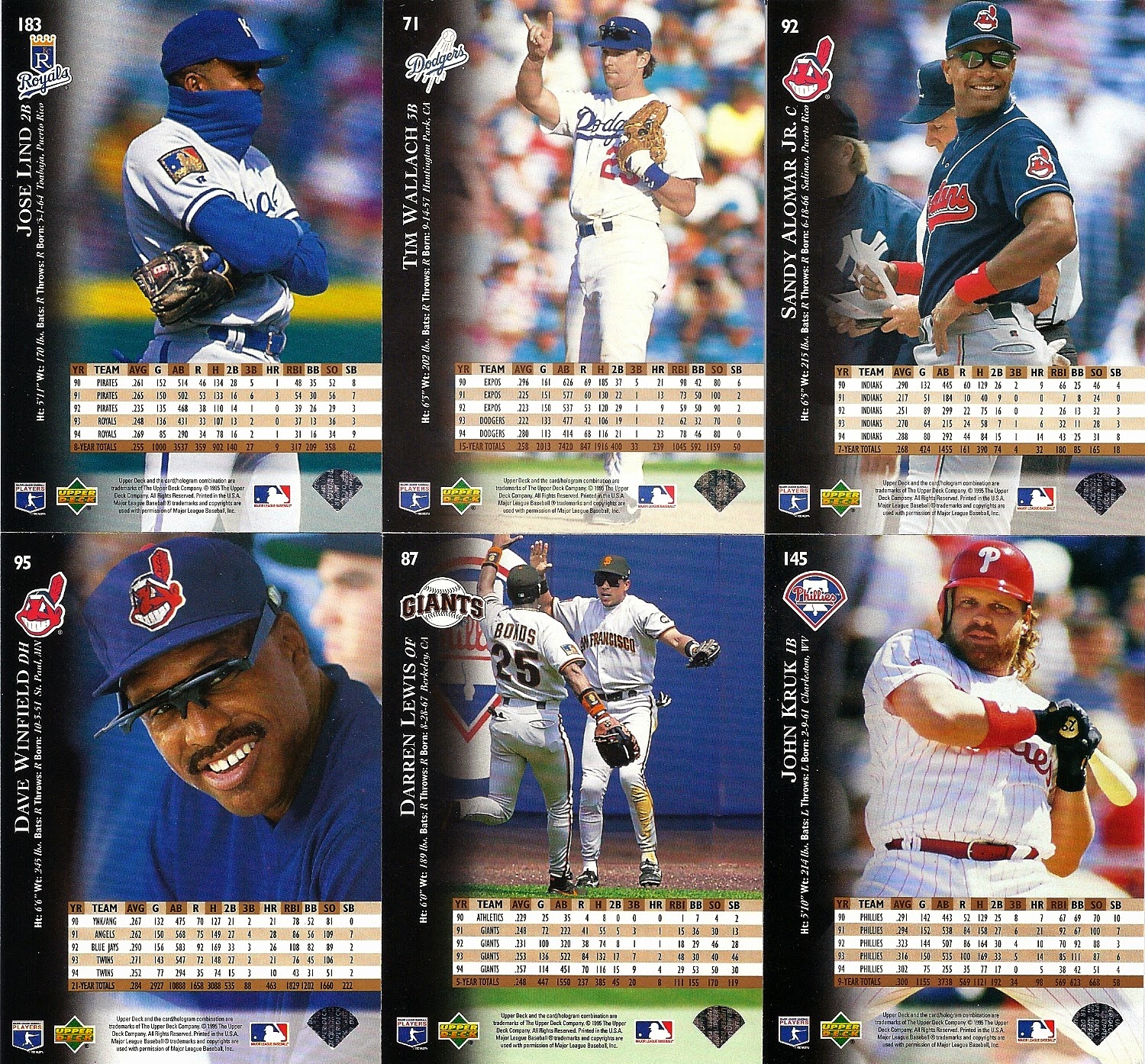 All those would make excellent card fronts.

There are a lot of repeated thremes in the set photography.  Here are a bunch of autograph shots: 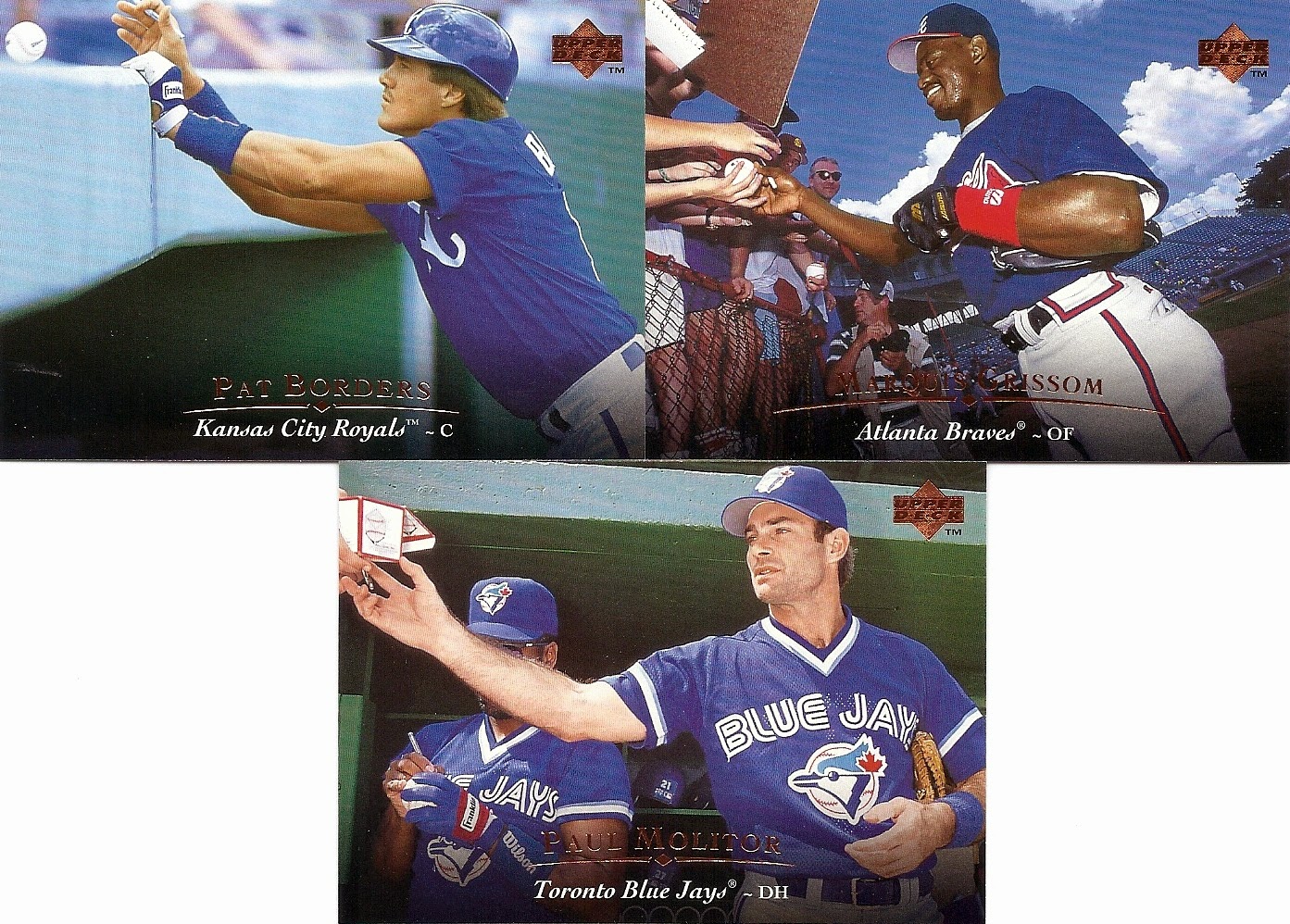 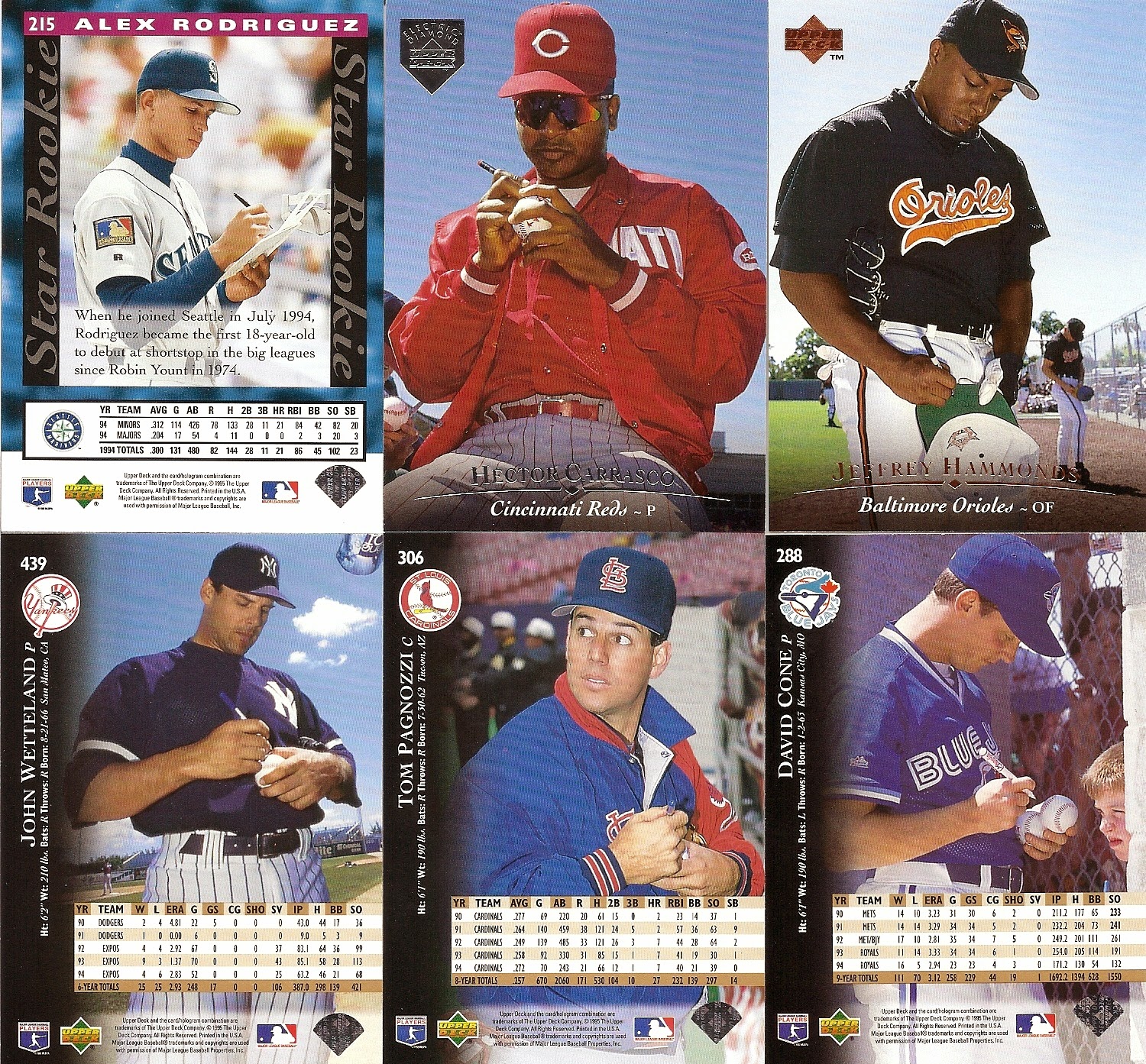 OK, so A-Rod might just be writing something.  Something cheater-y.  I still love that card.

Some nice interview cards, too, including one of the greatest ever made.  Can you spot it? 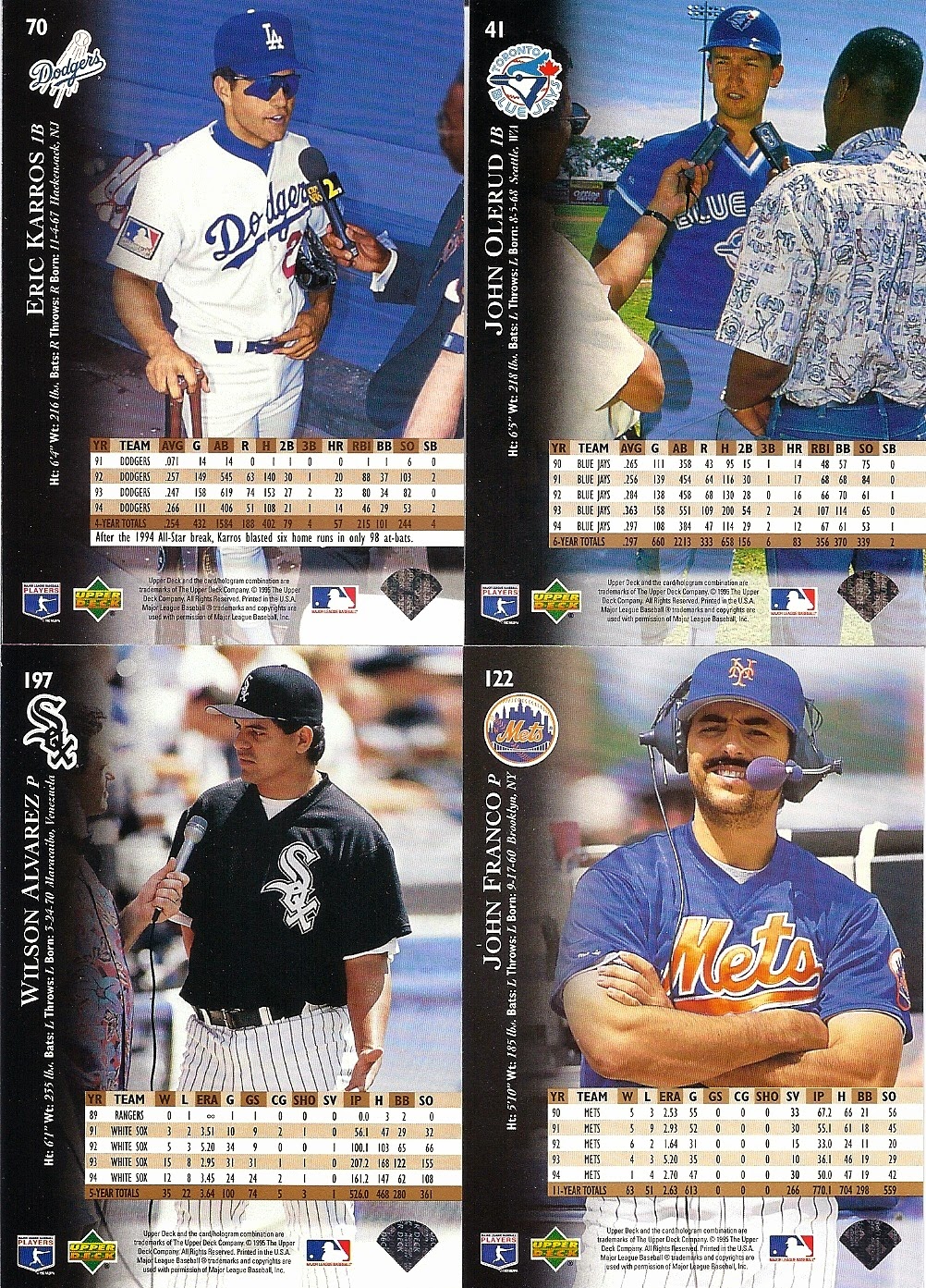 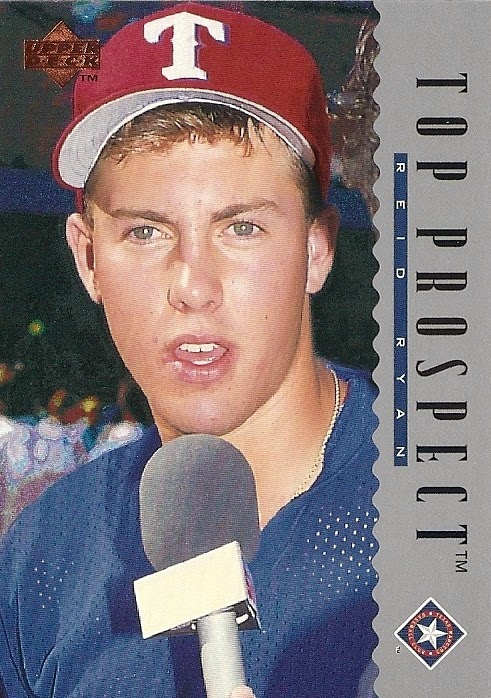 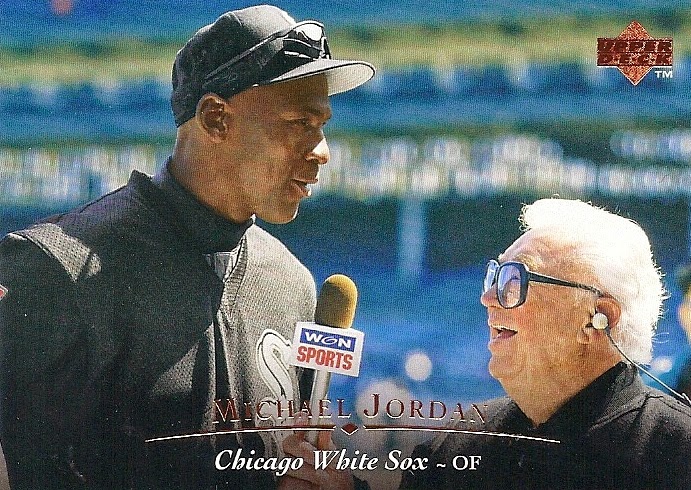 This set's got pitchers on offense out the wazoo, including my favorite Fernando Valenzuela ever (that's saying a lot - he's got a ton of great cards out there): 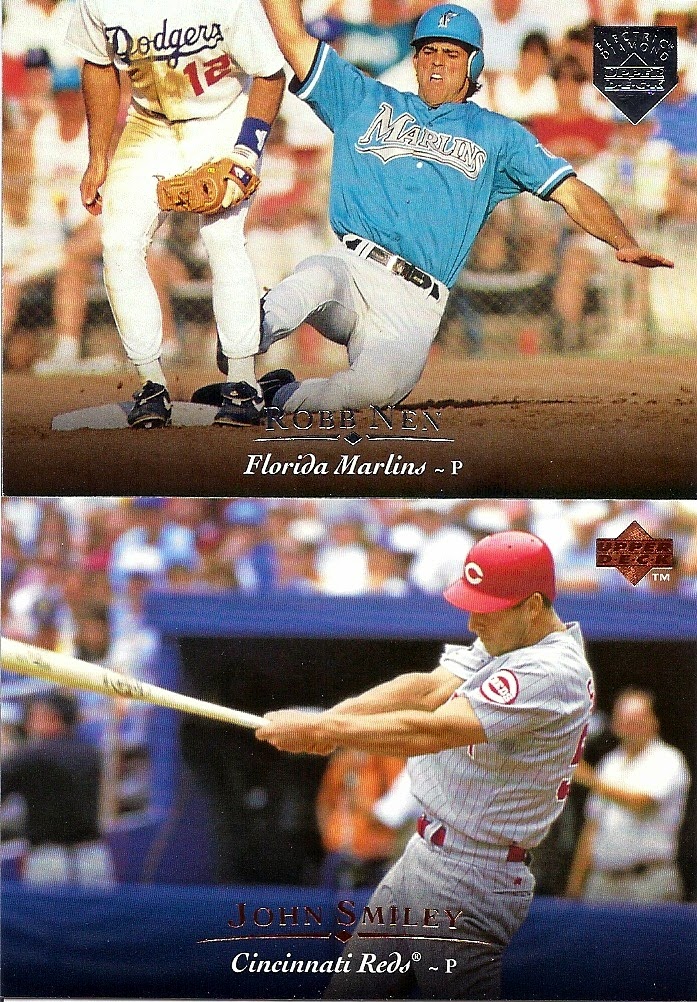 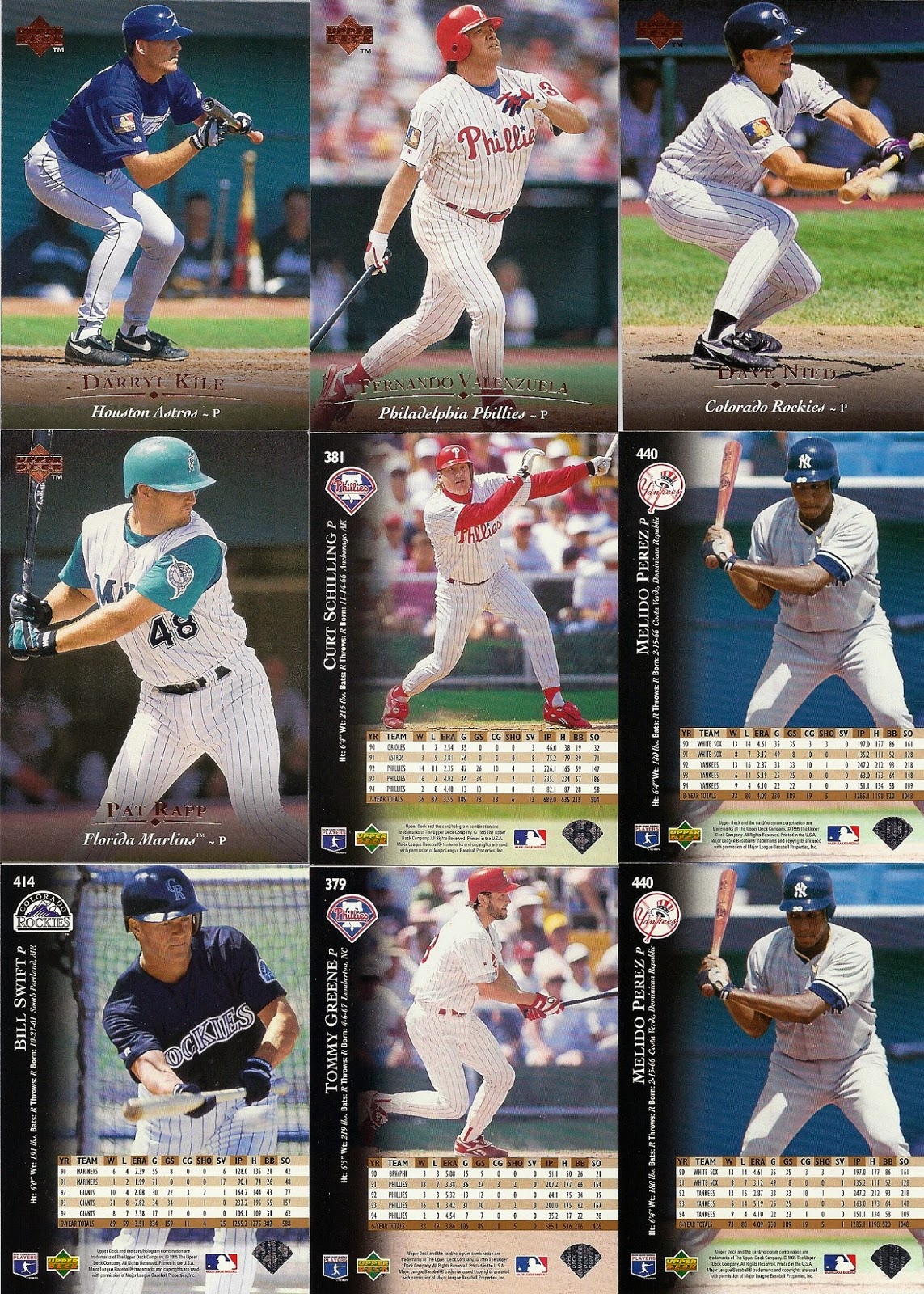 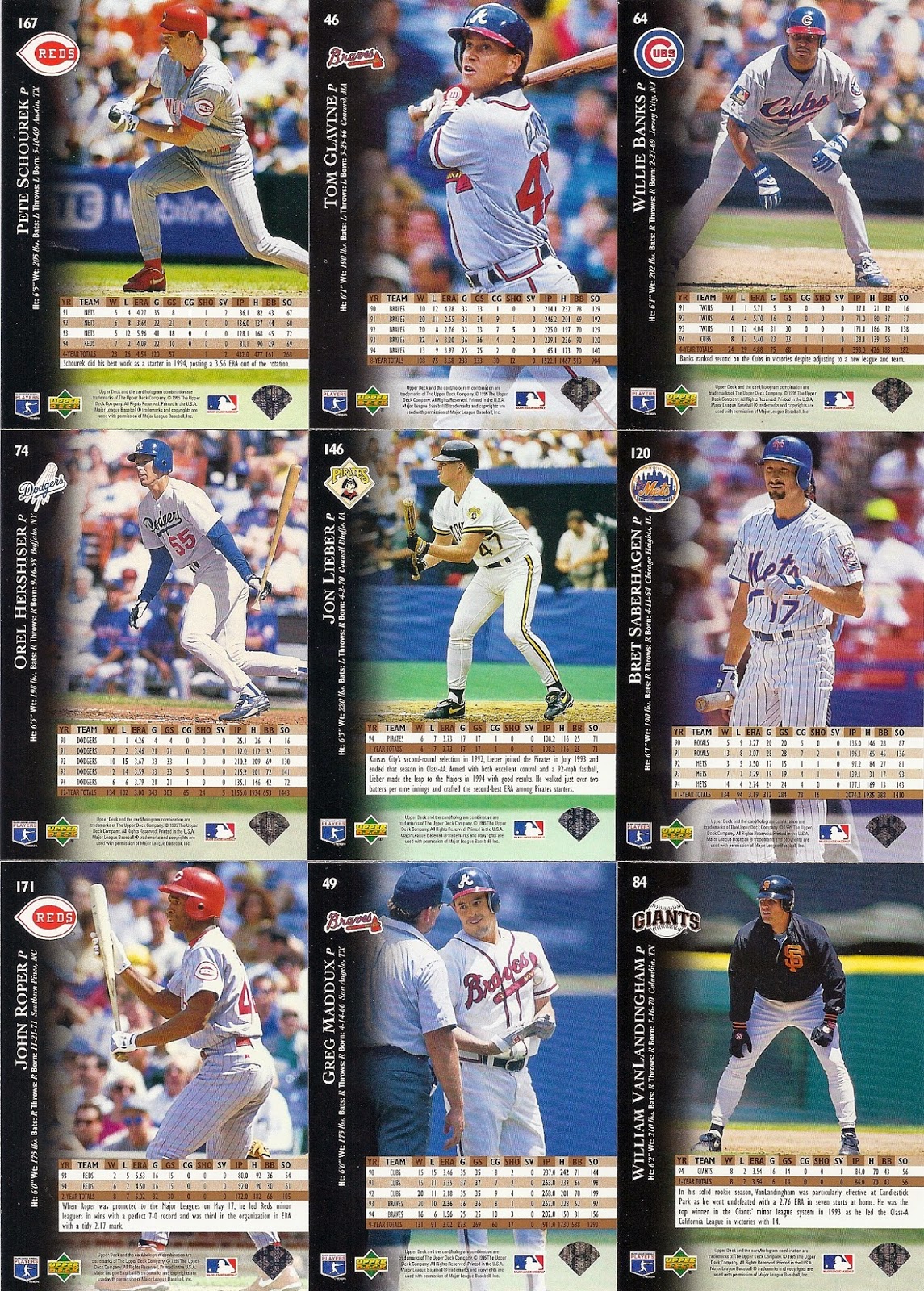 Hey, look what a nice day it was in Cleveland: 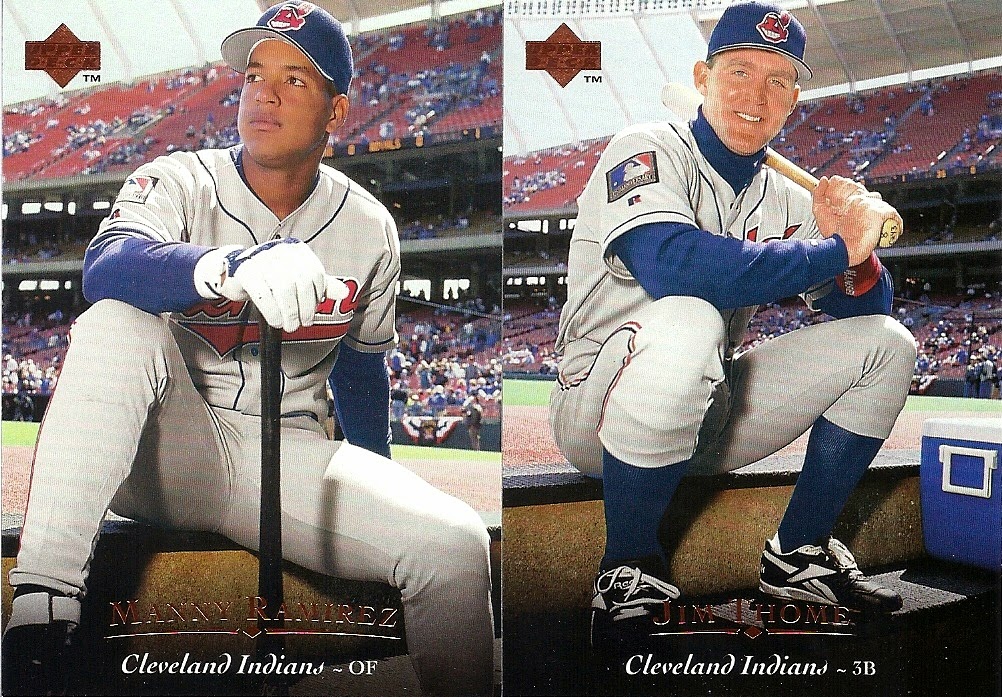 Here's a different kind of throwback for Frisco: 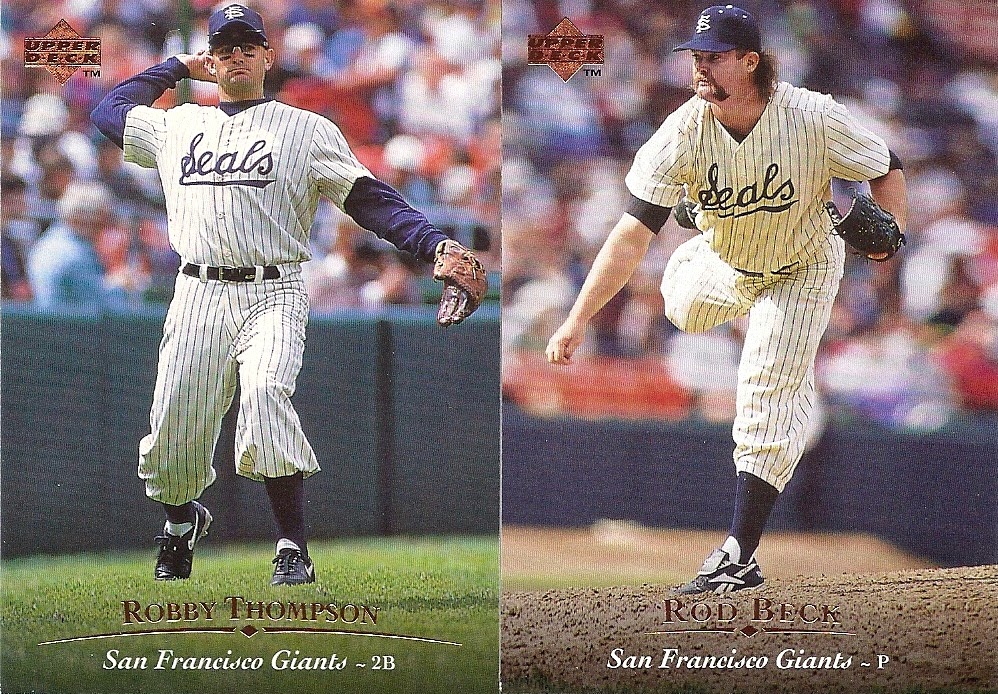 This fellow's helmet made the front and back of his card: 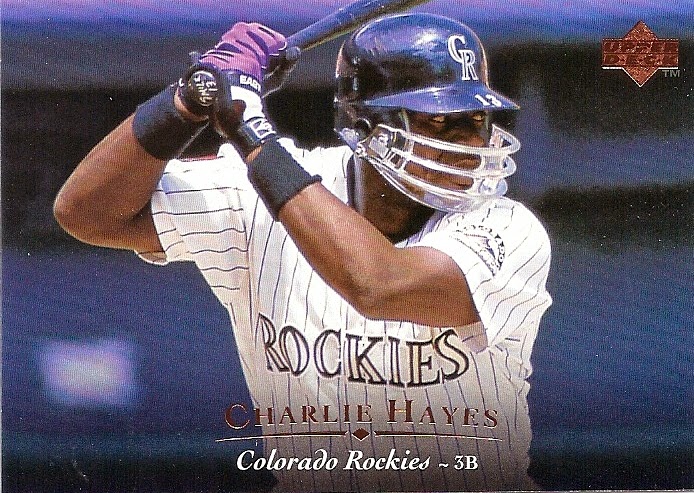 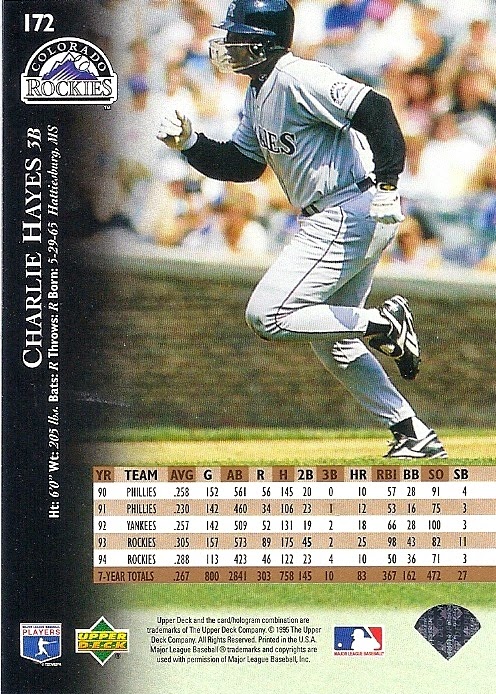 Then to top it all off, Upper Deck made a five-pack of amazing Final Tribute for the last five cards of the set. 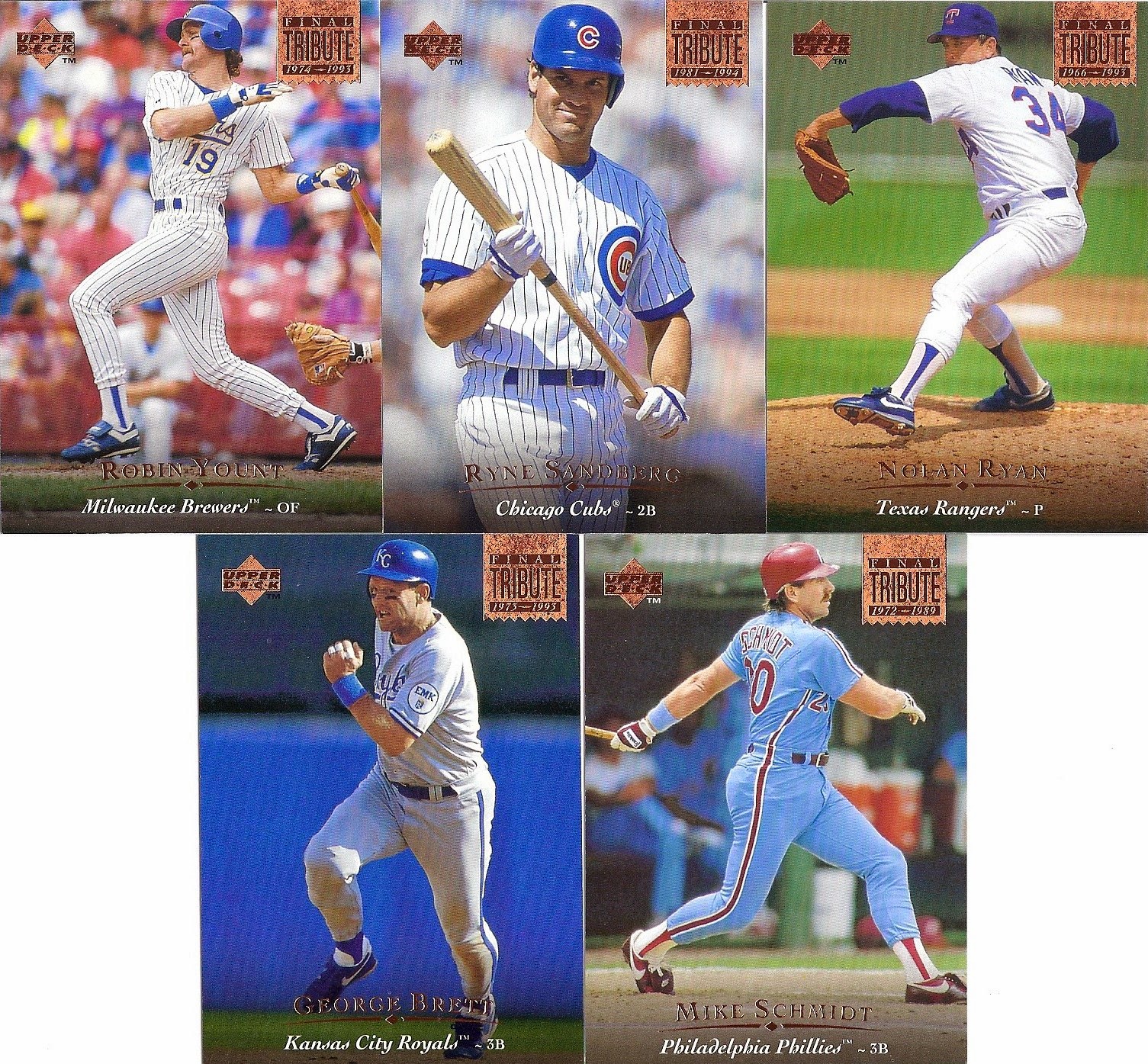 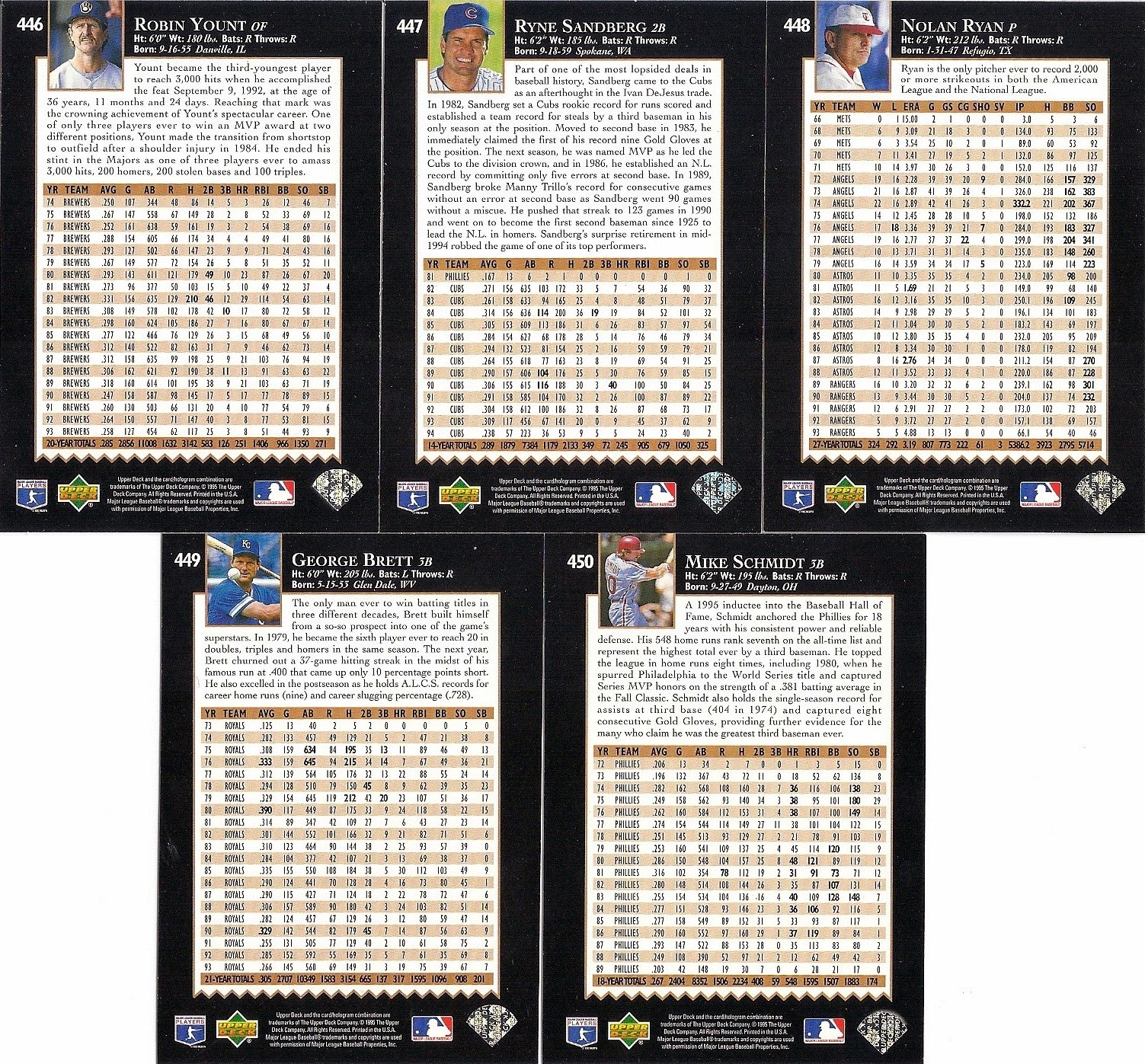 They absolutely nailed the card backs here, managing to squeeze in lifetime stats, a sizeable blurb, and even an additional color photo - and all this with a thick, tasteful border.  Perfect.

As much as I love these, though, my heart hangs heavy because GRIFFEY SHOULD HAVE GOTTEN ONE.  I like to think that had Upper Deck stuck around it would have happened.  Maybe I'll make one in MS Paint.

FYI, for the Electric Diamond parallels of these Final Tribute cards, they dropped the Final Tribute banner from the card front.  It's something I always wondered about, and now I know.  I'll show you one soon enough.

While they don't touch the excellence of the base set, the subsets are not too shabby, either.  Here's a few choice cards from each: 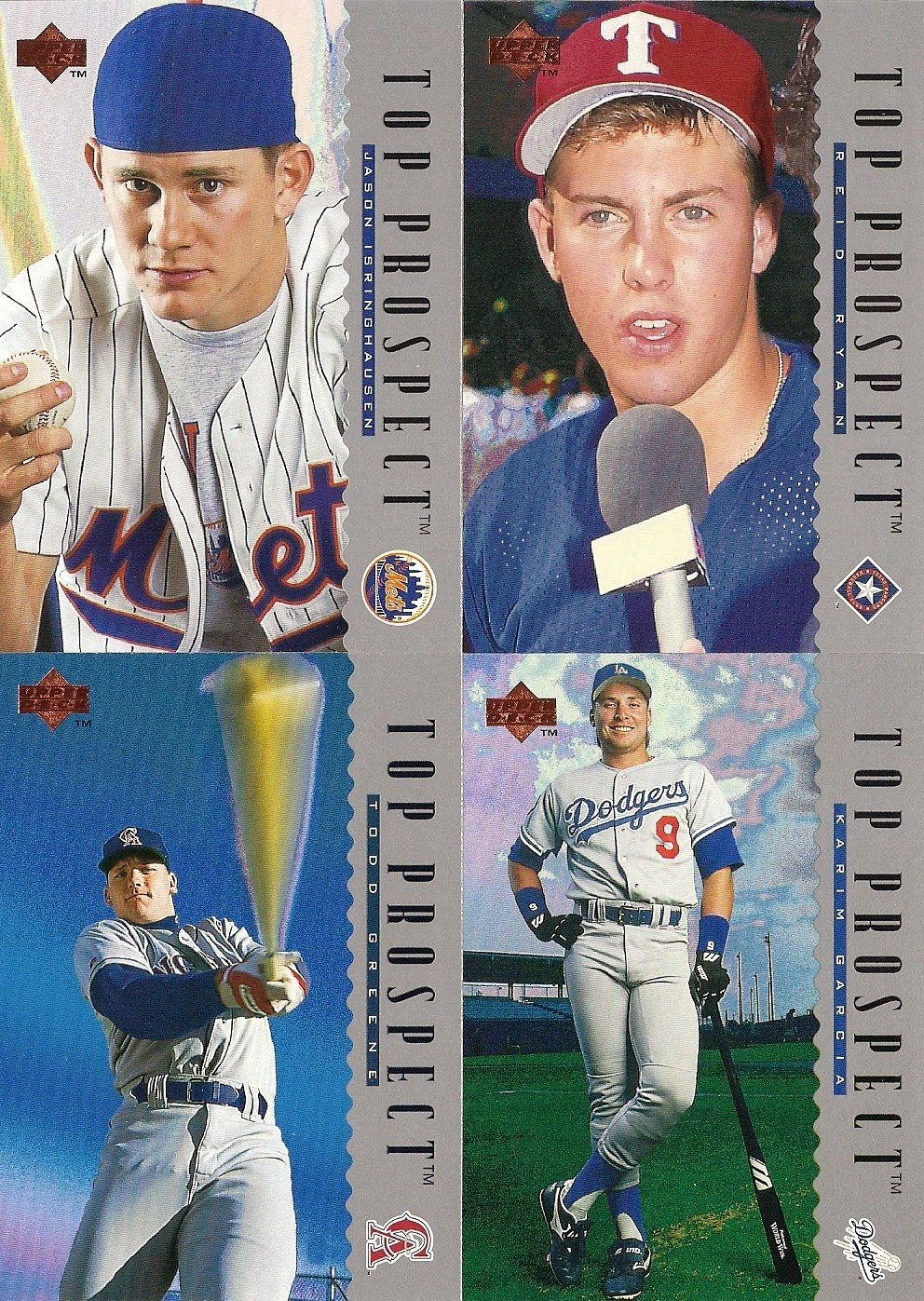 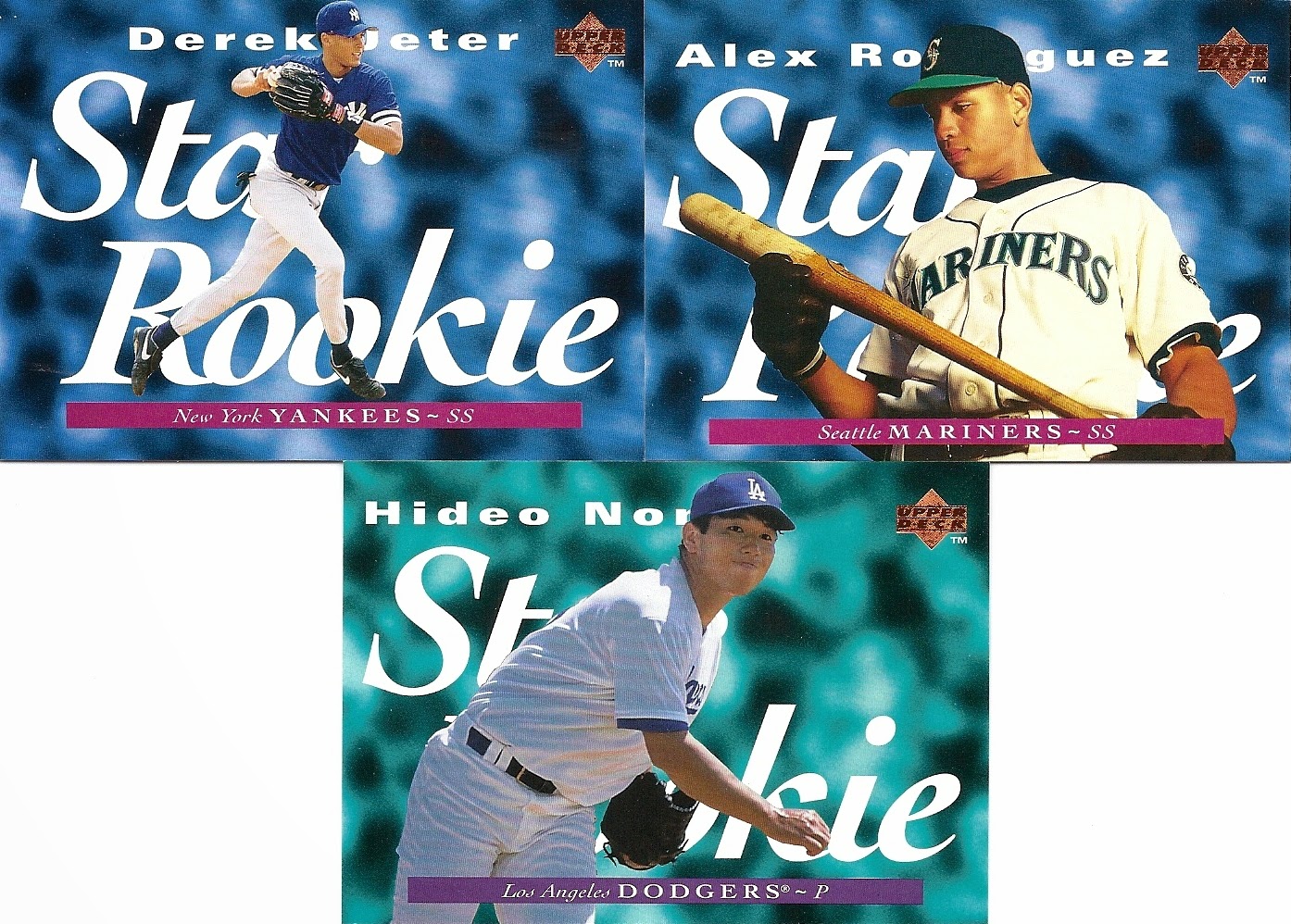 Another design for rookies, this subset ends series one and carries on into the beginning of series two.  It's an iconic design because of the solid checklist. 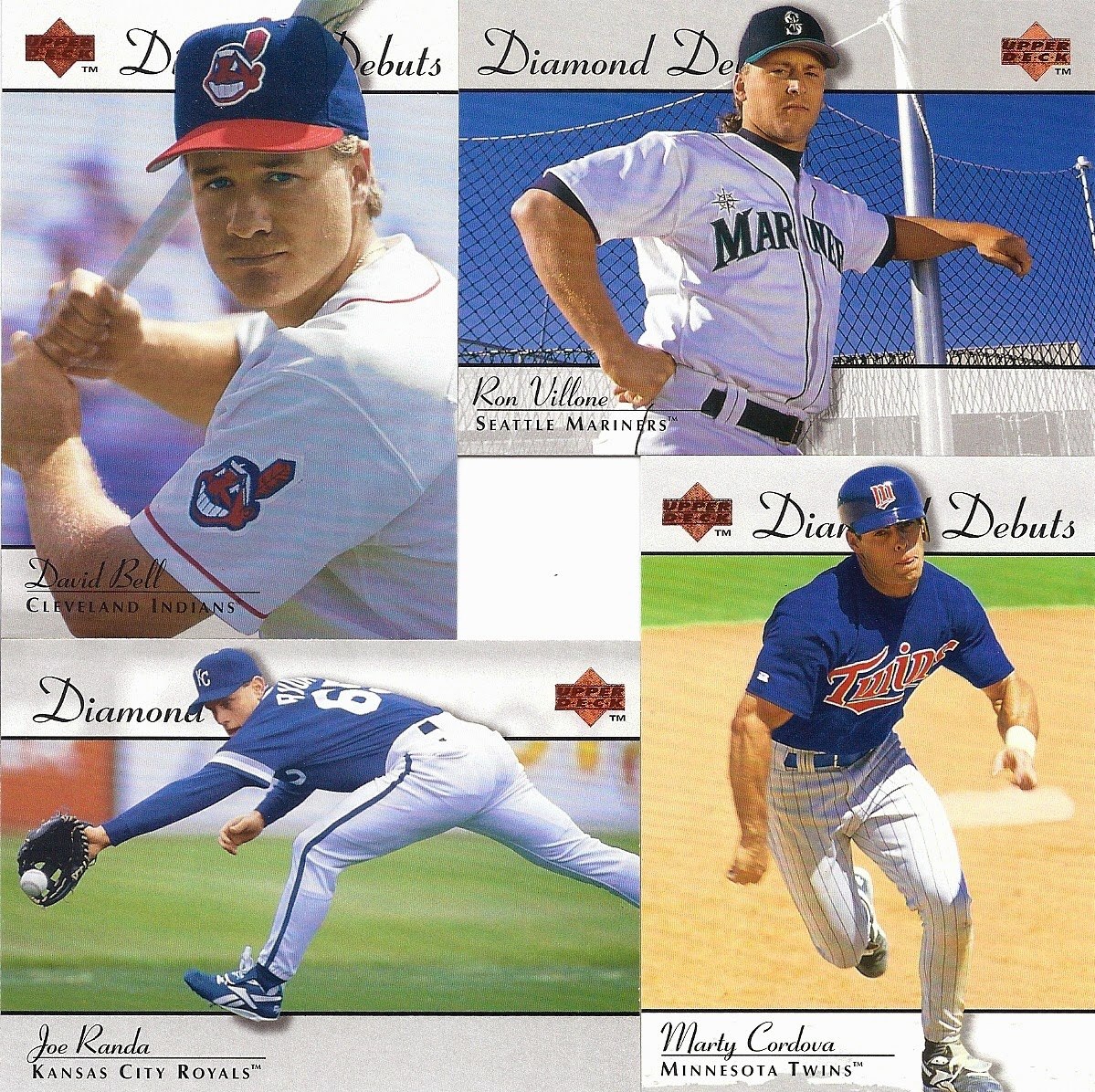 Yes, this makes three rookie subsets.  Sure, one is prospects, one is stars, and these focus on young players' major league debuts, but to a pack-busting adolescent they're all a bunch of rookie cards. 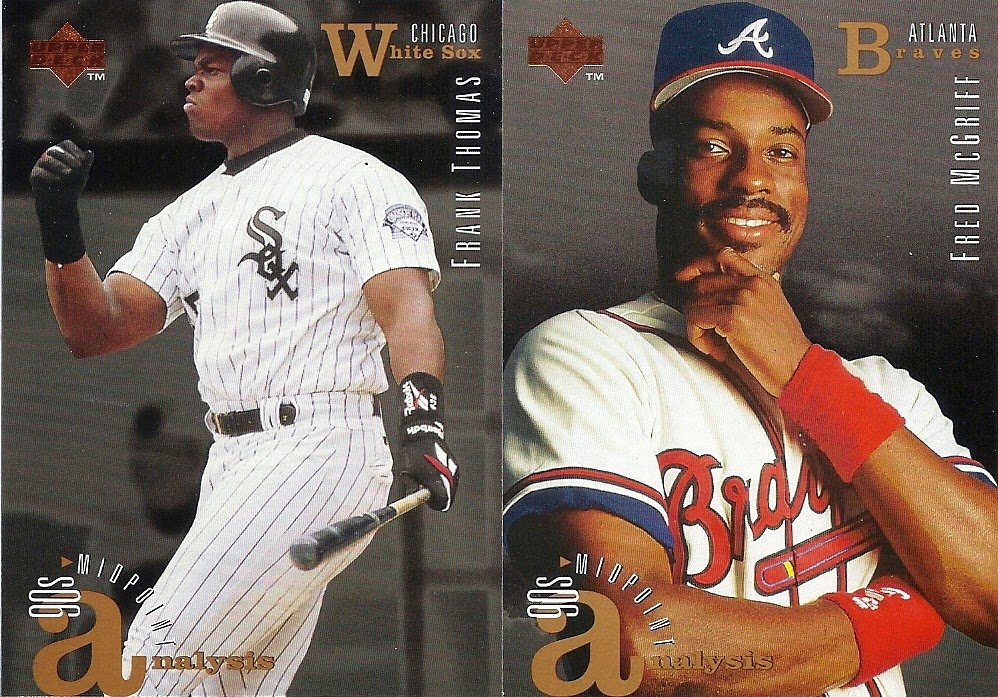 Of course the big stars of the 90's got their own subset which focuses on each guy's performance in the first half of the 90's.  The reverse-negative black & white backgrounds really make the photos pop.  Some nice one's in this set, but that Crime Dog may be my fave.

Nice subsets all, but the base set is the real star of this post.  Coming up next in Part 2, the contents of those two retail boxes.