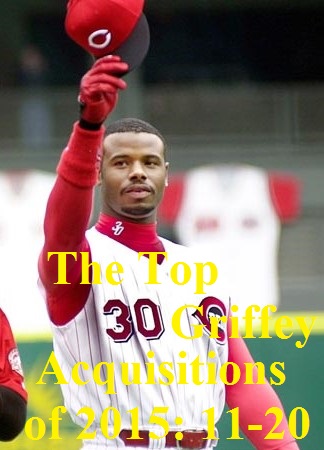 It used to be that a card simply having a Griffey autograph on it earned it a spot in the Top Ten, but not this year, pal. In fact, it wasn't just one Griffey auto that didn't make it into the Top Ten - it was FOUR. That's a travesty - how did it happen? Two words: 90's inserts. But we'll go into that a bit more when we get to the Top Ten. Here's #11-20: 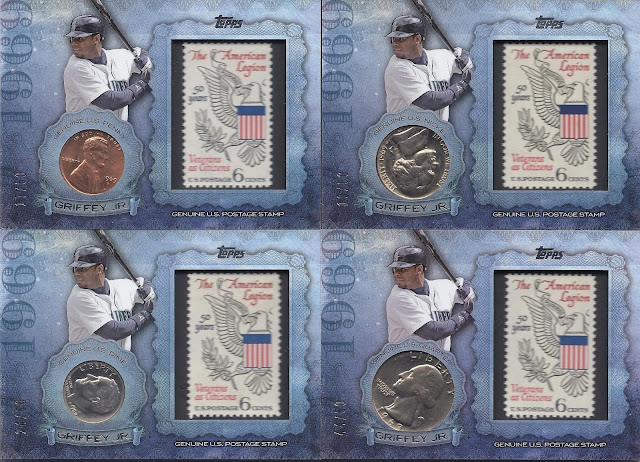 As soon as I landed the quarter and held it in my hands, I was hooked on these numismatic/philatelic combo cards. I’ve been a coin collector since I was little, and while I’ve never been a big stamp guy, the one they used for these cards is perfect. Lord help me if they bring these back for another year. 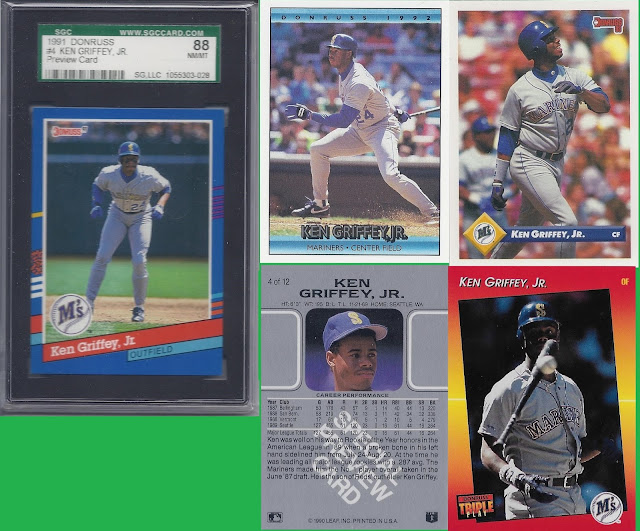 Previews (aka samples, promos) were pretty hot by the mid-90’s, and we have the Leaf brands to thank for that. These guys were all about sending previews of their upcoming sets out into the world, and they did so in very limited quantities. Upper Deck got on the preview bandwagon a little later as did most other brands in one form or another; but those first few years of previews beginning with the one for 1990 Leaf remain scarce and continue to command dozens of dollars apiece. This was the year I landed them all. 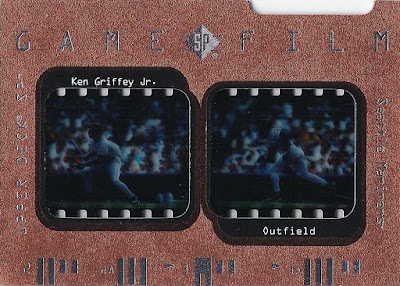 There’s a lot to love here. We have an early, low-numbered insert, a unique relic that also happens to be one of the first manufactured relics, and a little tasteful die-cutting. We also have a baseball card tribute to a dying format as film has gone more or less the way of the dodo. While a lot of film-themed inserts were coming out at this time from several brands, especially Leaf, this one is kind of their president. 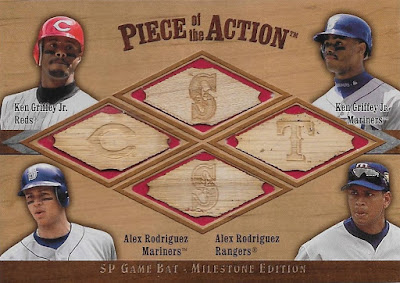 In Griffey collecting circles this card is known as the Griffey-Griffey-Arod-Arod or simply “The Quad.” Again we have several layers of cardboard cool: multiple relics branded with team logos, both players’ old and new teams are represented in both the photos and relics, and it was actually apretty sweet A-rod card before the recent unpleasantness. This particular one even has an upside-down Seattle logo on the top piece. Oops! 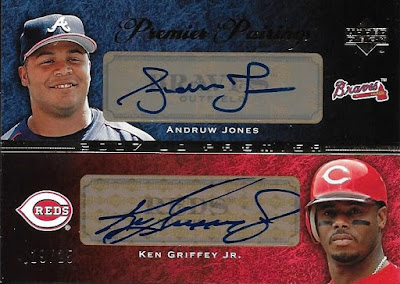 I won a contest last year from Matthew of the great Pirates-collecting blog Bob Walk the Plank. His face-melting Andrew McCutchen collection is the envy of PCers and supercollectors of all kinds. I was getting out of card collecting right about the time Andruw Jones was an up-and-coming rookie extraordinaire. I never thought I'd see the day that someone would send me both his and Griffey's autograph on the same card. Pulling this one out of the envelope took my breath away. Thanks a ton, Matt! What a great prize! (P.S. proper thank you trade post forthcoming) 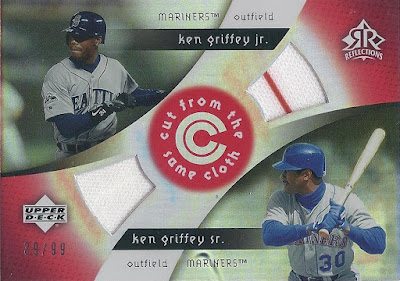 
There are a few Jr./Sr. dual autos to be had, but very few dual relics for some reason. This is the first father-son dual relic I found. It's a little off-putting, however, that this card shows both Griffeys as Mariners but includes a Reds uniform relic for Junior and a generic white one for Senior. I mean, as they did play at the same time for a while, Upper Deck could have shown them in similar throwback uniforms then given us gray swatches (even Cincy ones would have worked) and the card would have been vastly improved. Or hell, just show them both as Reds. I really love the card, but a lot of strange choices were made. Still, multi-generational dual relic! Gotta love that. 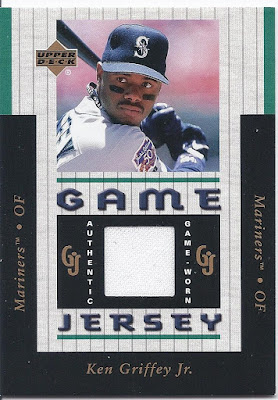 In 1997 Upper Deck broke baseball cards by giving us the first relics. Eight years later relics were pretty much the norm for hits, and it seems Upper Deck wanted to remind everyone who started the whole relic thing with this insert dedicated to another insert. While Topps and Fleer were all about vintage designs that reminded collectors of what they brought to the hobby decades before, Upper Deck was reminding us of what they did just a few years ago. These are unnumbered, but there are only 150 to be had which I think is the exact number there should be. Any more and they wouldn’t be quite as special. Oh, and fun fact: these are WAY more scarce that the real 1997 Game Jersey cards. 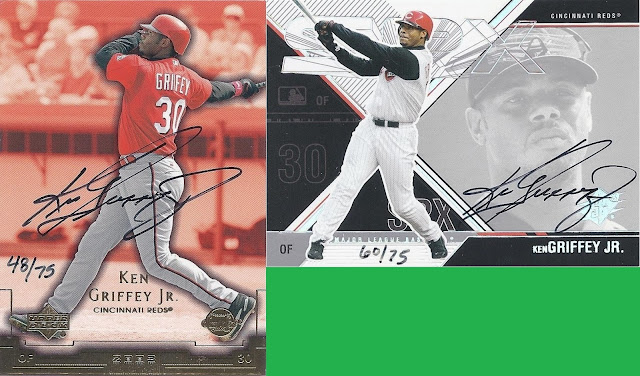 Junior signed a lot of cards in his time, and by the mid-2000’s there were Griffey autos in nearly every Upper Deck set. The availability of his autograph means prices haven’t held quite as well as maybe they should for a potential (now confirmed!) Hall-of-Famer. These two came up on eBay within a few days of each other in late 2015, and I put in low bids for each that somehow both won the auctions. The autos are pretty, and being buybacks they’re also hand-numbered. I'd like to see more of these on even older designs. 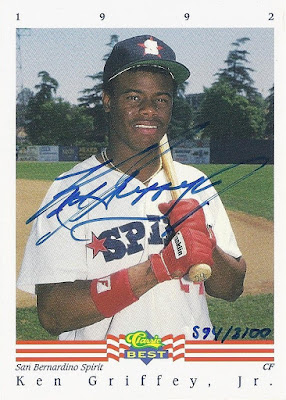 I read a story once of a collector who pulled this card from a pack of ’92 Classic he’d gotten at a card show for a quarter. I can’t say I was so lucky, but I can say that someone listed this card on COMC at a far lower price than they should have, and I happened to be the lucky Griffey collector who discovered it. Maybe he was desperate to move some cards or had a white whale he needed the credits for, but it couldn’t have been up for more than a few moments before it was in my pending shipment. As you can see this is back when Junior used to underline his name with the tail of the Y in Griffey, something he stopped doing just a year or two later. Also, can you imagine sitting down and signing your name 3100 times? That’s almost as bad as closing on a house. 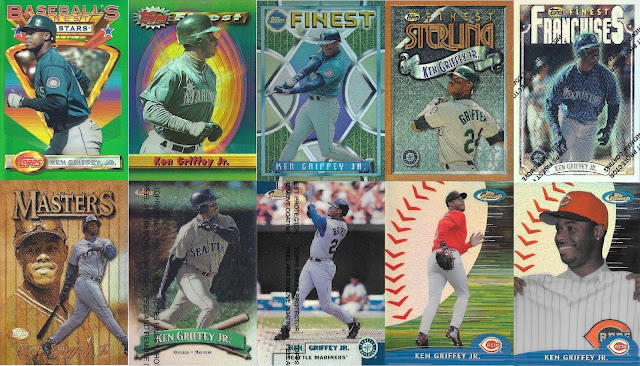 Back in 2013 when this list was only ten cards long, the top spot went to a card that I’d drooled over since I was a wee lad: the 1993 Finest Refractor (which I threw into the above scan for good measure). This year I took that a step (er, several steps) further by acquiring nearly every other Finest base refractor from the 90’s and 2000. Of these cards, the 1994 and 1995 were far and away the hairiest gets, comparable in rarity with the 1993 card. For the 1995 refractor, I sacrificed the card having its surface protector for above average condition and centering, a rarity for the often off-center 1995 set. I’m showing them as a group, but to be fair the ’94 and ’95 cards could have had their own slots in this countdown. I'd also like to mention that while some of the colored refractors in later Finest sets are really cool, I do miss the days when there was just one and it was rare as butt. Those were the days.

Tomorrow's the big day! We're winding down, now, but we should be winding up because it's only going to get crazier. Get ready for a frenzy of amazing 90's inserts and some killer autographs. And thanks for reading.
Posted by The Junior Junkie at 8:00 AM