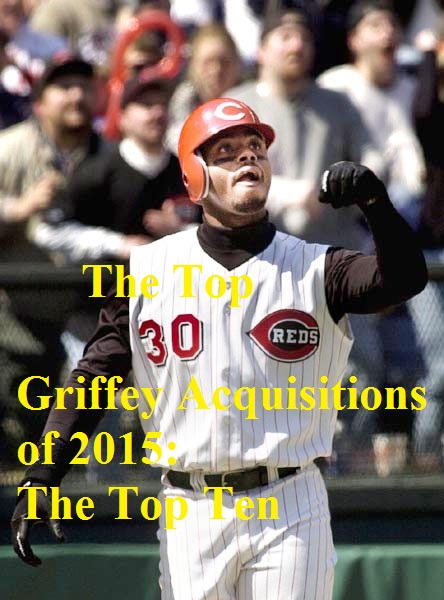 I've waited months to put this list together. Frankly, I'm still wondering if I got everything in its right place. Doesn't matter - here it is. I finished 2015 having added 717 new unique Griffeys to the collection, but had I added only these ten, it would still have been my biggest year ever. Grab a towel: 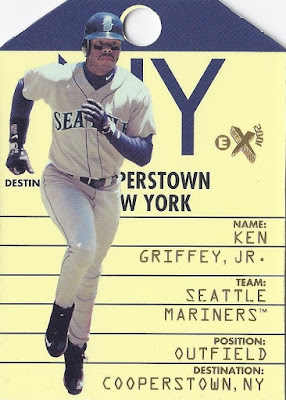 I hope you like extremely scarce 90’s inserts because this list is full of them, and few are more rare than this guy. I did some math, and based on perfectly reasonable estimates where needed, I proposed a guess that there are roughly a hundred of these floating around. That's super rare by 1998 standards. Of those hundred, I have to wonder how many have their original string? 'Cause mine does! 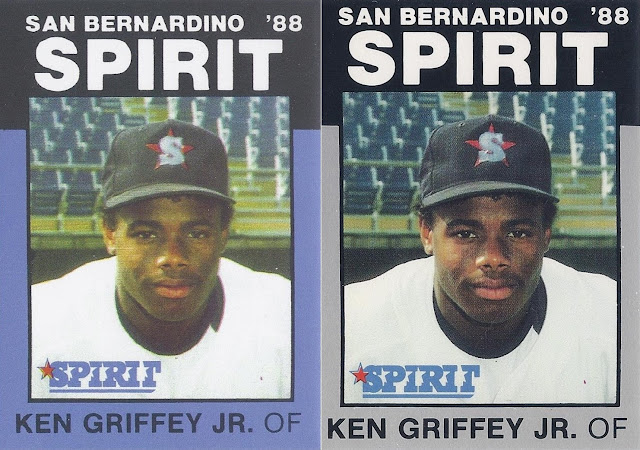 As Junior’s pre-rookies go, these are the ones you want. The blue regular version is not all that uncommon, but that platinum version can get hella-‘spensive, even with 1300 of them to be had. Given the history and, well, blatant exploitation via parallels of Griffey cards that would happen over the next almost thirty years, how perfect is it that even this, the first Griffey card, has its own pricey parallel?

The card design here speaks for itself. I’m just going to throw some numbers at you. The regular insert (right) is 1:288 packs. The Gold Medallion parallel (left) is ten times rarer at 1:2880. The ten cards in the insert bring the odds of pulling the Griffey Gold Medallion to 1:28,800 packs. Today’s pack odds with their 1/1’s and #/10 patch autos have some astronomical odds, but back in 1996 these cards may as well have been made of gold. No patches, no autograph, and yet without a doubt one of the toughest-to-pull inserts of all time. 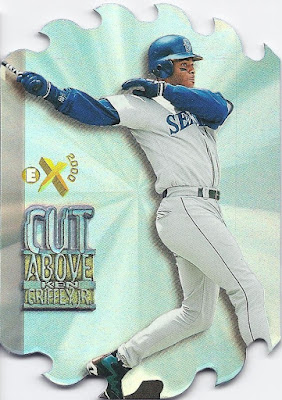 Sure, Hitting Machines was cool, but it wasn’t big, shiny saw blade cool. This bad boy set the bar for die-cut cards for years to come. Even now, 19 years later, collectors look back at this insert wistfully, yearning for a simpler time when decent hits were super badass inserts with crazy, envelope-pushing designs instead of the simple, soulless white or gray jersey swatches or sticker autos of some rookie you don’t recognize and probably won’t hear from again. Even with a print line I love this card more than any relic or auto I’ve pulled in the last ten years. 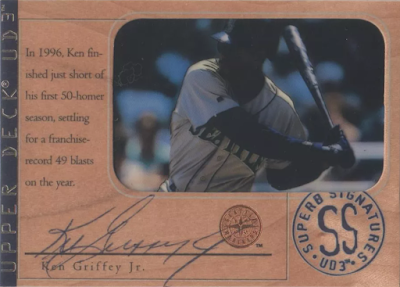 The difference between Mariners autographs and Reds autographs is night and day in both price and availability. What you're looking at here is simply one of the greatest Griffey autos you can get. It's super early for an autographed insert, it includes a unique combination of wood grain and translucent film, and the auto itself is in blue ball point pen. It's so plebeian, like he was signing a check to pay the gas bill. The only other cards signed in pen that I can think of are Sweet Spot with their bits of baseball embedded in the card, but those all came out in the 2000's when autograph hits popped up in nearly every box you could buy. This one here is something special and a true trophy in its day. 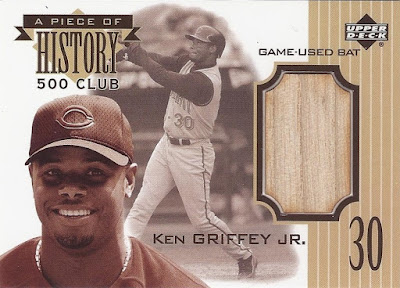 There are a few relic cards in this list – there’s even one I ranked higher than this – but this Upper Deck issue commemorating Junior’s entrance into the 500HR club is my personal favorite. It’s not just a perfect, timeless design – these puppies are scarce. It is said there are 350 copies of each card; but as these are popular among both Griffey collectors and set builders alike (it really is a beautiful set), I believe the majority of those are parked in collections somewhere. I like to think that someday I’ll have the #/25 autographed version someday; but one sold just this week for $4555.00, and I can’t imagine being able to hide that little splurge from my wife for long. This one’ll do for now. 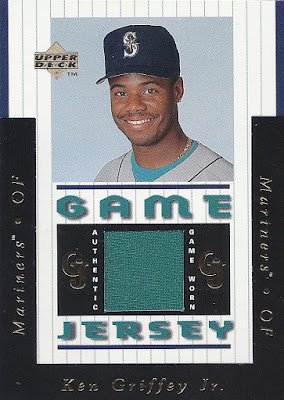 
What serious Griffey collection would be complete without the world-famous first-ever baseball card relic? Upper Deck hit a home run with this issue as it’s not only the first of its kind, it’s also one of the greatest relic designs ever printed. It just barely edges out the Piece of History relic at #5 because of its significance in the hobby (and for that lovely 90’s Mariners jersey green). 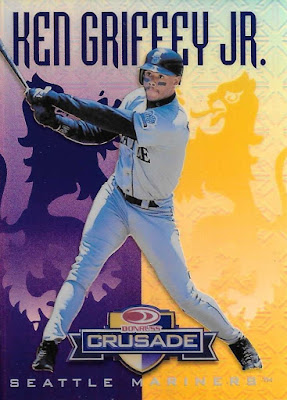 If you’re a 90’s collector who doesn’t read this blog regularly, you’re probably pretty surprised to see this card ranked so low on this list. Or you might be surprised to see it at all - there really aren’t very many of them floating around (there are supposed to be 100, but where are they??). Still, it’s my favorite version of my favorite player on the undisputed king of 90’s inserts. Despite the fact that the red, limited to only 25 copies, comes up for sale only once every few years and sells more like a 1/1 when it does, I’m still perfectly content with the purple version. Actually, content is the wrong word. Ecstatic – I’m bloody ecstatic about it. How it’s not at the top of this list speaks to the sick cardboard still to come.

So you may or may not remember that at the end of my Top 30 Acquisitions list last year I made a not-so-subtle remark that 2015 would be the year I finally landed a Griffey/Mantle dual auto. I even made this picture to go with it: 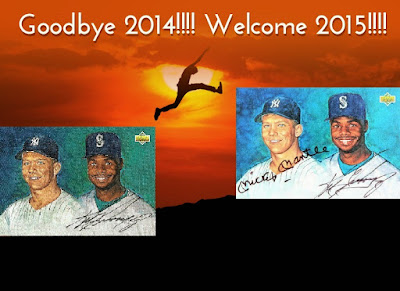 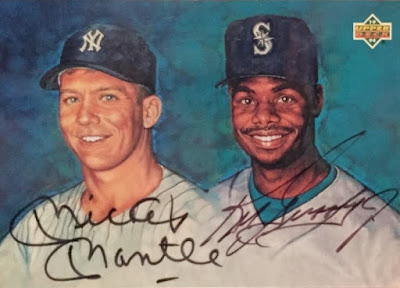 This is my Griffey/Mantle Dual Auto. There are 999 others like it but this one is mine.


It was beautiful from the start. Then Mickey freaking Mantle signed it. Then Ken Griffey freakin’ Jr. signed it. Now it is no less than a piece of honest-to-goodness baseball history of the highest order. In James Earl jones’ voice, it is a reminder that all once was good…and could be again. Sure there are 1000 of these guys floating around, and at any given time you can find half a dozen or so for sale on eBay, but those sellers are fools. Every one of these cards is priceless.

I even took it out drinking once.

Now, I know what you’re thinking: how is this not #1? Your query is just. While it’s true you are looking at one of the greatest baseball cards everzzz, the final card in the countdown is just…well…ridiculous. A dynamo. Larger than life. Better than all the things.

And here it is: 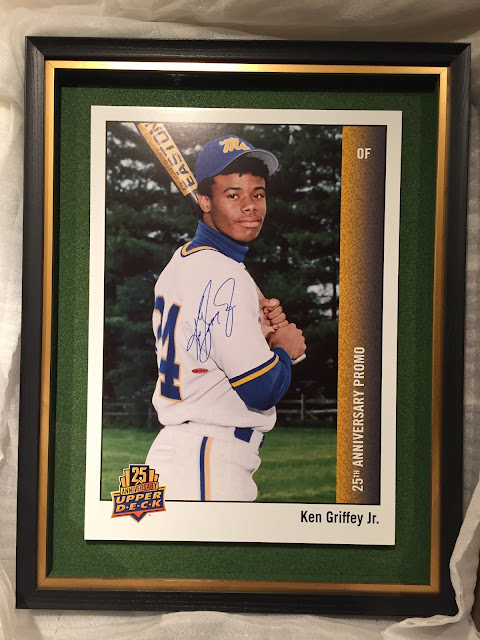 
The Buddha tells us that joy comes not through possession or ownership but through a wise and loving heart. Well, Buddha needs revision. I can tell you that joy comes two ways, and one of them is through giant autographed Griffeys. How do I describe my feelings towards this card? I guess I can say that for me it transcends the cardboard realm into a place where I can scarcely even call it a collectible. It’s simply one of my favorite things – a new family heirloom I’ll be able to pass along to my son. Or be buried with – we’ll see.

In addition to being one of the rarest Griffeys I’ve ever owned (only 25 copies were signed), this card is also the most difficult to obtain. Like some of the greatest things life has to offer, it cannot be bought – it must be earned. The nice folks at Upper Deck sent it in recognition of my myriad #WalletCard exploits while aurora-hunting in the Yukon and at Mardi Gras here in New Orleans. It absolutely blew me away the night I got it in the mail, and it hangs proudly in my office beside my desk where I look at it often. If there is such a thing as love for an inanimate object, then brother, I’m in it.

That's the list, fellas. In two months I'll have a newborn, a total lack of sleep, and a perpetually empty wallet. That's okay, though - I had my best year ever...by a lot. I can take a break. Next year's list has already begun, and it's got some neat stuff, too. I'll be happy to show it to you when the time comes, but it won't be anything like this monster - not by a long shot.

Thanks for reading.
Posted by The Junior Junkie at 8:00 AM