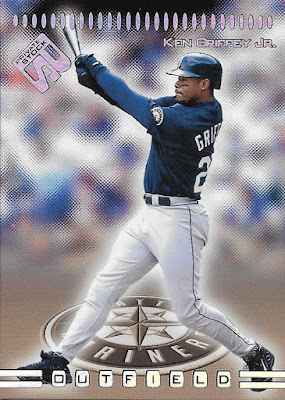 The ever-innovative Pacific brand, which I miss with all my cardboard-loving being, gave us the very first modern tobacco-style minis in this 1999 set. At one per pack, a model we see from several Topps brands nowadays, these parallels maintained the modern look of the base card on the front but with a decidedly vintage back design. Parallels of these minis are the only Griffeys to be had apart from the base card despite a homerun-themed insert that is suspiciously devoid of the Kid.


The base design is heavy-handed, but typical for Pacific. It’s got the overly-edited sheen of a Spanish soap opera. We get a shot of the Kid just wrapping up another perfect swing that more than likely sent some poor sap in the outfield all the way to the warning track only to watch the ball sail far over his head. You heard it here, folks: Griffey is good at baseball. 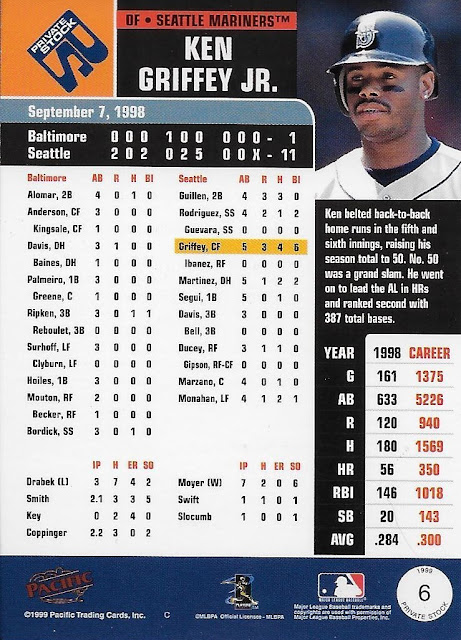 The back is the star of the show. Pacific broke cardboard again by giving us a large, single-game stat box from a night when Junior’s game was truly on fleek. Two home runs, the second a grand slam and number 50 on the season. We also get to see which Oriole pitchers lobbed those meatballs, Smith on the first dinger, and Jimmy Key on the Grand Slam (after which he was apparently taken out immediately). Tough night, guys.


These must have been confusing to young collectors who had never seen a tobacco card. Now they’re a household name thanks to Ginter and Gypsy Queen, but back then pulling a smaller version of the base card that maintains the modern design of the regular cards was probably pretty weird. 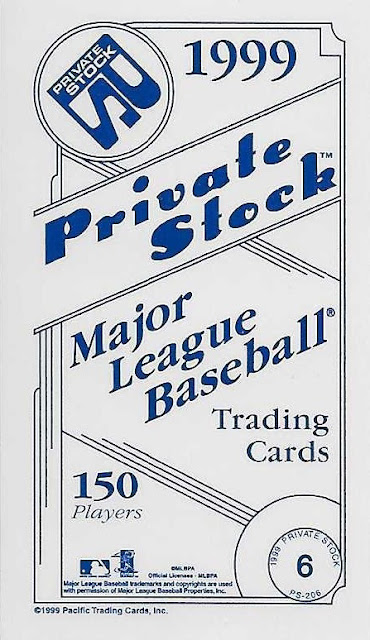 They did a great job on the back, though. Vintage fonts, borders, and hatching round out a pretty solid first attempt at recreating a tobacco back. This one uses blue ink where the next level of parallel uses red. From there I couldn’t even tell you what the back begin to look like - only that they are different somehow and serial-numbered.


The lone insert in this set is Home Run History, and it includes numerous cards of Sammy Sosa and Mark McGwire as they battled it out to beat Maris’ record. The final card in the insert is for Cal Ripken. Now, I realize that Junior was not as much of a contender for the record towards the end, but at the beginning he was the biggest contender and the one I thought most people were pulling for. I’d like to have seen him get at least one card in this insert, especially given that they gave one to Ripken who, while he would eventually retire with 431 home runs, was not even in that conversation. This is a rare gripe from me about a Pacific product.


Here are the Griffeys I still need from 1999 Pacific Private Stock, all mini parallels:

Unfortunately Pacific Parallels are harder to come across than Waldo in a barber pole warehouse, so I’m in no hurry to find these.

Thanks for reading!
Posted by The Junior Junkie at 8:00 AM