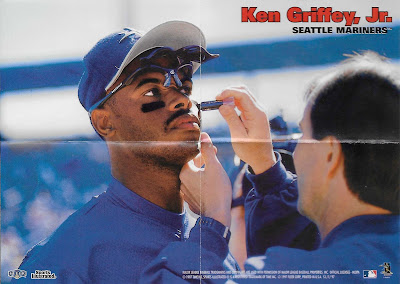 Right when baseball cards were at their coolest, Fleer made a deal with Sports Illustrated that resulted in three years and six sets of above-average photography and cool magazine cover subsets; and they all started here. I am just a massive fan of Sports Illustrated cards. I’ve even considered going for the set build, a very rare feat for a player collector such as myself. It’s that good.


Sadly I don’t think Sport Illustrated’s foray into cardboard got the recognition it deserved. When I think of trends in the hobby, I think of the early 90’s being all about high-quality photography, then trending towards new printing methods and visual effects as the decade wore on. This is, after all, the year of the first baseball card relic and the legendary E-X2000 Cut Above insert. By the time SI got to the market with cards rooted in their unparalleled access to magazine-caliber photography, everyone had moved on to new card materials, intricate die-cutting, and refractors, refractors, refractors. Fleer's Sports Illustrated brands seem to have been a bit overshadowed by all the envelope-pushing lunacy of late-90’s inserts. That’s too bad.

Let’s start with the base card:

The subject of this particular card is the prototypical Junior home run turn, and we get a view of his entire face as he does it. You can tell from the power displayed in his posture here that that ball is hurting. It’s the home run mechanism that is the Griffey in perfect alignment. 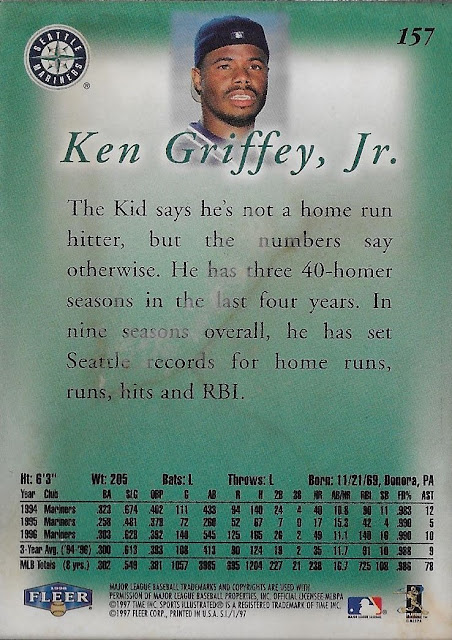 The back is simple, too. The background is made up of a large rectangle bordered in reversed green-white shading that looks great but that is easy to miss. There’s also a lot of negative space - they probably could have gotten away with more stat box - but you’ve got to love the portrait on top. That’s the face of a man who’s watching “Mulholland Drive” for the first time. 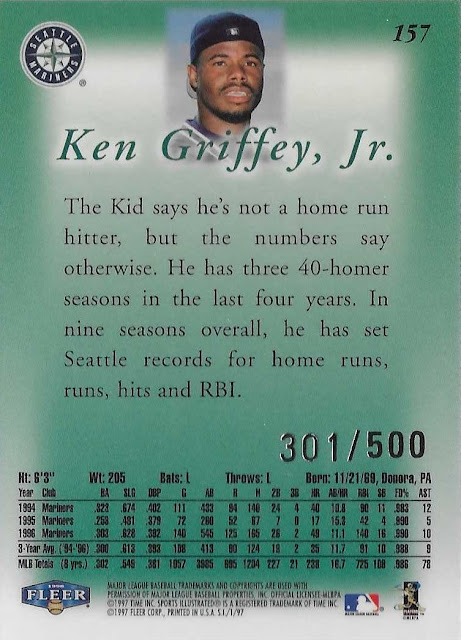 A #/500 parallel in 1997 is like a #/50 parallel today. Serial numbered cards were still new, and now almost twenty years later tracking some of these down can be a real test of one’s resolve and pocketbook. This particular parallel is not all that fancy, though, so prices remain low relative to other low-numbered parallels from this time.


Here is a subset we’ve seen before but with a great image of Junior at the top of his swing. From the angle of his gaze I’d say that thing is on its way to orbit because Griffey.

The design is simple: border lines against a white background. Again, the photography does all the talking. Personally I prefer the back: 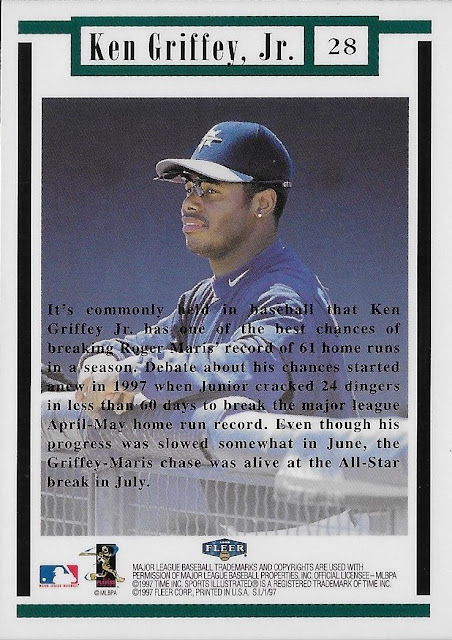 They used a large candid photo with a slight color fade as the text box here, and it fills the card back nicely as you can see. The blurb mentions Junior’s early dominance of the Maris HR record chase. I still remember checking the newspaper every morning before school to see if he hit another one (or sometimes two). That was a fun year to be a Griffey fan.

Here is the Extra Edition parallel: 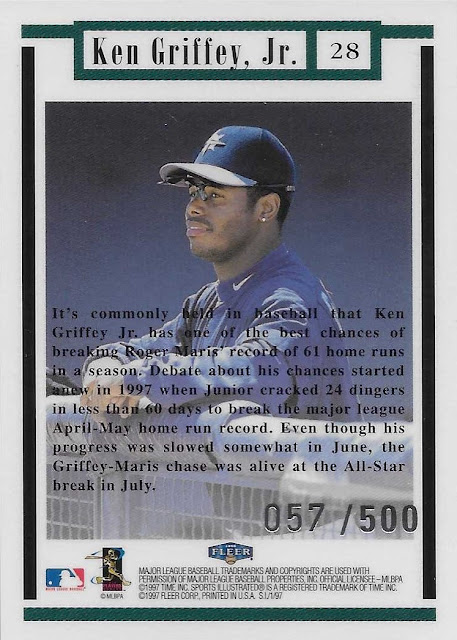 Let’s get to the coolest part of the Sports Illustrated checklist: 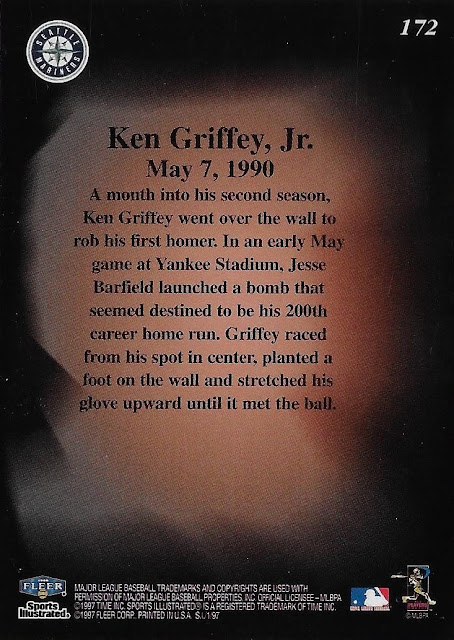 I’m vaguely aware that one of Junior’s nicknames is “The Natural,” but I’ve always felt strange calling him that. Not SI – they filled the entire width of a magazine cover with it, and they did so way back in 1990, no less. That magazine cover came out just before The Kid would win the All-Star Game MVP and this card came out just before he would be named the AL MVP. What timing. This card is Sports Illustrated’s version of a big ol’ “Told ya so.” 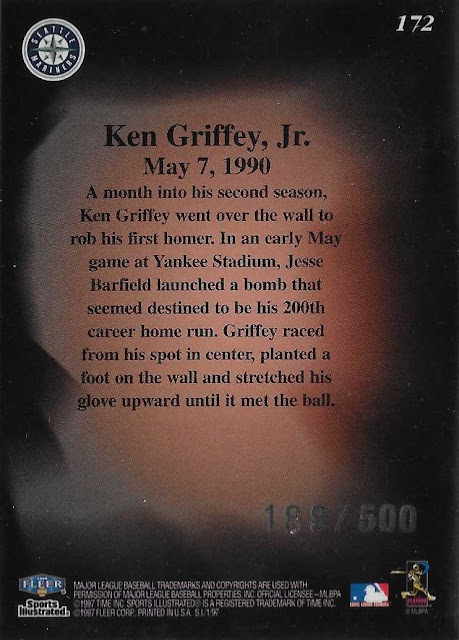 I love that cover, but the other one in this set absolutely takes the cake: 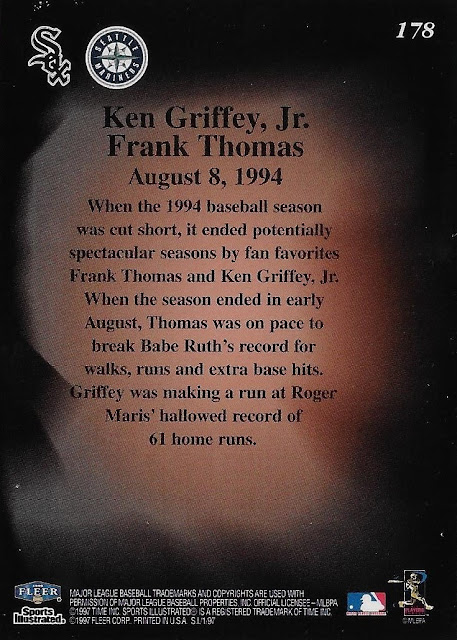 Sure, it’s one of those upsetting woulda coulda shoulda cards that reference what might have been had X happened or not happened, but anyone else out there who collected actively at the time this came out remembers that it was all about these two fellas. They were unstoppable; and while you might have liked them both (I did), you know you liked one more than the other. It was not unlike the Gilligan’s Island Ginger vs. Mary Ann quandary. 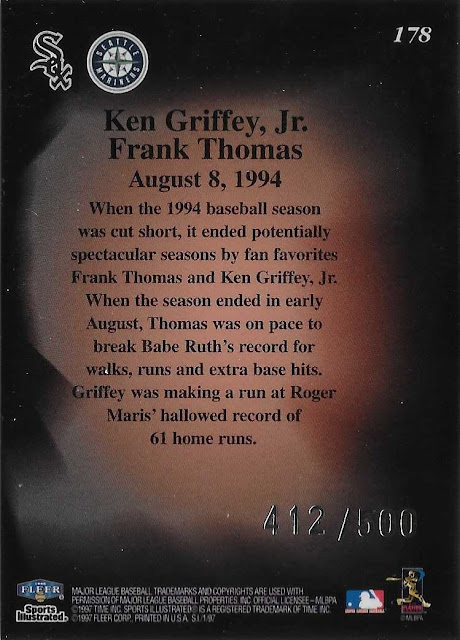 There were also exchange cards available for autographed mini covers, but Griffey was not one of them. He did, however, make it into one last insert:


Even now Sports Illustrated is a magazine made up of page-sized mini-posters. How could they NOT make an insert exactly like that? The paper stock used even feels like magazine pages. And it’s not your run-of-the-mill action shot, either. It’s a candid, behind-the-scenes portrait that we may never have seen otherwise on a card. The only problem with it is how do you get it graded?

Here are the Griffeys I still need from 1997 Fleer Sports Illustrated:

BAM. See that? I have them all! That’s incredibly rare for a 90’s set with FOUR low-numbered parallels. I guess I just like this set that much.

Fleer took their partnership with SI a lot further, releasing three more Sports Illustrated sets the following year and two the year after that. The following sets would continue to be flipping brilliant. And then, along with Fleer as a whole, they were gone.
Posted by The Junior Junkie at 12:10 AM