The time for trades and trade posts is NOW. With Mardi Gras entering full-swing tomorrow evening, I'm going to be indisposed for the next week, then after that it's going to be doctors' appointments and finishing the nursery and umpteen other things before this baby comes. I have my work cut out, fellow card collectors, but I'm up to it.

On top of that, one of the issues with not being able to fully access Blogger from work is that it's harder to keep up with trade posts. Before I would simply upload images in a logical order at home and write the words the next day at work during my down time (which can be rather ample, especially around Mardi Gras when pretty much the entire city is checked-out). Sadly, that is no longer possible.

Tonight I decided to sit and quantify exactly how behind on trade posts I've gotten: eighteen. I am eighteen trade posts behind.

Here are a few to get that number a little lower: 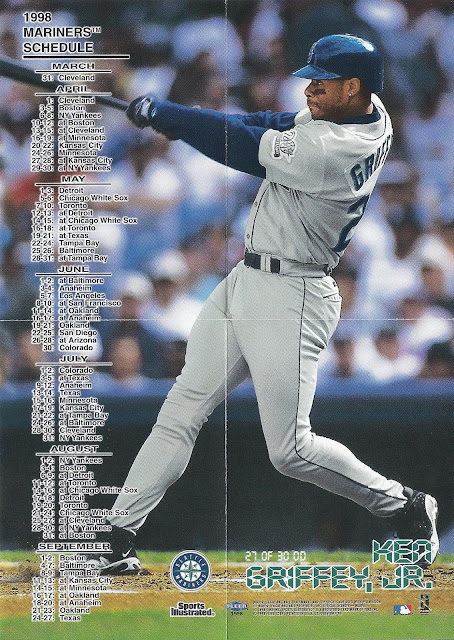 AJ aka The Lost Collector sent me a PWE with two "cards" in it. Those parentheses are because one of the cards is a mini poster from the unsung but markedly above-average 1998 Fleer Sports Illustrated. It's kind of the perfect swing shot. You're damn right I'm counting this one as a card. 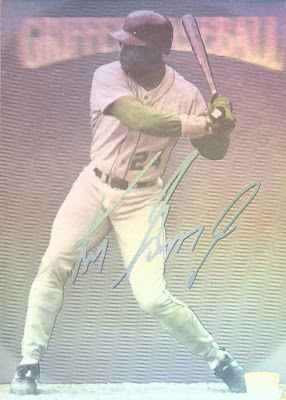 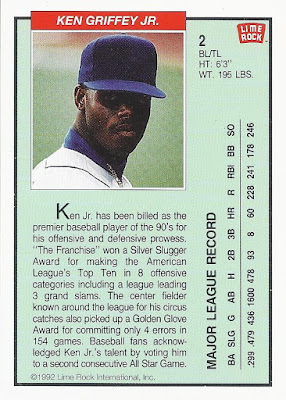 Also in that package was this oddball autograph from way back in '92. I've seen an autographed version of this bad boy (that's your cue, magicpapa!), but I have no immediate plans to chase it. This reg version will do nicely for now.

Thanks, AJ! As always, I've got a ton of nice Yankees set aside just for you. 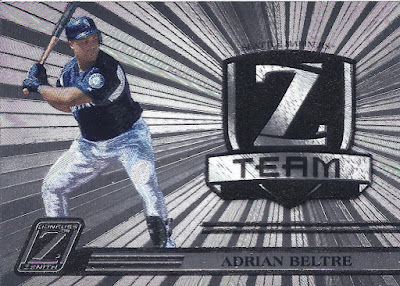 The hilarious Thorzul sent me an awesome package of Mariners stars that I believe qualifies as a Bipping. First, some Tinos:

Here's Tino back when he played for the right team (just kidding, AJ) as well as a not-so-easily-found Topps Black Gold certified redemption card. 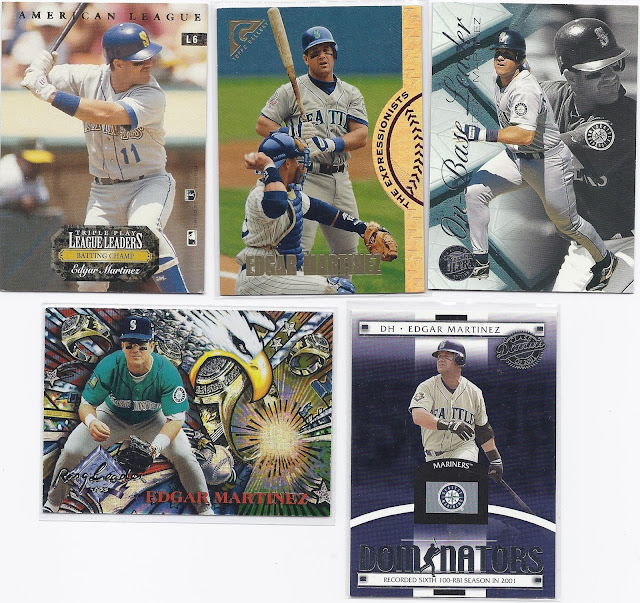 We're not to the bipping yet, but this is a very nice selection of '90's Edgars including the infamous Ring Leaders insert that just insists that you look at it first. 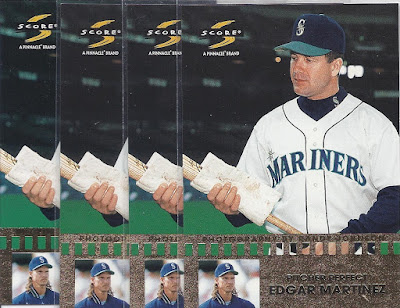 I know what you're thinking - still not the bipping. 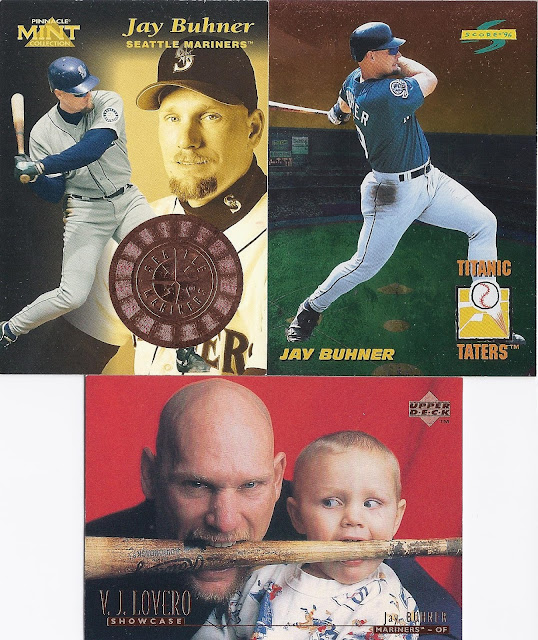 Again, some high-quality 90's insert and what may be my favorite non-Griffey-cameo Buhner card of all time. 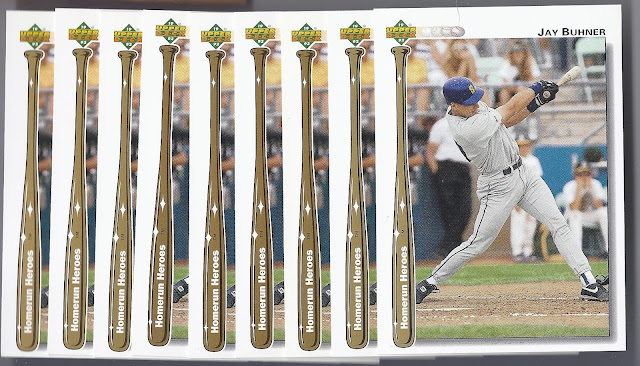 There it is. There's your Bip. Nine copies of Buhner's '92 Upper Deck Homerun Heroes card. Ridiculous. I like that we get to see the little bat boy in the background here. Adorable.

Thank you, Thorzul! I'm still on the lookout for '92 and '93 Topps Golds for your set build. Those are tough to come across. Somebody go pull Thorzul's trigger! I've been tempted on more than one occasion... 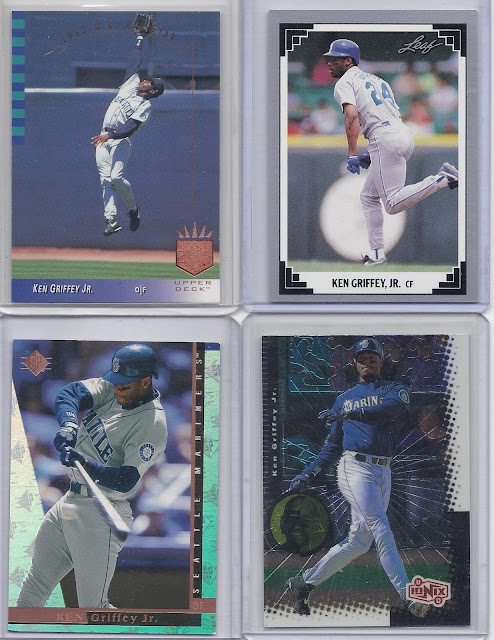 A package filled with shiny 90's Griffeys in top loaders is one thing, but check out what Brad of Brad's Blog sent along with these: 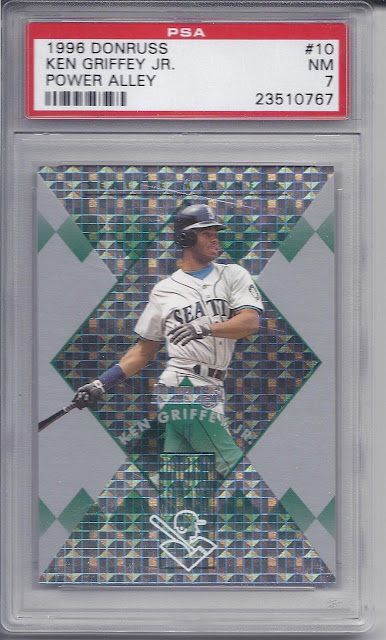 This is truly one of the great inserts of the 90's. I have no idea what made PSA give this little beauty a 7 - it looks near-perfect to me. This card even made my Top 30 Griffey Acquisitions of the Year list along with the die-cut parallel I had to pay out the ear for. 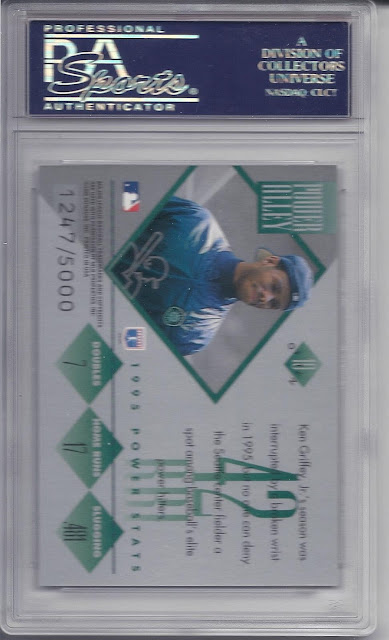 Amazing card, Brad. I'm not worthy. I owe you big for this one. 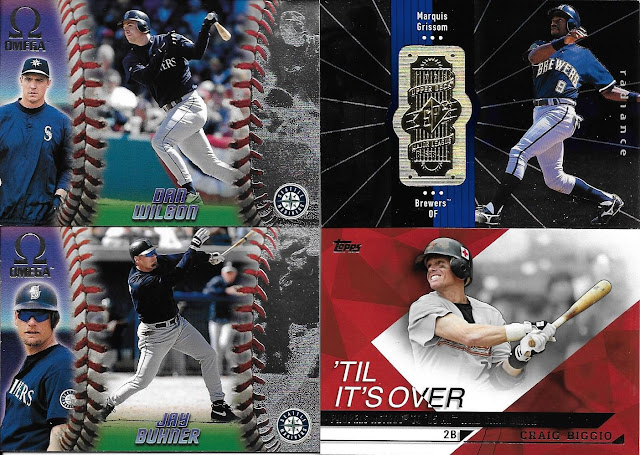 Here's some great PC additions from Jim at GCRL along with another one of those Katrina batting helmet stickers I've started collecting. Good eye!

Wilson had a bizarre stance as you can see on that late-issue Pacific base card, but the man made it work. Thank you, Jim! It's been a while, but you know I have some double-plays and Dodger love set aside for you. 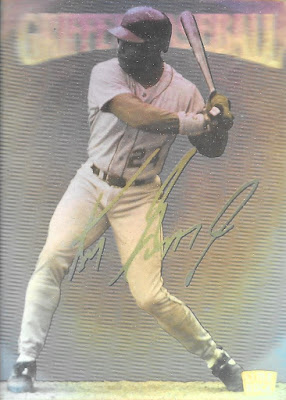 Kerry of Cards on Cards, in addition to being a PWE master, also seems to be a master of timing. 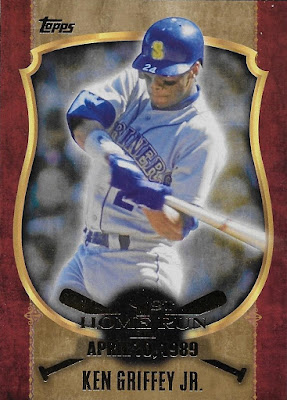 I had literally just learned that this insert comes in three different foil colorways when I came home to a PWE from Kerry that included this gold version of Junior's 1st Home Run insert from 2015 Series 2. I already had the silver, so finding one in the mailbox the day I learn it exists was a treat. 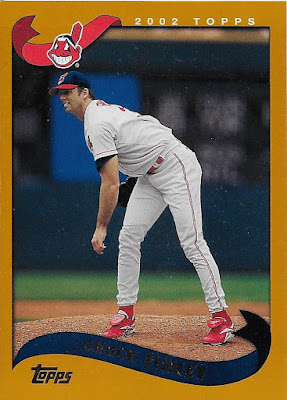 Kerry also threw in Chuck Finley's almost-sunset card. He had only one more Topps base card in the 2003 set with the Cardinals before hanging it up. Too bad - I'd like to have seen a return of the Chuckstache. Oh, well. Thanks, Kerry! 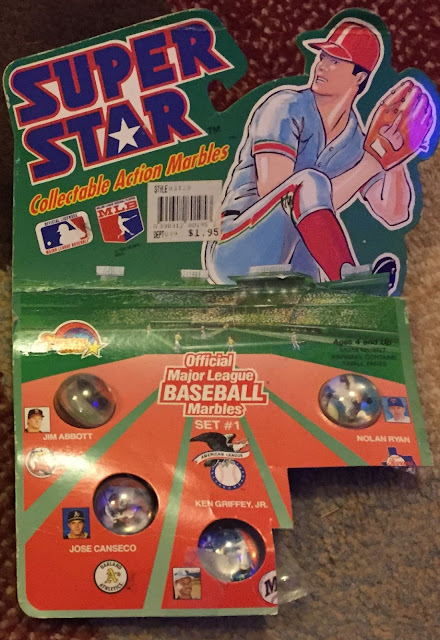 Angus of Dawg Day Cards sent this selection of Super Star Collectable Action Marbles (yes, they misspelled "collectible" right in the title) because they have a Griffey in them and so that I could make sure the non-Griffey marbles can make it out to the right people. I'm finally ready to begin doing just that. I know the package is a little dinged up, but the marbles inside are perfect. He also included a pair of sealed oddball minis, but the scan I took of them didn't come out all that well. Doesn't matter - I'll also be shipping them off to other bloggers in the coming weeks. Thanks, Angus! These are pretty cool. 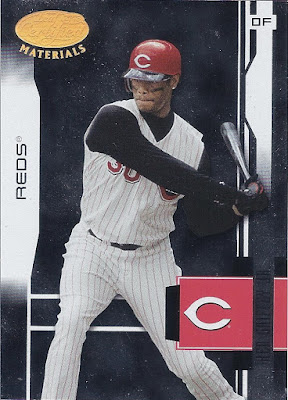 This looks like the regular Leaf Certified Materials base card, but there is a small difference that's hard to spot for most people. Not Josh of Royals and Randoms, though. 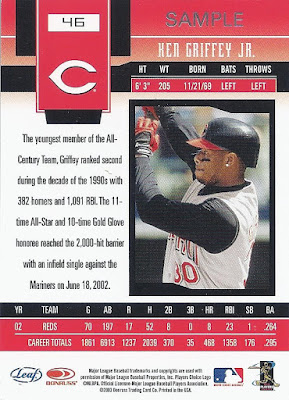 See that little "Sample" on the top? I almost missed it myself. Josh sent me this Griffey need MONTHS ago, and I finally found the scan to show you fine people. I already have a few neat Royals I got special at the LCS to send your way. Thanks a bunch! 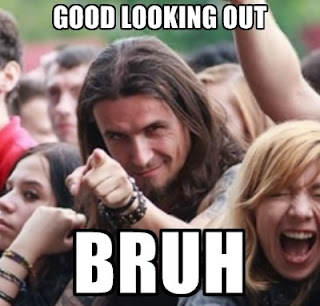 Thanks to all you guys for the goodies. It's amazing to come home to an envelope or little yellow bubble mailer full of surprises. Y'all are awesome trade buddies. There more trade posts coming starring Gavin, Corey, Chris, Larry, Doug, Fuji, Jeff, Wes, and Greg. Look out for those, and thanks for reading!
Posted by The Junior Junkie at 12:08 AM