Welcome to Page 17 of the Great Griffey Frankenset!

Here is page 17 of the Great Griffey Frankenset: 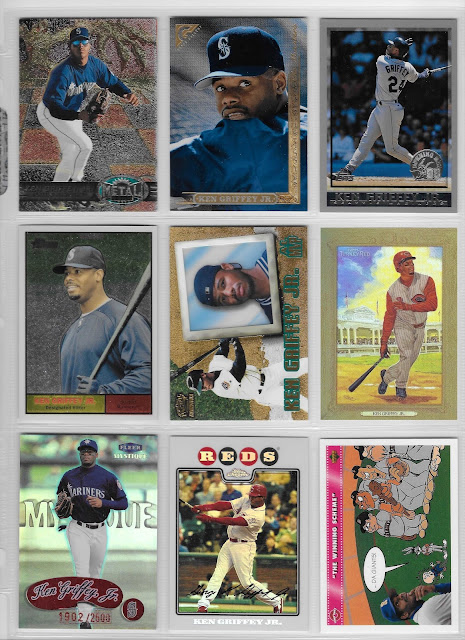 Page 17 Notes: With this page we pass the $3000 mark on total Frankenset value. The average card value sits just over $20 at this point and has nowhere to go but down, sadly. But if you're a price guide snob, don't fret! There are still a handful of premium Griffeys yet to come. I should also mention that this page includes a Ken, Sr. card that really is just a Ken, Sr. card and not a Junior, but there's a twist that makes it still valid for the purposes of the Frankenset. Enjoy! 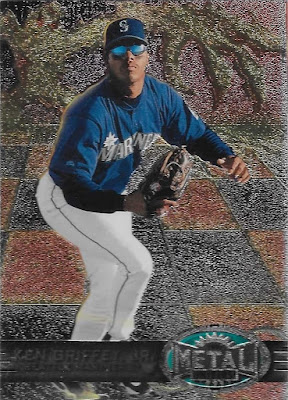 Some of you may already know I’m a total slut for early Metal Universe, particularly when the player on the card is playing chess against and evil tree monster. 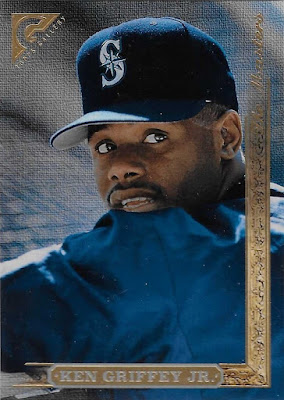 I’m equally enamored with Topps Gallery, a brand I honestly believe we will be seeing again someday soon. That filigreed half-border and candid portrait make this one of my favorite Griffey base cards from this brand, and that’s saying a lot. 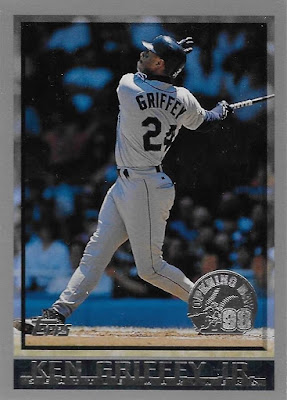 All the cards were a dark gold color in 1998 Topps. Not everybody was a fan. Personally I prefer the silver of Opening Day from this year. It goes well with the blue/green behind the nameplate and Junior’s Seattle grays. I even like the big, shiny Opening Day emblem. 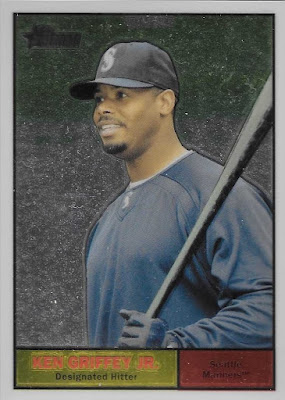 One of the more low-key base card designs from Topps, even by vintage standards, all gussied-up in shiny chrome. This card is a warlock, and it needs to be stopped. 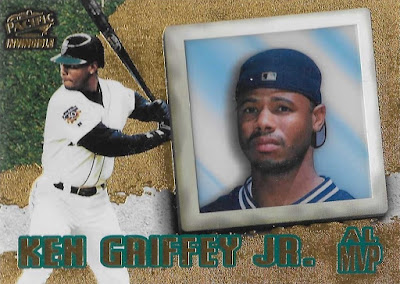 Griffey’s regular base card in this set is #64 – the card you’re looking at here is a special base card created just for his AL MVP win. Larry Walker, the MVP of the National League, also got a special MVP card at #150, but his has him looking ridiculous with his hat turned forward. Not like this zesty lil’ number. 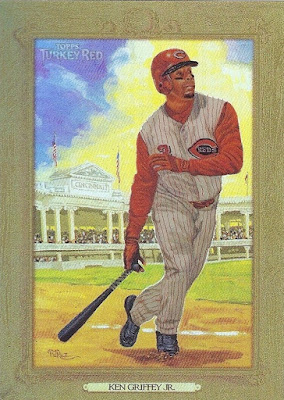 A refractor version of a design from 1911, this Dick Perez-painted card shows Griffey playing at Palace of the Fans, the Cincy baseball stadium until Redland Field (Crosley Field) was built in 1912. If I’m looking at this right, Griffey just hit a ball from somewhere along the first base line. Take THAT, rules of baseball. 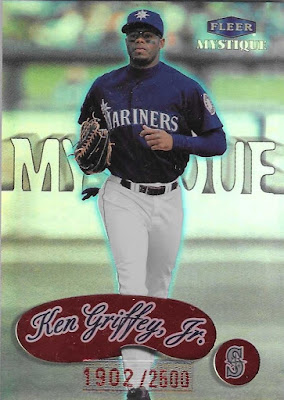 Here’s another base card that isn’t really Junior’s base card. He also got a short-printed base card (#1) in the regular set – this is a serial-numbered “Super Star” subset made up of the last ten cards in the checklist. This one had a layer of opaque film on it at one time that someone had to peel off to reveal its Griffeyness. Another strange artifact of 90’s cardboard. 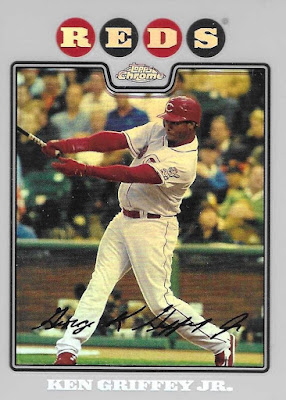 At 1:3 packs, refractors from 2008 Chrome were not all that rare – not like the old days. With the thick borders and ample use of white in this design the regular refractor is not quite as impressive as some of the colored parallels, but you’ve got to love that swing-away shot. 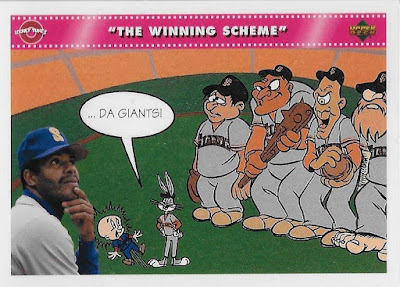 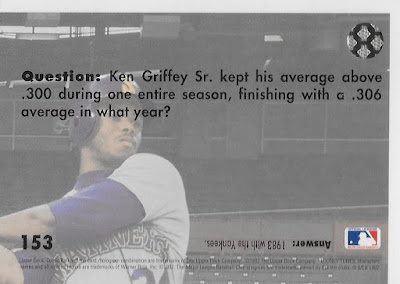 Here’s a first: a Frankenset Griffey that only counts as a Frankenset Griffey if you look at the back. In the strictest sense this is a Ken Griffey, Sr. card with a Junior cameo, but I don’t count it among the regular Junior cameos as this Comic Ball set only featured three players: the two Griffeys and Jim Abbott. However, it is card #153 and it does have Junior on it – that’s good enough to earn it a spot in this Frankenset.

Don't look at me in that tone of voice. It counts.

Thanks for reading, and look for page 18 coming soon!
Posted by The Junior Junkie at 9:43 PM