2006 Allen & Ginter: The Triumphant Return of Ginter, I Guess 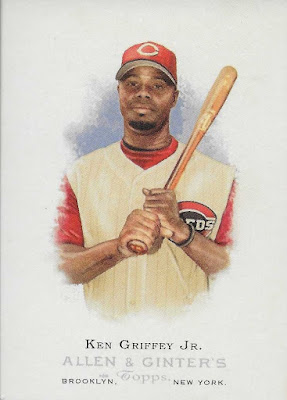 In 2006 Topps gave us one of the most popular and enduring sets of this century when they rebooted the long defunct Allen & Ginter brand (last seen when Grover Cleveland was president). The new cards are larger than their tobacco card ancestors, but they share the same simple design with a painted image and lavishly-fonted logo. While sparse, the aged-yellow card backs are a charming recreation of the originals, spelling out numerical stats in words and proudly heralding each card’s subject as one of “The World’s Champions,” a title Topps continues to honor their card subject with to this day. Yes, even Incredibeard.

Now, I like this brand, but I’m going to word this next part carefully.

People really love Allen & Ginter, and it has grown into kind of a big deal. I find this funny because I (like many of you, I’m sure) had never heard of this beyond-vintage tobacco brand before I ran into the modern set. Suddenly everybody knows about Ginter cards and many of you even collect originals now because of it. Heck, even I have one:


I’m willing to bet the market for A&G originals from the 1800’s has never been better because of Topps, but it still seems strange to me that the themes and quirks of the original sets are so far-removed from today’s collectors and yet we are meant to embrace them as part of our cardboard heritage.

Take the N43 box toppers, for example. I was already vaguely aware of tobacco cards, but I find it difficult to celebrate these things. They pre-date my grandparents by half a century – I don’t know what they are or why they are called “N43.” There was never a moment when I thought, “Wow, they’re bringing back N43’s? Ugh, FINALLY.” They’re as alien to me as a textbook on Chinese dentistry.

The same is true about the no-number cards. I can’t relate to the fact that some cards were printed with no numbers in 1887. Who can? This is not an exciting prospect. Now if they decided to recreate the “no name on front” cards from 1990 Topps, I imagine I could get excited about that because, you know, I was alive at the time.

And every card says “Brooklyn, New York” on it. When I first saw that I thought, “Pretty sure Griffey plays in Cincinnati, guys. And Brooklyn hasn’t had a team for a hot minute.” I figured out later that it was a reference to original Ginter cards printing their home office location of “Richmond, Virginia” on every card. Now how was I supposed to know that?

I should reiterate that I do like this set and love original Ginter cards - they’re beautiful, tangible little bits of history you get to hold and collect. And I should mention that as a whole the brand seems to get better every year (though I’m still partial to the ’06 design). But the whole concept is still very strange to me, and I doubt I’ll ever get over it.

That said, Ginter is bigger than ever. In addition to the myriad set-builders across all facets of card collecting, there are huge box-break contests, puzzles, secret codes hidden in sets, and all manner of mini parallels in varying colored back printing and hand-numbered ink. The 2006 set, however, was a lot simpler. At only eight cards (possibly eleven?), two of which are actually box toppers, this is the shortest Griffey checklist of any modern Ginter set.

It also includes one of the ugliest baseball cards ever created. We’ll get to that one later. 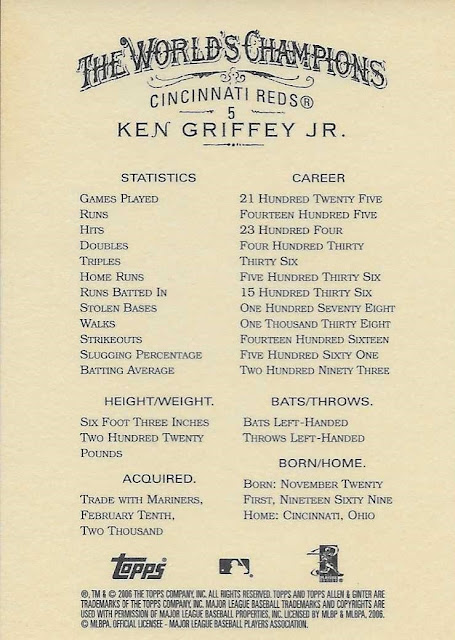 Griffey’s regular base card is an SP (set builders LOVE SP’d base cards). The image they used is a tasteful one – just our guy standing with a bat on his shoulder and a mysterious Mona Lisa smile. Nice looking card. 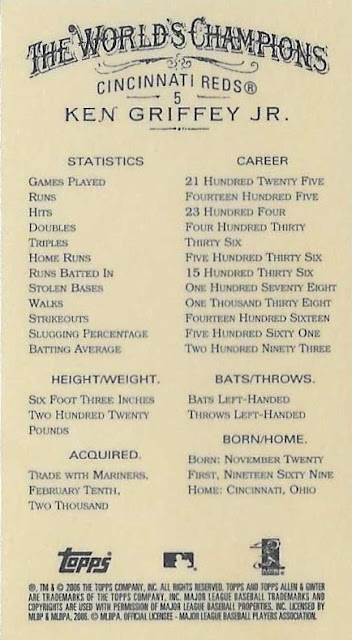 Here is the mini version which is actually pretty tough to track down. Minis were one per pack, but this is a mini of an SP. I, like Night Owl, prefer the mini to the full-sized card all day.

There are parallels in this set that include black borders, A&G back, and cards missing their card numbers, but I have never been able to find an example of any of these for the Griffey. I suspect those parallels do not exist for the SP base cards, but I could be wrong. Any help here would be appreciated.

Sadly there are no relics for the Kid in ’06 Ginter – I say “sadly” because I like Ginter relics. They are mounted on minis which are then framed in plastic adorned with tropical imagery. Cardboard Connection calls these “the hobby equivalent of a Hawaiian shirt.” That pretty much nails it.

It’s cool, though. They made up for no Griffey relics with the worst Griffey card I’ve ever seen:


Now I’m not one to poo-poo Dick Perez. The man has some great work out there, and I respect the authority of his sweet uncle beard. There are even a few cards in this very insert that are damn attractive (A-Rod, Bonds, and Todd Helton are a few favorites). But THIS. 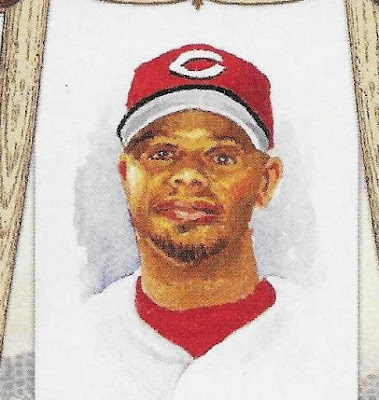 This is just a dumpster fire. Junior looks like a burn victim who was attacked by a swarm of bees. Go ahead – fuzz your eyes a little. It still doesn’t look right. I want the 1/1 original not only as a Griffey card, but as an artistic oddity. 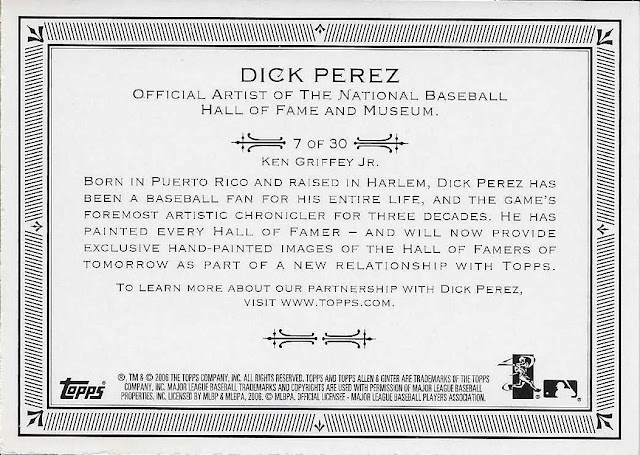 The back offers a peek at Dick’s accomplishments (omitting his years of work with Donruss), but ends with what feels like an advertisement for Topps Perez prints. That's too bad. This insert should have been one of the greatest of the decade. 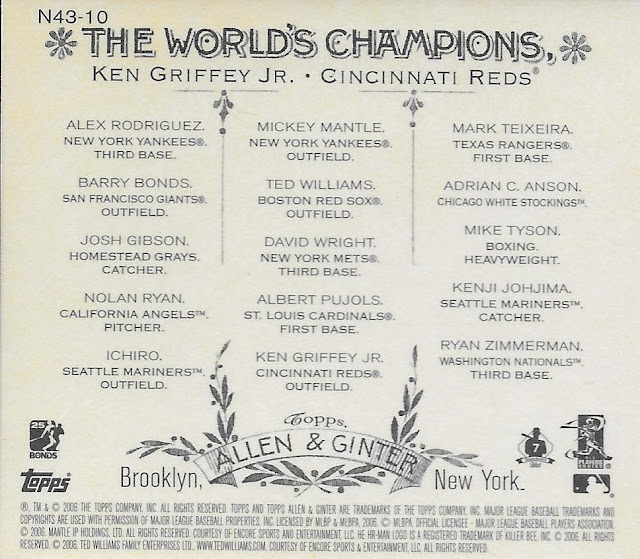 If you though ’89 Bowman cards were a pain in the butt to store, get a load of these big, square jobbers. They are based on the 1888 N43 set because, let’s face it, everybody knows and loves the N43 set. It depicts the rare mini version of Junior’s base card among plants, an old-timey baseball photo, and some flags that I can only assume read “Detroit” and “Phila.” The back is a numberless checklist of other guys who got the big, square card treatment.

Someone figured out that these fit right to the edge of a top loader in width, so two top loaders taped together sandwich-style does the trick. That’s the only way I’ve ever seen these cards, so I’m used to seeing them darkened by two layers of top loader plastic. The first time I ever removed this one from its case was to make the scan you’re looking at now.

There are probably a handful of ultra-vintage collectors who got the reference when these came out, but to me they are an unwieldy nuisance.

Here are the Griffeys I still need from 2006 Topps Allen & Ginter:

That postcard isn’t too expensive, and from what I’ve seen of the other postcards I definitely want one of my own. Here’s an image of the Griffey postcard: 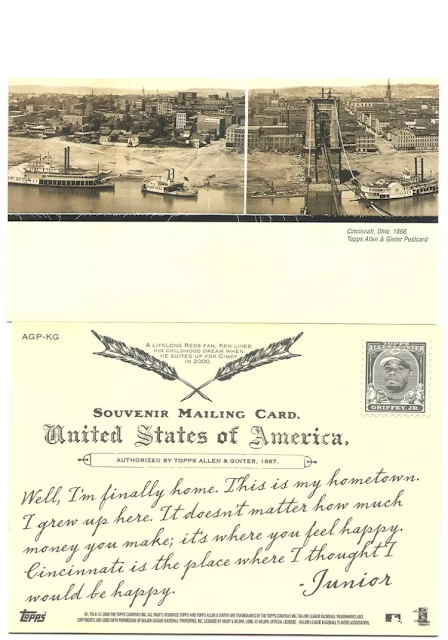 “Cincinnati is the place where I thought I would be happy.” Oof – it’s worded like a homesick kid’s letter from camp. I’ve got to have one.

I hope I didn’t offend any of you Ginternauts out there – I know there are a lot of you. Again, I like the cards – it’s the concept I find strange. If it’s any consolation, I’m one of the weirdos who likes ’95 Fleer.

Thanks for reading!
Posted by The Junior Junkie at 10:51 PM