2014 Stadium Club: Where Every Card is an SP 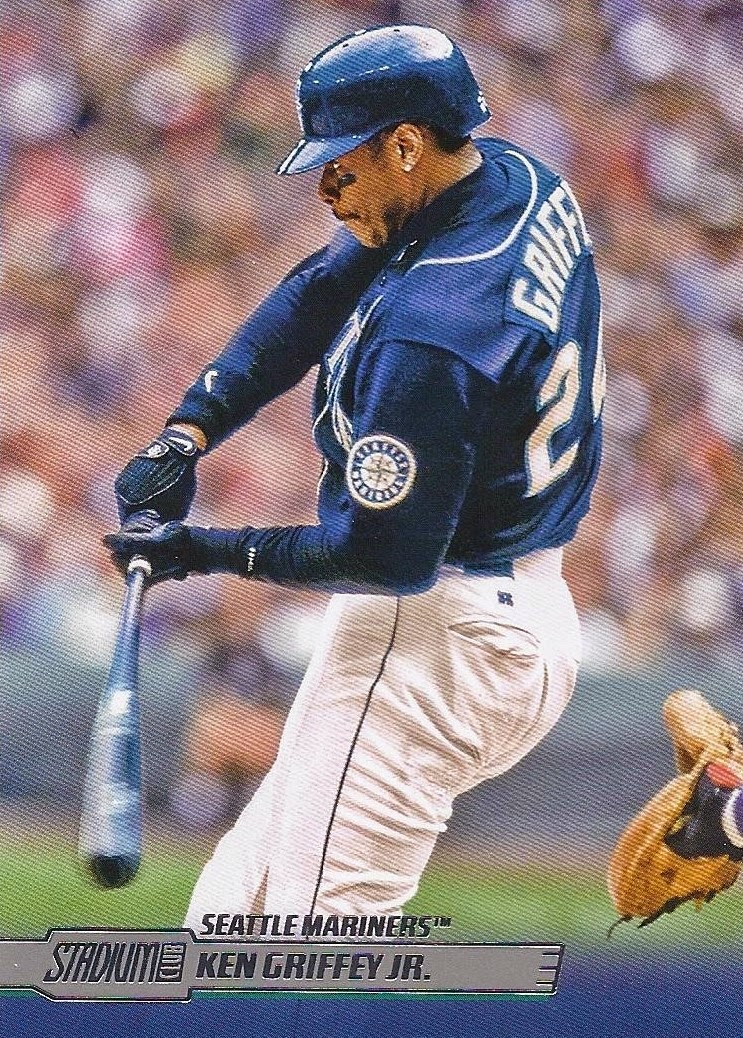 Not really, the thing about all the cards being SP’s. There are no SP’s in 2014 Stadium Club, but if I didn’t already know that I would think I had a ton of ‘em. Look at these: 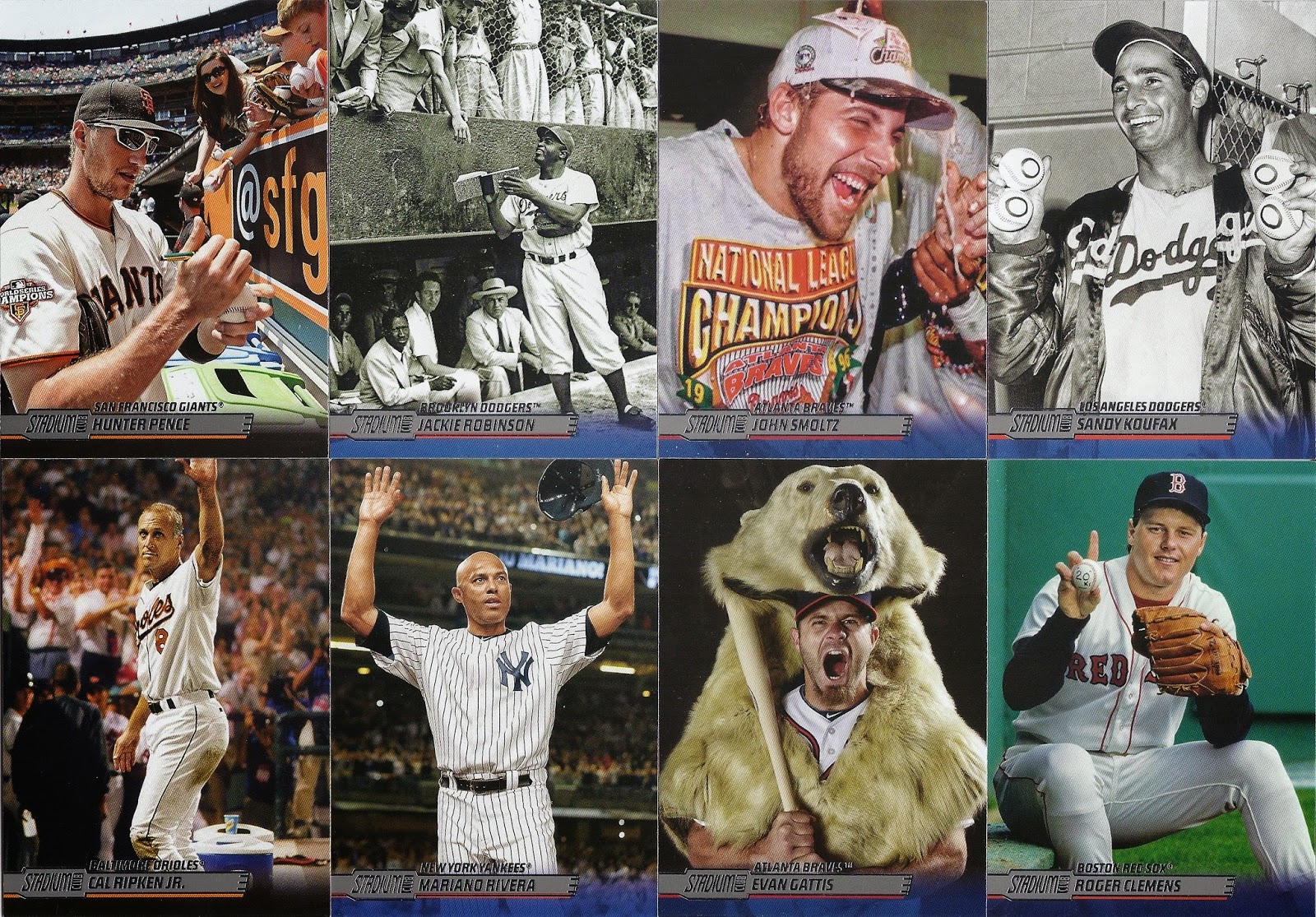 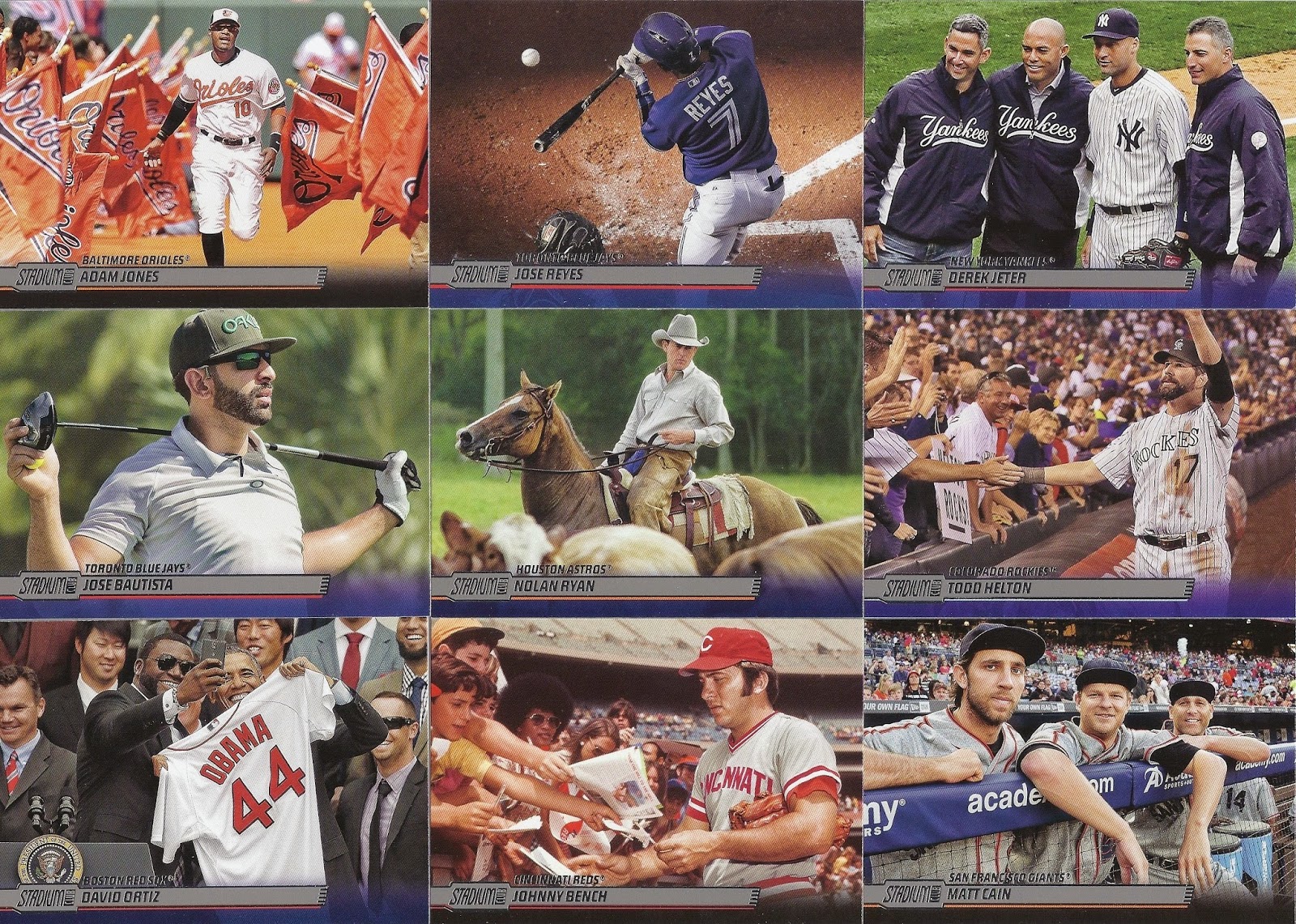 Again, these are not SP’s – none of them. This is like a dream base set, the one we’ve been waiting for. Exciting, intriguing, and just plain different photos of our favorite players from yesterday and today. The different part is especially refreshing as we’ve all seen the same handful of photos reused over and over.

How often do you see a presidential selfie card that isn't an SP?


Before we move on I should mention that I've completed this set by cheating.  I knew pretty early on that I wanted to build the base set, and upon seeing the majority of the Field Access insert I decided to go ahead and build that, too. After breaking two boxes and pulling less than 60% of the base set (and far less of Field Access) between them, I decided to see what the completed base set was going for on eBay which turned out to be around sixty bucks.  Seemed a little steep.

One day someone listed an auction for the complete base set plus the completed Field Access, Future Stars, and Legends Die-Cuts insert sets. The opening bid was fifty bucks, and I went ahead and bid the minimum fully expecting the auction to break $100. Maybe it was the fact that the listing had no pictures or that the wording and punctuation were a little strange, but I won with no competition. A few weeks later they were all in a binder on my shelf. I felt kind of bad for the seller, too, considering how much more he could have made had he carded the sets out.

I may go back and sell the Legends and Future Stars sets as they are going for a pretty penny on the ‘bay, and I’d like to recoup some of that fifty bucks. Field Access is staying in the binder with the base set because it’s great.

Now that you know my dirty secret, here are a bunch more base cards.  Note the plethora of horizontal photos, autograph signers, and celebration shots. 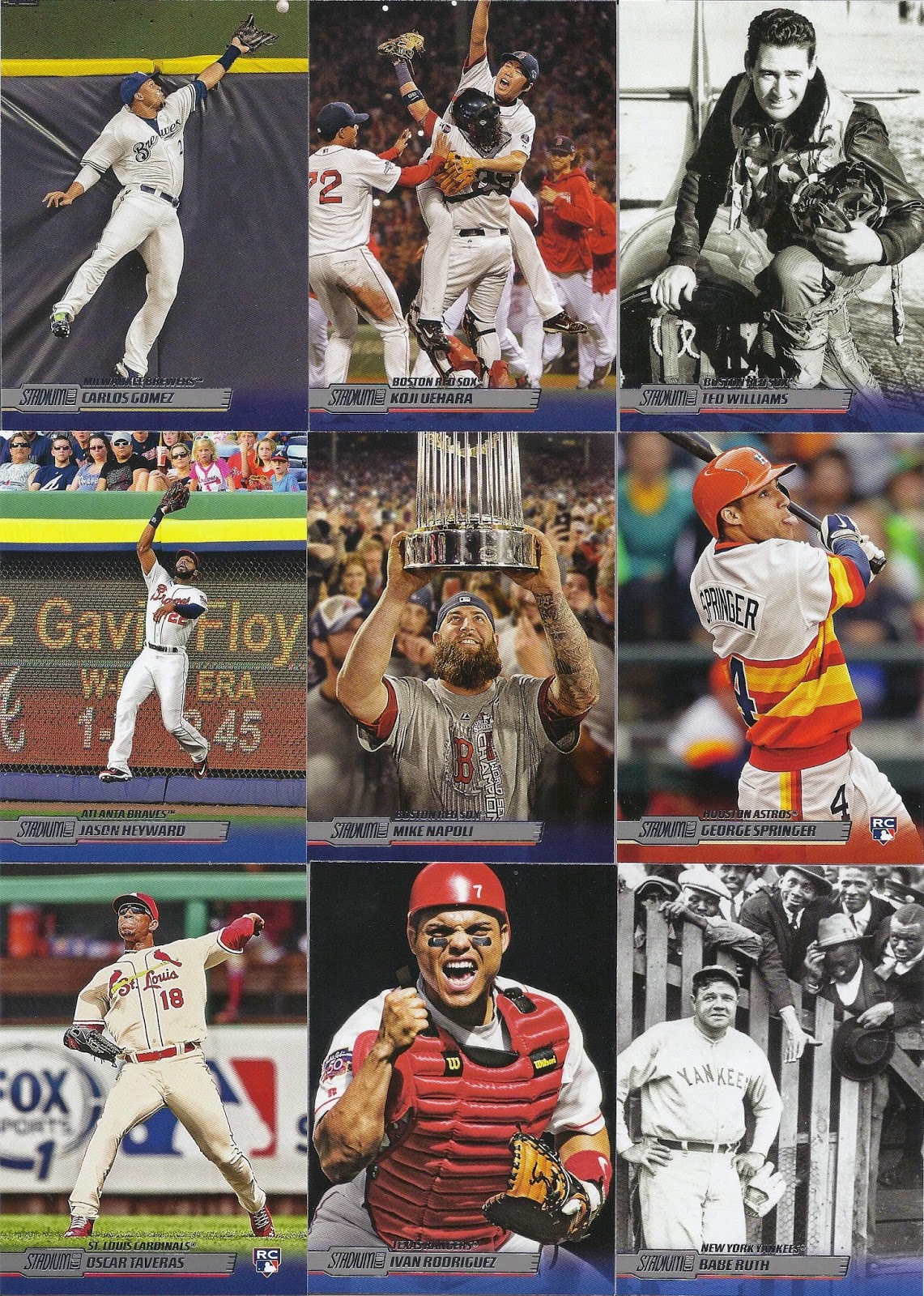 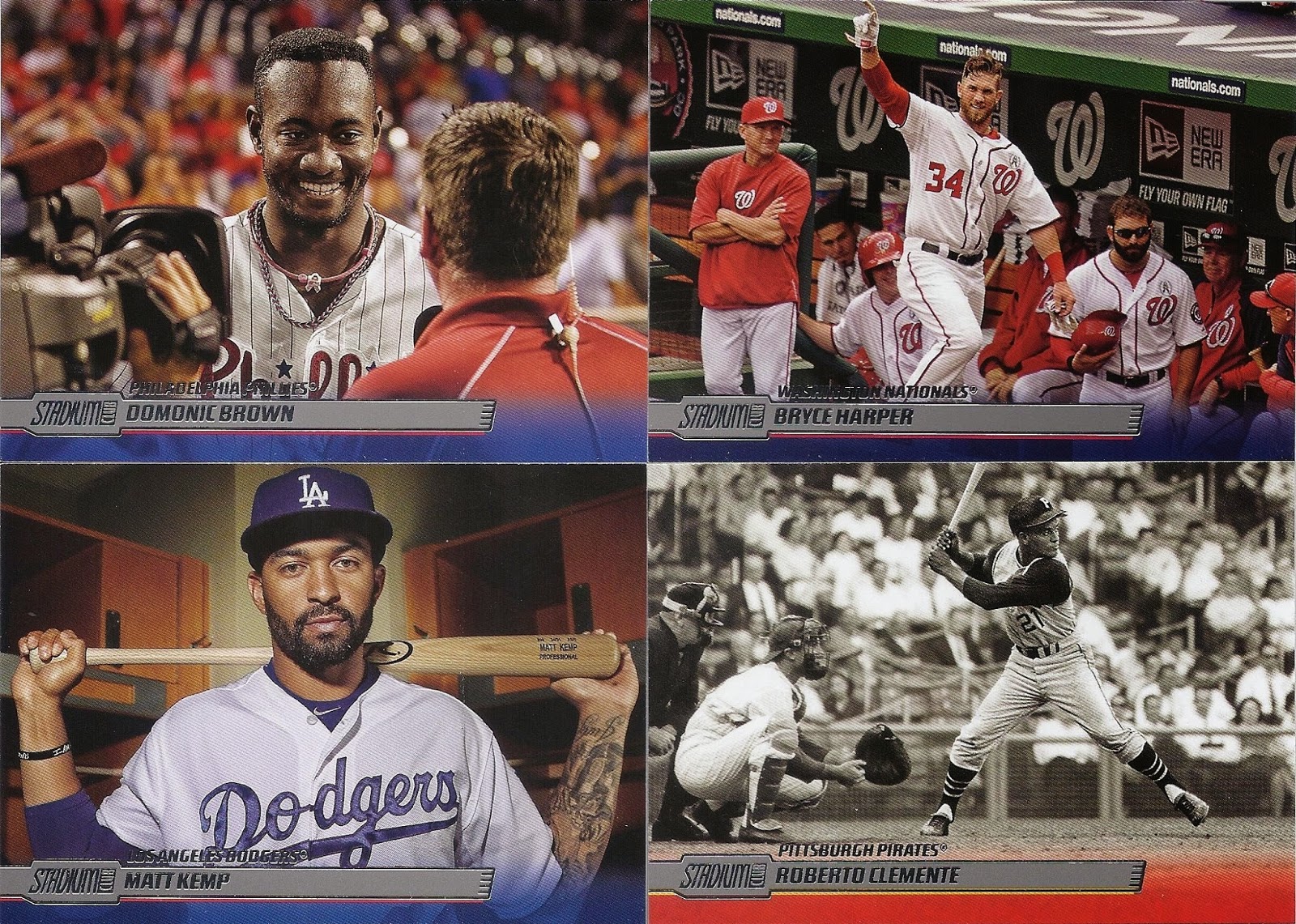 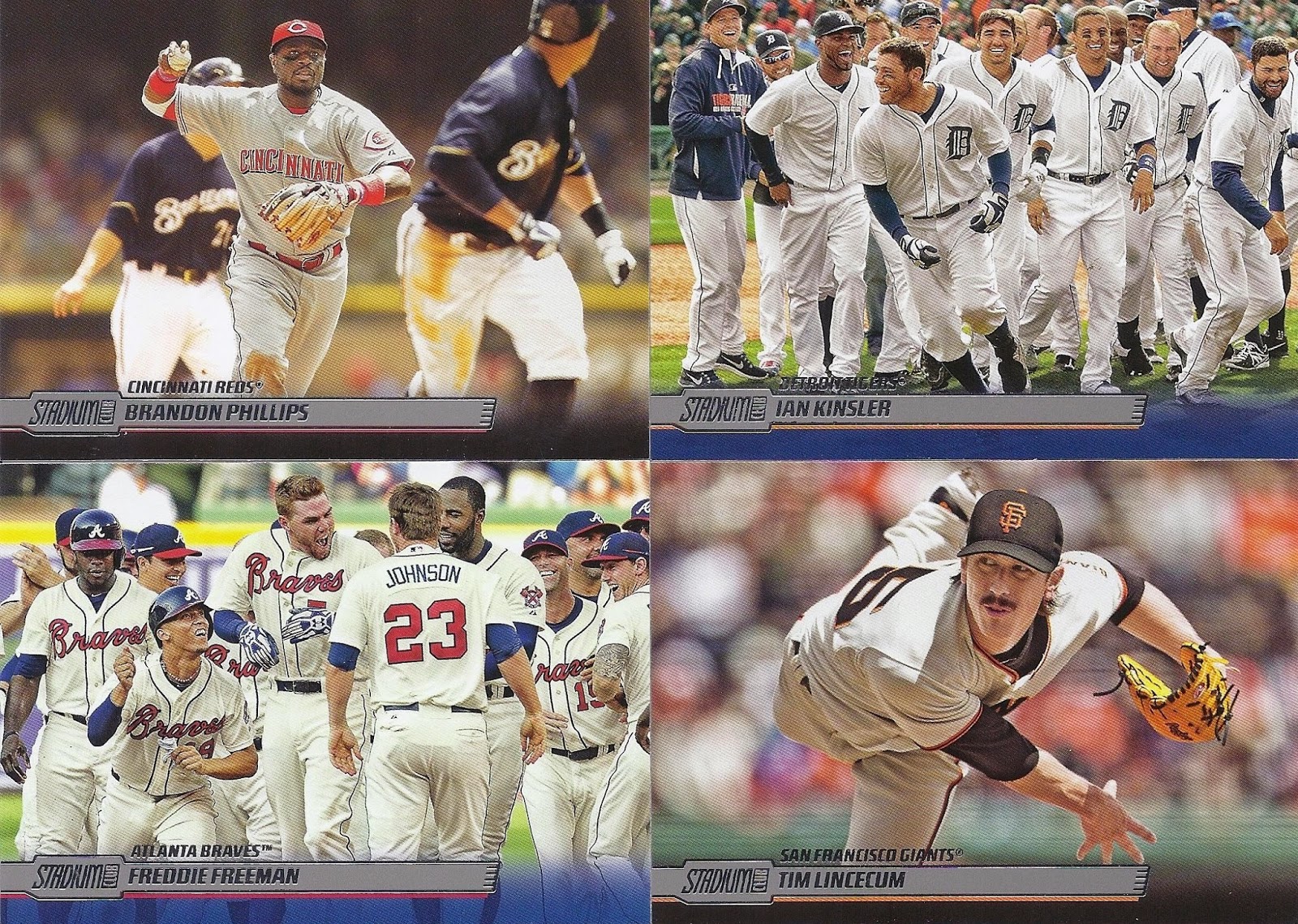 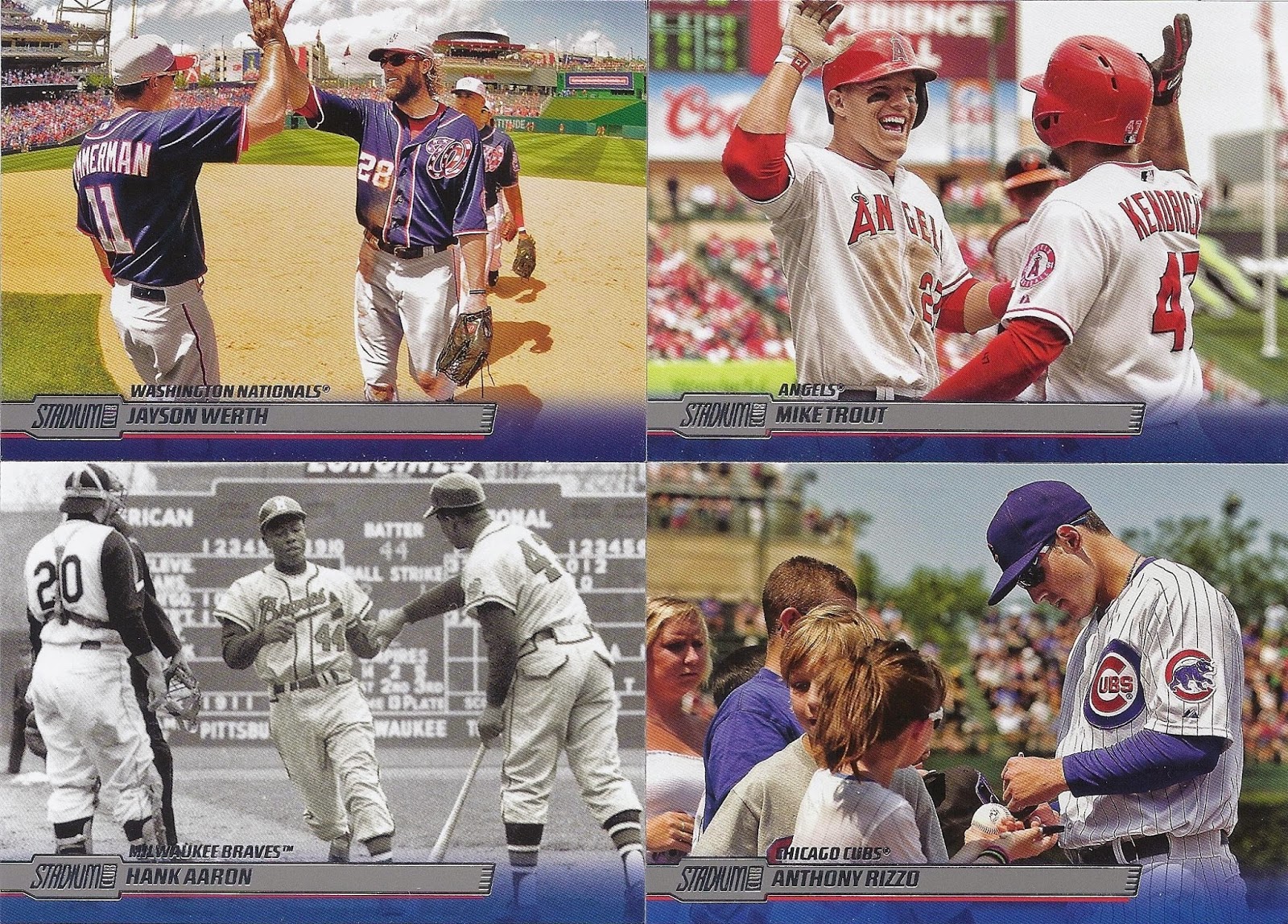 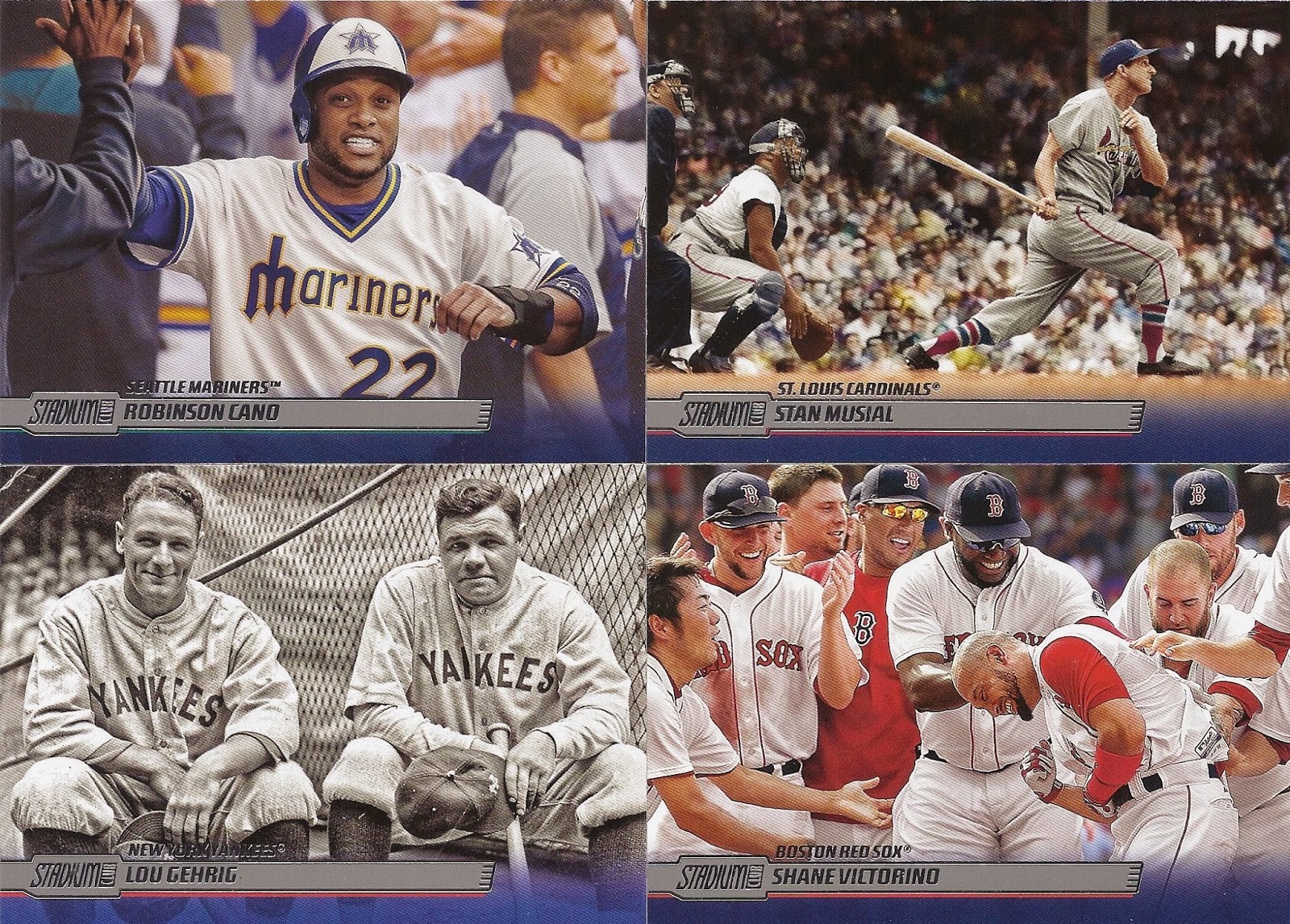 Long story short, I have zero complaints about this base set. Well done, Topps. You’ve set the bar really high for next year’s set. Don’t blow it.

Let’s talk about the boxes themselves. 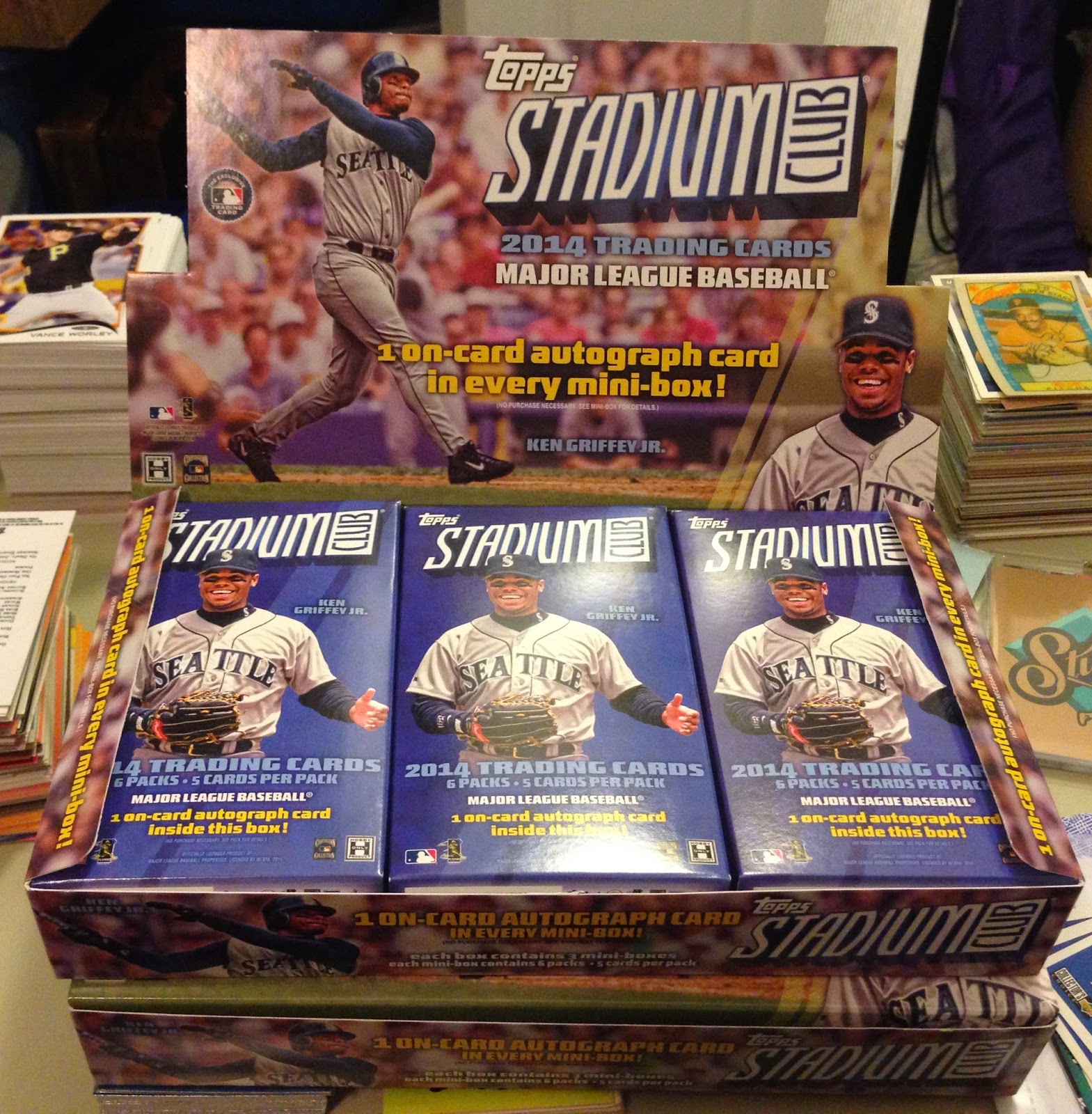 So much Griffey love I can barely stand it. These look like Upper Deck boxes from the late 90’s in the best way possible. The packs themselves look fantastic, too, in deep blue chrome with a stately Stadium Club logo emblazoned across the front in silver and white. They’re downright candy-like.

The boxes I’ve seen priced everywhere between $50.00 and $125.00. I was lucky enough to land two boxes for $55 apiece, but pulled very little of substance apart from a #/50 auto of a rookie I don’t know (lots of rookie auto’s to be had). And the thing about the third pack always holding the auto that Nachos Grande discovered in his group break is dead-on, not that it matters much since you’re not supposed to be able to buy individual packs. 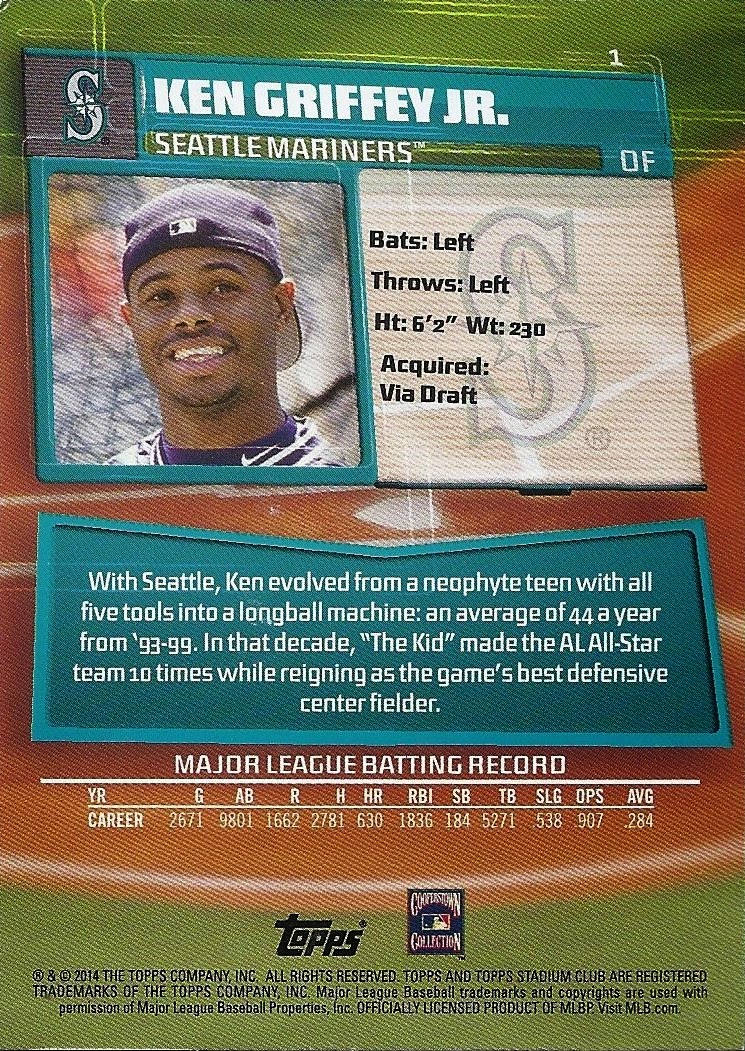 And look who got #1 in the set. There are plenty of pictures of Griffey swinging a bat out there, but this one is as dynamic and explosive as they come. Junior’s face is frozen in a position of deep focus and effort (and probably a fair amount of exhale). Plus who doesn’t love a bendy bat photo?

Generally speaking the design here is perfect for the Stadium Club design timeline. Beautifully-printed, full-bleed photography with a low-profile nameplate that doesn’t interfere with the showcasing of said photography. It’s even accommodating to the parallels (though the spectacularly-cool Matrix parallel is missing - again).

The card back is excellent for having nothing in common with the front – it’s like a whole new card back there, and it’s good. Most noticeable among the Griffey fans should be the trademark backwards cap in portrait. The use of team color is excellent - Seattle blues and greens abound - and I’m all about the great “scoreboard” theme.

Something that I haven’t seen mentioned often is the ball field background which is a Stadium Club staple from way back. Here’s the back of the Griffey card from the inaugural Stadium Club: 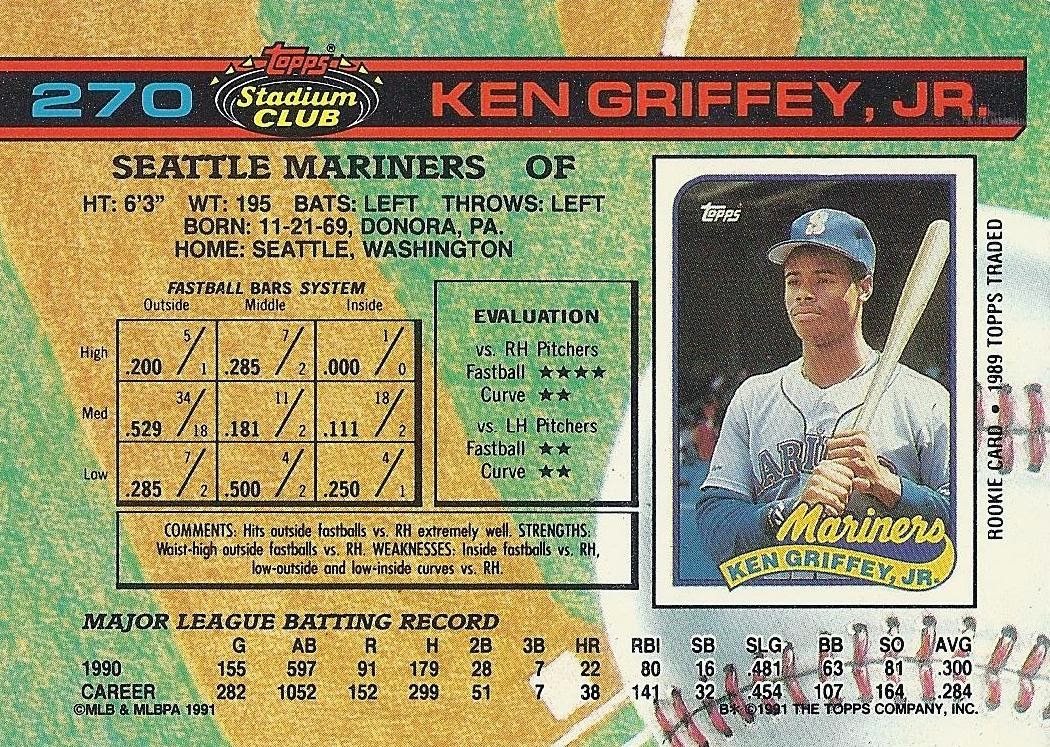 See the similarity? A full-bleed green and brown depiction of a ball field, the prevalent aesthetic of both the ’91 and ’92 card backs. A pretty cool and subtle throwback to the set’s beginnings.

The only thing 2014 is missing is a sporty new way of looking at the stats. Gone are the unique stat grids and charts of yesteryear, replaced by the tiniest group of letters and numbers you could reasonably call a stat line. The same was true for the 2008 set which gave us only a sad little run-of-the-mill stat box. The shift in focus away from player stats is a significant change in the culture of Stadium Club, but it’s not altogether unwelcome because, well, the cards are just really nice.

I have none of the five parallels of this card, so let’s move on to inserts: 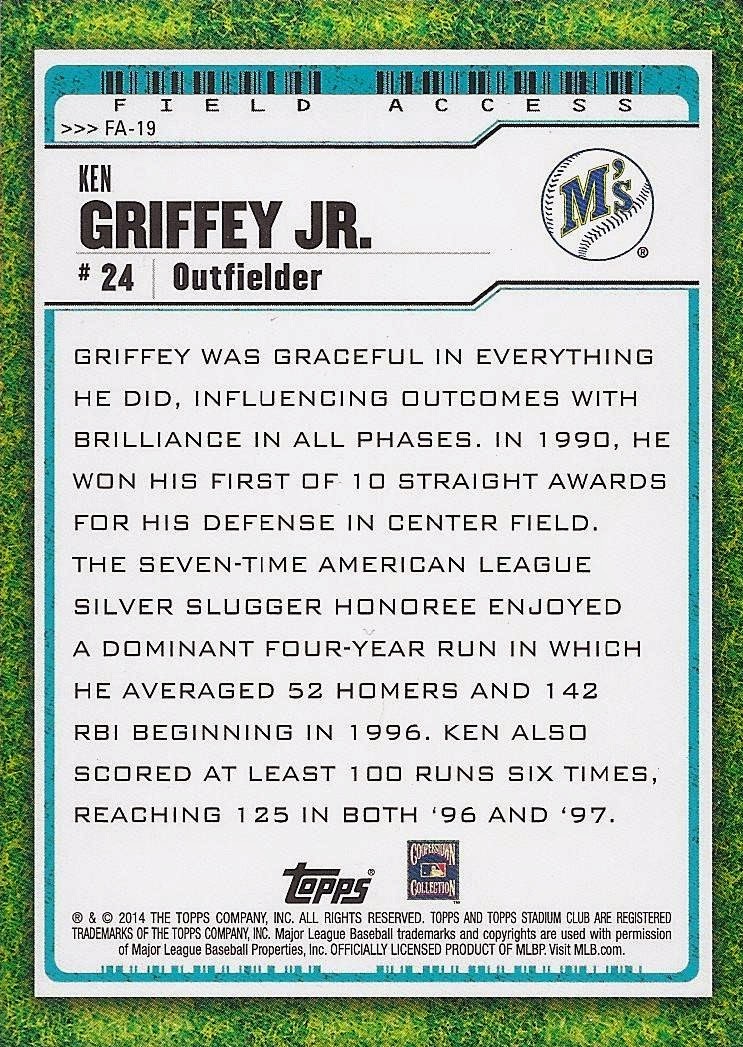 Ah, Field Access. This most common insert of 2014 Stadium Club carries a big ol’ flag that says, “Look! New photos! No recycling of images here.” Every card has a rarely- or never-before-used photo of a current or former star. And there are 25 of them! The design is scant but perfectly acceptable being that it’s both a Stadium Club card and an insert focused solely on showcasing photography. The bar code nameplate can make it a little hard to read the player name, but again I’m willing to let that go because of general awesomeness. Lots of great images here: 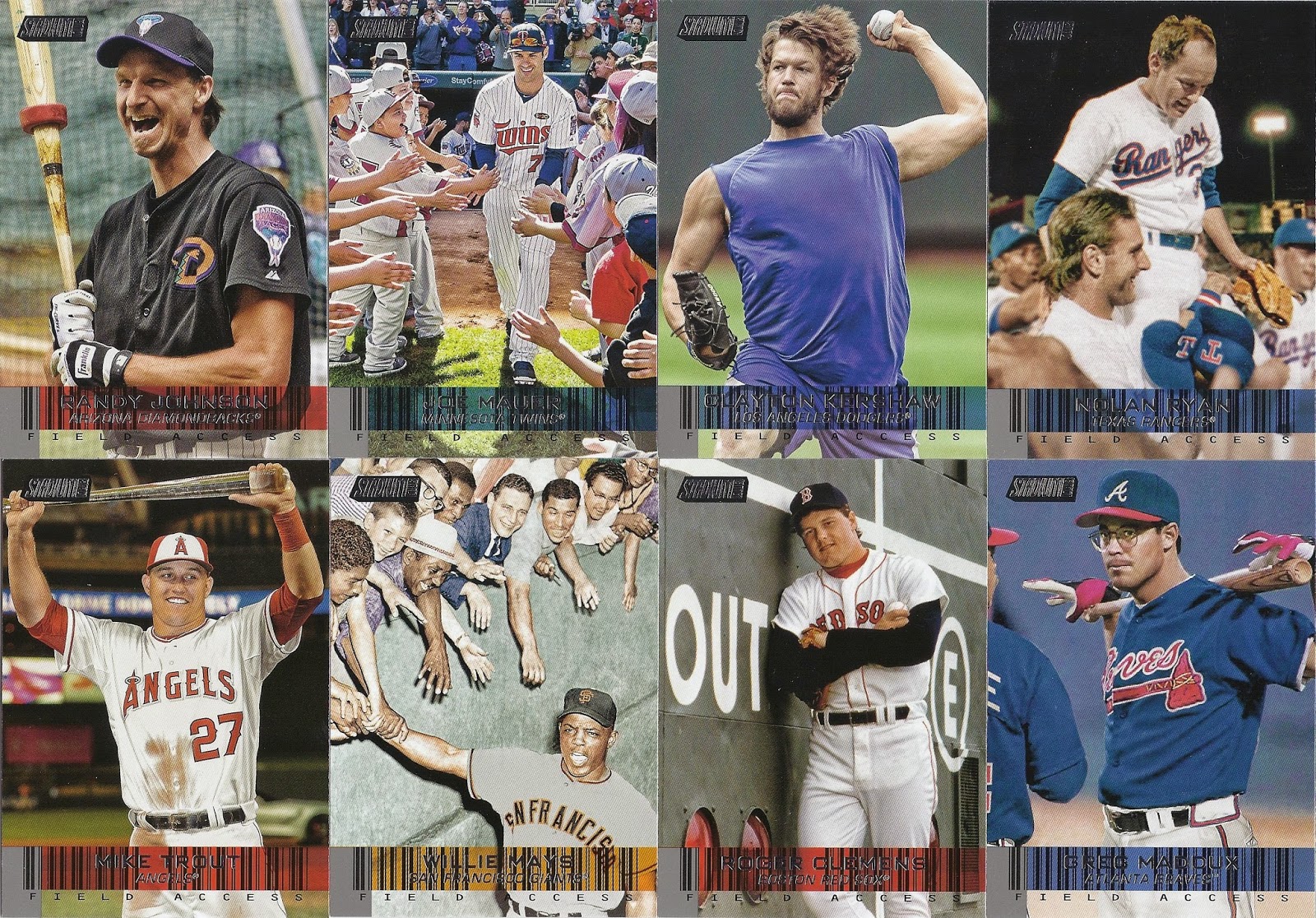 Do you know how great a Roger Clemens card has to be for me to want it? That’s a close-up of his beloved/beloathed ’91 Topps issue where he’s leaning against the scoreboard. You know the one.

Here is the Rainbow Foil version of the Griffey: 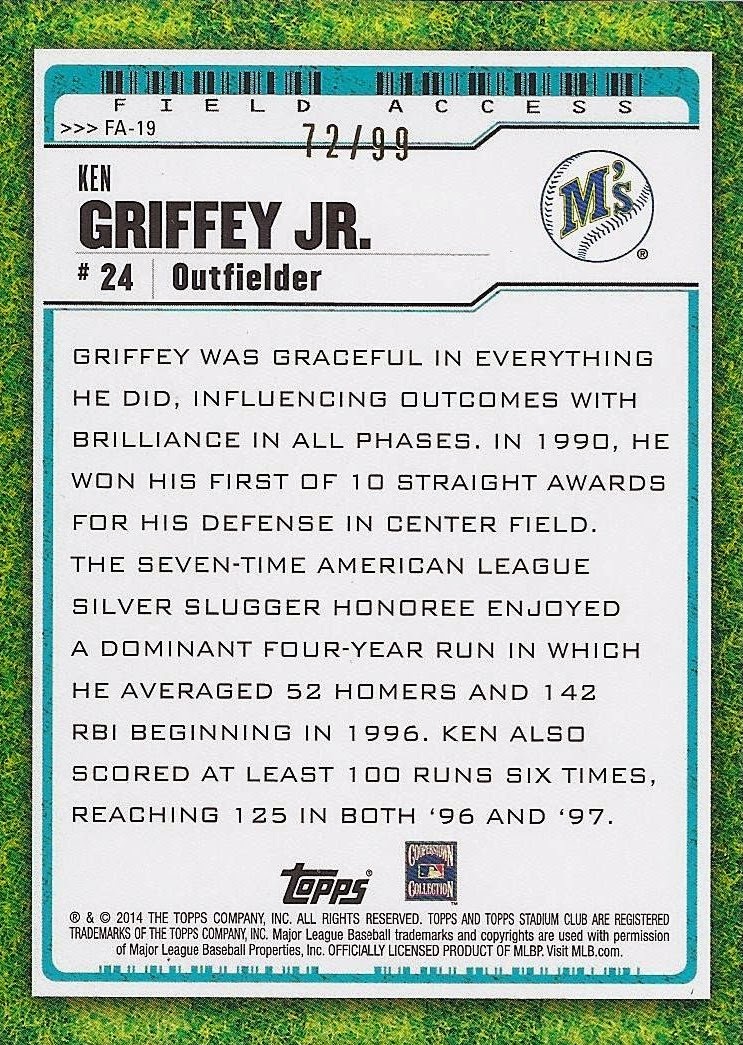 Yeah, not all that different. 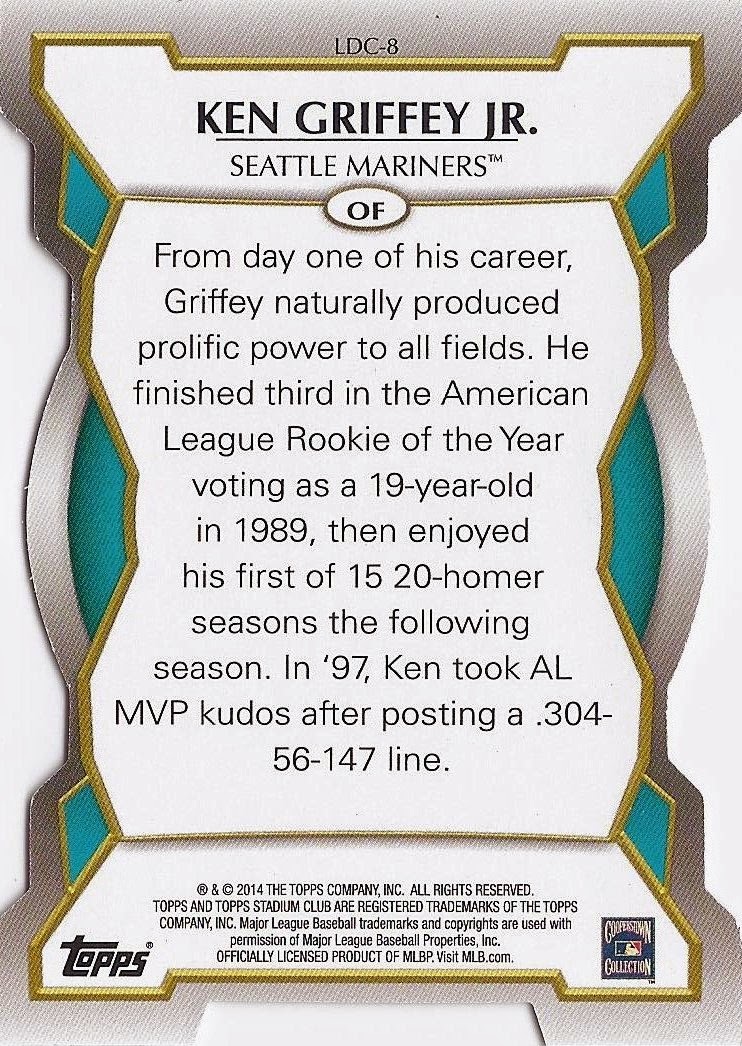 The Legends Die-Cut insert is a reasonably cool filler insert. I say filler in that it’s an insert for the sake of an insert, there to take up space in the not-so-rare part of the hit distribution spectrum. It’s techy, too, a quality common among filler inserts. Check out the intricate die-cutting, lots of holofoil (even on the non-parallel), and the general “neato” effect. Somehow even with that crazy front they managed to make the back look like the back of every Topps flagship insert since 2011. Nothing against the blurb, but I swear I’ve seen this card back before. And with a whopping 14 corners to potentially ding and a two-pronged bottom that is anything but penny sleeve-friendly, this thing is a serious cardboard liability.

As for the Griffey of this set, I love the time period as indicated by the gold MLB Anniversary patch and that great teal jersey; but the photo they used here is dark, blurry, and awkward. In a set so full of above-average cardboard, this card is just a little more meh than I’d like it to be; but I bet the kids love it.

Here's a bunch of better cards from that set: 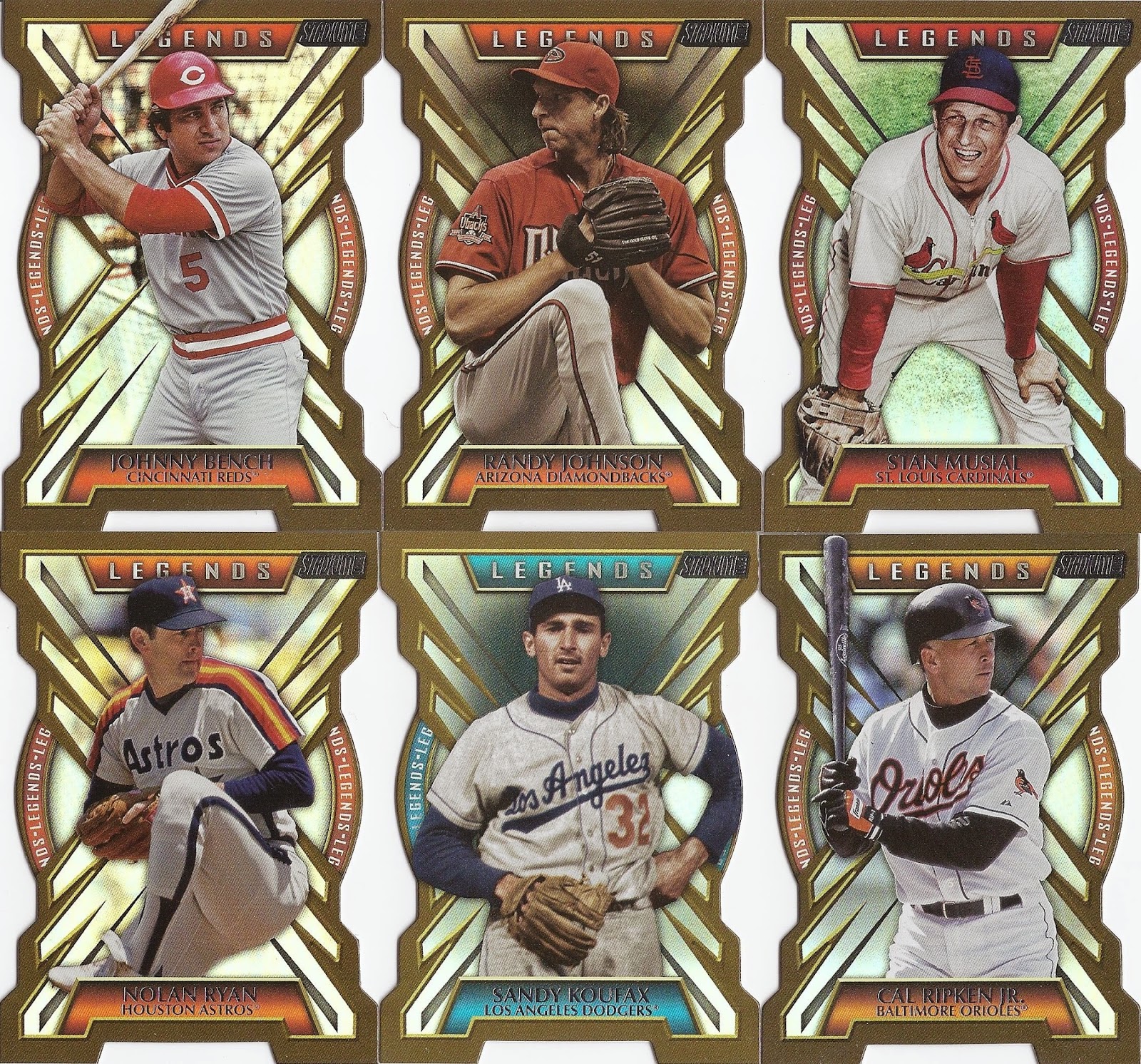 All better than the Griffey.  Sigh. 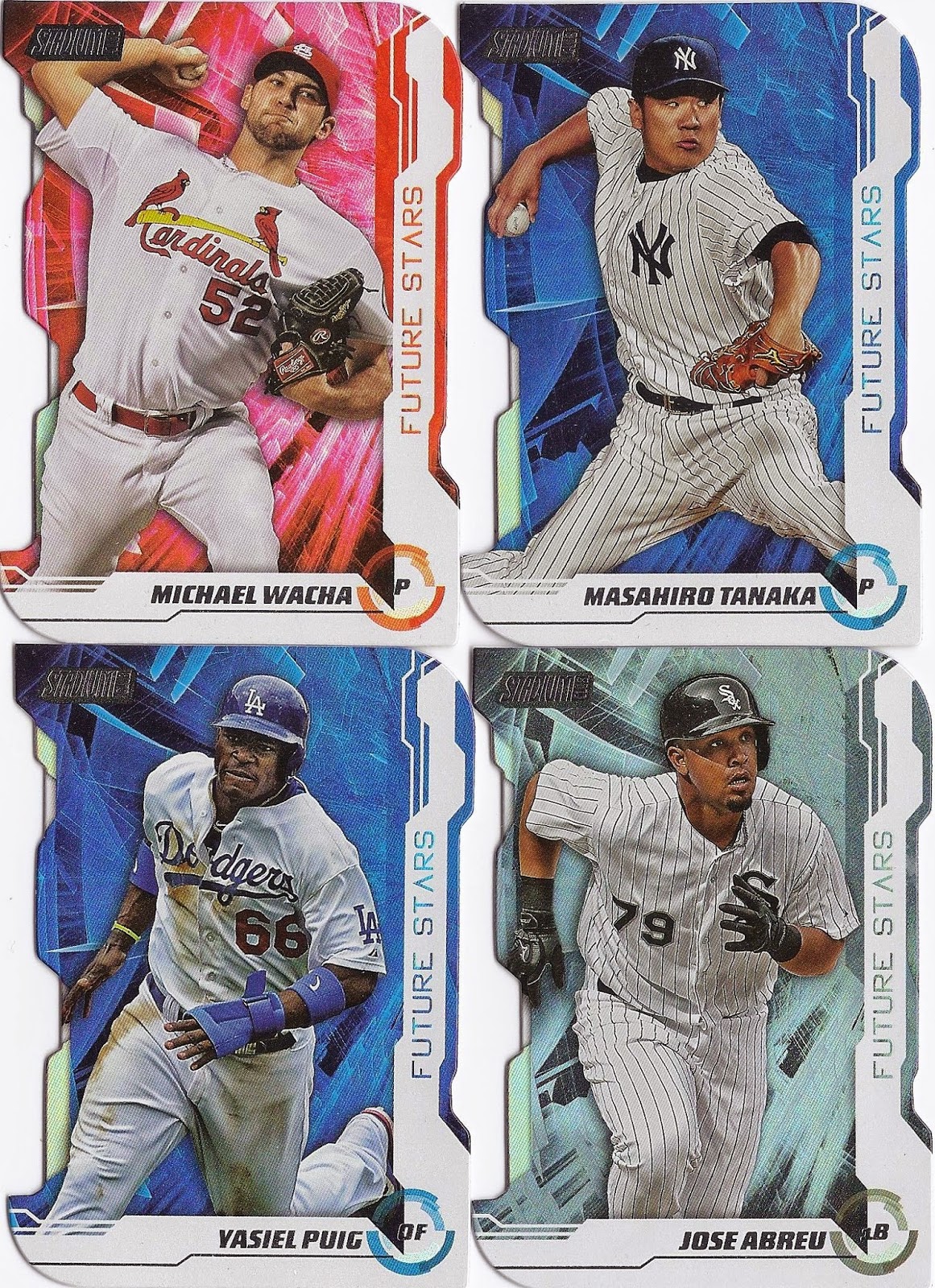 Another filler insert with a rookie focus is this Future Stars die-cut number.  They're cool and techy like the Legends insert but not on my collecting radar.

That's everything I have, but there are a bunch more great inserts to be had.  There's a cool-sounding Co-Signers insert that features a Greg Maddux/Randy Johnson dual auto.  There's a Griffey/Trout, too, but that Johnson/Maddux is like a dream card.  Also the set features a 1991 Stadium Club Buyback signed and numbered out of only five.  People tend to poo-poo buybacks, but I wouldn't kick one out of the binders.

In all I have very few complaints about 2014 Stadium Club. It really is fantastic. Sure the autograph hits leave a little to be desired considering the MSRP of a box, but the quality is there. Maybe reduce it to one auto per box and increase the quality of the auto checklist? Apart from that I’m very much looking forward to a 2015 set. Oh, and I’d like to formally put in a request for the return of the Matrix parallel.

Here are the Griffeys I need from 2014 Topps Stadium Club as of this post:

In closing I must say, knowing full well that pride goeth before the fall, that I totally called this. The set, I mean. Heck, I’m probably downright responsible. When I wrote the Stadium Club Design Timeline (probably my favorite of all the timelines), I ended it with a request that Topps bring this brand back. Here’s what I said back on July 17th, 2013:

“Bringing back Stadium Club seems like a no-brainer to me. Topps owns it, right? They have the MLB license, and they use it to make a half-dozen or so other brands that I don't buy. Meanwhile this great brand with an awesome history is just sitting in the barn. What is the holdup?“

If you're looking for someone to spearhead the project, Topps, I'd like to throw my hat into the ring. Who better than a seasoned collector with good taste and an appreciation for the brand's core aesthetic to help resurrect a classic set? I am not kidding. Let's make money together.”

Anyway I’m still waiting for my commission check. Or just a “thanks for the input” with a complementary box or two. There are a lot more bright ideas in this noggin…
Posted by The Junior Junkie at 8:30 AM