Not every post can be a Fonzie. Sometimes there must be a Ron Howard post, that being a post that is just a little (lot) bit nerdy. I happen to have a few such posts waiting in the wings, so I figure why not shoot them all over the Internet in a single week of unforgiveable nerdiness I am lazily referring to as “Nerd Week.” Enjoy! 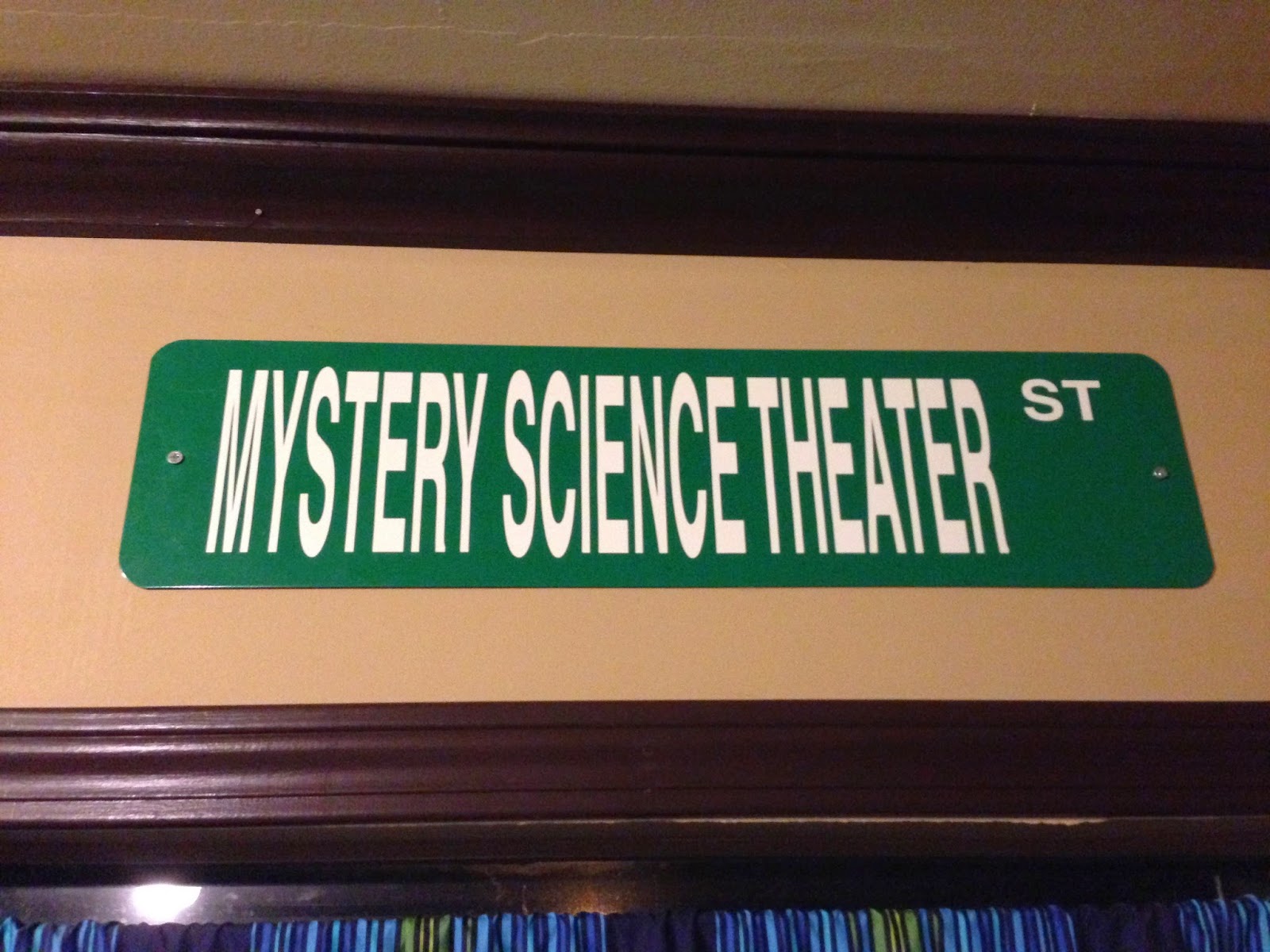 I am a massive MST3K fan. I was a huge tape circulator back in the day (I still have hundreds of source tapes I would dub episodes off of), and I have a few items in my collection that kind of put me over the top as a hopeless Mstie.  In fact, this post is by request.  Movie sign... 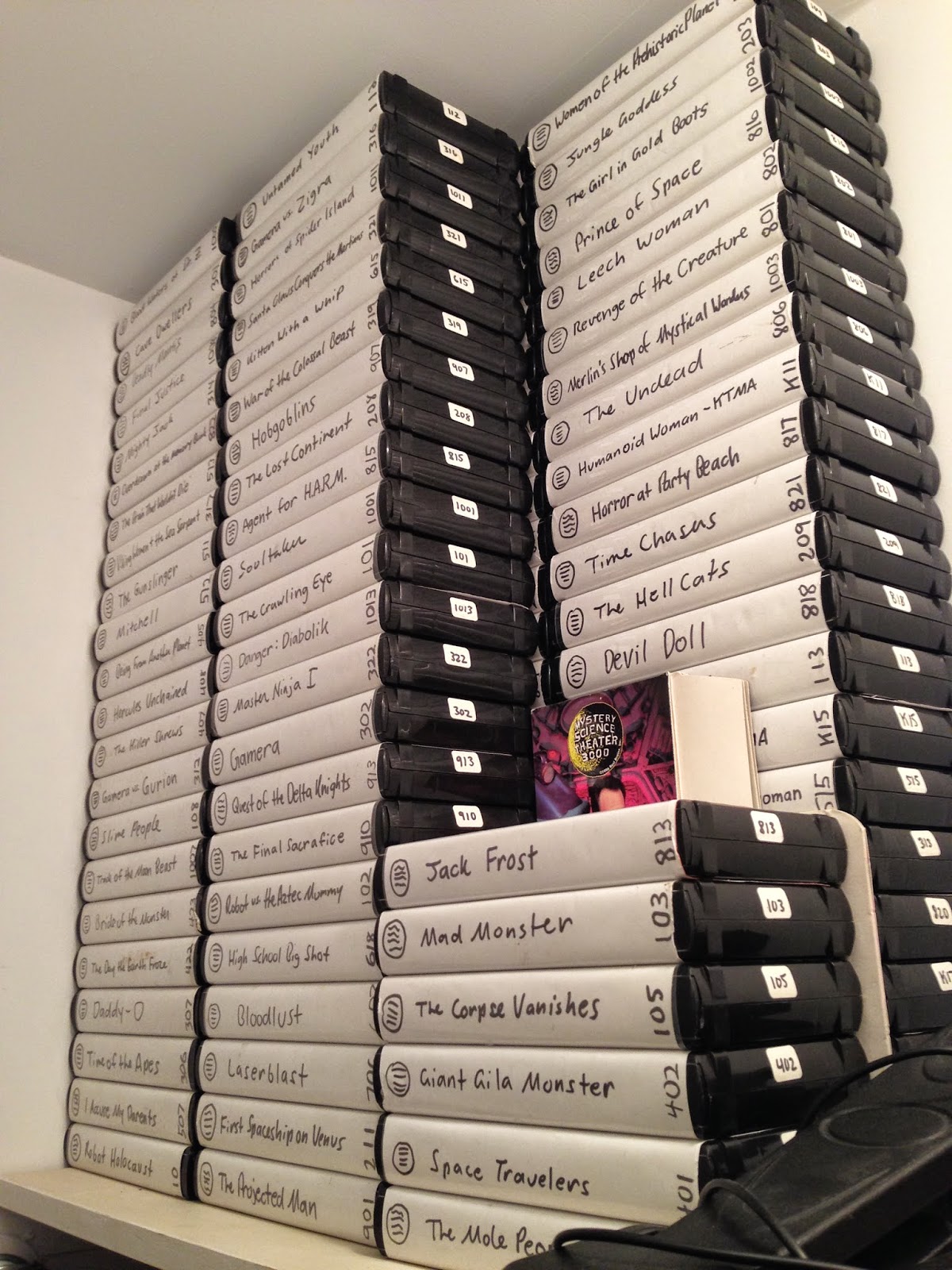 As for episodes of the show, there are ten seasons plus the original TV broadcasts from KTMA in Minnesota. The first three episodes, KTMA01-03, do not exist in any format, allegedly. Every other episode was recorded and passed along from Mstie to Mstie over the years. I have them all in digital format that I keep in a single, massive file on an external hard drive. In addition to every single gettable episode, I also have a large number of episodes in wonderful SP mode (better quality than EP, LP, or SLP – real Msties know what all those mean) still on VHS with personalized labels. I also have several VCR’s that still work which I keep in storage for if I ever need to dub again.

I’ve done a lot of dubbing in my time. 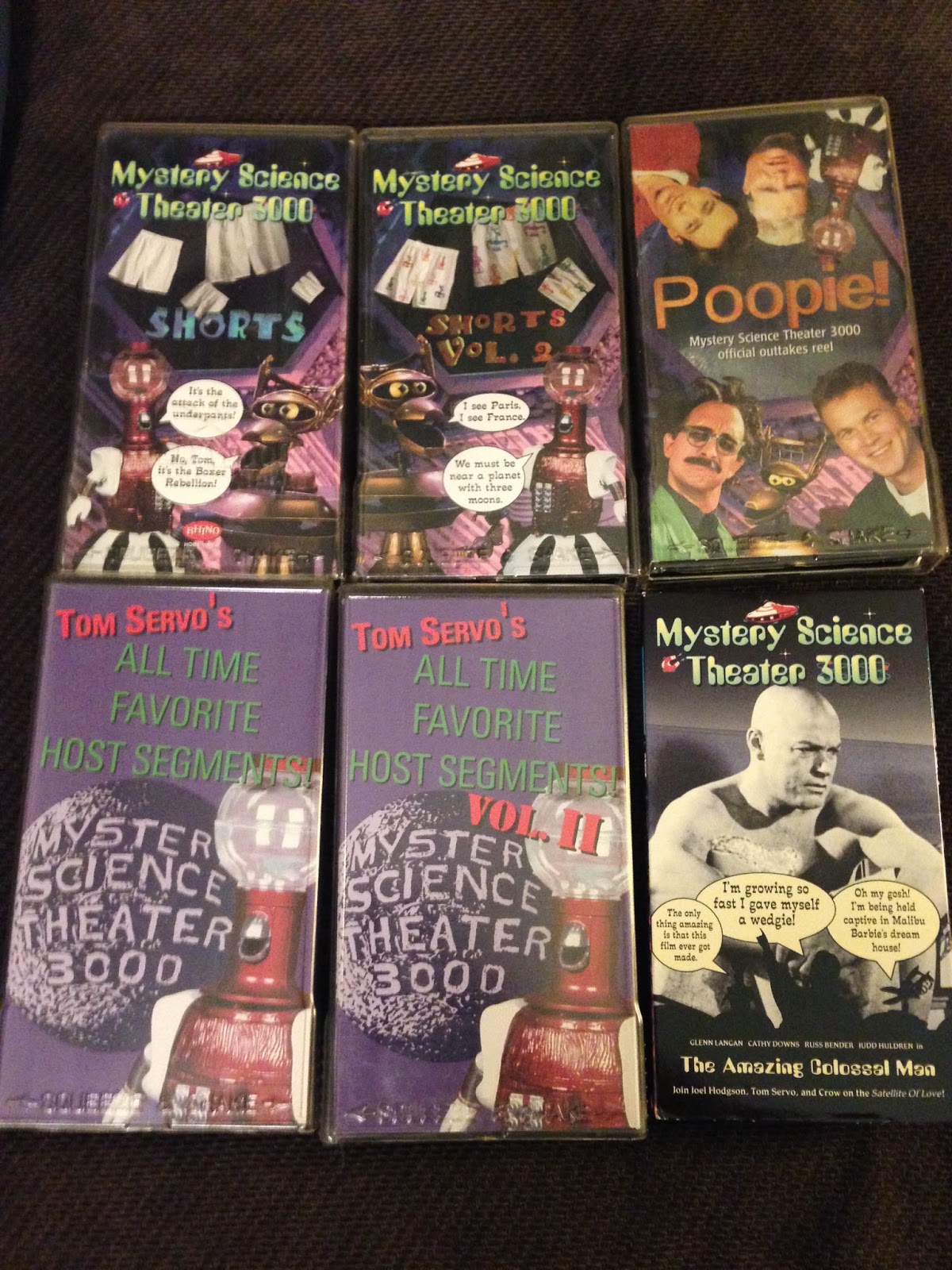 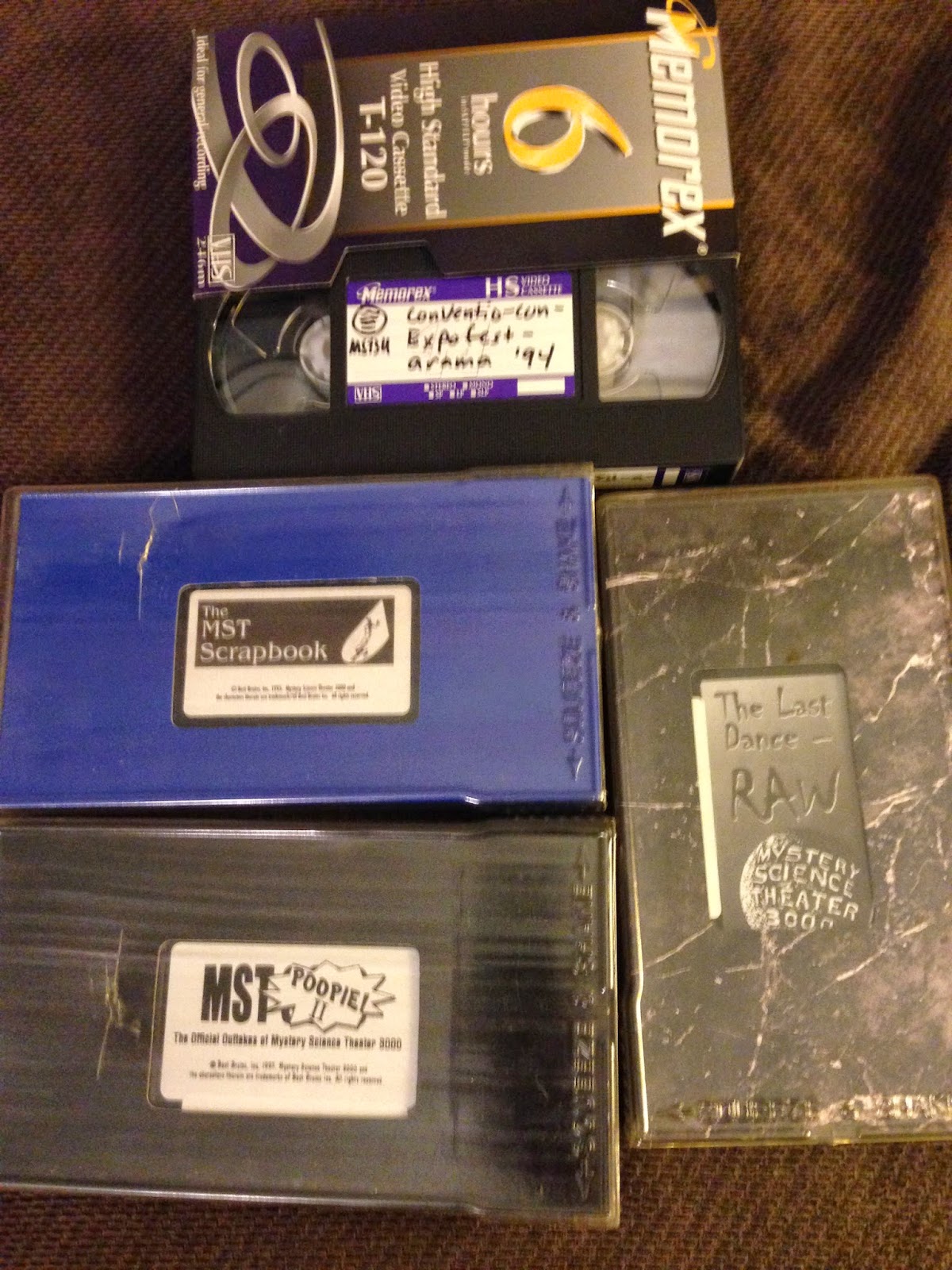 There are also a number of super-rare, fan-club-only releases of which I have the original VHS’s. These include The Last Dance RAW, The MST Scrapbook, Tom Servo’s Favorite Host Segments, and even some fan footage from one of the few Expo-Fest-Convention-Con-o-Ramas. That’s only a few of them. These are irreplaceable except on eBay and for probably way too much money.  That Rhino copy of The Amazing Colossal Man used to be the "forbidden episode" and go for a fortune ($60 +) on early eBay.  I found mine at Hollywood Video for $9.99. 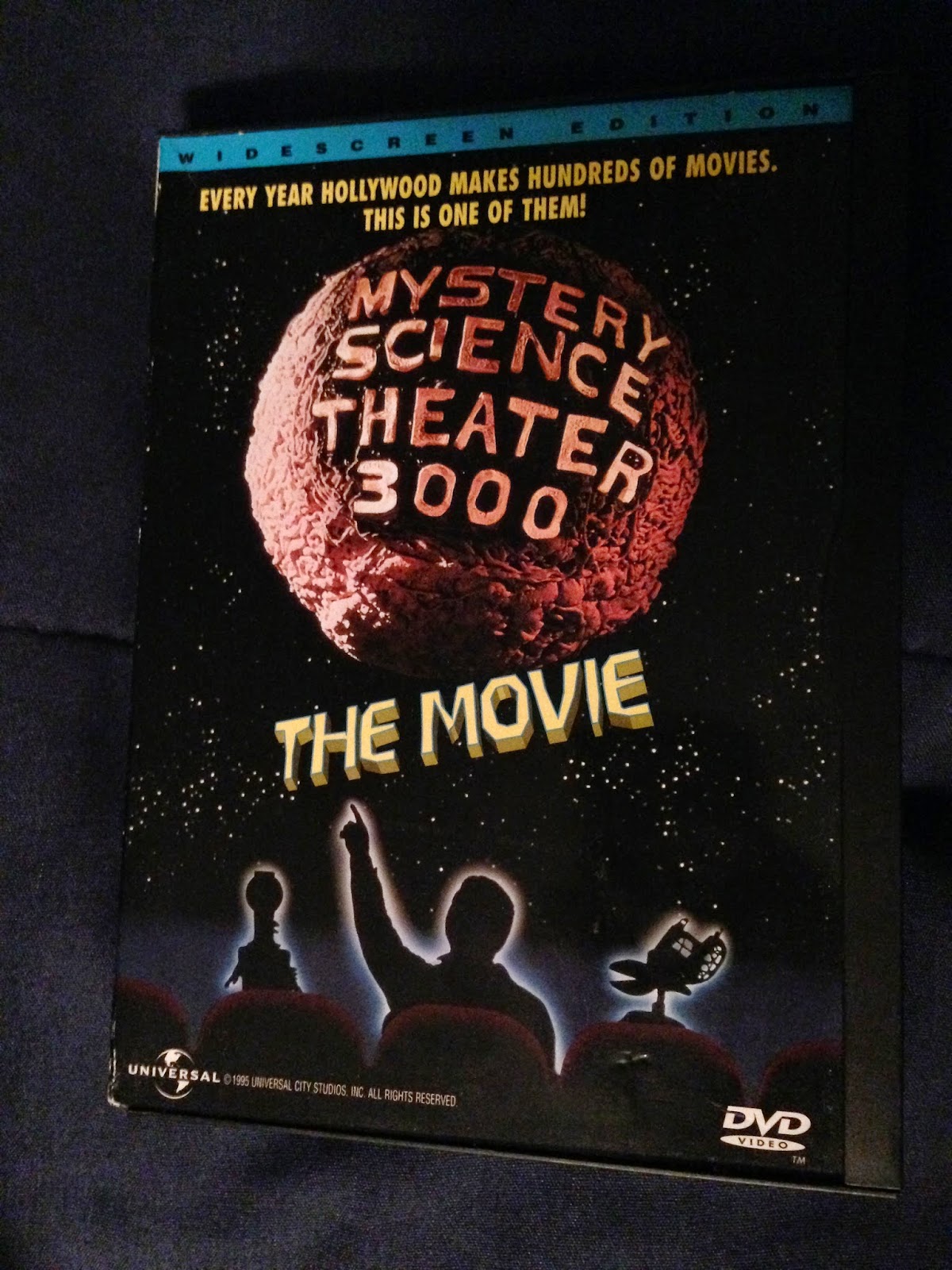 This is the first release of the DVD.  It was discontinued for years before being re-released a few years ago, but in that in-between time it went on the 'Bay for over $100.  It was crazy, and lucky for me I found it used for incredibly cheap.  Looking back perhaps I should have sold it when it was going for a lot. 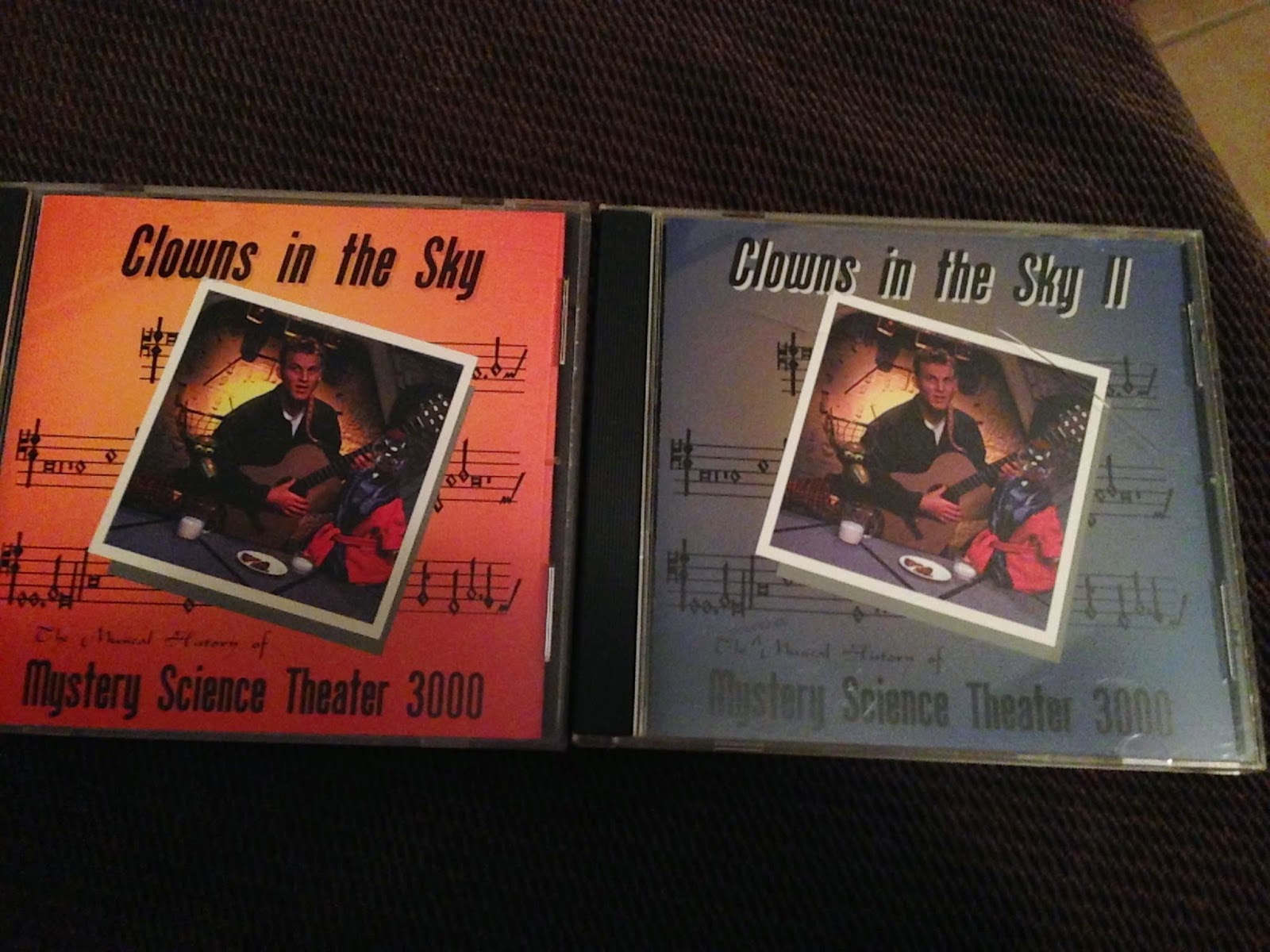 These I doubt I'll ever sell.  They are original silver-bottomed discs you could only get through the MST3K Info Club.  They are hilarious listens to this very day.  Check out the backs: 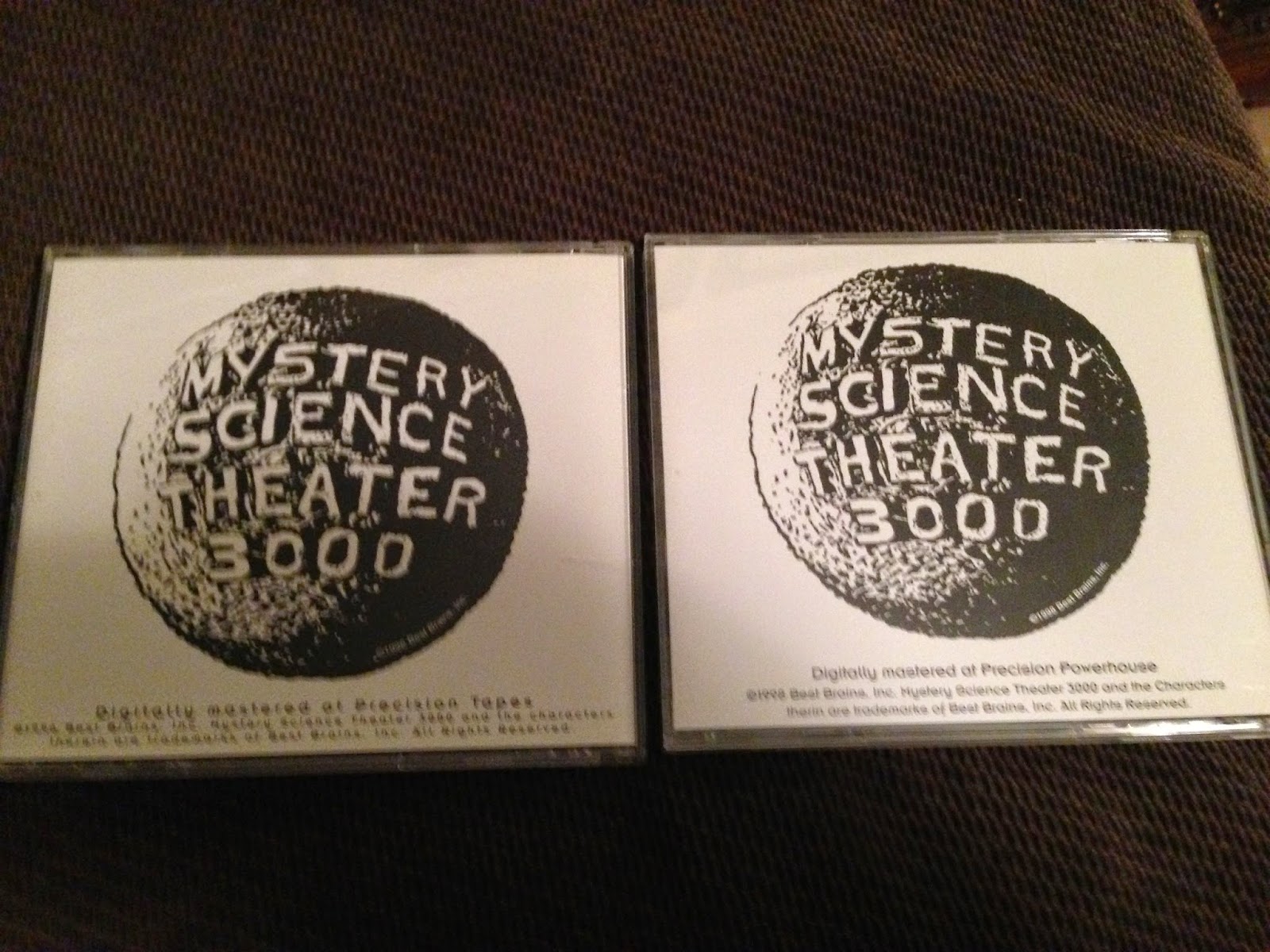 How perfect is that? 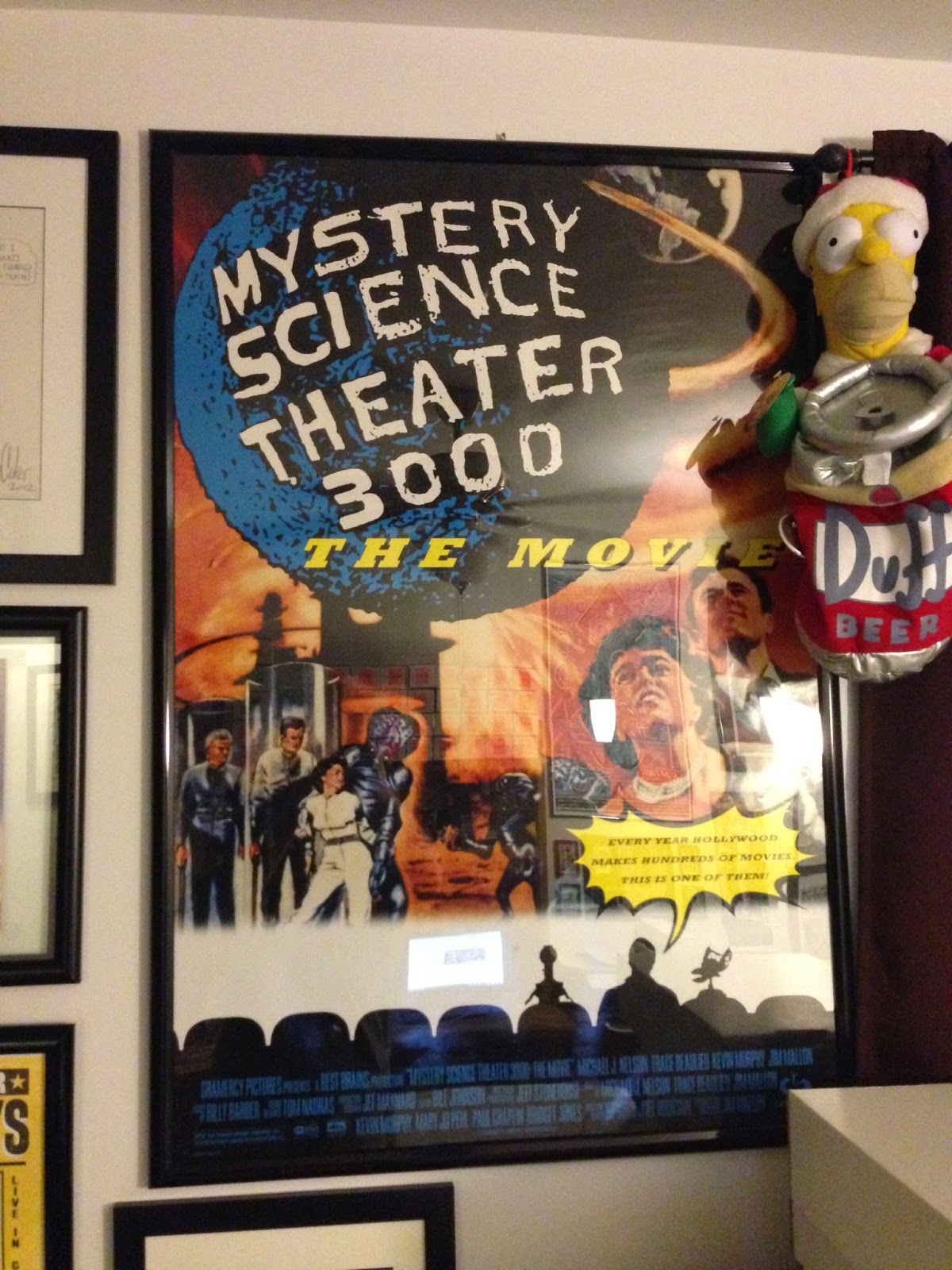 Here is the original theatrical double-sided marquee poster.  It's massive at 41" x 28", and I have two of them.  The one in worse condition hangs proudly here in my home office.  The good condition one is stored archivally and flat.  You should see that box.  My wife hates it. 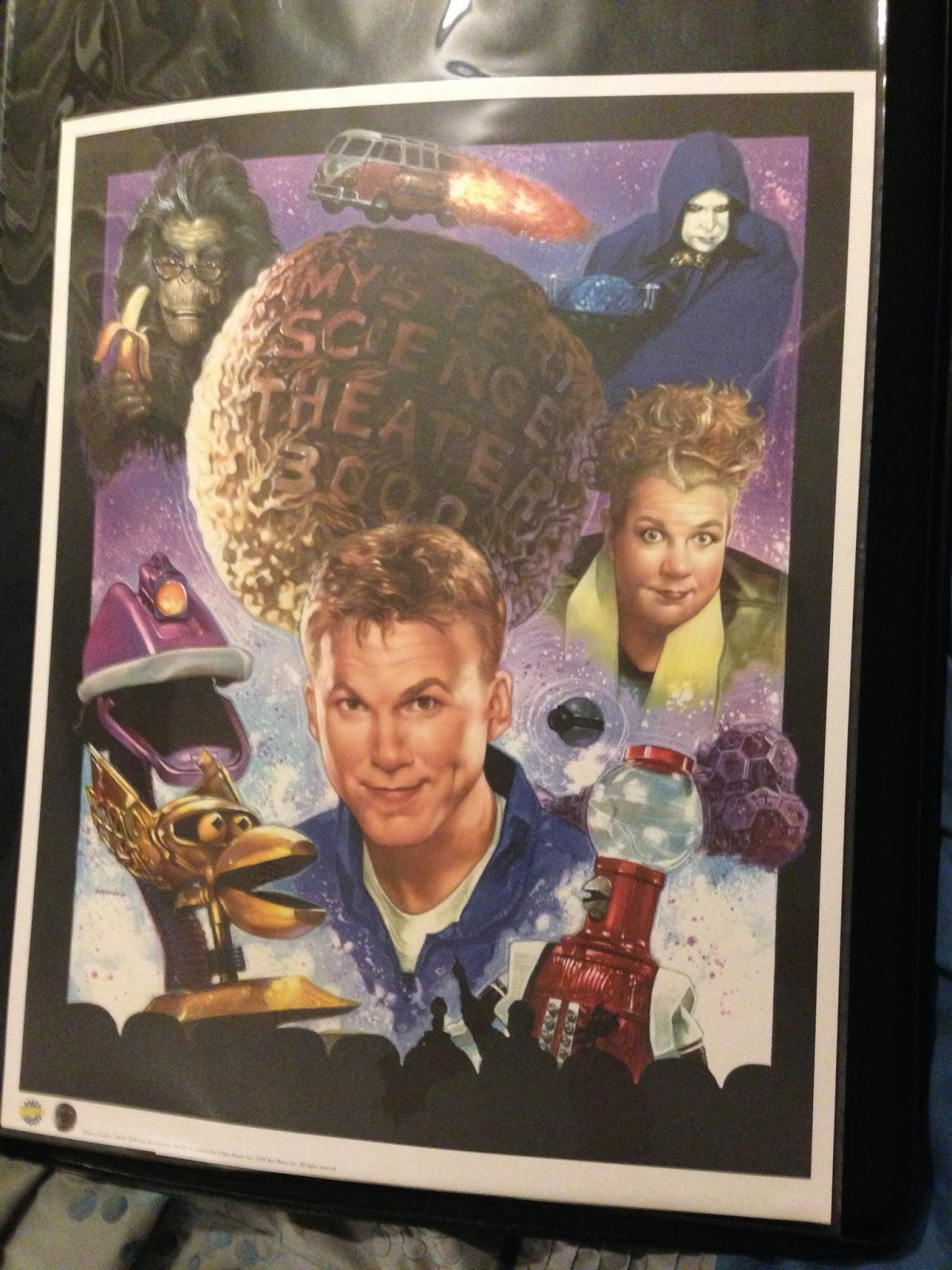 This is a limited-edition lithograph sold through Wizard magazine (remember that?!).  It's unframed right now, but the quality is excellent.  I used to have two, but Lord knows what happened to the second one.  Someday when I have more walls... 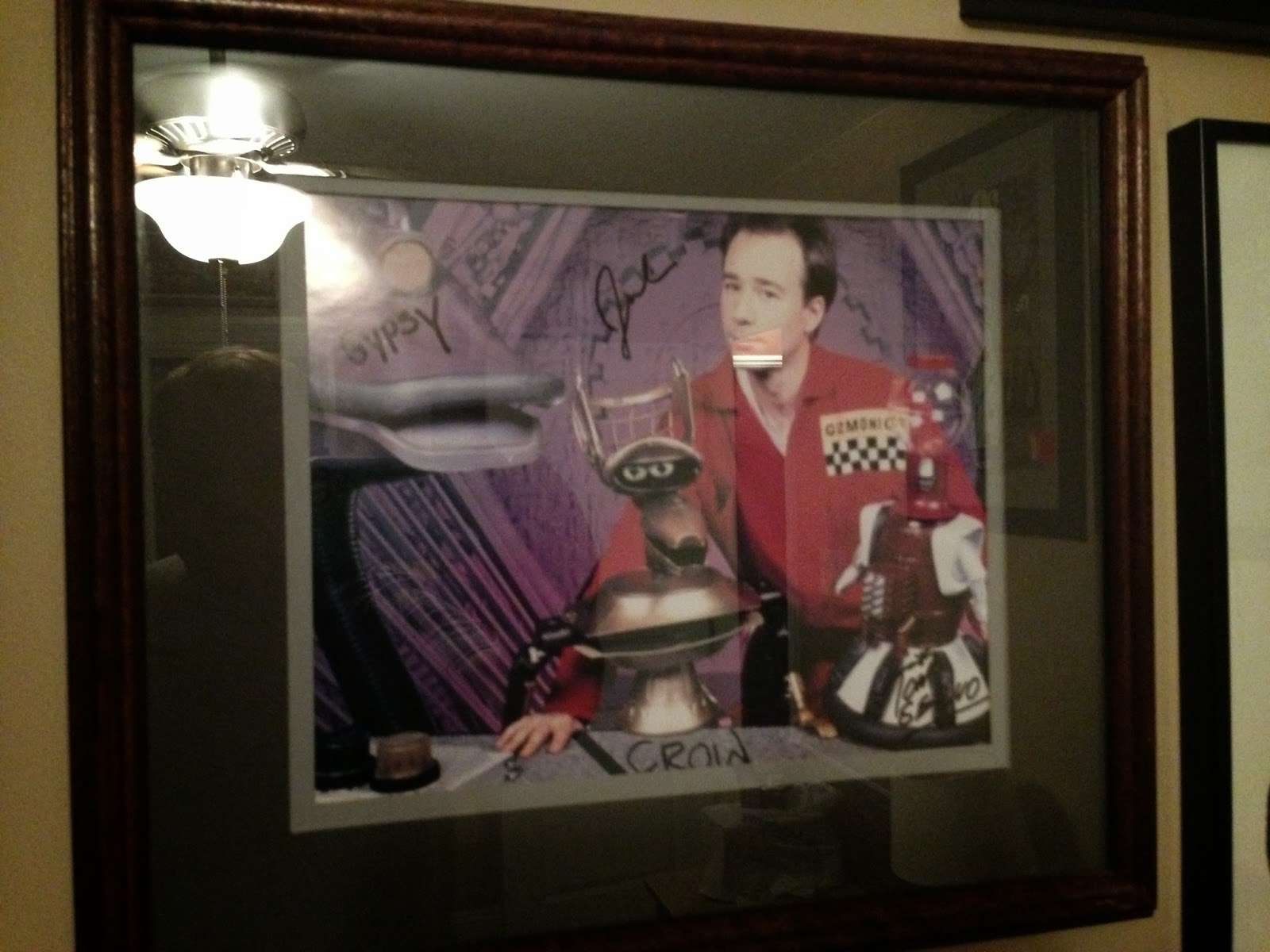 Here's an 8 x 10 of the original cast with fake autographs.  I bought it already matted and framed for ten bucks at a garage sale.  A local neighborhood garage sale with this.  What are the odds? 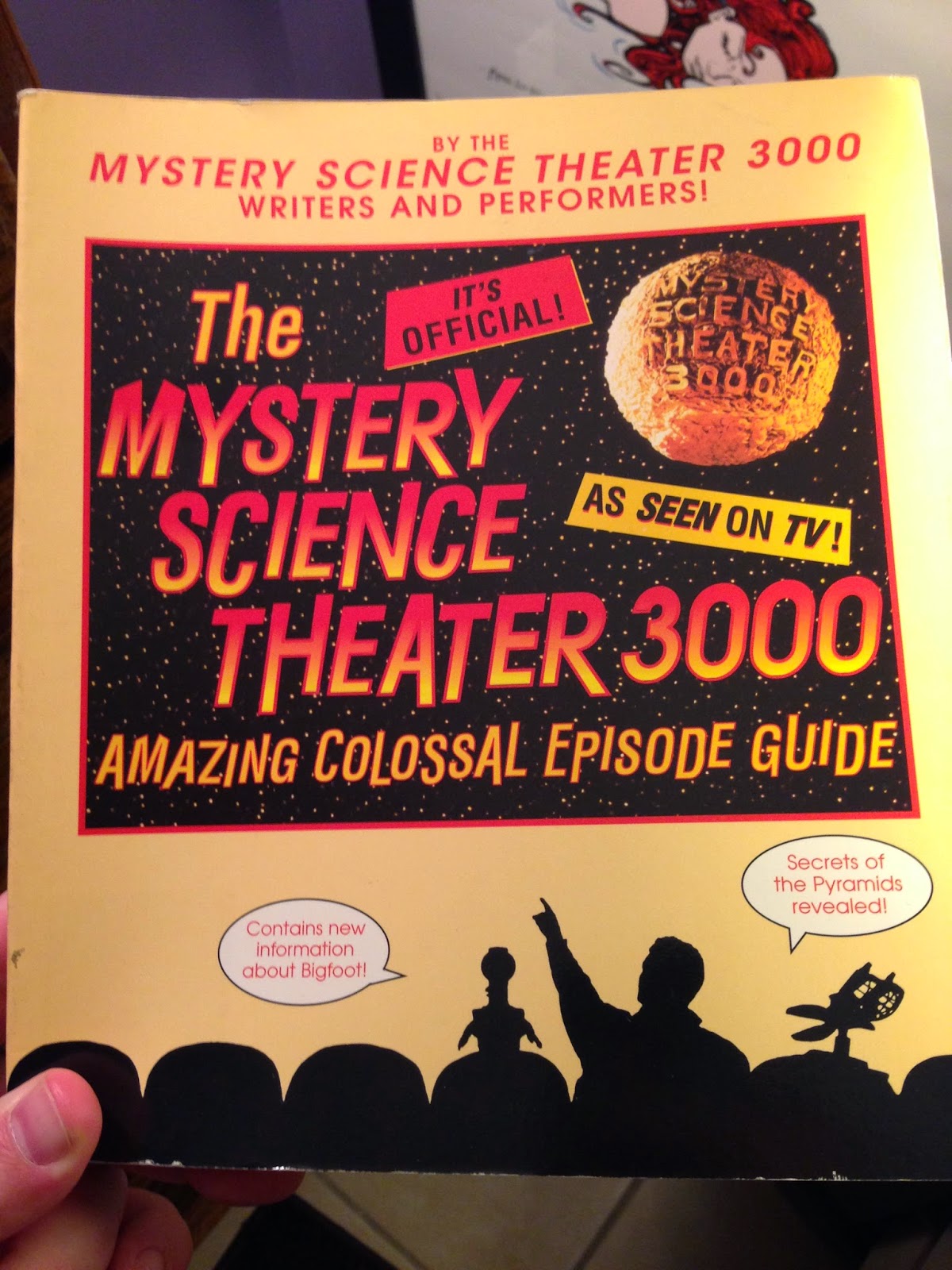 And, of course, the obligatory Amazing Colossal Episode Guide.  I laugh hard just reading descriptions of the host segments in this book.  It is a gem and sits on my evacuation shelf with all my photos.

That stuff is fun, but the best evidence of my MST3K nerddom is in my prop collection: 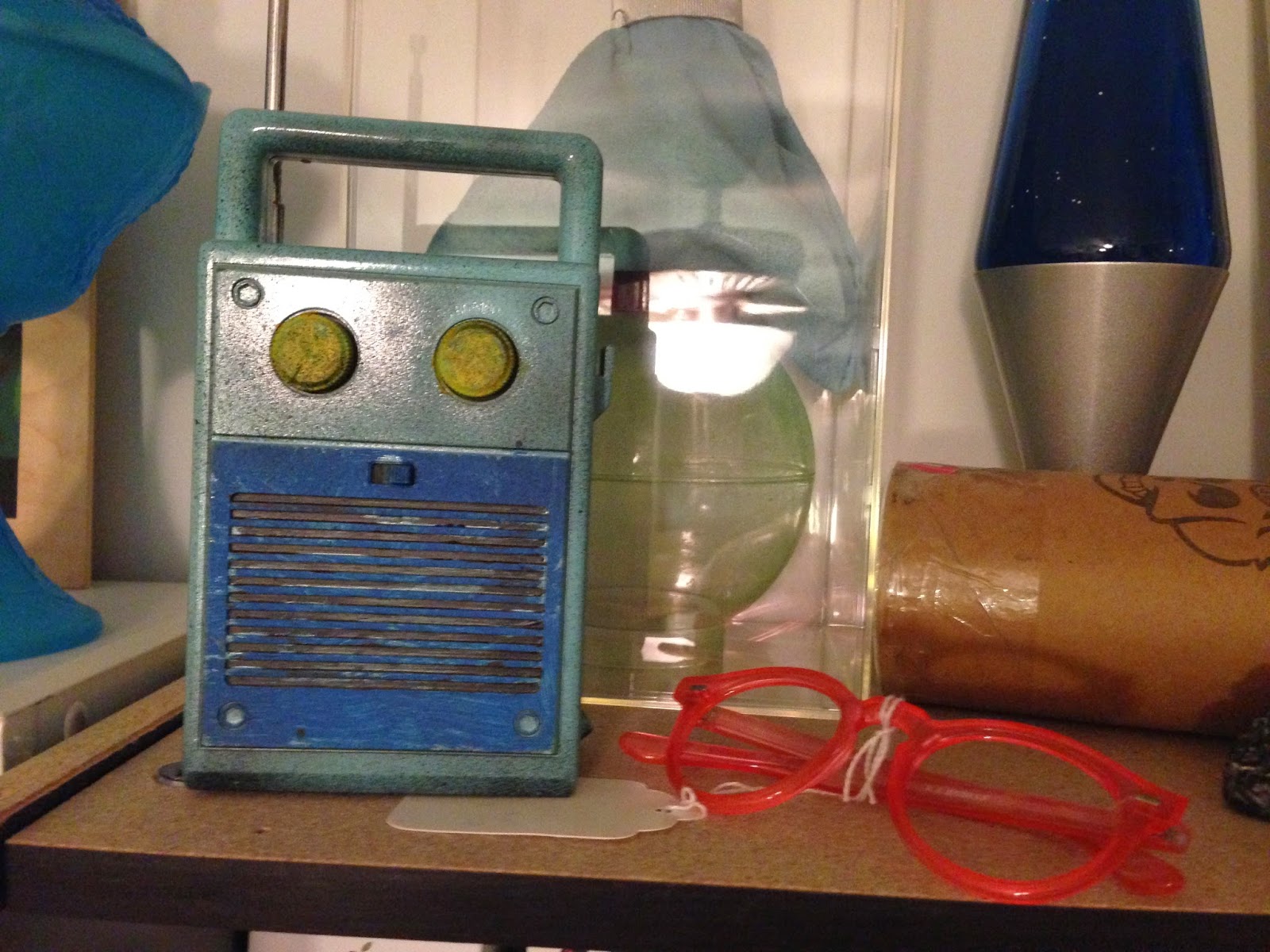 In 1999 when Best Brains, Inc., the company that made the show, went out of business they started taking things from the set and selling them on eBay with signed certificates of authenticity from the prop diva, Beez McKeever. You remember her from the credits, right?

I won three of the auctions and ended up with Pearl Forrester’s glasses, a baby monitor used as a bomb detonator, and a real, genuine, authentic, honest-to-goodness, camera-used Tom Servo head. 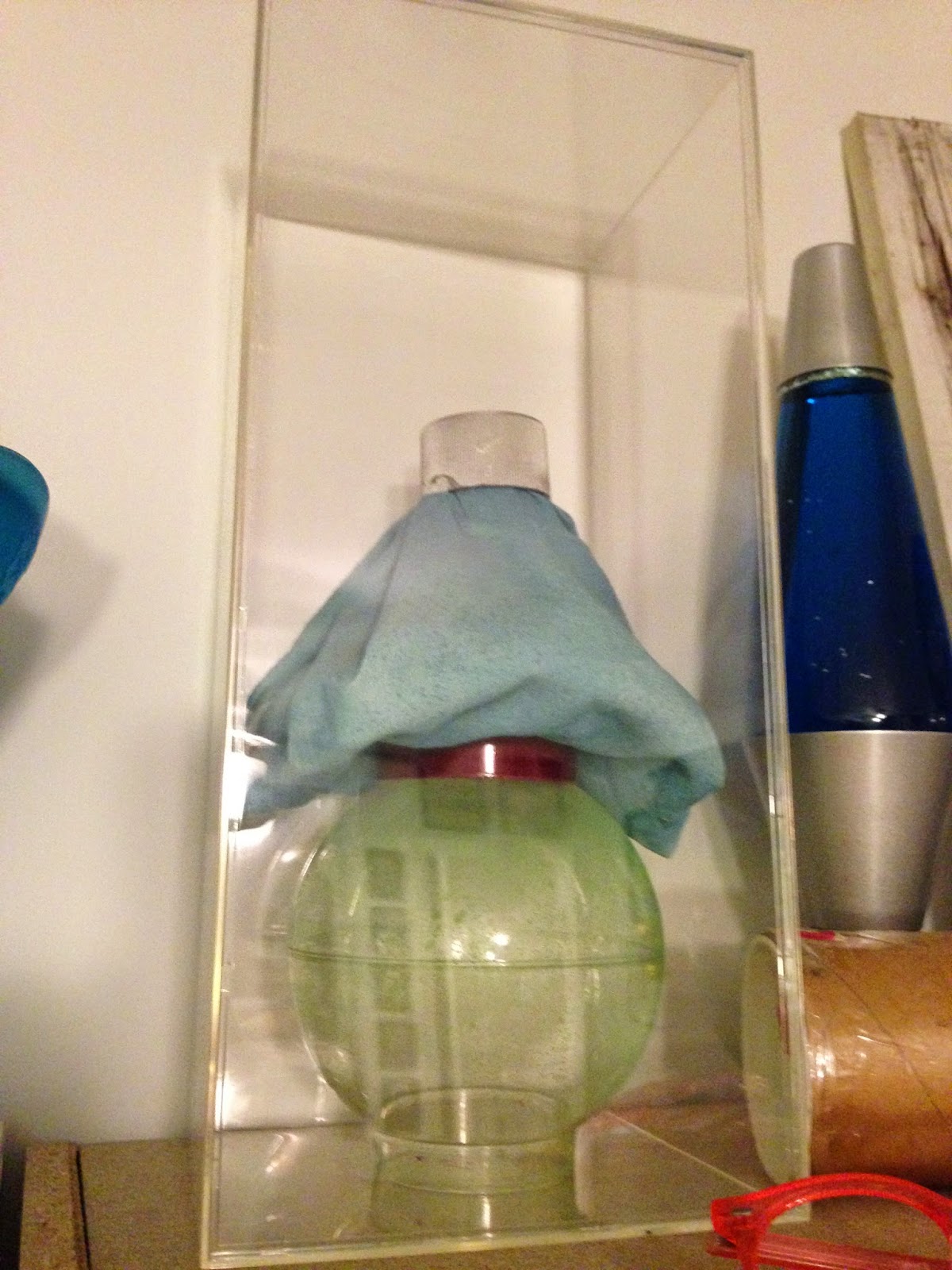 That Servo head is one of my prized possessions. I bought a special case for it and everything. It has come with me on every hurricane evacuation I’ve ever been on. That’s thousands of miles and many days’ worth of hours in the car.

I won’t say what I spent on the three props I bought, but I will say it was a lot of money to me back then. If those auctions happened today I would happily spend triple what I did. There was also one prop I missed out on by just a few dollars due to a computer error. It was a basketball covered in spray paint used as a planet during the opening sequence. There’s not a lot I regret in my life, but man. I really wanted that basketball…

I still occasionally do a search for "MST3Kprop."

I also have several t-shirts, a fan club pack with membership card, a few actual signed photos as opposed to the fake-autographed one above, all the bumper stickers and magnets from the info club, and tons more random stuff.  I also printed out hard copies of the Sci-fi part of the series which is not covered in the Episode Guide (which only goes to Season 7, I think).  Someone actually wrote the rest of the book and it never got published, but you could read it online for free.  I wonder if it's still there...

MST3K taught us a lot of lessons about life:  Make the best of a bad situation.  Don't take everything so seriously.  Stick with your pals to get you through a rough situation with a smile.  When your friends are not around, just build robot friends.  When life gives you lemons, make fun of those lemons.  And finally, it doesn't take a big budget and fancy special effects to produce quality results.

In closing, here's a quick story:  I put a "Movie Sign!" bumper sticker on my first car.  Once I came out of the Post Office to find a girl leaving a note on my windshield that read, and I quote, "Your MST3K bumper sticker rules! Keep circulating the tapes..."  I should have proposed on the spot.  I wonder what she's doing now. Probly bein' awesome somewhere.  I still have that note.

If you’re feeling saucy and want to check out a great episode of this show, allow me to recommend Space Mutiny.

See you tomorrow, fellow nerd!
Posted by The Junior Junkie at 8:30 AM