Not every post can be an Alpha Beta. Sometimes there must be a Lambda Lamda Lambda post, that being a post that is just a little (lot) bit nerdy. I happen to have a few such posts waiting in the wings, so I figure why not shoot them all over the Internet in a single week of unforgiveable nerdiness I am lazily referring to as “Nerd Week.” Enjoy!

I’ve always been a Lego nut, and as I’ve gotten older they have only gotten cooler. Nowadays we get sets that pay homage to pop culture, TV shows, and movies, the most prolific of which has been the brand’s extensive line of Star Wars vehicles and figures. 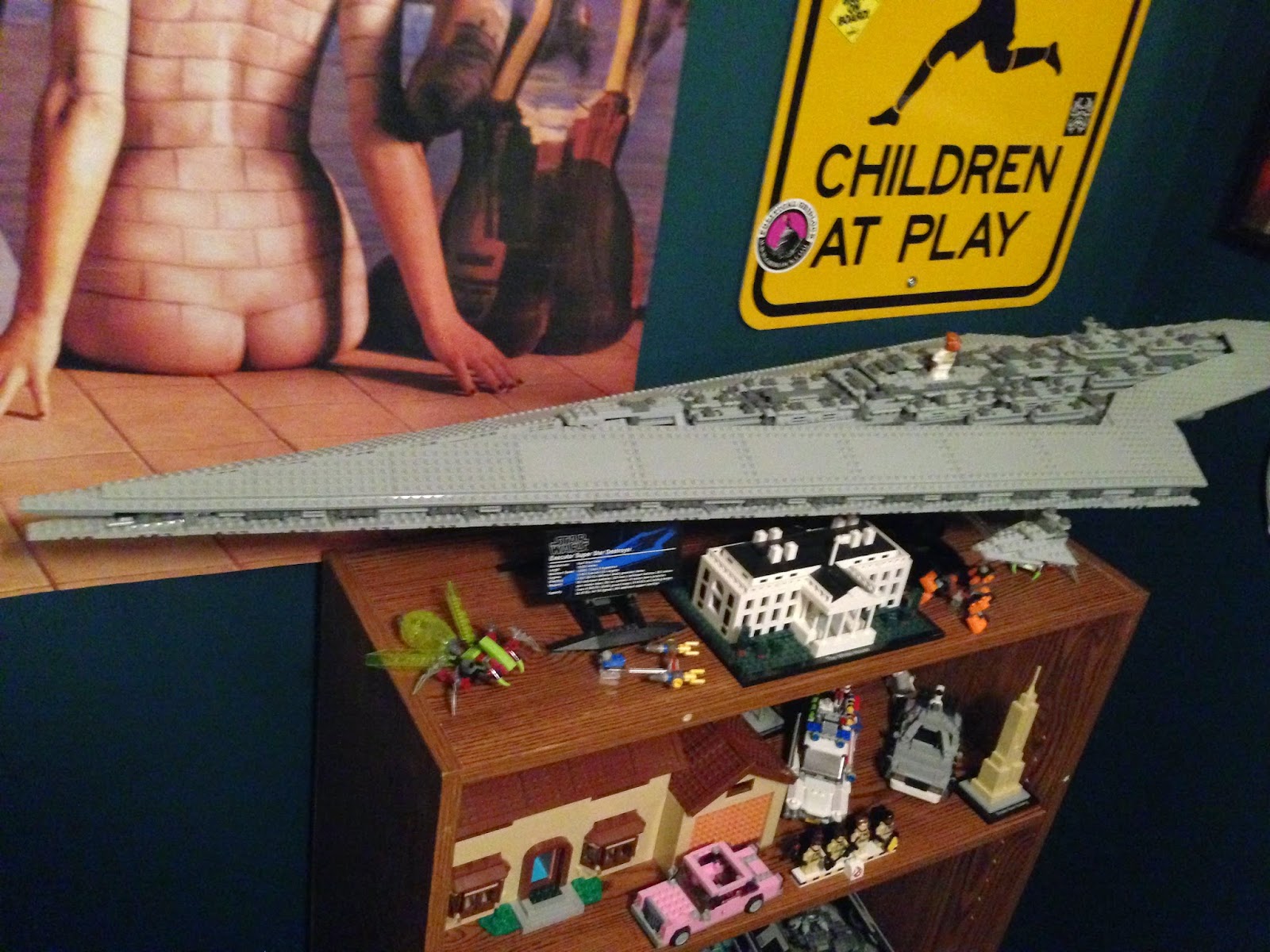 The crown jewel of my Lego nerddom is definitely this behemoth Super Star Destroyer. It took roughly 11 hours to assemble.  Please forgive the asses in the top left corner - that's a giant Pink Floyd poster in the back room of my man cave where the Lego shelves live. 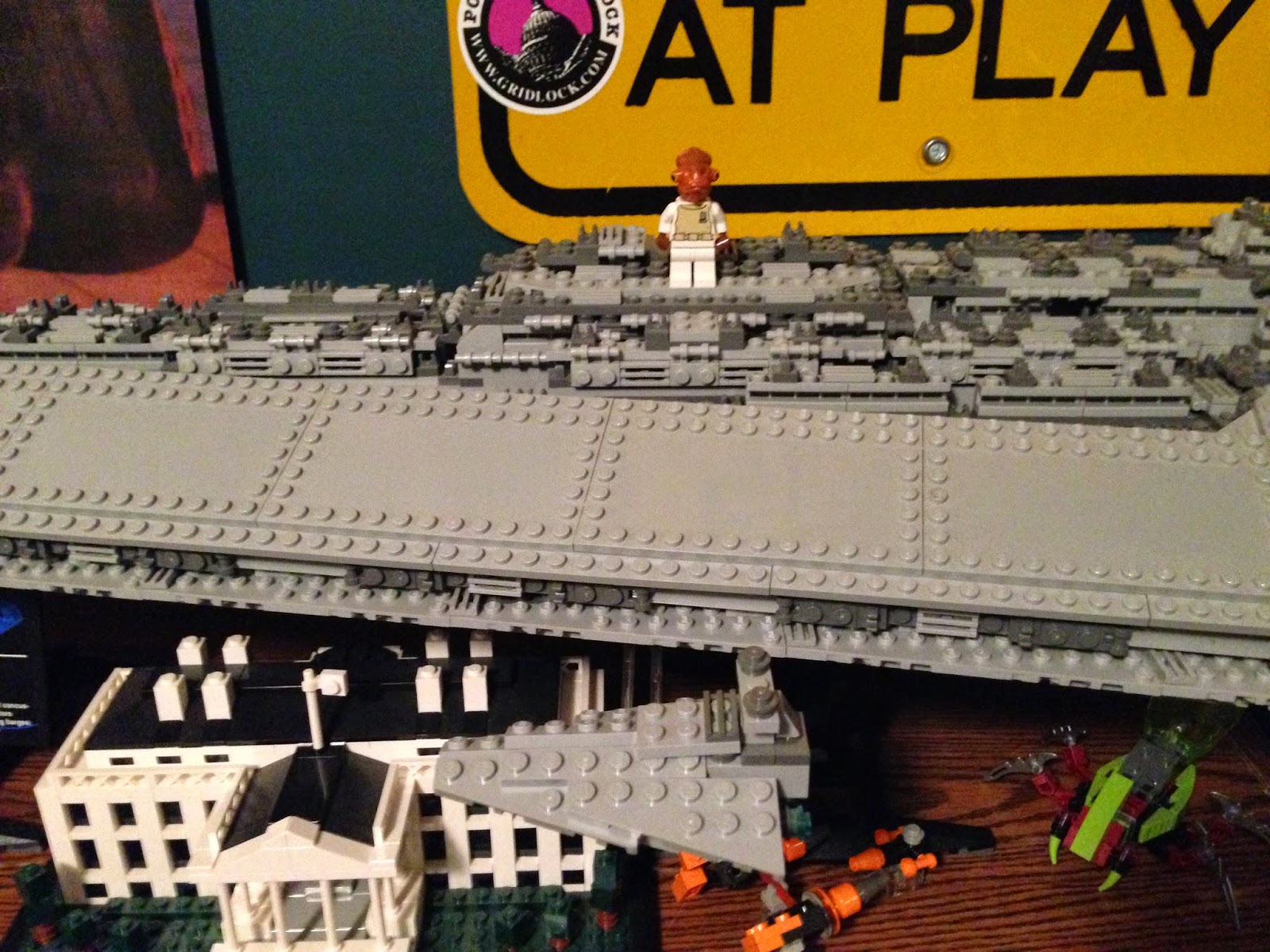 At 50 inches, the Super Star Destroyer is so big I can't really even photograph it properly.  The coolest part is this little regular-sized star destroyer shown for scale. 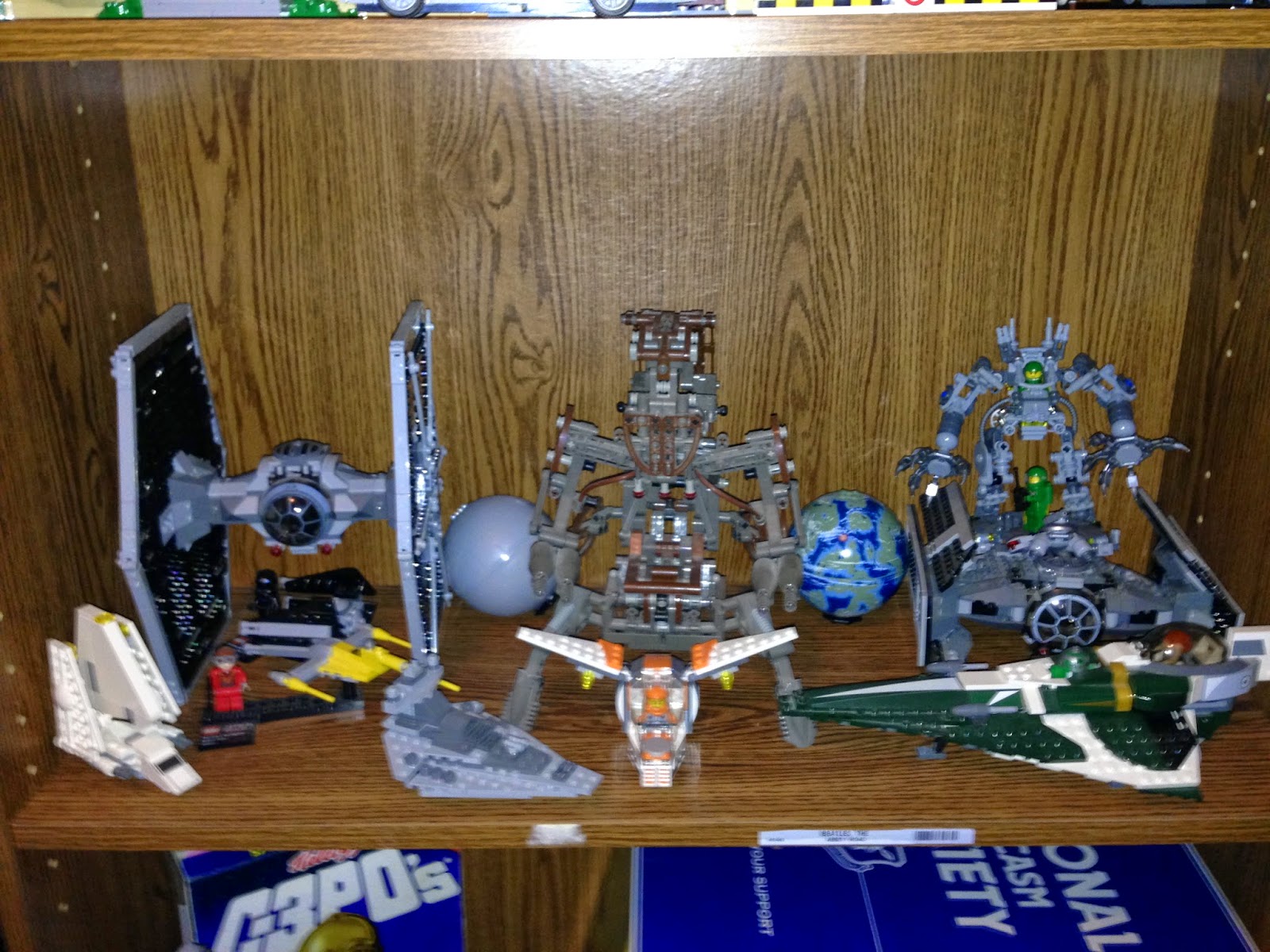 As you can see I have a fun mix of other Star Wars models and figures, too. I’m a big fan of the TIE fighter there on the left. 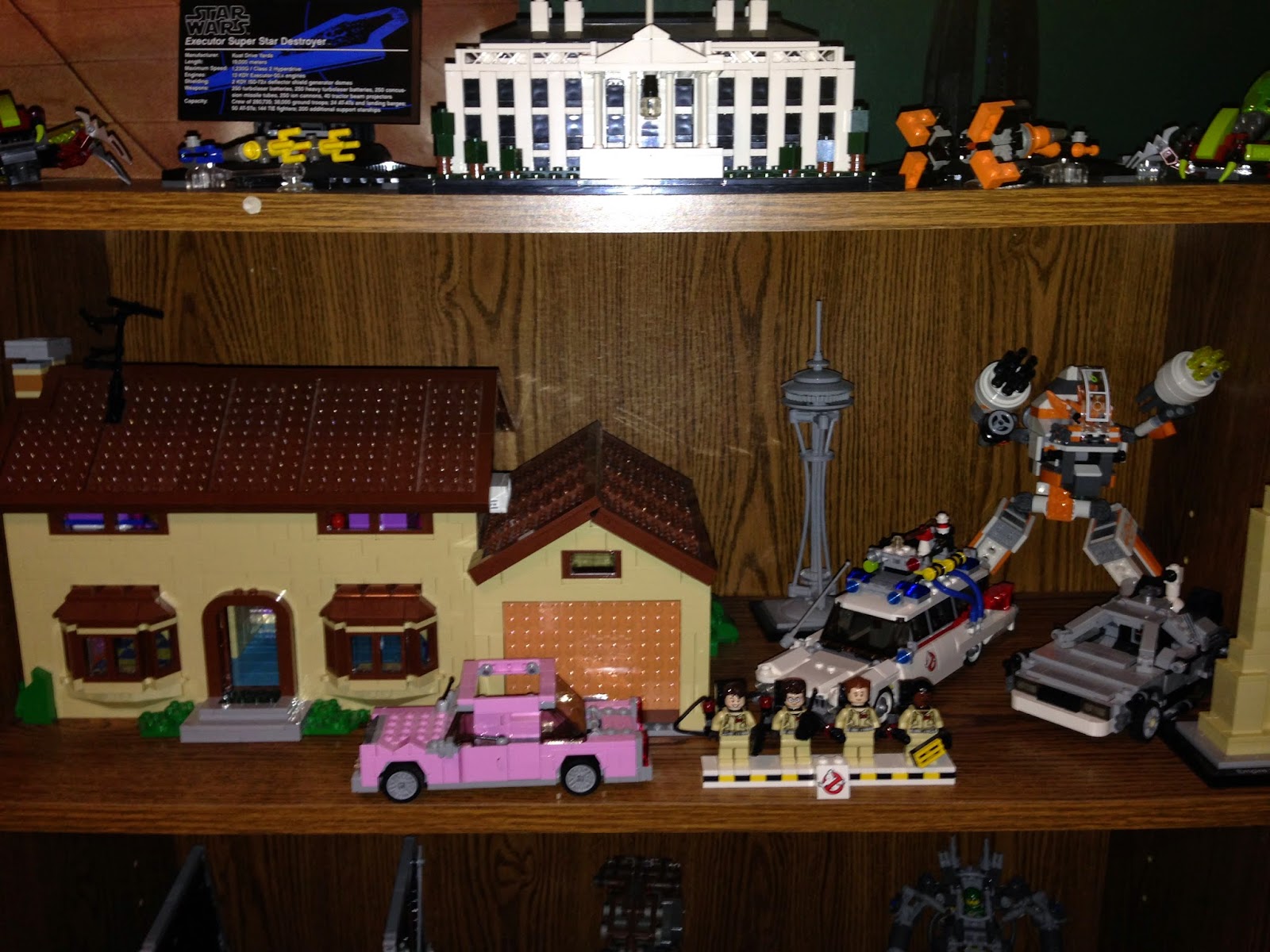 Below that on my man cave shelves are a few other fun items including the Ghostbusters ECTO-1, the Back to the Future Delorean, and the Simpsons house.

When Lego came out with the Simpsons Minifigures, my buddy Craig and I canvassed the town looking for them. It took several trips to different stores, but we eventually found a full end cap display at Target and bought the entire thing so we could bring them home and take our time feeling through the little packages until we had two of every figure. We returned the rest and called it a day. I’m happy to report that each of us now has the full first series, and we plan on doing the same thing again for the second. We are Simpsons completionists, and the Simpsons-Lego crossover cannot be resisted. 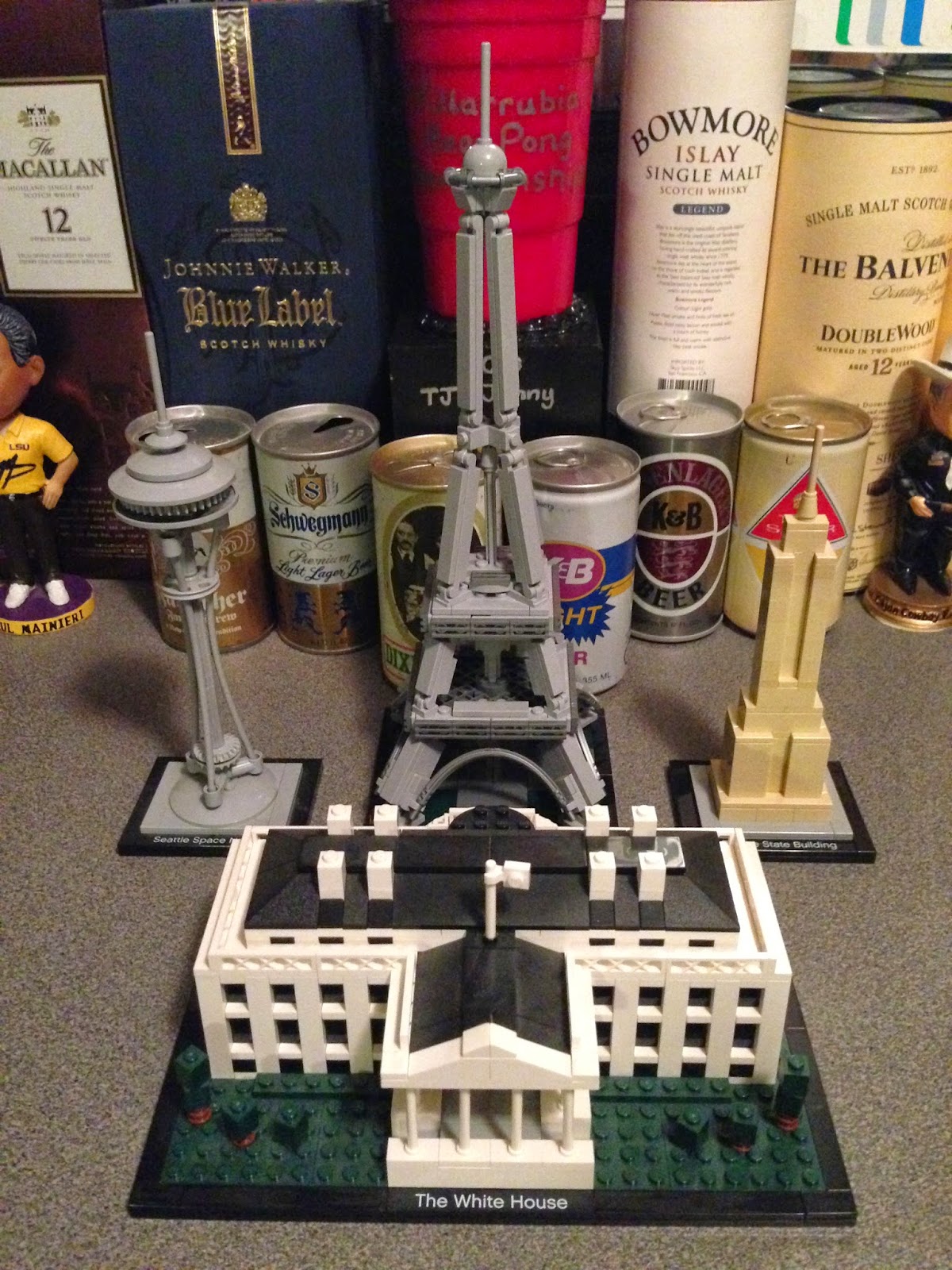 The recent line of Lego Architecture has been a blast to collect as well. Here are the White House, the Space Needle, the Eiffel Tower, and the Empire State Building in all their tiny little meticulously-detailed glory. These sets are kind of pricey, but a fun excuse to play Legos as an adult.  I only have some of the cheaper ones here, but Fallingwater and the Farnsworth House will be mine someday...

See you tomorrow, fellow nerd!
Posted by The Junior Junkie at 8:30 AM