Not every post can be a Bart. Sometimes there must be a Milhouse post, that being a post that is just a little (lot) bit nerdy. I happen to have a few such posts waiting in the wings, so I figure why not shoot them all over the Internet in a single week of unforgiveable nerdiness I am lazily referring to as “Nerd Week.” Enjoy! 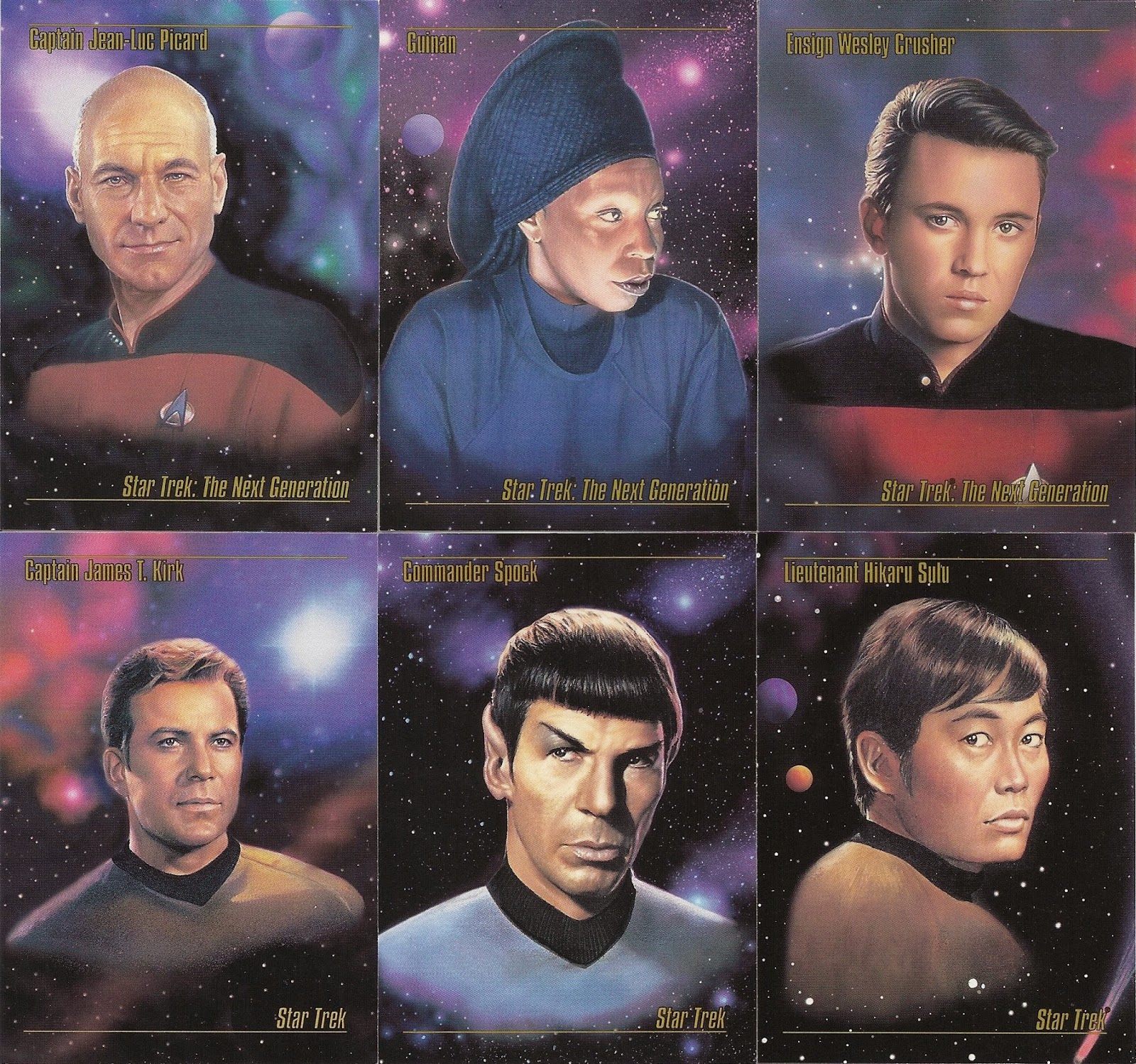 Today’s nerdy post is all about Star Trek, specifically a single set of cards I got from The Prowling Cat when he was cleaning out his closet all Eminem-style.  The set is called the Star Trek Master Series, and it was printed by SkyBox in 1993.  They are 90 really beautiful, finely-crafted cards that span the Star Trek Universe from the original series through Next Generation and ending just before the beginning Deep Space Nine. Personally I was most enamored with TNG, so these are right in my fandom wheelhouse.

The art is extremely solid, just stylized enough to not be considered one of those hyper-realistic paintings of a photograph which, while super neat, are kind of an artistic cop-out. The subjects are the principal characters, ships, races, aliens, and moments from the two series condensed nicely into a fan-friendly 90 cards. I mean “fan-friendly” in that the set is easy for fans of the shows to love. I’m sure there are a lot of fans who can spot glaring omissions from both series in the set. Those fans need to relax. These cards are excellent. 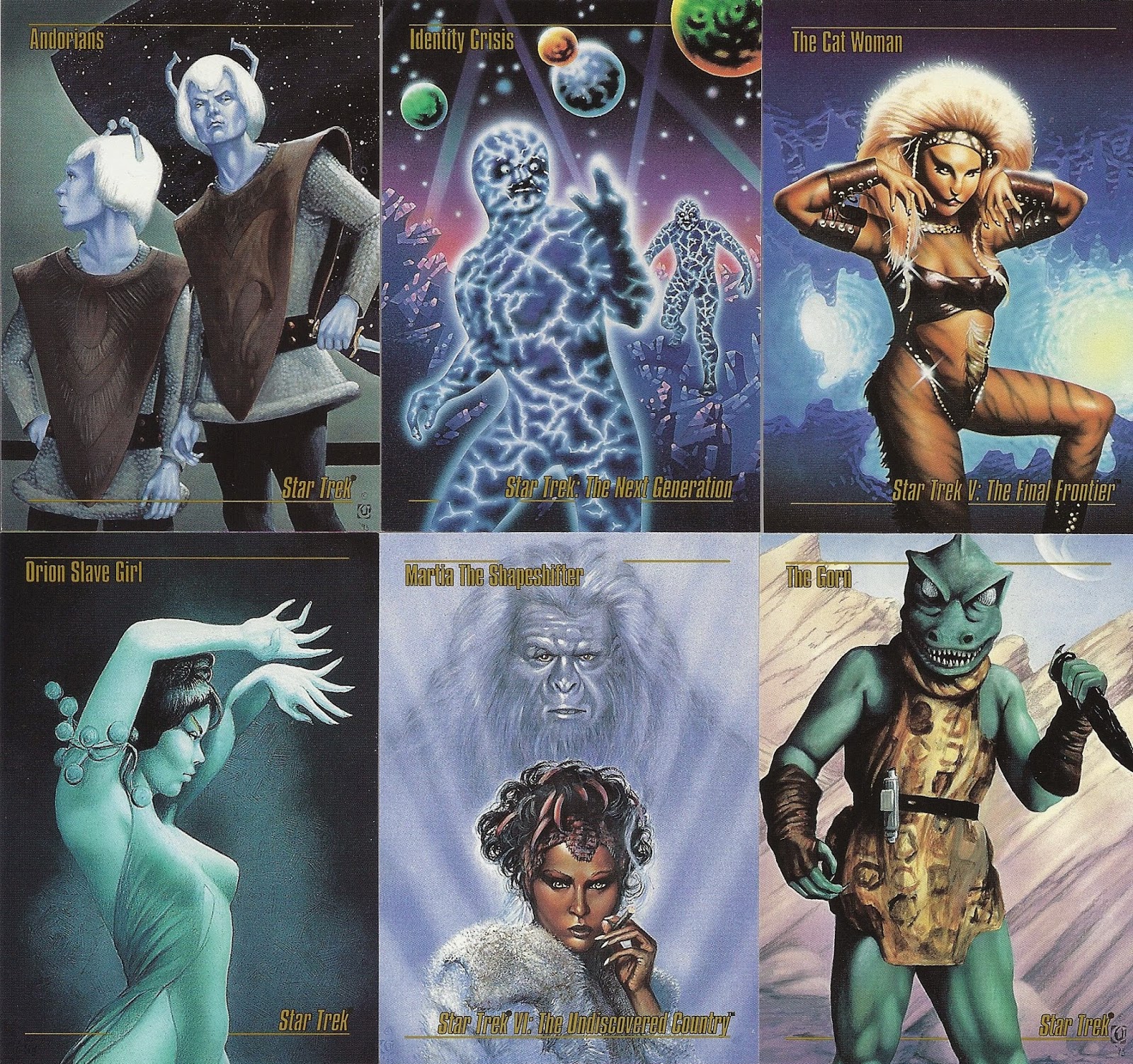 Okay, some of them are kind of silly, actually, but that's part of the charm.  And that Orion Slave Girl belongs in Maxim, or possibly my trunk.  Yowza. 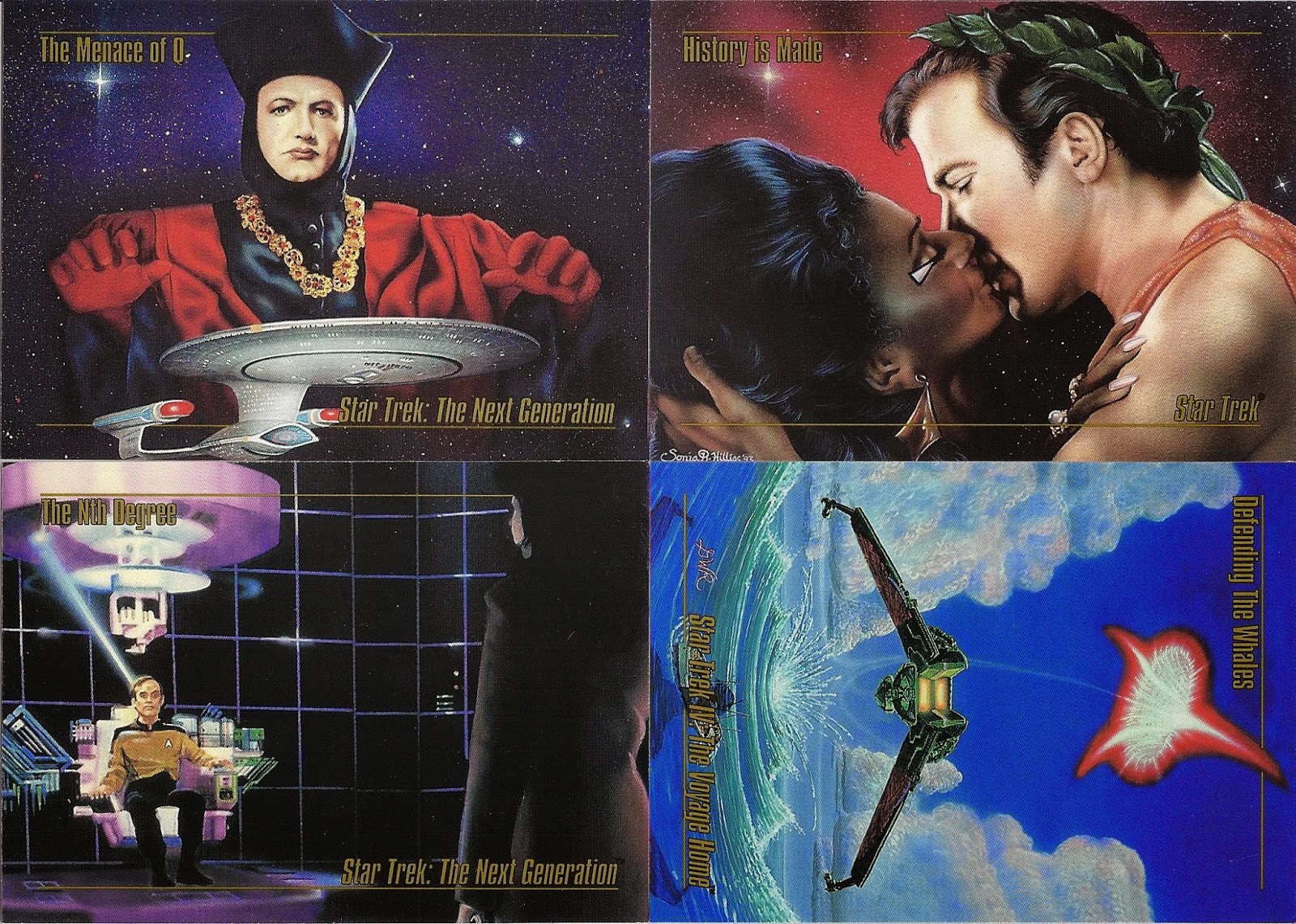 I've picked out a bunch of my favorites from the set to show you.  For example, that card of Reg after he took over the Enterprise from the Holodeck.  And they discover that race of beings who are essentially floating old man heads who are like, "Oh, bipedal motion!  Electrochemical nerve induction!" because they are super observant and stuff.  Great episode.  Also, Q's hat.

I should go ahead and mention I'll be showing a LOT of the TNG cards because they are my homies and because the set is very TNG-centric in general, probably because of its 1993-ness. 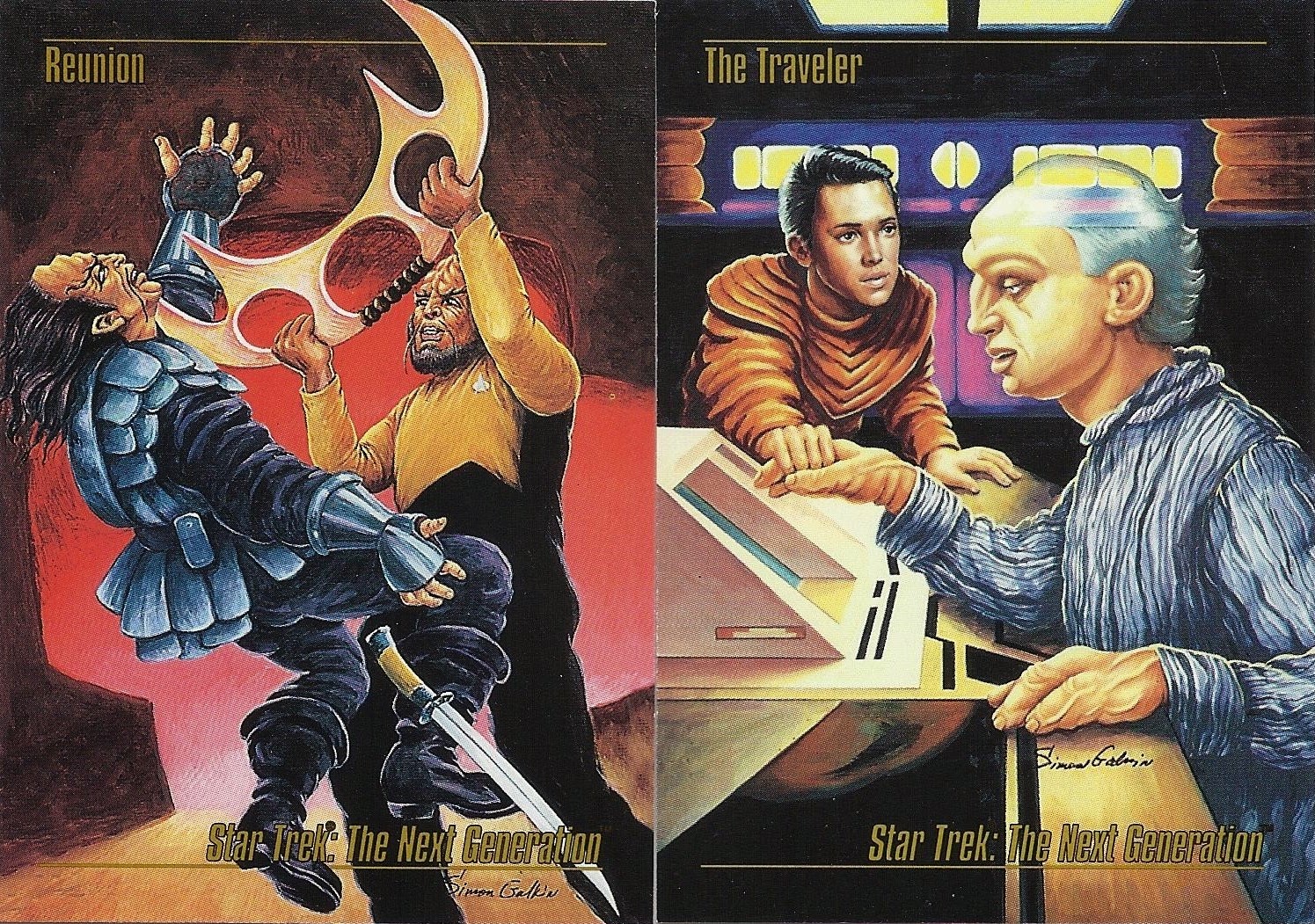 Check out the disproportionately massive bat'leth (spelling?) and the goofy depiction of the Traveller who is Wesley's magical best friend (seriously).  These cards a little silly, but the episodes they depict are damn good.  And I like The Traveller, no matter how much I poke fun.  He's in one of my favorite episodes, "Remember Me," which is a fun but disturbing mind-f***. 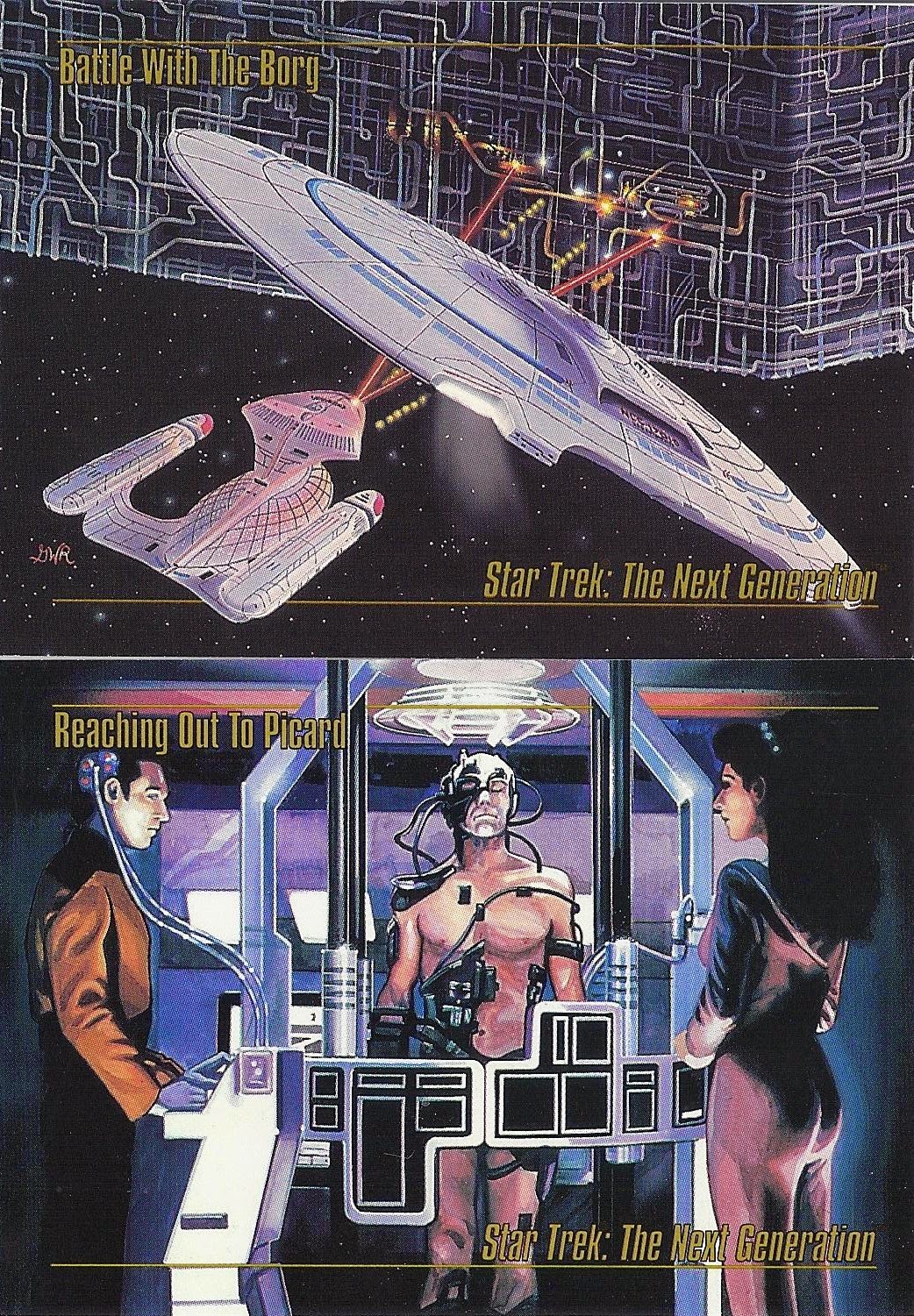 The Borg are referenced a lot because everybody just loves them.  They're kind of the perfect enemy, and their assimilation modifications gave us an excellent look at Picard's nipples. 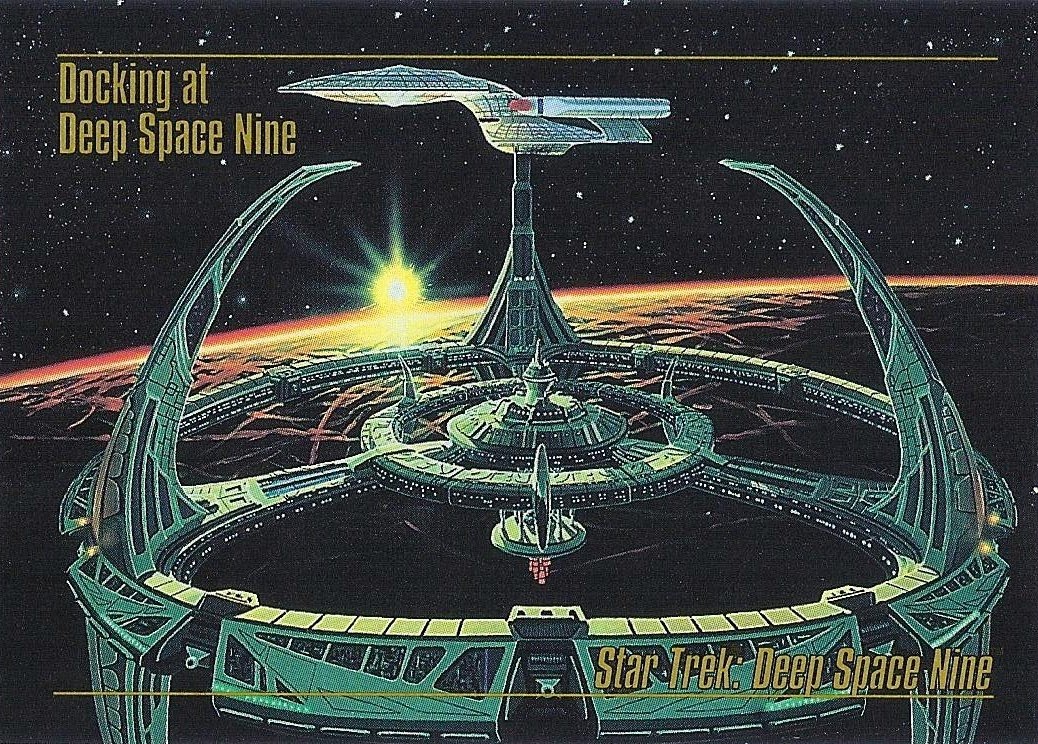 Shameless plug for the newest series, anyone?  I'll take it, but I never got as hard into that series as I was with TNG.  This card would be a whole lot neater if they got the proportions and angle of view right. 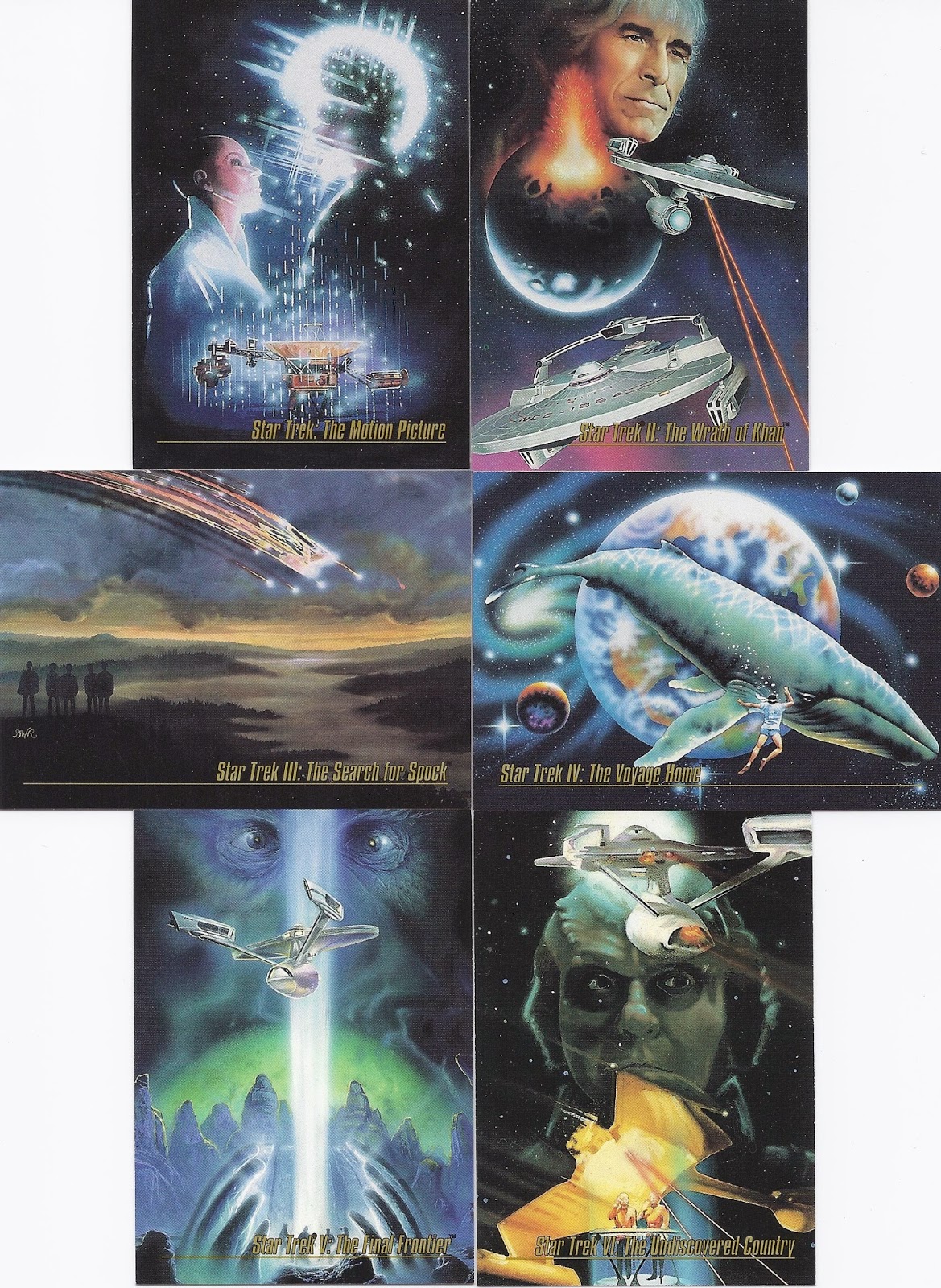 Finally, here are all the "Theatrical" cards.  The set must have come out just before the TNG movies started coming out, the first of which was Generations.  If you haven't seen the original Star Trek movies, go ahead and give 'em a try, but skip the first one.  If you get really into them, go back and watch.  The story is pretty cool, but it's a terrible first outing,

According to the checklist there are five "Spectra" cards to be had as well as some artist-signed editions of a dozen or so cards from the set.  Do I want all those?  I mean, yeah.  I guess I do.  This is nerd week.  I can admit to that.

If you're a Trek fan, you should probably watch this:

Thanks again for the cards, TPC, and see you tomorrow, fellow nerds!
Posted by The Junior Junkie at 8:30 AM