So my wife says to me the other day, “You’ve turned me into a nerd!” I was taken aback to say the least, but once she elaborated a little I realized just how true this was. When we met in college my wife was coming from being a popular “jock” of sorts in high school. She ate at Chili’s, drank light beer, and listened to whatever awful nonsense was on the radio at the time.

Now she sips pho and eats salmon sashimi like a champ. She’s seen every episode of Star Trek:TNG and read the entire Ender’s Game series, including the Bean subseries. And she’s seen Neutral Milk Hotel in concert. It’s true – I turned my wife into a nerd, and she loves it.

That conversation was the real catalyst for this series of posts. It made me realize just how much of a nerd I had become, and just how awesome that was. It’s not like I even try and hide it, really. A quick walk around my house will reveal just how big a nerd you are dealing with: 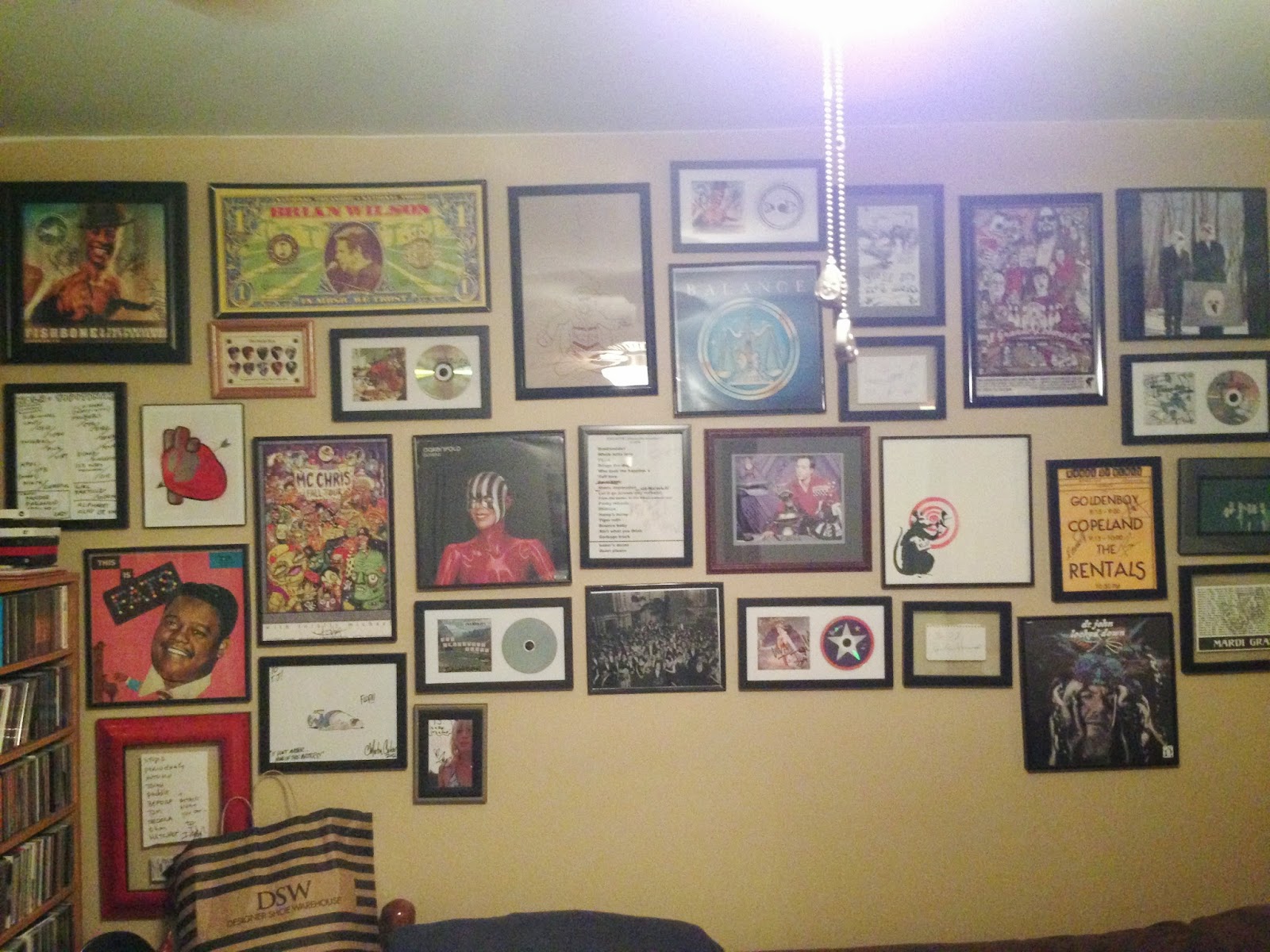 For example, I have an autograph collection, and the majority of the music-related ones end up on this wall. There’s plenty of not-nerdy items here in addition to a healthy mix from across the nerd spectrum:

Not all that nerdy: Brian Wilson, Dr. John, Herbie Hancock, Galactic, Fishbone
Pretty nerdy: Yo La Tengo, Grandaddy, The Refreshments, The Rentals
Indisputably nerdy: MC Chris, They Might Be Giants

There’s also a framed photo from when I got to interview Flansburgh, the bespectacled John of They Might Be Giants. Digital photography either didn’t exist back then or it was very expensive, so the photo is super grainy and my eyes are closed. :-(

My autographs get a lot nerdier as you leave the music realm and enter the Comic Con realm: 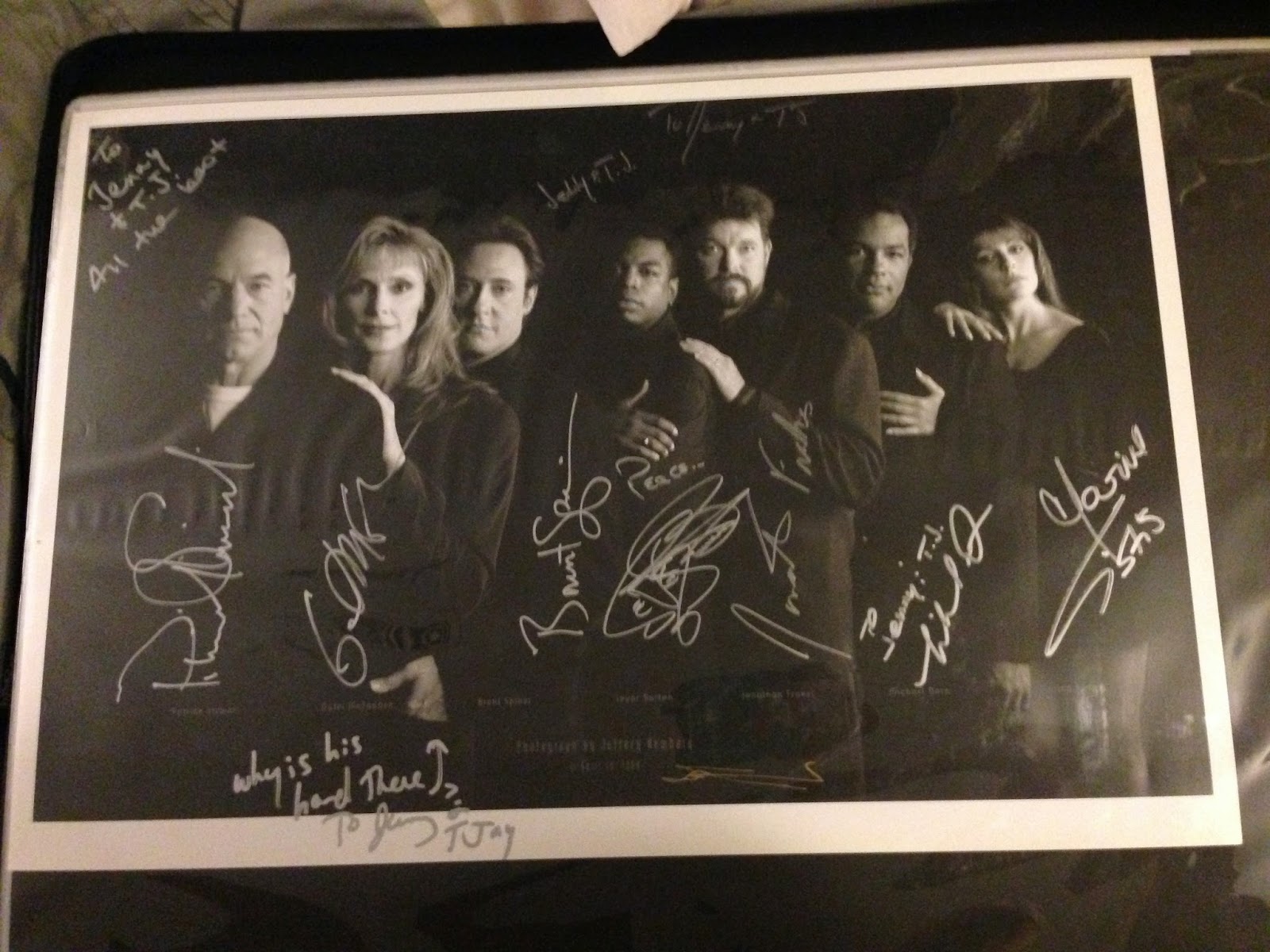 My wife got me the Star Trek:TNG VIP experience at Comic Con last year. I met everybody except for Patrick Stewart who was in Canada narrating a documentary. He was nice enough to sign everybody’s poster, but he didn’t make the group photo my wife and I got to take with the entire cast. I will not be showing that photo here because it would melt your screen. Here’s a funny tidbit from the signings: 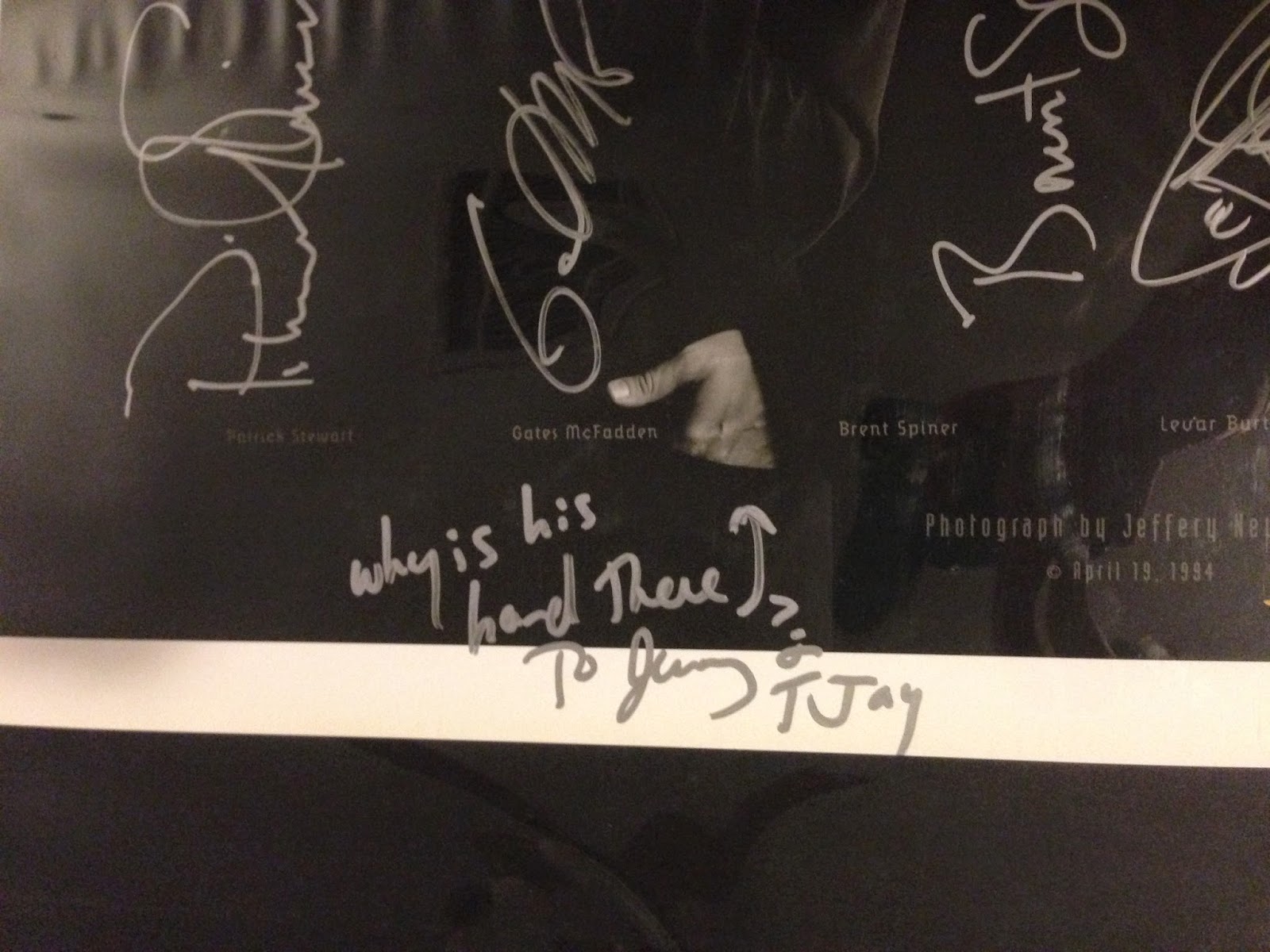 Crusher’s hand is in Picard’s pocket in the poster photo, and she apparently did not remember that until seeing the poster so she wrote this fun little remark. Super nice lady, too. All of them were really cool. I especially enjoyed talking to John Delancey who played Q (you can see his sig in gold on the bottom) as well as Marina Sirtis and Levar Burton. 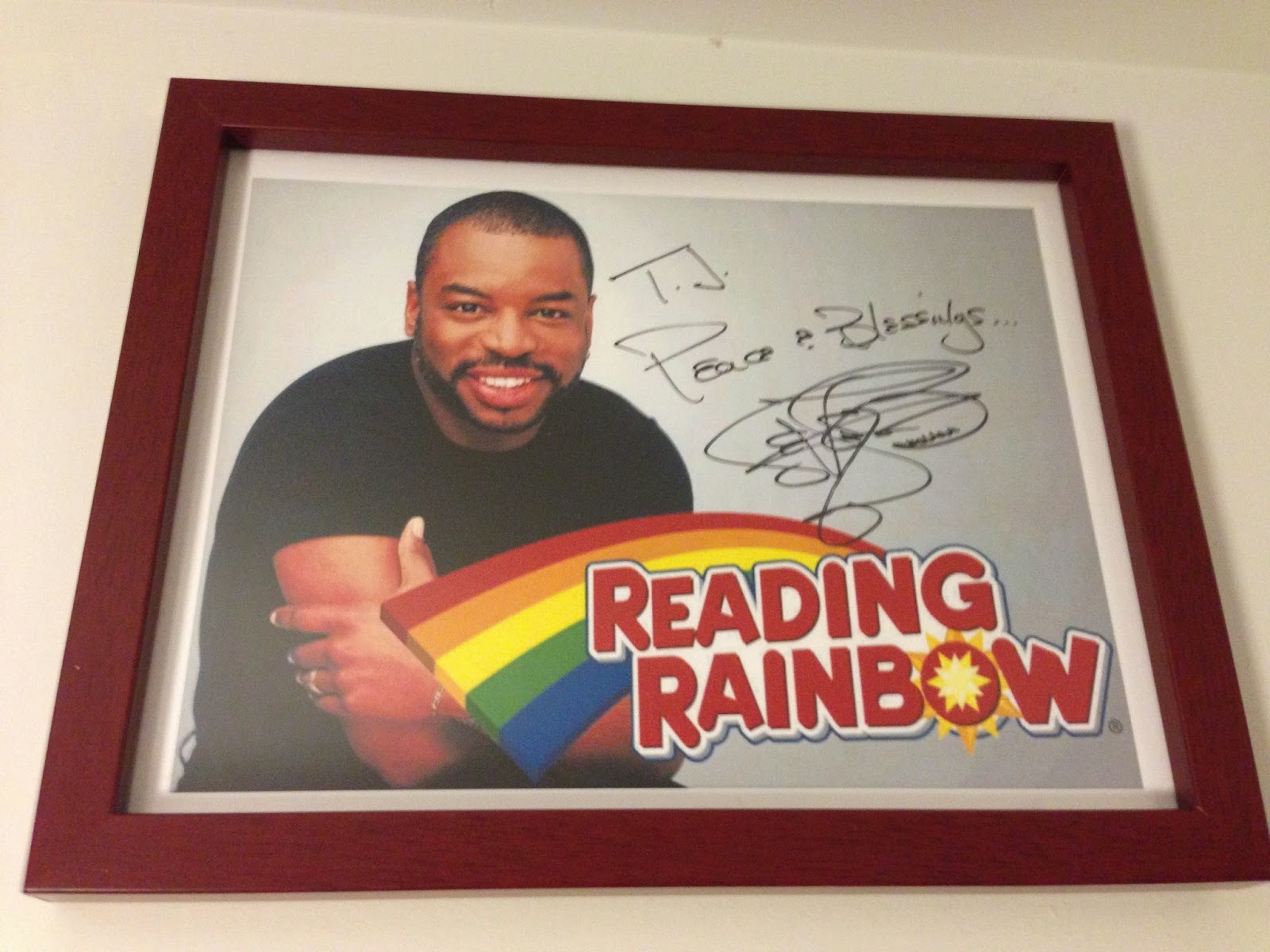 Grabbed one of these, too. Levar was a smiley delight, but try fitting that signature on a 2x3 card.  Or a sticker for that matter.  Can you imagine? 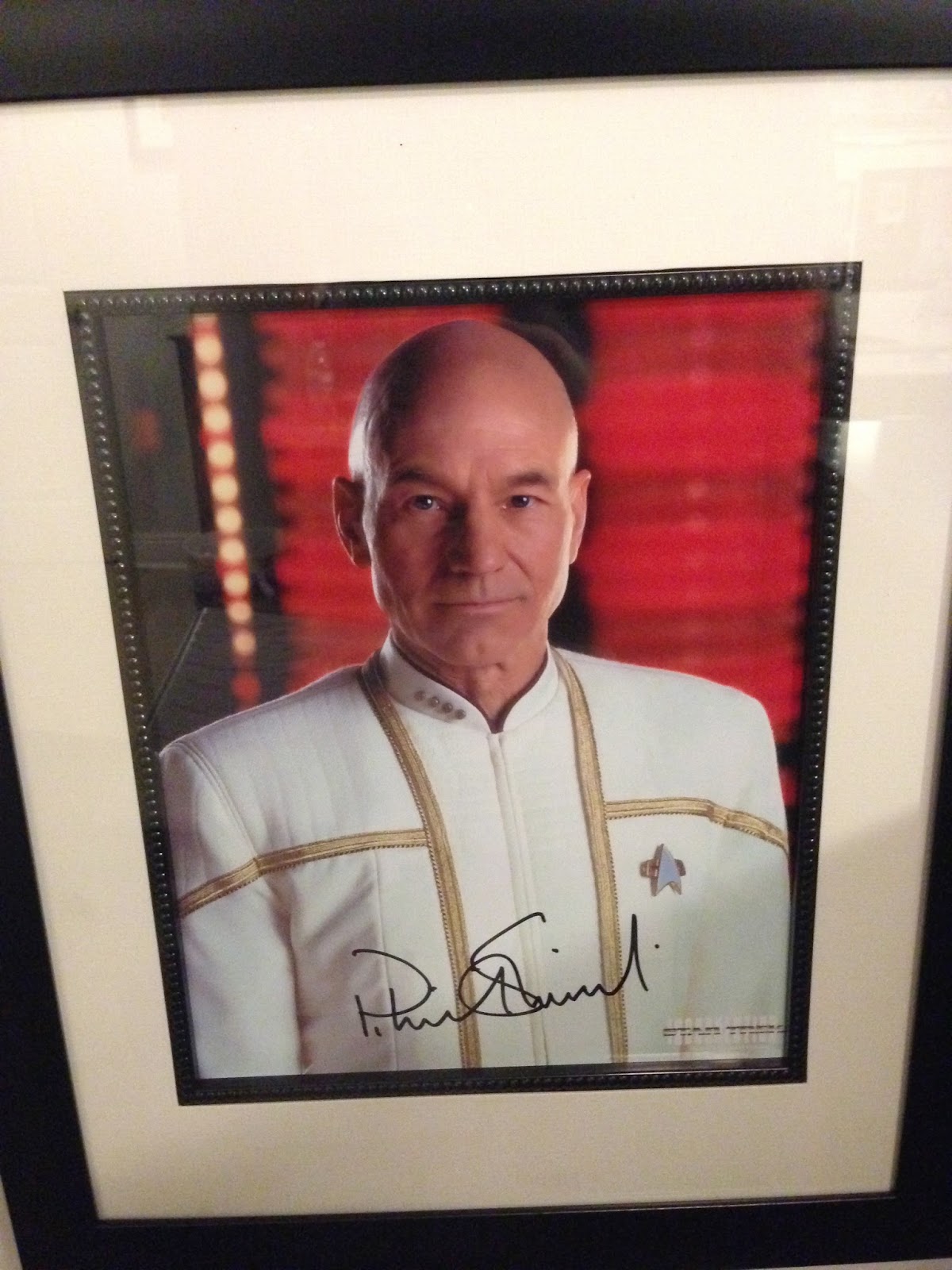 In case you’re not sick of Star Trek yet, the folks who ran the Con sent out an e-mail about the VIP package stating that it included a signed 8x10 of Patrick Stewart. I printed that baby out, and when I got to the Con the people in charge insisted that it was an error but let me pick one out, anyway. So, here’s Picard in his dress whites. Can you feel the nerd tonight? 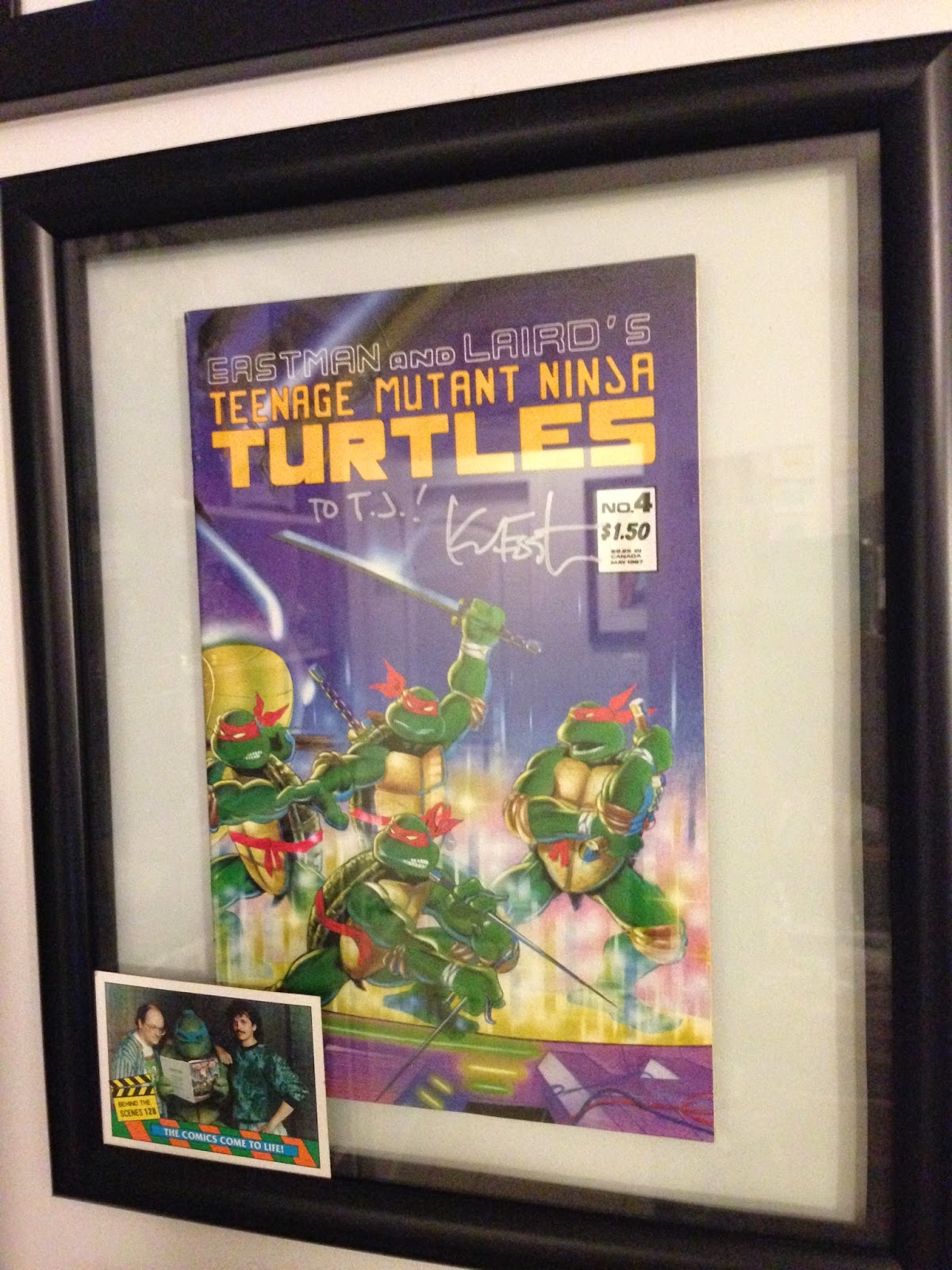 I also met Kevin Eastman who was the friendliest, most accommodating person at the con. He even did some doodles for people if they were willing to wait in the crazy-long doodle line. I had nerdier places to be, so I got the fast-track “To T.J.” 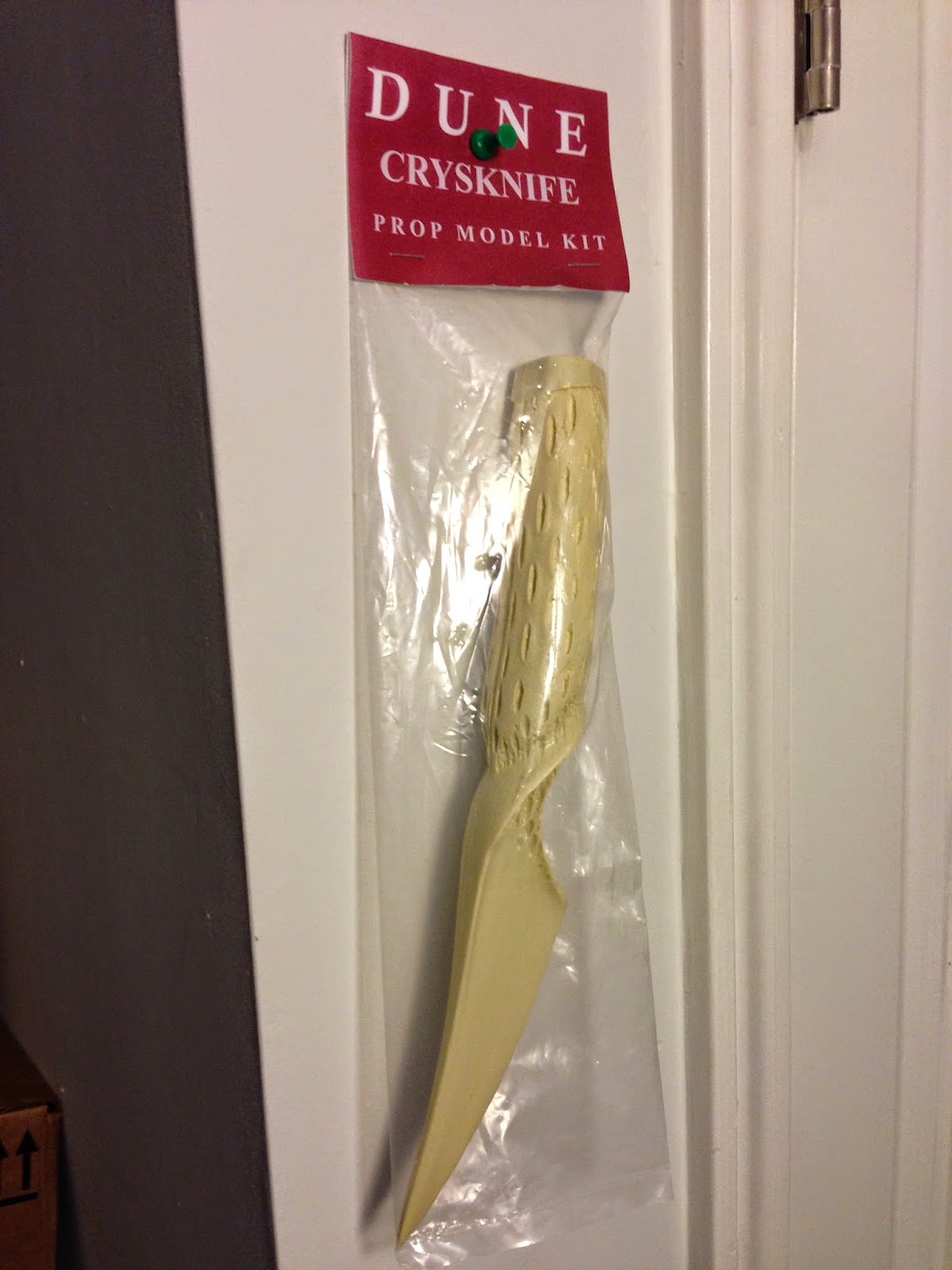 One more Comic Con item: a scale model of the Arrakis Crysknife made from the tooth of the mighty worm. Spolier alert: the worm is the spice. Nerdgasm.

That’s it for the Comic Con stuff. Lucky for you (or possibly unlucky) I took a few minutes walking around my house looking for more things that are nerdy. I took a picture of the nerd-things as I found them. Here are a few of those pictures: 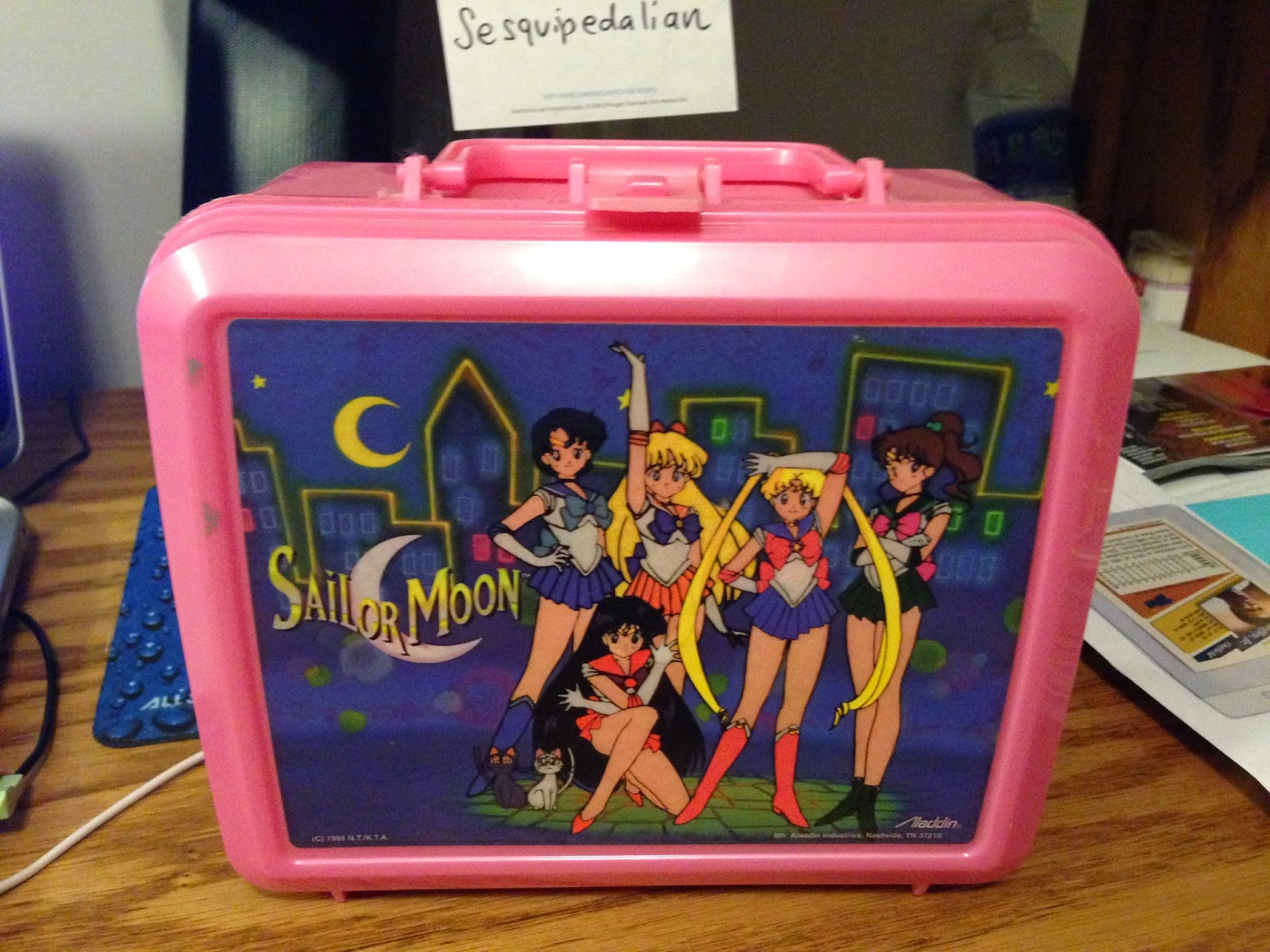 This is a Sailor Moon lunchbox. That’s pretty damn nerdy. What’s inside? 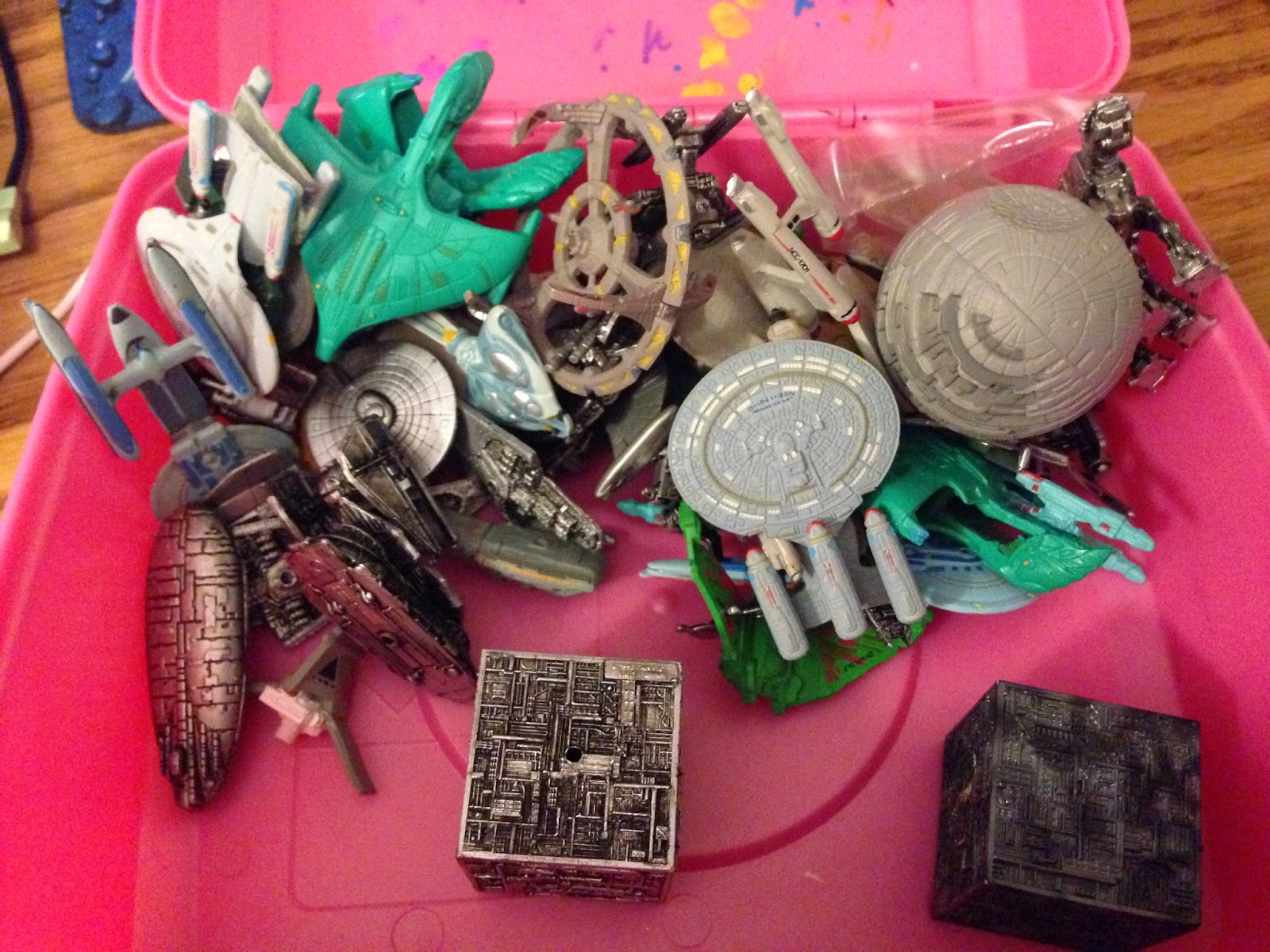 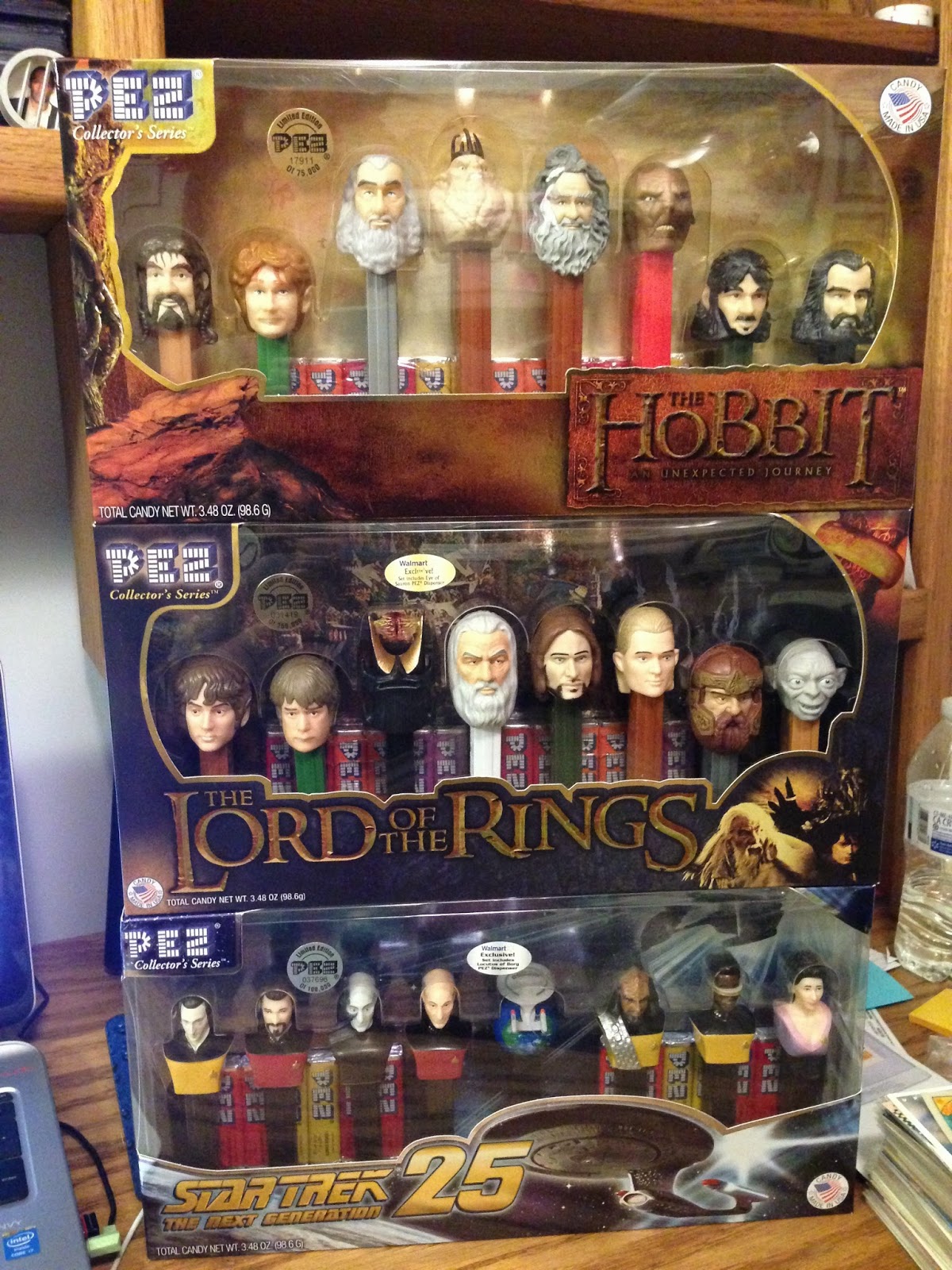 Okay, these were all gifts. Friends and family all know I’m a “collector of collections," but I’ve never been a big Pez dispenser guy even though I love the candy. Yet, here they are, mass-produced to the point of being worthless as a collectable. Still, I kinda like them as a big, sealed set, being a nerd and all. 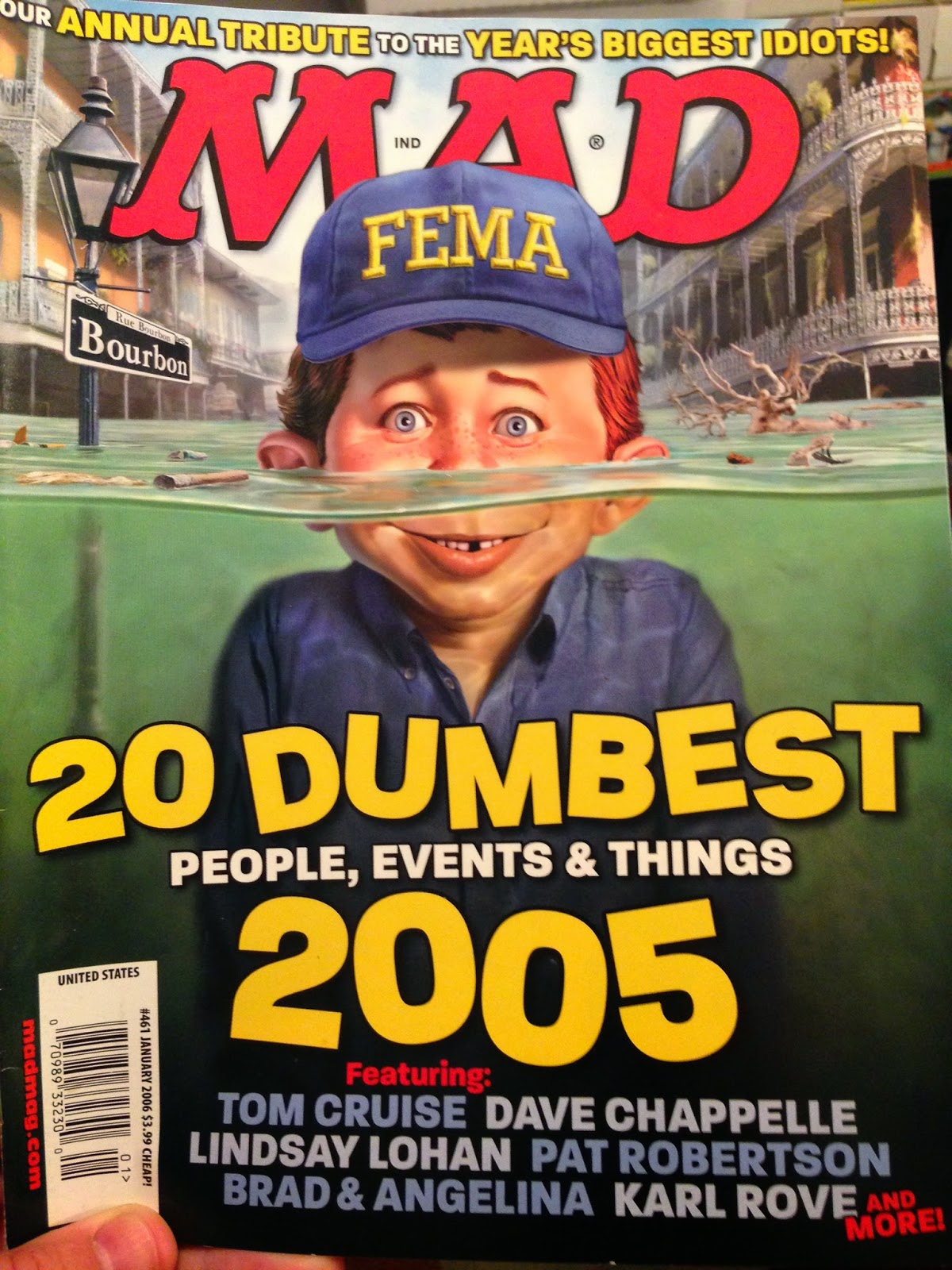 I still have every Mad Magazine my Mom ever bought me at the supermarket. This one I bought long after I stopped reading the magazine just for the cover. Was Mad nerdy or cool? I can’t remember… 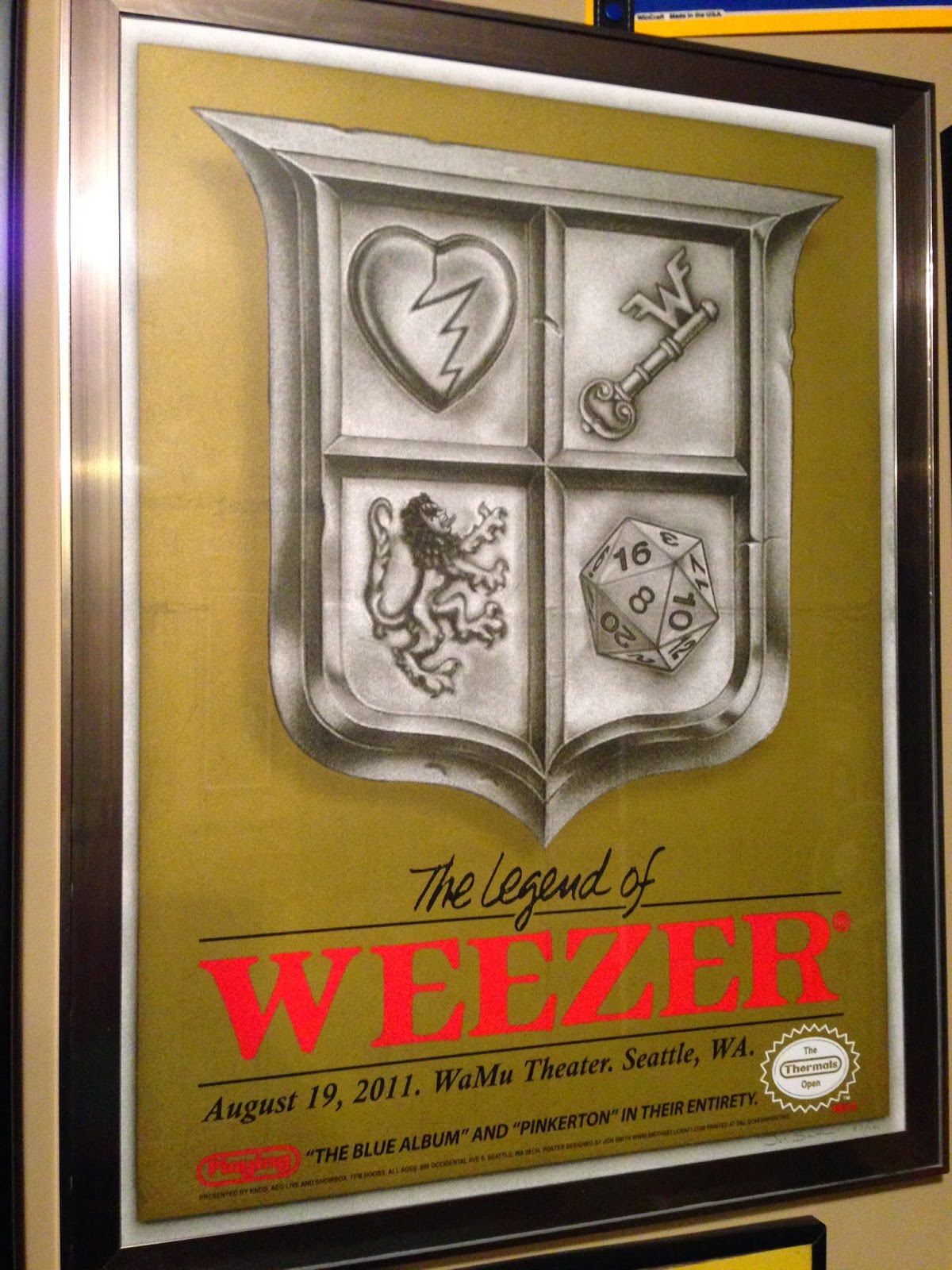 This poster is several levels of nerdy, but if you’re a nerd it’s several levels of awesome. My only gripe is that it shows a 20-sided die while the song references a 12-sided one. Other than that, it’s pretty amazing.  And yet... 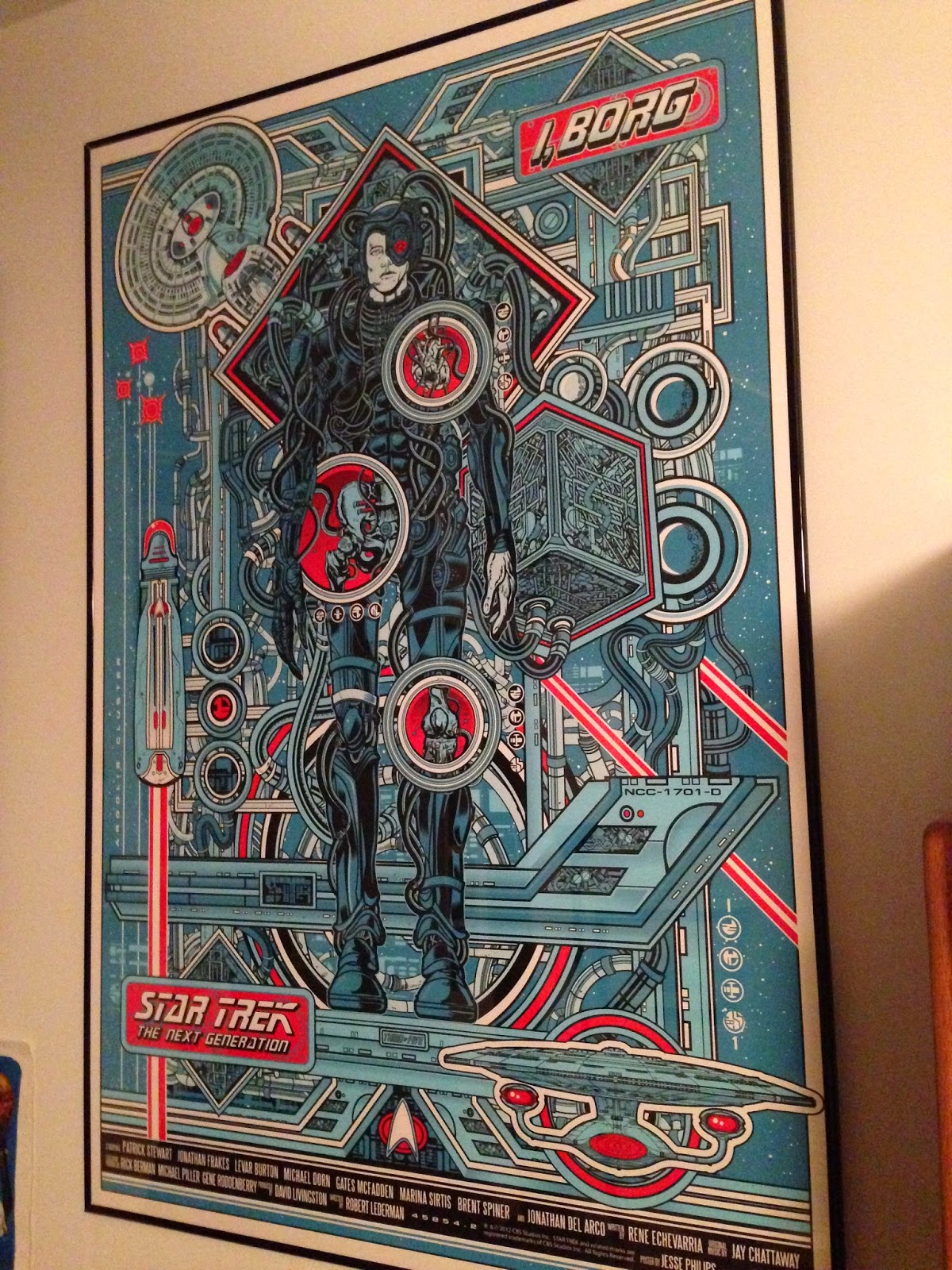 ...this puppy takes the prize as my nerdiest poster not signed by the cast of Star Trek.  It hangs in my office as opposed to somewhere my wife could see it.  It's just too damn nerdy for that girl. 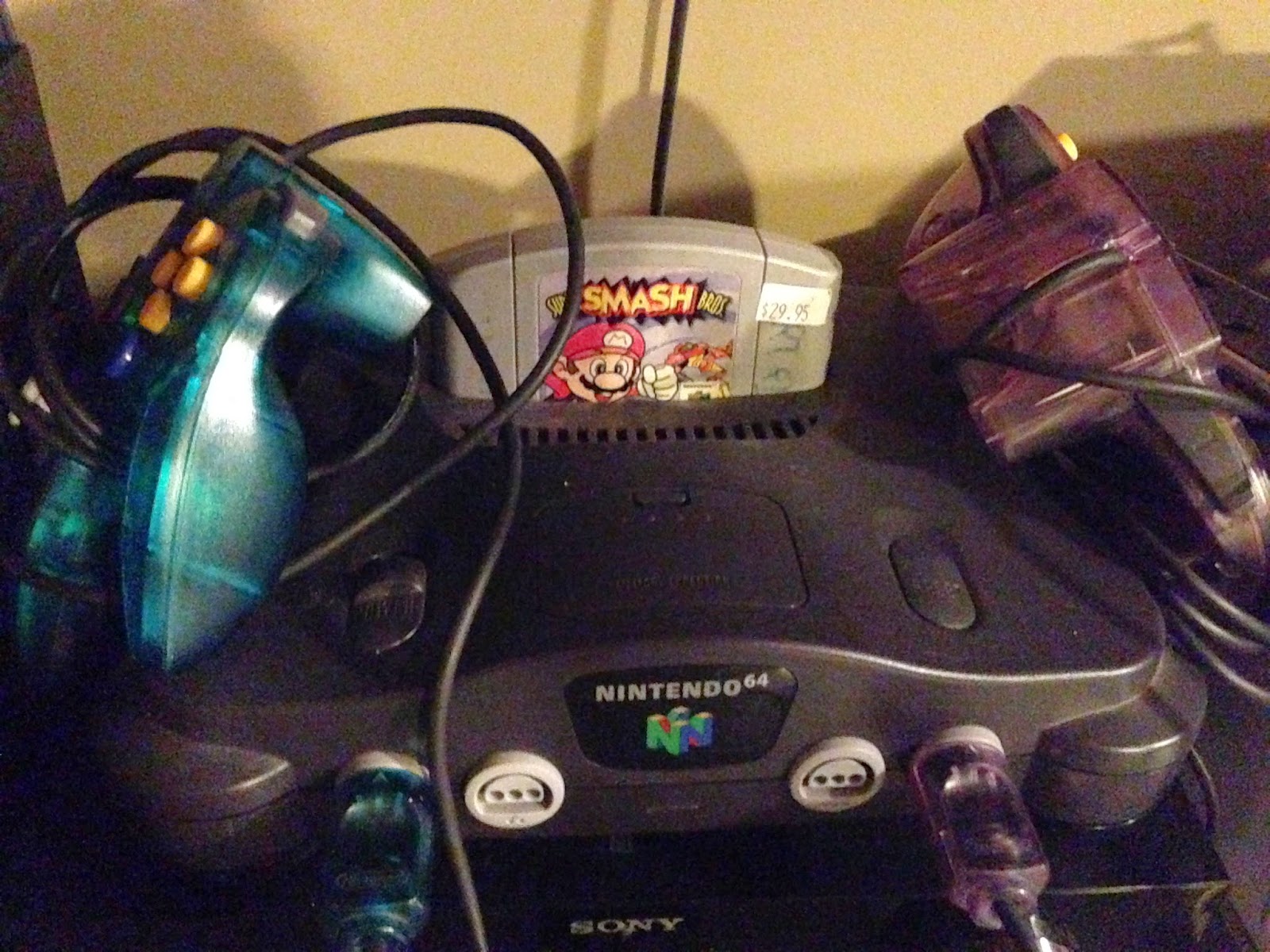 This lives in the man cave with four controllers, always ready for battle. This cartridge along with my Portal 2 disc are in a tie for second place as my most-played video games (Civilization takes that prize #nerdbasedstrategy). 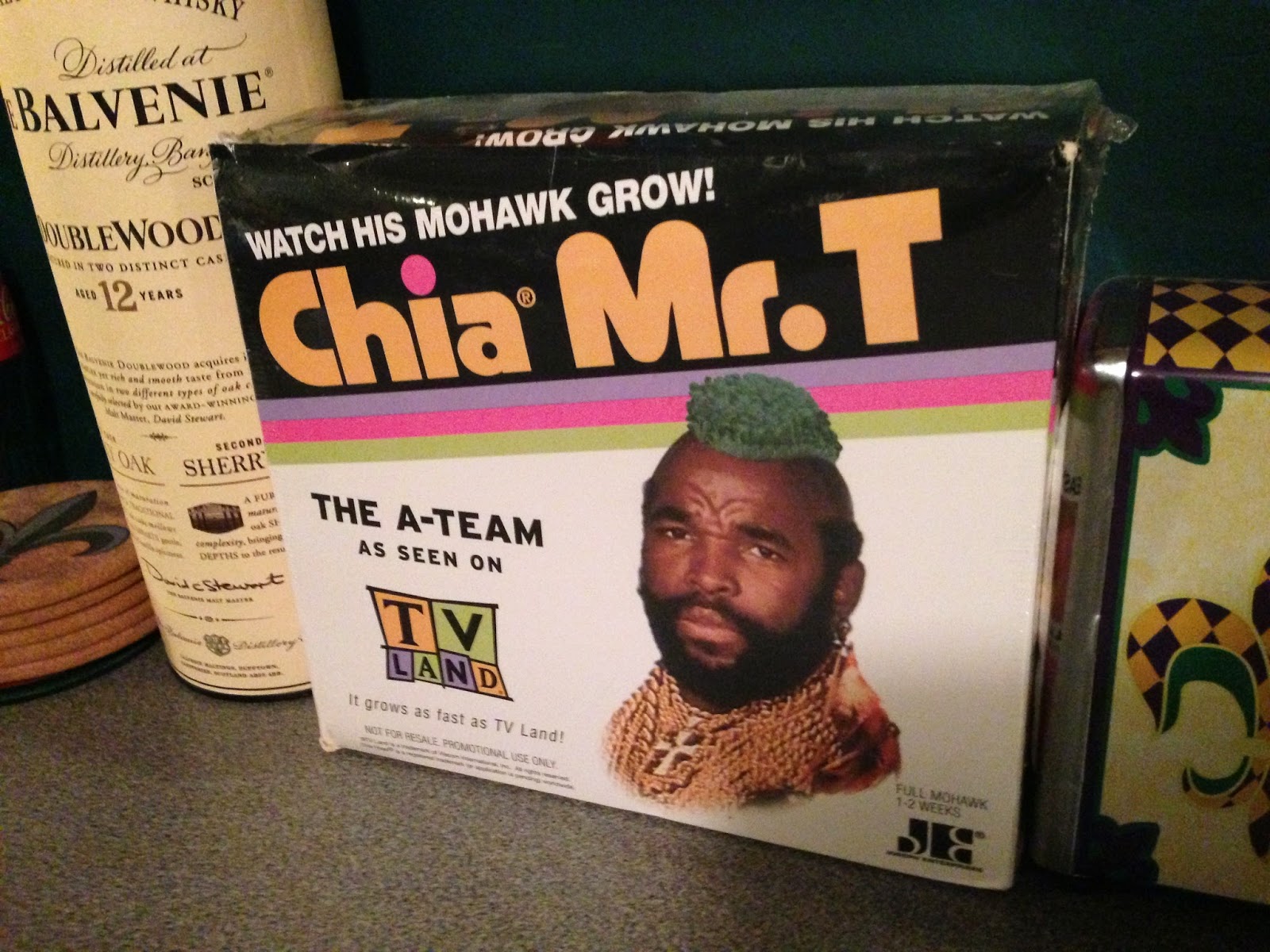 I pity the fool who don’t celebrate his own nerdiness with a blog post! This is nerdy even for me, but don’t deny it: you want one. 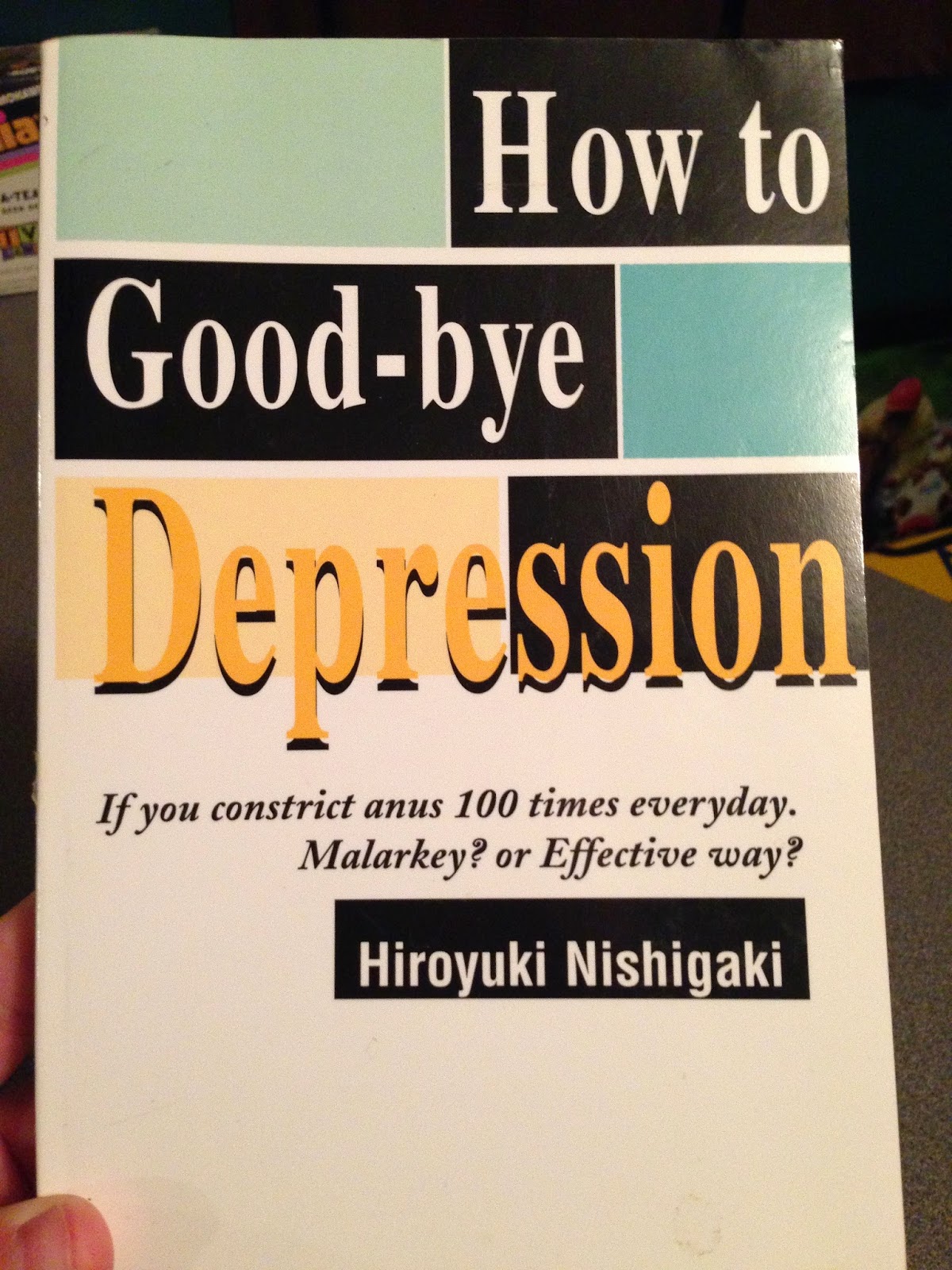 I’m not sure if this is nerdy or just insane. Leaning towards insane. Like, certifiable. But if you ever get the chance to read what this book is made up of, its inherent nerdiness will reveal itself.  (Note: I've tried it.  Doesn't work.) 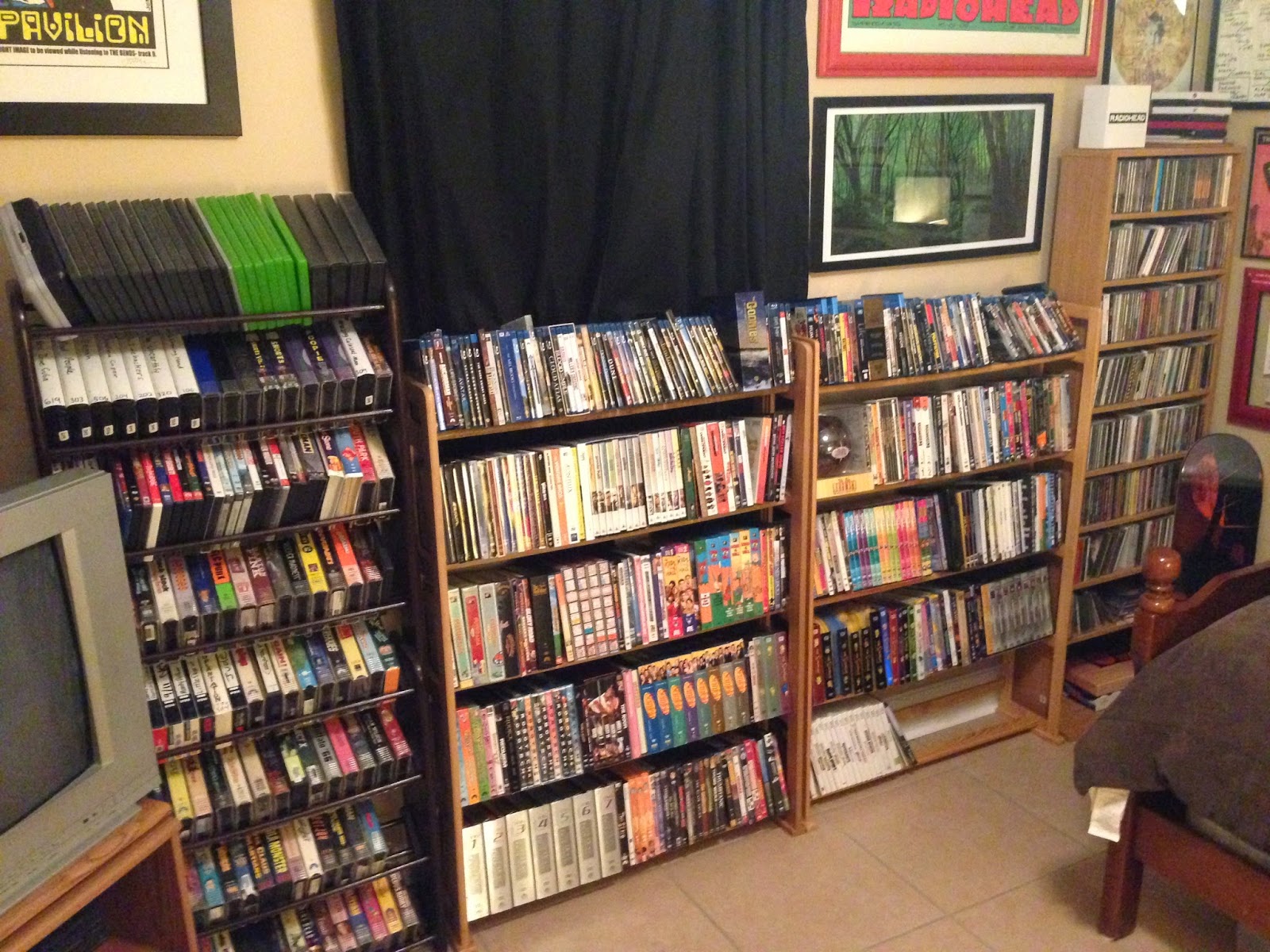 This is my media wall which resides in our spare bedroom. It used to be two walls and take up a LOT more space. I was strongly encouraged by my betrothed to downsize this collection, so what you’re looking at is about 20% of my former VHS collection, 40% of my CD’s, and about half of my DVD’s. While most of that stuff went to Goodwill, I still have all the DVD’s in bins at a friend’s house. A respectable media collection is one of the hallmarks of a nerdy collector. 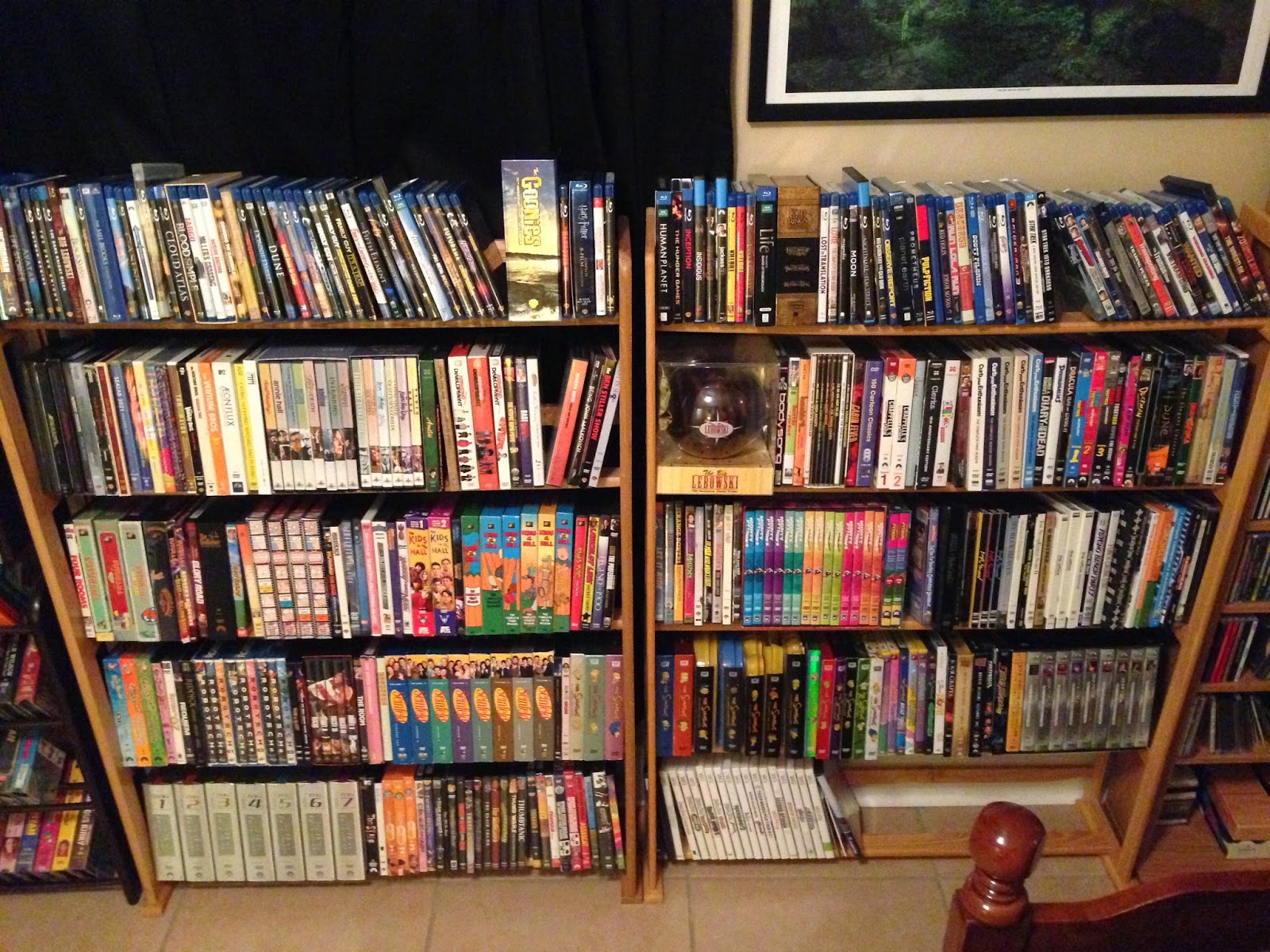 Here’s a closer look at the DVD’s in case you feel like judging my taste. Frankly the DVD selection is one of my favorite things to look at when I go to parties at other peoples’ houses. It’s amazing the things you’ll discover, particularly that a lot of people like bad movies. 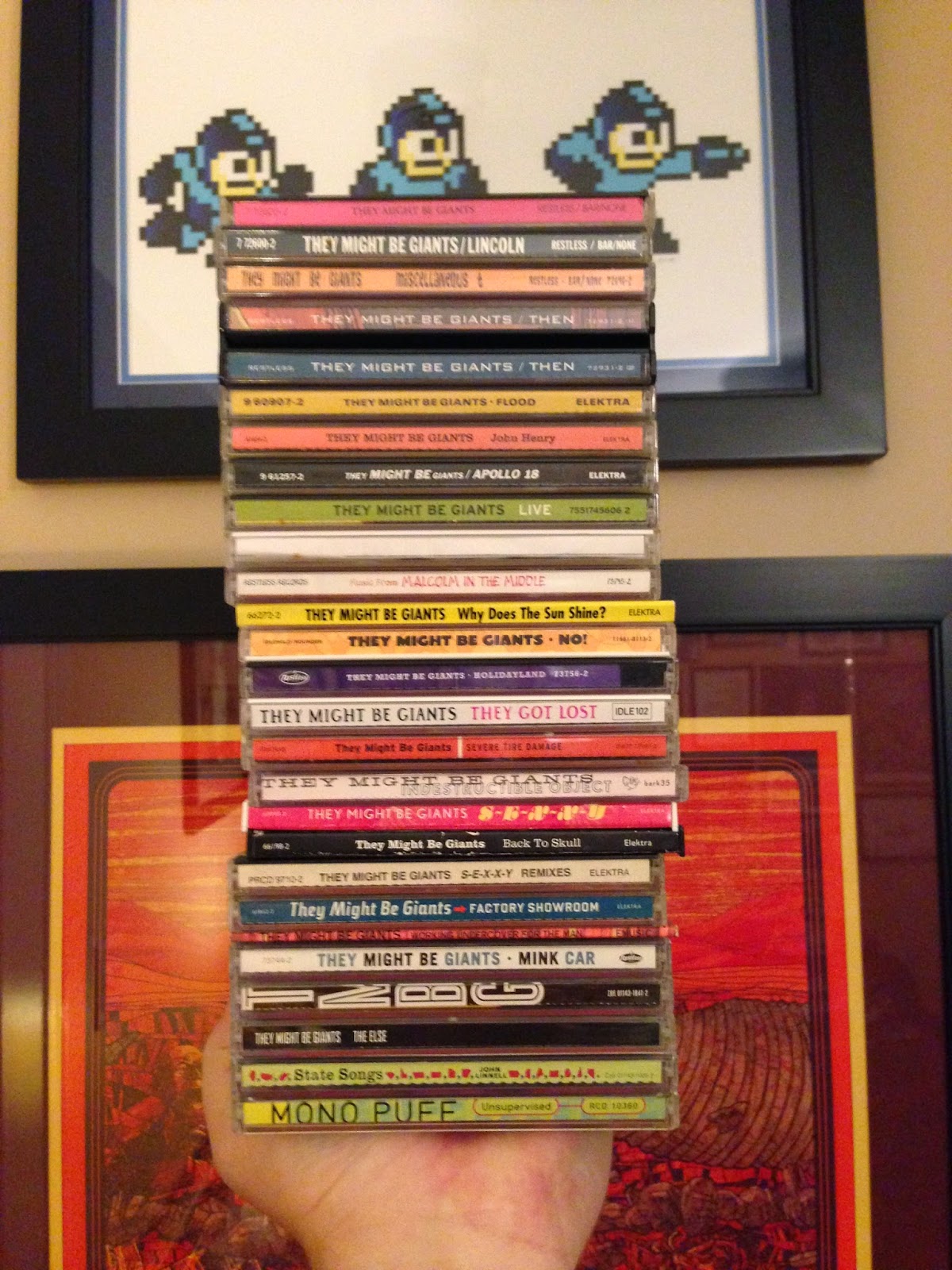 This is the They Might Be Giants portion of the CD collection. They do not have the most CD's of any band on those shelves (I have more of both Radiohead and the Beach Boys); but they do have the most discs represented of any nerdy band I love, so I thought they’d be appropriate for this post. I also have similar stacks for Yo La Tengo, The Magnetic Fields, and Grandaddy. Nerdy music rules.

Finally: I am the author of a baseball card blog. This is arguably my nerdiest attribute (right up there with that Sailor Moon lunchbox), but it’s also ridiculously fun. It’s tied to sports which is like the least nerdy thing there is, but it’s also tied to statistics which is widely regarded as – you guessed it – pretty nerdy, y’all. The result is an interesting mix of nerds, jocks, and everyone in between chasing the same cards, and some of them bothering to pen a word or two about them. That’s where I (and some of you) come in. Card bloggers are very much a form of nerd, and yet they’re some of the coolest people I know.

Now, this and previous posts could be construed as gloating. “Hey, look at my stuff! You jelly?” But keep in mind that I never would have shown people this stuff ten years ago, and fifteen years ago I would have buried my head in the sand if I knew a girl might see what I collect (girls were scary).

And yet there’s a certain amount of comfort in one’s identity and confidence of character that comes along with growing up. I guess that’s what these posts are really about. I’ve always considered myself a reasonably cool dude who happens to like nerdy things, but to heck with that. I’m clearly a nerd. In fact I’m damn proud to be a nerd, and you should be, too.

Kids seem a little more tolerant of nerds these days than when I was in school, and why shouldn’t they be? Nerds have higher average incomes, tend to be well-educated and well-spoken, can hold informed conversations, know how to do stuff (besides fix your computer), respect the warning of “spoiler alert” better than anyone, and most importantly they have the best taste in music, film, art, food, and t-shirts. Plus nerd girls are so much cuter than your run-of-the-mill sorority chicks it’s not even funny.


So in honor of nerds everywhere, I’m having a giveaway. I want to see the nerdiest thing you have. One item only, please. It can be an object, a tattoo, a book, a poster, a signed photo, a vinyl record, a report card, a ridiculous Lego creation, a fluffy cat sweater – whatever. A thing that announces to the world, “I am a nerd, world, and you can suck it.”

Here is the prize: 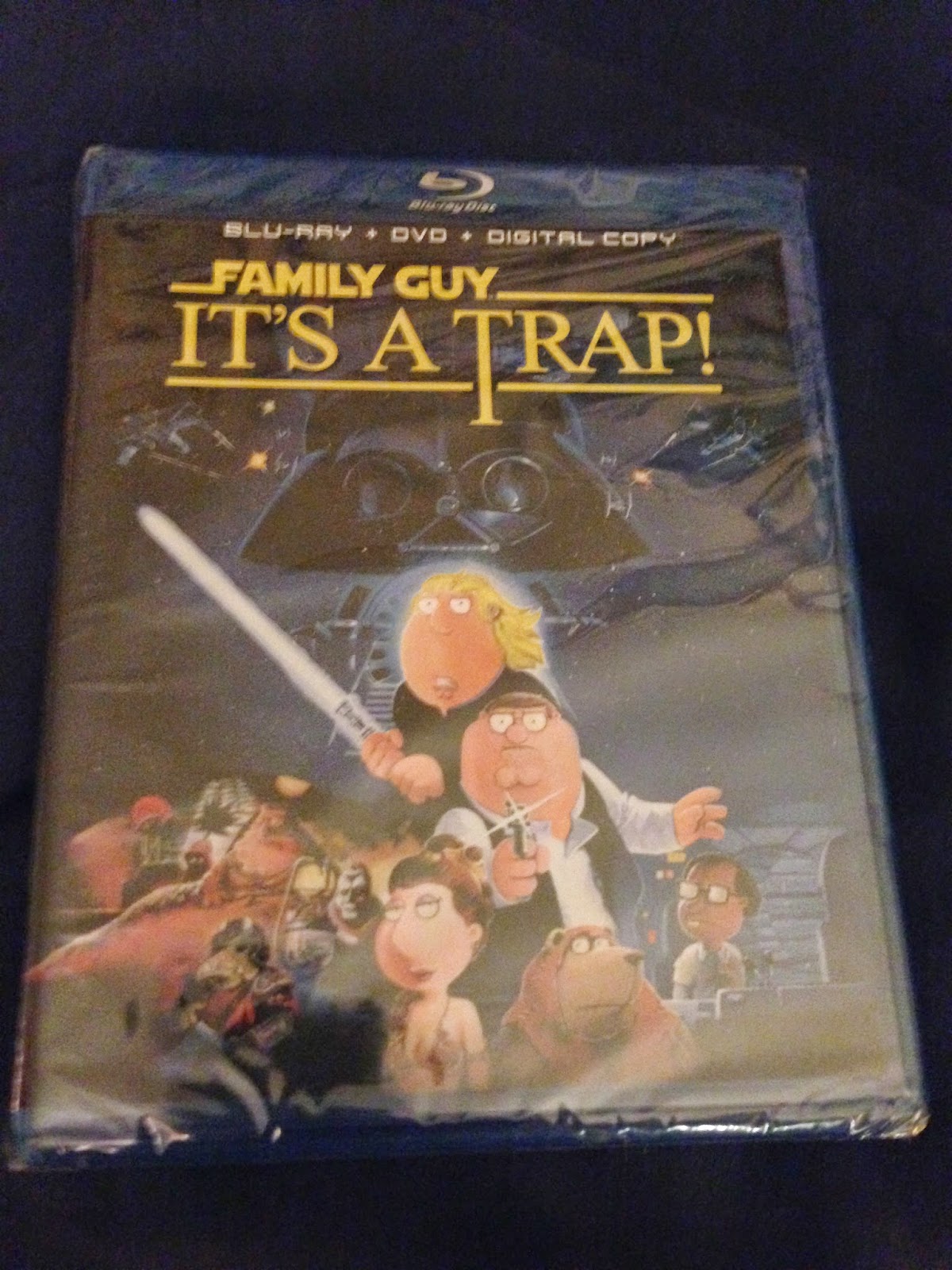 A sealed blu-ray of the final installment of the Family Guy Star Wars homages. I will also throw in other nerdy things and some baseball cards if that’s your thing (which it probably is if you found your way here, ya big nerd).

You can either make your own blog post about your nerd thing and link to it in the comments below, or you can e-mail me a photo at thejuniorjunkie at gmail dot com. Either is fine. If you include multiple images in either method, I will accept the first image by default unless another is indicated as your entry. No shyness. I will be showing some of them in a future post.

So let your freak flag fly, blogosphere. Keep calm, and nerd on. 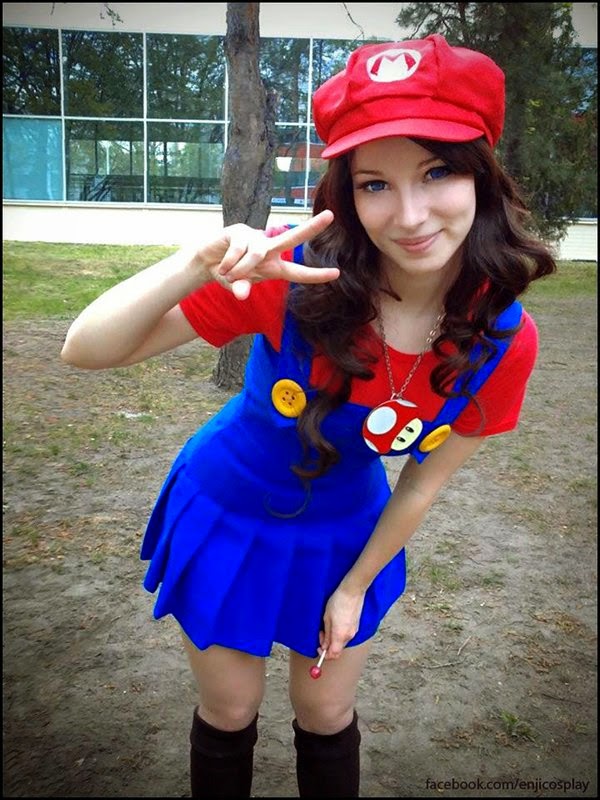