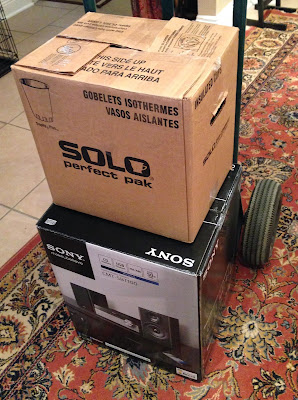 This is 40,000 baseball cards. I've been struggling with a game plan for getting them out of my house. My wife wants me to throw them in the trash, but I refuse on principle. Recently it's become more of an issue, and it’s time to get serious. Publicly serious.

So over the next few months I’m going to give them all away...

I’m not going to go around handing baseball cards to strangers - that’s just weird. This is going to be far more subtle. I plan on keeping a few hundred cards in the car at all times. From there, whenever we are out and about I will place cards one at a time in random openly-visible locations around the Earth, mostly in the New Orleans Metropolitan Area. From there the card will go where the world takes it. People can take the card and keep it, toss it in the trash, or ignore it altogether.

Regardless of what happens to the card, it’s got to be more exciting than sitting in a pile with 39,999 other cards collecting dust in my garage.

I don't want to simply throw cards at the general public. I want folks to feel like they found something special. To this point I’m making use of my trusty custom-made Mariners logo stamp to mark (um, ruin) every card. I’ll also be initialing each card back on either side of the stamp with “JJ” as I've done with so many trade packages before. But that’s not all.

To add a sliver of mystery and uniqueness to the whole project, I will also be numbering every card I send out into the world from 1 to Infinity. There is no real order to the cards - I simply grab stacks from the gigantic pile of junk (I've come across a few HOFers in there, too) and start defacing the backs, numbering as I go. Which cards get which numbers is totally random (or “totes rando” as the kids say). The owner of card #1 is going to feel pretty special if this thing gets up into the thousands, and as hard-headed as I am I can’t imagine why it wouldn't.

I also want this to be somewhat interactive for the finder, so I've created a hashtag, #RandomActsOfCardness. I've printed up a bunch of stickers (at work - shhhh....) with that hashtag and started sticking them on the card backs so people can tweet their finds. This is either clever and fun or pathetically nerdy.


How will I find the time to stamp, initial, number, and sticker all these cards? We have a movie night with friends once a week. This past week it was “The Babadook,” and while watching the film I prepped a whopping 200 cards in less than 30 minutes. These cards are in my car now, ready to be distributed to fun and interesting locations around the city for people to find. I have a few ideas of where to leave them, but I have a funny feeling many are going to end up in various New Orleans dive bar restrooms.


We are attending a birthday celebration this week at a popular bar uptown, and I will be distributing the first 20 or so cards into circulation there one at a time in random spots. I'll also be monitoring the Twitter feed to see if anyone actually reads the sticker.

I’m curious what the sudden influx of cardboard into the public sphere will do. Will some folks start collecting? Will I get a littering fine? Will people think it a nuisance or an art project? An act of generosity or cardboard terrorism? Time will tell.
Posted by The Junior Junkie at 12:22 AM